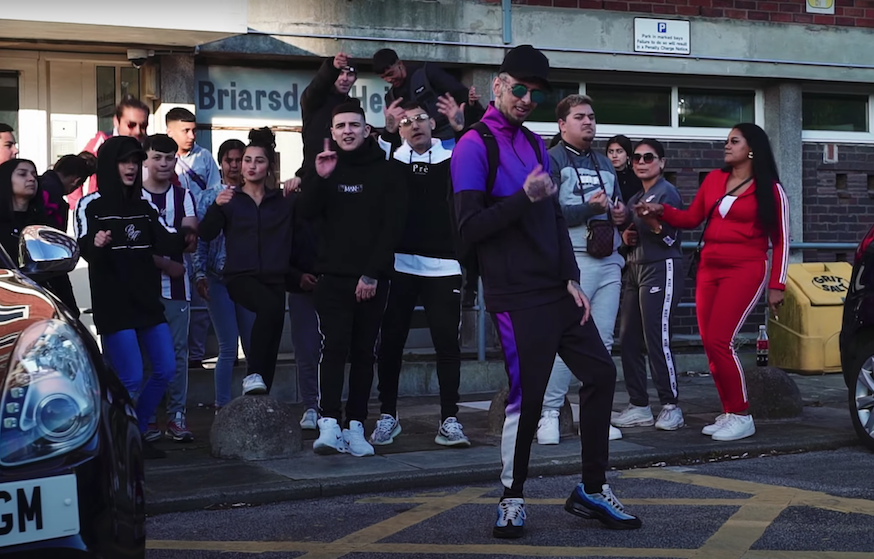 Photography © Still from ‘Tony Montana‘ by Nerokid via YouTube

As West Yorkshire emerges as a hotspot for Czech rap, artists such as Dollar Prync and Dynamic are using drill and grime influences to express the collective experience of a marginalised diaspora.

West Yorkshire is emerging as a surprising hotspot for the Czech rap scene, with artists such as Dollar Prync and Dynamic using drill and grime influences to express the collective experience of a marginalised diaspora.

Standing in front of the Briasdale Heights tower block in east Leeds in a video for his track ‘Tony Montana’, Nerokid raps surrounded by his entourage, before cutting to shots featuring fellow artists, Enzoo and Warrior. This might look like a typical British drill or grime music video, but a crucial difference is that Nerokid is rapping in Czech – both for his fans back home and for the diaspora residing in the UK.

Nerokid is not the only Czech Romani rapper who has found a new home in the United Kingdom. Part of the ‘Gipsy Gang’ group, Nerokid is often joined by his fellow rappers Enzoo and Warrior, who also make their own melodic trap.

Together with Gipsy Gang, this diasporic micro scene has established a name for itself in its former country through the likes of Bobby Blaze, Dollar Prync and Dynamic, who have all amassed hundreds of thousands of views on their respective YouTube channels. Dollar in particular, has received acclaim for his gritty sound, featuring on tracks with some of the biggest names in Czech rap.

Britain is currently home to thousands of Czech and Slovak Romani immigrants who have left their home countries in search of better lives. “With the accession of the Czech Republic and Slovakia to the European Union [in 2004], the number of Romanis who have immigrated to Britain significantly increased,” says Dr. Marketa Dolezalova, who serves as a Postdoctoral Fellow at the School of Sociology and Social Policy at the University of Leeds.

According to Dolezalova, moving to Britain enabled many Romani to leave behind some of the stigmatisation they felt in their home countries. This applies to some of the rappers as well, whose families moved to the UK during their early childhood. Nevertheless, the Czech and Slovak Romani community have equally experienced difficulties in the UK. “The Romani ethnicity is partially stigmatised here. Additionally, their Eastern European identity has become partly problematic,” says Dolezalova.

“There is racism against those with darker skin in the Czech Republic,” says rapper Ekoo, who has lived in the UK since his early childhood and is now based in Leeds. “When I went back to the Czech Republic for gigs or for other business, I felt people stare at me when I went to the shop as if I’d want to steal something.”

Ekoo says he has not experienced the same levels of racism in Leeds, crediting the area’s greater ethnic diversity by comparison to his Czech hometown, Ostrava. With regards to Brexit, Ekoo’s views are clear: “We are the ones who go to work here, who start businesses, who build things and who do something for the community.”

While some of the rappers, such as Dynamic, are based elsewhere, Leeds has become particularly noteworthy for its Czech rap scene. Rappers such as Dollar Prync, Ekoo and Nerokid have all worked with the Leeds-based Luna Studio, and the local producer, Llay.

Some of the rappers in the Czech scene have spent the majority of their lives in the UK. Now based in Liverpool, Dynamic had moved from the Czech Republic to Manchester as a four-year-old child. Dynamic, who has been singing since he was 12, made his own grime tracks in his teens before turning towards a more melodic sound, while fluidly switching between Czech and English.

Since then, Dynamic has become a well-known name within the diaspora and back home. “My music has received big reception in the Czech Republic and Slovakia, bigger than here,” Dynamic tells Huck. Prior to the pandemic, Dynamic had experienced a particularly successful few years, flying between the UK and the Czech Republic for his performances. “In 2019, things have really picked up for me and I had 220 gigs. I was in the Czech Republic every month,” he adds.

Despite feeling more confident in speaking English, Dynamic is primarily interested in singing for his Czech fans. “I’ve lived here since my childhood, it’s been about 18 years, but I don’t really feel a need to be a part of the British scene.”

This is perhaps partly because Dynamic still fantasises about returning to the Czech Republic at some point in his life. “I have this dream: I want a house in the Czech Republic with a nice garden,” he says. Before working on his solo tracks, Dynamic was part of the ‘CzechSquad’, making tracks together with Dollar Prync, who he’s known since he was young.

Dollar Prync, who has lived in the UK for over eight years, having previously resided in Ireland and Canada, is now finishing his third album Jeb System 3, which translates to ‘Fuck the System 3’. It was only with his solo records that Dollar Prync started to make a name for himself inside the wider circles of Czech rappers, music fans and critics.

His music, which is filled with bravado and confidence, is not solely rooted in drill or grime, showcasing a wider variety of influences – be it 808 heavy trap or more old school flows. Thanks to his growing audience back home, Dollar Prync has worked with influential rappers such as Hugo Toxx or Smack One, who have both featured him on their tracks over the past few years. He believes that the Leeds rap scene should get more recognition, describing it as “underrated”.

While “authenticity” is perhaps an overused term in rap, Dollar Prync brings a welcome new perspective to the Czech rap scene. Milos Hroch, a Czech music journalist and writer, says: “In some ways, Dollar Prync fills the archetype of the rapper, who rises through the ranks from the ghetto and faces systemic racism but he is on the way up nevertheless,” Hroch continues. “But he adds a certain class consciousness to Czech rap, which it has previously lacked. All of this context makes him more authentic.”

What Hroch finds particularly interesting about Dollar Prync’s work is the way he combines the imagery of his life in the UK together with that of Prague and his Romani identity – particularly in his more recent music videos. “First, you see British streets. Then it cuts to him sitting in Prague’s metro, all while he’s rapping in Romani slang,” he says, describing Dollar Prync’s latest videos to the track ‘Nabíhám’. “It’s sort of a double consciousness.”

With his upcoming record, Dollar Prync has big plans for the near future. ”I’m going to release an album, a mixtape, I’ll make music videos… I’m planning on helping others with releasing their music,” he says. “We’ll be everywhere, in Leeds, in Bradford, Birmingham, Manchester, London. We’ll be where we can be. The whole of Czech Republic and Slovakia. Let’s hope we go as far as possible.”

Linkedin
RELATED ARTICLES
OTHER ARTICLES
Rhiannon Adam spent three months capturing an ageing society wracked by division, isolation, and the aftermath of scandal.
With skyrocketing rents, packed out viewings, bidding wars and more, renting in London has never been harder.
Rogue landlords are exploiting young and inexperienced renters and leaving them in mental and financial turmoil, reports Niall Hignett.
In his 2008 series, the photographer pictured himself as Angela Davis, Martin Luther King Jr., Malcolm X, and other prominent figures.
Sean Maung’s photos are a love letter to the Black and brown communities that make up New York.
A group of young Palestinians have found temporary freedom in the act of parkour, reimagining wreckage and ruins as a series of high-octane playgrounds.