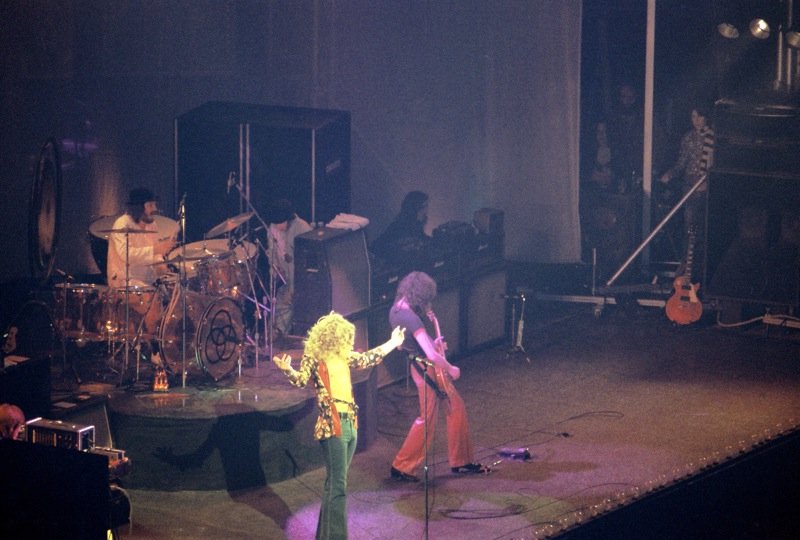 A song-by-song illustration of how to win or lose a copyright case.

From the six-second rule to the 'common source' defence, musicians have found all sorts of ways to fight off accusations of thievery. Ahead of Led Zeppelin's trial for copyright impingement next month, this is a song-by-song illustration of the loopholes that can make or break artists.

When it comes to borrowing from other artists, Led Zeppelin have form: pin-pointing moments of ‘inspiration’ has been a hobby of music geeks since the band’s inception in 1968

Next month, 45 years after the band recorded ‘Stairway to Heaven’, a jury in Los Angeles will decide whether the song constitutes copyright infringement.

The alleged source material is ‘Taurus’ – a 1967 instrumental by the band Spirit, who toured with Led Zep before ‘Stairway to Heaven’ was written.

Following similar cases in the past, Zeppelin agreed to alter songwriting credits on reissues – though mostly these seemed relatively clear-cut.

Just the titles alone were a giveaway: Jake Holmes’ ‘Dazed and Confused’, Anne Bredons’ ‘Babe, I’m Gonna Leave YouBring It On Home’ or Sonny Boy Williamson’s ‘Bring It On Home’.

Most of the time, however, the line between inspiration and appropriation can be to hard to prove – especially when you’re a relatively unknown artist taking on a powerhouse of the music industry.

Musicians often don’t have the resources to pursue a claim and those who do manage to mount a challenge often end up settling out of court.

But in the world of copyright law, all sorts of loopholes can make or break a case in the US, as the following factors illustrate…

The burden of proof
Proving that you’ve been copied requires showing that the accused had ‘access’ to your material.

In the case of Spirit, for instance, it will be argued that Led Zeppelin heard ‘Taurus’ while the two bands toured together – a claim backed up by the fact that Jimmy Page praised Spirit in interviews at the time.

But proving access doesn’t have to be so specific. In 1976, George Harrison’s ‘My Sweet Lord’ was found to have infringed on The Chiffon’s hit ‘He’s So Fine’ – a judge deemed the song so popular that Harrison must have been exposed to it, influencing him subconsciously if nothing else.

Performing for the jury
A jury also has to determine that there is ‘substantial similarity’ – a fairly vague concept – to warrant an inference of copying. This is where the experts come in. Musicologists are routinely called to testify both for the prosecution and defence but, in some cases, the musicians themselves may try to sway the jury with an exclusive performance.

John Fogerty of Creedence Clearwater Revival, for example, was once accused of plagiarising himself. The band’s label, Fantasy Records, alleged that a 1984 solo track of Fogerty’s – ‘The Old Man Down the Road’ – was a copy of the CCR song ‘Run Through the Jungle’.

At trial, Fogerty appeared in the witness stand with a guitar and convinced the jury that the songs simply had the same style – ‘swamp rock’. Once the court dismissed the case, Fogerty pursued a countersuit seeking reimbursement for over $1m in legal fees.

The ‘common source’ argument
Robin Thicke tried a similar approach last year when defending himself during a trial over his hit ‘Blurred Lines’, which the family of Marvin Gaye claimed he stole from the soul icon’s ‘Got to Give It Up’.

Though prevented from playing the composition itself, Thicke took a keyboard into the witness stand and played the likes of Michael Jackson’s ‘Man in the Mirror’ and The Beatles’ ‘Let It Be’ to show that several popular songs have the same elements in common.

This is known as the common source or ‘scènes à faire’ argument, where it’s claimed that both parties have copied from the same established formulas. In this case, the bass lines, falsetto vocal, percussion and even the party sounds in the background had been replicated.

None of those elements existed in the sheet music, however, which is what had been copyrighted. Even still, the jury ruled in favour of Marvin Gaye’s estate to the tune of $7.4m.

The ‘fair use’ defence
Proof of copying by itself is not enough – you also have to show that the copying qualifies as misappropriation.

When rap group 2 Live Crew parodied Roy Orbison’s ‘Oh, Pretty Woman’, their manager sought a license to use the track from publishers Acuff-Rose Music. Although the request was refused, 2 Live Crew released the song anyway.

Nearly a quarter of a million sales later, in 1994, Acuff-Rose Music filed a copyright infringement suit, leading to a prolonged legal battle that ended with the Supreme Court ruling in favour of 2 Live Crew.

The decision established that commercial parodies could qualify for a ‘fair use’ exception status – which typically protects critics and teachers – even when they borrow elements of the original.

The six-second rule
In 2000, the Beastie Boys were sued by avant-garde jazz flautist James Newton for using a six-second, three-note sample of his song ‘Choir’ in ‘Pass the Mic’.

In copyright law, using a minimum of six seconds of audio requires a license from the record company – and the hip-hop group had done that. But Newton argued that they had failed to get a license for the composition itself.

Despite the sample being one of many within the track, Newton reportedly declined a settlement offer, seeking 50 per cent ownership and control of the song instead.

The Beastie Boys, however, won on a technicality known as the ‘de minimis rule’, whereby a mere three notes of a composition do not need to be licensed from the composer or publisher. [Note: this rule doesn’t exist in UK copyright law. Instead usage is judged on quality, not quantity, on a case-by-case basis.]

Osama Fahmy, the nephew of Egyptian composer Baligh Hamdi, whose 1957 song ‘Khosara Khosara’ is partially used in the track, argued that the artist did not have permission to sample the song’s flute notes – and that their pairing with offensive lyrics violated the composer’s moral rights under Egyptian law.

A US district judge disagreed, ruling that Egyptian law did not apply, bringing a lengthy litigation to a close.

The passage of time
Randy California, the Spirit guitarist who wrote ‘Taurus’, died in 1997 while rescuing his son from a rip current in Hawaii.

In an interview with Listener magazine published that same year, California called ‘Stairway to Heaven’ a rip-off and expressed disappointment that Led Zeppelin had never so much as said thank you. “Maybe someday their conscience will make them do something about it,” he added.

It’s reported that the guitarist believed that the statute of limitations had passed and that he didn’t have the funds to take action anyway.

In reality, the statute of limitations means a claimant can only win damages covering royalties from the song over the past three years.

That could still amount to a substantial sum, but the lawyer representing Randy California’s estate – which funds a music school for children in his name – claims that it’s more about the acknowledgment.

“This case, from our perspective, has always been about giving credit where credit was due,” lawyer Francis Malofiy told Reuters. “And now we get to right that wrong.”

Linkedin
RELATED ARTICLES
OTHER ARTICLES
Susan Pektaş’s new photo series delves into multiple cultural layers of the region with a touch of personal mysticism.
Photojournalist Fiora Garenzi spoke with people still living in Eastern Ukraine, an area which seen some of the heaviest fighting since the war began.
A woman from Texas explains how she was forced to consider the criminal liability she might face for medication abortion over her health.
One year on from the fall of Afghanistan to the Taliban, Tiara Ataii speaks to those who have been forced to make the treacherous journey to Europe for safety, and the barriers and horrors they have faced.
Steel City is often overlooked when it comes to the country's cultural radar despite its role in shaping electronic music.
With the virus now a global health emergency, we must take steps to fight misinformation and demand a swift UK-wide vaccine roll out, writes Phil Samba.