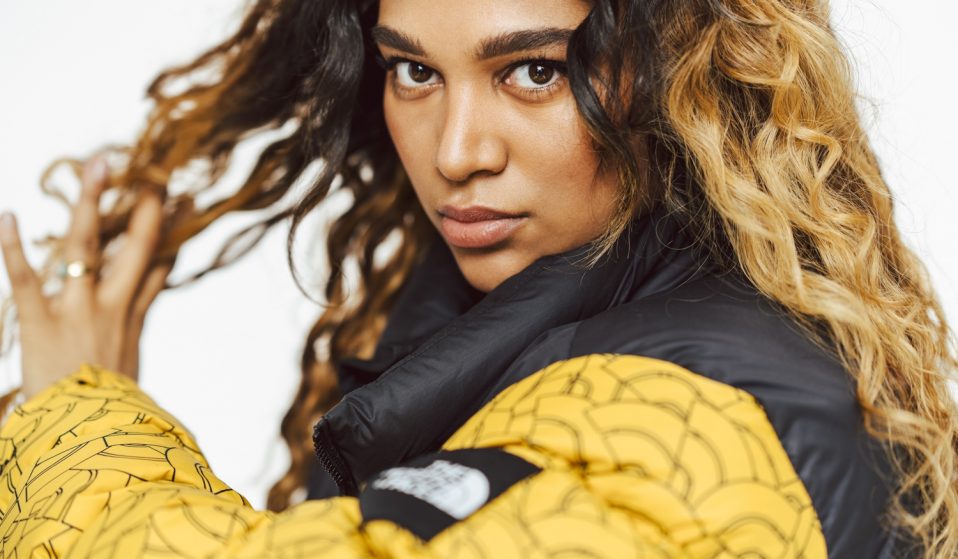 Enter the fantastical world of Sônge: an insomniac synesthete who writes songs about devils, death and deities.

Enter the fantastical world of Sônge: an insomniac synesthete who writes songs about devils, death and deities.

R’n’B singer Sônge has burst out of Brittany like a bag of psychedelic sweets. Océane Belle (her real name) is an artist who dreams up all of her music at night, and then releases it by day when she’s trying to get some shuteye. Not only is she an excellent new singer and producer, she’s an insomniac who also sees chords in defined colours when she writes and records them as a synesthete.

France may not be especially well-known for its R’n’B superstars, and yet two of the country’s most interesting singers to emerge in recent years have identified with the genre (she follows Bonnie Banane, the lauded experimental chanteuse, who’s been likened to Brigitte Fontaine).

Quimper-born Sônge has just released her first album, Flavourite CÂLÂ; a debut that more than lives up to the playfulness and titular promise of polychromatic delights. Brought up in Cornouaille (pronounced like, and culturally akin to, Cornwall in south-west England), Sônge says her childhood was idyllic and full of pony riding, with none of the pitchfork-wielding angry Le Pen voters one lazily associates with the French countryside.

She moved to Paris just six months ago and has been thriving from the energy of the capital city, channelling her love of James Blake, Bjork, reggae and Paul Gauguin into her bedroom-produced, DIY R’n’B. Clearly, her talents haven’t gone unnoticed, with Flavourite CÂLÂ seeing the light of day via Parlophone France. Unusually for a major, it’s a record of many idiosyncrasies: there’s more than a suspicion of science-fiction geekery behind some of its content, and there’s even a Christmas song, “Carol to the Bells”.

With guests including KillASon, Pauli LoveJoy and Ash Kidd, and songs about devils (“Soulourian”), twilight deities (“Crepuscule des Dieux”) and planets in the afterlife (“Thanatonautes”) sung in both English and French, Sônge’s debut ascends to an elevated place above most first album offerings. Perhaps finest of all is “Magic Hairdo”, a song about the mysteries of Afro hair, which overlaps slightly in its content with Charlotte Adigéry’s “High Lights” – indeed, you wait your whole life for a song about the shibboleths of African beauty, and then two come along in as many months.

Océane Belle is a good popstar name. Why did you call yourself Sônge instead?
Sônge is a reference to the fantastical world, to mythology, to the invisible world… Sônge actually means ‘daydreaming’ and, as I also live at night, I found it funny for someone who can’t sleep to be called that. I usually can’t get to sleep until gone 4am, but in the night I can make music and think. I like living in the night time, where it’s quiet and you can create songs and imagine chords and conjure up your own universe with your headphones on.

Now I’ve asked you about your name, I suppose this is the one time I can also ask… what’s your flavourite colour?
I was particularly taken with a certain shade of turquoise on the waves that I saw when I visited Cuba. I like a lot of colours, and I put my favourites on the album. There are a lot of magic coloured serpents on it, and holographic colours too.

Has synesthesia affected your way of composing? Are there colours that you don’t like? Major chords, minors, diminished 6ths; do these have different hues?
I got past my problem with red more than a year ago, so now there are no colours that I don’t like. I love the mauves, which appear in songs with diminished chords, or with bass from beyond the grave. I have a lot of iridescent and holographic pieces too. Those blues that I saw in Cuba I use a lot too.

There seems to be a lot of synaesthesia in music: Charli XCX, Lorde, Dev Hynes, Kanye West, Stevie Wonder(!). Is there a reason for this? I read a statistic that 4 per cent of people apparently identify as synesthetes.
Yes, there are loads! It has to do with sensitivity, so statistically, that’s quite normal. There are many synesthetes who are autistic too. There must be a secret channel not yet discovered by science between the eye and the ear!

When we interviewed Charlotte Adigéry she made the point that wearing an Afro in the ’70s was a political statement. With songs like “Magic Hairdo”, is celebrating African hair now no longer political?
It’s true that historically Afro hair became very politicised. To leave your hair natural, to smooth it out, means different things to different people. But not for me – not at all! I like natural hair, it’s good to accept yourself as you are, but I don’t feel like a victim of colonialism when I smooth my hair. “Magic Hairdo” is a hymn to the variety of hairstyles worn by Afro women, so it includes natural hair like braids as well as wigs. And it puts all this hair culture into perspective with the mysteries of the universe.

How did you get into making music?
My first instrument was the djembe, a kind of tomtom, when we learned about West African rhythm at school. It was my first foray into music, and at the same time, I was beginning to sing a little and make music with friends. Then I moved to Germany to study, and so I didn’t have any friends – or at least my French musician friends weren’t there – but I still wanted to make music anyway. And that was when I began to create music on my own with electronics. So it came from not knowing any German musicians, and maybe being a little bit shy too. I discovered electronic music and I kept making it. Then I moved to Amsterdam where I lived for one year where I continued to create songs. I was imagining and creating, and I haven’t stopped since.

As someone who’s lived in many different countries, how do you evaluate the way France manages multiculturalism? Is it more difficult for the French to subsume other cultures because the French way of life is so fixed?
It’s hard to say because it depends on a lot of variables.

Like what?
I lived in Germany, Belgium, the Netherlands; I’ve travelled to Asia, Africa, America, Oceania, and no, it’s not worse than elsewhere in France. Living together is a challenge for everyone, but there are beautiful things to discover, beautiful cultural collaborations and beyond, and this is where one must pay attention I think.

You’re very cordial and jolly in person, but there are quite a lot of darker songs on the album. Do you hide your dark side in your lyrics?
When one talks with people it’s with a sense of openness, discovery, energy, excitement! And maybe when you’re alone, you’re in meditation mode. It’s when I’m alone that I create my songs, so it’s not impossible that the introspective side comes through more in the music.

So you wouldn’t say you were a loner then?
In music I am. In my social life, I’m not a loner.

Are you one of those people who comes out of their shell on stage?
Yes, it’s very strange. The stage is a transformative thing. I don’t know why, but it’s different.

Do you feel more at home on stage than off it?
Yes, because I have the mic, so I can express myself. I’m in control. You can be a very shy person in normal life, but when you have the microphone – and it’s only you who has the microphone – it changes the dynamic a lot. I don’t know if it’s strange to say that…

Speaking of strange, there’s a Christmas song on your album. Christmas songs aren’t usually released at the end of March, are they?
Yes. It’s so that I receive more presents.

Linkedin
RELATED ARTICLES
OTHER ARTICLES
Over the years, a swimming hole in a city park has evolved into a magnetic meeting place for Philadelphians – a hideaway where people can connect with the natural landscape, and each other.
On the fifth anniversary of the tower fire, around 18,000 joined the walk to remember the 72 dead and to demand justice.
The singer-songwriter discusses her intimate new project – and the advice she’s picked up across a career as one of rock’s leading voices.
In her new book, the author explores the country’s housing crisis in human terms and calls for radical action to address a broken system.
The curators of a new exhibition are hoping to shed light on Plymouth’s vibrant but often overlooked nightlife.
Photographer Arthur Grace recalls travelling through the Soviet Bloc and finding ways to evade the surveillance of his work.