Art & Culture / Music / Hinds: ‘We didn’t even know what sexism was’ 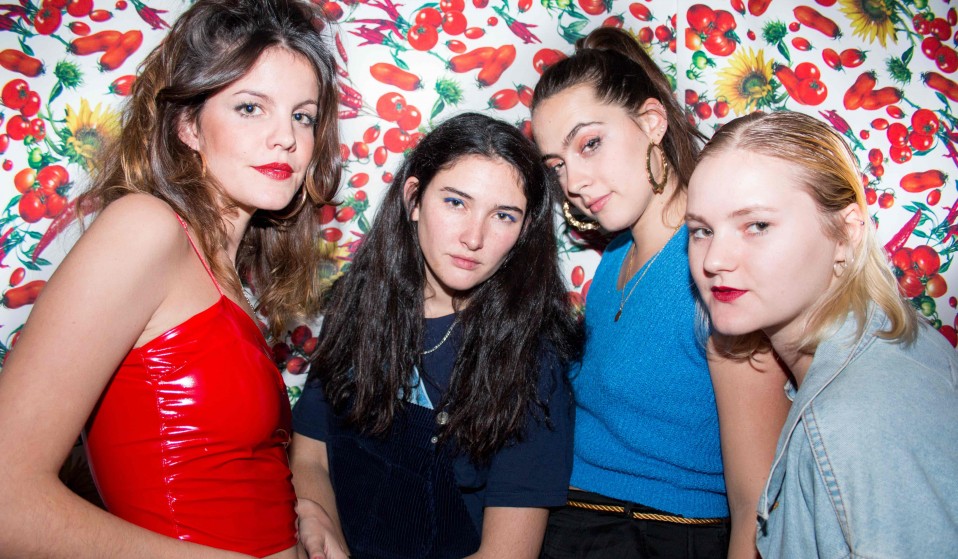 The lo-fi punk four-piece are back with their long-awaited second album, I Don’t Run. We meet them to talk love, politics, and the lessons they’ve learned so far.

The lo-fi punk four-piece are back with their long-awaited second album, I Don’t Run. We meet them to talk love, politics, and the lessons they’ve learned so far.

Hinds’ Carlotta Cosials and Ade Martin are sitting in the centre of an empty backstage room below Sala Apolo, one of Barcelona’s most important music venues. In a few hours, they – along with bandmates Ana Perrote and Amber Grimbergen  – will be headlining their first show of a sold-out run through Spain.

Having just finished a two-year tour tied to their debut album, Leave Me Alone, the group are coming down from a sensational high that took them from bedroom dreamers to hometown heroes almost overnight. But after spending only a few weeks back in their hometown of Madrid, they’re now ready to release their follow-up album, I Don’t Run.

“Our problem is we always want what we don’t have,” says Martin. “We’re on tour missing home, then we’re at home missing touring.”

As the pair begin to talk about touring, the discussion turns to America – specifically their love for the country, and how it taught them to open their eyes to women’s rights. “Four years ago sexism was a thing in Spain but nobody talked about it,” Martin explains. “We didn’t even know what it was. Then, suddenly, any time we went to the states it was a big thing, something people talked about. Having that and then coming back to Spain made us think, ‘Oh my god, Spain wake up!’”

“Human beings are stupid,” adds Cosials, with a smile.

The band’s attitude towards feminism was a huge focus point from the media during their rise to fame, and many chose to use the all-women factor as a reason to attack the group. This shook the band. Initially, they were keen to distance themselves from any female-focused labelling – but then they started to witness first-hand the undeniable sexism in the music industry.

“The thing is, I never actually felt like ‘Oh my god, I’m a girl and I have to do these things,’” says Martin. “Then, suddenly, you realise there are so many things in your day to day life that people assume just because of your sex. It has opened our minds, realising how much work we have to do – everyone in the world – with sexism.”

Since returning to Madrid, Hinds have noticed a shift, mostly spearheaded by a small community of progressive youth pushing for a more equal arts scene in the city. “I felt a really big change” Martin adds. “People are more concerned. Last year, there was a huge march for women through Madrid, just like in America. People know it exists. Now, people are waking up.”

Hinds have found themselves occupying the front lines of this new wave of change. They’re flying the flag for women-fronted music in the city, having supported The Strokes on tour and being the first band from Spain to play one of Glastonbury’s main stages. They’ve returned home with a new sense of determination – so how has this inner awakening affected the sound of the band?

“If we are talking about the things that we want, dressing the way we want, paving the way as we want and growing our hair on our legs if we want, that’s being a feminist,” Cosials muses. “Personally, I don’t feel that comfortable putting things like that in the lyrics – but we do it in a subtle way. For example, in this album, we have forced ourselves to use the words ‘he’ and ‘him’ to force boys and girls to sing along to a certain situation. I don’t think that is very usual. Using masculine pronouns is a cool step that is a little different. Seeing boys singing ‘He loved me’ is great.” 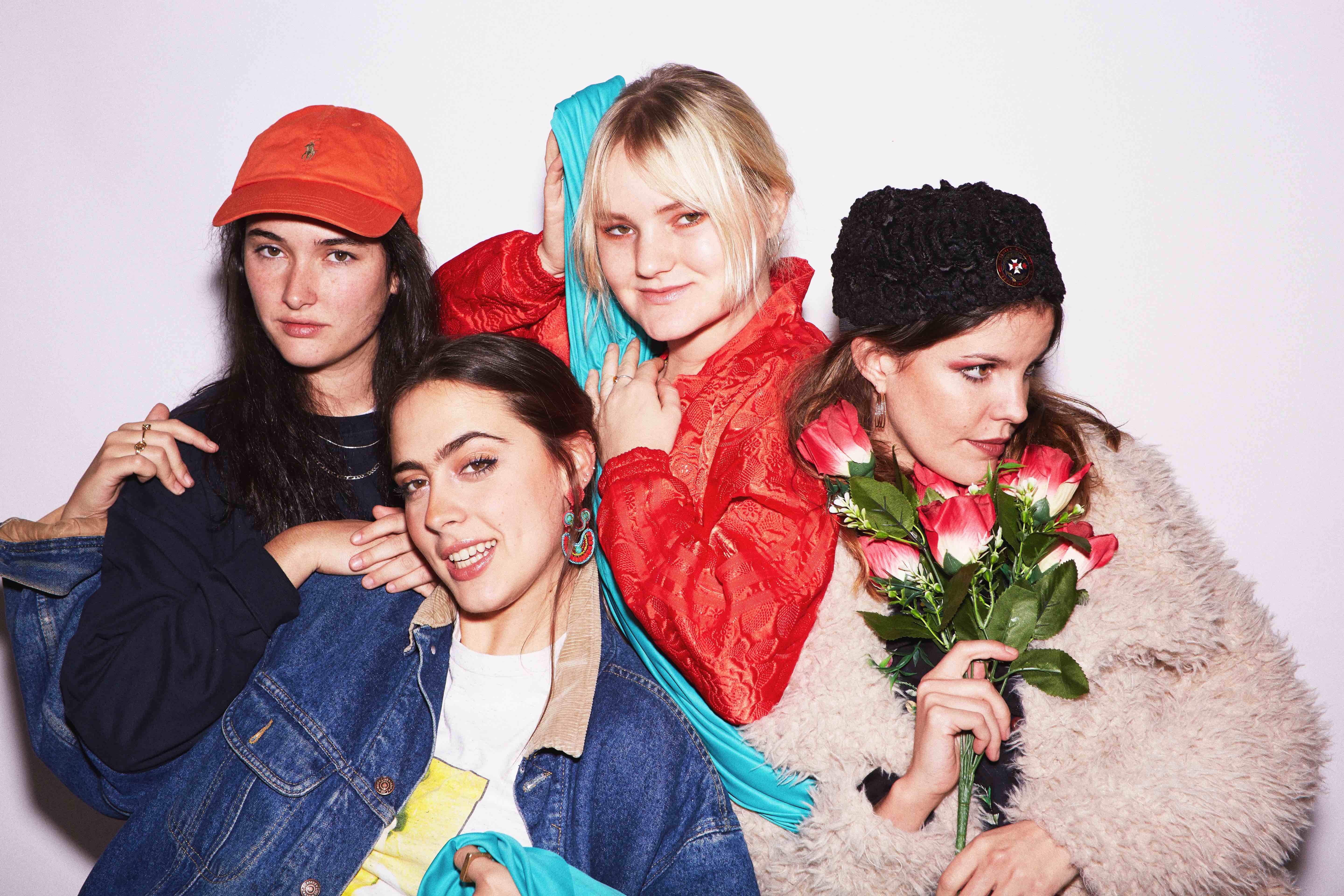 “It’s more interesting when you’re not using the music to indicate something, you’re using everything else,” adds Martin. “It’s all about being girls, but in a natural way – because we are girls. I think that’s more interesting than just trying to make a point. If not, you’re going to drown in it.”

The pair ponder over the question for a while longer. “Sometimes, we get so over-informed,” Cosials says, after a pause. “I don’t know about your Facebook timeline, but mine is always full of people complaining about everything and how horrible human beings are. I feel like art is better when it’s free of that. I like it that way. I know sometimes you feel like talking about right and wrong, but I prefer to talk about love. I think it’s the best thing we have.”

The theme of love was prevalent throughout Leave Me Alone, and its something they’re sticking with for their second release. After all, the hazy nostalgia that oozed from songs like “Bamboo” and “Garden” was what brought such an obsessed fan base to the four-piece.

“This second album is touched by what comes after love. It’s called ‘desamor’ in Spanish, but there’s no fucking translation in English,” says Cosials. “The drums are dreary but loud. The bass sounds better than ever. It’s pretty compact but it’s very different. It’s impossible not to recognise it’s us.”

Linkedin
RELATED ARTICLES
OTHER ARTICLES
Photographer David Corio’s archive offers a glimpse inside a revolutionary era of music and nightlife.
Thousands attended the annual event this year to wheelie through the city and call for ‘knives down, bikes up’.
In his 2008 series, the photographer pictured himself as Angela Davis, Martin Luther King Jr., Malcolm X, and other prominent figures.
Yesterday thousands gathered outside Buckingham Palace after news of the Queen’s death broke.
Birdy Chu reflects on documenting the historic moment in which the territory was formally passed back from the UK to China.
Following the announcement of an 80% hike in the energy price cap from 1st October, crowds gathered outside the offices of energy regulator Ofgem to protest and declare their intention to undertake a payment strike.