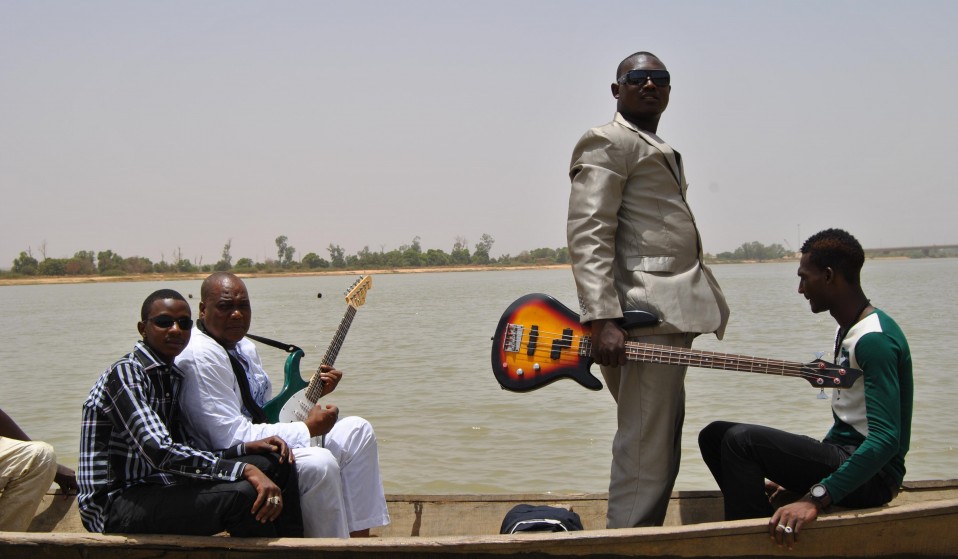 From slinging their CDs at the roadside to performing two gigs at once, Niger’s Tal National could teach other musicians a thing to two about hustling.

From slinging their CDs at the roadside to performing two gigs at once, Niger’s Tal National could teach other musicians a thing to two about hustling.

Tal National are Niger’s answer to One Direction. They’ve topped the charts again and again, are regularly featured on national TV and if you walk along a street in the capital Niamey, you’re sure to hear their tunes blasting out from TVs cranked up to full volume, like makeshift boomboxes.

But as there’s no solid system of music distribution in Niger, Tal National hustle by the roadside, getting their CDs into people’s hands one person at a time from roundabouts and street corners. They could teach rappers slinging mixtapes in the US & UK a thing or two about the grind: the thirteen member band play five five-hour shows per week, with six members on stage at any one time, often doubling up to play two gigs simultaneously.

Niger is West Africa’s largest nation and one of the world’s poorest, but it’s a cultural crossroads where Songhai, Fulani, Hausa, and Tuareg populations come together – as they do in the Tal National setup – to pump highlife, kora, afrobeat, homegrown ‘Tuareg Blues’ and Niger’s own unique brand of hip hop at full volume. Tal National draw on all these influences but produce something altogether different: a high energy mix of joyous vocals, frenetic guitar and thumping rhythms.

As their second internationally distributed album Zoy Zoy drops on FatCat Records, we spoke to leader and main guitar player Almeida to find out more about the band’s influences and inspirations.

We make music for people to dance to, and our at our shows a lot of people dance! At the night club that we perform at 5 nights a week the dance floor is on the same level as the band so the dancing becomes part of the performance. We appreciate our fans very much and they inspire us to keep doing what we do.

It is a great experience to bring our music to other parts of the world. We are very popular in Niger and we are able to play music as our profession. However there is a different satisfaction to present our culture in other countries, and that feeling inspires us and keeps us going even when we are in challenging situations.

Other bands in Niger

Music is a big part of Nigerien culture and we are inspired by everybody that is helping to keep that culture strong.

CFPM is a center for the development and promotion of music in Niamey, the capital of Niger. They give performances, lessons and workshops. There used to be an analog recording studio there, and recently a new digital studio has started there. In between we recorded our records in the studio space, bringing our own equipment. A big part of the sound of the Tal National records is this recording space, a large concrete room lined with egg cartons that used to double as a movie theatre.

Food is a big part of our lifestyle. We are Muslim so we don’t drink, but we have a very healthy appetite for the food of Niger.
Sometimes it can be hard to satisfy our appetite outside of Niger, but we have found certain similarities in other cuisines that satisfy our taste buds, like Mexican and Indian food.

I love to watch National Geographic shows on TV. Besides being in Tal National I am a judge for the local court in Niamey. That means that I don’t have much time to relax at home and watch tv. When I do have the chance, I use it to watch a National
Geographic show.

Linkedin
RELATED ARTICLES
OTHER ARTICLES
For over a decade, gamblers have won big by employing people to place live bets from the court. But does this dubious method still work?
Cindy Campbell recounts how her brother ushered in a new era of musical culture at a party she held in the Bronx in ‘70s.
Thousands attended the annual event this year to wheelie through the city and call for ‘knives down, bikes up’.
Photographer David Corio’s archive offers a glimpse inside a revolutionary era of music and nightlife.
By turning a real-life crisis into daytime television fodder, TV bosses have once again shown themselves to be completely out of touch with audiences.
Financial turmoil is pushing people who work in the sex industry into more dangerous and desperate situations as a means of survival.