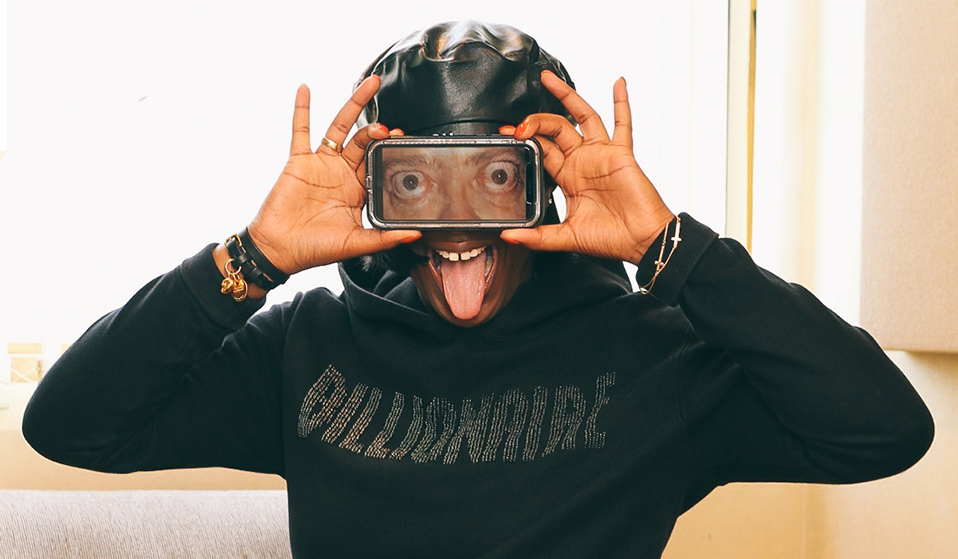 With her debut album, Tierra Whack crafted her very own audiovisual fantasyland. For the Philadelphia rapper, innovation is simply a way to stave off boredom.

With her 15-minute album of 15 indescribable songs, Tierra Whack crafted her very own audiovisual fantasyland. But for the Philadelphia rapper, innovation is simply a way to stave off boredom.

Tierra Whack has a tendency to interrupt herself with her own thoughts. “Yo, I’m so fucking mad Flying Lotus isn’t here,” she announces mid-conversation, scouring her surroundings for the experimental producer on a crisp Los Angeles evening.

Sitting in the artist compound at Tyler the Creator’s Camp Flog Gnaw Carnival, Tierra seems distracted. The 23-year-old rapper – who’s scheduled to perform at the festival the following day – has been abruptly changing subjects, only this time it’s to express disappointment that one of her favourite artists is nowhere to be seen.

“I just thought he would be here, you know?” she continues. Reminded that he could always show up tomorrow, she nods and begins to settle, replying with a vague sense of optimism: “Today is a good day, tomorrow is better.” 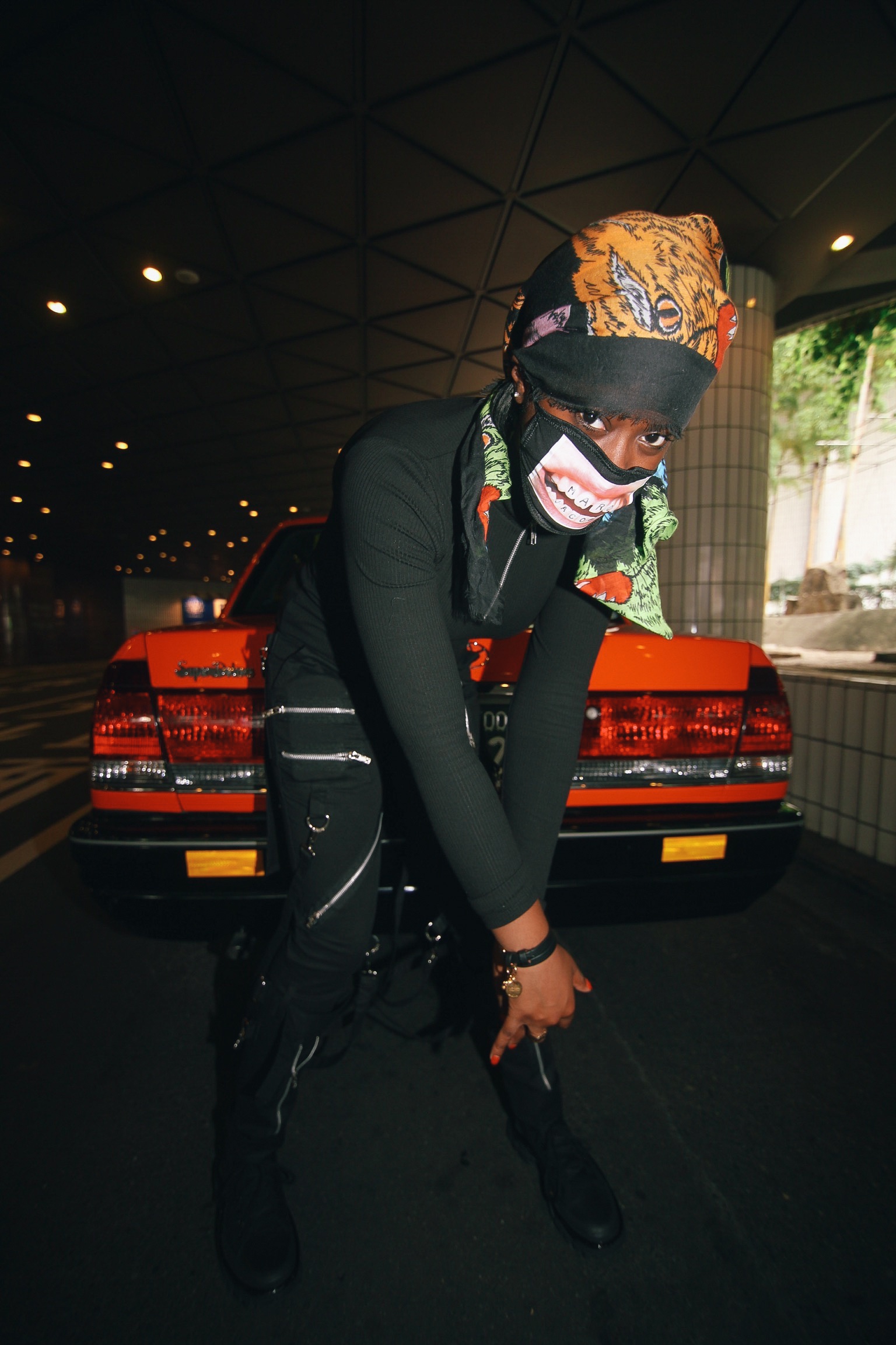 Before the Fly Lo disturbance, she was in the midst of discussing Whack World, her visionary 2018 debut. A total of just 15 minutes in length, the collection of bite-sized songs (each one exactly a minute long) abruptly concludes just as listeners begin to surrender to their slick raps and catchy hooks. Threaded together with 15 videos (inspired by Instagram’s 60-second limit on streams), the album offers a window into an idiosyncratic universe full of dark humour and cartoonish imagery.

“Is that a bathroom?” she asks next, pointing to a large trailer a few paces away. But offered a toilet break, she admits she doesn’t actually have to go. “I just wanted to know.”

Tierra explains that she has Attention Deficit Disorder, a diagnosis she received from her mother. She can pack a lot into 60 seconds of music, and speaks just as rapidly in person. Her words chase and stumble into each other, often making it a challenge to keep up with what she’s saying. But as she energetically recounts growing up in Philly to a single mom of three, it’s clear that storytelling has been a part of her identity for as long as she can remember.

Back in kindergarten Tierra was a shy kid, but writing was a helpful way of dealing with insecurities. She was obsessed with Dr. Seuss books and had a passion for poetry – so much so that when she had to string together full sentences in a composition book for homework, every single one of them rhymed.

Soon she found herself adding to her notebooks every day – be it in class or at lunch. By the time Tierra was in high school, she’d evolved from reciting poems for her mother (who always kept it real in terms of feedback) to rapping, as well as singing in the choir as a vocal major at the arts academy she attended.

When she was 15 – and going by the moniker ‘Dizzle Dizz’ – something happened that gave her a clear sense of direction in life. One day her mother drove past a group of guys freestyling in front of a camera, encouraging Tierra – after a quick loop round the block – to jump out and join in. “Show them you can rap,” said her mum. “There’s nothing to be afraid of.” Search for her name on YouTube now and you’ll eventually come across the video from that day. 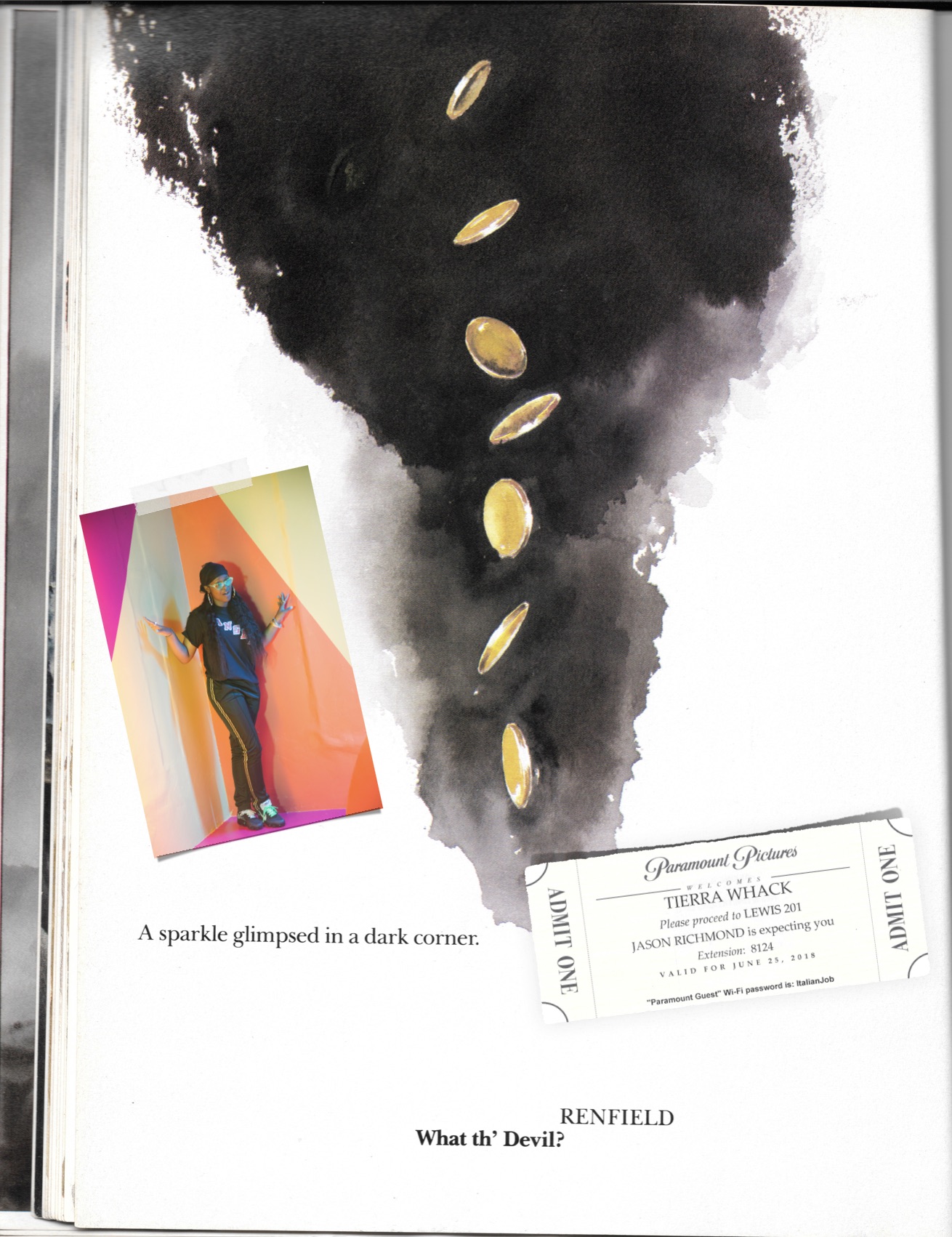 The footage captures a 15-year-old Tierra confidently freestyling on a frigid-looking Philly street corner, a cluster of grown men watching on impressed.

Tierra credits growing up in Philadelphia – an incubator for some of the best names in hip hop, from Meek Mill to Lil Uzi Vert – with her commitment to self-improvement and innovation. “I was studying everybody from my city like, ‘I gotta be on that level; I gotta hold my own in front of a room of men that can spit,” she explains. Lauryn Hill, whom Tierra recently opened for in Philly, provided a similar source of inspiration: The Miseducation of Lauryn Hill was the first album her mother ever bought for her. 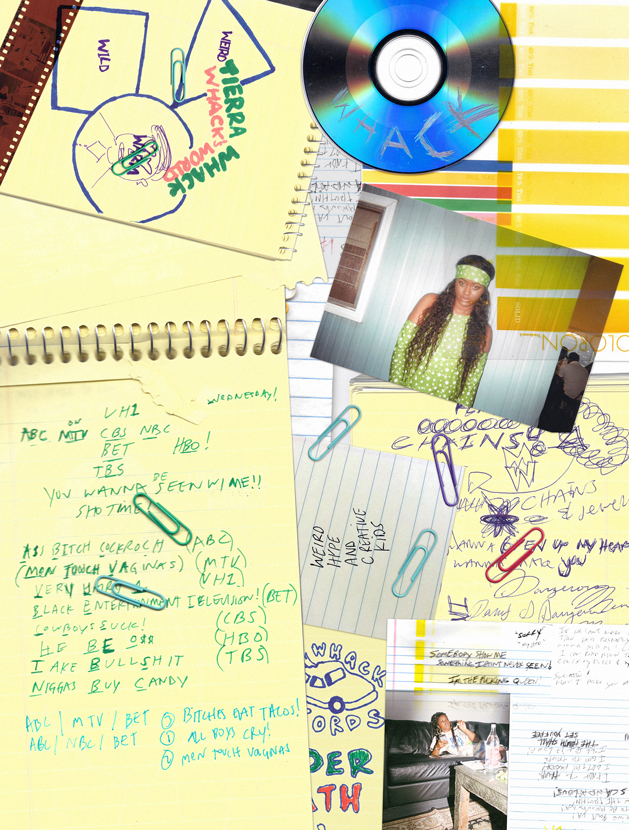 After building an impressive reputation in freestyle circles, she officially switched to performing under her real name in 2015. Two years later, breakout single ‘Mumbo Jumbo’ coincided with her signing to Interscope.

The track, a parody of the mumble rap trend, consists of her speaking gibberish over an anonymous beat: the perfect introduction to an artist with a playful determination to shake things up. There’s a child-like mischief to Tierra’s music. It’s in song titles like ‘Hungry Hippo’ and ‘Bugs Life’. It’s in her sense of style: bright colours, loud prints, unexpected pairings.

It’s in the constant references to simpler times, the evocations of nostalgia. All of this is part of what makes her so appealing to a generation of listeners who are simultaneously glued to their phones and hungry for reminders of life before the internet.

A self-described “big-ass kid” who never wanted to grow up, Tierra says her fascination with the past stems from a reluctance to face up to the responsibilities associated with adulthood. “I don’t want to pay bills,” she jokes. “I remember when I could fucking punch somebody or slap somebody and there [would] not really be a consequence.”

This twisted sense of humour is what sets her apart. On ‘Cable Guy’, she turns acronyms like MTV and BET into “men touch vaginas” and “bitches eat tacos” over a hummable melody; in the video for ‘Pet Cemetery’ she raps in a graveyard with a cast of ghoulish sock puppets. “The world is so sensitive and I laugh at the darkest shit. I watch horror movies and I laugh all the way through. That’s why I know I’m sick – deep down, something’s wrong with me.” 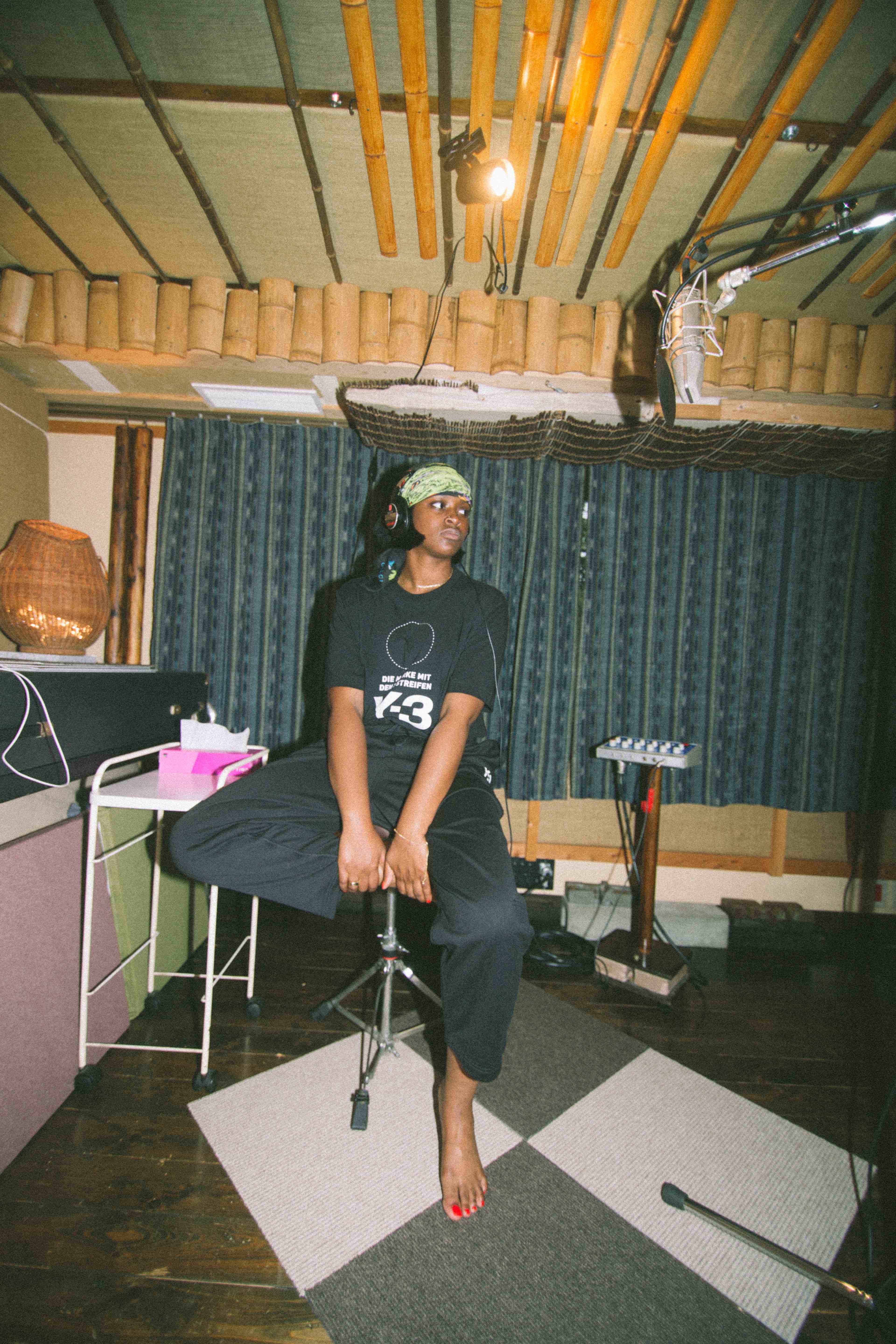 Laughing, it transpires, is a coping mechanism for her anxiety. Tierra says she often finds herself in the complicated state of feeling numerous different emotions at once, which can be overwhelming. She cites the moral support of her manager and mentor (and sometimes producer) Kenete Simms as crucial to staying positive and on track.

“More and more every day I’m just trying to figure myself out,” she says finally. There’s a pause, a turn of the head, another sign that a change in direction may be coming. “I just do things and it somehow makes sense,” she says with a shrug. “I’m just kinda winging it.”

Whack World is out on Interscope.

Linkedin
RELATED ARTICLES
OTHER ARTICLES
Ahead of the release of their first collaborative album, the producer and rapper talk psychedelics and the state of UK hip hop.
By turning a real-life crisis into daytime television fodder, TV bosses have once again shown themselves to be completely out of touch with audiences.
The two-day long event returned to London this year, showcasing a spectacular parade, steel bands and Caribbean food.
As the Scottish government announces a rent freeze, an activist with Living Rent who fought and won shares how they did it, and what must come next.
Following the announcement of an 80% hike in the energy price cap from 1st October, crowds gathered outside the offices of energy regulator Ofgem to protest and declare their intention to undertake a payment strike.
For over a decade, gamblers have won big by employing people to place live bets from the court. But does this dubious method still work?