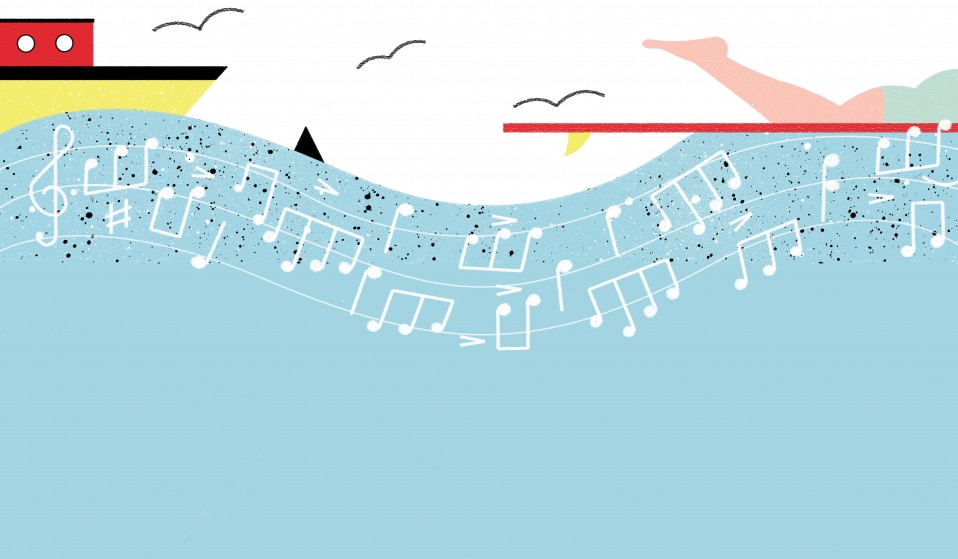 Catch a ride through the evolution of improvisational surf music, from Hawaii to the Lower East Side, with Ethnomusicology Professor (and surfer) Tim Cooley.

Catch a ride through the evolution of improvisational surf music, from Hawaii to the Lower East Side, with Ethnomusicology Professor (and surfer) Tim Cooley.

Every surfer knows you have to put yourself in harm’s way to catch a wave. The zone of bliss for the surfer is that thin line between a harmless swell and the impact zone of a crashing wave. As you paddle to catch a wave, you never know what’s going to happen. You might catch the wave, make the drop, carve a bottom turn, and set your rail for the ride of your life. Or you might wipe out, crash in a torrent of thundering whitewater, and be left wondering which way is up.

Either way, you’re going to try it again. Once you’ve ridden a wave, you don’t just want more, you need more.

Making music is not that different. You have to step over the edge. No matter how good you are, there’s always risk. Like surfing, making music can be terrifying. Surfing and music are cultural acts. Both are things we do to make sense of the world around us. I was reminded of this time and again when interviewing surfers for my book Surfing about Music. As the prototypical lifestyle sport, surfing seems to demand musical expression.

Long before The Beach Boys and Dick Dale, Hawaiians were singing and dancing hula about surfing. The early 1960s popular genre “surf music” does tell us a lot about the cultural history of surfing, but it soon became a bit of a problem for surfing musicians who suddenly were expected to play reverb-dripping guitar. Not until the more recent spate of successful surfing musicians (Jack Johnson, Donavon Frankenreiter, Ben Howard, Tomorrows Tulips, Steph Gilmore etc.) has there been a shift in popular thinking about music and surfing.

One major change since the 1960s is that surfing now has a few siblings: skateboarding and snowboarding. While they share a lot, there are differences in the music that tends to happen in these overlapping communities. Something about pushing the limits of control in skateboarding especially seems to resonate with hard-edged, sharply defined punk, post- punk, and hardcore.

Take Sonic Youth’s music, which is scattered across skate video soundtracks in the last couple of decades from Santa Cruz’s Streets on Fire in 1989 to Enjoi’s 2006 classic Bag of Suck and 2013’s A Place In The Sun by New Balance. Their grungey, punk or noise-rock sound seems to teeter on the edge but even when improvising a live gig, they are controlling the mayhem.

The careful composition in their song structures, combined with the meticulous control of the timbre of each guitar, drum, and voice, draws comparisons with the act of shredding. Sure, play that guitar with a rusty screwdriver, but land it like Ed Templeton stringing together railslides and grinds on just about every hard edge in Southern California.

It’s no surprise that the Tempster chose Sonic Youth’s ‘Titanium Exposé’ for his sequence in Toy Machine’s Welcome to Hell video. There are plenty of surfing films with hardcore soundtracks, too.

Taylor Steele’s Momentum set the standard for that. Even today’s icon of surfer-soft-rock Jack Johnson cut his teeth covering punk rock he heard in surf films. But with surfing, there is no fixed platform on which to try your moves. The fluidity is so extreme that looser, more open jamming — or improvisation — is demanded by each wave. Every wave is a new song.

Improvisation fuels many surfer musicians. Dave Rastovich’s Life Like Liquid project is a good example – bringing together a loose alliance of surfing musicians for two weeks in a beach house outfitted as a temporary recording studio to drive creativity. Everything was improvised. In the Life Like Liquid film, Australian surfer and percussionist Terepai Richmond puts it succinctly: “There is a certain level of musicianship that you need to develop before you can read signs in improvised music. But it’s the same in surfing.”

He explained that you have to be able to improvise to jam with a band, and to ride a wave without wiping out. Surfer and singer-songwriter Andrew Kidman would agree. His musical collective, The Val Dusty Experiment, created the soundtracks for several of his surfing films. Some surfers make music that sounds so much like their surfing looks that it’s uncanny.

Californian Alex Knost’s surfing references classic 1960s longboarding, but he takes it to extreme limits, teasing our expectations with a full-rail bottom turn followed by a quick walk up to the nose for a teetering ten. He is so loose we think he is going to fall, but he doesn’t. His band, Tomorrows Tulips, also references and then messes with icons of the 1960s. Their track ‘Tired’ is a warped, weird, and hilarious cover of the Sandals’ ‘Theme to the Endless Summer’ from Bruce Brown’s iconic 1964 surf film.

On the other end of the spectrum, Tom Curren’s music can be heard as an evolving soundtrack to his own growth as a surfer. One of his earlier bands, Skipping Urchins, was a semi-thrash band that captured the intensity of his most competitive years. But his first album, Ocean Surf Aces (1993) is much jazzier, mirroring the graceful lines he carves on waves. A decade later when he released his eponymous album, his sound had mellowed considerably.

I don’t know if surfers are inherently more musical than any other group of people, and this is not the point. I am convinced by my work with surfing musicians from around the world that surfers need music to help them make sense of surfing, and to create a sense of a surfing community.

Music is one of the ways we express who we are as individuals and as groups. It is no wonder that cultural practices as radical as surfing and skating require edgy, risk-taking, yet fluid music to help express what it feels like to make that drop on our board of choice. Words don’t quite do it justice

Tim Cooley is Associate Professor of Ethnomusicology and Global and International Studies at UC Santa Barbara. He is author of Making Music in the Polish Tatras (Indiana, 2005) and his latest book Surfing about Music is available from University of California Press.

This story first appeared in Huck 42 – The Improv Issue. Subscribe today to make sure you never miss another issue.

Linkedin
RELATED ARTICLES
OTHER ARTICLES
In the latest instalment of Photographers in Conversation, the chronicler of raves, protests and beyond explains why he’s drawn to such specifically visceral environments.
The author discusses the all-consuming nature of heartbreak, and turning the experience into an incisive exploration of love and loss.
The singer-songwriter discusses her intimate new project – and the advice she’s picked up across a career as one of rock’s leading voices.
Photographer David Hoffman recalls documenting the extreme wealth inequality around Tower Hamlets and Hackney int the 1980s.
Finland-born photographer Sirkka-Liisa Konttinen looks back on her decades-long documentation of life in Northern England.
Photographer Arthur Grace recalls travelling through the Soviet Bloc and finding ways to evade the surveillance of his work.