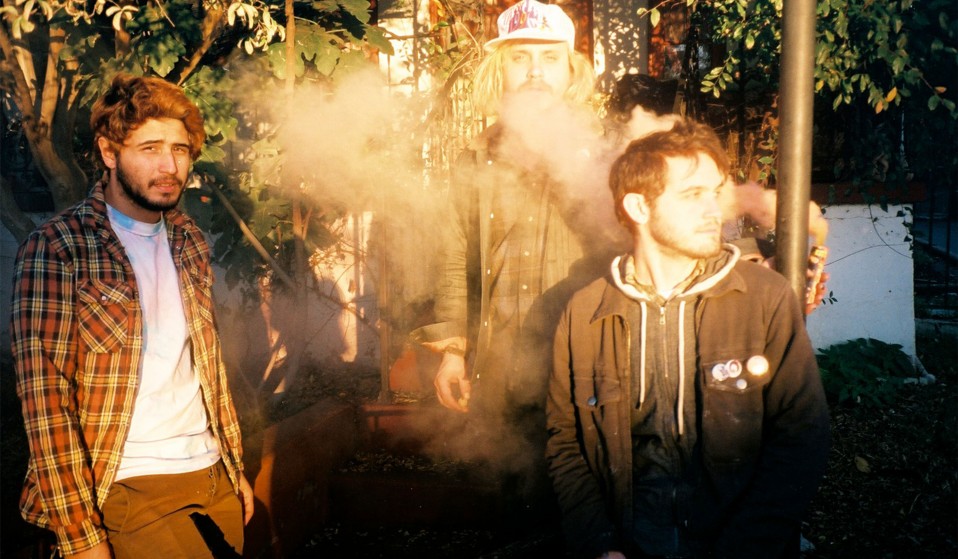 “We’re here for the snakebites and the chilly, cloudy weather,” says Danny, bassist in Together Pangea. “We try to get out of the LA heat.”

When we meet on a typically miserable London afternoon, Pangea are getting stuck into their first European tour. It marks a big milestone for the Southern California trio, who struck out from their “dismal” LA suburb of Santa Clarita (notable only for the Six Flags’ Magic Mountain ride and white dudes with huge fake testicles hanging from their pickup trucks) with a series of DIY gigs up and down the West Coast.

“I think starting off DIY and connecting with whoever’s listening to you is really important,” William, on guitar and vocals, says. “You can’t just be playing up there by yourself, like you’re rehearsing. So you have to be able to find a way to connect to the people who are listening to you.”

“We try to break the barrier between the audience and the band as much as we can,” drummer Erick adds. “Jumping out into the audience, or inviting people on stage…”

“…Or talking shit to people in between songs for no reason and seeing how people react,” William buts in, laughing.

Together Pangea have put in the work paid their dues. They spent years driving up and down the West Coast, playing for donations at house parties, art galleries and even a sewer tunnel.

“We almost played a strip club one time,” remembers William. “This topless bar called Cheetah’s reached out to us.”

Reaching out to bands in other cities to do co-op shows, relying on word of mouth and support from local radio stations allowed them to slowly build their base out from LA. Many of the bands they played alongside in the early years didn’t survive, but getting a spot on the Burger Records Caravan tour allowed Pangea to step up to the next level and play in front of Burger’s loyal crowd in cities across the States.

“They’ve created a cool model for bands to interact and work with each other and have a collective vibe,” says Danny. “It’s cool when you realise all your favourite bands are your friends.”

Burger was a springboard to their first major label release on Harvest, the Sick Shit EP, which kickstarted a year of near-continuous touring, which in turn brings them to London. As they sit together in a shabby Shoreditch pub, nursing their snakebites while the roadies load in upstairs, Pangea are in a reflective mood.

Their new album Badillac is about to drop and the band are discussing their next steps. New opportunities are opening up – some good, some… less so: like having their record featured in an episode of crime drama NCIS: Los Angeles, fronted by LL Cool J.

“We just knew we were going to have a little girl playing drums to our music,” Danny muses. “It ended up being the thing that saved her life [laughs]. If the girl hadn’t left our CD and one Dorito she would have been… merked. We didn’t really know what they were going to do and you barely hear the song. It’s our album cover and LL Cool J saying ‘Together Pangea’.”

“I thought that was fucking rad,” William says, laughing.

So, are pyrotechnics the way for Together Pangea to take things forward?

“If we got blown up by a drone missile that would be fucking cool,” Danny says. “I’d like to see myself die really well in CGI. If you’ve seen Through The Never by Metallica, that’s where we’re heading.”

Badillac by Together Pangea is out now on Harvest Records.

Linkedin
RELATED ARTICLES
OTHER ARTICLES
As the Criminal Bar Association enters its fifth week of action, criminal barrister Russel Fraser explains why the legal professionals have walked out and how action is likely to escalate.
With the virus now a global health emergency, we must take steps to fight misinformation and demand a swift UK-wide vaccine roll out, writes Phil Samba.
To mark the premiere of his new documentary on surfing giant Gerry Lopez, the filmmaker and former pro skateboarder sits down to share his unique brand of wisdom.
A sharp increase in officers armed with the electrical weapon is resulting in serious injuries and deaths.
Ahead of the release of his new album, the producer reflects on his battle with drug use, getting into painting and what Madonna taught him.
After rewriting the indie rulebook with her devastating songs about romantic longing, the singer-songwriter is now imagining a future in which the artist is no longer a product.