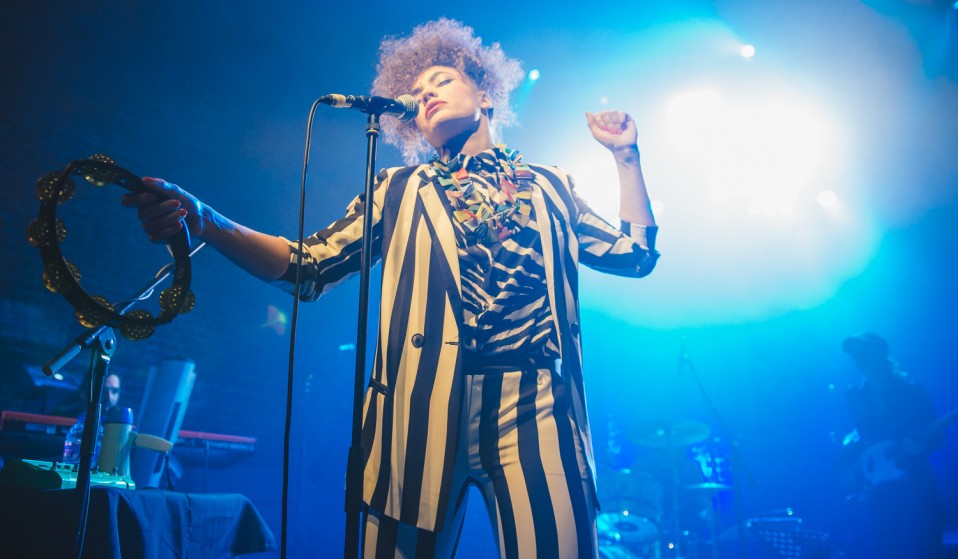 Andreya Triana is looking up to the sky, raising a tambourine triumphantly above her head as her voice reverberates through London’s cavernous Village Underground. Dressed in a striking black and white pinstripe suit, her tiny frame dominates the huge venue. To her right are an array of pedals, effects mics and a megaphone sounds which she will use to twist her voice into experimental new shapes as she unleashes her sophomore album Giants live for the first time – and the audience is in awe.

Long before her early collaboration with Flying Lotus on ‘Tea Leaf Dancers’; her one-woman improvised Freeflo Sessions with live samplers, loops, percussion and beats; and her sultry and tempestuous vocals that brought Bonobo’s Black Sands to life, Andreya’s audio experimentation laboratory was her pink bedroom in Brixton.

Growing up in South London, Andreya would scan local pirate radio and walk through Brixton market soaking up the reggae, R&B, and banghra blasting out from the stalls. At 9 or 10, she would take this array of sounds and put it through her double cassette deck, adding vocals and recording backwards and forwards to create multiple harmonies. “It was really exciting you know,” she remembers. “I honestly think there’s a certain beauty when you don’t have much and you’re trying to make the most of what you’ve got. That’s what I’ve always done.”

Aged 14, her family moved to Worcester, which seemed like a death sentence at the time. As a half-Jamaican, quarter-Scottish, quarter-Trinidadian child (with a Colombian surname), she was the only non-white kid in her new school and longed to return to the multicultural melting pot of Brixton. “I missed that feeling of being tapped into everything,” she explains. “In London there was inspiration everywhere.”

Her time stuck in the Midlands would end up paying off down the line. She became even more deeply focussed on music and continued to improvise and experiment with vocals and instruments – using the echoes of her London past to guide her. She took advantage of her school’s sprawling music cupboard to teach herself to play the violin, flute and saxophone. “Being self-taught allowed me to follow my own voice,” she explains. “I didn’t feel I should follow a certain path or technically, it should sound like this. It was just what feels best.”

Eventually she broke out of Worcester, first to uni in Leeds, then was talent-spotted by Red Bull Music Academy and flown out to Melbourne for an intensive emerging artist conference. There she collaborated with Flying Lotus (before he’d released anything), which lead to working with producer Simon Green, aka Bonobo, who produced her first album her debut, 2010’s Lost Where I Belong and stealing the show on his huge Black Sands, released the same year.

Andreya and Bonobo just clicked and pushed each other to take their sonic experiments further and further. “He tries really crazy stuff,” she explains. “Loads of the sounds on our favourite track on that album ‘Draw the Stars’ are sounds we found in his kitchen. We were just clicking pens and banging spoons together and it was so fun. It just goes to show you can make music in the most obscure ways and it’s really exciting.” Together they went from producing tracks in his attic to the epic Bonobo live tour, which saw them touring the world continuously for two years with a full orchestra – culminating in a 10k sell-out crowd at London’s Alexandra Palace.

Flash forward to 2015 and Andreya’s roots are firmly planted in London once again. After two years baring her soul in the studio, improvising, experimenting and pushing herself through self-doubt and life’s ups and downs, she’s ready with her glorious second album Gold. It’s not out till May 4, but tracks have already been picked up for stellar remixes by Max Graef, Nikitch and Logistics, and she’s had the time to lay down two awesome tracks on Lapalux’s forthcoming Lustmore LP.

Stepping out onto the stage at Village Underground, she admits she’s nervous about how the new material will go down live. She’s got nothing to worry about. As the crowd join her in a riotous singalong to the first single ‘Gold’, she pauses. “Am I singing the chorus to my own song right? I should be, there’s a lot of people out there. But to be honest I’m making it up as I go a long a lot of the time.”

Andreya Triana’s Gold is released May 4 on Counter Records. Stream the album now at The New York Times.