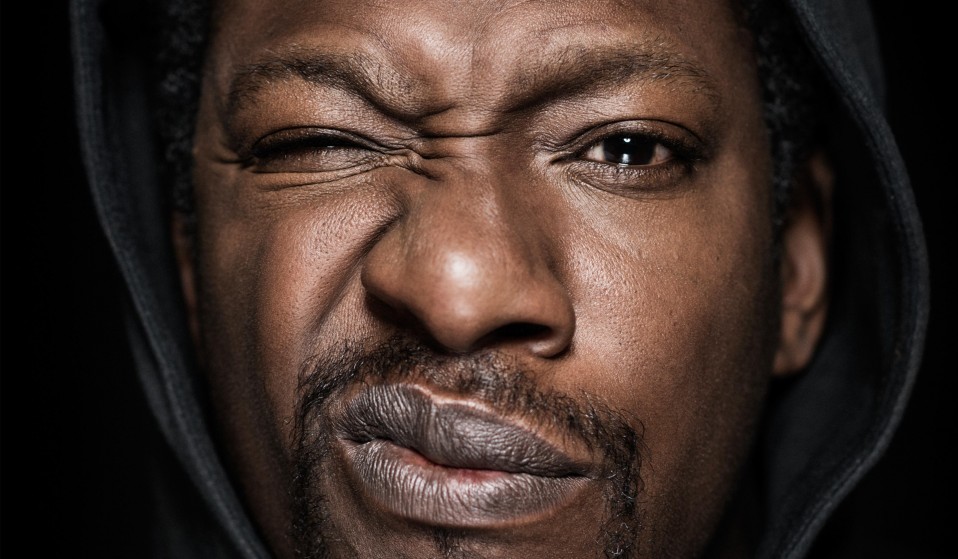 Roots Manuva on his constant battle to move forward, from recording gibberish to playing beats to his three-year-old son to working with the most cutting edge producers around.

Roots Manuva on his constant battle to move forward, from recording gibberish to playing beats to his three-year-old son to working with the most cutting edge producers around.

Roots Manuva might just be UK hip hop’s brightest son. Since his first release in 1995, the Brixton rapper has helped take the genre beyond a cockney-infused US import, innovating and collaborating with artists as diverse as The Cinematic Orchestra, Beth Orton and the Gorillaz, to show homegrown talent can push at the boundaries and carve their own path.

These days, the label hip hop seems barely able to contain the progressive and experimental sounds of Rodney Smith. There’s a new album in the works and if his latest Facety 2:11 EP, which features visionary producers Four Tet and Machinedrum, is anything to go by, the full length will represent another giant leap into the unknown.

How have you approached this new record differently to the ones that came before?
It’s a familiar process, yet at the same time each record is like you’re starting again because things keep changing, people are always moving forward. Even though it may the same method: finish the record, master the record, tell the press, blah, blah, blah… But each record has got to renew that eternal Peter Pan, to open your mind, to be thinking about it with the same innocence that kind of brought us here in the first place.

What keeps you interested in the process?
It’s within the internal self edit. Sticking with an idea, taking a song right through. Working it way through the grinding machine and seeing what happens. Trying to force it through all kind of different shapes and see if it still survives. It’s almost like breaking the song to make the song.

Back in the days, I was more like, ‘Fuck it, this is it. The first take is the best take, never change it. These are the pillars!’ But now there’s more of a want to experiment. I’ve always experimented, but there’s more of a distinctive evolution of the batch of ideas. That subtext and that dialogue, tap-tapping into the performance of the word: wanting to become more than the word. Wanting to be cloaked at the same time as have multiple entendres. Being engaging, at the same time as wanting to present a distinct, unusual argument and a debate.

What were the first ideas you sat down with?
The first thing was rap, rap, rap. Just rap to everything and anything. Rap to a recording of Nice & Smooth, rap to a ringtone, record a whole song just through an old dictaphone, recording stuff through headphones, actually recording total gibberish. Endless takes of freestyle. Going up on the net and trying to find interesting old instrumentals and trying to really kind of tap in to what it is I like about a break or what it is I like about a drum sound.

What follows this experimentation period?
Pick some secondary, untrained ears. My children are really good to just run things by them. They don’t discriminate, they tell dad as it is. If they don’t like something they don’t like it. But where they are interested in something always amazes me. Their ages range from twelve to three. When my youngest was really young, I used to play CDs and demos and he already had things he would want to hear. It was always quite surprising what he would want to hear. This is probably when he was just two years old. It’s interesting for a two year old, for them to be specific to a sound, when they haven’t really started discriminating yet. They haven’t started gravitating towards genres or even know about genre. Or they haven’t gotten to the stage of my older children, where they’re giving me advice.

Do your kids help you move with the times?
Freshness is more to do with an internal process of not being able to stop it coming out. Wanting to stay curious about what’s going on in the world. And being honest to the fact that things have changed. Things have changed massively and it’s definitely really hard to keep up.

Who are you most excited about working with on the new record?
It’s a proper hodge-podge. The original target was to take me out of something that I could do in my mum’s bedroom and take the songs as far as I possibly could. Working with Four Tet, what I sent him and what he sent me back was a far different vision – we both had clashing visions, you know? I was reading his basic template as, he was going to take it to another place. Then he literally chopping out a whole refrain, a whole hook line that I thought was one of the best things I’ve written in years. He was like, ‘Clip, no thanks! We’ve heard that already from you, you need to be here. This is where I hear it. It’s done.’ It was just refreshing, engaging with someone else, for them to be sure and swift. I could have argued with him for yonks, like, ‘No, no, no! Put my refrain back!’ But he was certain.

Are you happy giving away that creative control?
Over the years, because I’ve collaborated with so many people, I’m used to them chopping up bits and pieces. It’s only with age that I can do that. I can imagine a time before where I would have been so unable to do that, so self-conscious and like ‘Look, that’s what I’ve done so you better work with it.’ But now there is a kind of internal barometer. I want to constantly be doing something new so I’m interested in working with anybody who has new ideas and perspectives on capturing the rawness, the performance and the motif of what I do. Me rapping on a track is so central to the general perception of the Roots Manuva thing, but Roots Manuva is not just about rapping. It’s beats and beat discovery. It’s not just about beatmaking, because I put bands together and it’s never just about one thing. It’s not just a standard approach to studio craft, it’s about a community of thought behind trying to travel from the A to B of groove fermentation. It’s so much more than what actually meets the air.

Facety 2:11 EP, featuring Four Tet and Machinedrum, is out now on Big Dada. Stay locked for the LP, coming soon.

Linkedin
RELATED ARTICLES
OTHER ARTICLES
A campaign led by ex-torture survivors and refugee organisations has left the Tories with no planes left to carry out their callous scheme.
The Egyptian government are continuing the repressive mistreatment of environmental campaigners.
The campaigning charity are on a mission to increase inclusion, participation and representation of Black people in trail running.
A new exhibition brings together 150 works by twelve photographers, offering mesmerising and intimate depictions of life.
The hate Just Stop Oil faced after throwing soup over a Van Gough painting has been immense. Here, they explain why it won’t deter them.
After a devastating fire, creatives in the city are coming together to call for more affordable workspaces.