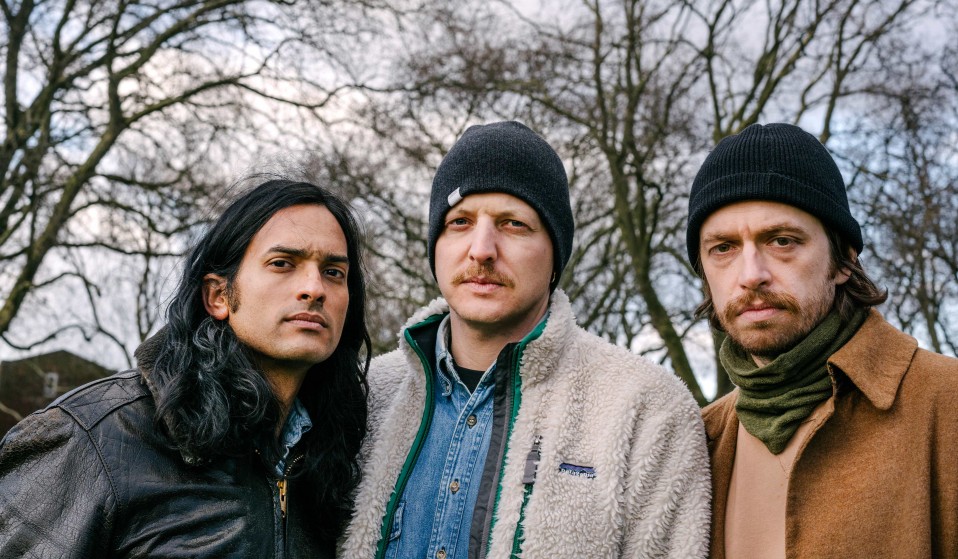 After 11 years together, surviving hardship and high expectations, pop eccentrics Yeasayer have learned how to navigate the fears and insecurities inherent in making art.

After 11 years together, surviving hardship and high expectations, pop eccentrics Yeasayer have learned how to navigate the fears and insecurities inherent in making art.

It’s a cold Monday morning in London and Yeasayer are looking a little worse for wear. They’re hunched around a table in the corner of a hotel, heads sagging, body clocks out of sync. Frontman Chris Keating’s demeanour makes it hard to tell whether he’s disillusioned or just hungover. “Yeah, you were right the first time,” he says, smiling wearily. “But that’s always been the case.”

This may not be the ideal opportunity to take stock of their career and the challenges it’s thrown up, but a certain transition needs to be addressed. Four years have passed since Yeasayer released an album, during which time they stopped touring and were dropped by their label.

The Brooklyn-based trio of songwriters, singers and multi-instrumentalists has gone from being the world’s most blogged-about band to prompting tweets asking, ‘Whatever happened to Yeasayer?’ Drifting off-radar isn’t necessarily a problem when people know what to expect from you, but it is when your only constant has been reinvention. 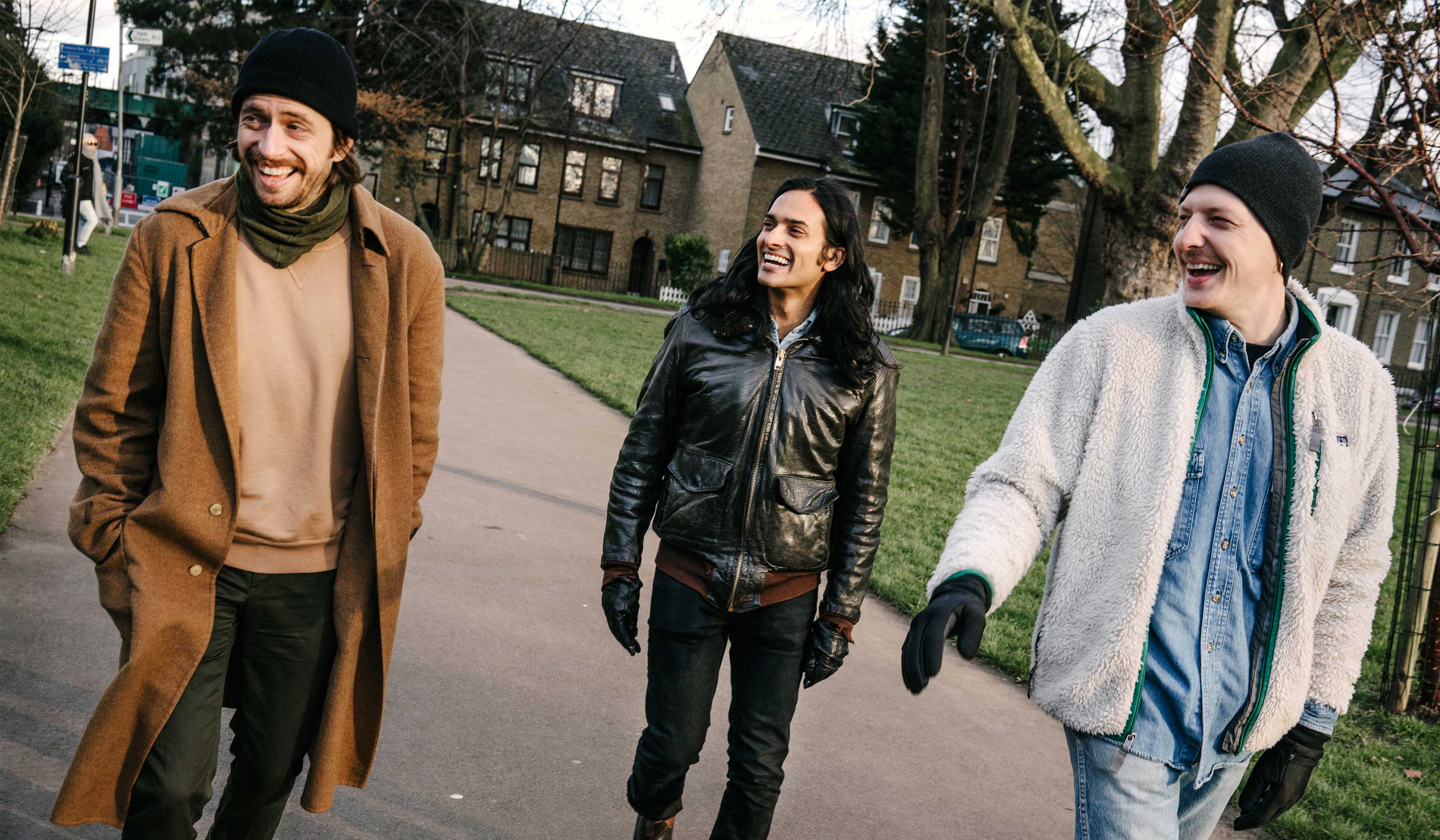 Between the futuristic folk of 2007’s All Hour Cymbals, the genre-mashing pop of 2010’s Odd Blood and the dark electronica of 2012’s Fragrant World, each Yeasayer release has progressively won new fans, lost a few older ones and stoked a hardcore following. Now, after searching for a new label, dealing with damaged recordings and reaching out to a producer for the first time, they’ve returned with the eclectic but ominously titled Amen & Goodbye.

“To be honest, I thought all of our albums could have been the last album,” says bassist Ira Wolf Tuton, laughing. So they have considered quitting? “Never!” he fires back, sarcastically. “We’re just a bunch of best friends walking down the golden road with our hands held.”

“I mean, dude…” Keating chimes in. “So. Many. Times. I’ve been in Sweden feeling like I was going to die from flu, hailing a cab in minus-twenty degrees, having an awful soundcheck. This is definitely not a bad job but there are moments where it’s just like, ‘Fuck this… What are we doing here?’”

The fear of returning to a day job driving trucks can creep in occasionally, Keating says, but crumbling in the face of hardship seems unlikely. He and guitarist Anand Wilder have been friends since the first grade (even joining a barbershop quartet together as teens) while Wolf Tuton and Wilder are distant cousins.

They rely on each other to navigate the fear and doubt that accompanies creativity, whether it’s throwing out an idea or finding a way to make it work, and insist that nobody’s more critical of the band than themselves. “I’ll hear songs from our previous albums and think, ‘Man, what was I thinking?’” says Keating. 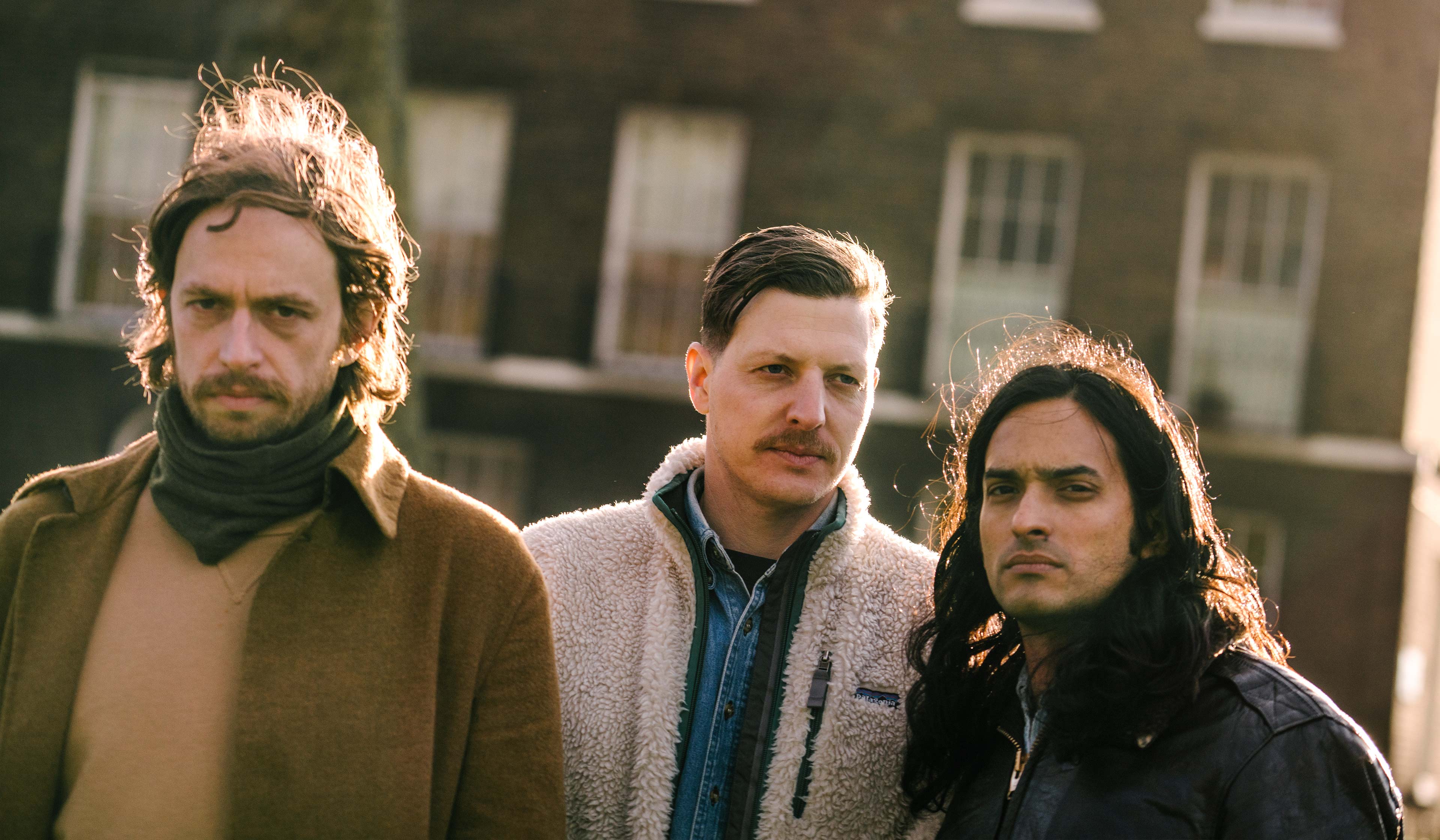 Yeasayer have always been measured in what they do, from the elaborate visuals to their studious songcraft. Wilder, for instance, began playing violin at the age of two. At four came the cello and then formal training at music school – a time when he also became adept at redefining his image.

That sort of industriousness feels seems integral to the band’s identity. Even now, in conversation, they’ll frequently interrupt themselves to discuss whatever music’s playing in the background, swapping observations about a particular artist’s career.

Yet as much as the trio’s humour shines through while reflecting on their own development – almost every answer is punctuated with a wisecrack – there’s a faint sense of frustration with untapped potential. Asked what their honest idea of success is, they hesitate for a moment.

Wolf Tuton half-jokingly suggests that success is simply “mental health – to get to a positive place where you create something and you’re not beating yourself up”.

Wilder says he’d feel more successful if only the band could get more airplay. “There’s always that scene in music movies where they’re like, ‘We made it to number one! We’re on the radio!’ And we haven’t had that yet. It’s all: ‘Oh, there’s a tweet. Someone played it in… Phoenix.’”

Keating says he doesn’t know what success looks like, admitting that the inner-critic often gets in the way. “It’s a tough spot to be in,” he says. “You have to navigate what you find satisfying. Is it the applause? Is it the completion of a project? Because if it’s getting money, we don’t really do that.

“The applause is cool but once you’ve had it a bunch… I don’t live for it. Creating stuff is what it’s always been about for me. Making things makes me feel whole. If I worked in a factory but still got to go home and make art, I don’t know… that might be just as satisfying.” 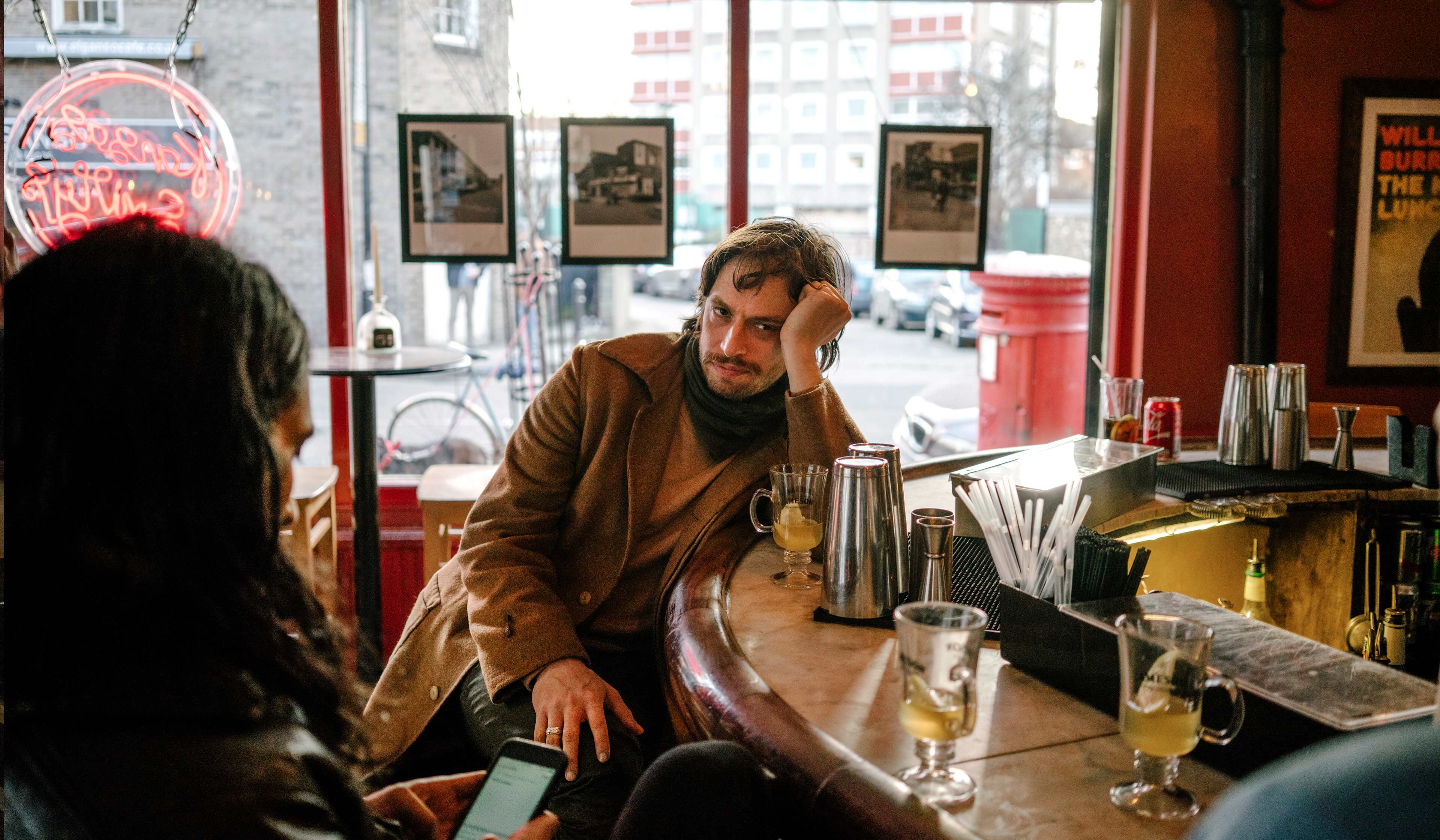 Later in the day, as we wander through London Fields and into a nearby pub for some hot toddies, the trio savour a moment of respite before leaving for the airport. That’s when they start at it again: geeking out over whoever’s on the jukebox, trading observations and recommendations. It brings to mind something Keating said earlier, something that seems to encapsulate the reason Yeasayer keep going, regardless of expectation.

“The idea is to reach people,” he said. “We’re not trying to make highbrow, purposefully obtuse art that only four people are going to appreciate. You’re trying to make something that’s pure to yourself that resonates with others emotionally, aesthetically or rhythmically. 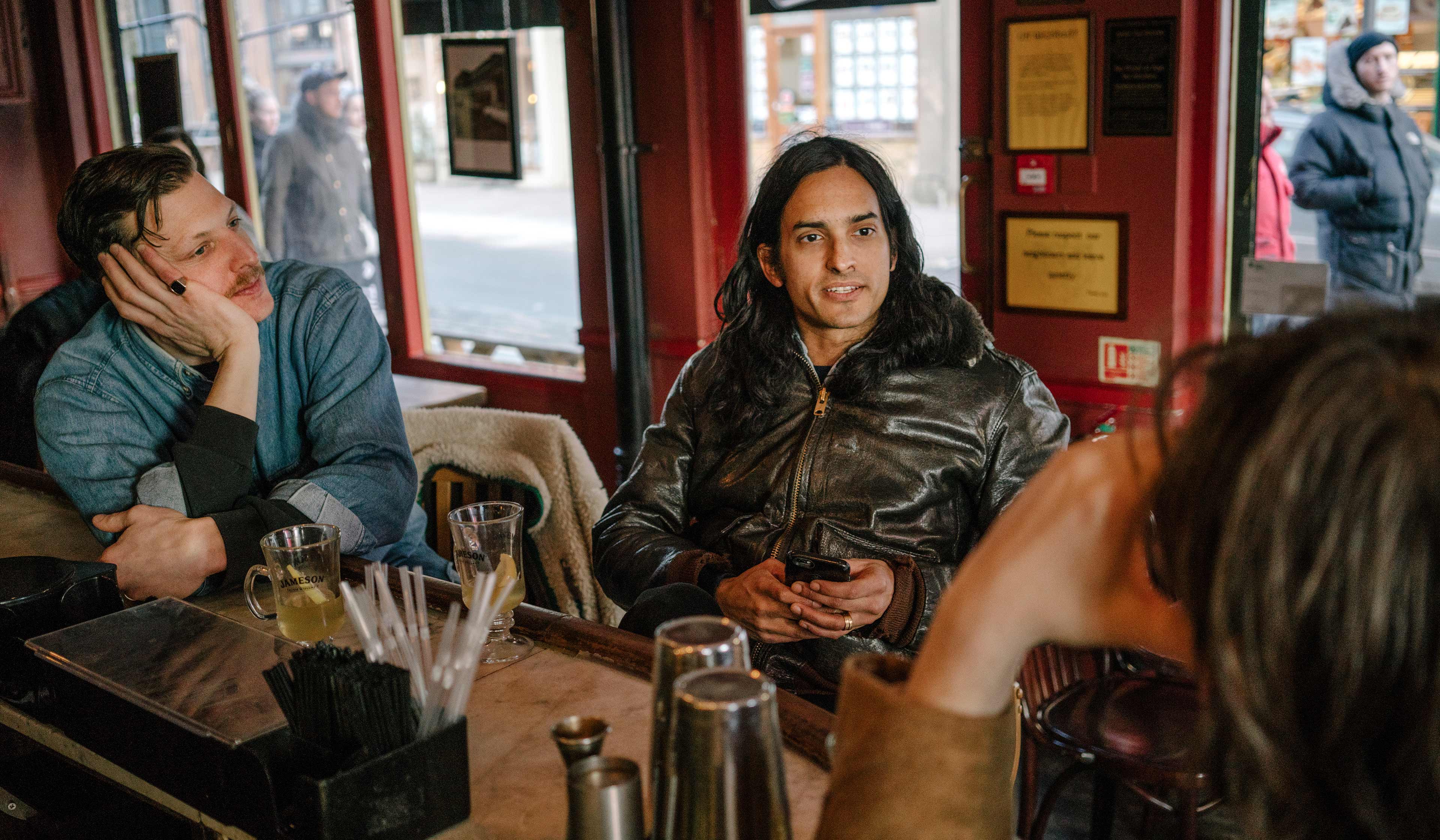 “Nothing’s ever exactly as you envision it but eventually you have to put it out there. It has to live in the world; otherwise it’s just a work-in-progress. Ultimately music is a democratic art form.

“Whenever I hear something strange on the radio, I know there’s a chance someone else out there likes it. And whenever you do have that bonding moment of, ‘Oh shit, you like that too?’, that is the best. That’s what it’s all about.”

Amen & Goodbye is out on Mute.

Linkedin
RELATED ARTICLES
OTHER ARTICLES
Taking us through one of the most dynamic years in recent history, Laylah Amatullah Barrayn new photo book contains tender yet confrontational portraits.
Yohon Tatum, aka Legendary Father of the House of Tisci, reflects on nurturing a new generation of talent.
A new film from Berghaus traces the story of Adam Raja, who left behind a turbulent upbringing to discover the healing power of climbing.
Mass crustacean die-offs in the North East have led a community of fishermen to take action to save their seas.
The pro skateboarder withdrew from the 2020 Olympic Games so he could come out as trans. Now, he’s hoping to encourage others to live as their authentic selves – within the sport and beyond.
A new law change is enabling Britain’s donor-conceived children to know the truth about their origins – but campaigners say the fertility industry must do more to protect people.