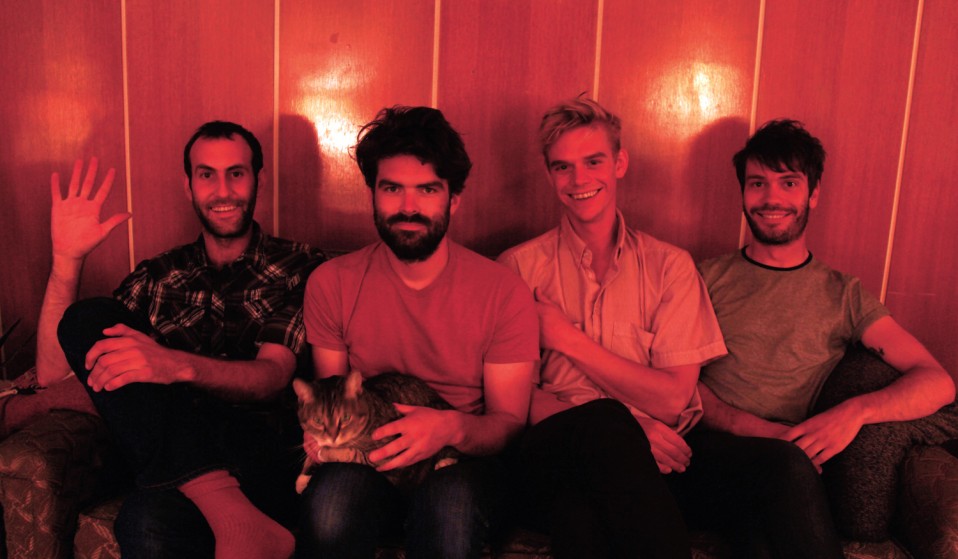 Canadian four-piece Viet Cong, featuring former Women and Chad VanGaalen musicians, reveal some of the motivations behind their controversial output.

Canadian four-piece Viet Cong, featuring former Women and Chad VanGaalen musicians, reveal some of the motivations behind their controversial output.

It’s cold in East London today. People are wrapped in scarves, hats, balaclavas and thick, woolly jackets and walking quickly as they try to get out of the cold and into offices, homes or bars.

Inside one such warm bar, Canadian post-punk band Viet Cong are waiting. The band are in town to play a show at Oslo in Dalston and they’re feeling the effects of transatlantic flight. Matt Flegel and Scott ‘Monty’ Munro sit down looking weary as they adjust to the time difference.

Formed from the ashes of Women, a fiery indie four-piece that disbanded for good in 2012 after the death of guitarist Christopher Reimer, Viet Cong are all natives of Calgary in Western Canada. Monty, who had been playing guitar in Chad VanGaalen’s live shows, and Matt started playing together post-Women and soon recruited drummer Mike Wallace and guitarist Daniel Christiansen to form Viet Cong.

Growing up in Alberta, Canada, where the average high temperature in mid-January gets to -3°C, staying inside and making music presents a more viable option than going outside to play sports. “It’s bleak enough that there’s not much to do other than sit in your basement and do whatever you do,” says Matt. “We actually played a lot on the street and did go outside when we could, but I think that was when we were young young. Then I think my old man bought us guitars and cut off our cable television. Y’know, there’s eight-month-long winters in Calgary so you have a lot of time to kind of hunker down and we would play endlessly, like all the time.”

Calgary’s brutal winters would seem to lend themselves well to the emergence of a thriving, youth-oriented music culture but that wasn’t exactly the case. “Growing up there was a bit of an all-ages scene,” says Monty, “then kind of in the late-90s it was pretty devoid for a while.” The scene has been a bit more dynamic recently with bands and musicians like Women, Chad VanGaalen and Feist making breathing new life into the local lineup. And of course, Viet Cong, are part of that resurgence.

The music isn’t what anyone would call ‘accessible’. Their self-titled debut album, released January 2015, is a swirling hive of post-punk, industrial rock and time signatures that change at will. It ain’t pop, but it ain’t half bad. Their debut self-titled album was released to critical acclaim scoring an 81 on MetaCritic and massively positive write-ups from The Quietus and Pitchfork among others but it didn’t come from any grand plan Matt explains: “We didn’t have a band name and we didn’t know if we were going to start playing shows. Then Mike came back and we asked him to play drums and we decided that we needed another guitar player. Then we just started trying to figure out all the shit that me and Monty had worked out.”

Matt and Monty worked out a lot of the band’s early music but they could never work out a band name. Someone blurted ‘Viet Cong’ out one day while they were practising and it just stuck. Matt says: “So, what I’m saying these days is that we wanted people to start talking about it because no one really knows enough about that time in history, which isn’t at all why we named ourselves that.” People have sent them hate mail in the past with scars from the Vietnam War being reopened. Obviously, this isn’t what they were going for in the slightest.

It’s not insensitivity but creativity – a desire to experiment with meanings and a set way of doing things – that makes Viet Cong sound unlike anything else out there at the moment. They’re unique and you can feel them growing into their sound with each track on the record. Hopefully, there’ll be more of that to come and less of the on-stage combustion that tore apart Women.

Linkedin
RELATED ARTICLES
OTHER ARTICLES
Pissed Jeans are a noisy punk band based in Philadelphia whose music will make you want to smash your shit up.
We caught up with Black Lips bassist Jared Swilley during on of the worst ice storms in the history of Atlanta.
Long Beach trio Tijuana Panthers float between garage, punk and surf rock.