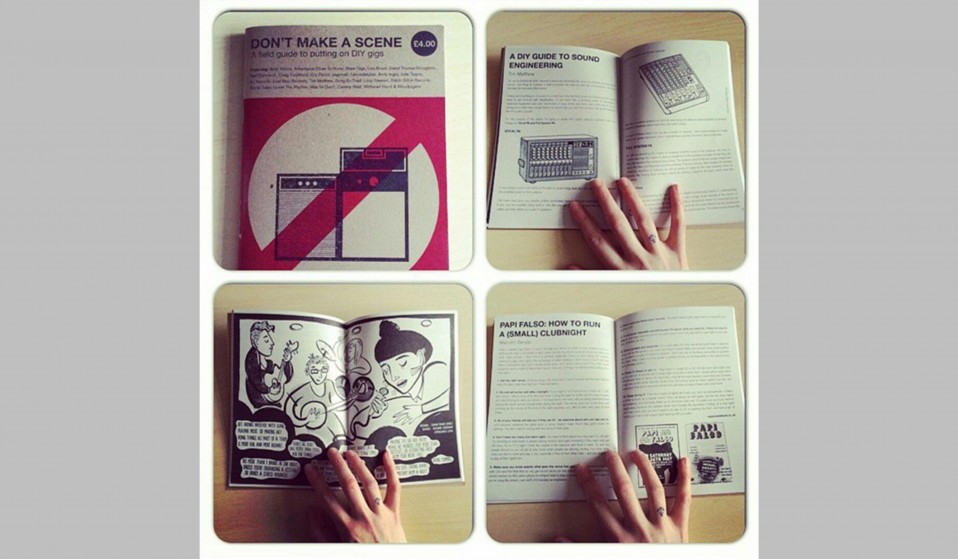 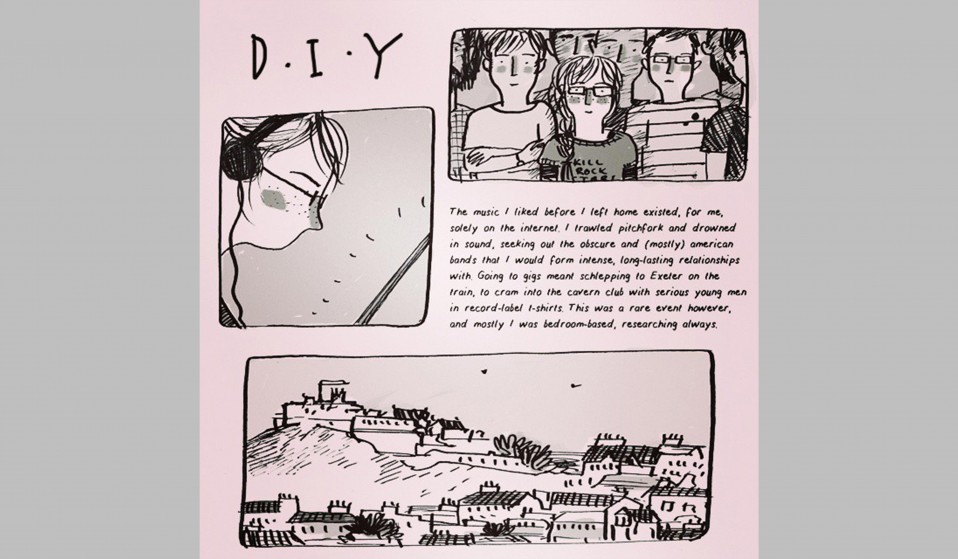 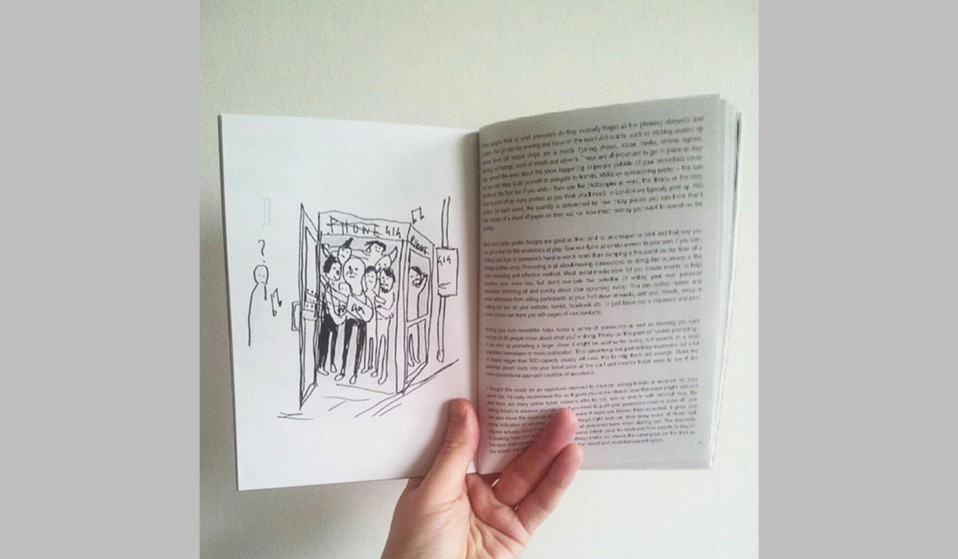 Putting on gigs, you soon learn that feeding and paying your bands are the two most important jobs on a promoter’s to-do list. If things go tits up, equipment breaks or nobody shows up, that’s less of a big deal. It’s a good time to reach out for help and grow your network.

Don’t Make a Scene zine was born from Bartholomew Owl (from Edinburgh’s eagleowl) and Rob St. John’s frustration at too many bad experiences working with shitty promoters who only cared more about the money than music over the last decade.

They knew things could be done better, so they reached out to friends and helped compile what’s become an indispensable guide to pulling off killer DIY shows.

After the storming success of issue one, a second is now in the works. We hit up Rob and Bart to find out more.

What was the motivation for making Don’t Make A Scene?
Bart: There were a variety of reasons. Rob had the idea for the zine for a long time ago. But for me the main motivation was born from frustration of a thousand support slots for big promoters that are all about making a profit and devote no time or attention to treating those involved with respect.

I’ve played so many shows which have ended a up a really discouraging experience – all stemming from very simple basic things that the promoter did badly or neglected to consider. I guess the aim is to encourage people to think about why they’re putting on shows, and to treat all involved with respect, rather than focus on the bottom line.

Rob: I wanted Don’t Make a Scene to be enabling and empowering, for it to contain as much advice and as many how-tos (and how-not-tos) as we could compile from DIY promoters and musicians who inspired us.  I think that every town, however small or remote, has the potential to host touring bands – and films, exhibitions, spoken word, whatever.

All it takes is a critical mass of people with the enthusiasm, time and a little bit of knowledge to make it happen. From there you can get the green shoots of new communities, new friendships, new bands, new artists and writers – the things that can make living somewhere enjoyable and exciting.

There’s no ‘right’ or ‘wrong’, necessarily in DIY gig promotion. Although paying and feeding your bands is pretty much essential. And the zine doesn’t contain all the answers. What it does do is lend a lot of advice, resources, experience and reassurance for new promoters who want to get started (and some daft stories and great illustrations, too).

Why did you choose to put this out as a zine, and not in another format?
Bart: At the moment it’s only available as the printed zine. We probably will make it available digitally at some point, but it was important to have something physical. Its a discussion of DIY shows, so we wanted it to be available on the merch stand.

Rob: As Bart says, it was important for us to have a physical edition that we put a lot of time and effort into making – it’s riso printed with soy inks on recycled paper and card, and is a beautiful thing – which could then be sold on merch tables at shows and exhibitions, and which could be passed on between friends and collaborators.

We intentionally kept the cost down as much as possible (£4.00) to make it as accessible and affordable to people, whilst also making a bit of profit to be able to split entirely between our contributors. Chris Tipton from Upset the Rhythm writes that “just because you’re DIY doesn’t mean you’re not professional about what you do”, which I wholeheartedly agree with.

Rob: Yep, bringing all the contributors together and (occasionally… OK, regularly) chasing many of them up to meet a deadline which stretched later and later. Incidentally, the latest submissions all came from our closest friends…

Another challenge was co-ordinating with the printer – Footprint Printers in Leeds, who are excellent – when the page count and content (and as a result, the price and release date) couldn’t be confirmed until we had collected all the submissions. In the end, despite a riso printer breaking down half way through the first run, it all worked out.

What’s your personal highlight?
Bart: I mention in my introduction about how thrilled I was that we had a quote from Ian Svenonius. That’s still mega exciting. But I think just the response in general – both from contributors and from the public – was incredible. It totally surpassed expectations.

Rob: There are three things. I think it was partly the joy of receiving new submissions and being so pleased with their eloquence, creativity and pure ‘good advice’. Highlights include Clarissa Cheong’s brilliant piece on all ages shows, Lizzy Stewart’s amazing illustrations, John and Narbi from fakeindielabel being both inspirational and hilarious, Chris Tipton and Emily Tracer Trails giving great ‘nuts and bolts’ accounts of how to plan, budget and pull off a show.

Second, there’s the response we’ve had to the zine – the first edition sold out within a week, and we’re now well into the second – people seem genuinely excited that Don’t Make a Scene exists as a resource.

Finally, it’s been a hoot to work with Bart. We’ve been making music and other various ‘stuff’ together in one permutation or another for almost a decade now, and as a few contributors write in DMaS, there’s a real joy to collaborating on projects like this.

What’s the best gig you’ve ever been to?
Bart: There are too many to pick just one. One that really informed my approach to shows was when I went to see David Thomas Broughton at Bedlam Theatre in Edinburgh. It was the first Tracer Trails show I ever saw and the first time seeing David. He’s always really good at breaking down the barrier between the audience and the performer, and making the crowd feel part of the performance. Being in a theatre, there was still a stage set behind him from a previous production and he had fun picking up props, exploring the space and coming in and out of the audience. Lost Map shows are always good at that too – there seems to be less of a divide between the performers and crowd. Everyone in it together.

Rob: Upset the Rhythm shows in London are always great. I love how they toe a line between working with bigger bands, while keeping an open, DIY atmosphere, and often using interesting and out of the way spaces. One gig that sticks with me was watching Viking Moses and Golden Ghost play in a tiny town hall in Anstruther, Fife for the Fence Records Homegame festival in 2008 or so. Brendon and Laura ended their set in the middle of the night with a cover of Leonard Cohen’s ‘Lover, Lover, Lover’ on the piano. Brendon left the hall out onto the seafront, with a hundred people or so all singing the chorus “Lover, lover, lover, come back to me”, only to burst back in through a side door, singing the words louder than ever. It’s moments like that – the special, the unusual and the unexpected – that make putting on DIY shows so rewarding.

Why does the world need DIY shows?
Bart: When done right, DIY provides a safe, welcoming space for people to perform, to exchange ideas and to share an experience. Asides from anything else, there’s a lot of bands that would never reach an audience without it. Its also places emphasis on culture and art over commerce – and allows people to take control of their culture.

Rob: Absolutely, to have spaces where you can be inspired and encouraged, without the main imperative being about money or tiptoeing your way up some imagined music industry ‘ladder’ is vital. Similarly, shows where the audience is part of it all, not just a paying consumer to be ushered out at the end by bouncers, but to be welcomed, to trade records and artwork, to all go for a drink together afterwards. Openness, inspiration and inclusion are the things, I guess.

What’s the greatest lesson you could impart for anyone who wants to start putting on DIY gigs?
Bart: Reading the zine again, I think the key thing that comes out is communication. That’s the most important aspect of promoting – being honest and open with what you can achieve, and ensuring the channel of communication between all involved remains open.

Rob: Communication and fairness, absolutely. Be enthusiastic (if you’re not, why should your audience?), plan ahead, make every aspect interesting – the posters, the venue, the stage decoration, the music between bands – and make everyone feel welcomed. And don’t worry too much if things go wrong, equipment breaks, or no-one shows up – just keep going and don’t be afraid to ask for help!

Check out Don’t Make a Scene.

Linkedin
RELATED ARTICLES
OTHER ARTICLES
Former Fugazi and Minor Threat frontman and Dischord Records owner Ian MacKaye on self-preservation, digital obsession and finding your life tree trunk.
Alex Wrekk took her passion for zines to the next level and set out to declare July International Zine Month.
As a new exhibition at the Smithsonian draws on cycling's tradition of radical social change, we gather together some of the best left-field bike happenings in the world right now.