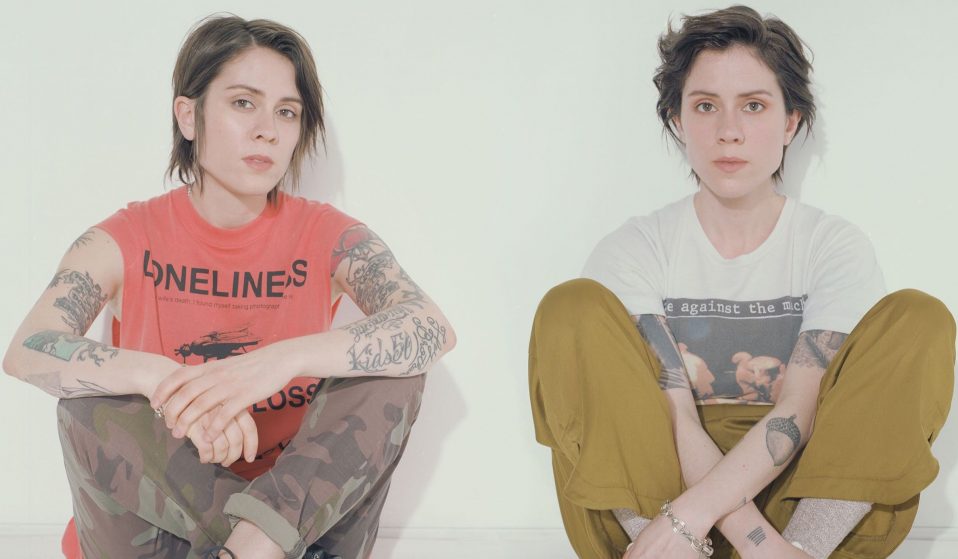 In their first memoir, the indie pop duo journey through their adolescent years – an odyssey of sex, drugs and self-discovery.

In their first memoir, the indie pop duo journey through their adolescent years – an odyssey of sex, drugs and self-discovery.

Growing up in the conservative Canadian city of Calgary, Tegan and Sara enrolled in high school in the ’90s. Not especially popular – self-described “losers”, in fact – the twins went on a high school odyssey of drugs, alcohol, secret relationships and music, coming out the other end as songwriters with a record deal.

“It was similar to the experience most people have in college,” says Sara, speaking over the phone from her apartment in Vancouver. “We came out and became rock stars and things were pretty wild. We took a lot of drugs and had sex with our friends… It was kind of a crazy story – an origin story of how we found our voices and selves.”

Those two years – a period they describe as the most challenging of their lives – are the subject of Tegan and Sara’s first memoir, High School, which is being released in conjunction with a new album, Hey I’m Just Like You. Written in alternating chapters with brazen honesty, the twins journey through their teenage years coming out as artists, and as queer women ready to take on the world.

To mark the dual release, Sara takes Huck through the process of going back to high school to write the book.

How did the idea of a book come about?
We were finishing up an album cycle – the same cycle we’ve been in for about 20 years where we write songs, record them, tour them and then start all over again. We had talked about if there were any other artistic endeavours [we were interested in exploring], and made a list of things we might want to try out – like a podcast, or another music project, or even a musical. We were just thinking about how we could continue to use our creative energy, but do something that would be a different kind of storytelling.

One of the things we had talked about over the years was collecting stories or essays into a book. We sat down with our book agent, we were talking about maybe something childhood related – we have some pretty wild stories from when we were kids. I thought, ‘What if it was more of an origin story and that process of discovering yourself artistically?’ And that happened to us when we were in high school.

How did you get your mind back to that time?
We’re still friends with the majority of the people we went to high school with, like actual friends. They’re still our most significant social circle. So we do a lot of time travelling when we’re all together, we still act like we’re in high school and talk about high school a lot. Our memories and storytelling was quite easy to access because those things are still at a top level.

It’s like those people who get married to their high school sweetheart – you  wouldn’t be amazed that they could still remember meeting each other. For us, we figured out that we were songwriters, we got into a band with each other and we got offered a record deal, all in high school. And we’re still in that band 20 years later! Of course we remember it. Those are experiences burned into my cellular memory. 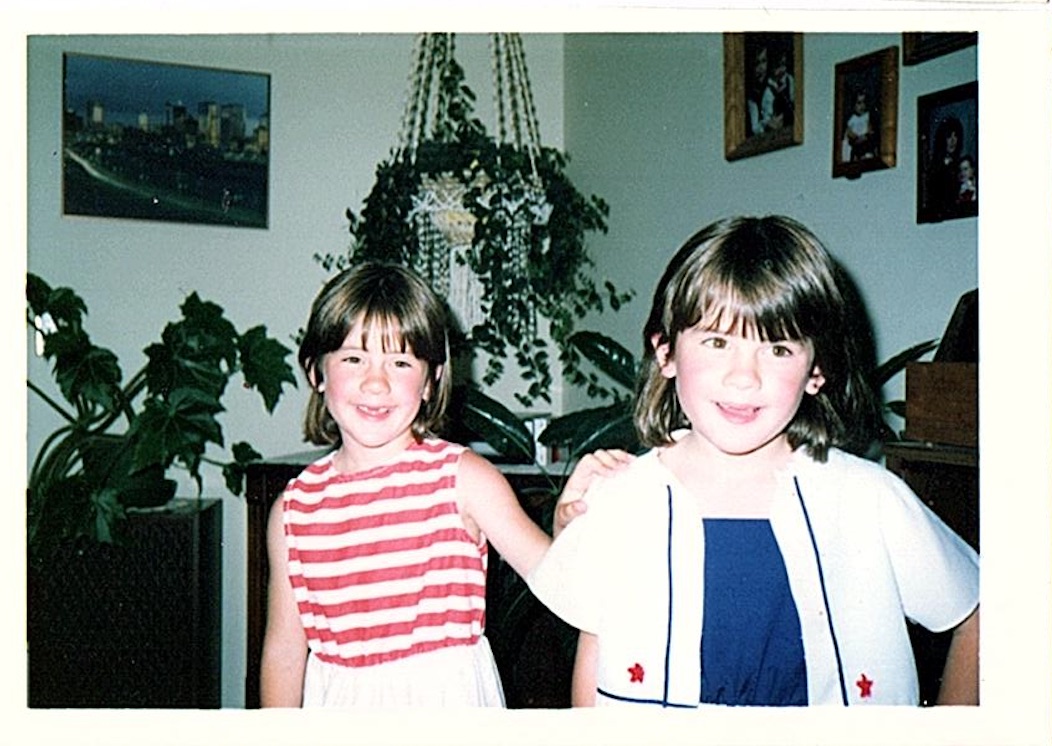 Were you surprised by anything Tegan wrote about your childhood and you?
It was actually some of the absences that I was interested in. I had focused so much on my struggles with my sexuality and my body, the shame, discomfort and the unease I had with myself. That was just not there with Tegan. Her [writing] was centred on the fact that I had a best friend and she didn’t. I was so shocked, like, ‘Is that it?! You didn’t feel like a monster who was hiding her sexuality?’ … I just remember having this assumption that she was going through the same things as me and it was really interesting to find out what she was processing her feelings and experiences extremely differently than I was.

You write very honestly about those struggles with your sexuality. Was that something that was difficult to return to?
It did prove more emotional than I imagined. We talk about this stuff on a surface level all the time. We’re always asked about our sexuality and our adolescence – how we came out and became songwriters. But it was different to sit down alone and think about the answers to those questions, about what it really means and feels like. I definitely felt something like grief, thinking about those early experiences, how traumatised and scared I was about what I knew about myself – and that I’d eventually have to come clean about the fact that I was queer.

When I first got into a relationship with a girl, I could accept that. But when I started to realise that I was attracted to lots of girls, I remember feeling that that was very out of control for me. It wasn’t like my feelings towards one girl was overwhelming, it was more like, “This is going to happen forever, I’m always going to like girls.’ I remember that being such a specific realisation.

How do you think your experience compares to coming out in high school now?
Every day, Tegan and I spend time talking to kids. The way they talk about their lives and bodies and sexualities, it sounds identical to what we went through 25 years ago. There’s this idea that things got easier, that Tegan and Sara are like gay Santas and everything’s great for us. But I feel like shit about myself all the time and I tell kids and parents that.

Sometimes I’ll feel weird about my body, or the way I look in pictures, and that’s homophobia making me feel really bad about myself. Those thoughts come from when I was nine and heard someone talk about women needing to look a certain way, otherwise they look like dykes. I struggled with that because when I was a kid, I wanted to dress like a boy and I didn’t want my body to change. I had that trauma at nine and 11 and 16, so of course I still have it at 38.

Within the queer community, we’re encouraged to talk about the positives. About how we want the same things as straight people. But some of us don’t want those things! Sometimes some of us feel like shit, and sometimes it’s straight people’s fault. 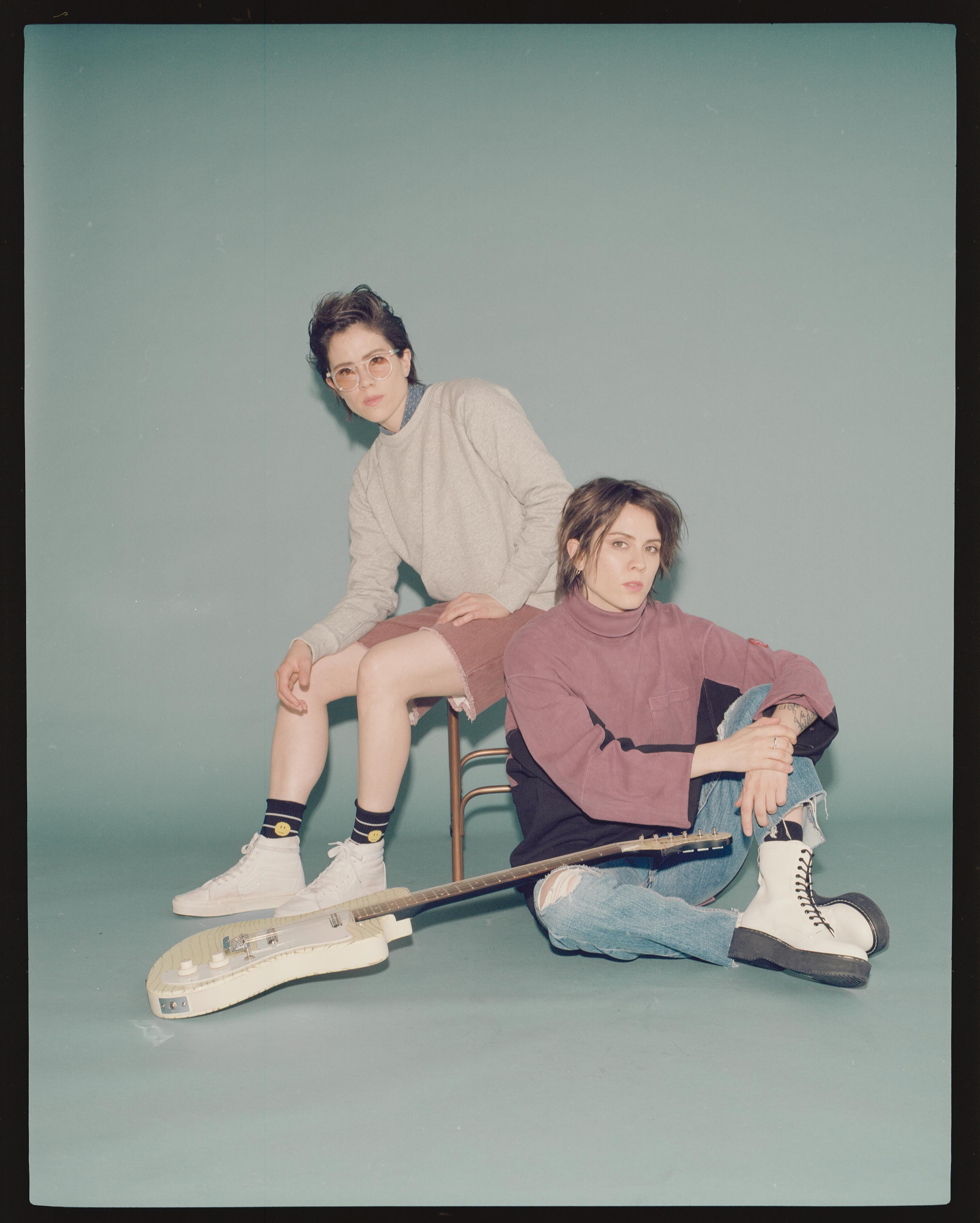 Do you see a connection between your artistic and sexual expression? Especially when you were younger, coming out as queer and as musicians at the same time.
I don’t think I made the connection when I was younger. I probably would have resisted it. But now, it’s undeniable that many of the significant choices we made in our adolescence were the result of the disconnection and confusion over how we felt about our bodies and sexualities. Initially that manifested as experimentation with drugs and alcohol and having sex as a way to cope. I think a lot of those things we were doing was born out of inner turmoil.

Then, I think, music was an anecdote. In some ways, it took up the same space as drugs and alcohol. Music became a way that I could take that trauma and put it into something to use to connect with people and myself. I was expelling things. I would be worried about something, but then I could put it into a song and feel good about myself – even though the thing that made me want to write the song in the first place made me feel bad about myself. I don’t think I completely understood that that cycle was born out of my adolescence and queerness. I think that’s changed now. But it was the nebulas of why and how I became an artist.

If you could go back, what would you say to your younger self?
One of the things I was left with after I had written the book was the feeling that I owed my younger self something. I think I was really hard on myself then – I was suffering so much homophobia and self-loathing when I was a teenager. Even when we started writing the book, I was writing from a place of judgement. I had this terrible self-talk of, ‘Ugh, look at me, I’m so uncomfortable, look at my hair and my body.’ At some point I realised that was the same voice that was in my head during those years of being in school and I felt so sad.

Like, I’m nearly a 40-year-old woman. There was this moment of being like, ‘Look at me, I was so brave and went to school everyday dressed like that.’ I need to be that version of me now. I was awesome and cool and fun. So I wish I could go back and say, ‘Don’t be so hard on yourself – in 30 years time, you’re really going to inspire yourself.’

High School is published by Virago on September 24. The accompanying album Hey, I’m Just Like You is out  September 26 through Sire.

Linkedin
RELATED ARTICLES
OTHER ARTICLES
Ireland’s national sports are modernising. At the forefront of this movement is Na Gaeil Aeracha, the country’s first ever queer GAA club.
The photographer describes taking inspiration from Magnum photographers to craft an intimate and revealing portrait of the city.
We sat down with trans comic Jordan Gray to discuss the power of portraying complex characters, giving humanity the benefit of the doubt and getting naked on live TV.
Photographer Jeffrey Silverthorne always treated his subjects – often those living on the margins of society – with empathy and respect.
Proponents of personality tests argue that they’re necessary to find the best person for the job – but in practise, they’re often discriminatory.
How the sounds of nature, air force bases, walking across the country, Windrush and synthesisers have influenced one woman’s journey through music and life.