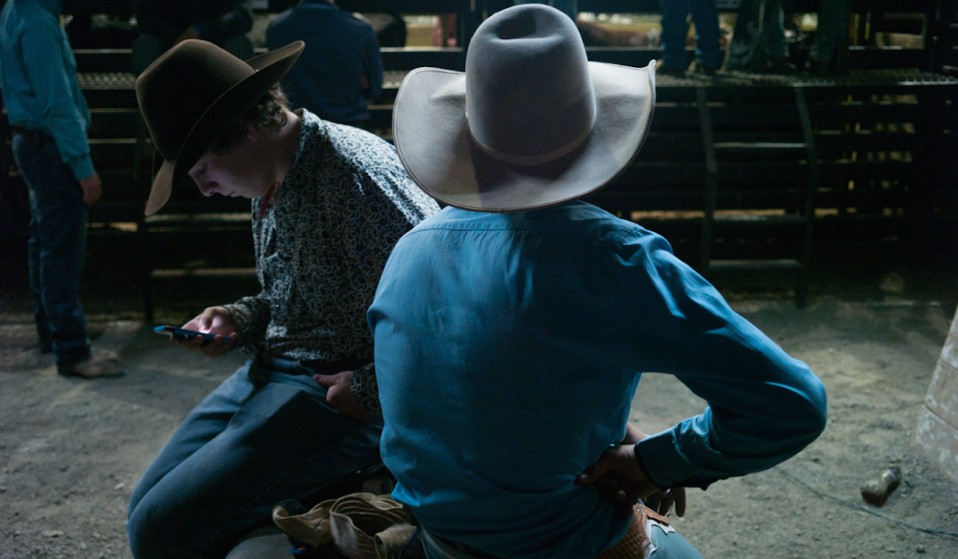 In a landscape far removed from the urban centres, rodeos continue for many to be a way of life.

In a landscape far removed from the urban centres, rodeos continue to be “a way of life” for many. With economic and social changes pulling at the reigns of this dangerous sport, what does the future hold for those dreaming of a life as an all Australian cowboy?

The bulls are brooding and water-falling over one another. At least eight steers in the closest pen. A stirred up, heaving pool of hide and horns. There a young cowboy kneels next to the steel fence gathering his riding gear from a suitcase in the dirt. He is no more than twelve years old. The boy neatly folds his chaps and calmly loops a well-worn rope around the railing like any seasoned rider. 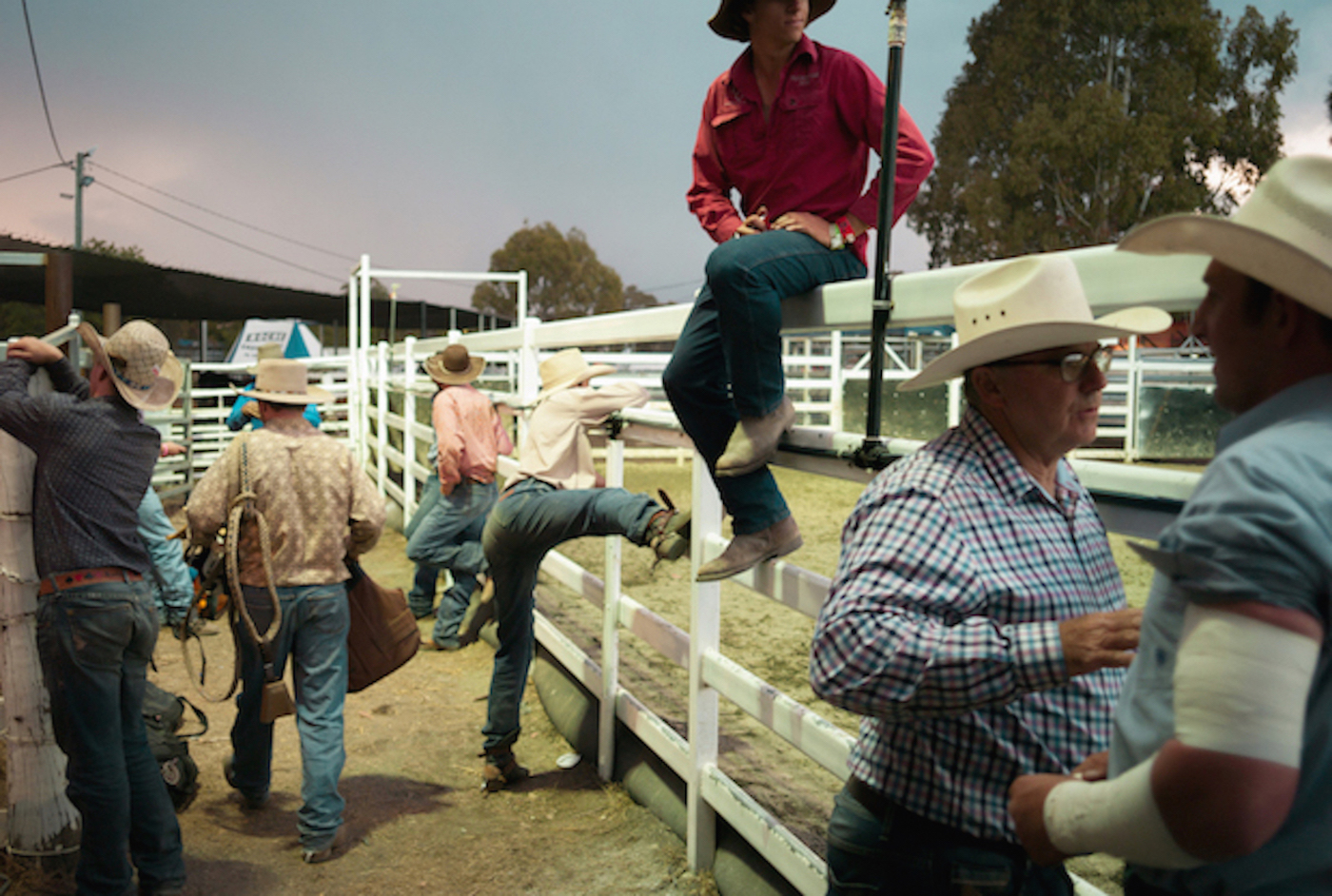 Behind him cowboy Elijah Leather stands back silently with his fingers in the pockets of his jeans.

Every young rider behind the arena dons a cowboy hat, a long sleeve shirt tucked in and buttoned up, tough denim blue jeans, thick leather heeled boots, a country courtesy and a competitive quietness. The youngest of them are playing like children in the playground. Some are on their phones and others are talking rodeo. 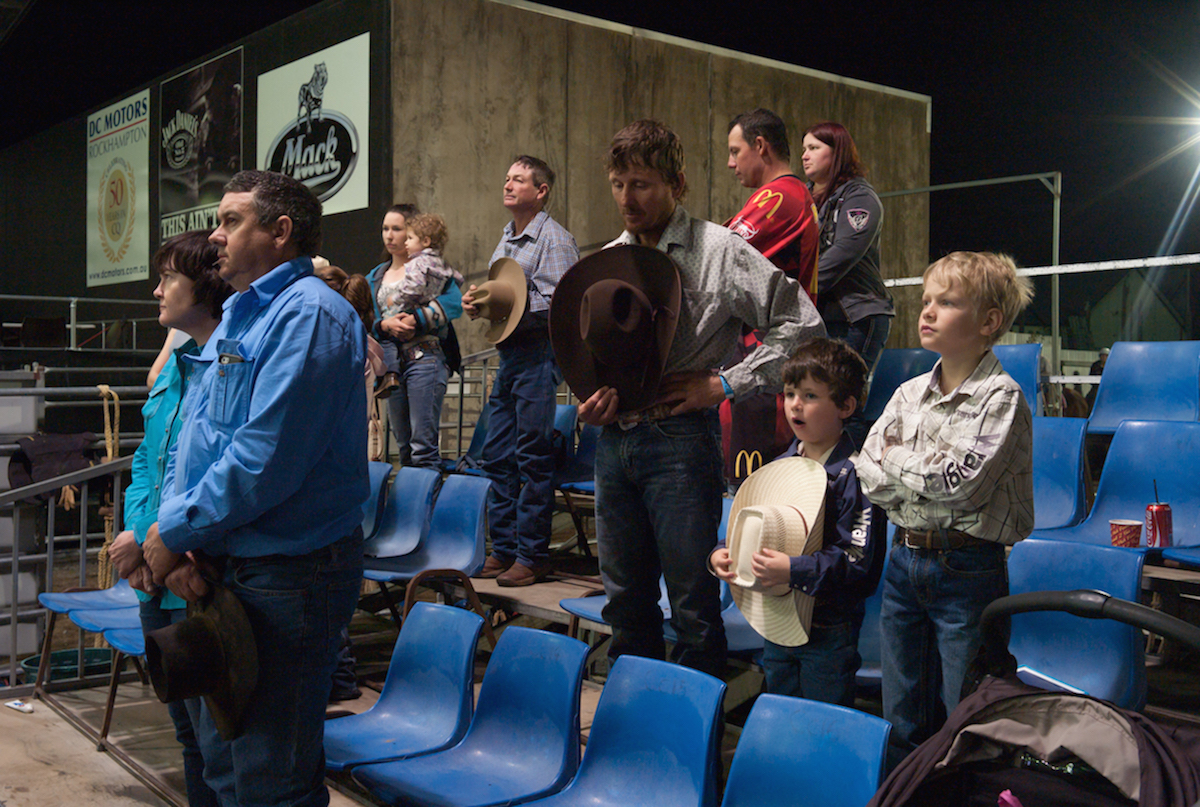 News media logos, Jack Daniels and local business advertisements uncompromisingly colour the walls and gates. The crowd pours in after paying an entry fee. Some go to the bar and others wander to the grandstands.

In their chaps and sponsor laden vests the competitors are called out one-by-one. A trickle of claps for each of them as meal orders are hastily taken over the bar. Everyone stands for the National Anthem and the Australian Rodeo Prayer – the prayer’s roots are Christian, but the tradition is solely a routine – invoking a sense of sportsmanship to “compete as honest as the horses (they) ride, and in a manner as clean and pure as the wind that blows across this great land of ours.” 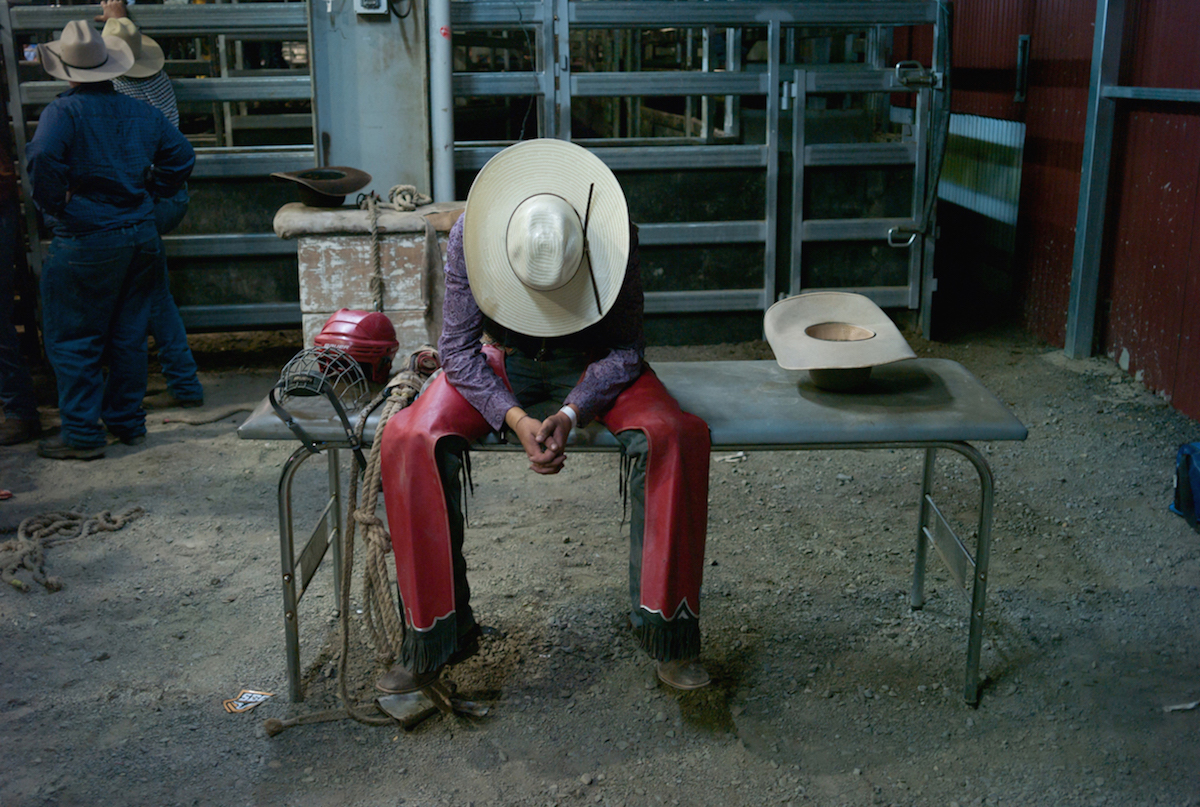 Competing is undeniably dangerous. But to the riders “it’s a passion, a lifestyle.” For them that’s what it means to be a cowboy. To work in the country, travel and ride, and embrace the risks involved. “It’s not about when you get hurt, It’s how bad.” Careers very rarely endure beyond the age of 40. Yet these cowboys are not seeking longevity, they thrive and live in pursuit of the “next eight second journey.” For the crowd, however, it’s all “thrills, spills n’medical bills.” 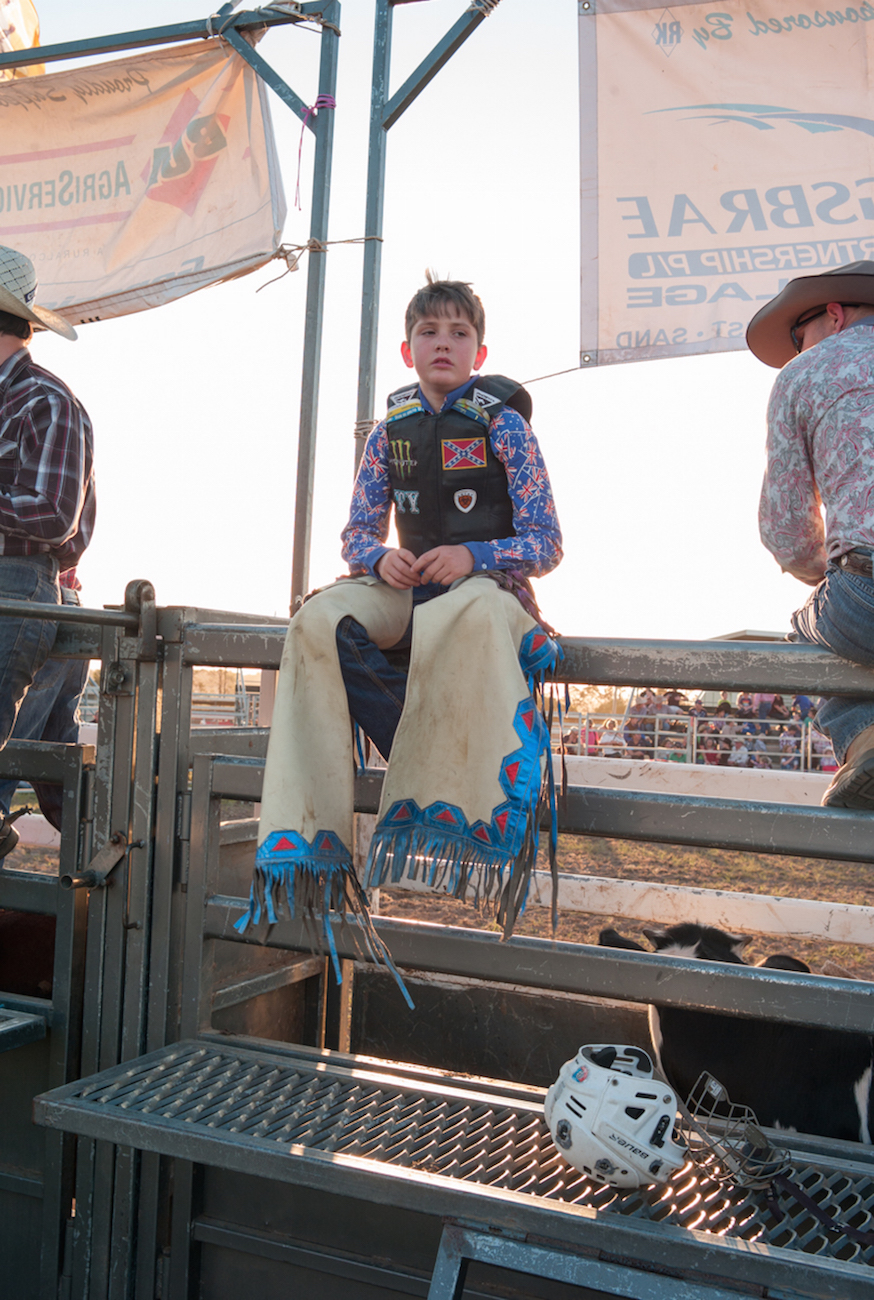 The girls are first. A mother screams for her daughter as a barrel race begins. Pop hits blasting through the speakers. She’s at the edge of her seat in the grandstands, legs stretched, clinching a can of booze. Veins appear from under her hairline and down her neck. The cowgirl she’s watching often leaves her saddle anchored only by the grip of her reins, soaring through the air and turning on a dime. Once the race is over and the cheers subside, the mother’s pride mixes with dissipating adrenaline as she calms-herself-down and reflects back proudly upon the jumbo screen replay. 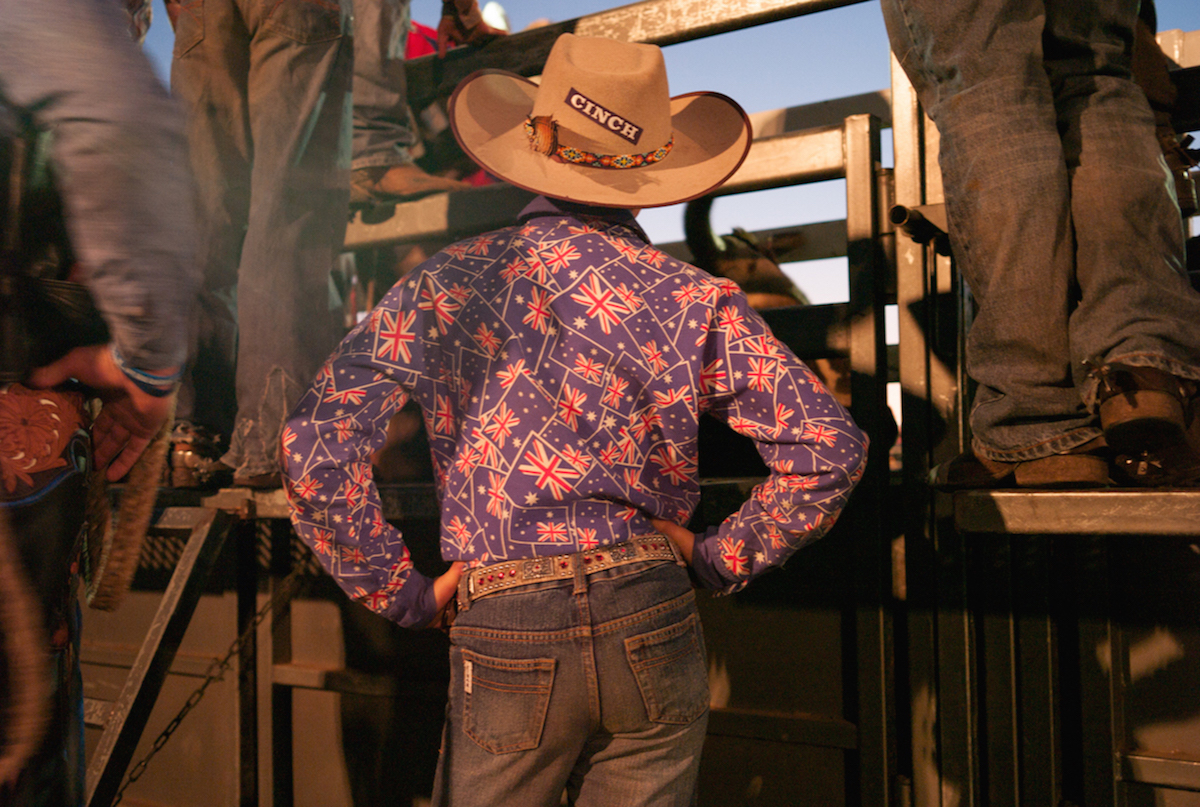 Such events embody the old traditional nature of the rodeo. It is competitive, respectful, and patriarchal. The spectacle is reserved for the end of the night – celebrating animal and male physicality.

The future of rodeos in Australia, however, remains unclear. A “mixed bag of feelings.” In Rockhampton, the rodeos were an incredible example of cultural cohesion for a town suffering from rife unemployment, business foreclosures, and “belt tightening,” spurred on by the end of a mining boom and serious drought which has now spread to 80% of Queensland. 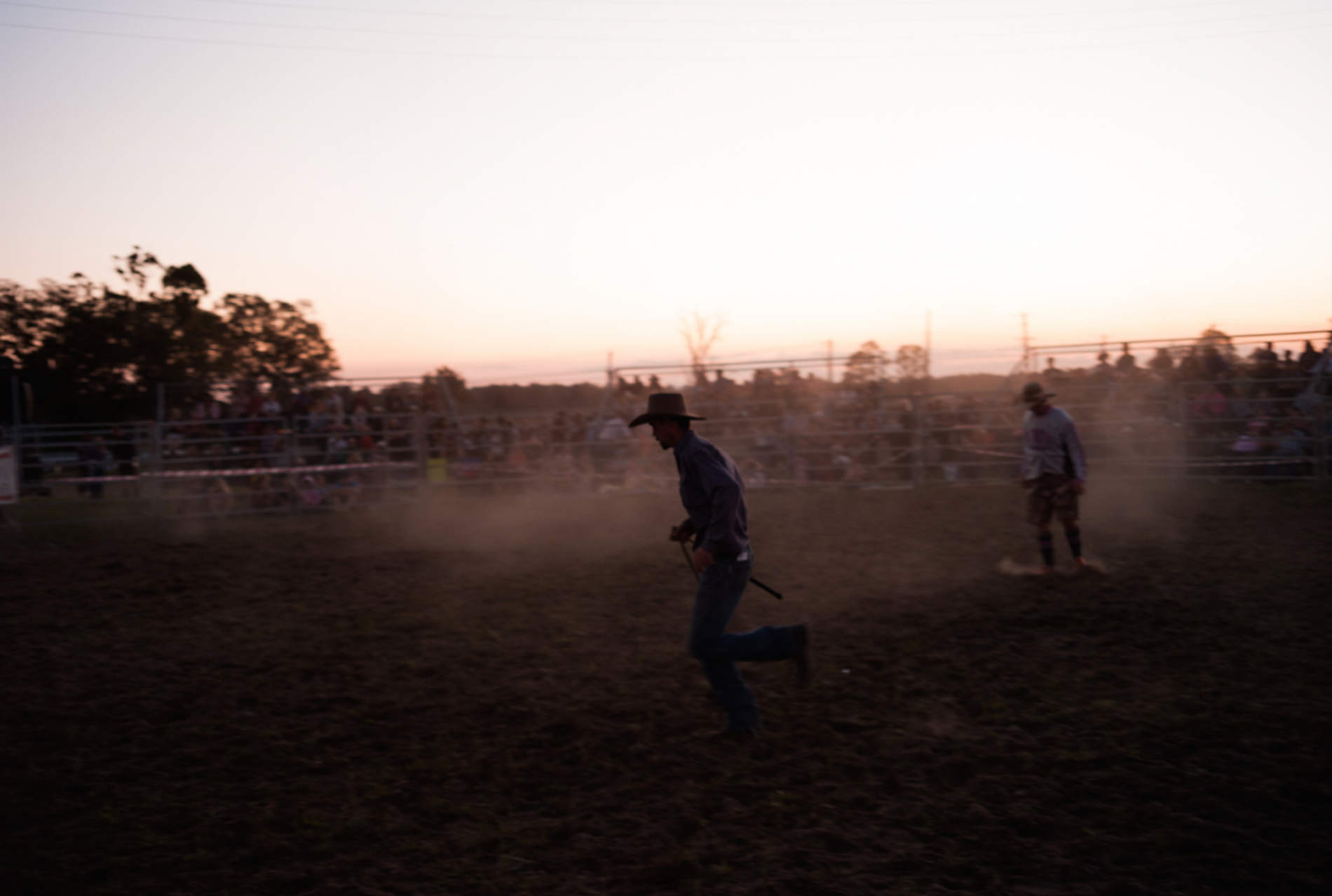 Bucking bull stock contractor Brian Duggan has seen his stock diminish greatly. He says even the number of contractors has dropped to 50 and that the bucking horses’ trade is dire too. Nowadays the stations and ranches use motor vehicles and helicopters, horses are increasingly expensive to transport and “people don’t want buckin’ horses no more.”

There is also a “need to promote the kids,” says father Dean Ward, with “less kids (riding) every year.” Dean’s 7-year-old son Levi is a rodeo prodigy winning 16 rides straight, all- round cowboy at Mareeba, and doing so after breaking his arm and elbow the September prior. He’s not too shy about showing off his trophy belt either. 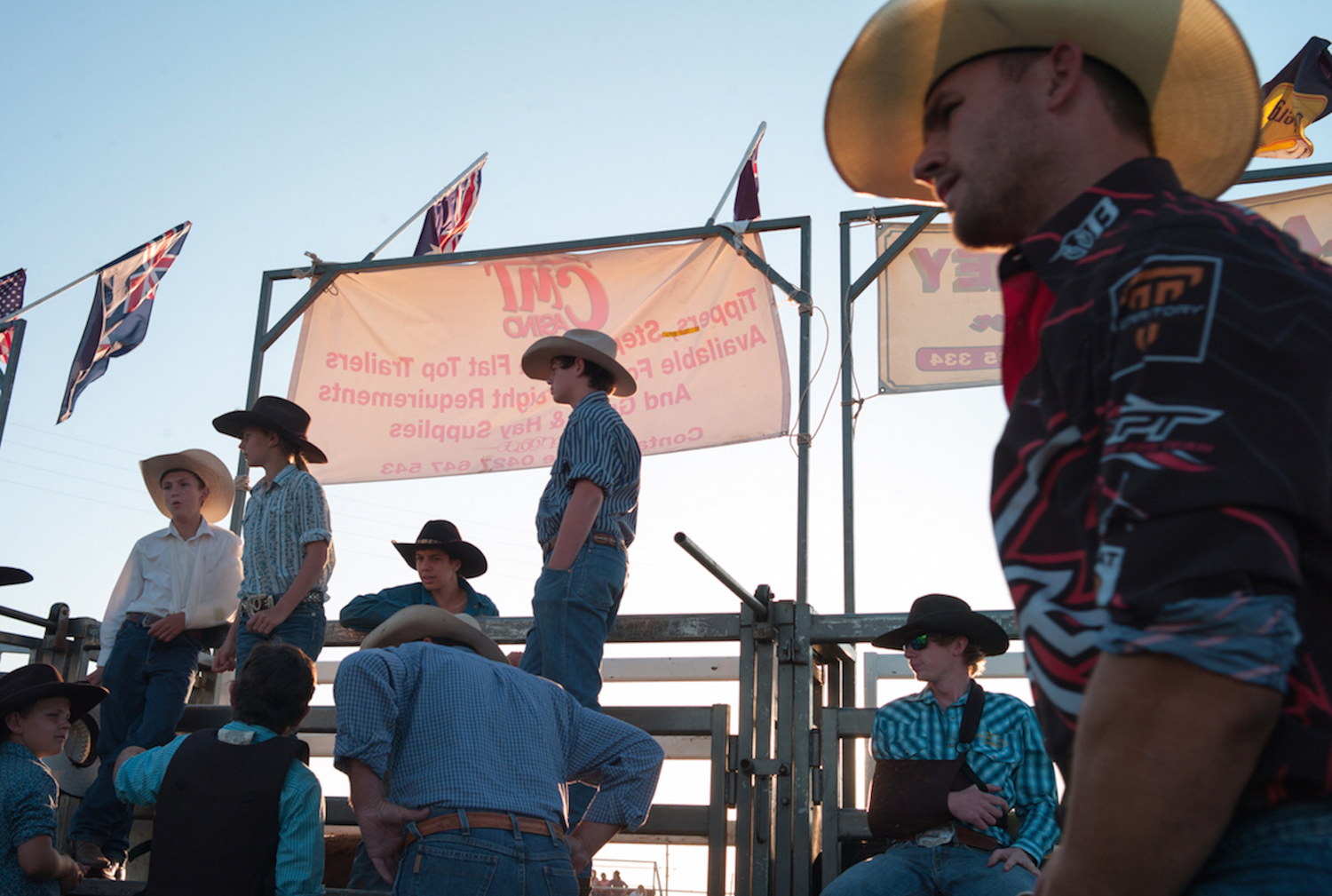 The Ward family travels thousands of kilometres every weekend and the kids often miss school each Friday. “This is his future, I think.” Dean smiles a bit and mentions their letters from school insisting “they need to attend.” Levi tallied 7 wins after travelling 7000 kilometres throughout his school holidays.

Dan Breckenridge, 36, had not competed in a rodeo for ten years. His riding career was on the verge of professionalism when on the 2004- 05 Christmas rodeo circuit, and after a night of “new year’s eve grog,” he competed in the Saddle Bronc. The horse sprinted from the chute carrying Dan for a ride. He came off hard. The bones in his wrist had snapped completely, protruding 90 degrees to his hand. “One bloke threw up,” he said. 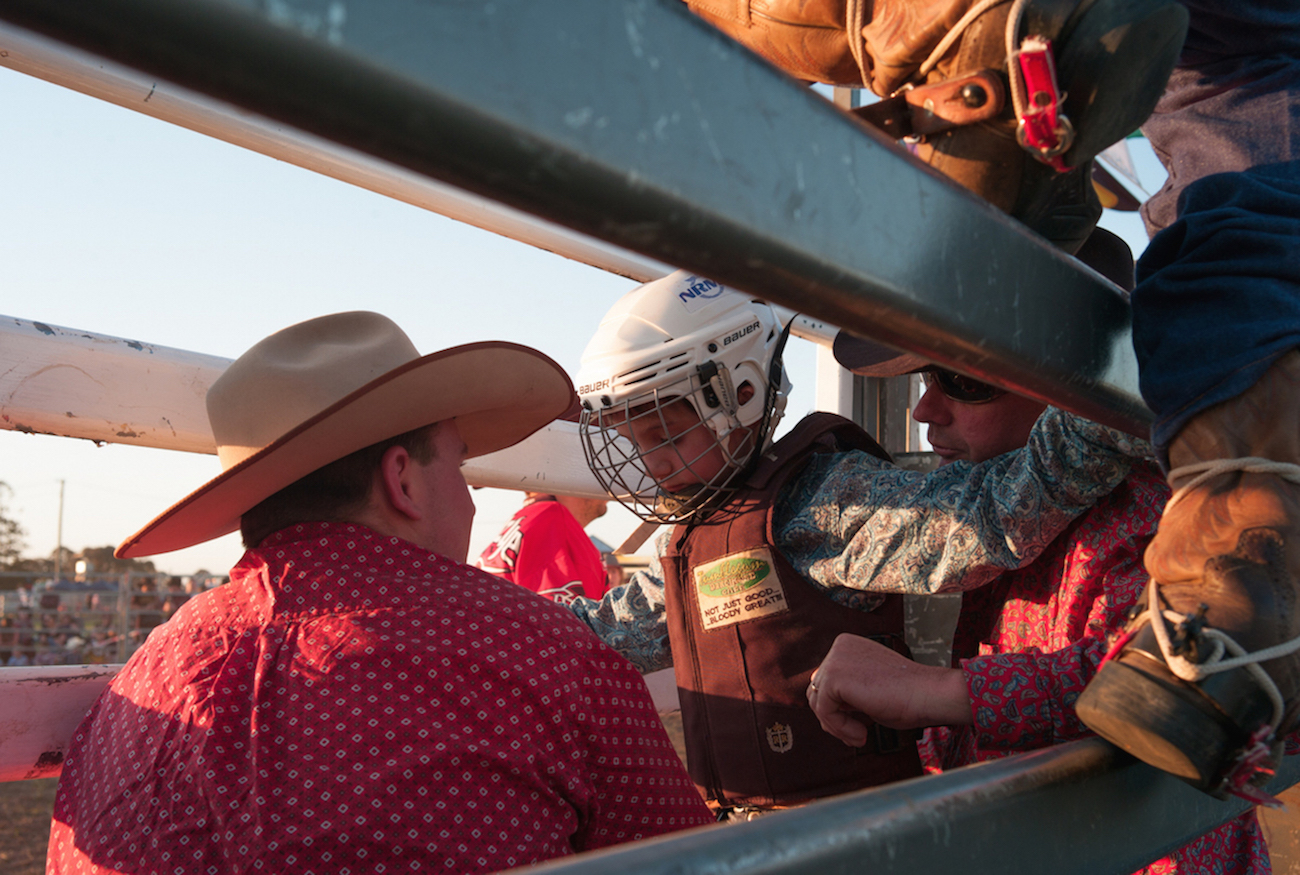 Returning to competition ten years later was Dan’s way to move on, it was “time to have some fun,” he says. Strength of character and resiliency are virtues personified by many cowboys. The rodeo gave Dan the opportunity to rekindle his passion, and to continue the way of life that keeps him going. “You go out there, have fun, and ride your horse. Compete against the animal.”

The dream of becoming a professional cowboy still resonates with many. Ideas of sportsmanship and legacy still hold true. Thousands of kilometres are travelled across this enormously sparse country, priorities are subject to the riding lifestyle, injuries are suffered and long-lasting memories are created by the cowboys that dedicate themselves to the rodeo experience – one, eight second ride each time.

Linkedin
OTHER ARTICLES
Over the weekend, the United Families & Friends Campaign organised a protest calling for an end to deaths at the hands of the police.
Whether it was seacoalers in Northumberland or the miners’ strike, the photographer was always fully immersed in the story he sought to capture.
Jamel Shabazz’s photos honour those who were lost and those who survived one of the most brutal eras in recent history.
A new photo series documents tribes preserving the environment through simple, sustainable practices in central Asia.
The photographer reflects on a decade which saw the rise of MTV and the flourishing of new genres.
We catch up with the singer in her London studio to connect the dots between music, painting and her relationship with the city.