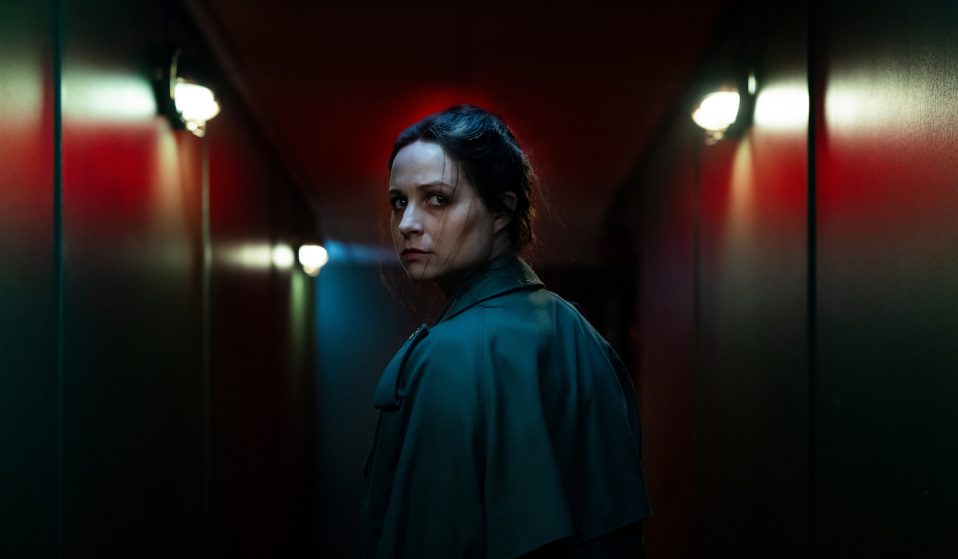 Following the release of ‘Censor’, the film‘s lead discusses the concept of censorship, tapping into her characters’ trauma, and the video nasty craze.

Following the release of bone-chilling British horror movie ‘Censor’, the film’s 29-year-old lead discusses the concept of censorship, tapping into her character’s trauma, and the video nasty craze.

Between starring roles in Censor, one of the gnarliest British horrors in recent memory, and Deceit, Channel 4’s just-premiered crime series exposing one of England’s most catastrophic police ops, Irish actor Niamh Algar is having something of a moment.

For anyone familiar with her work, none of this will come as a surprise. She was riveting opposite Cosmo Jarvis in 2019’s indie slow-burner Calm With Horses, in which she played Ursula, a beleaguered mum in rural Ireland trying to escape the shackles of her roughshod family.

Censor is, in some ways, a natural extension to her existing repertoire. She plays Enid, one of the eponymous members of Britain’s film censorship board in the ’80s, charged with keeping what were deemed to be the most depraved home videos – colloquially dubbed the “video nasties”, a term allegedly first used by ultra-conservative moralist Mary Whitehouse – out of public hands.

Perhaps more intriguing, though, than the film’s political garnishing, is the central study of Enid herself. Initially presented as a stiff upper lip, hair-in-a-bun Tory caricature, soon it’s clear there’s more than meets the eye: she lost her sister as a child, as is revealed early on, and hasn’t quite come to terms with her death. The austerity Algar imbues in Enid, then, is simply the manifestation of her residual trauma.

One tape, by the notorious (fictional) filmmaker Frederick North tips the scales, tearing the flimsy plaster from Enid’s wounded past. She spirals wildly, veering between fantasy and reality – complete with all the blood, viscera and splatter of any great exploitation flick.

With Censor now in UK cinemas, Huck talked to Algar about the video nasty craze, her attraction to troubled characters, and why ‘victim’ can sometimes be a misused word. 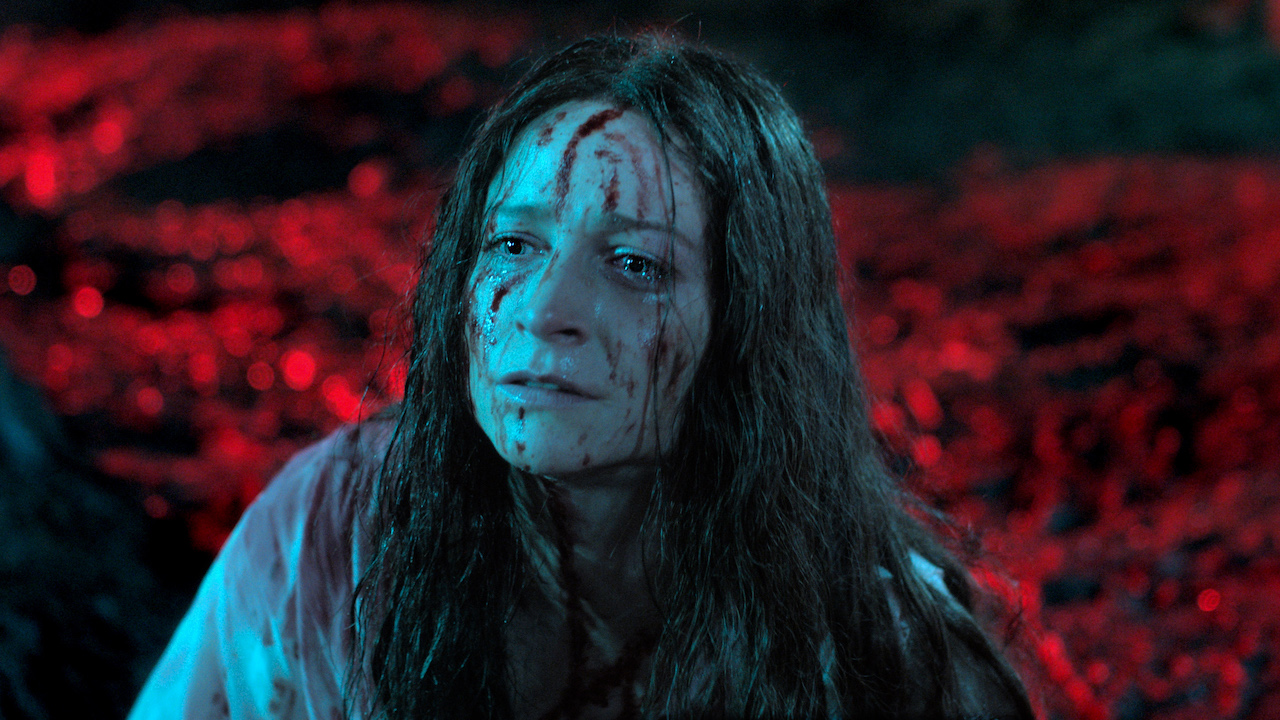 What was the first thing that really compelled you about Enid?

For me, it was to find the answer to why she is so compelled to protect audiences – people, the public – and also the self-censorship of this deep-rooted trauma that the character has experienced, and how it has manifested into her adult existence.

It was the way in which Prano [Bailey-Bond, the film’s director] had explored this character from beginning to end, and had made such a massive, dramatic shift in her psychological journey, but also this physical journey. It was just so compelling to read. And to be given an opportunity like that as an actor, to showcase that capability? You mean, you just jump at the chance, you know. I would’ve done it for free.

There’s a direct throughline, I think, between Enid and Sadie Byrne, your character in Deceit – you seem to go for these characters with a bit of moral complexity, some real depth. Obviously as an actor you want something to chew on, but how did you feel about the proximity between these two?

It’s interesting. I think upon reflection you can’t help but realise that the characters I’m drawn to, from a typical outside perspective, would be seen as victims in some aspect of their lives. But I don’t want to play it that way. I don’t think anyone realises: no one wants to be a victim, no one realises that they are a victim. I think ‘victim’ is a misused word. I think it’s someone who’s actually trying to understand and get through trauma, and when people prevail, that’s when you really showcase your strengths.

I think the easy headline here would focus on the characters being strong women navigating patriarchal spaces – that feels like the most explicit theme, right, and the residual traumas they have…

Yeah, I think everyone has some sort of residual trauma, whether it be small or large, but in their own lives – it’s profound. For Sadie Byrne, her trauma actually comes at the end of the story, so we get to see the journey she undergoes to get to that point. So we have a better understanding of how someone could end up in that position. With Enid, it’s the other way round, where something traumatic happened to her as a child, and she’s trying to work through it.

I don’t see them as these deep, dark characters on an emotional journey. I suppose these are just stories that I’m compelled to portray because someone can watch them, see a part of themselves, and it can help them understand, I suppose emotionally, something that they’re going through. I’m selfish in that way as well. I love the idea of putting myself into situations to learn more about myself. 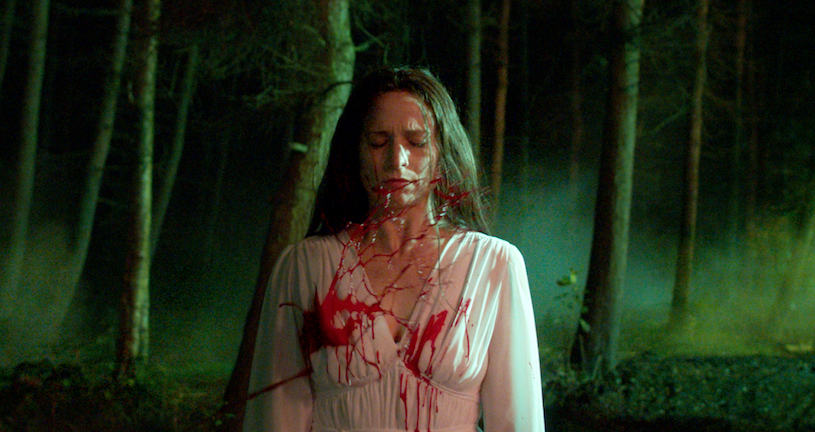 I want to draw back a little to Censor: how familiar were you with the idea of the video nasty, as this big moral craze? Obviously, you were born after…

[Laughs.] I wasn’t aware of it. The whole thing was such a bizarre concept to me: that you can watch something that would trigger you to be inclined to carry out violent acts. Reading the script, I knew I had to go down a rabbit hole of researching video nasties, and especially the censorship of them: it was so interesting to read the journals, and just some of the literature left by the censors. You know, they wrote down how certain things need to be taken out of a film, and specific cuts. There’s a whole language to it, which is very unique to being a censor.

So you were looking at old censorship documents and stuff?

That’s so fascinating. Did you do some proper archival digging?

I couldn’t, unfortunately, but Prano had all the documents and was sending them over to me. What would happen is, say, I’d watch the movie in its entirety, then look at the cuts that would have been removed from it. So you get to see: okay, if that had actually been put in there, would it have changed things? Or how would that have affected an audience? And then there’s the rules and the like – the F-word is an instant 18, but you could have nudity in certain parts, and that’s fine. That’s 16.

It’s this whole concept of censorship, and why we censor certain things and not others. What Prano was encapsulating in this is that you have censorship, and then you’ve got self-censorship, which mirrors one another as like, why we do one thing in order to protect certain parts of ourselves.

I think that reflects in the political backdrop of the film: the underlying contexts of Thatcherism, and this profound moralism. Was that on your mind?

Yeah. Like Prano has established, it’s this mirroring of the proper way to do things, and I feel with Enid, she has this properness to her, she’s very contained, and there’s this mask that she puts up, and it’s keeping all of this trauma underneath. But I think that’s the same way, if you look at it from a society point of view, if you’ve got this massive front up, what is it that you’re actually hiding? What is the deep, dark secret that we don’t want people to know?

In its entirety, it’s a film about grief. With sort of every country, there is a deep-rooted grief. There’s a deep-rooted trauma they’re trying to work through.

Censor is out in UK cinemas now.

Linkedin
RELATED ARTICLES
OTHER ARTICLES
After blocking the Scottish government’s gender recognition reform bill, Westminster is now devising further changes to the law to make it harder for trans people to self-identify.
At his West Bank restaurant, Fadi Kattan established himself as the voice of modern Palestinian cuisine. Now, he’s bringing his innovative, bold flavours to the UK’s capital.
Following the release of his debut single, Deyaz talks battling addiction, dealing with his struggles through music, and building a budding music career from his living room.
As she gears up for the release of her first book, the 24-year-old climate activist talks standing up to authority and building a more inclusive movement.
Tristan O’Neill’s shots of dancers caught in moments of reverie at the height of rave’s golden age are a testament to the UK’s legendary club culture.
Since 2007, Gideon Mendel has made 20 trips to document floods in 13 countries. The result is an alarming record of what has already been lost to the climate emergency.