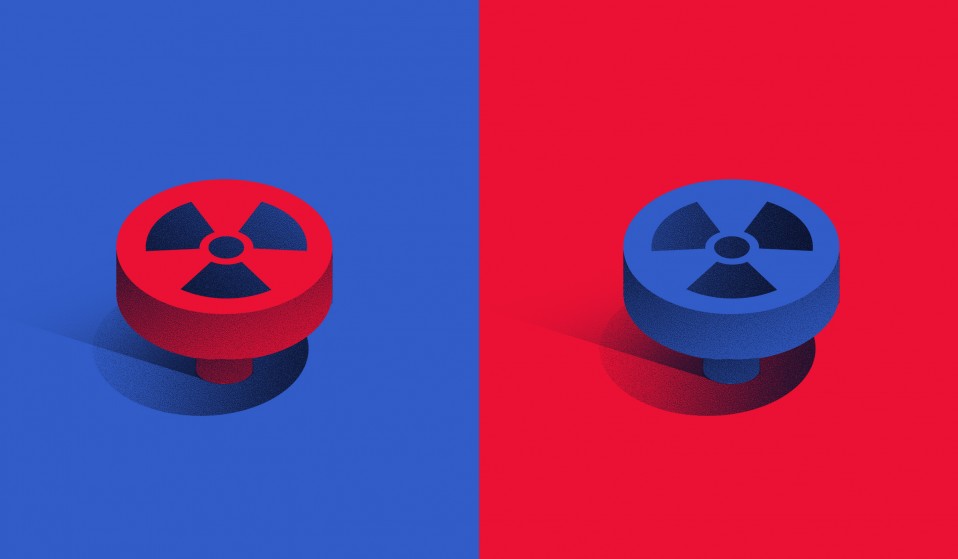 On the brink of nuclear warfare, the restraint of two deluded narcissists - Trump and Kim Jong Un - is all we have to protect us from destruction and doom. To the bunkers?

Reports say we might be on the brink of nuclear warfare, the restraint of two deluded narcissists - Trump and Kim Jong Un - is all we have to protect us from apocalyptic doom. Is it time to head to the bunkers? James Butler argues we should probably never have left.

When I was a child, I read books about nuclear war. Not in the way that the slightly worrying, quiet kid in the class does with undisguised enthusiasm, but simply because they were there.

At ten or eleven, I spent my time uneasily captured by surprisingly lurid descriptions of the immediate aftermath of nuclear holocaust, and the varied fantasies of what miserable future the survivors might scratch out in the rubble, the genetic novelties and monsters produced by an irradiated world. In a post-Cold War era, the threat had apparently passed; I remember asking, with all the earnestness of a child, whether people still had nuclear weapons. The answer did not comfort me, nor the thought of them still sitting in submarines or silos, waiting for their launch codes. It is such reading I credit for my naturally sunny disposition.

However grave and serious a child I was, it feels of late like I was right to be worried. Anti-nuclear campaigners have always warned that the outbreak of nuclear war can arise either out of conventional military aggression, or as an unintended consequence of international brinksmanship.

An international order which includes both Donald Trump and Kim Jong Un magnifies both possibilities: Trump’s warning of a ‘major, major conflict’ with North Korea, as well as his threats to send an ‘armada’ to the area, will have caused some stomachs to flip over; North Korea’s own missile testing, however unsuccessful, will have done the same. In the midst of nuclear bluff and threat, one is left to put one’s faith in either the restraint of the US military hierarchy or the technical ineptitude of the Kim regime. Neither is a source of comfort.

Yet most striking is nuclear war’s passage back from unthinkable to thinkable. The crackbrained wisdom of a decade ago – that nuclear war was effectively impossible because the globally distributed threat of total annihilation made it irrational to pursue – has decayed into reassurances about superior strength, or even vague talk about a first, surgical strike.

In Britain, the renewal of the Trident nuclear missile system is a perennial political controversy: it ought to be more so now, given its functional dependence on the US, effectively tying us to whatever incontinent spasm passes through the Trump White House.

Instead, we have had Tories uncoiling themselves through the morning shows, dripping poison about the need to be able to push the button, and of Britain’s willingness to undertake a nuclear first strike. This latter comment – made by defence secretary Michael Fallon last week – ought to be understood as irresponsible posturing, vague enough to ratchet up an already tense international order.

Media and political common sense on this issue is so far through the looking-glass that Labour leader Jeremy Corbyn’s insistence he is unwilling to kill millions of people is treated as if it’s an anomaly – whereas it is the sole serious and moral position.

For a nuclear war would kill millions. Even the lowest-order nuclear event – a terrorist device enriched with nuclear material – would have the potential to kill hundreds of thousands (since 1995, the IAEA reports nearly 3,000 cases of lost, stolen or misused nuclear/radioactive material). Far worse than this, with Trump’s fear-mongering about the need to ‘update’ the US’ nuclear arsenal, and a proposed budget which boosts investment in nuclear weapons by $1 billion, the ‘second nuclear age’ some security experts have long predicted looks to be on the horizon.

Beneath the immediately catastrophic scenario of global nuclear war, even a so-called ‘regional’ war between lesser nuclear powers would produce massive amounts of black soot, wreaking enormous destruction on ecosystems, putting two billion lives at risk of global nuclear famine. The mild successes of non-proliferation treaties in preventing a further spiral of armament has removed nuclear policy from the forefront of popular consciousness, and kept scenarios like these from active consideration – yet as such treaties look less and less stable, their likelihood increases.

It is hard, and perhaps a fool’s game, to guess at either Trump or Kim’s mind, but to consider them is to realise a weapons system which depends, finally, on the wisdom, forbearance and sobriety of our leaders is a recipe for danger. Famously, the launch of nuclear weapons during 1962’s Cuba Missile Crisis was averted only by a quirk of command structure, and the refusal of one man, Vasili Arkhipov, to authorise the trigger. Such moments are worth underlining, because they indicate how fragile the nuclear peace is.

Other incidents – the 1979 NORAD crisis, 1983’s Operation Able Archer – indicate how inextricable paranoia and panic are to nuclear operations, and how often they have brought us close to the brink. There is no reason to think either of these are things of the past.

Even if the international order is now more unpredictable than it has been for some time, then the odds of an outright war, and especially a nuclear conflict, in the Korean peninsula are still low. There are scenarios – a spiral out of low level conflict, like 2010’s incidents in the Yellow Sea, or the US becoming convinced of a change in North Korean posture – in which things can heat up considerably.

Some analysts, attempting to divine reason where little exists, guess that Trump is aping Nixon’s ‘madman theory’ – the attempt to convince Ho Chi Minh that the US would drop the bomb if it could not find a way to finish its war in Vietnam. Yet it did not work, and there is no reason to believe it is any more effective now. Rapid escalation, and an international strategy based on rhetorical extremity and threat, ought to be a major fear.

The world which produced the books I read as a kid – the world of Mutually Assured Destruction, of threat of nuclear winter, of untold human cost – never receded as far as we might once have believed. The protest movement it produced, though never achieving its final aims, ought also to be on our mind.

Peter Kennard’s famous CND posters of human skulls grinning through the mushroom cloud, EP Thompson’s clear-sighted naming of the ideology and production of nuclear weapons as ‘Exterminism’, the mass protests at Greenham Common – these are the legacy of a world which knew the danger and cost of these weapons, and knew that the only solution to that danger was that they be put beyond use for all of us. We must rediscover that cause.

Linkedin
RELATED ARTICLES
OTHER ARTICLES
Students are being left to languish in unsafe housing, in some cases leading to serious health complications.
Photographer Bud Glick recounts documenting everyday life in the area, and what it taught him about the Chinese immigrant experience.
As the Criminal Bar Association enters its fifth week of action, criminal barrister Russel Fraser explains why the legal professionals have walked out and how action is likely to escalate.
With the UK now set to run out of vaccines, people working in the sex industry – particularly outside of major cities – have been left especially vulnerable, reports Brit Dawson.
Yesterday, rail workers came together to protest poor pay, working conditions and job cuts in their latest round of strikes.
To mark the premiere of his new documentary on surfing giant Gerry Lopez, the filmmaker and former pro skateboarder sits down to share his unique brand of wisdom.