Art & Culture / On the road with America’s female truckers 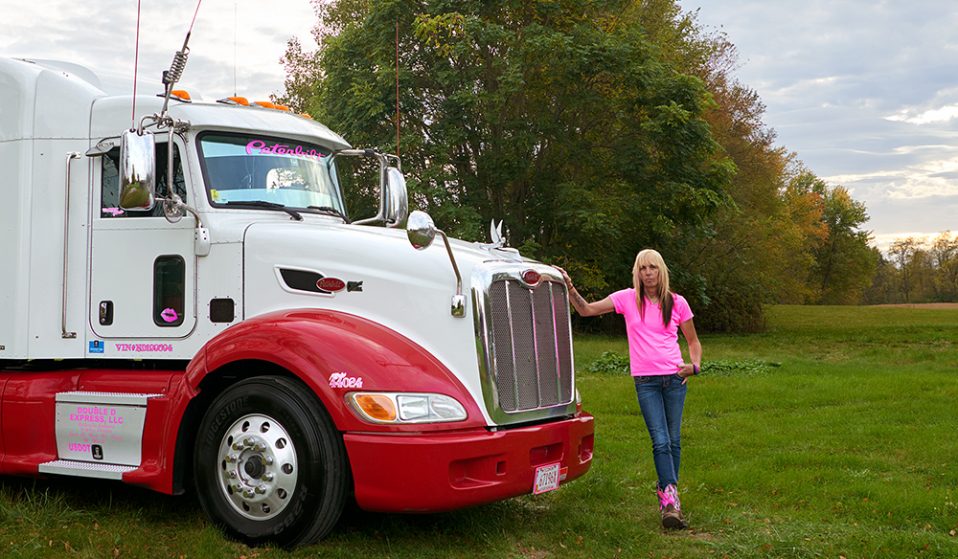 Photographer Anne-Marie Michel captures the women who through determination and strength are forging their own way in a male-dominated industry.

Photographer Anne-Marie Michel captures the women who through determination and strength are forging their own way in a male-dominated industry.

During the summer of 1998, photographer Anne-Marie Michel and her sisters piled into the car for a cross-country trip that would change their lives. Michel, then 14, took her place in the front passenger seat to help her recently divorced mother navigate their 1,400-mile journey from an affluent Houston community to the small town of East Liverpool, Ohio.

“We did it in four days,” Michel recalls of the journey that took them across seven southern states. “The trip a pivot-point in my life. I realised we have autonomy, and that when things get tough be resilient, keep moving, and find a solution.”

Two decades later, those formative experiences stayed became the source of inspiration for Sisters of the Road, a collection of 40 portraits and interviews with America’s female truck drivers. 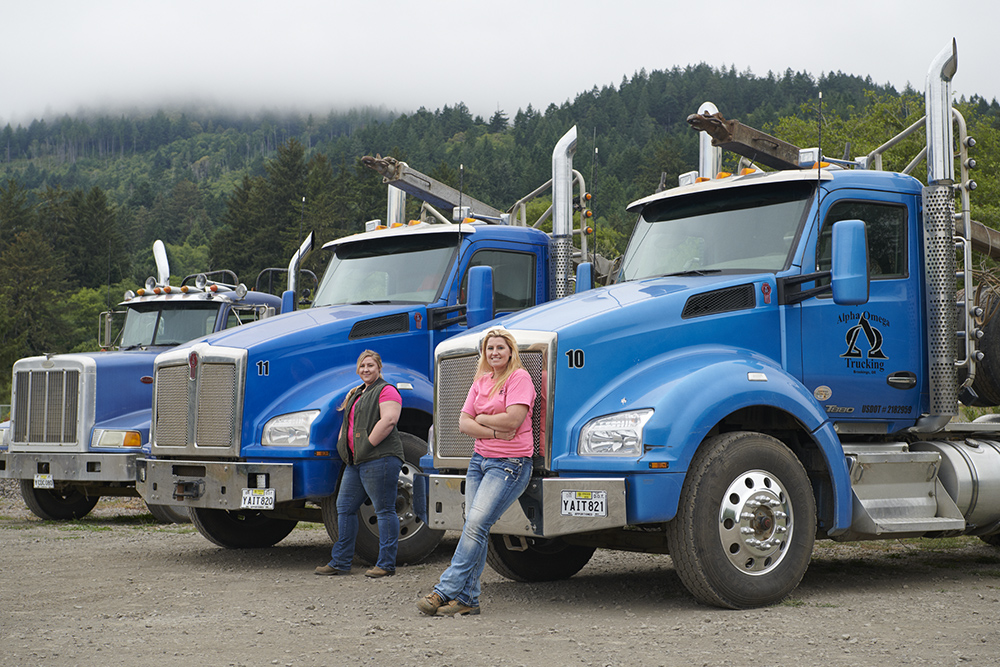 The book began as a personal project that gave Michel a sense of fulfilment she didn’t find in her work as a fashion and celebrity photographer at the time. “I really wanted to make images that meant something to me,” says Michel. But meeting women, who made up just seven per cent of the workforce, proved a challenge all its own.

“My initial plan was to hangout in truck stops and speak to them as they came arrived,” she says. “It was like finding a needle in a haystack. I waited for days. When I did eventually see one, I ran across the parking lot waving my arms trying to get her attention but of course she ignored me and kept driving!” 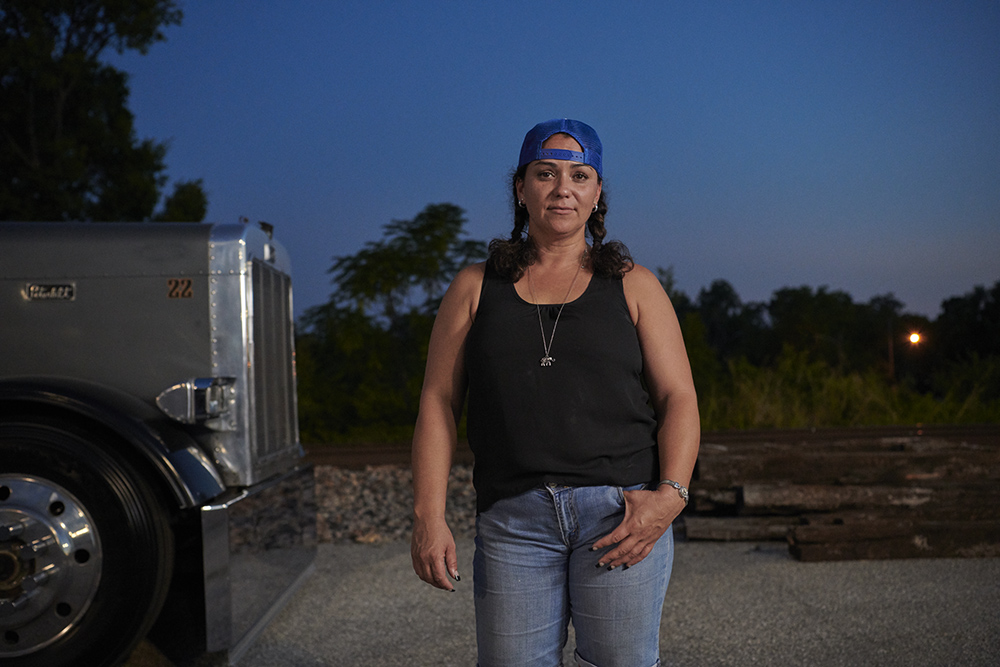 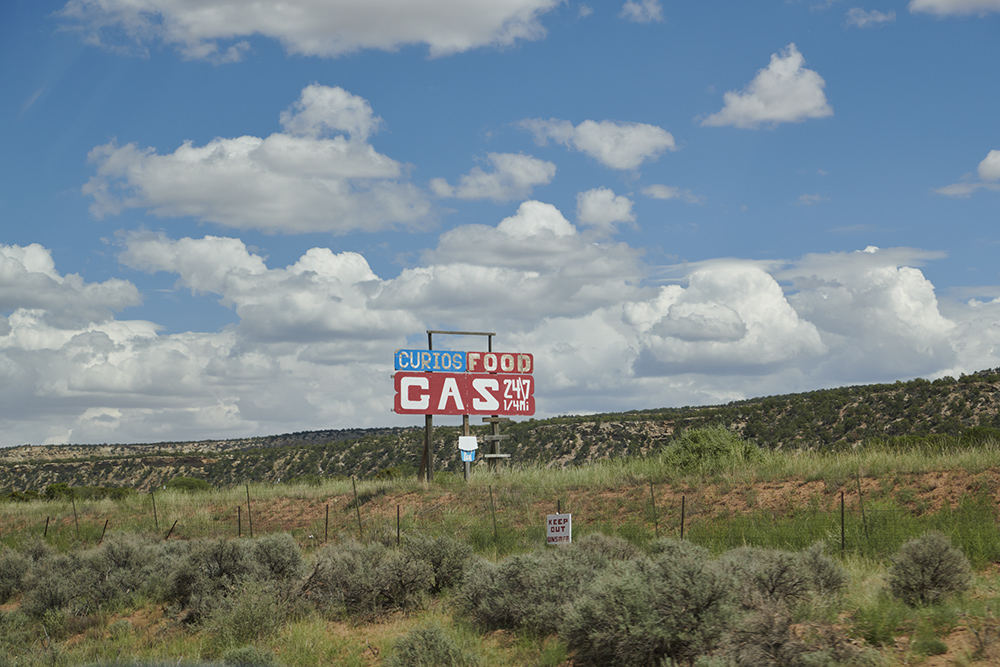 Undeterred, Michel kept on, building connections through word of mouth over a period of five years. “I still keep in close contact with the women and keep them up to date,” she says. “This project is important to them too.”

In Sisters of the Road, Michel advocates for the women, whose proximity to men in isolated and confined spaces makes them vulnerable to sexual harassment sexual assault, and rape during training sessions. “These women have been attacked and had their rights subjugated,” she says.

Michel shares the story of trucker Desiree Wood, who founded Real Women in Trucking and is actively working to help enact laws to protect aspiring truck drivers so that other women do not have to suffer as she did. 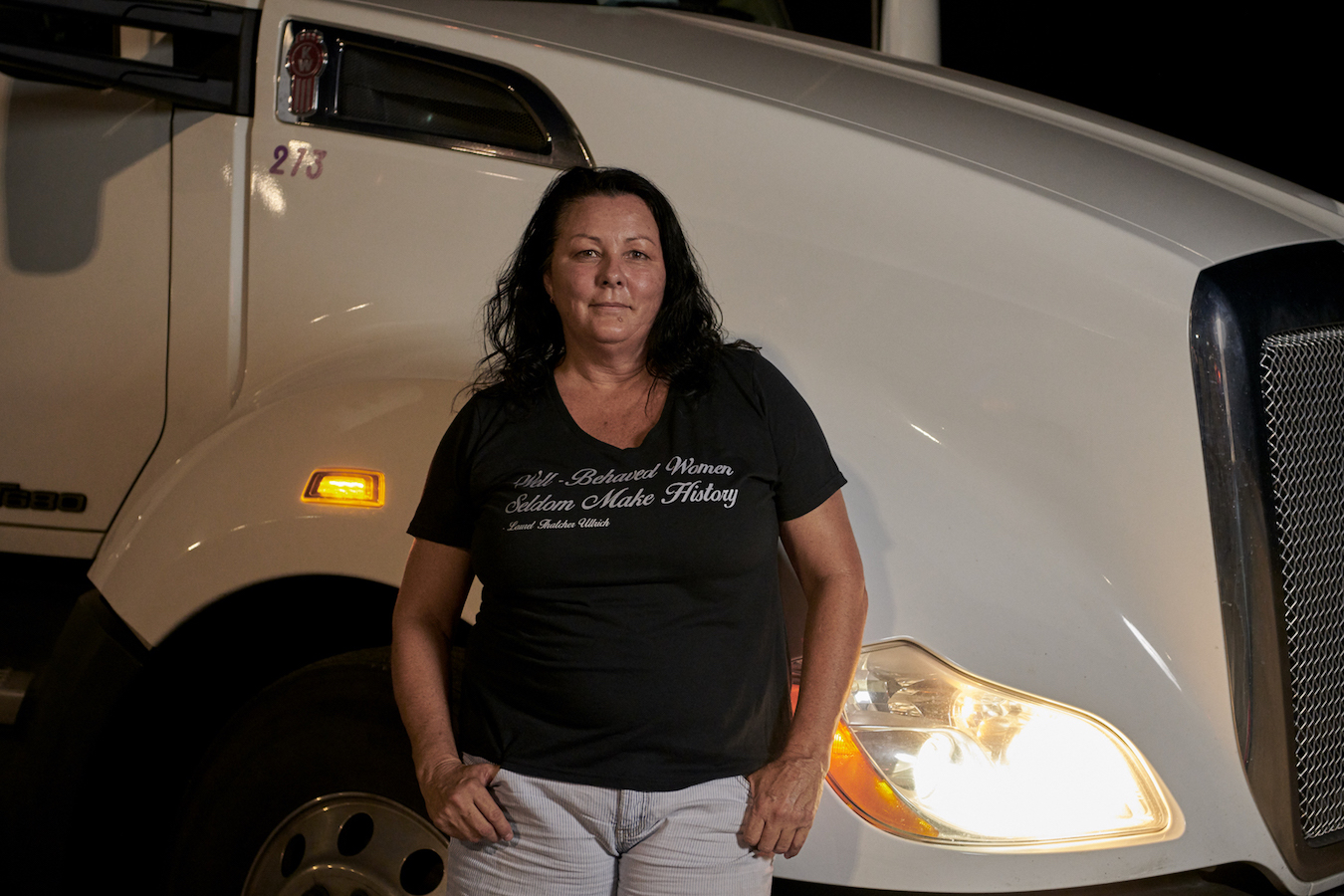 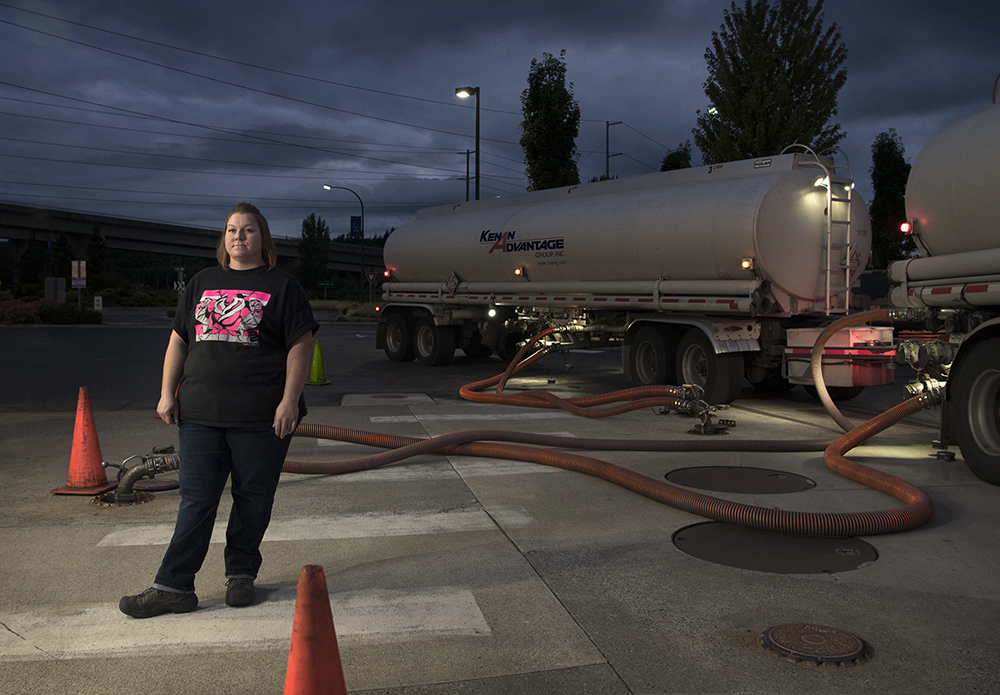 “Congress must stop funding truck driver training programs that use students for team driving where they have excessive turnover, do not produce qualified candidates and have numerous sexual misconduct allegations,” Wood says.

“They must start collecting and analysing this data to see if it is an industry wide issue where women fall through the cracks and predators vanish back into the truck driver population and then harm someone else. These sexual predators bounce from company to company with a clean slate. This is wrong.”

By spotlighting these women’s lives, Michel shares their courage, determination, and strength, finding wisdom in the ways in which they confront and address the challenges of working in a male-dominated industry. 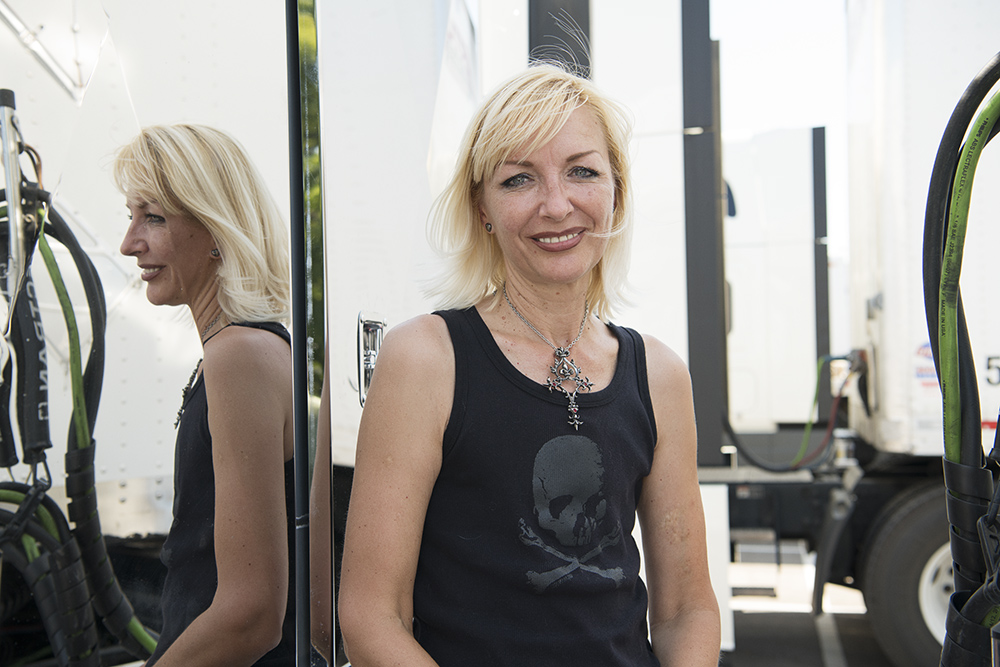 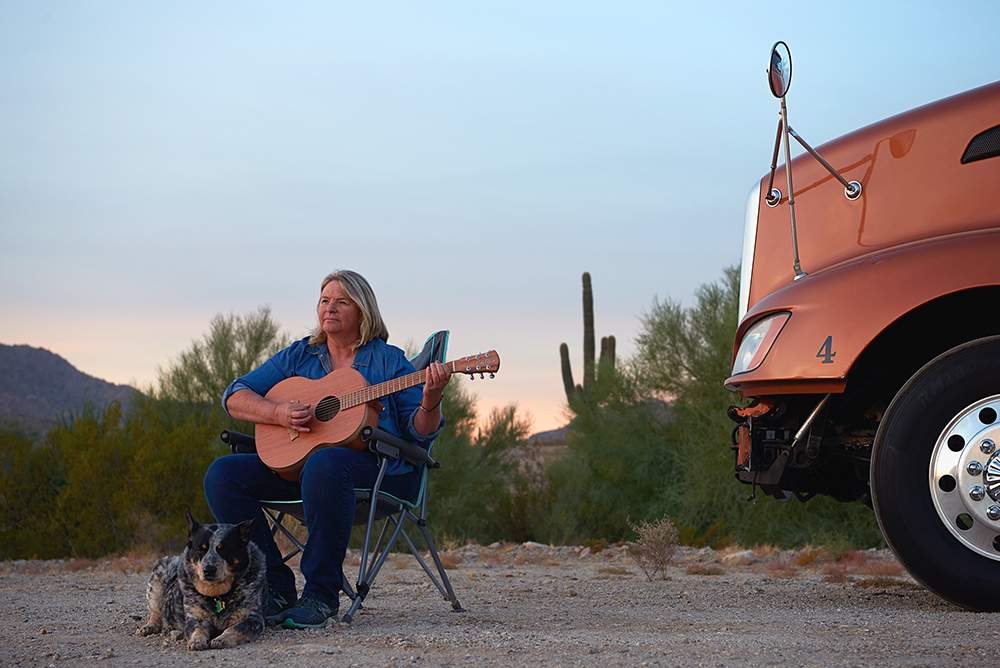 Linkedin
RELATED ARTICLES
OTHER ARTICLES
Protestors gathered outside Downing Street following the latest atrocities committed by Israel against Palestinians living in the besieged strip.
Yesterday, rail workers came together to protest poor pay, working conditions and job cuts in their latest round of strikes.
Following the release of his latest album, the rapper talks about finding a new approach to songwriting, attitudes to poverty, and why his music is more than a political statement.
From the chip shops, to the bingo parlors and burlesque dancers, photographer Mike Coles remembers capturing scenes of holidaymakers by the English coast.
Photographer Bud Glick recounts documenting everyday life in the area, and what it taught him about the Chinese immigrant experience.
Photojournalist Fiora Garenzi spoke with people still living in Eastern Ukraine, an area which seen some of the heaviest fighting since the war began.