Art & Culture / On trans rights, the media lags behind the public 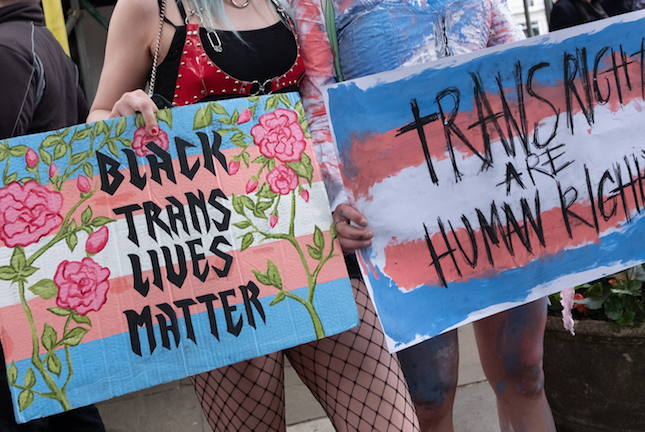 A new report has found that the majority of Britains approach trans issues with compassion. It’s about time this was reflected by our media landscape.

A new report has found that the majority of Britains approach trans issues with compassion. It’s about time this was reflected by our media landscape.

A new study has found British people are not as divided on trans right as the media would have you believe. In fact, the report illustrates quite clearly that the general public is compassionate and respectful towards people like me, and want to create an inclusive and welcoming society for transgender people. When I read the report this morning, I was filled with hope.

Most people in the report published by More in Common said that they recognise that trans people face many challenges in life, and we as a society need to continue creating a more safe, accessible and equal society for trans people to thrive.

Despite trans people regularly being portrayed in the media in a negative light, the general public wants to find inclusive and practical solutions to many of the challenges trans people encounter. They aren’t interested in toxic debates or the divisive ‘gotcha’-phrases the media is so stuck on.

The report showed heartfelt recognition of the struggles trans people face in society, and the discrimination and bigotry we often face for being who we are. Recognising and understanding this has never been more important. Hate crimes and prejudice against trans people have been on the rise in the UK in the past few years, often fuelled by negative media coverage and misleading narratives about our lives.

Most importantly, the report shows that bigoted and opposing views against trans people are an absolute minority – and that far, far more people support a society where trans people are treated with dignity and respect, and where we are safe and included.

Today @Moreincommon_ we have published Britons and Gender Identity. Based on polling of over 5,000 people and focus groups across the country. We found the current divisive online debates simply don't reflect the way the public think about trans and gender identity. (1/n) pic.twitter.com/WAWWACMazd

Our current media landscape is fundamentally misleading about trans issues, and the content and tone of coverage does not reflect the prevailing social attitudes held by people in society. On the contrary, trans inclusive policies and initiatives are slowly being mainstreamed into schools, workplaces and institutions across the UK.

There are so many examples of organisations and institutions – be it schools or places like the Women’s Institute – where conversations about gender identity are done well, people feel heard and trans people are supported. It’s high time the media platformed these examples and helped us all to learn how to better navigate this space together.

We’ve seen the importance of this kind of work across popular culture, in TV shows like Emmerdale, Sex Education and Heartstopper. We need more of this kind of media; media that is celebratory and reflects the realities of being trans in the UK today.

There are organisation that support such positive outcomes with their work, such as All About Trans, run by the charity On Road Media, or Diversity Standards Collective, which offer open, positive and engaging interactions where media professionals can learn about trans issues in a constructive environment – and it’s never been more important than now to get things right.

What’s clear is that our media conversation is stuck; we have the same conversations again and again, which so often don’t include trans perspectives and just fuel division and polarisation. One of the things that didn’t surprise me in the report was the willingness from the general public to listen and learn, and to be able to create spaces to have open conversations about gender identity where everyone can be heard.

As someone that does a lot of public speaking, I know that people are desperate to learn and ask questions about trans issues. People are often scared to offend and make mistakes, but I personally think it’s incredibly important to create spaces where people can ask whatever questions they have so that together we can learn and move forwards to a more inclusive and welcoming society for everyone.

To do this, trans people need to be included in conversations about our issues, and that the challenges we face are highlighted. Because sadly trans people still face discrimination in most areas of life – within their families, at work, at school or when accessing healthcare.

We just want to go to work and feel safe to use the bathroom, walk down the street without fearing insult or violence. We want to go to the pub with our friends, go swimming on the weekend, marry the people we love, have families and enjoy life. For those that take the time to get to know us, they’ll soon realise that we share the same hopes, fears and dreams as most people – and that the fact we are trans is but one part of our identity, and there is so much more that we have in common than we realise.

Linkedin
OTHER ARTICLES
The curators of a new exhibition are hoping to shed light on Plymouth’s vibrant but often overlooked nightlife.
In the latest instalment of Photographers in Conversation, the chronicler of raves, protests and beyond explains why he’s drawn to such specifically visceral environments.
Finland-born photographer Sirkka-Liisa Konttinen looks back on her decades-long documentation of life in Northern England.
Over a dozen Stop Deportation activists locked themselves to each other outside a detention centre to prevent coaches taking those due to be on the Rwanda deportation flight from leaving.
The author discusses the all-consuming nature of heartbreak, and turning the experience into an incisive exploration of love and loss.
Freddie Miller’s new series of photographs investigates who today’s trainspotters are and what drives their unfettered enthusiasm.