Art & Culture / Palestinians are rising up against Israeli police 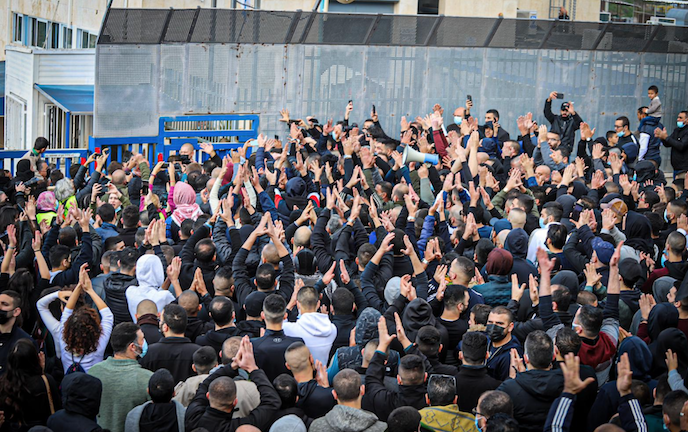 The Umm al-Fahm protest movement is taking a stand against Israeli police for their discriminatory tactics and for abetting a rise in organised crime within the community.

Since January, the growing Umm al-Fahm protest movement has been taking a stand against Israeli police for their discriminatory tactics and for abetting a rise in organised crime within the community.

As in many Palestinian towns inside Israel, the 56,000 residents of Um Al-Fahem have experienced a horrific ‘norm’ for years now: loan sharks, mobs, arms trafficking, drug dealing, armed robberies, murders, and shootings have become a daily routine, turning everyday life into hell. Despite its peaceful social agenda, the protest movement – Al-Hirak Al-Fahmawi – has been troubling the Israeli state.

Since mid-January, when the demonstrations kicked off, the Israeli authorities have intensively attempted to oppress the movement. Demonstrations were met with brutal oppression: assaulting old men and women who participated in the protests, injuring the city’s mayor, the vast use of rubber bullets, stun grenades and water cannons against peaceful demonstrators, illegal detention of protestors and applying pressure on organisers. Responding to police brutality, the organisers succeeded in nationally mobilising tens of thousands of protestors from south to north.

The local coalition of youth movements and social and political organisations is staking out a strong position against Israeli state authorities, holding them accountable for the crisis of violence. The movement is also emphasising the long-term sophisticated colonial Zionist policies against Palestinians. The historic and systematic land confiscation, causing a severe housing crisis, in addition to impoverishment, fragmentation, and marginalisation, among other colonial methods, formed the infrastructure of violence and unrest.

Protestors are also accusing the Israeli police forces of direct responsibility for the crisis. The movement’s official pamphlets distributed widely in the protests – titled “Police: The Origin of the Crisis” – explains how over-policing became a main method of oppression against Palestinians, especially after the October 2000 uprising, where Palestinians in Israel actively supported the Second Intifada. The movement sees the implanting of police stations in the heart of Palestinian towns as a central landmark in the colonial efforts for surveillance and control. This police presence is actively increasing friction with the community, rates of incarceration, and the killing of Palestinian citizen by police forces.

The movement’s position, which represents the views of the vast majority of Palestinians, suggests that the police forces play a central role in the rise of organised crime. The Israeli police – a historically hostile entity to the Palestinian community – has systematically refrained from solving murder cases or drying up the sources of illegal arms.

According to the Israeli newspaper Haaretz, only 22 per cent of the murder cases that took place in the Palestinian community during 2020 had been solved by November of that year, compared to 53 per cent of the cases that had taken place in the Israeli community. Meanwhile, the main source of weapons used in criminal activity within the Palestinian community is the Israeli army itself; according to the former Israeli minister of public security, Gilad Erdan, 90 per cent of the arms used in crimes that took place in northern districts were stolen from the army or sold by soldiers on the black market.

The significant role of this movement is its ability to reframe the struggle against crime and violence through solid and sophisticated political consciousness. For years, Israel tried to frame the crime crisis as a problem of “the violent culture of Arabs”, as it would be usually phrased by Israeli officials. The main achievement of the movement is reclaiming the colonised people’s discourse by identifying the responsibility of Israel’s colonial policies for this crisis.

This is not a mere political achievement, or another point scored against Israeli state propaganda, but rather, it goes much further. Understanding violence as a product of a colonial strategy to eliminate the native society is, in itself, a guide for possible paths of change.

First, the movement stresses that over-policing, surveillance, and use of brutal force against weakened communities will never be an effective tool to end the crisis. The exact opposite, it is seen as a recipe for surging friction between police forces and the community, with an increase in police violence and incarceration and criminalisation within the society.

More importantly, the understanding of social, economic, and political infrastructure of the violence crisis leads us to the conclusion that only through grassroots organisations, social welfare and solidarity, and rebuilding independent educational platforms, will it be possible to resist colonial strategies of fragmentation and impoverishment. By building the community from within, through closing the gaps within the community and building alternative social frameworks, the bases of crime can be confronted. Thus, the protest movement, itself, is an alternative social organ that opens space for people to imagine and build the future of their streets, towns, and homeland.

This is a hopeful call we hear from Um Al-Fahem, one that is bravely shouted in front of the barricades fortifying the Israeli police station. Confronting both organised crime and colonial state authorities, a bereaved community is healing through organising and protest.

Linkedin
RELATED ARTICLES
OTHER ARTICLES
The government’s brutal crackdown on NGOs has left victims of rape without anywhere to seek help. And now, as the country plays a key role is Russia’s war, things are only getting worse.
Students are being left to languish in unsafe housing, in some cases leading to serious health complications.
The author discusses her new memoir, which offers a sobering reflection on the racism and otherness she’s experienced along with a joyful celebration of her culinary heritage.
A new series of photos by Johny Pitts shines a light on communities and subcultures that have all too often been overlooked.
After rewriting the indie rulebook with her devastating songs about romantic longing, the singer-songwriter is now imagining a future in which the artist is no longer a product.
A series of photos by the late Jerry Dantzic taken in 1957 show a tender side to the iconic Jazz musician.