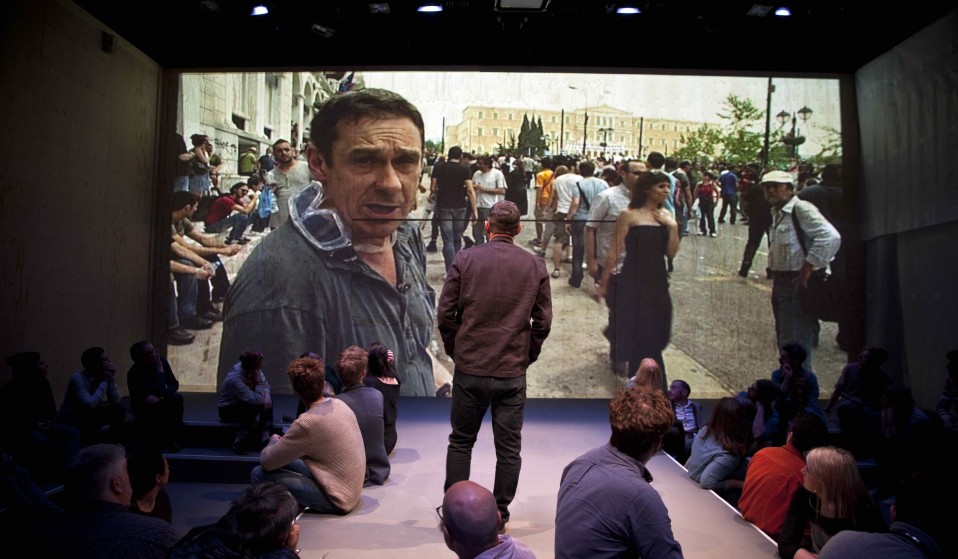 We talk to journalist and activist Paul Mason about where progressive and protest movements are headed in the Trump-Brexit era.

Following a short run of his new show at the Young Vic in London, we talk to journalist and activist Paul Mason about where progressive and protest movements are headed in the Trump-Brexit era.

It all starts in a rather claustrophobic room at the Young Vic Theatre. There isn’t much going on as far as the set goes: three white walls, which will act as an interactive canvas showing videos of protest and repression taken during the past six years, and a U-shaped seating area that blends into the stage. The audience gets pieces of paper with protest chants in Turkish and Arabic. There are four actors and a camera crew. On the floor, some DIY gas masks built out of plastic bottles.

Why It’s Kicking Off Everywhere, a new play directed by David Lan that ran for three days only, is the most recent incarnation of commentator and campaigner Paul Mason’s well-known book of the same name. It stems from a continuous, permanently unfinished reflection on what we’ve been experiencing globally since the beginning of the Arab Spring in 2011, and it poses a clear question: What the hell do we do now, in the age of Trump, Brexit and neo-fascism? The opening line aptly refers to watching a car crash.

“The current world situation is dangerous and threatening,” says Paul when I ask him about Brexit , the return of a love for borders and the far-right insurgence we are seeing today. “The global system as we have it is very complex, but also fragile – if you pick apart globalisation and deconstruct it now, it won’t just be the great depression, or a mild recession. Some places will look like Katrina just hit them. It will fall apart.”

As such, the setting of the play is global, and for good reason – technology, which played a key role in all these protests, from the Arab Spring to the Occupy movement, is borderless, and although the actors shift between accents pretty constantly, their characters are all motivated by the same familiar unifying energy: anger towards a system that no longer works. 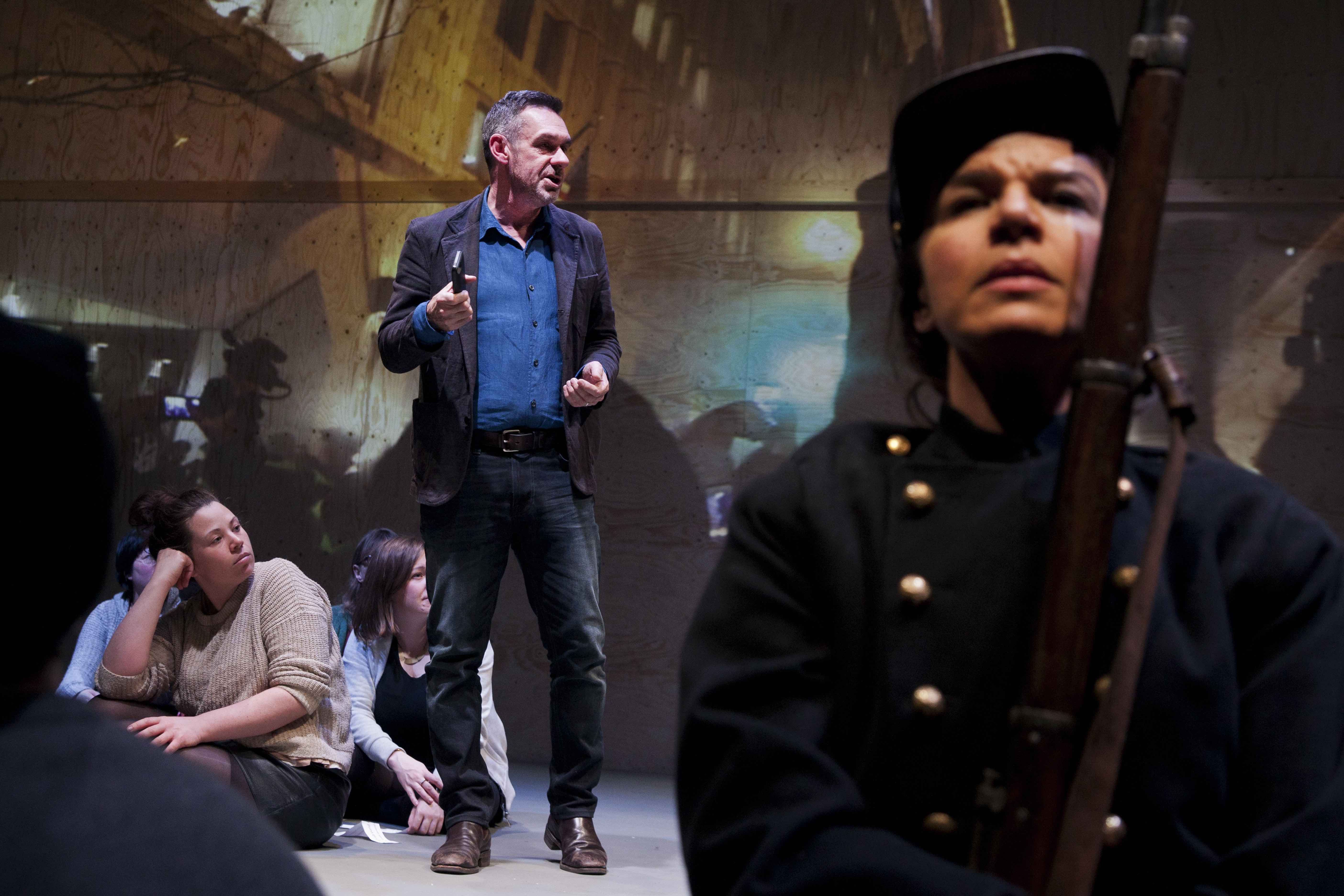 As the narrator, Paul is very didactic, trying to make all of the protests and action, most of which he experienced first hand, tie in together. The use of a live camera feed also helps remind the audience that he is, first and foremost, a journalist – an outsider offering one of many possible perspectives. “When you walk into a protest with goggles, a weird white bicycle helmet and a tag, people kind of accept that you are either there to tell their story or distort their story,” he explains.

“As a journalist, you are a person who is standing in the middle of the process, but you are not a direct part of [it]. This allows for a distance in perspective that the activists sometimes can’t have.”

But neither Paul nor his cast are entirely separate from the production: he, and his actors, are all activists too.

But this distance, as well as the immersive nature of the performance, makes sense in this specific context – the British public isn’t personally acquainted on the most part with extreme police violence and torture, least of all overthrowing governing dictators and entire political systems.

That’s where the chants come in. “I wanted people to ask themselves the question: Were I there, would I really want to chant? Do I want the fall of the regime? Would I put myself forward to be teargassed?” asks Paul. “A lot wouldn’t, and would rather stay safe. It’s about posing the question to people about what they would do in that situation – would they throw themselves towards uncertainty?”

One of the videos featured in the more current part of the play is of someone all in black (known as the black bloc) breaking a Starbucks window with a hammer during one of the protests the United States following Trump’s election.

Remembering the general outrage from mass media that followed that image (bigger than, say, the one afforded to airstrikes) I ask what forms of protest Paul believes are truly efficient in an age of symbols. “We shouldn’t fetishise certain forms of protest”, he replies, “the protest comes in response to the times we are experiencing.

“We need to focus on where we are right now. A big defence mechanism we are seeing in action at the moment is the legal system – the ACLU in America holding Trump accountable and standing up to the Muslim ban. At this exact moment, I’d rather see 500 human rights lawyers than thousands of Blac Blocks.”

The question still stands, though – where are we going now? The revolutionary movement all over the world is exhausted after so much violent repression and as the far-right gains more and more traction, it seems times get more hopeless by the minute. The 1% continue overpowering the 99%, who are increasingly having to turn to the internet and to the sharing economy for access to basic human needs such as healthcare. 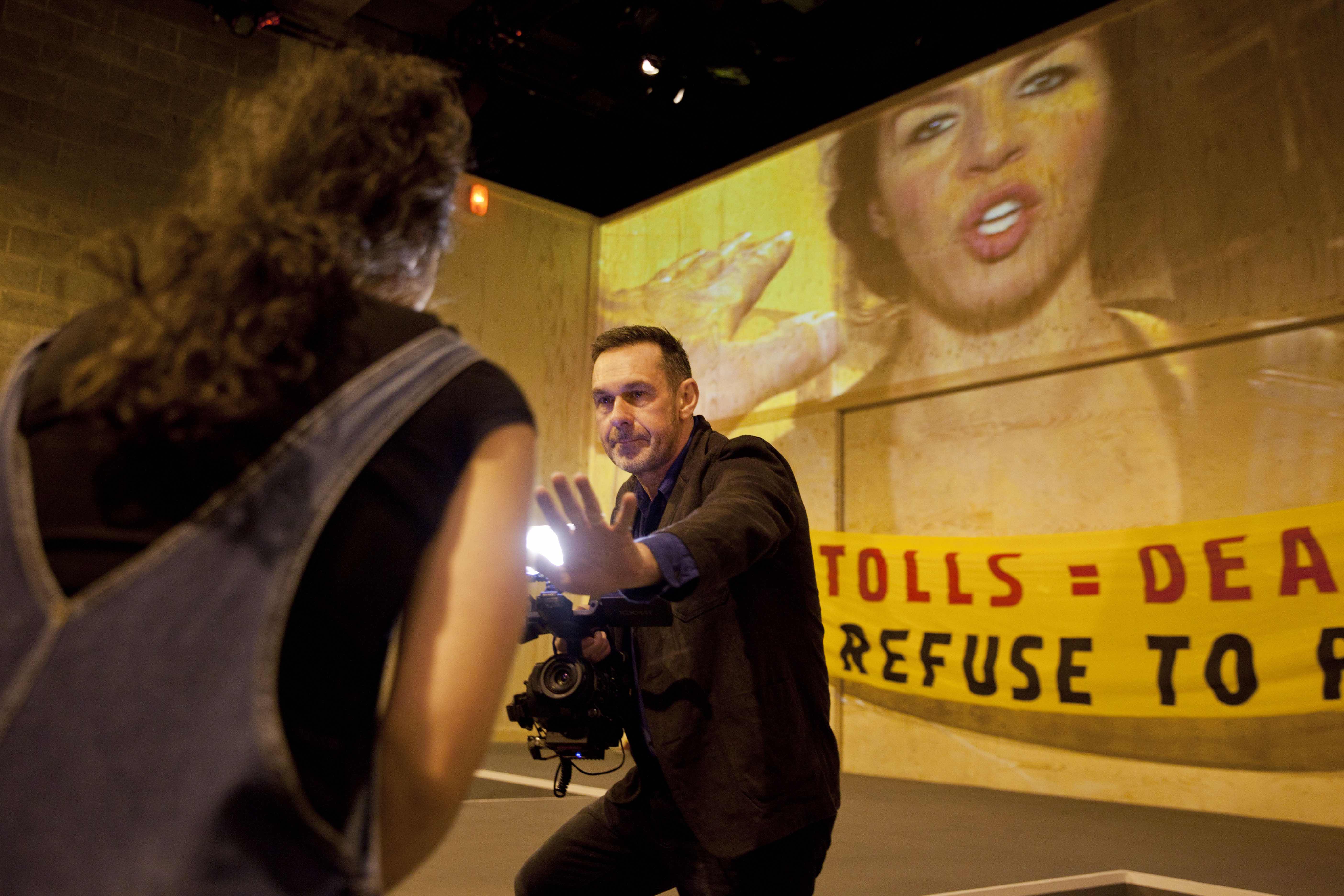 “I’m surrounded by people my age, who’ve been in the labour movement for the past 20 years,” Paul explains. “What we see is that the networked movements, as great as they are, are like a computer running without memory. They push forward, but right now, they need a hard drive. They need it so they can store the experiences from the protests that have happened. So they are able to rest when needed, but boot the movement up again in the future, allowing it to survive periods of inactivity. Exhaustion happens to people who keep running all of the time.”

Paul seems to believe all is not lost, mentioning the Women’s March as a shot of hope after the great depression of Trump’s election. As well as that, the character of Louise Michel, a revolutionary in the Paris Communes during the 1800s, serves as a reminder that even if the revolution didn’t happen this time around, we are one step closer than where we were before. Going slow, but steadily forward.

The play finishes with a group discussion, and while some people express discontent at the current state of the world, or even mention they’d forgotten half of the events that took place, others tell personal stories of the protests they themselves have been part of. A Greek woman raises her hand, and after apologising for her english, concludes: “What I want you to know is that the fight continues. Once you wake up, there is no going back to sleep.”

Linkedin
RELATED ARTICLES
OTHER ARTICLES
Photographer Ira Lapu documents the lives of ordinary Ukrainians living amid a brutal conflict.
With the singer’s tour in full swing, we sat down the musical production company who made the electrifying show possible.
Amid soaring inflation, more families are having to turn to the kindness of strangers to shoulder the cost of dying.
A new exhibition brings together 150 works by twelve photographers, offering mesmerising and intimate depictions of life.
Over the weekend, the United Families & Friends Campaign organised a protest calling for an end to deaths at the hands of the police.
Planet Ardbeg is a 40-page sci-fi anthology created by three cutting-edge artists.