Art & Culture / In Pictures: The people who live in storm drains underneath Las Vegas 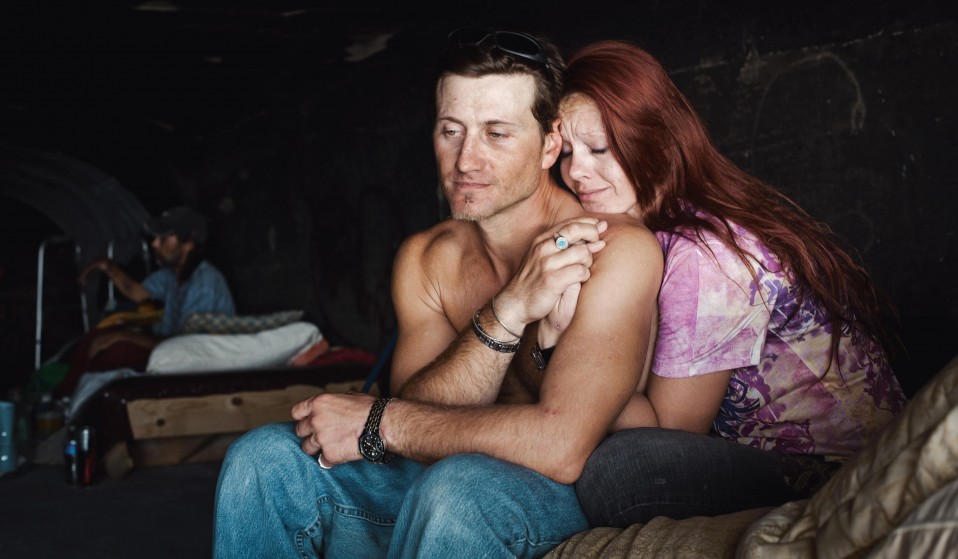 There is a world beneath Las Vegas, forged from tunnels and underground lairs, that speaks of America’s tattered dream.

There is a world beneath Las Vegas, forged from tunnels and underground lairs, that speaks of America’s tattered dream.

In 1971, self-styled Gonzo journalist Hunter S. Thompson set off for Las Vegas with his friend and ‘attorney’ Oscar Zeta Acosta. Notes from their trip would go on to form Thompson’s seminal work, Fear and Loathing in Las Vegas, a book that journeys to the deepest recesses of the American Dream.

It’s not hard to see why they chose Las Vegas; a glowing, neon oasis sprouting from the Mojave Desert, the city symbolises man’s determination to dominate nature and supplant it with a playground that caters to every vice. But while the bright lights twinkle with an all-American promise, the city houses a darker side. Currently ranked ninth in the Forbes list of most dangerous and violent cities in the US, Las Vegas also boasts the highest foreclosure rates in the country. A report by The Economist last year found that one in every ten homes was in a stage of foreclosure, almost five times the national rate. Add a high suicide rate to this grim reality, and Sin City starts to reveal its tarnished side.

“THE EDGE, there is no honest way to explain it because the only people who really know where it is are the ones who have gone over.”

These figures are not printed on flyers distributed on The Strip. In a city built on irresponsibility, the solution to trouble is to cover it up – or, in this case, push it underground. Beneath the city lies a 200-mile labyrinth of storm drainage tunnels built to facilitate sudden downpours. They vary in size and average about five feet in height. Over the past ten years more and more people have been calling these cavernous spaces home and today a community of over 300 people exists across the network. 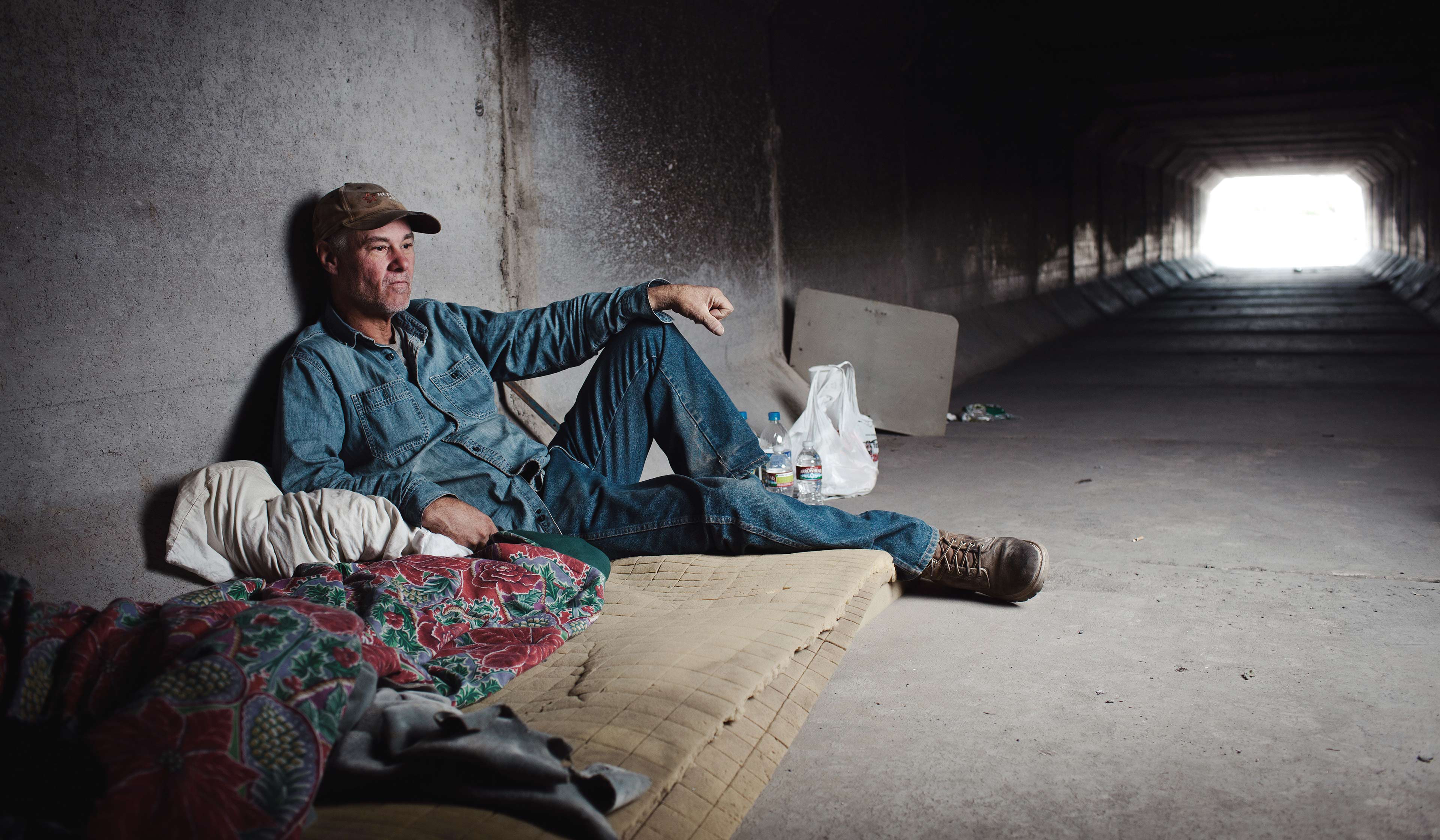 Eddy and Jody, both in their fifties, were up until recently part of this community. After nearly a decade underground, they now live in a single room in a pay-by-month Siegel Suites Motel. “When we first ended up on the streets, the city’s homeless quarter was too crazy,” explains Eddy, perched on the end of their bed. “People were up all night drinking and drugging, dead on the railway tracks. The tunnels are an underground safe haven. The cops will not go into the tunnels. But if you’re on the streets here they harass you constantly. They make up laws and they’ll take you to jail.”

Eddy came west from Buffalo in 1979 in search of work. When he met Jody, their addictive lifestyles soon took hold and they found themselves retreating underground, returning to the surface for essentials or to blow loose change. Life seemed to make sense down there. Petty theft from rival dwellers was an issue, but a pellet gun and rumours that the tunnels were haunted were usually enough to discourage intruders. For a long time this life seemed to suit them fine but then one day, as Eddy puts it, “we realised we were getting old, and we didn’t want to die down there. As soon as we got enough money we packed up and left.”

Most locals have no knowledge of the storm drains and seem shocked by the idea that people live down there. The Las Vegas Strip is quick to sell its gold-leafed dream and tarnished remnants are dealt with in an efficient manner: losers are strong-armed out the backdoor; down-and-outers pushed clean out of sight. And so the underworld has risen as a kind of refuge – a concrete maze that provides protection from both the people and elements up above. Trouble can arrive from only two directions, and with echoes of movement easily detected from a safe distance, the network is a formidable fort. Only the brave, or desperate, venture into the dark. 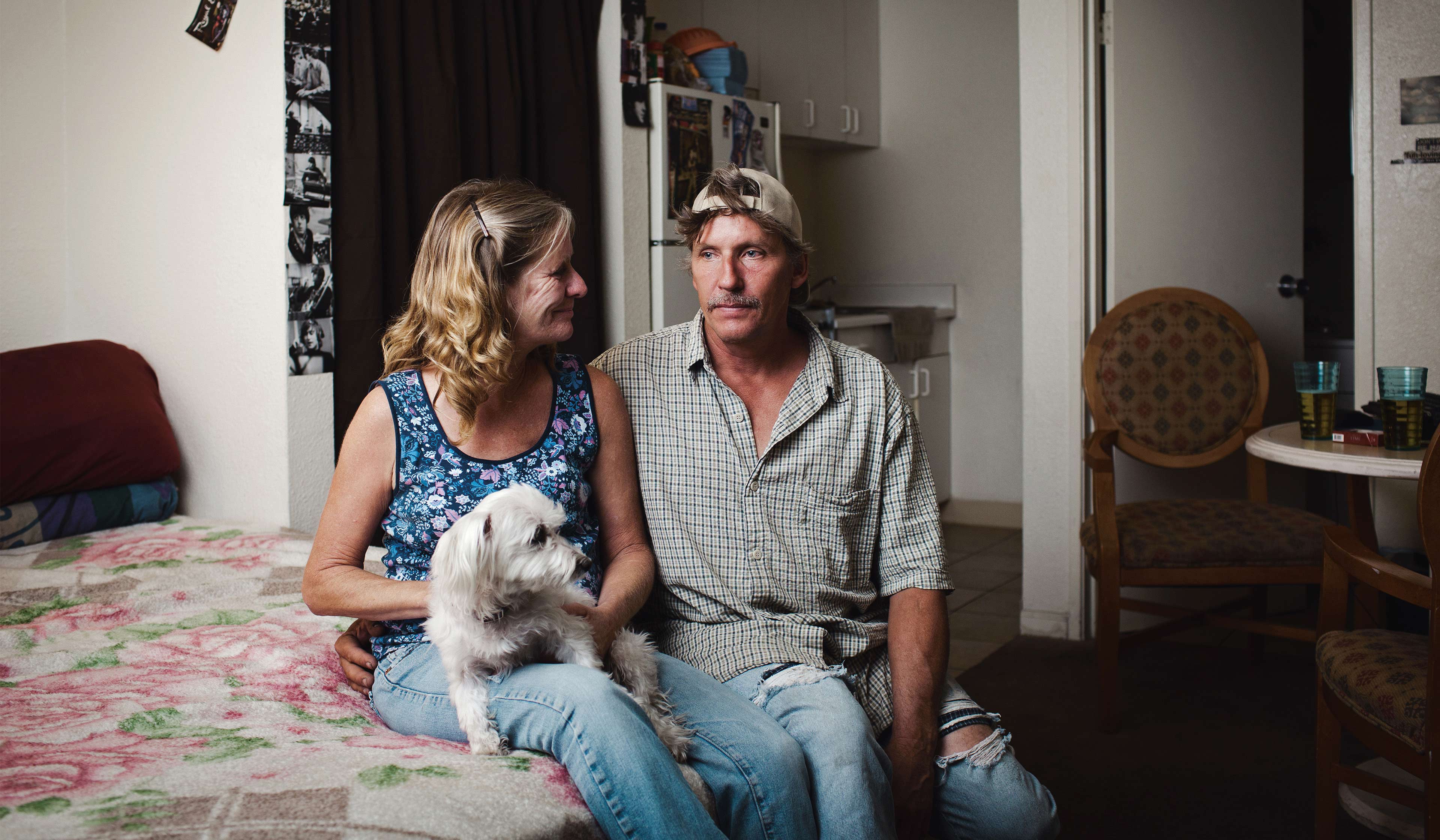 John, a relative newcomer to underground life, has made his home in a tunnel sandwiched between an exclusive golf course and private airport. It’s cool and dry, but the ceiling is covered in soot, grime and spiders’ webs. It’s a long way from John’s birthplace of Ipswich, England. He is fifty-six and has workers’ hands, but appears healthy and well dressed in denims and brown boots. “People don’t come down here,” he says sitting back on his mattress. “People are scared, you know, so they don’t mess with your stuff. Up there, in the real world, if somebody walks by – boom! – your sleeping bag’s gone.”

A bent metal pipe lies beside John’s bed, “just in case”, and the rest of his possessions are cast-offs from “the people up above”. He stacks his belongings on an old chair, and hoists them high above the floor using blankets as a sling. It’s a necessary measure for when the tunnels flood with rainwater; the very purpose of the tunnels casts an ever-present danger. Lives have been lost to flash floods, and belongings are frequently swept away. Even rain in the surrounding hills, while not felt in Vegas, can add to rapidly rising water levels. “I used to have foam and nice carpet, but that stuff all washed away,” John says solemnly.

Though it may seem at odds with ‘proper society’, there’s a certain familiarity to tunnel life. Ned and D, like many others, came to Vegas with high hopes. Now they work The Strip during daylight hours, passing out promotional flyers, then head back home to the tunnels after picking up supplies. It’s just their version of the nine-to-five. “It keeps a roof over our heads,” says Ned. “I’m not here because of anyone else’s fault, it’s my doings that have brought me to this point.” 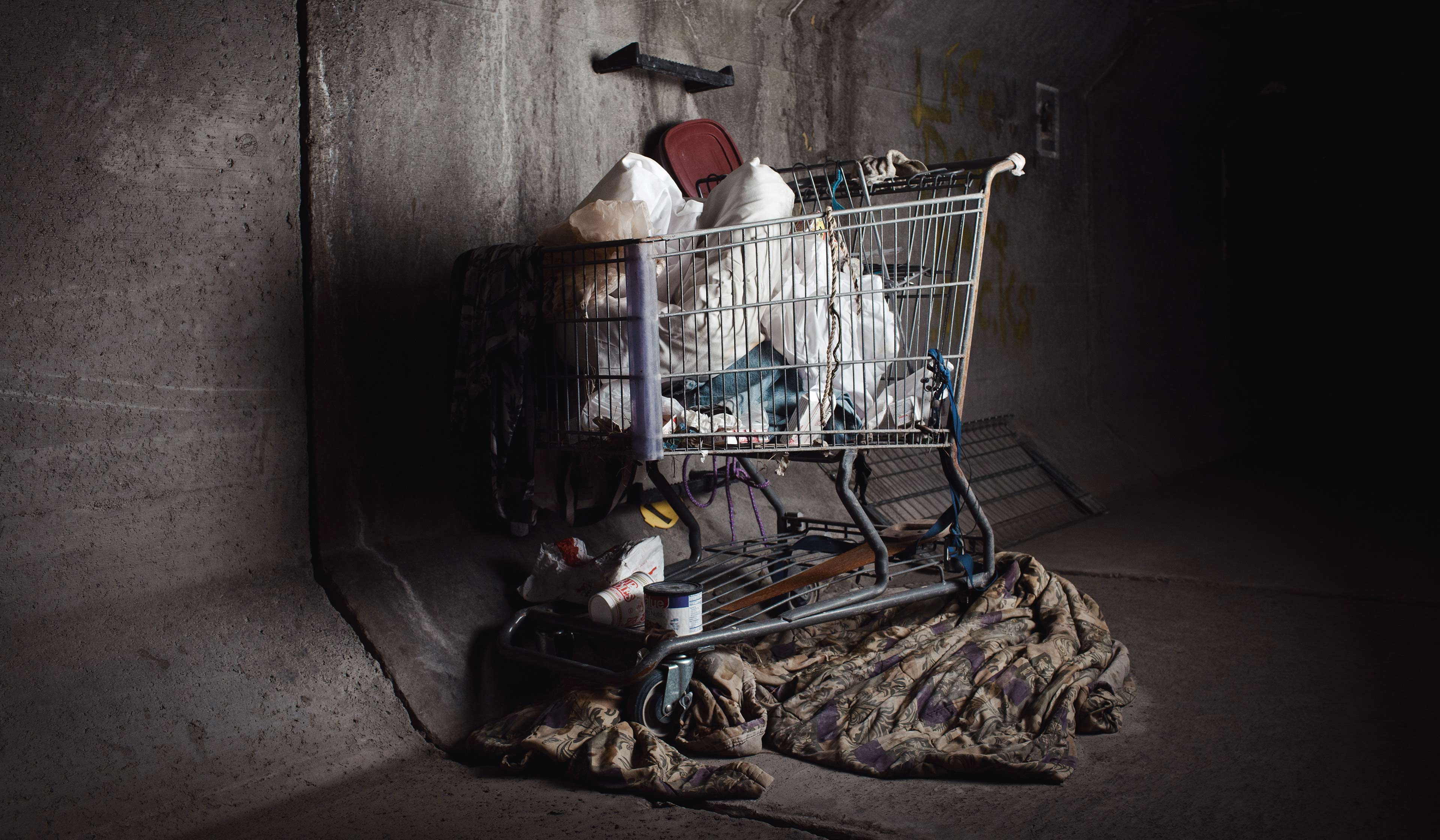 Ned and D have a small area where a mattress and personal items are kept. Ned refers to these spaces as “campsites”. A brush for removing dirt hugs the wall and their bed is a salvaged mattress with folded sheets that reflect an air of pride. Even here, community is key. “We chose here because we know people,” explains Ned. “These guys actually look out for us. When we were hungry they told us where the feeds are. Everyone here comes from a different walk of life, but we’re all here for a reason, obviously. We’re all learning how to bear, or cope, with where we’re at now.”

Rising back up into the heart of the city, sunlight stabs the eyes with a cruel indifference. The sooty residue of the tunnel walls has left its mark. One can’t help but wonder what Hunter would have made of this place, had he stumbled upon it, just yards from the main Strip. Across the street, the iconic ‘Welcome to Las Vegas’ sign dissects the horizon. A couple of newly weds pose for photos with Elvis. The American Dream sounds out like a siren, calling the desperate from far and wide.

This article originally appeared in Huck 35: The On The Road Issue. Grab a copy in the Huck Shop or subscribe to make sure you don’t miss another issue.

Linkedin
RELATED ARTICLES
OTHER ARTICLES
Photographer Sean Maung reflects on documenting a small town in Pennsylvania afflicted by high levels of unemployment, poverty, violence, crime, and addiction.
A new law change is enabling Britain’s donor-conceived children to know the truth about their origins – but campaigners say the fertility industry must do more to protect people.
A new podcast is opening up the conversation between trans women and trans amorous men in the hope of building coalitions.
Filmmaker Laura Poitras discusses her new documentary which traces the remarkable life of the artist-activist and the impact of her battle against the US opioid crisis.
AI companies that develop image-generators using copyrighted artwork from the internet are coming under fire from artists who say that it amounts to theft.
David 'Dee' Delgado’s photo project is about honouring and uplifting the city of his youth, and a world rapidly disappearing under the relentless onslaught of gentrification.