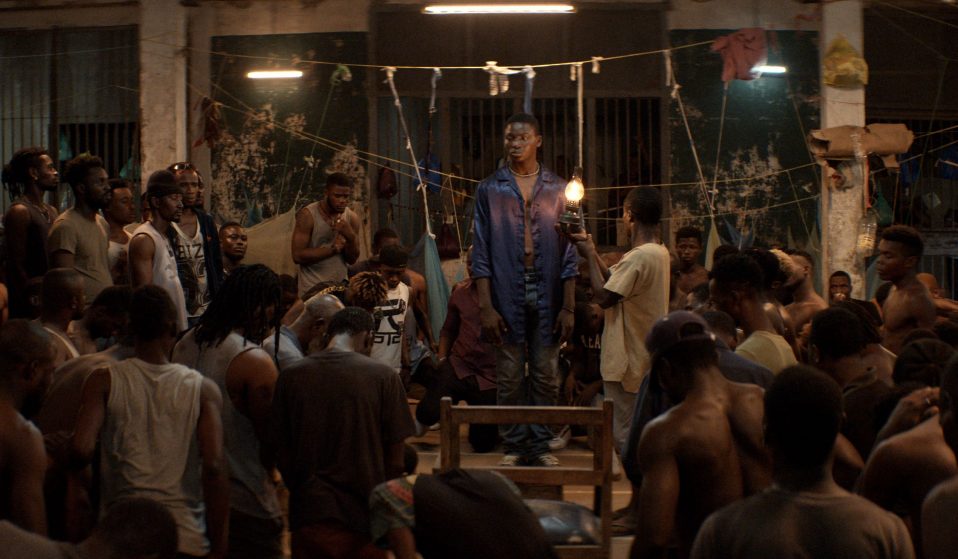 With his latest feature, the French-Ivorian filmmaker has crafted an empathetic blend of myth and reality, set inside a prison run by its inmates.

With his latest feature, the French-Ivorian filmmaker has crafted an empathetic blend of myth and reality, set inside a prison run by its inmates.

Myth and reality intersect in Night of the Kings, a film from French-Ivorian director Phillippe Lâcote that centres on a prison in the Ivory Coast run by its inmates.

Reviving the cadence of West African oral traditions for contemporary audiences, Lâcote brings us to witness the story of a griot (‘storyteller’) crowned Roman, who must appease the prison’s population through the night with a tale. He opts to recount the downfall of Zama King, a fabled gangster caught and lynched by a civilian mob in the town’s square. Blending magical realism with the architecture of folk storytelling, Night of the Kings is an account of dual oral histories, grounded in its appreciation of persons, politics and country.

Calling on his worldview as a former documentarist and reporter, Lâcote’s film is a foray into the dignities of hidden societies: an empathetic pursuit of wisdom that searches beyond the usual stories we tell of human beings cast away through incarceration. It follows on from his 2014 film Run, which looked at Ivory Coast’s decade-long civil war through the lens of a political assignation, and was nominated for Best French-Language Film at the Lumières Awards.

To mark the release of the Night of the Kings, Huck spoke to Lâcote, who called in from a marbled hotel lobby in the Ivory Coast.

Night of the Kings has received acclaim. What does that mean to you?

It’s important to show this theme in different major festivals because I am a sort of representative of my culture, of Ivory Coast. Ivory Coast – and especially African cinema – are underrepresented, so it’s important to bring our culture to participate. To be a part of this map of cinema – not outside. I wanted to reveal that in Africa we have old stories, traditional stories, modern stories and contemporary stories, which [can] be universal.

Many of the reviews position this film a ‘prison drama’ – but I don’t feel it sufficiently conveys all the elements you dealt with. What is this film about?

Simply, this is the story of a young man who goes to prison and hopes to survive. I wanted to show that prison is a complete society. That poetry and imagination comes from prisoners. That’s my political view. I don’t go to easy places within my cinema.

This is such a timely project when it comes to thinking about crime and punishment and how we choose to relate to those who have been incarcerated. Your portrait of prison life was so tender.

The situations – the conditions – are difficult in this film. I wanted to depict the reality of this prison as though there wasn’t a camera. I didn’t want to just make a very beautiful film or curate a beautiful shot, I wanted the audience to see how prisoners live. At the beginning we forget we are watching a film because we are in a prison – we see prisoners and we are with these prisoners. I’m careful not to position the camera.

Usually, when directors make films about prison, it’s to say, ‘These people are bad guys, they need more punishment.’ Or, ‘These people are good, they need less punishment.’ It was not my goal. My goal was to observe this society, with its code, its laws, and its beliefs. My role became about observing the succession – this fight about power, bodies, and desire – that was taking place inside the prison. I wanted to enter inside this society of prisoners.

I’m curious about your own relationship with prison.

Prison is a place that was very important for me, even if I was always a visitor. I made this film when a childhood friend told me about the practice of ‘Roman’ – of choosing a storyteller. It’s a real tradition in La Maca. They choose a storyteller, they call him Roman, and he is obliged to tell stories each night. I decided with this true story, to make Knight of the Kings.

When I was child – around 7 or 8 years old – my mother was kept inside La Maca for political reasons. So, I travelled one day [every] week in a collective taxi to go inside this forest because it’s this very open prison. So, as a visitor, you’d meet prisoners. A prisoner could take your bread, your newspaper, or even ask you for money. There were these kinds of interactions between me and some of the prisoners there. For me, it wasn’t a sad time – La Maca was like a kingdom with lackeys, Kings, Queens. I kept a very strong image during that time. I wanted to resuscitate this in Night of the Kings.

I read somewhere that you had a ‘six-month internship’ with a gang to prepare prior to filming. How important was authenticity for you?

Yes, there are a lot of stories around this film [laughs], but I did undergo training in a gang. In the end, I didn’t shoot with this particular gang, I shot with other extras, but it was very useful for me because I was there inside. I followed a gang leader who sold drugs for some months. There were lots of people who came to him for drugs and from there, I would observe all of those relationships he had. It gave me an opportunity to observe how power was organised around one person. It was useful, even if it didn’t directly lead to the film.

You were very hands-on.

I was, that’s my way of working. You see, at the beginning of my career, I started with fiction – but I became a documentarist after. I worked for 10 years as a documentarist and as a reporter. But this is the way I choose to work – to go very deep inside a condition. All those drawings you see on the wall of the prison within the film are real drawings, coming from real prisons. All the words you see painted are real words. I didn’t want to make something nice or to make it decorative because in a prison, when you write on the walls, that means something for people. It often comes following a time of great suffering when prisoners will choose to write something.

For Night of the Kings, I worked with lots of elements of prison. There were a lot of documents I went through – press documents, prison documents and documentaries themselves – to find some images of bodies. I feel that it’s very important today for us to have a sort of rehabilitation of the Black body because Black bodies are known for a few things in popular society – dancing, sex, or slavery. Those are the three clichés. But I wanted to say Black bodies are human bodies. Simple. We have simple bodies, there is no connotation.

I won’t say that I wasn’t concerned by the West because I take money from the West. But I will say it isn’t important for me to make a film with a European view, or with a Western view. It’s not useful. It’s important to make our films with our view. When you speak about magical realism and all of those things, that’s also our culture. The border between magical things and realistic things is very fun, and as Africans we cross it very easily. To refer to Sembène again, he once said: ‘We must tell Africa. If we don’t tell Africa, it will disappear.’ I think that’s important.

In media, it can often feel like we accept one story about the potential of Black people, which is based on trauma. As a filmmaker, how urgent is it to tell other stories?

There is one message in the Western world of Africa – and of Black people. It’s either trauma, humour, or exoticism. In France, it’s evident that you must bring something either funny or very sad. You’ll sometimes hear, ‘It’s not enough Africa.’ But it’s not our goal to wait for people to be ready, or for them to say, ‘Okay, now you can bring your real story.’ As directors, we must be very courageous. We must come with our realities as contemporary Africans because Africa today is very difficult to understand – it’s a mix, it’s alive, and it comes with lots of pieces.

It’s not easy in our industry because they need a still image of Africa. They want a sleeping village, they want to see animals grazing for everything to be quiet. When you want to understand another culture, sometimes you have the temptation to organise it, which is understandable. But we, as directors, need to push the door. We need to bring our realities – and our complexities.

Interview has been edited for clarity.

Night of the Kings is available in cinemas and on digital now. For more information visit Altitude Film.

Linkedin
RELATED ARTICLES
OTHER ARTICLES
From the Yakuza to a biker gang, Bruce Gilden recounts capturing Tokyo and Osaka in the ‘90s.
Our new magazine is here, starring the inimitable Mitski. Order your copy now and join us on a trip around the world.
To mark the anniversary of the mass trespass of Kinder Scout, a group of hikers came together with the intent of creating a new, fully inclusive culture for rural spaces.
A new documentary explores the government’s efforts to quash the protest movements of the late ‘60s by any means necessary.
The author discusses her blistering new novel about history, revolution and queer love.
In the last of our dispatches from OFFF Barcelona, Rufus Deuchler and Vincent Gault discuss the future of creative process.