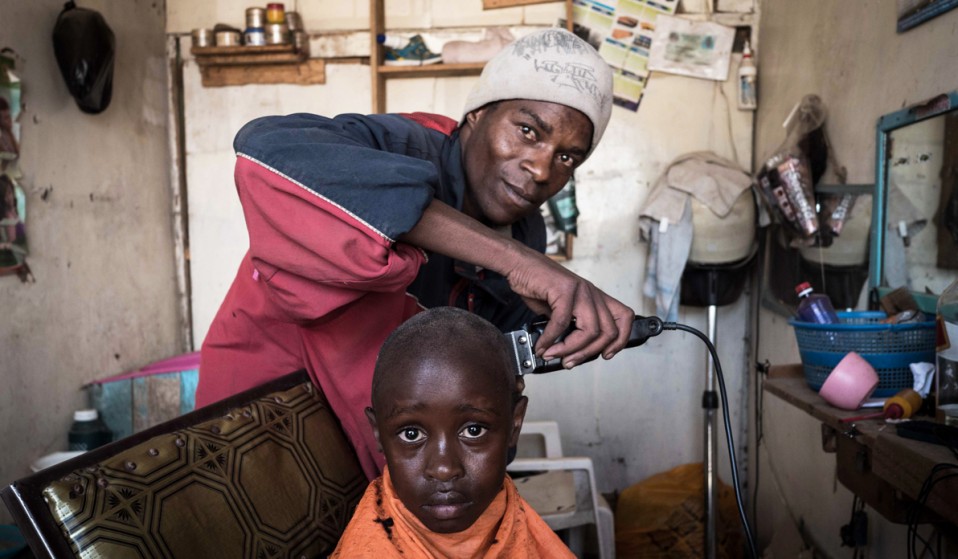 When Roland Brockmann first took up photography, back in the era of punk and new wave, he’d take black-and-white portraits inspired by Diane Arbus and process them in his own small lab.

It felt like he was onto something… except for one small problem.

“I was too shy to approach strangers,” the 57-year-old say now. “So that was a bad fit. But, to be honest, in those days I was probably more interested in living the life of a ‘photographer’ than serious taking pictures.” 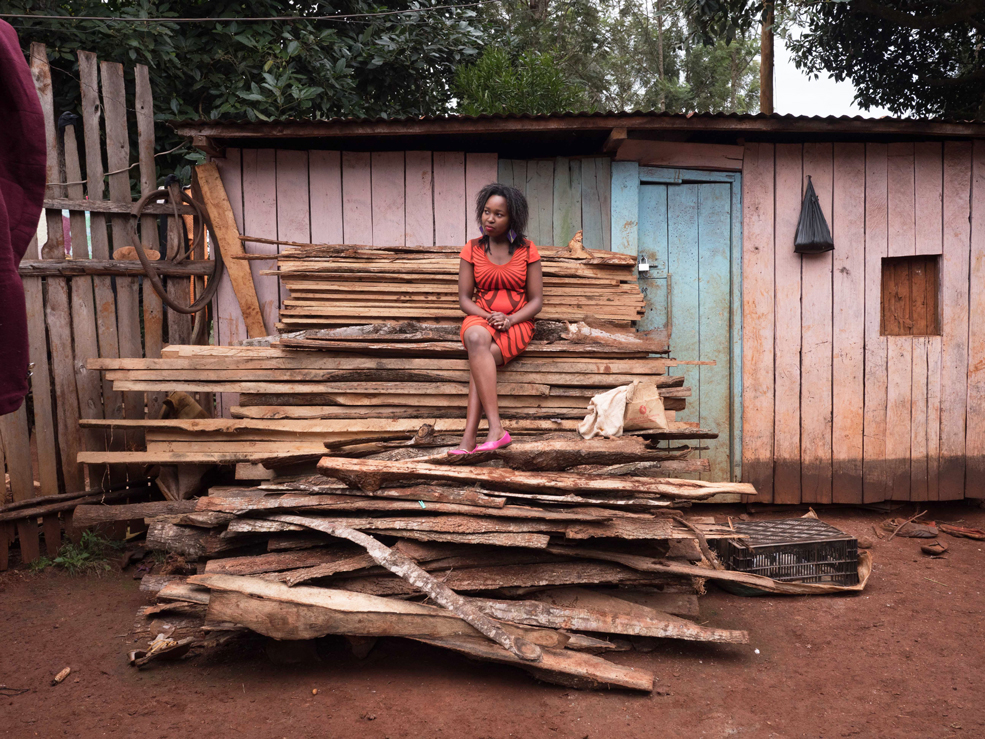 Roselyn Wanguthi Murithi, 19, student.
“I’ve been studying educational sciences in Thika near Nairobi for a year… We Shamba girls (from the countryside) also know a thing or two about fashion – it’s not just the city girls. I like short skirts, tight jeans and boots. Dressing sexily doesn’t need to look cheap. That’s what I think. And I only do it for myself. People in the country are conservative, but my parents are quite tolerant. What do I care what the neighbours think? You can be sure you won’t meet anyone wearing the same thing.” 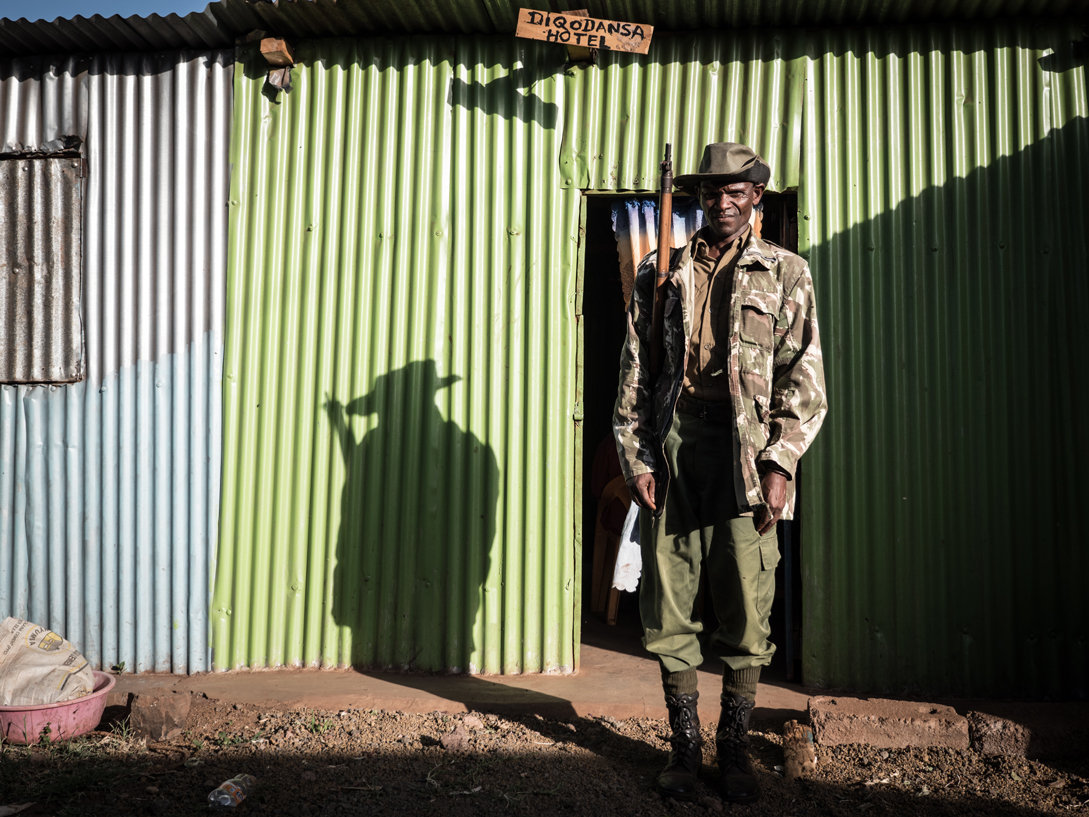 Dabasso Abdula, 53, police volunteer.
“All the members of the National Police Reserve are volunteers. We support the normal police, but only in the countryside – always in the places where we live. I’m actually a herder, chosen by the village community… I’m not proud to be in the National Police Reserve. The job is not without risk, because the cattle rustlers are also armed. Some only have spears, others have rifles like us. The tribal fights often result in deaths. I myself have also shot, but I’ve never hit anyone. It’s not that easy, especially when you’re chasing people off-road at night.”

Instead Roland studied sociology and left Hamburg for Berlin to pursue journalism in the 1990s. He soon had the chance to travel with photographers around the world, researching and reporting on Congo’s gold mines, pirates in Brazil or contortionists in Mongolia.

“That was a good education,” says Roland, “because aside from doing my own work, I watched my colleagues taking pictures – always a little jealous that I was just the writer.”

Over time, as publications cut their budgets, Roland got the chance to take photos of his own – often on assignment from NGOs, documenting issues like the distribution of mosquito nets in Liberia. He found himself taking “the usual charity photos” along the way, but something didn’t feel right. 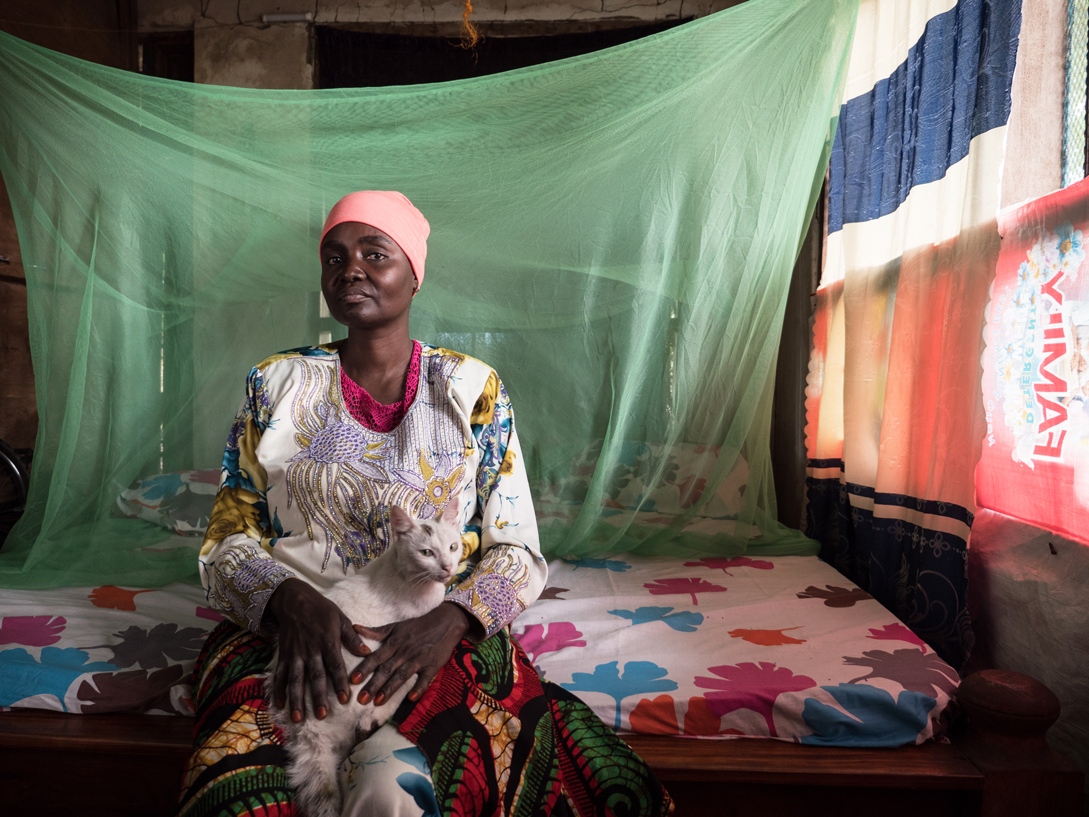 Halima Ramadhan, 45, cleaning woman.
“Whitey [the cat] was still very small when my friend brought her over. I brought her up on porridge. She trusts us because of that. When we call her, she comes. My children are always playing with her and at night Whitey sleeps with them in their bed. Pets aren’t common here. People only keep animals to use them, like dairy cows or watchdogs, even though dogs are considered haram. Children throw stones at them and the kids in the neighbourhood also pester Whitey. My children are different. When Whitey gets hurt fighting stray cats, they take care of her wounds.” 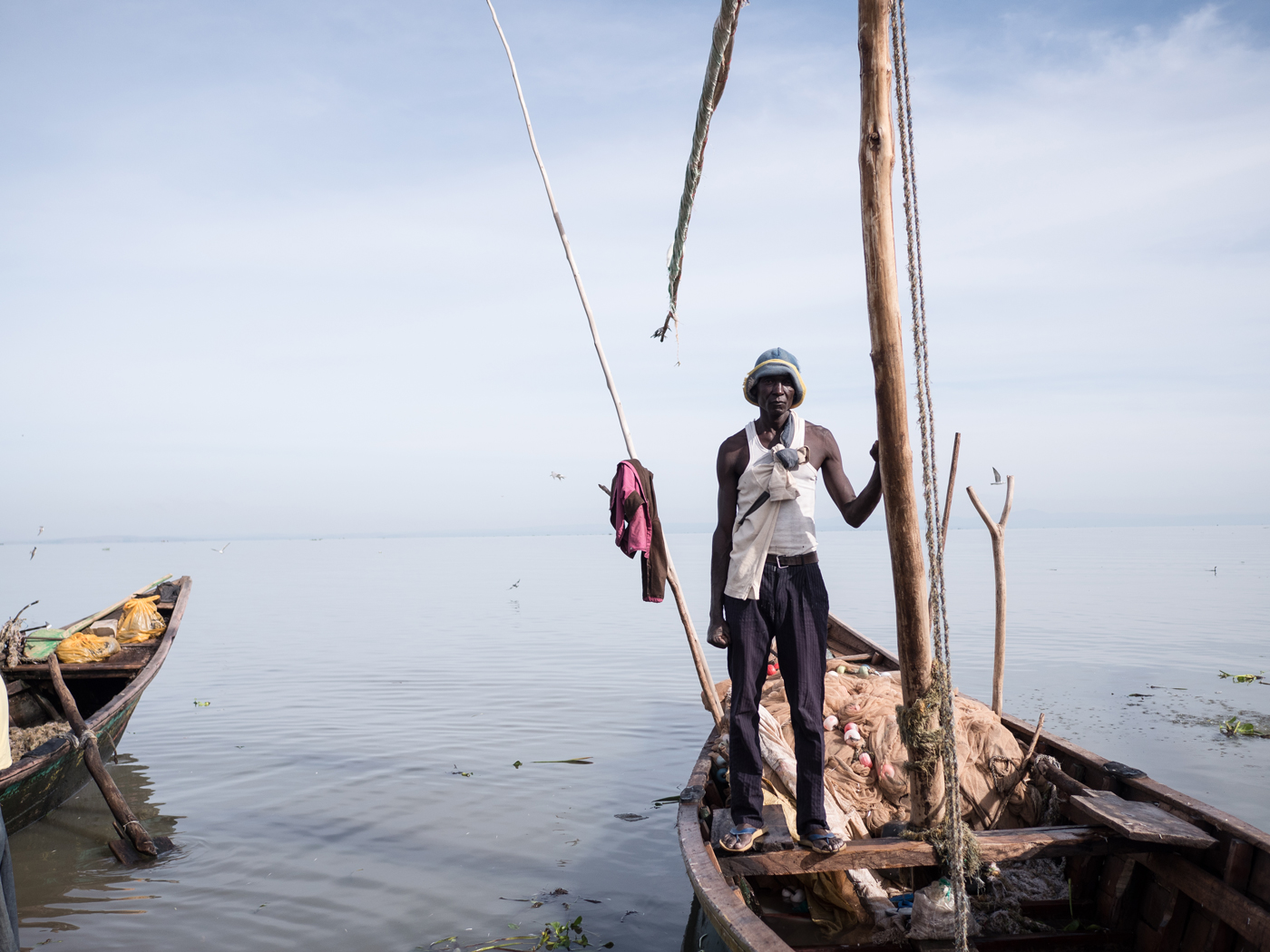 Octaph Otieno Osano, 41, fisherman.
“On the lake everything, depends on the moon. If it’s in the east, the fish come from the west because they swim with the waves. So we’ll cast our nets to the east of the boat. But only the captain really knows about the weather and where the fish are. Without an experienced captain, you don’t catch anything… I’ve been making a living like this since I was 17. Fortunately, I also own a piece of land with four cows and two goats. But I also have two wives and eight children.”

There was a world of colour and personality in front of him: quiet vignettes that were all dignity and no drama.

“But that was not what the NGOs wanted, of course,” says Roland. “In order to earn money, I had to capture the misery of the world. Most of the time this brought me to refugee camps in Southern Sudan or drought areas of the Sahel region…

“Personally, I always knew that Africa is much more than what the typically European view of misery and exoticism implies.”

Having spent some time living in Kenya and Tanzania, Roland felt the pull of an idea: to give ordinary Africans a face and let them tell their story in their own voice. 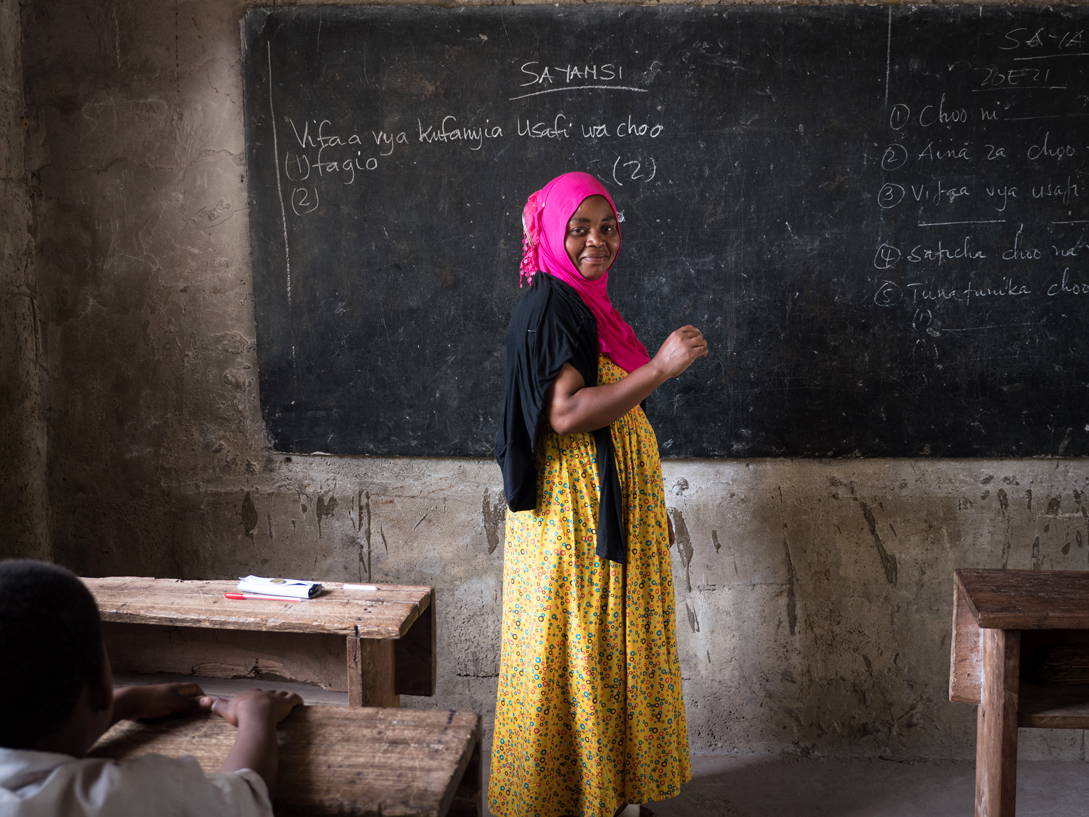 Hirack Makando, 32, primary school teacher.
“Chongoleani is a small fishing village by the sea, with 700 inhabitants… I live in Tanga, the district capital, with my family. To get to work every day, I first have to take the bus and then a motorcycle taxi for the last part of the journey where there aren’t any buses. I have to pay my travel costs myself. It doesn’t leave me with much of my salary. But we didn’t want to move. I would rather save for my own moped. I always wanted to be a teacher and to contribute to the development of society.” 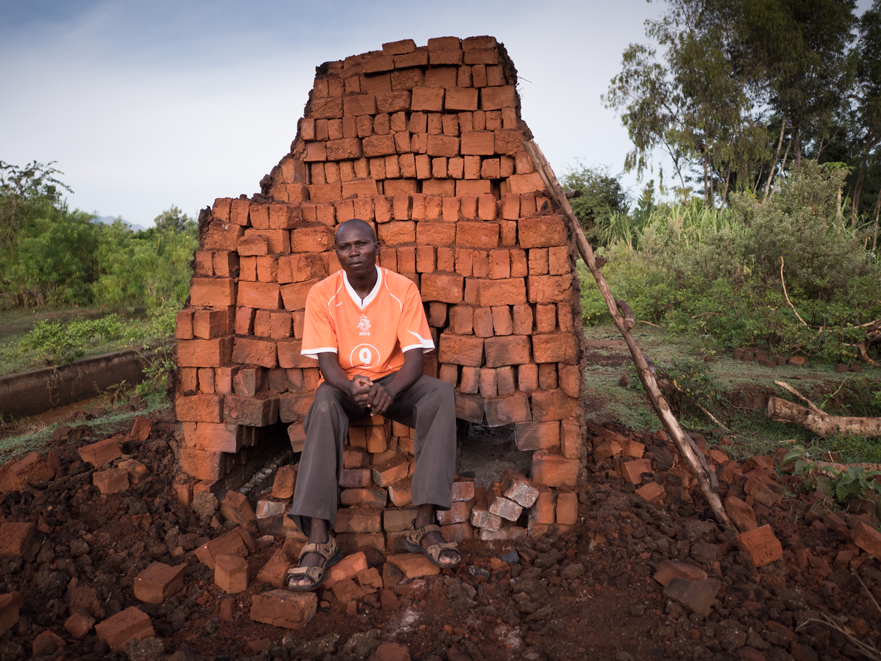 Kennedy Otieno Okuk, 35, brick burner.
“After primary school, I first became a fisherman. Later, my brother took me to Eldoret. He‘s got a tailor‘s shop there. In the city I met someone who was burning bricks. I‘d never seen anything like it. He had a lot of business and was a respected man. I was impressed by that, so I studied his technique and went back to my village, where nobody knew anything about bricks. There is enough clay on my piece of land, so it doesn’t cost me anything. The only thing I have to buy is the firewood… Burning bricks has changed my life. Without it, I would be like everyone else.”

At first, the photographer explains, he didn’t know what to expect. “Would people have anything to say at all? And would they tell me, a stranger?”

But as Roland and a friend began travelling through the Kenyan Highlands, backpacking their way across rolling green hills in minibuses (Matatu) or on foot, he found that being the only Mzungu (white man) around meant that characters came straight to him – armed with stories of success and failure, love and separation, worries and passions.

“It was a wonderful experience: not having to search for something, but instead meeting the present,” he says now. “By getting involved with the others, I was able to let go of myself.” 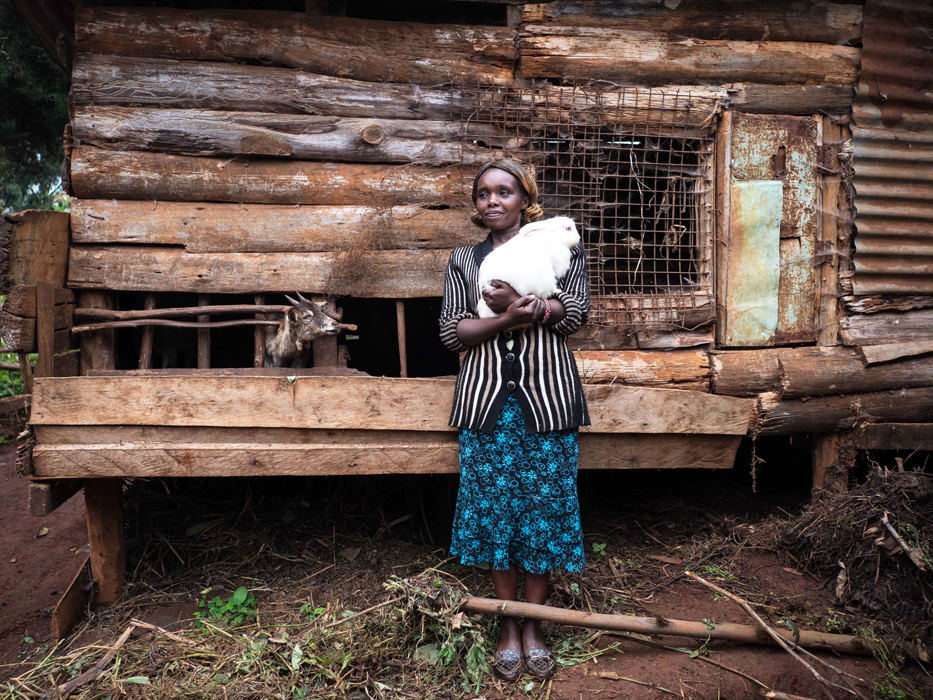 Florence Wanja, 35, tea farmer and hairdresser.
“One day [my husband] hit me in front of strangers. That’s when I decided I should go back to my parents and look for a different future. It’s a hard step to take among us Kikuyu. Going back to your parents is frowned on if the husband has paid the bride wealth and you already have your own household… We haven’t seen each other since the separation. I think about it, but I don’t want him to know that. He says he’s going to stop drinking. I don’t really believe it, but all the same I hope we’ll have a future together.” 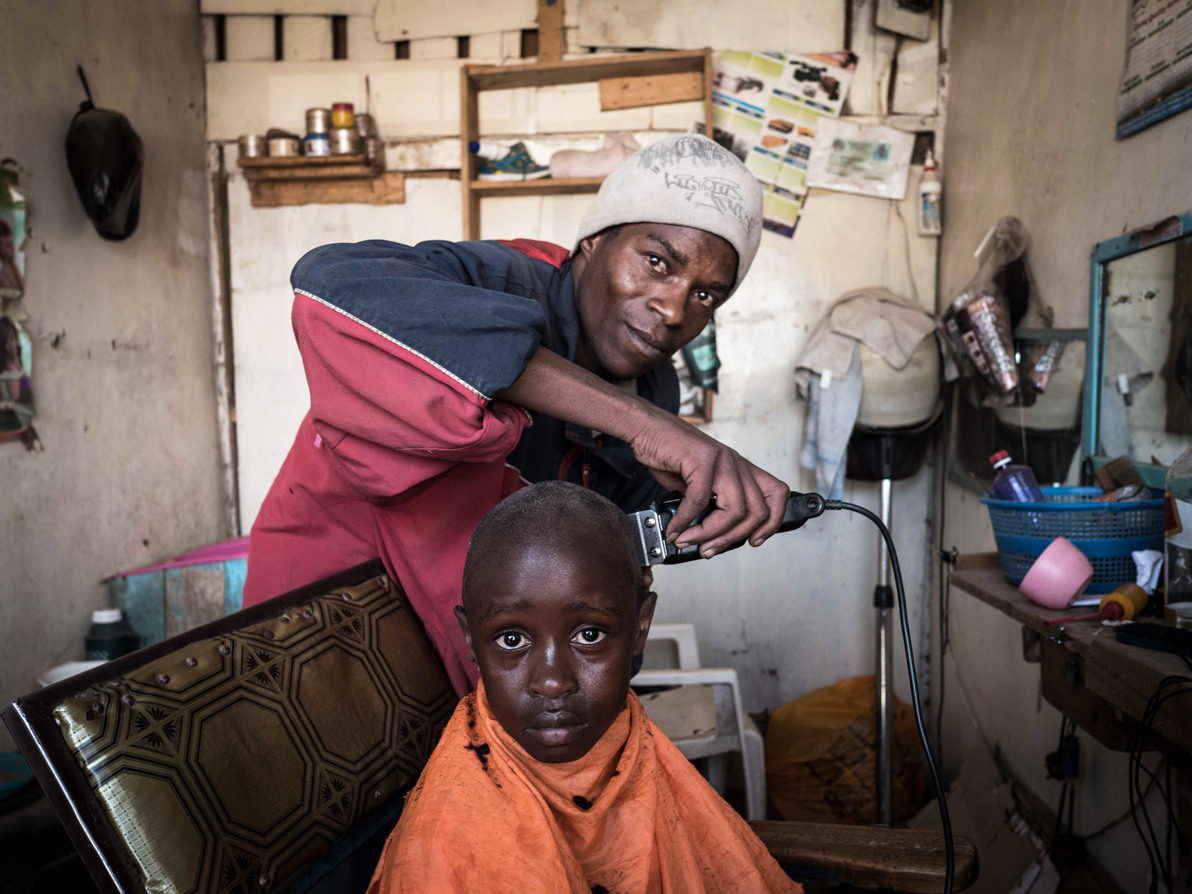 Alex ‘Ras’ Muthoni, 26, barber.
“Most people just call me Ras because I’m a Rastafari. And there aren’t that many of us in Naro Moru. Maybe 20. This is a small town. The other people here respect us. They know Rastafari don’t cause trouble. And our philosophy is all about peace and harmony… There’s a lot of competition among the barber shops in Naro Moru, but I don’t really try to attract new customers – they come to me thanks to Jah. But people also appreciate my service. My brother trained me well. I dropped out of school early. I grew up with my grandparents who didn’t have much money. And when you’re from the slum, no one wants to hire you. Now I have my own business as a barber. I want to introduce myself to my girlfriend’s parents soon. That’s when things will get serious.”

With the help of a translator, and some tea-making supplies for home visits, Roland spent time with everyone from a banana beer brewer to a bone carver, an octopus catcher to a coffin maker.

Picking a favourite story would be impossible, he says, but the overall experienced confirmed his instinct.

“Africa is neither a dark continent nor a exotic paradise under palm trees,” he says. “I hope my book gives a true picture of a normality that the West isn’t even aware of. At the same time, the book intends to emphasise the individuality of people by focusing on them and not on the continent.” 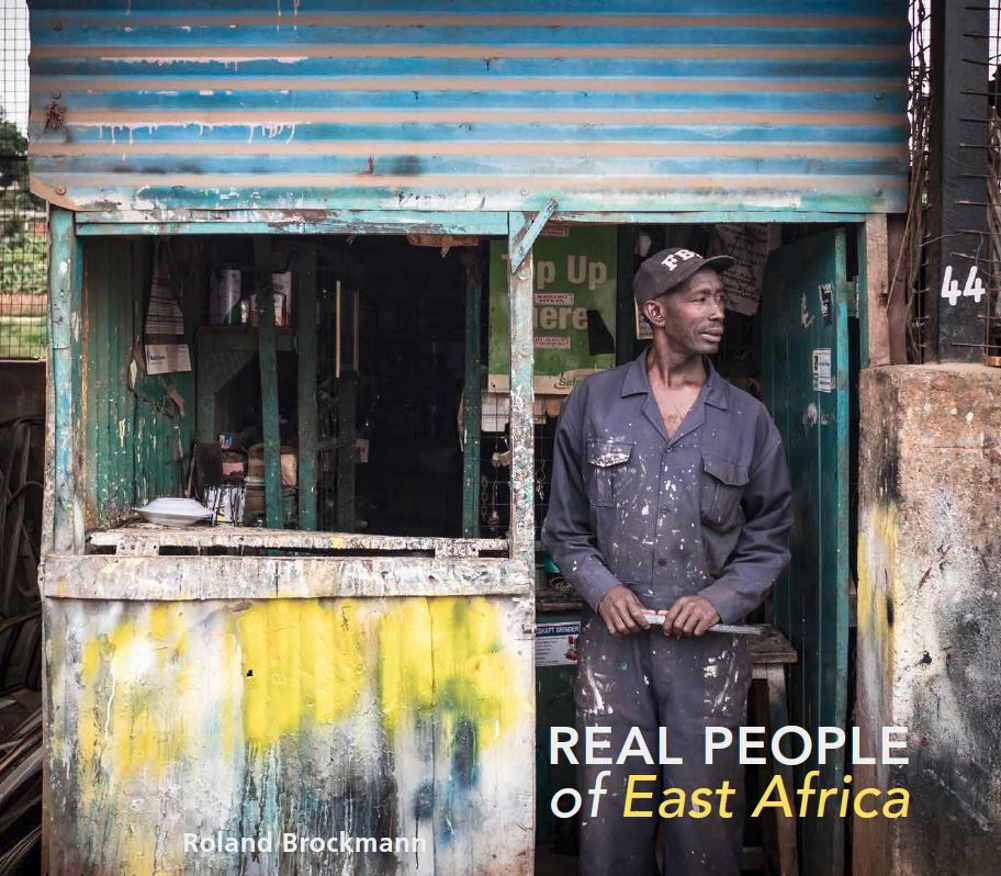 Check out Real People of East Africa by Roland Brockmann.

Linkedin
RELATED ARTICLES
OTHER ARTICLES
While protests over abortion rights rage in the US, access to abortion services is still almost nonexistent in parts of the UK.
For decades, Wilmslow Road has been a bustling area full of curry houses. But how did it come to be what it is today?
In our first OFFF Dispatch piece, the Arce Studio founder shares her tips on standing out from the crowd.
A new documentary explores the government’s efforts to quash the protest movements of the late ‘60s by any means necessary.
From the Yakuza to a biker gang, Bruce Gilden recounts capturing Tokyo and Osaka in the ‘90s.
As Lisa McGee’s sitcom approaches its final episode, writer Seaneen Molloy reflects on how the show sought to give an honest portrayal of teenagehood during the Troubles.