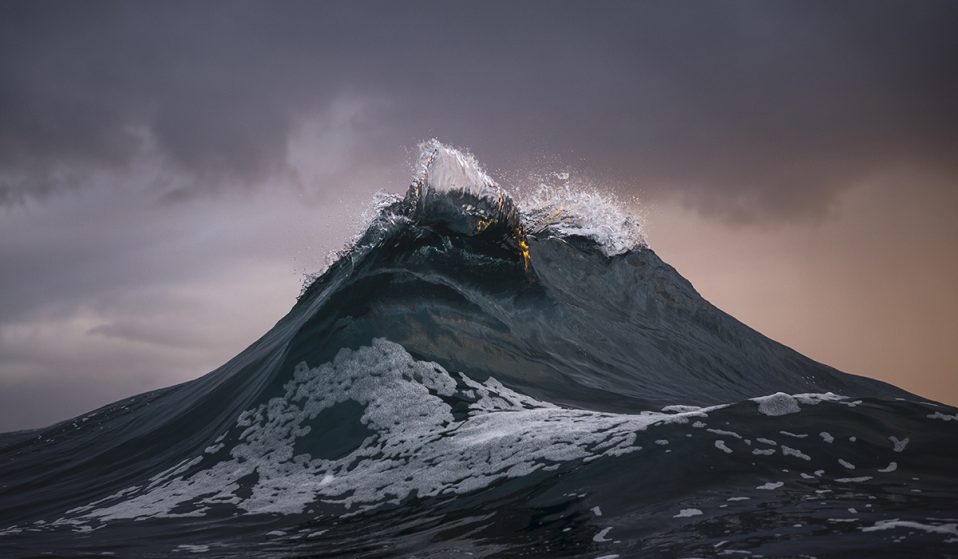 The Australian has become one of the most influential nature photographers of the 21st century, capturing the formidable power – and increasing vulnerability – of our oceans.

The Australian has become one of the most influential nature photographers of the 21st century, capturing the formidable power – and increasing vulnerability – of our oceans.

Ray Collins wasn’t always an ocean photographer. He used to work in the mountains of the Illawarra, mining for coal. But one day in 2007, a misstep changed his life for good. “My foot got caught in a hole,” he remembers. “I buckled and heard this crack and a tearing, popping noise. I was alone underground by myself, vulnerable and in a lot of pain.”

We’re walking along a sandy beach in the coastal town of Bulli in New South Wales, about 90 minutes south of Sydney. Collins grew up here, back in the ’80s when the perfect surf wasn’t crowded, and the decadent beach houses were snake-filled grasslands.

Collins has the disposition of someone who’s spent most of their life in or near the ocean. He has an open, content face – the face of someone who gets their kicks from the outdoors rather than excess – and a warm demeanour. He has a curved scar on his forehead, like a wave about to break, and tucked under a tattooed arm is a tiny Boston Terrier panting in the heat. Her name’s Schmitty.

“I was way, way, way down in the tunnel,” he continues. “Pitch black. There was a kilometre of earth above me. I was just flattened on my back with my respirator, my helmet and my cap lamp. But after a couple of hours I got picked up, taken away in an ambulance, and that’s when I was forced out of my routine.” 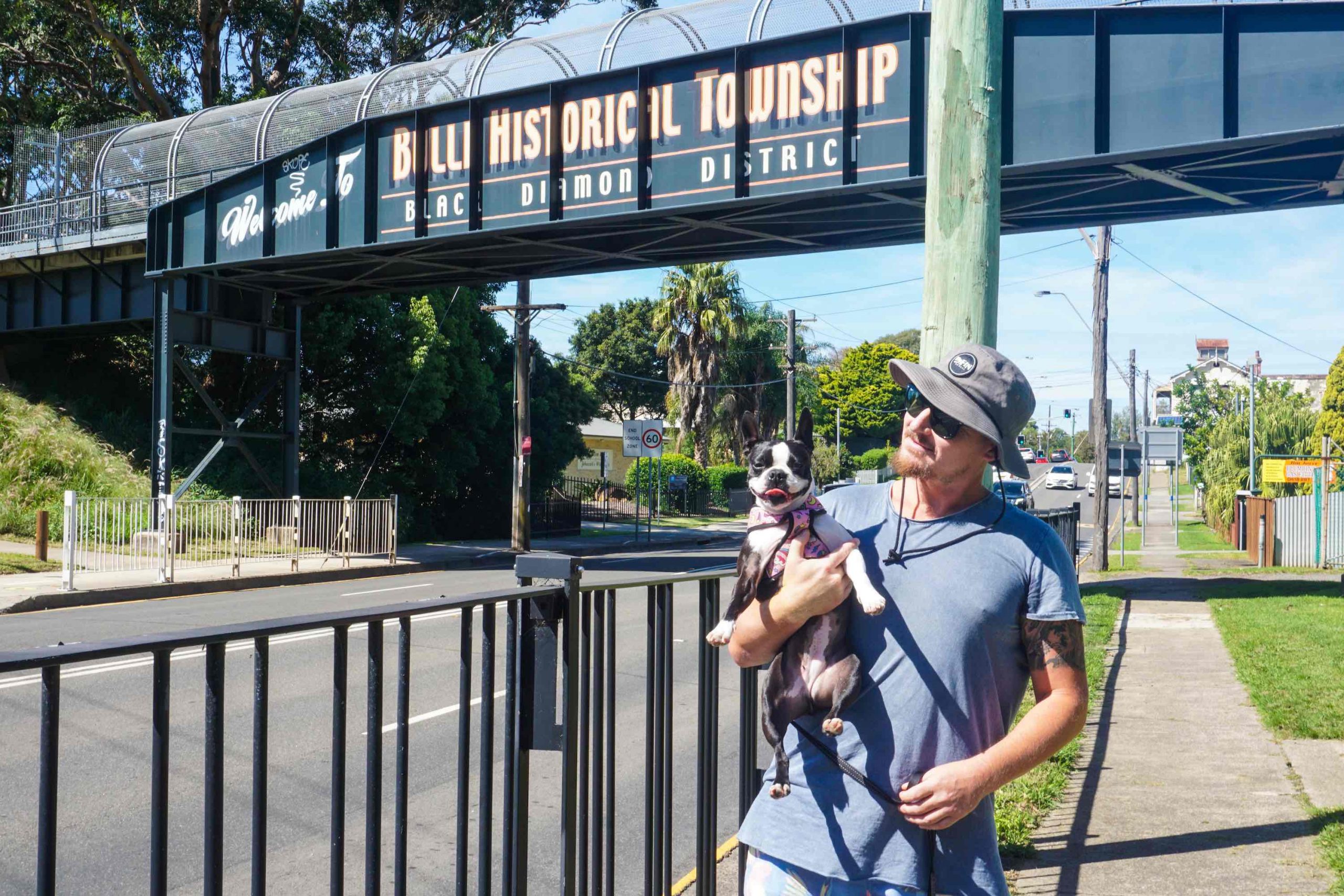 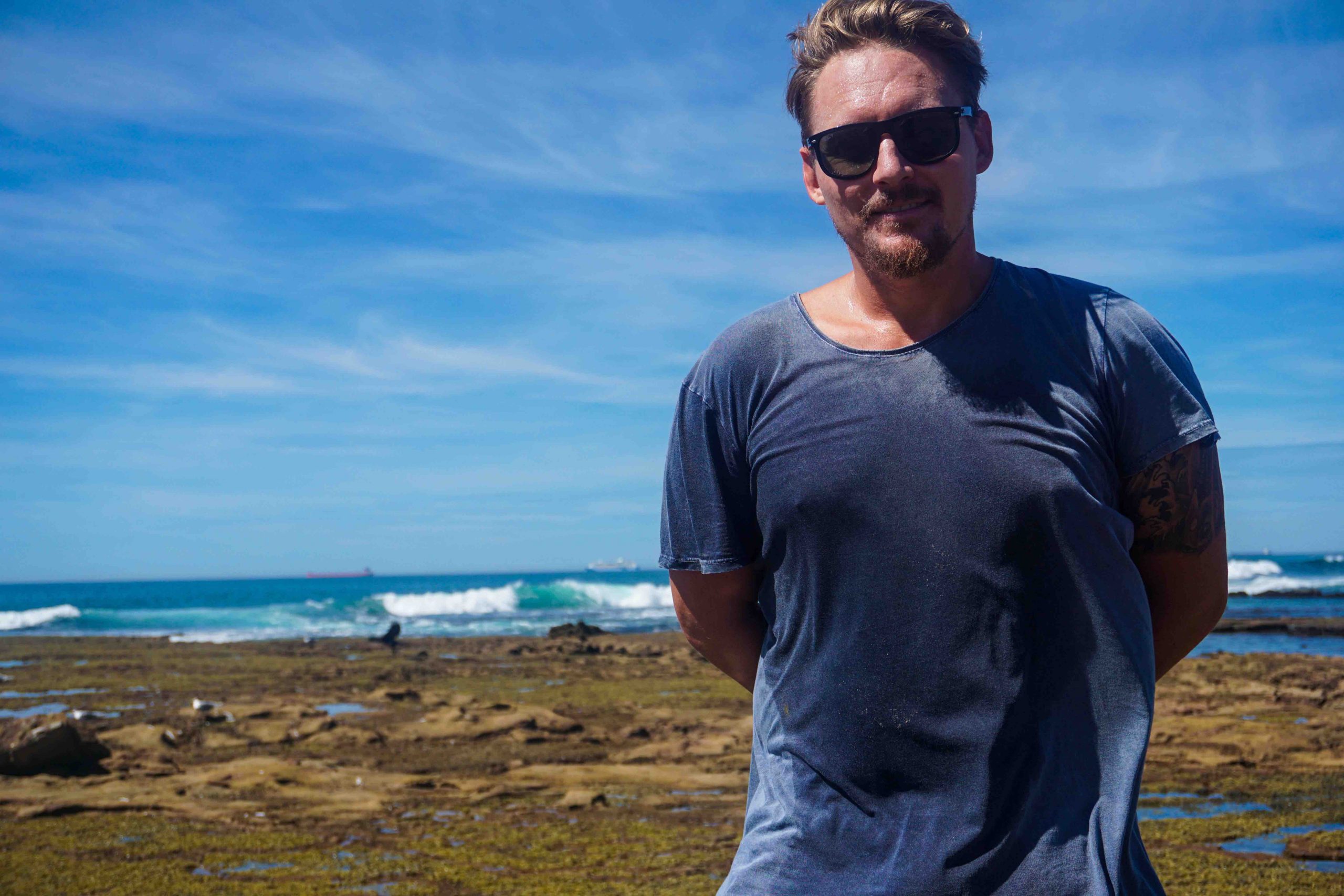 Collins was 25 at the time of his accident. He liked to party and surf, but his right knee was so badly injured he couldn’t even drive his car. His life came to a total halt – and that’s when he picked up a camera. “I read the manual back to front and took photos of my Staffy Bull Terrier,” he says. “I spent that time learning how to manipulate shutter speed and aperture, and the dog was my muse.” Six months later, when Ray was allowed back in the ocean, he took his new talent to the water.

“I took some shots of my friends surfing and I just couldn’t believe it,” Ray says, eyes wide, still in disbelief. “I looked at my photos thinking: ‘Wow. That’s something I’d see in a magazine’.”

He wasn’t wrong. Within two weeks one of his shots was on the cover of Surfing Life, and since then he’s become one of the most influential ocean photographers in the world. He’s published two books, won multiple awards and featured in Patagonia’s documentary Fishpeople. He’s collaborated with Lumas galleries in New York and had solo exhibitions at Photokina in Cologne and Pitti Uomo in Florence. He’s spoken at environmental and photography festivals across Europe and teamed up with Greenpeace, Waves for Water and Surfrider to help fight climate change.

“Although my images show these dark, powerful waves, the ocean has never been more vulnerable,” he says, pointing at two quarantined cruise ships sitting a mile out to sea, eerily still. “Look at where we are right now. Everything is in a fine balance.” 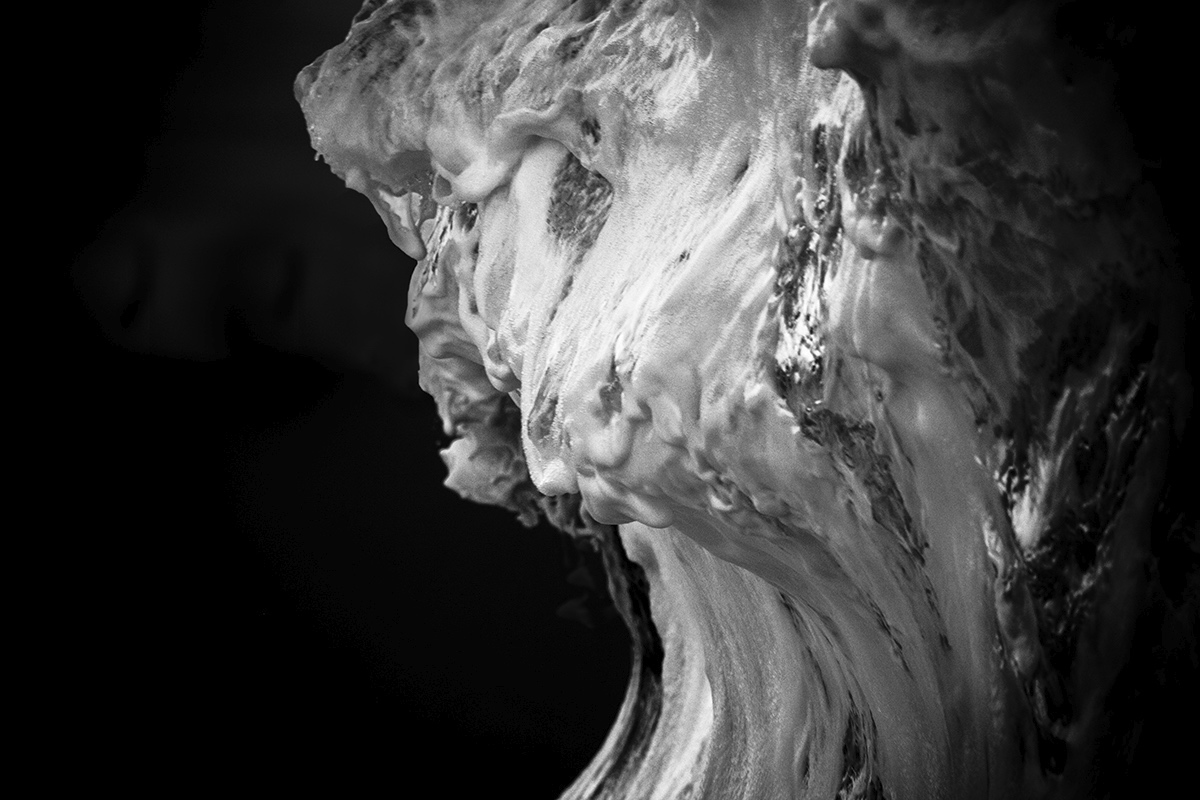 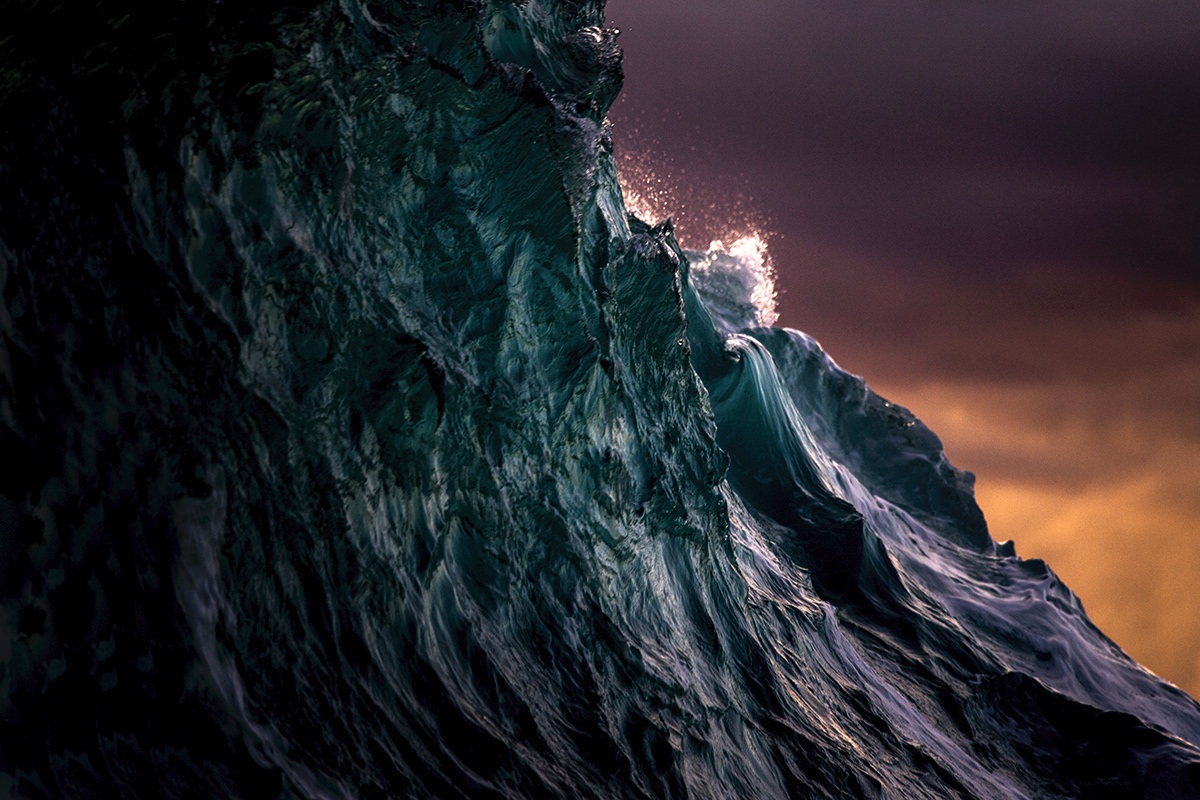 Success has had little impact on Collins; that’s clear from the way he greets everyone we pass. “How are ya?” He says to a couple of women sitting on some grass overlooking the bay. “Getting away from the screens are ya? Getting some fresh air? How good is it, eh?” They beam at him, lit up by his warmth and interest. “Continue having a nice day,” he says. Then, as an afterthought: “And keep your fluids up!”

The photographer is immeasurably modest, unwilling to dwell on all he’s achieved in the world of photography. “I’ve had to learn recently to embrace my truth and my story,” he says. “Growing up we bounced around, me and my mother. My father committed suicide when I was eight. Life was really unstable and we relied on government assistance. It was real troubling, but when you’re a kid you don’t know any different – it’s just your life.”

“The ocean has been the only constant in my life. Whenever I felt stressed, it was always there. And I’ve taken a lot of my life lessons from that. Patience, timing, getting in and out of the surf. Humility. Whenever you think you’re the man, you just get immediately flattened.”

Collins points to his forehead. “See this scar?” he says. “That happened last year. I’d just surfed the best wave of my life. And the very next wave took me under and my surfboard knocked me out. The very next wave!” He chooses to see the scar as a reminder of the good wave; not the near-death experience. 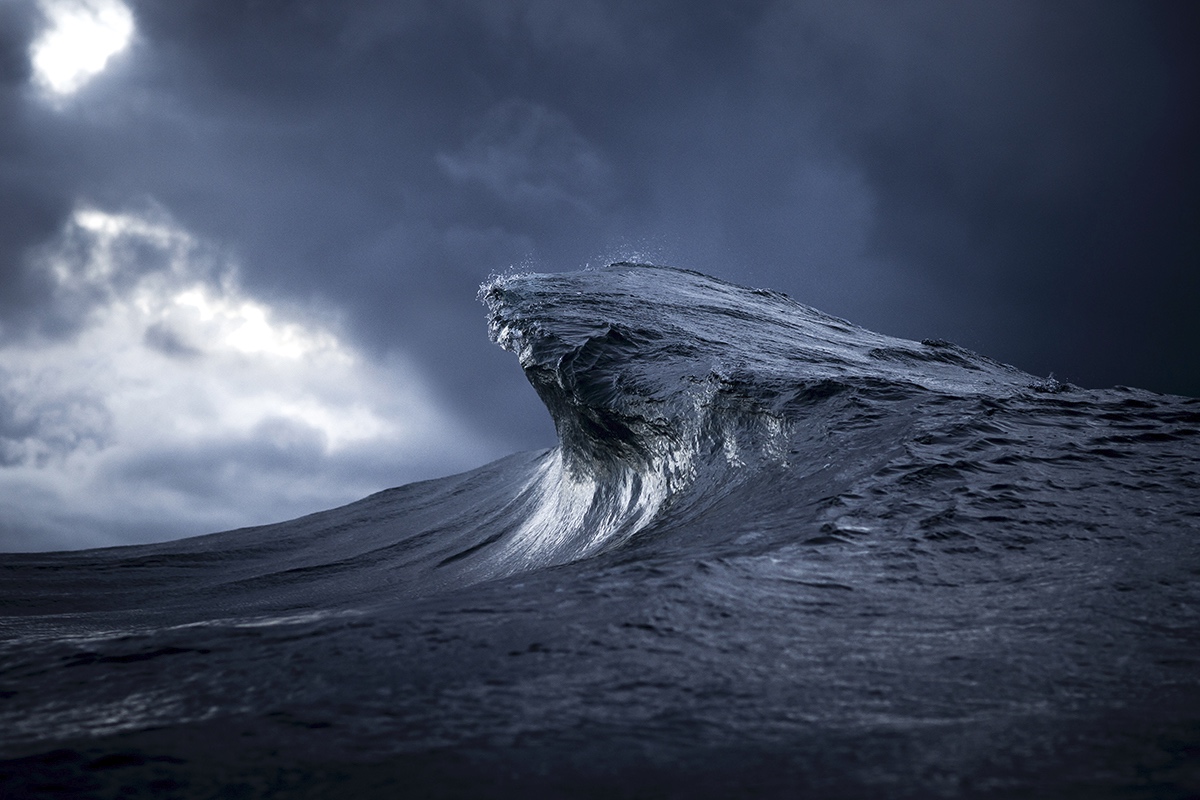 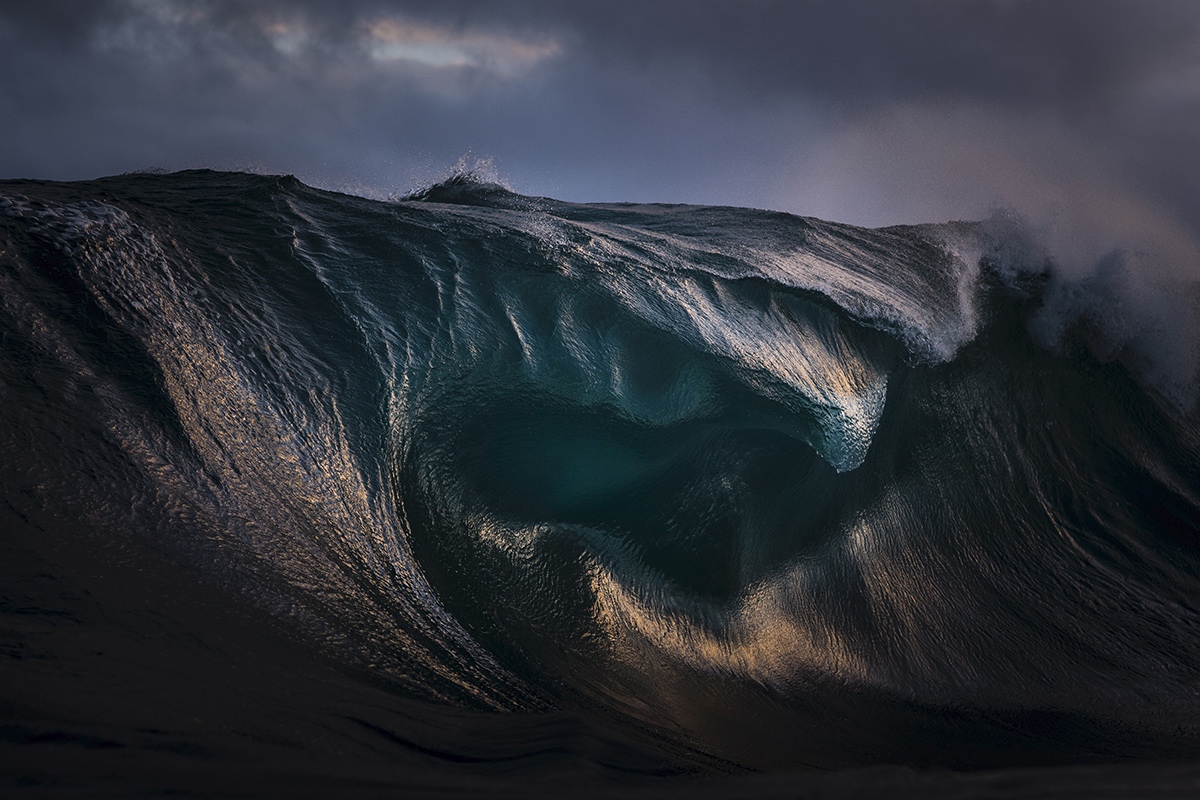 Collins spent years travelling the world taking photos of surfers until November 30 2012, when he decided to quit alcohol: “I got to my 30s and realised I’d spent half my life relying on this crutch, and the other half I’d been a child.” With a long history of alcoholism on both his mother and father’s side, Collins knew it was up to him to break the chain.

“Quitting was a huge turning point for my professional work,” he says. “Those afternoons and early mornings when I used to drink and be hungover, they’re the best times to shoot. That’s when the lighting’s the best, that’s the golden hour. And those opportunities were open for me to explore.”

His new, uncluttered mind gave Collins the space to shoot the purity of the waves, and that’s when he found his path. He points out to sea, to a break way beyond where anyone is swimming or surfing. “That’s where I shoot,” he says. “I swim in the dark, one kilometre out to that break, with eight kilograms of equipment on my back, to shoot inside the waves at sunrise.”

“[My happiest moments have been] the times when I’m really present – when I’m so consumed in a moment, that’s all there is. It’s just me and the waves. But it’s kind of always been that way for me. I don’t know any different.”

These days, when Collins looks back at the difficult times, he only feels gratitude. “I don’t know if I would’ve got into photography if I hadn’t been locked inside for six months,” he says, finally. “I wouldn’t have had the time to sit down and stop and reflect and start over.”

“I don’t know if there’s any rhyme or reason or if its just fate. All I know is I’m here now, doing what I’m doing.” 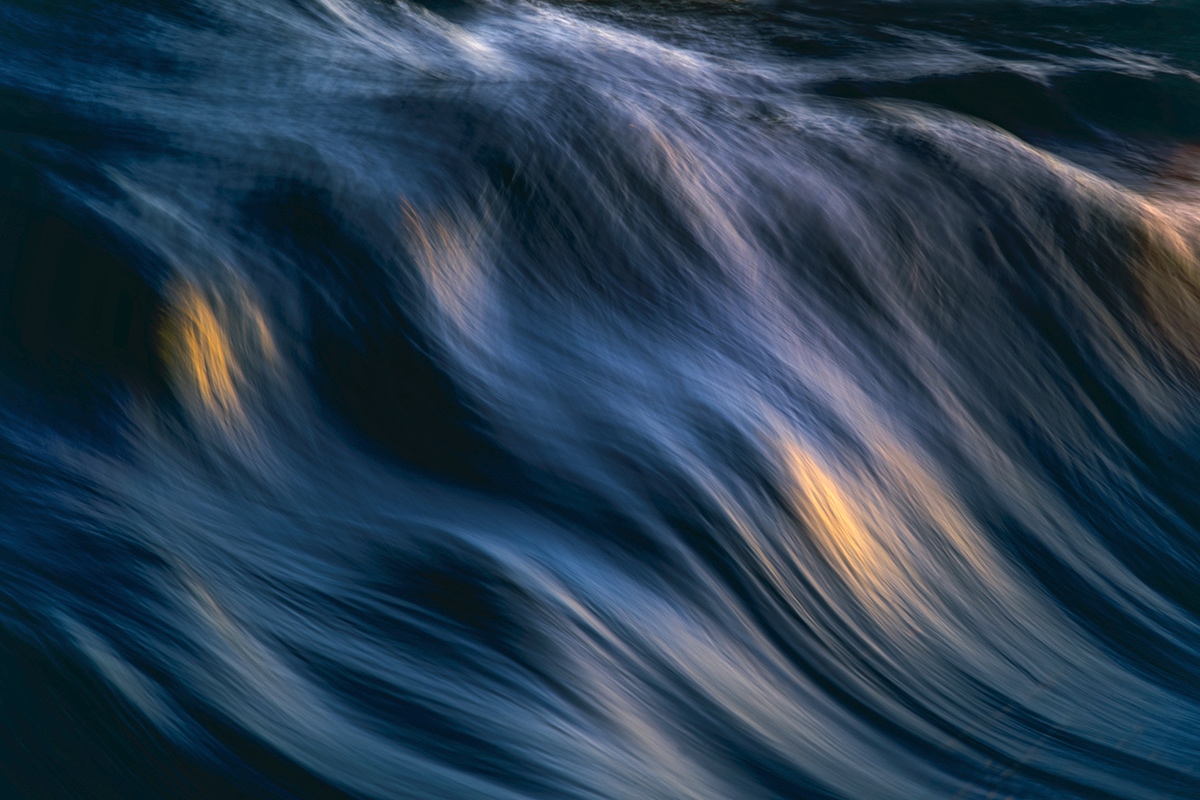 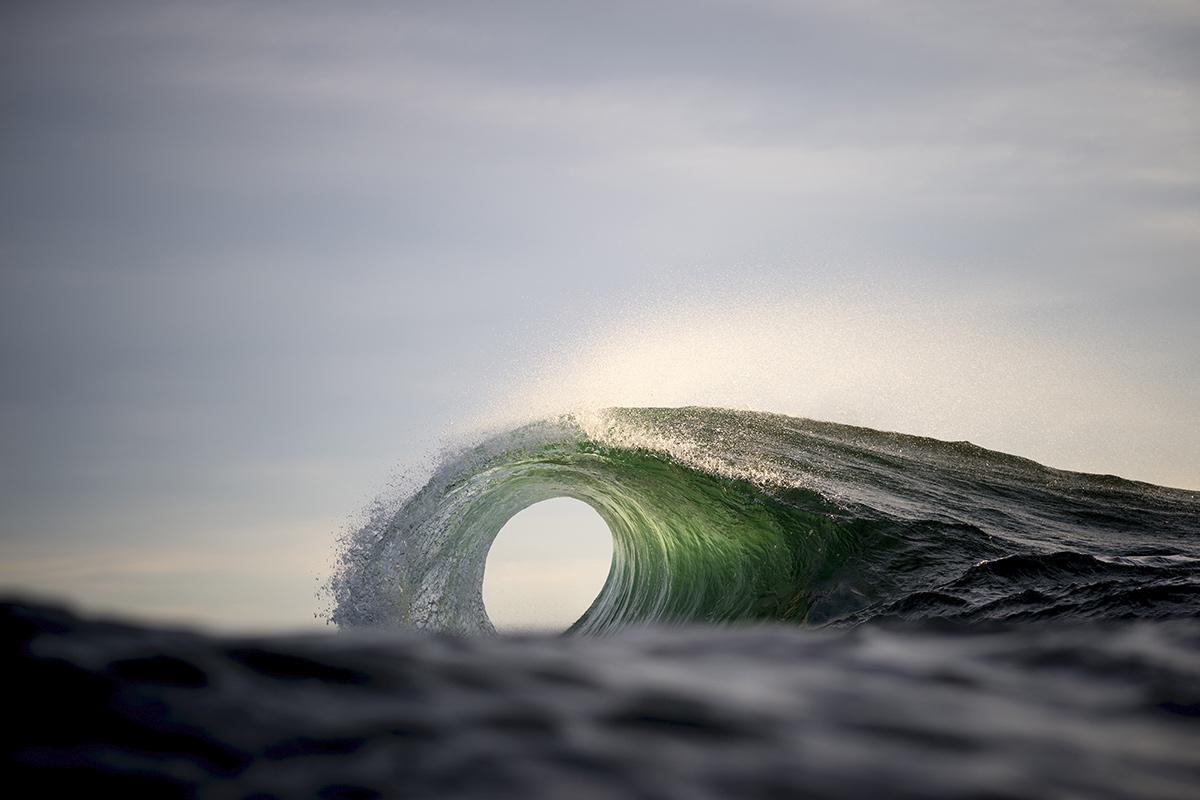 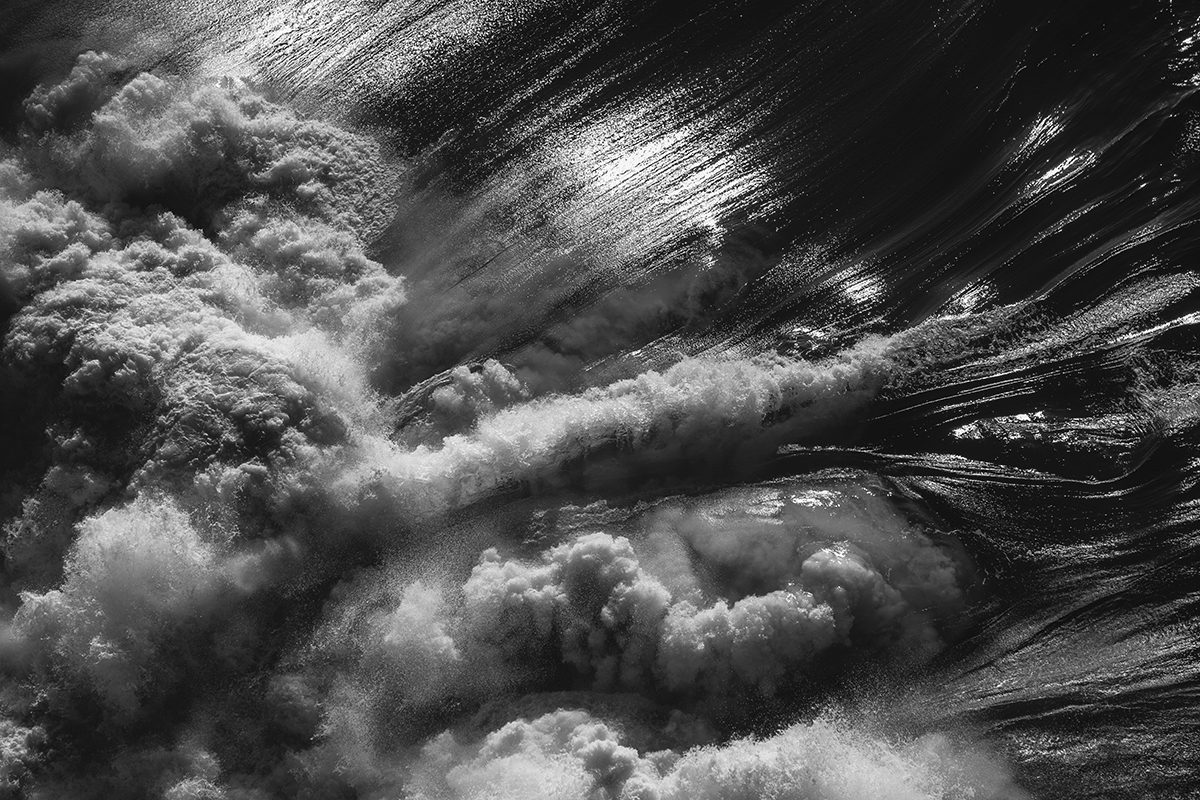 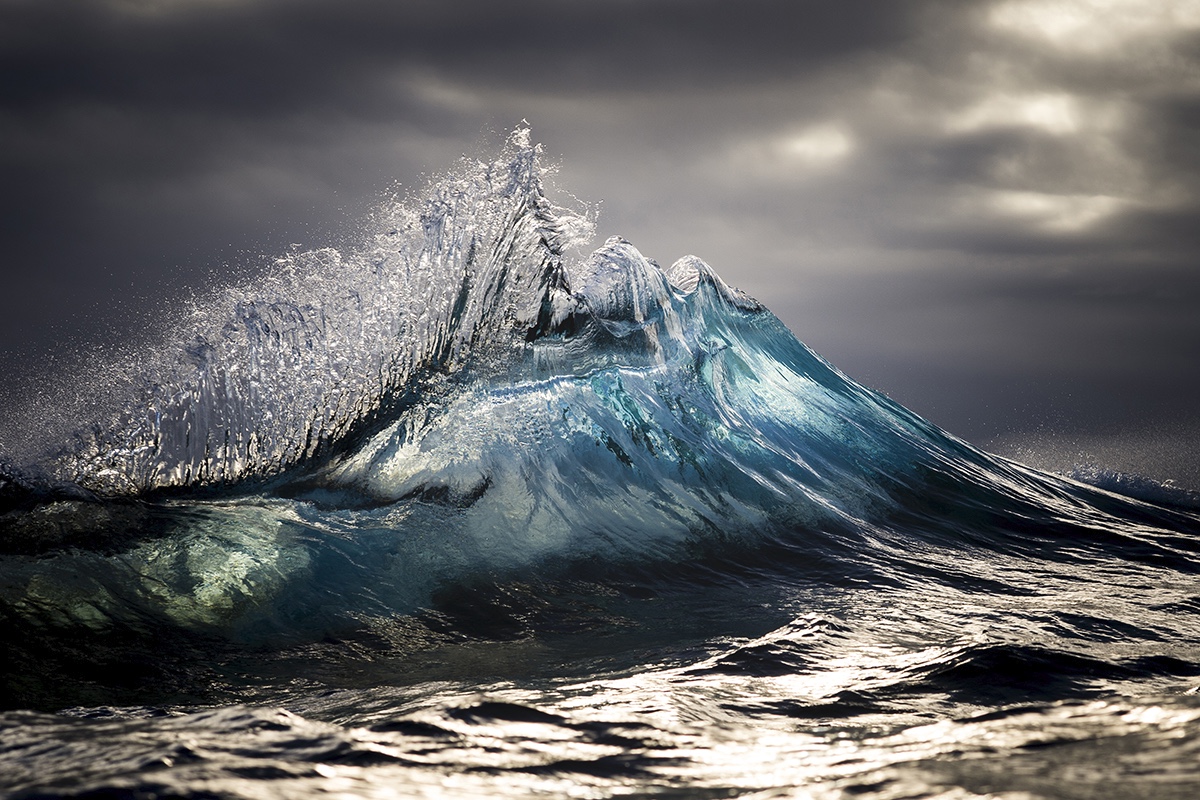 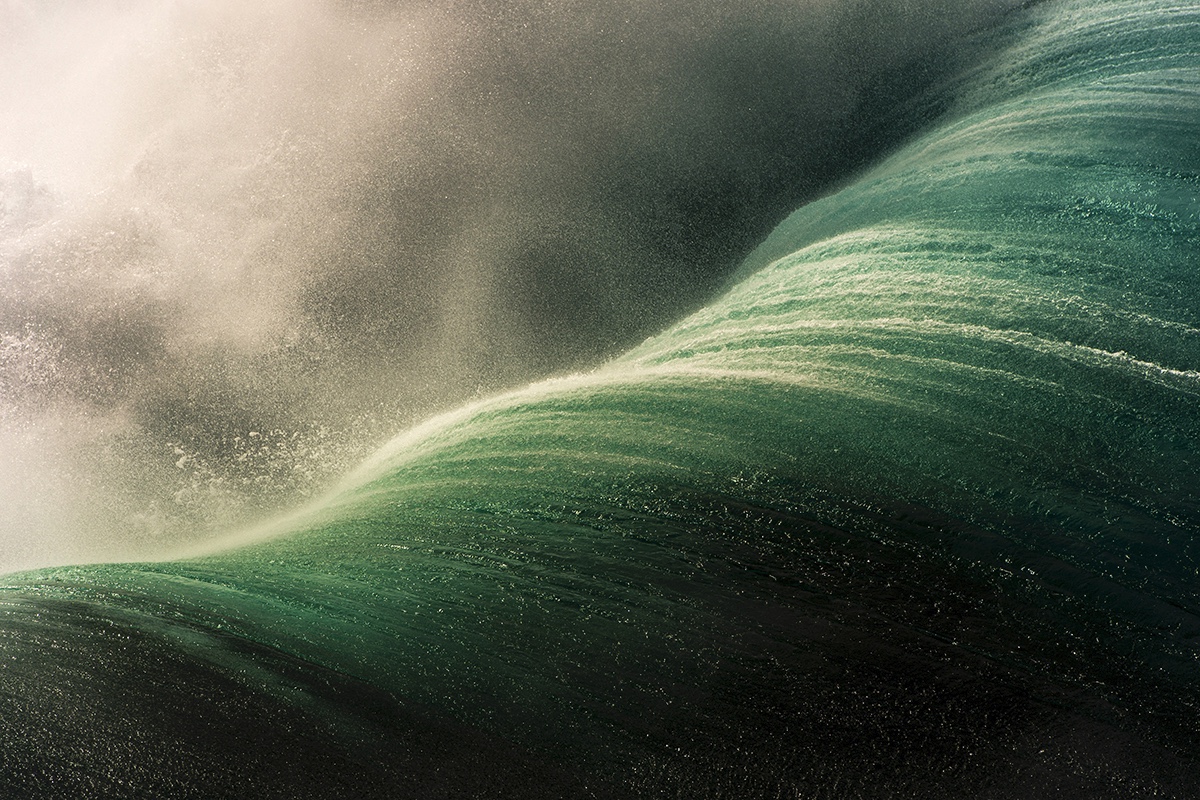 Linkedin
RELATED ARTICLES
OTHER ARTICLES
Yesterday queer activist group Lesbians and Gays support the Migrants staged a die-in at the Pride in London parade to protest the inclusion of police in the march reports Huck politics editor Ben Smoke.
For decades, an area of East London has served as a community hub for Vietnamese people looking for a taste of home.
Whether it's partygate, the climate crisis or the spiralling cost of living, the fightback begins on the picket lines writes Tommy Vickerstaff
The last few years have seen an increase in LGBTQ-led initiatives to feed the hungry, with many finding ways to stay afloat despite the challenges.
The overlooked story of Leicester’s inaugural Pride march is a reminder of the power of collective resistance in the face of far-right bigotry.
Wealth inequality and the rising cost of socialising is placing a strain on people’s relationships, reports Eve Upton-Clark.