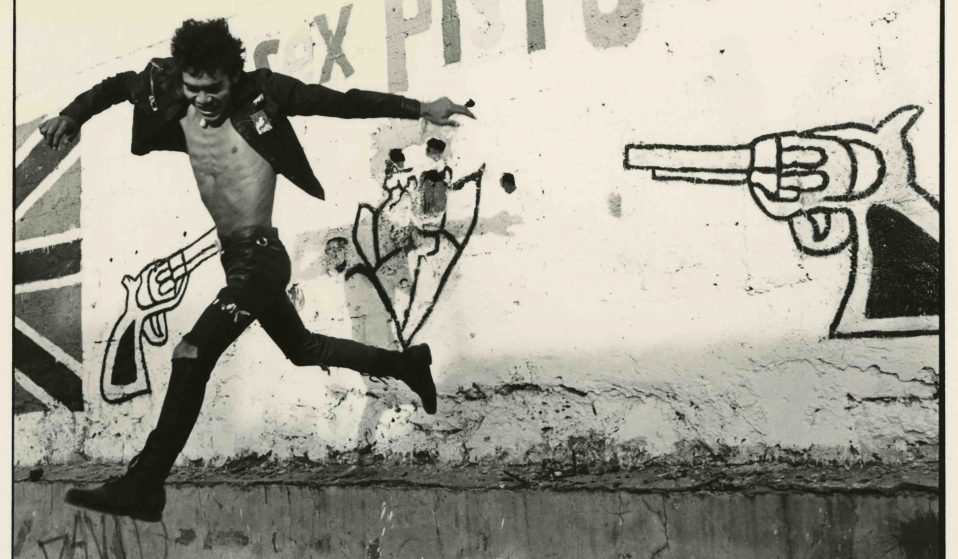 From Cuba to Argentina, a new photography show shines a light on the uprisings and revolutions that have shaped the last half a century.

From Cuba to Argentina, a new photography show shines a light on the uprisings and revolutions that have shaped the last half a century.

“I am not a liberator,” said Ernesto “Che” Guevara in 1958, just one year before the Cuban Revolution transformed the landscape of Latin America. “Liberators do not exist. It exists when people liberate themselves.”

This historic movement for independence from western imperialism marks the starting point of the new exhibition Urban Impulses: Latin American Photography from 1959 to 2017. Curated by María Wills Londoño and Alexis Fabry, the show features more than 200 works by over 70 artists; including masters of the medium Alberto Korda, Graciela Iturbide, Sergio Larrain, as well as lesser-known artists such as Enrique Zamudio, Beatriz Jaramillo, and Yolanda Andrade.

“The purpose of the show is to bring a counterpoint to Latin American photography beyond gazes that have an exoticising point of view,” says Londoño. “We want to introduce new perspectives focusing on the chaos and crisis of utopian models of modernity.”

Organised into two themes, Shouts and Pop-ular, the exhibition explores the role of the city as a political and cultural force – a space for artists to literally take to the streets in order to create and share their work. Recognising the particularity of individual countries, the curators set forth to showcase these distinctions while simultaneously highlighting the commonalities of a once-colonised people manifesting their own destiny — and the struggles they face from within. 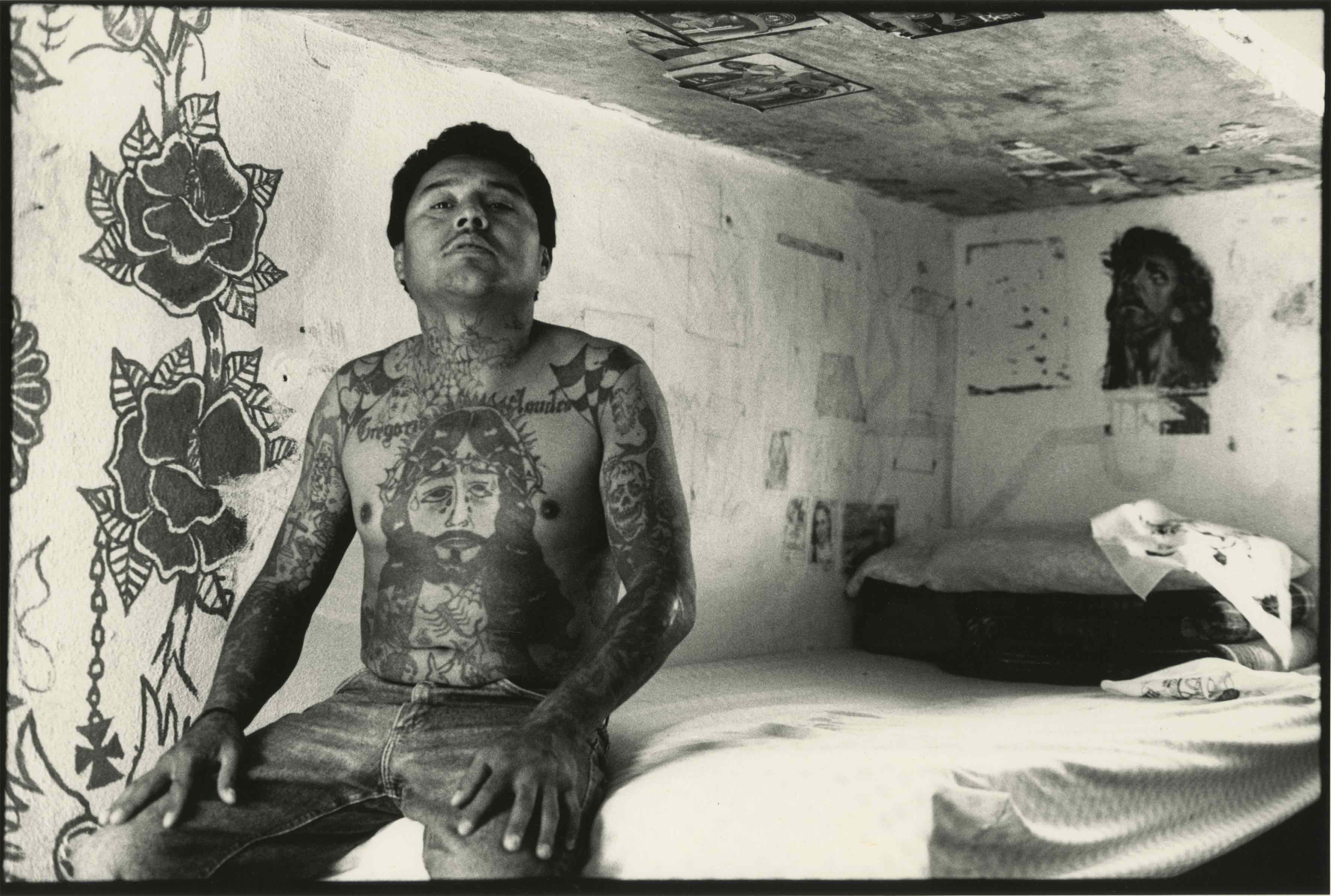 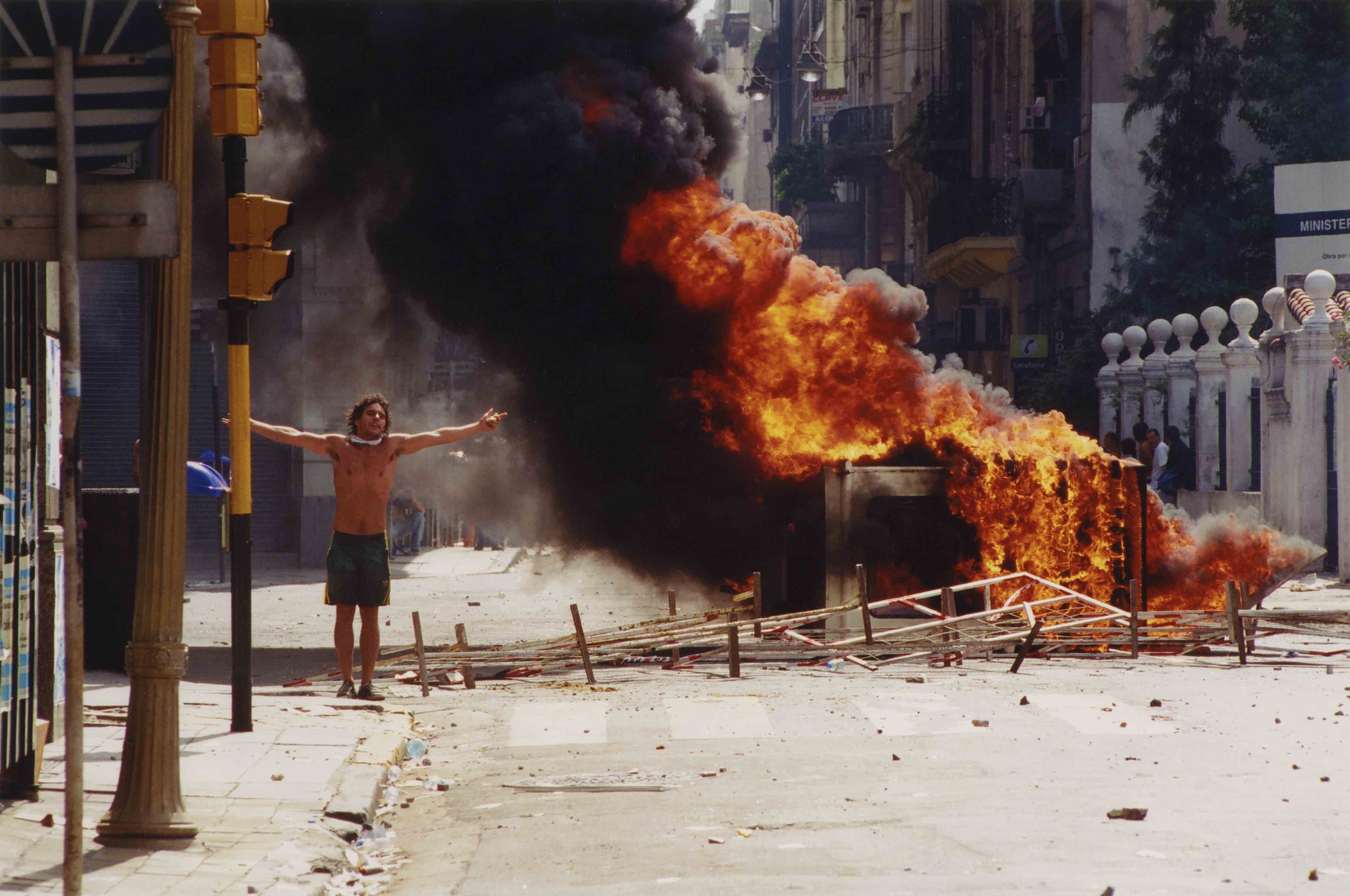 “We were interested in the way photography developed in a place where there is a lot of scarcity in mediums, no photo academy or universities where you can become a photographer,” Londoño says.

Fabry continues: “Many images in the show are printed mediums that don’t come from the fine art world, often due to lack of means. Many use Xerox printing, the cheapest and easiest way of having a print circulate and become popular.”

This is evident in the work of Chilean artist Enrique Zamudio, who created a monument to the disappeared by crafting a ceramic wall covered with portraits taken from identity cards kept by the families. Over the years, the images have been exposed to the sun and dust, fading away, poignantly echoing the fate of the people themselves.

The work of Peruvian artist Nicolás Torres offers a striking counterpoint, a testament to playful and happy attitudes towards life. A low-level construction worker, Torres began making portraits of young people attending chicha parties around Lima — a style of music that mixes folkloric Andrean music with rock and roll and electronic music. After the parties, Torres would hang the pictures on the wall of his home and revellers would purchase the ones they liked.  The portraits they left behind were considered of lesser value, but this deeply appealed to Fabry and Londoño, who notes that choosing to feature works by lesser-known artists alongside the greats has had a profound effect.

“Suddenly there are discoveries all over the place and people are touched,” she says. “They have been living a little sadness of not having a strong public locally, so having their work seen here has been very important for them.” 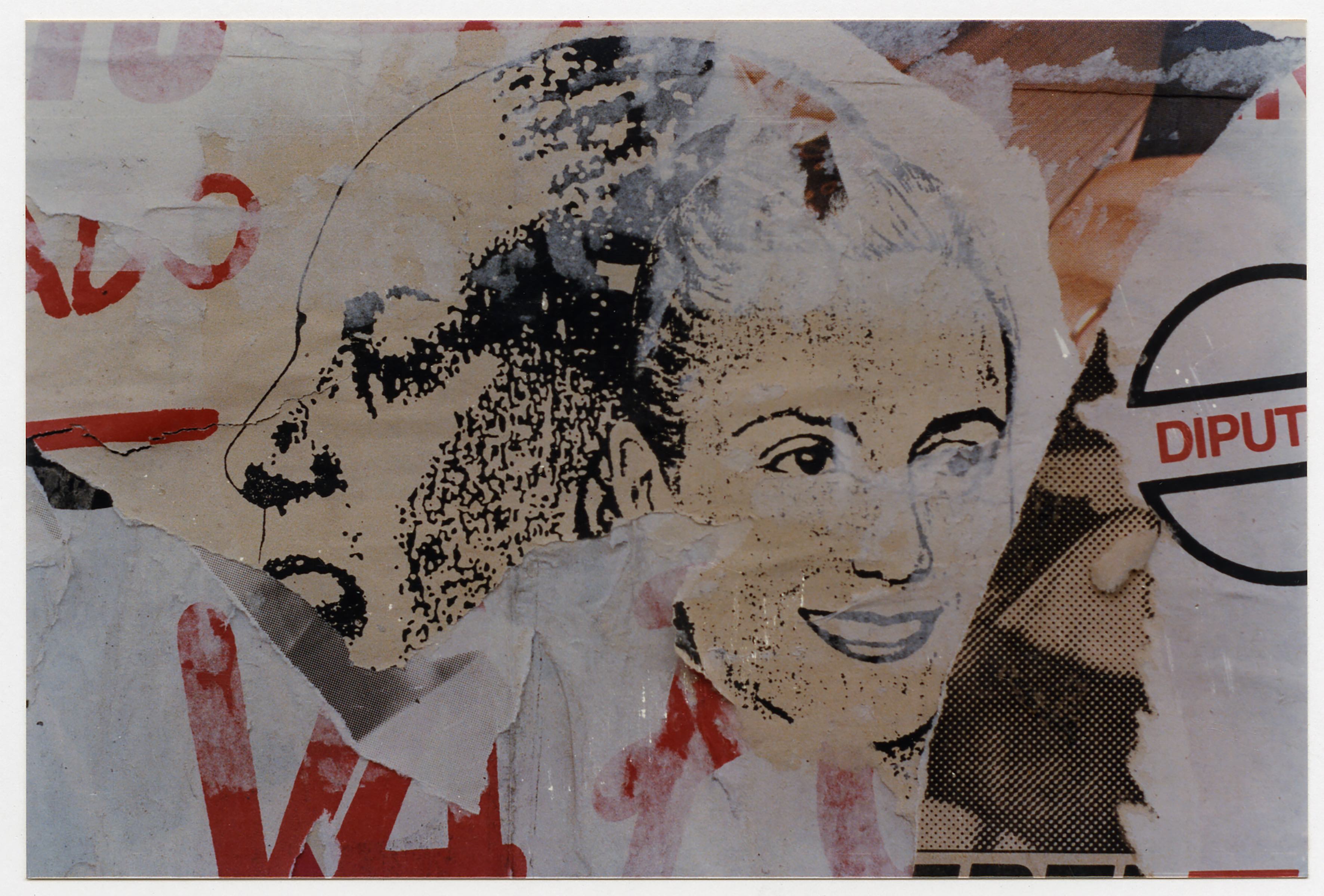 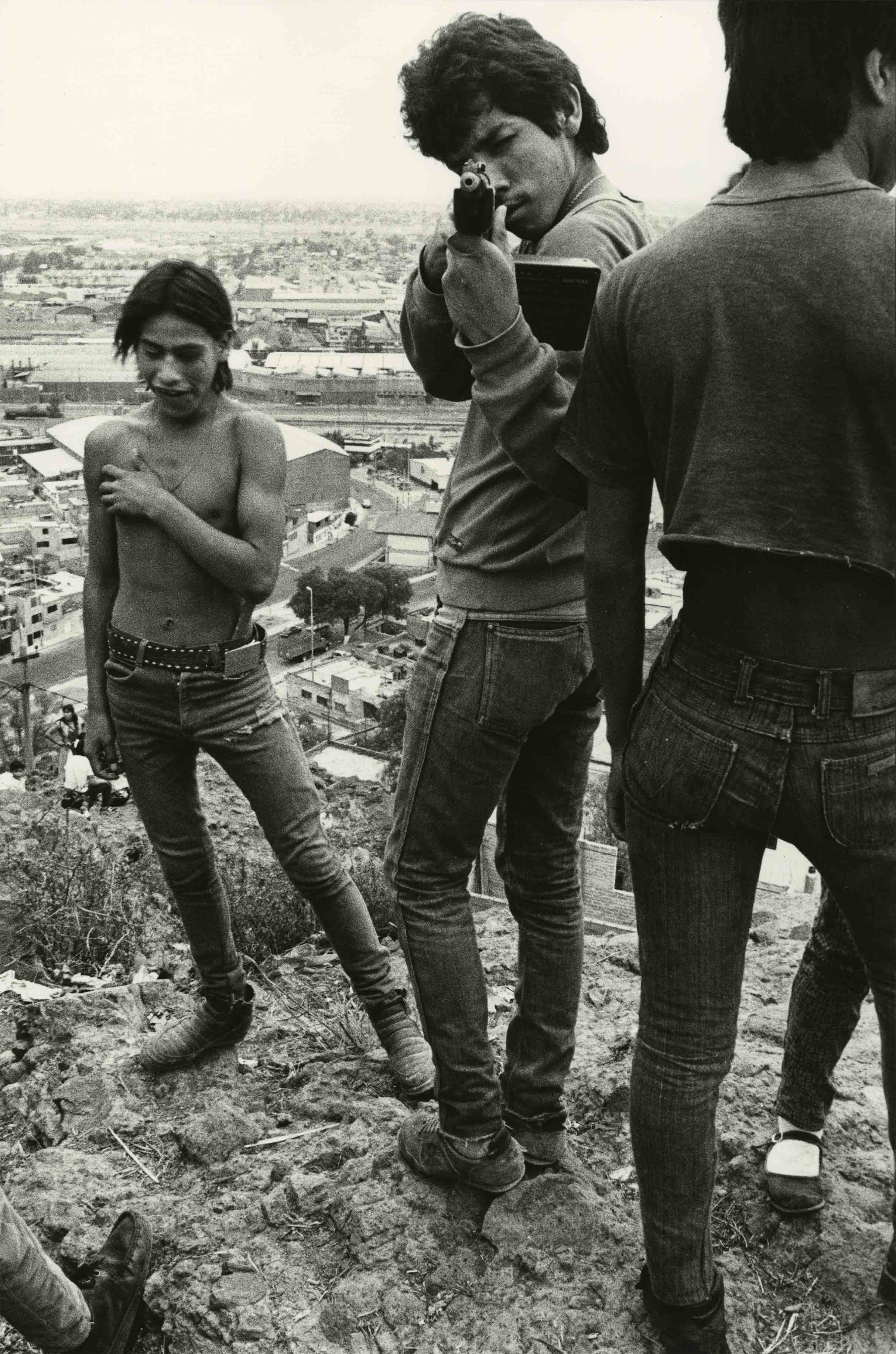 Pablo Ortiz Monasterio. If You Shoot, I Shoot, Mexico City, 1989 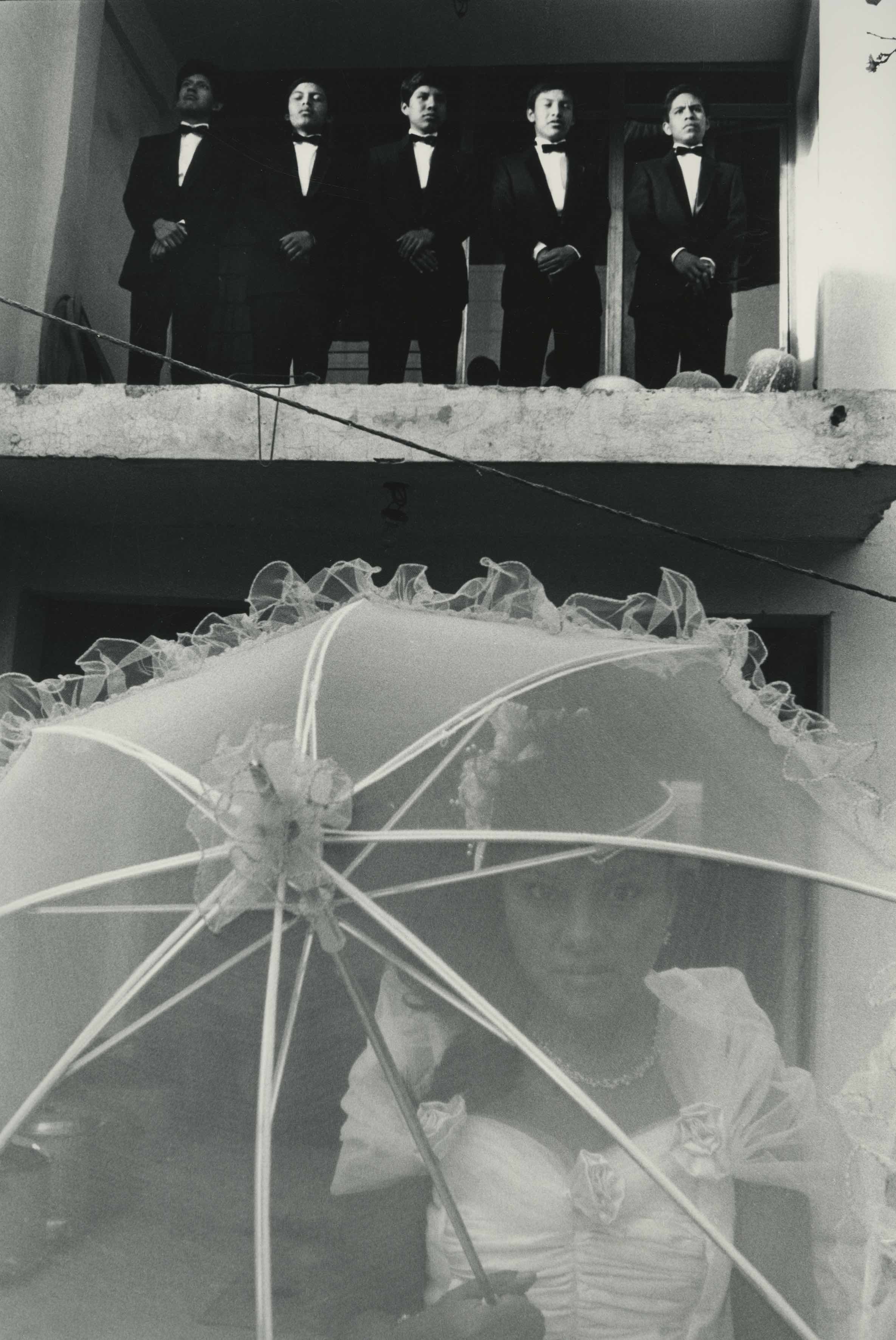 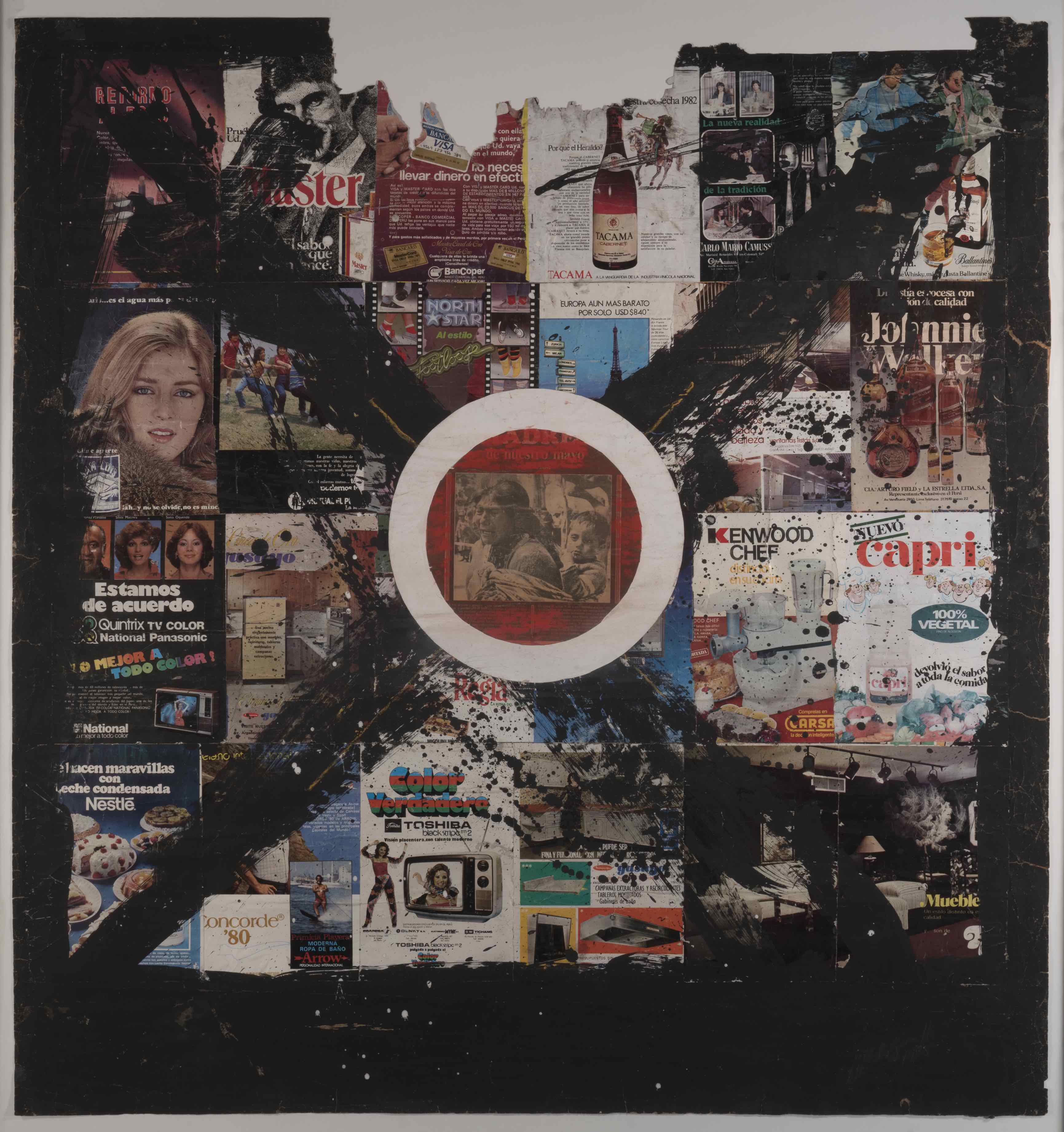 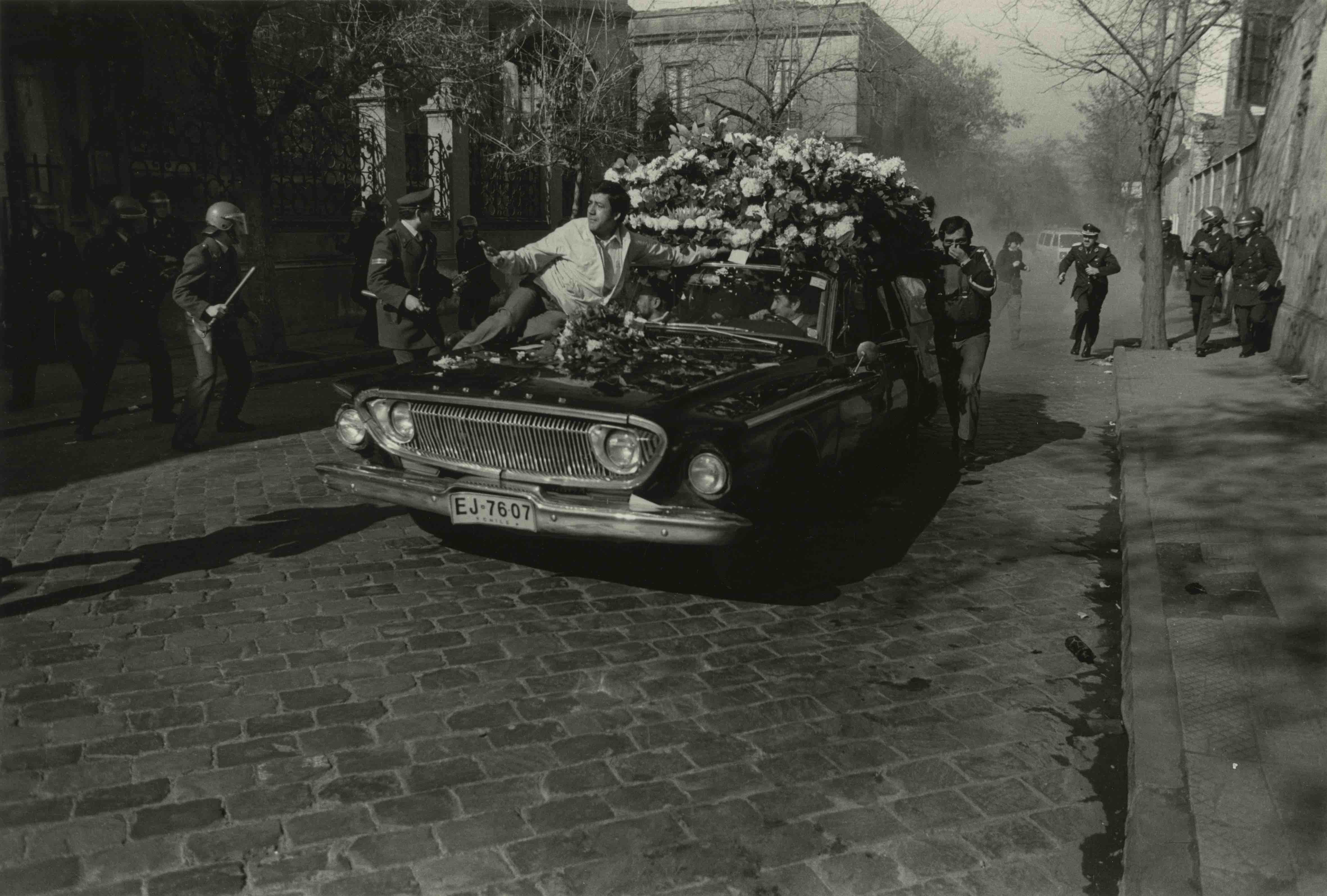 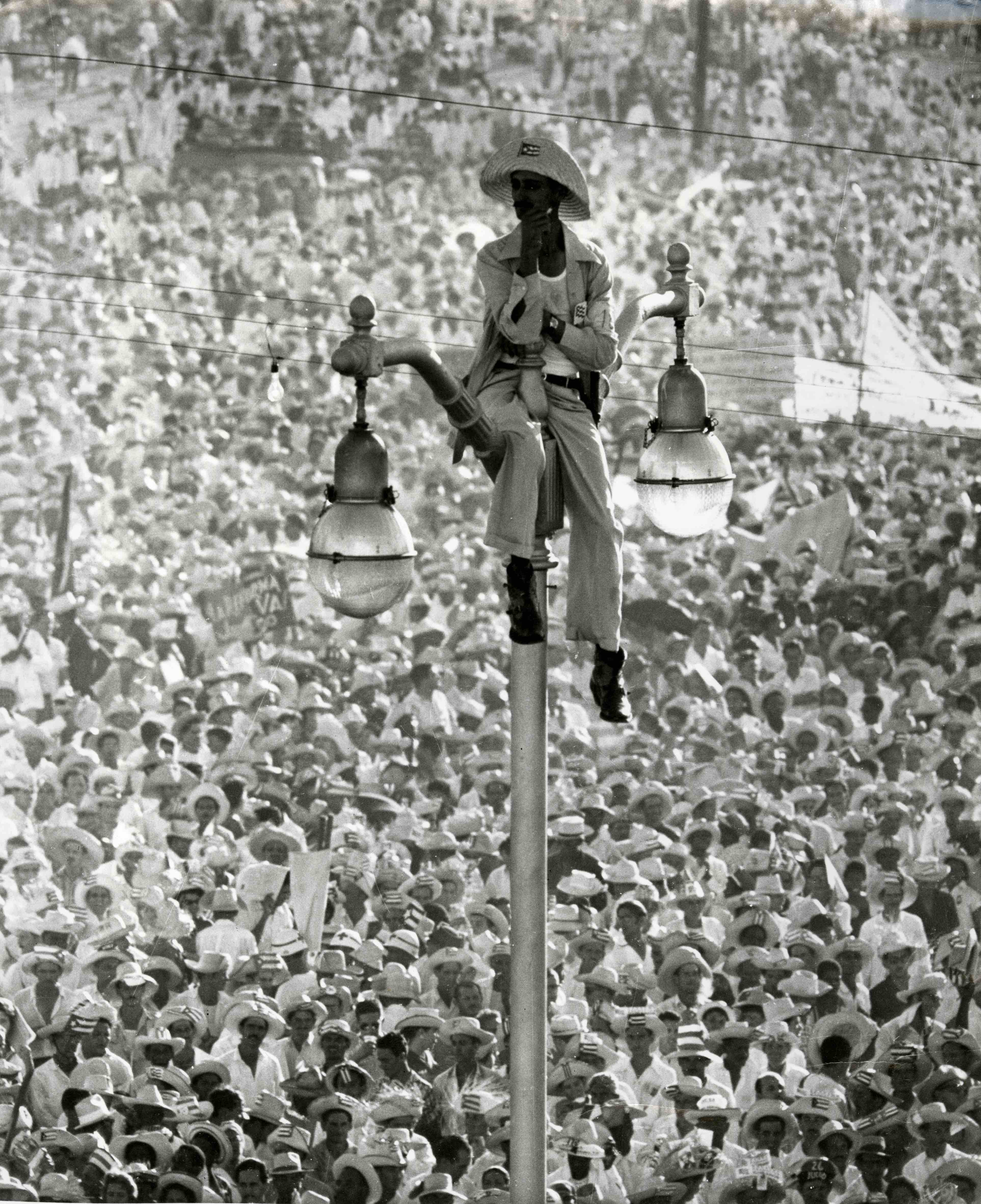 Alberto Korda. The Quixote of the street lamp, Cuba, 1959 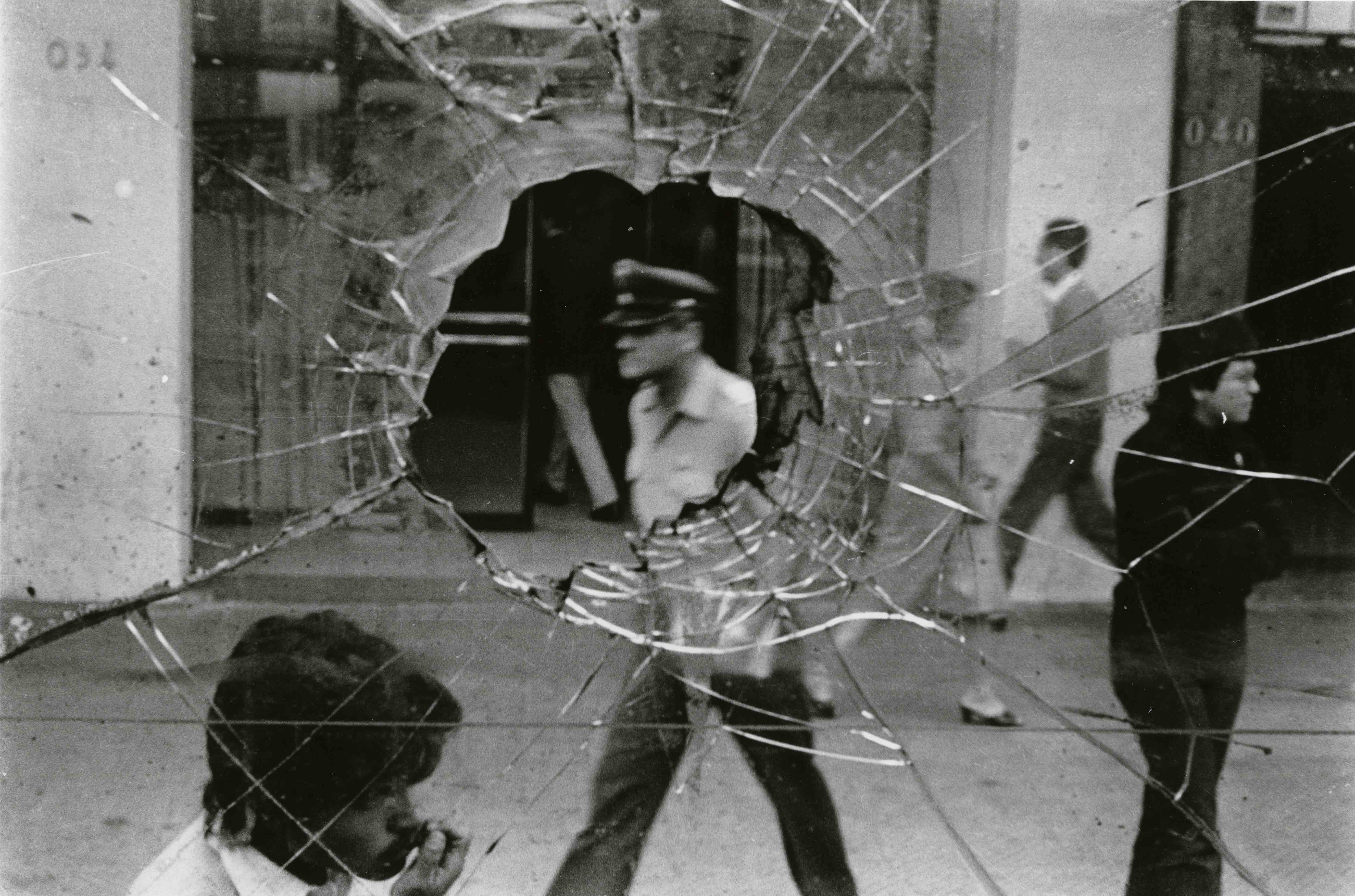 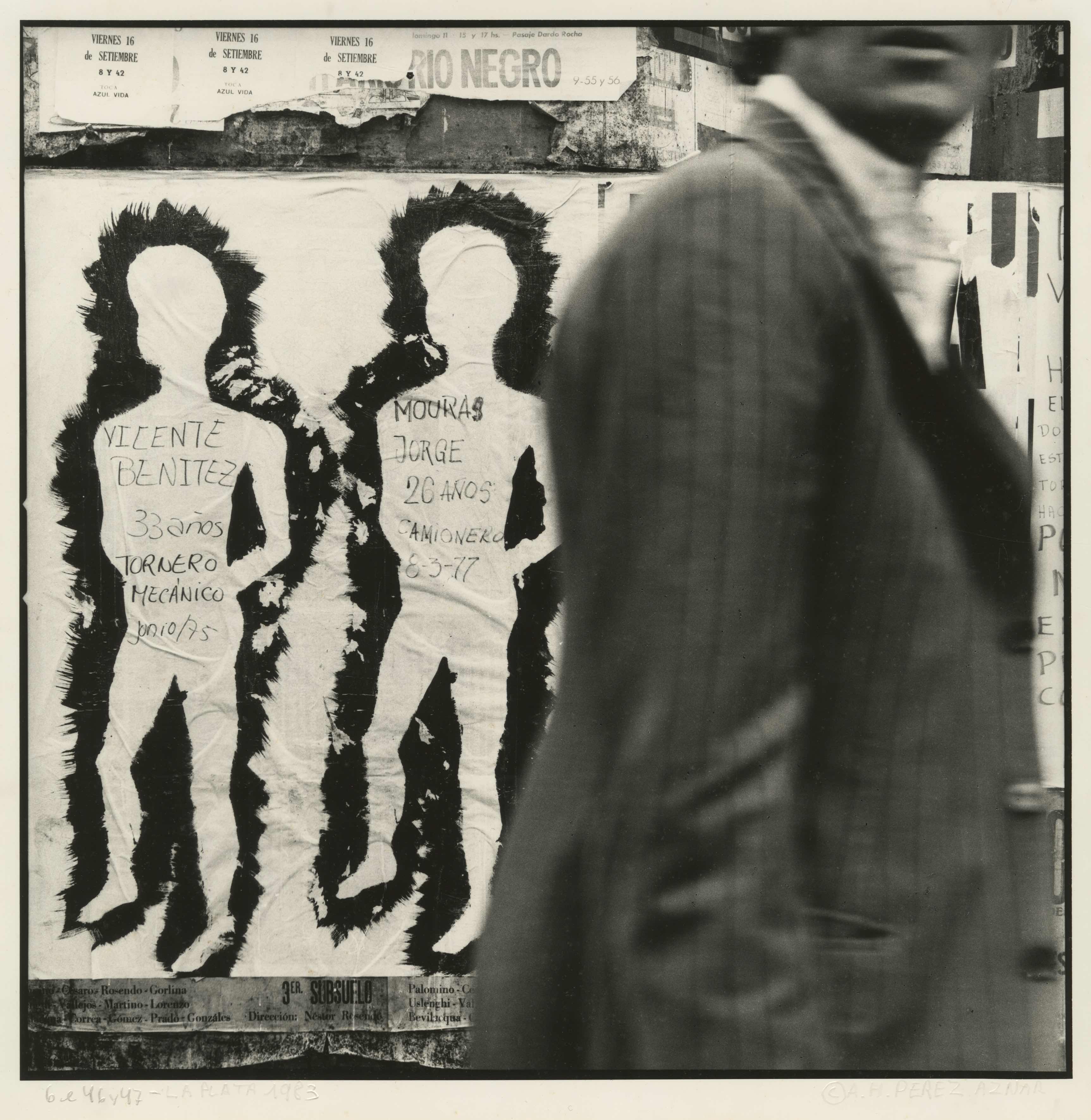 Urban Impulses: Latin American Photography from 1959 to 2017 is on view at The Photographers’ Gallery in London until October 6, 2019.

Linkedin
RELATED ARTICLES
OTHER ARTICLES
The workforce is now gearing up for industrial action after receiving a measly pay rise, reports Ella Glover.
For over a decade, gamblers have won big by employing people to place live bets from the court. But does this dubious method still work?
As the Scottish government announces a rent freeze, an activist with Living Rent who fought and won shares how they did it, and what must come next.
A 37-year-old woman shares how her abortion led her to become a clinic worker, and the abuse she’s received in that role.
Photographer David Corio’s archive offers a glimpse inside a revolutionary era of music and nightlife.
The idea that a younger generation is abandoning work has become a popular narrative online, but it doesn’t necessarily reflect reality.