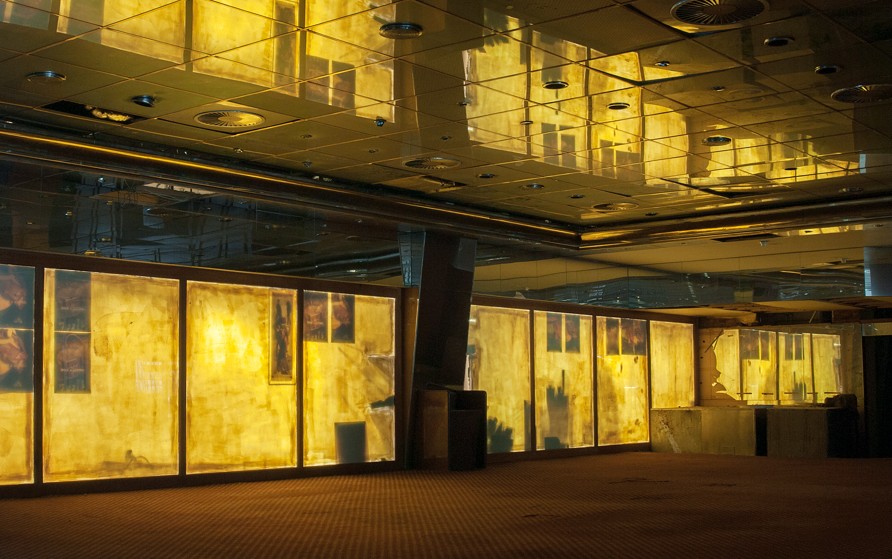 Celebrities, politics, murder... Johannesburg's Carlton Hotel has seen it all. But as two artists sneak into its now-abandoned halls, taking pictures as they go, the emptiness speaks volumes.

Yvonne Mueller and Leif Bennett were taking a tour through downtown Johannesburg, guided by a local artist, when they noticed a building that didn’t look quite right: a 30-floor hotel that’s been closed for 20 years but guarded around the clock.

The Carlton is a former 5-star complex with an imposing history. It has witnessed landmark political moments, entertained celebrities and even been home to a murder. But before Yvonne and Leif had heard the stories, all they wanted to do was get inside. 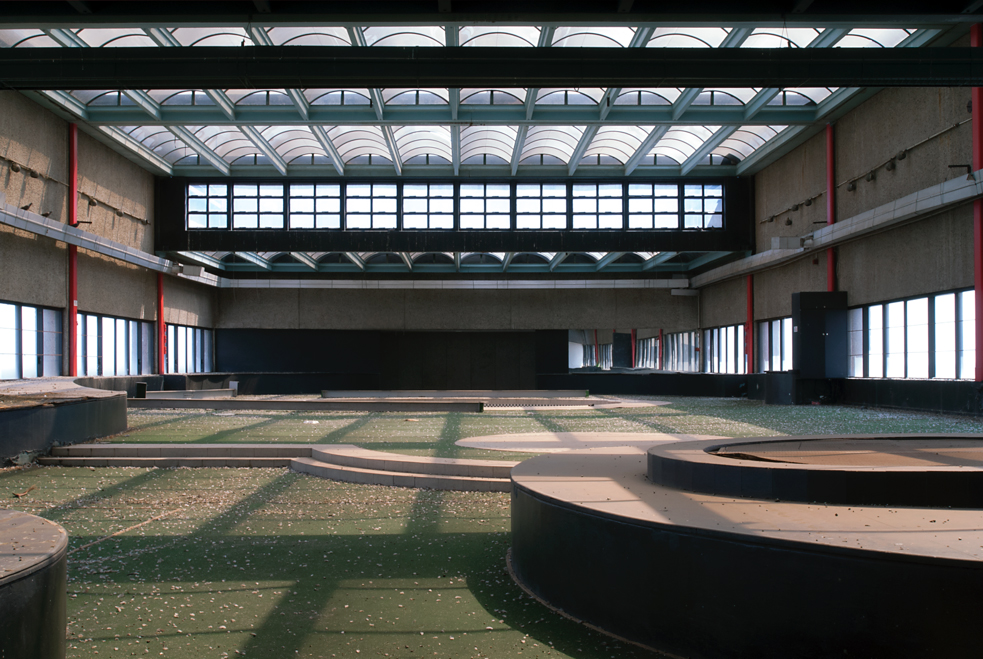 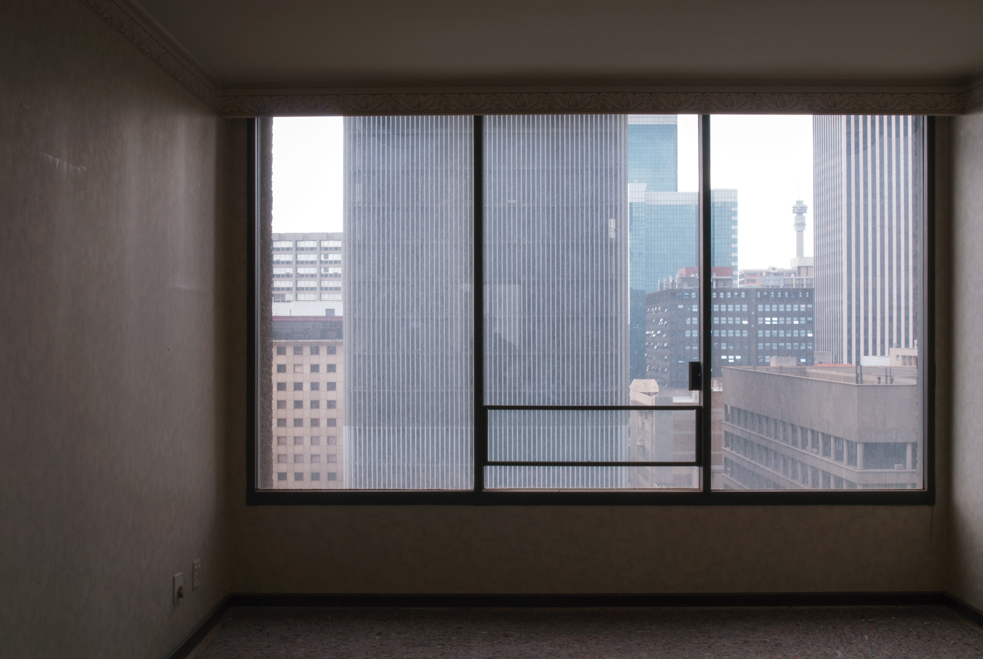 “We felt a bit lost, really,” says Yvonne about sneaking in. “It was quite scary, especially being all alone on one of the higher floors. The lower floors had almost no light and we needed a flashlight, but it was an adventure because you would never know what to find next.”

It didn’t take long for the pair to come up with an idea: a photo project documenting a ghostly space that “managed to encapsulate so much of the history of a country we ourselves did not know very well yet.”

Yvonne and Leif are an artistic couple from Switzerland with interweaving backgrounds. Leif’s father was a photographer, so he grew up in Schaffhausen with black-and-white prints strewn across the house and bookshelves teeming with histories of the medium. 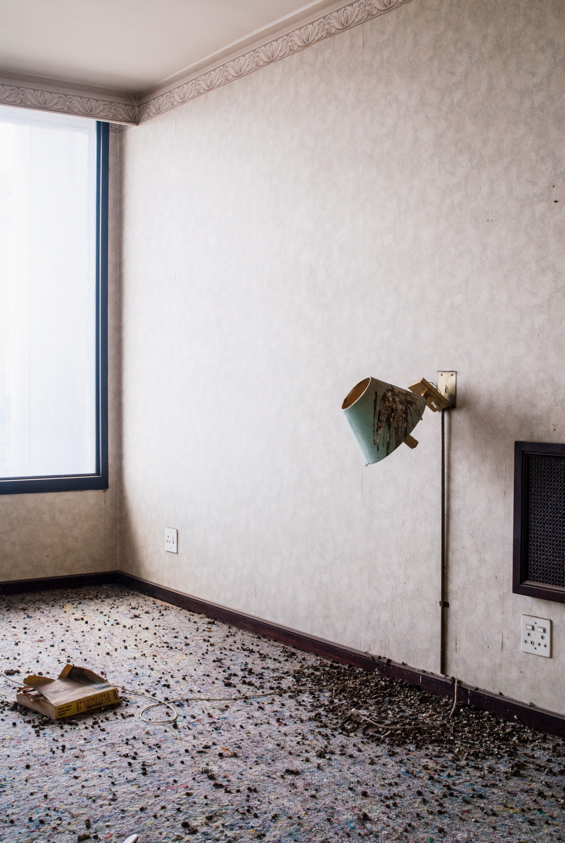 The 43-year-old inherited his dad’s analogue gear but is largely self-taught as an artist, placing huge emphasis on the value of experimentation. Yvonne, meanwhile, grew up in Bern and worked in finance before pursuing her real passion by studying art in Basel and earning scholarships at studios in Paris and South Africa.

They met at a communal studio space, had a daughter together and found ways to spark each other’s creativity. “Unfortunately we cannot work together very well,” says Yvonne, who’s 44. “We tend to end up in long discussions and even fights! Sometimes we have a vastly different outlook on things and it can be difficult to find a compromise. But we are most at ease travelling together.” 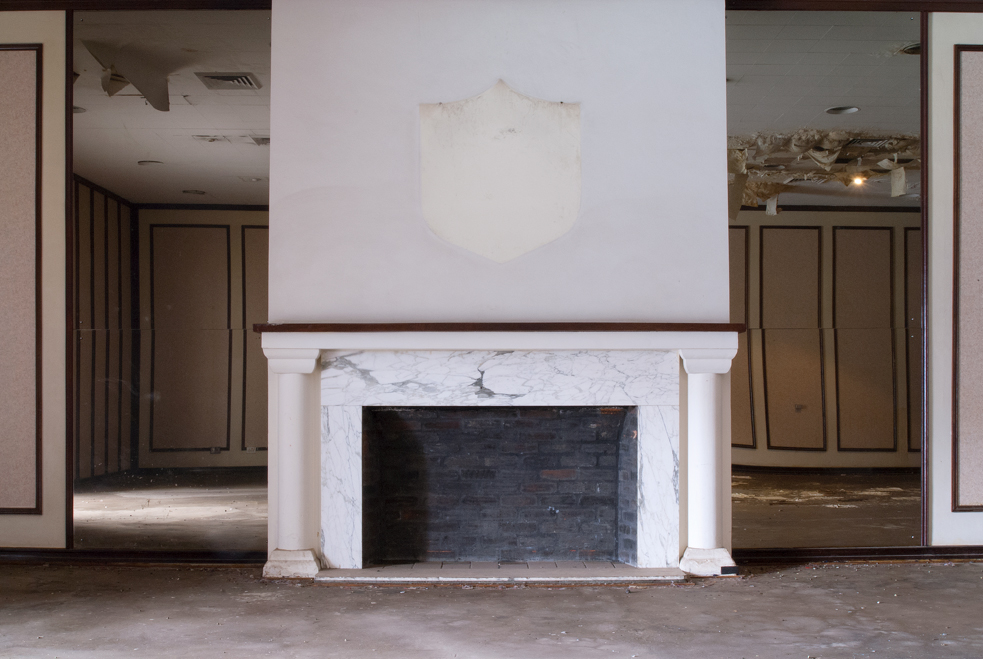 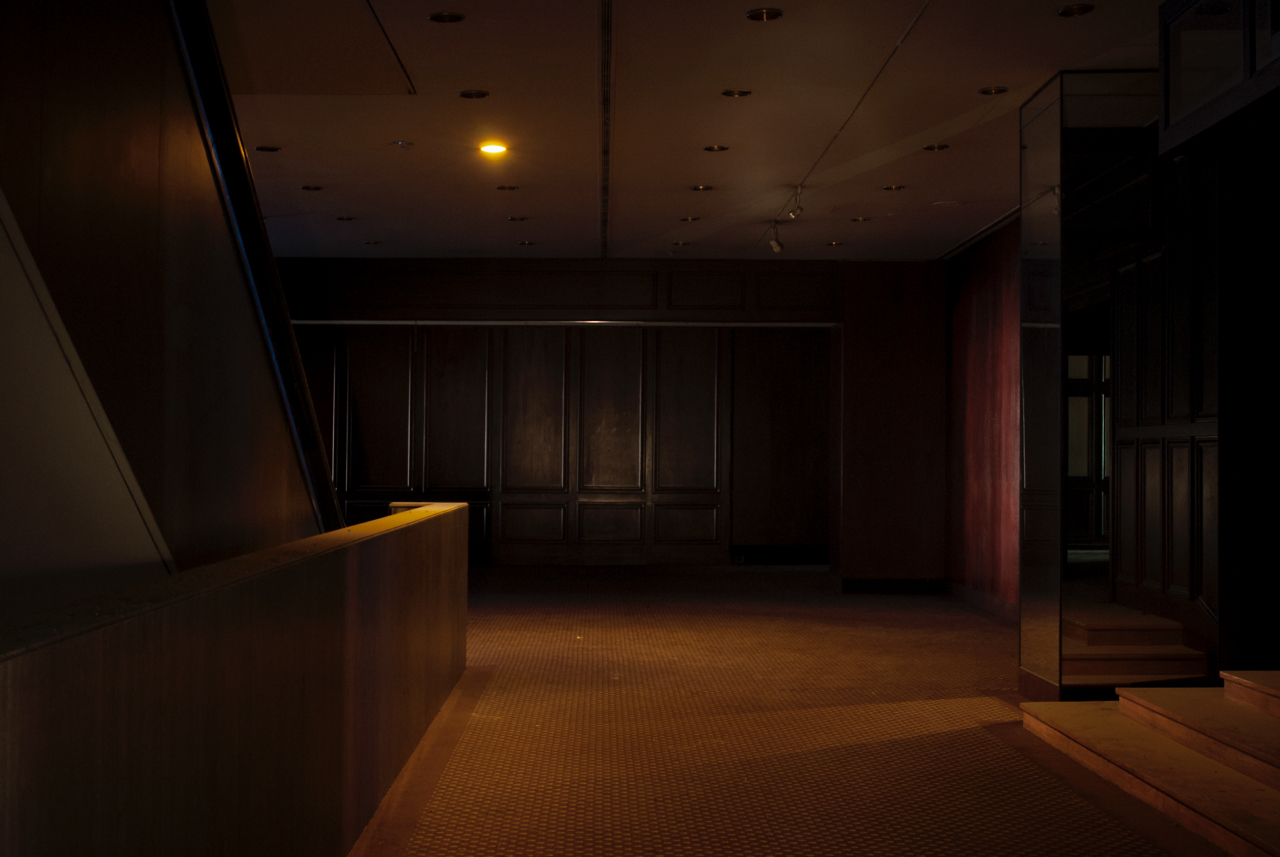 In Johannesburg, the pair were astonished by the Carlton’s empty shell and began to research its history. Past guests included Henry Kissinger, Hillary Clinton, Margaret Thatcher, Whitney Houston and Mick Jagger; there were strikes, protests, bomb threats and high-profile banquets.

Leif and Yvonne established that Nelson Mandela lived in the hotel’s presidential suite during South Africa’s transition from white-minority rule. He held his 75th birthday celebration in its ballroom and, in 1994, gave a victory speech there announcing that he would be South Africa’s next president.

But within just a few years, the Central Business District it was located in deteriorated rapidly and its 670 rooms became impossible to fill. 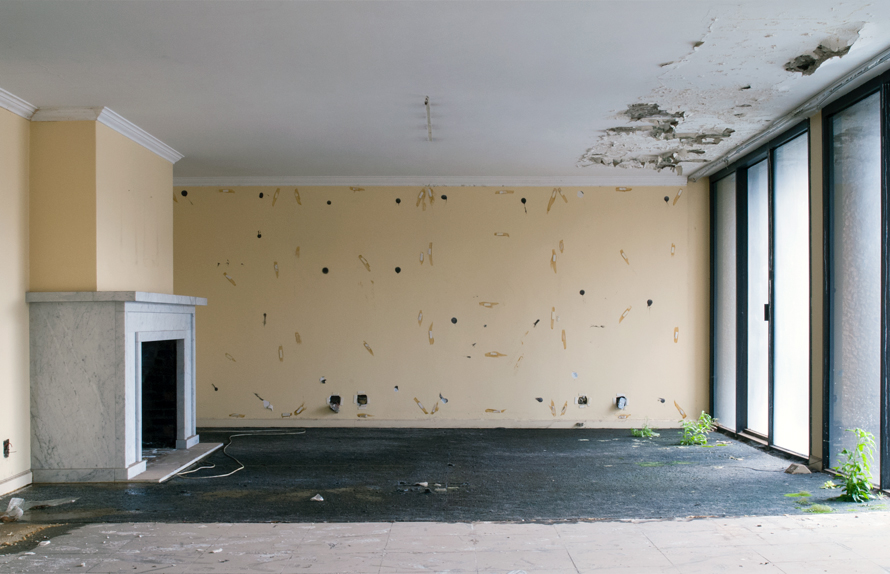 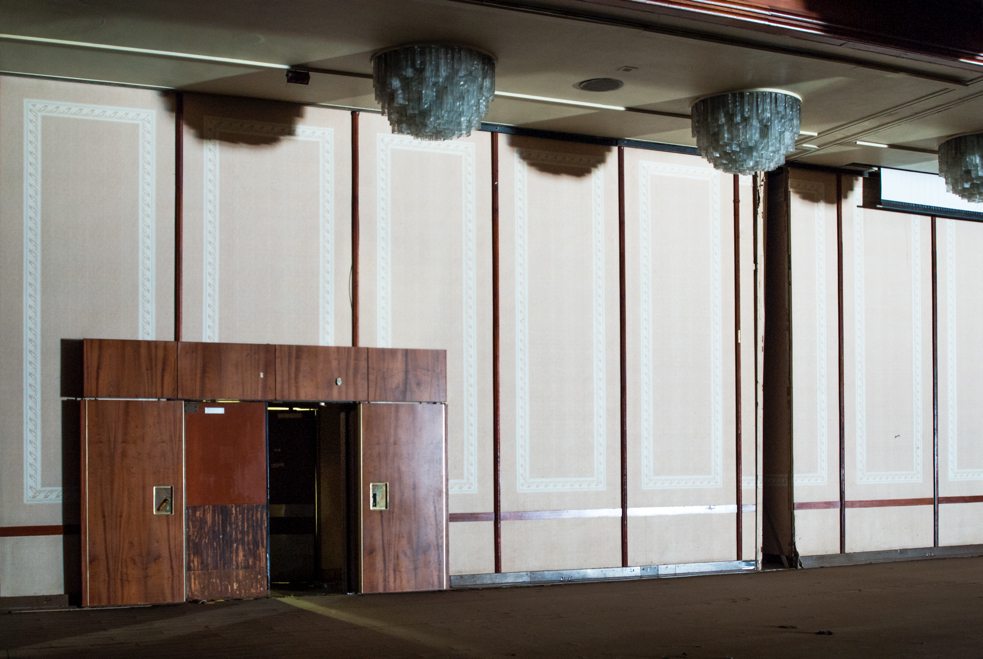 In 1997, two hotel employees murdered one of their managers after he found them drinking on duty. The Carlton was closed within five months, having lost $4m that year alone, and its contents were gradually sold off.

When Leif and Yvonne found an old video interview with Mandela recorded in the hotel, they tracked down the exact spot it was taken in – plants now growing out of the floor, its decorative wall laid bare. Outside, security guards were patrolling its various back entrances to fend off vandalism and illegal occupation. 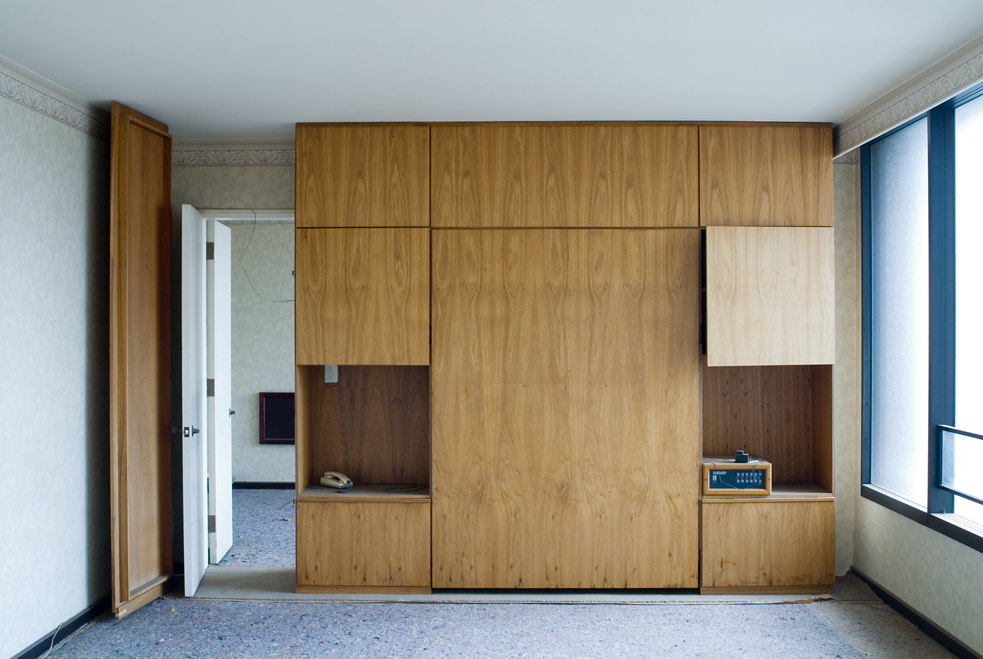 Capturing such contrasts seemed to provide a profound reflection, not just on what was once the southern hemisphere’s best hotel, but a symbol of of South Africa’s complex history.

“At its completion in the 1970s, the Carlton Hotel was deemed a liberal hub where petty apartheid laws managed to be eroded,” says Yvonne.

“On the other hand, it stands as a monument of financial gains made on the backs of the disenfranchised… It remains a stark reminder of international collusion to uphold, or turn a blind eye, to a broken system. 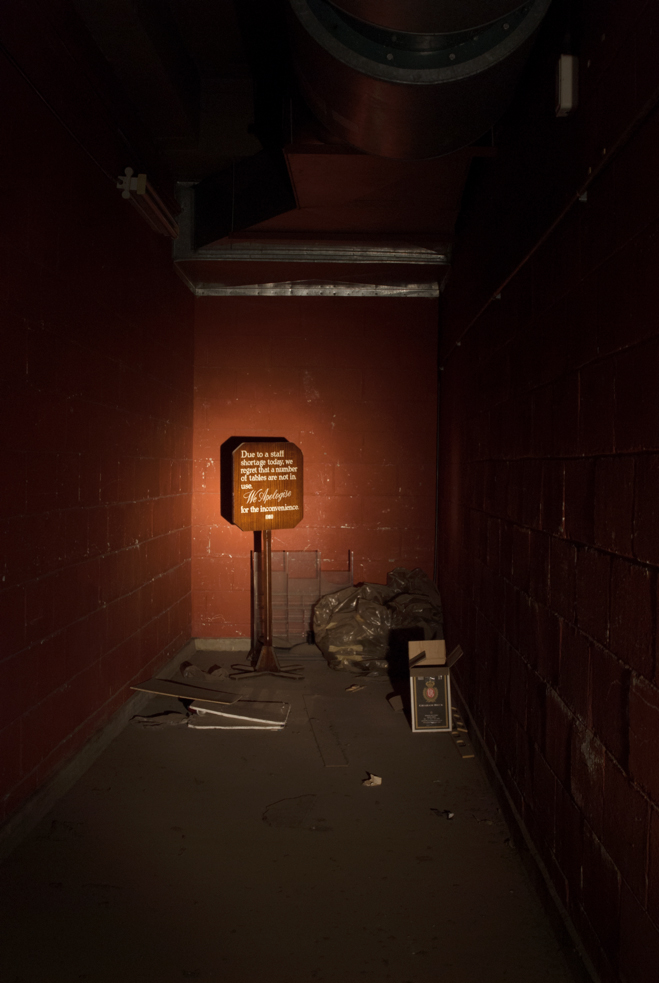 “South African society will likely have to live with this monument, as it looks expensive to topple, and so perhaps it will once again become symbolic when it has an opportunity to be transformed into something new.”

Inside the Carlton Hotel Johannesburg is published by Kehrer Verlag.

Linkedin
RELATED ARTICLES
OTHER ARTICLES
David 'Dee' Delgado’s photo project is about honouring and uplifting the city of his youth, and a world rapidly disappearing under the relentless onslaught of gentrification.
A new film from Berghaus traces the story of Adam Raja, who left behind a turbulent upbringing to discover the healing power of climbing.
After building his reputation covering the US civil rights movement in the 1960s, the photographer went on to produce some of the most enduring images of the past century.
The pro skateboarder withdrew from the 2020 Olympic Games so he could come out as trans. Now, he’s hoping to encourage others to live as their authentic selves – within the sport and beyond.
Activists and campaigners are fighting back against new laws that would seriously undermine the ability to take industrial action, calling it an attack on fundamental workers' rights.
After a two-year hiatus and a new album, the Nigerian artist is riding high. Now, he wants to bring his alternative, genre-bending sound to the world.