Art & Culture / Photography / The photographers who defined skate’s wild side 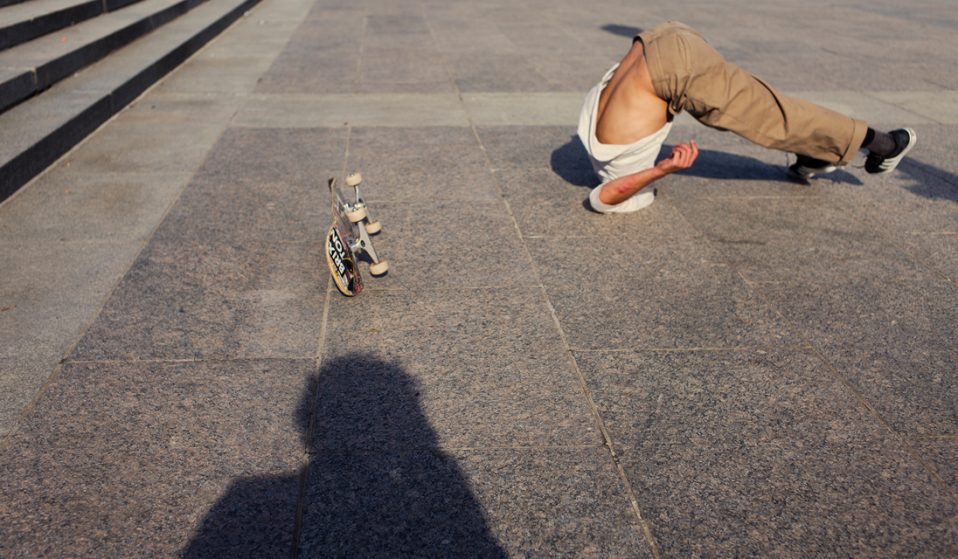 What it was like to witness skate history first-hand.

A new exhibition celebrating the legacy of skateboarding – as well as the photographers and filmmakers who've documented it – will travel the world over the next two years. Here, they recall what it was like to witness skate history first-hand.

In a small Soho basement, sticky with heat, a crowd of people shuffle from room to room, craning necks at work by some of the most influential names in skate photography.

It’s the launch night of Against the Grain, an exhibition that will travel the world over the next two years.

Curated and produced by Frankie Shea and Jaime Marie Davis, it chronicles era-defining moments in skate culture – both iconic and overlooked – spanning from the 1970s right up to present day. 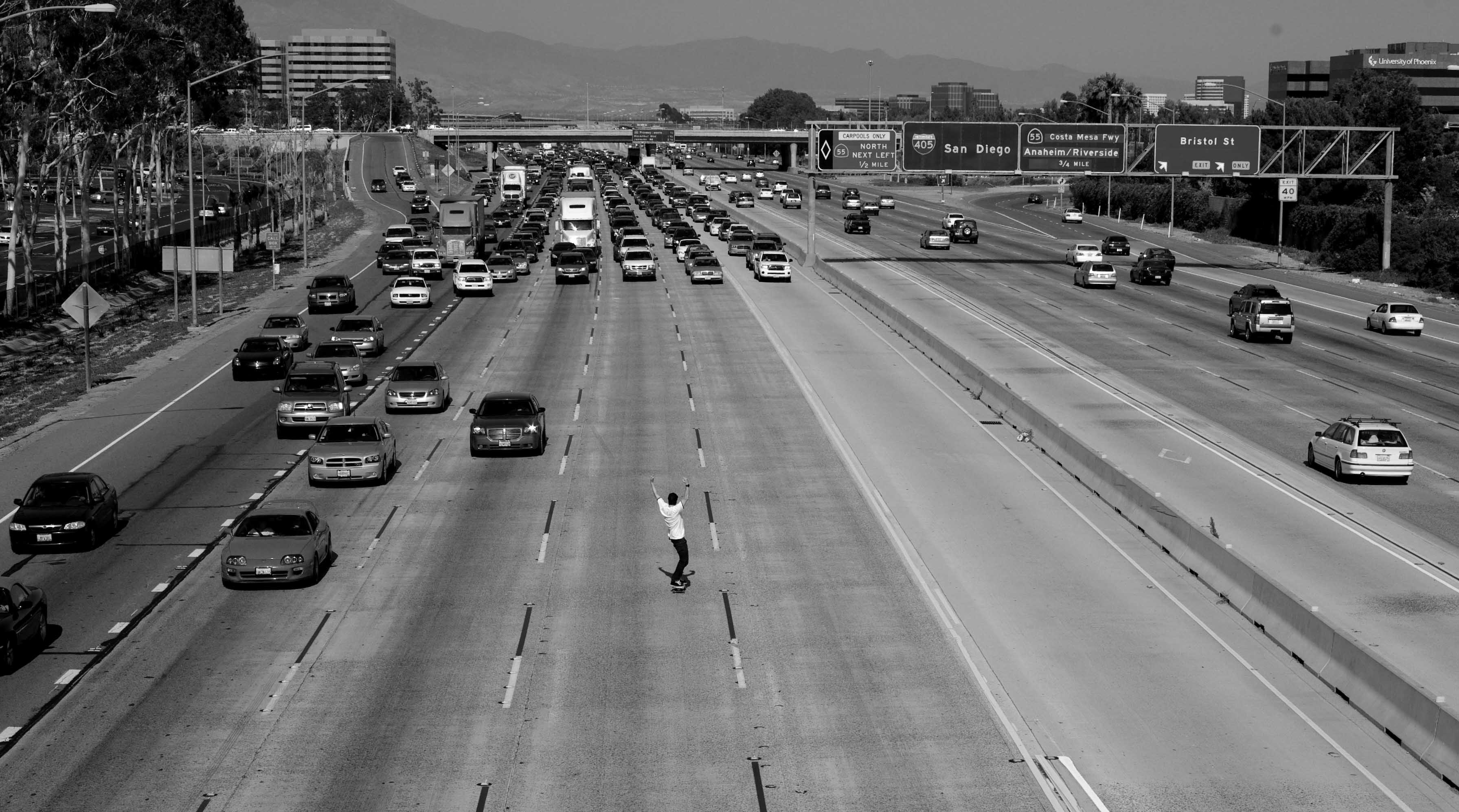 Spread across one wall is a black-and-white picture from which the show takes its name: a shot of Don Brown riding into oncoming traffic, on a California freeway, with two middle fingers extended in the air.

“I was shittin’ myself on a bridge, thinking we were gonna get busted,” says photographer Skin Phillips, then editor-in-chief of Transworld. Don wanted to pull of a publicity stunt for Go Skateboarding Day, a holiday he launched, and so a full shutdown of traffic had to be organised on a Friday afternoon, the busiest day of the week in Orange County.

“I didn’t even put my name on this photo for a long while,” adds Skin. Dressed in a chequered Palace GTX3 shirt, red baseball cap and shades, he towers over those around him, stooping to make eye contact. “I was on a visa at the time and didn’t have citizenship. Don, meanwhile, didn’t give a shit – but it was all quite sketchy.” 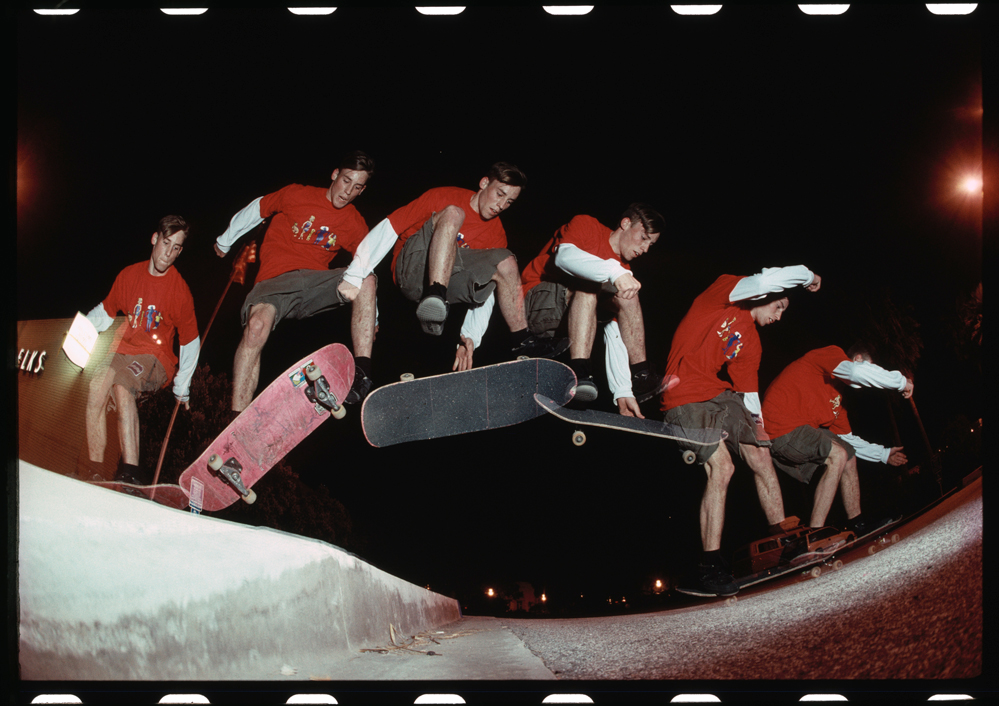 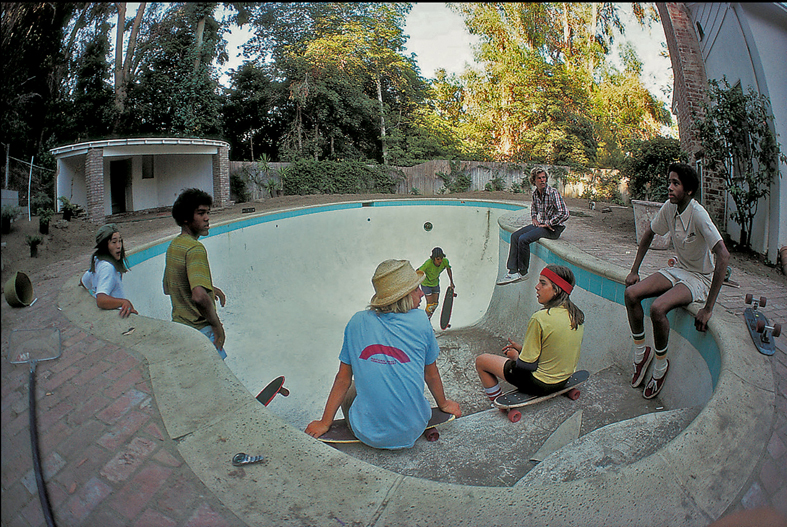 Not giving a shit is a recurring motif throughout the exhibition. You can find it in a Spike Jonze image of the Gonz toting a gun, in a Tobin Yelland shot of a skateboard crashing through a car window, in the well-worn and brashly designed zines that epitomised skate culture’s DIY mentality.

Far from presenting glossy postcards from sunny California, these works capture the grit of everyday skate heroes grinding away at what they love – something perfectly reflected in Wig Worland’s blown-up negative of a battered mini-ramp under a washing line – complete with clothes drying – in a Nottingham backyard the size of a box room. 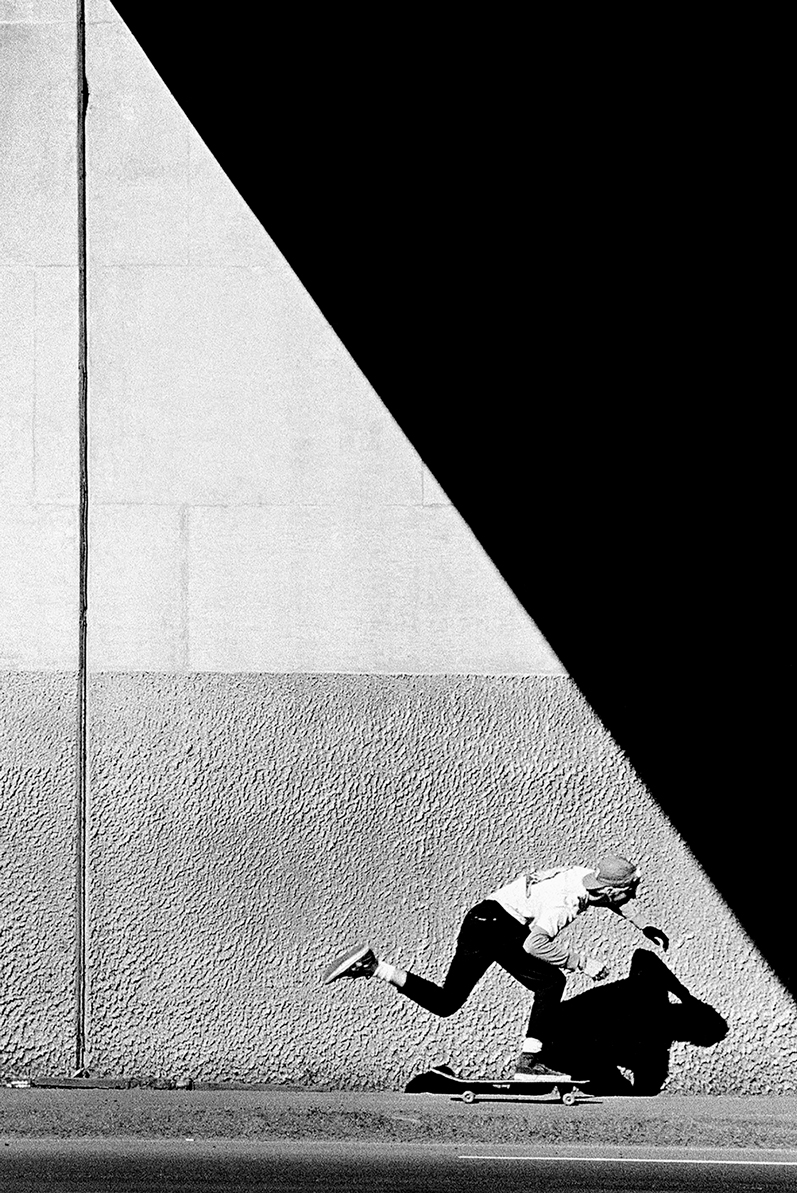 Photographer and musician Dobie Campbell – a hulk of a man dressed in baggy shorts, a shirt and a flat cap, all shades of pale blue – documented the evolution of Britain’s skate and breakdancing scenes throughout the 1980s and ’90s.

The side of his work represented here focuses on the ‘Palace Originals’, a crew that came together around the ramp built in South London’s Crystal Palace – where Dobie is from himself – featuring UK innovators like Lucian Hendricks, Danny Webster and Steve Douglas. 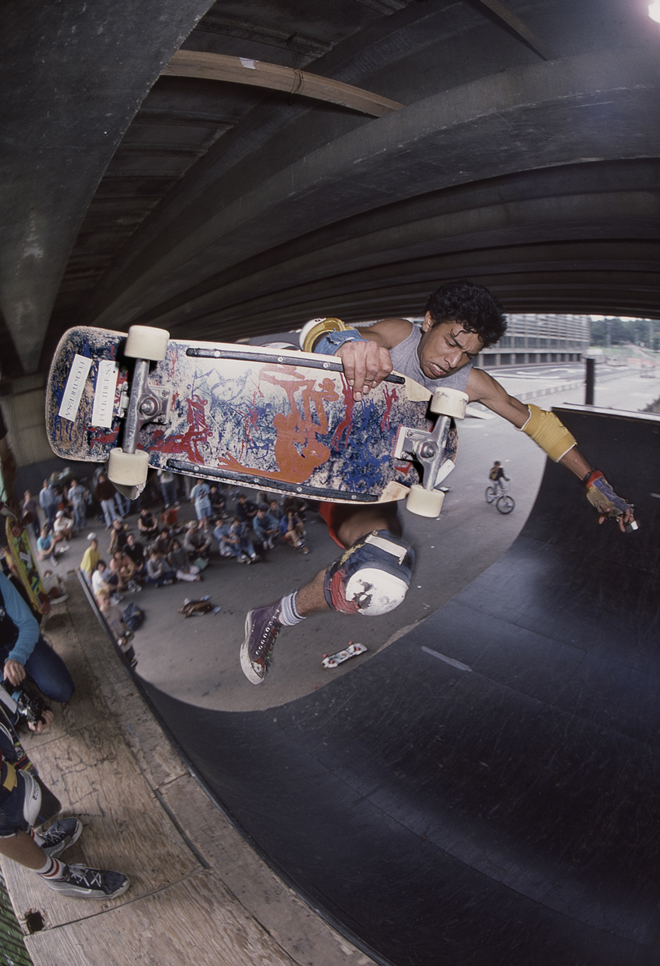 “When skateboards first landed here in the mid-to-late ’70s, there was a massive boom – everyone was skating – then it just died off,” he says. “At one point there couldn’t have been more than 200, maybe 300 skateboarders through the whole UK. We were lucky to be part of that crew and I mean that because we just loved skateboarding so much that we never stopped.

“Sometimes we’d get a load of jip from other people – ‘Oh, what you doin’ that for? It’s gone with the dinosaurs’ – but if anything, that made us want to skate even more. Now look at it. It’s in the X Games, in the Olympics; you see people who dress like skaters and they don’t even skate.”

He laughs, wiping the sweat from his brow as others squeeze past, soaking up the exhibition. The people in Dobie’s photos, he says, remain close friends. They’ve become grown men with families, still hanging out with each other, even laying people to rest together. There are few bonds like that in life, he adds, but looking around the exhibition it feels like the power of skate culture still resonates for the same reasons it did back then. 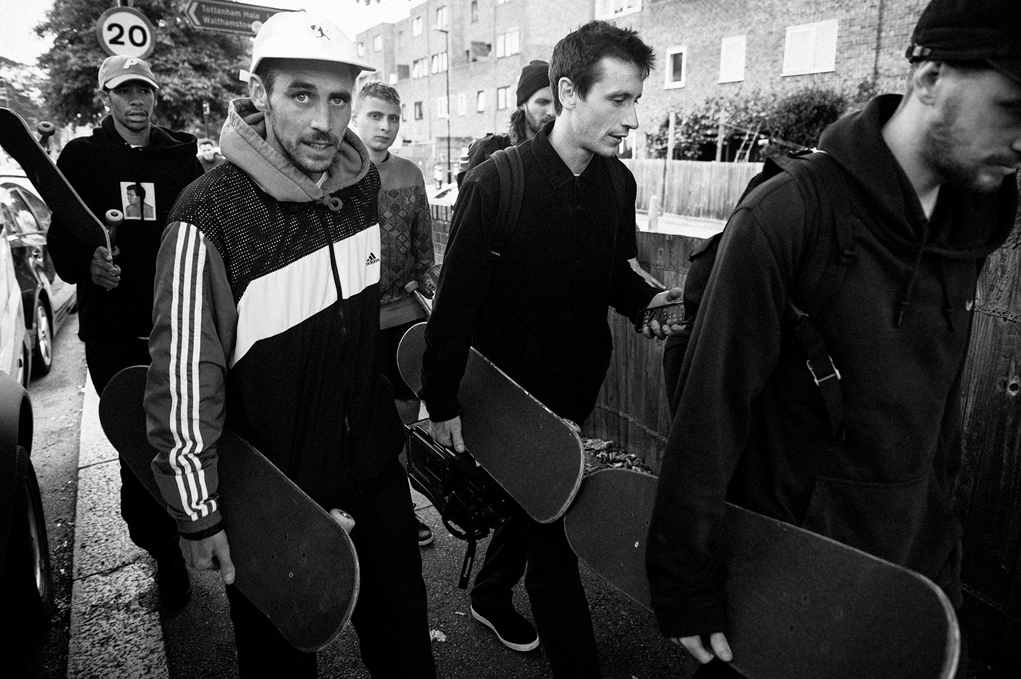 “But it’s come back around in a good way. It’s here to stay, it’s been accepted as this beautiful little subculture with a very tight community. Skating is inclusive, not exclusive. I think that’s what draws people to it: they can come in and just be themselves.”

Follow the creaky floorboards to another room back upstairs and you’ll find a looping retrospective from filmmaker Spike Jonze, which includes his playful intro to Girls Skateboards’ Mouse video. Just beyond that, an enormous sheet of paper details the chronology of surf and skate culture, from 3000 BC to 1998, as documented by CR Stecyk III. 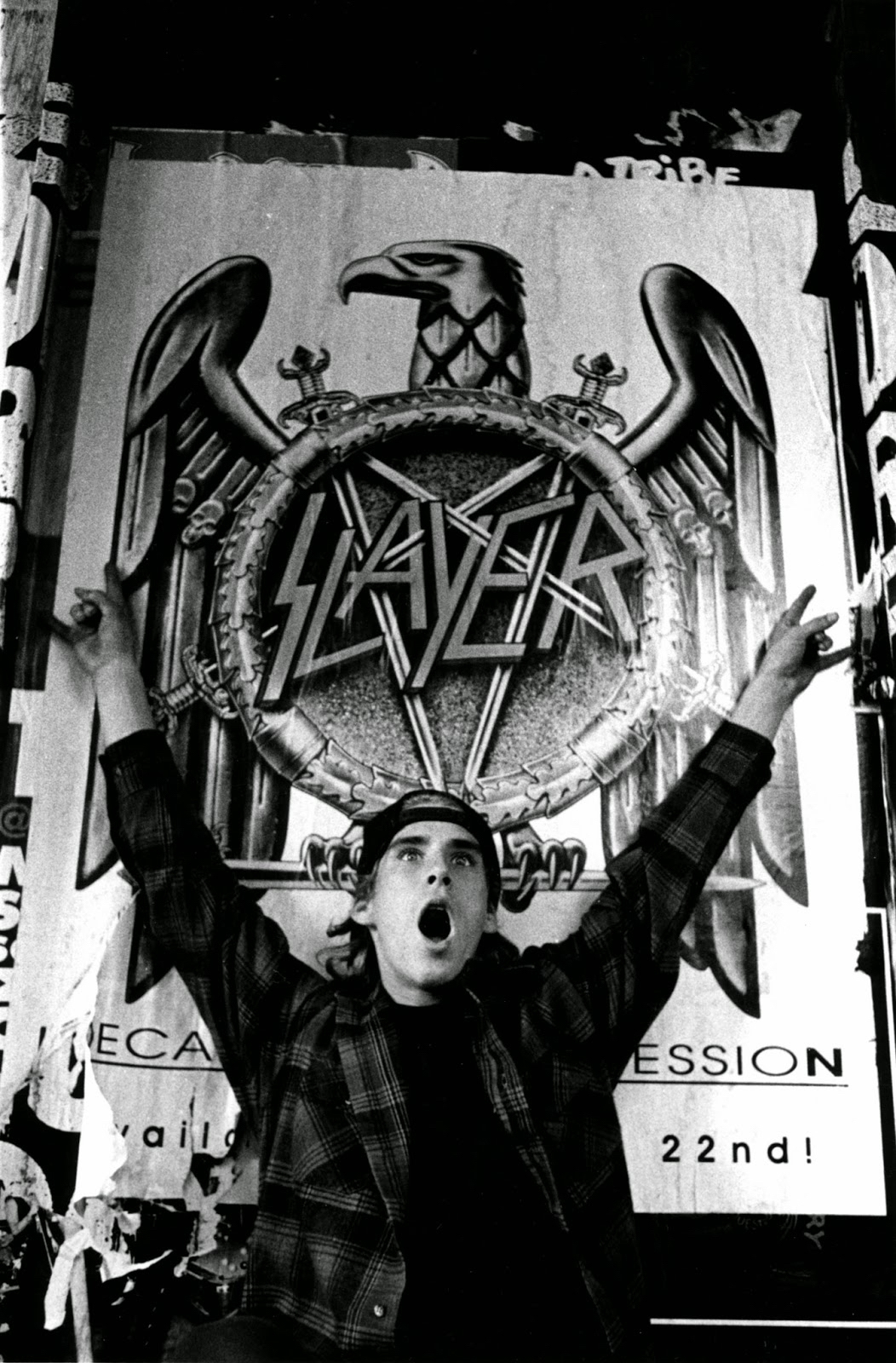 In a cramped room in-between, a carousel of slides are projected, one by one, against a wall – each an original darkroom test-print made for Sidewalk magazine by Wig Worland between 1995 and 2005.

Wig – a tall, straight-talking character who’s sheepish about revealing much on record – admits that it’s a special feeling to see these various moments in time, seized by friends and heroes, assembled together in one collection.

“Skate culture is always changing, isn’t it? But then again there’s always something about it that remains the same: a sense of mayhem, which I tried to keep out of my pictures and was never terribly successful at.” 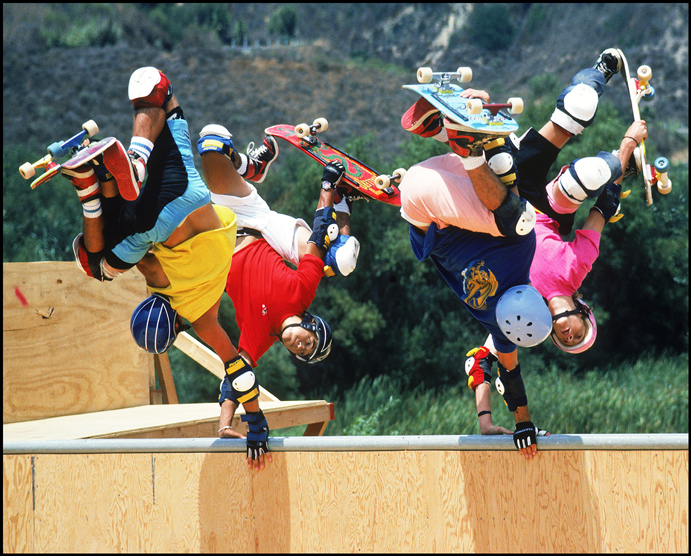 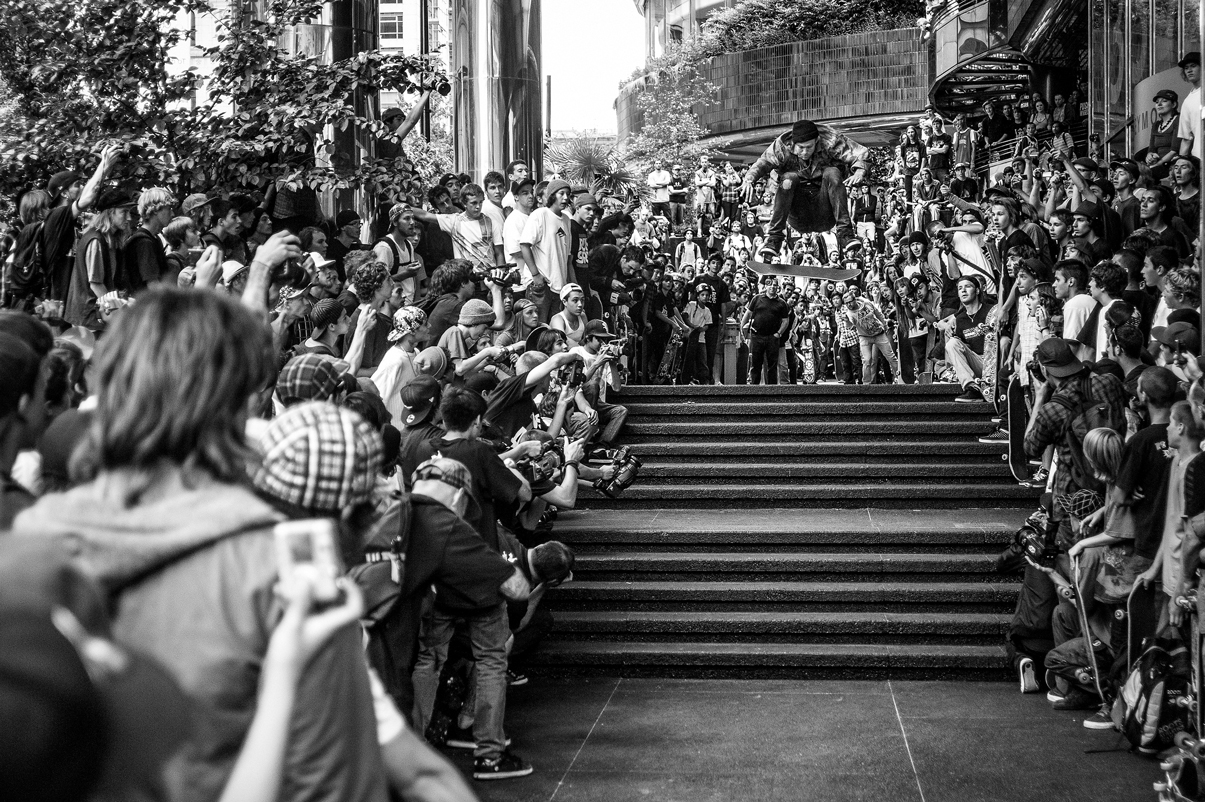 “At the time I was just producing pictures to use in a magazine… Obviously you can see the significance of it now but it’s really hard to be aware of that when you’re doing it.”

It’s a sentiment echoed by Skin Phillips, who now marvels at the work from a different perspective. Whether by design or serendipity, these photographers managed to shine a light on a different side to skateboarding: a gnarly, raw power fuelled by camaraderie.

“You just document day by day, never thinking of the future, never thinking a photo will get old – because you always want to be new, to be first,” he says, shaking his head for emphasis. 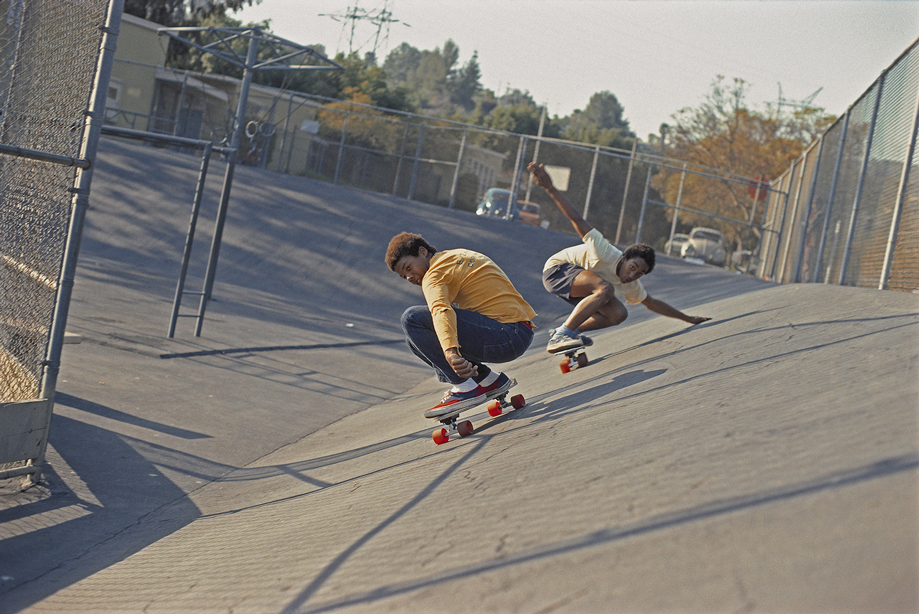 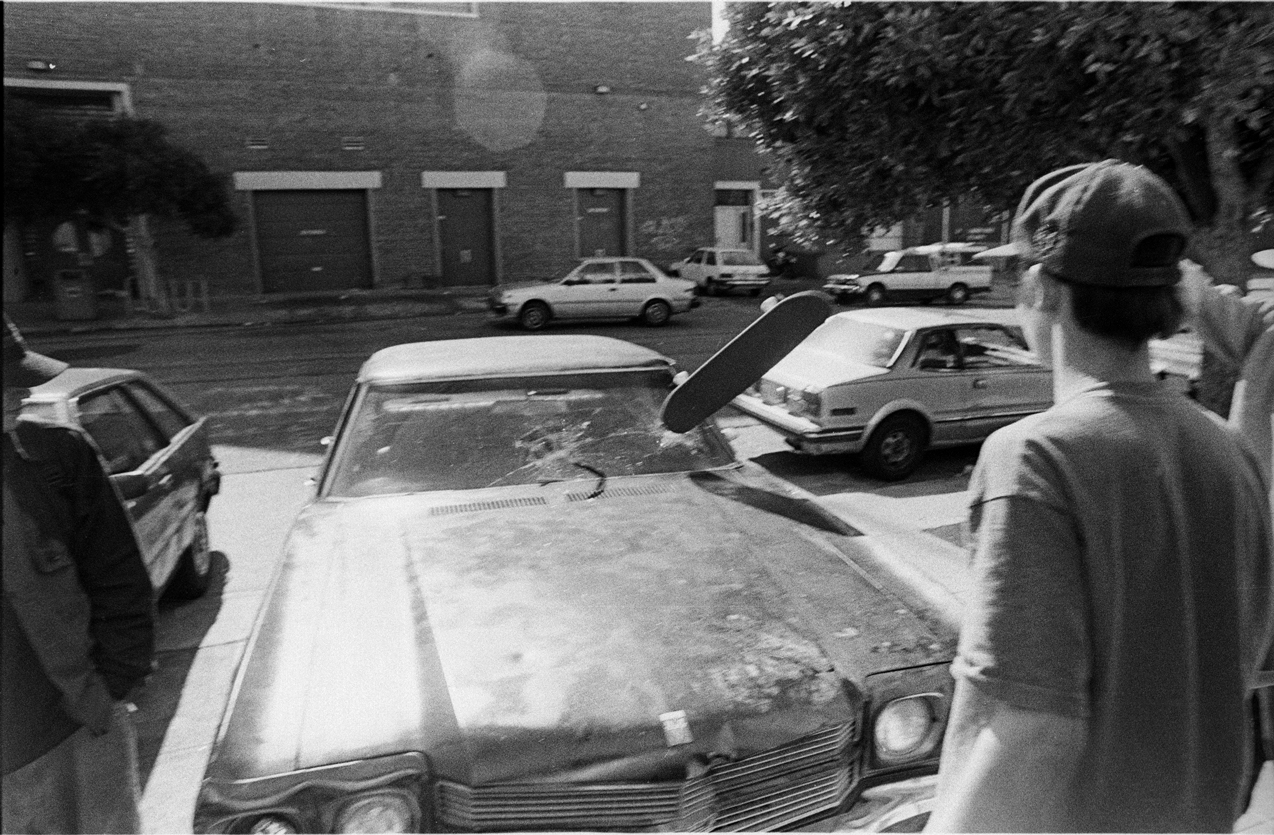 “All that time we spent thinking it was about tricks, it kind of wasn’t about that at all – it was what we were documenting.

“I never did portraits until I worked at a magazine and I was commissioned to. But in hindsight, I should have been shooting everyone since day one. Nobody has portraits of Tom Penny when he was a kid. Everyone was just shooting him skating.

“But documenting the lifestyle side of it has proved so important… You might look at all the photos here and think it’s about skateboarding, but it’s about the feeling you get from it.”

Against the Grain: Skate Culture and the Camera runs until 22 July at 15 Bateman Street, Soho, London.

Linkedin
RELATED ARTICLES
OTHER ARTICLES
Writers Gracie Mae Bradley and Luke de Noronha take on the callousness of borders, arguing for a world beyond them.
A new report has found that the majority of Britains approach trans issues with compassion. It’s about time this was reflected by our media landscape.
Photographer Arthur Grace recalls travelling through the Soviet Bloc and finding ways to evade the surveillance of his work.
On the fifth anniversary of the tower fire, around 18,000 joined the walk to remember the 72 dead and to demand justice.
The curators of a new exhibition are hoping to shed light on Plymouth’s vibrant but often overlooked nightlife.
Over the years, a swimming hole in a city park has evolved into a magnetic meeting place for Philadelphians – a hideaway where people can connect with the natural landscape, and each other.