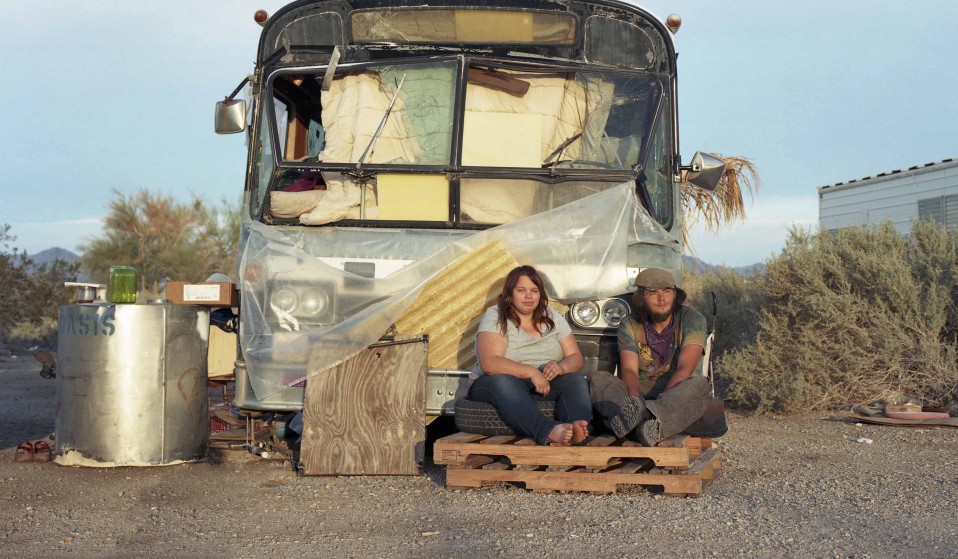 Tucked away between the Sunshine state’s remote military zones, Slab City has become an unlikely home for nomads, drifters and addicts who have been left behind by American society. In a new project, photographer Laura Henno offers a fresh perspective on the community’s everyday reality.

Tucked away between the Sunshine state’s remote military zones, Slab City has become an unlikely home for nomads, drifters and addicts who have been left behind by American society. In a new project, photographer Laura Henno offers a fresh perspective on the community’s everyday reality.

Just 153 miles of San Diego, there’s a large sprawling encampment, fashioned from the rusting vehicles and the dusty detritus of the Sonoran Desert. Slab City, as its affectionately known, appears something out of an apocalyptic Mad Max film set. “It’s a place always balancing between heaven and hell,” says the photographer and film-maker, Laura Henno, who began documenting the site and its denizens, last year.

Henno, whose work centres on the groups who have been marginalised in society, will be showcasing her ongoing project, Outremonde (Underworld) at Les Rencontres d’Arles. Consisting of a photographic series and a short film, the project takes its name from a Don DeLillo novel, wherein America’s buried ‘trash’ – both figuratively and physically – refuses to remain repressed and erupts from the collective consciousness.

While it’s not intended as a representation, Henno’s project is a ‘citation’ of the book. “The name reflects the strange world Slab City is,” says Henno, “It really is a parallel world.” 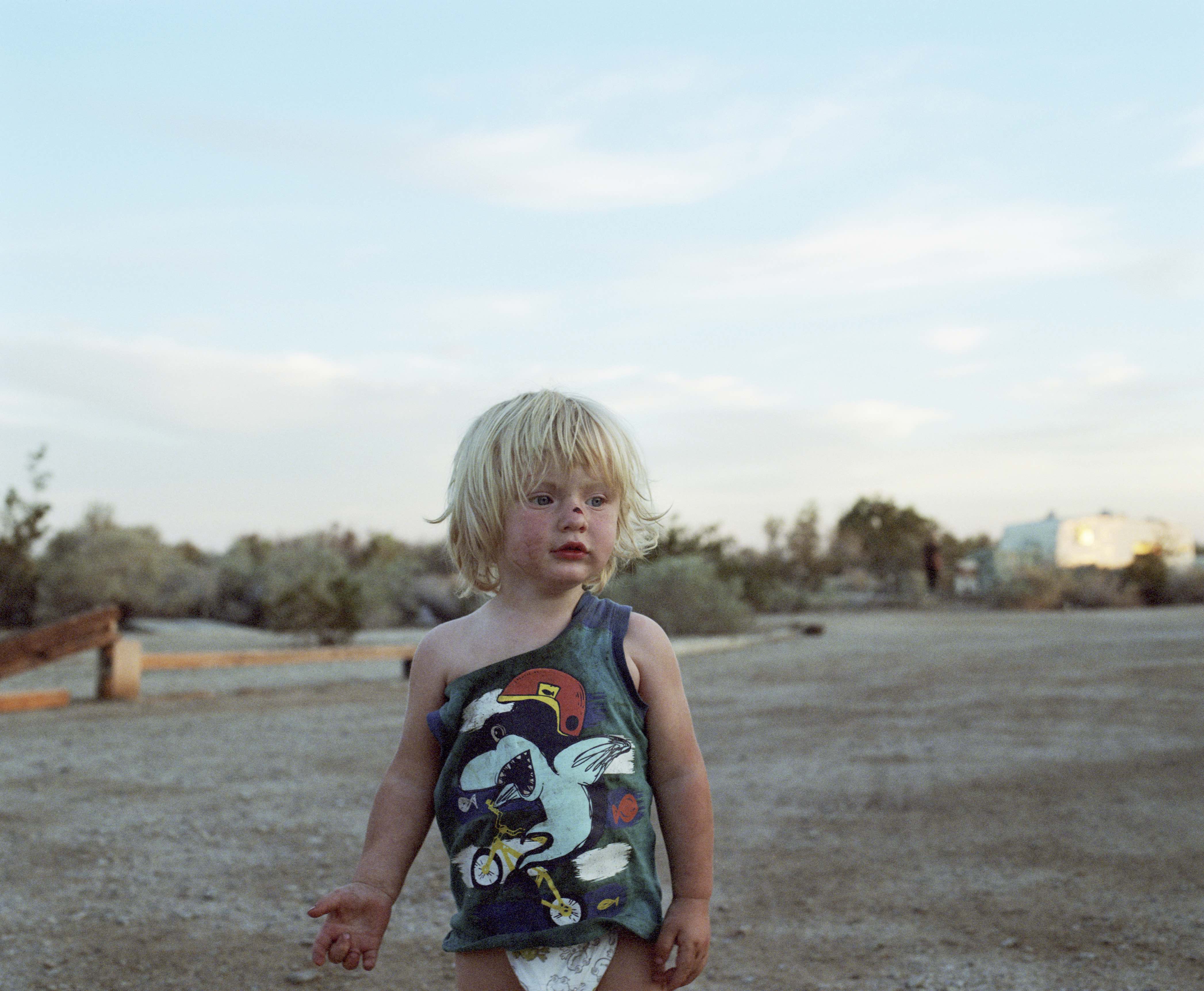 The last remaining free US territory, Slab City was set up on the decommissioned base of Camp Dunlap, a former World War II barracks. While it was dismantled in 1956, a faction of soldiers stayed. Since then, it’s become a mecca for anarchists, nomadic snowbirds in plush caravans, drifters, the desperately poor, and addicts; each with different reasons to live off-grid, but almost all of whom are unable to afford the rising costs of modern-day America.

“There are so many bad stories about Slab,” Henno says, “There is a lot of visual violence: burnt trailers, garbage, abandoned junk. You’re between [active] military zones, so every day there is the sound of gunfire. It’s extremely hot, and you have no water or electricity. There is nothing.”

Despite it all, Henno points out: “We were supposed to spend three weeks there… We ended up staying two months.” 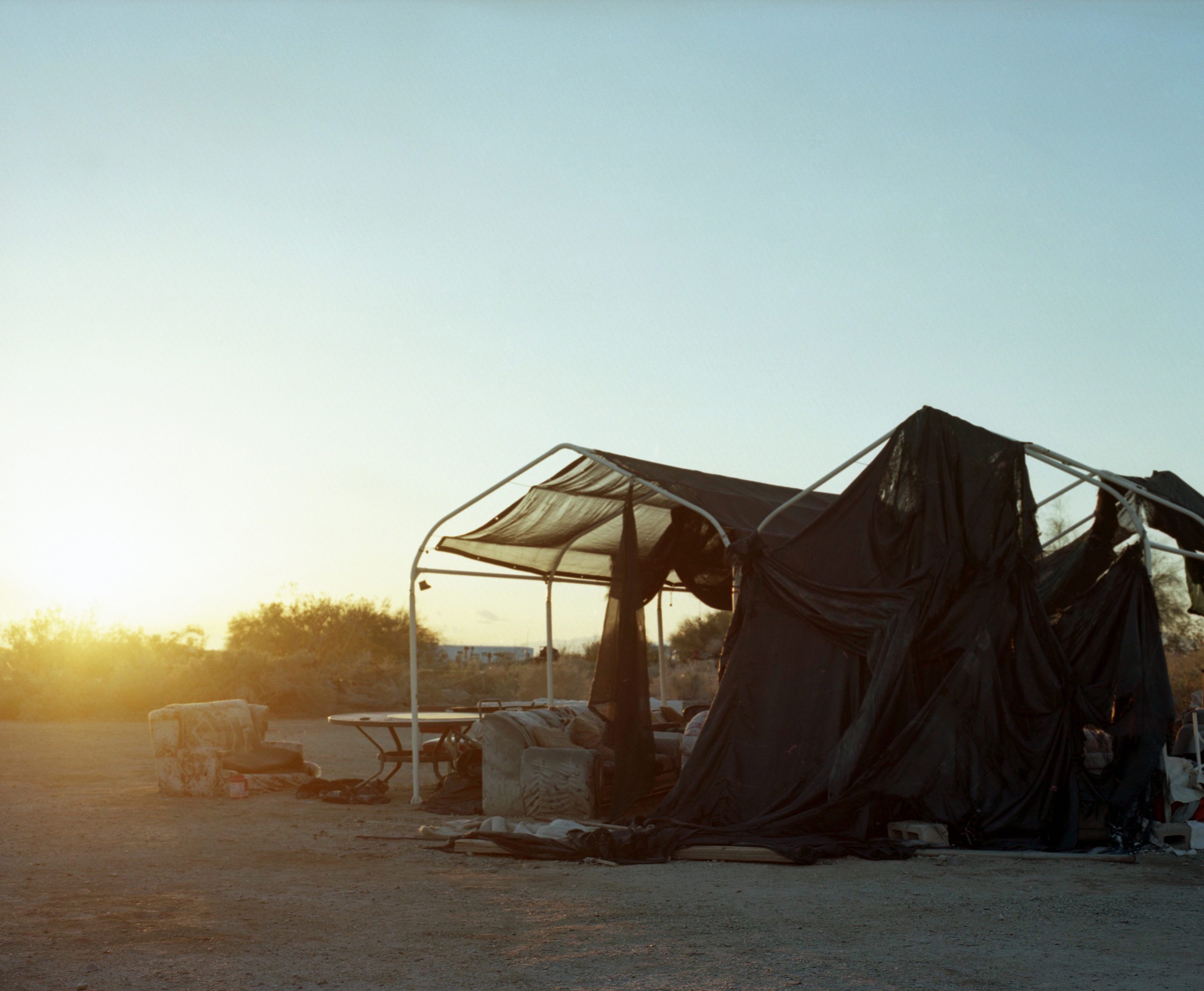 “The main media representation of Slab City is this apocalyptic world, with all these ‘creepy’ people, and drug addicts,” continues Henno. “That’s why I wanted to focus on its other side.”

Instead of aestheticising misery, Henno decided to focus on daily life: youth catching the school bus, a church service led by Pastor Dave, every inch the croaky rock-star when he bursts into hymn, and a young evangelist, Nicholas, excitedly watering seedlings in a shared vegetable garden. “I was more interested in the community: love and good feelings that occur in Slab,” she says.

Through her gentle, quiet, documentation, Henno’s project follows a band of endearing characters surviving in their wild, barren surroundings. Just as Slab City offers a place for societal outcasts, Henno’s work creates space for people outside of the stereotypes they are often labelled with.

“I’m interested in the fractures found in society,” says Henno. “It’s important to think about inequality and why we can’t go wherever we want. For me, [the camera] is a way to change perceptions of people, to better understand the world we live in and understand why we have created a system that leaves people out of it.” 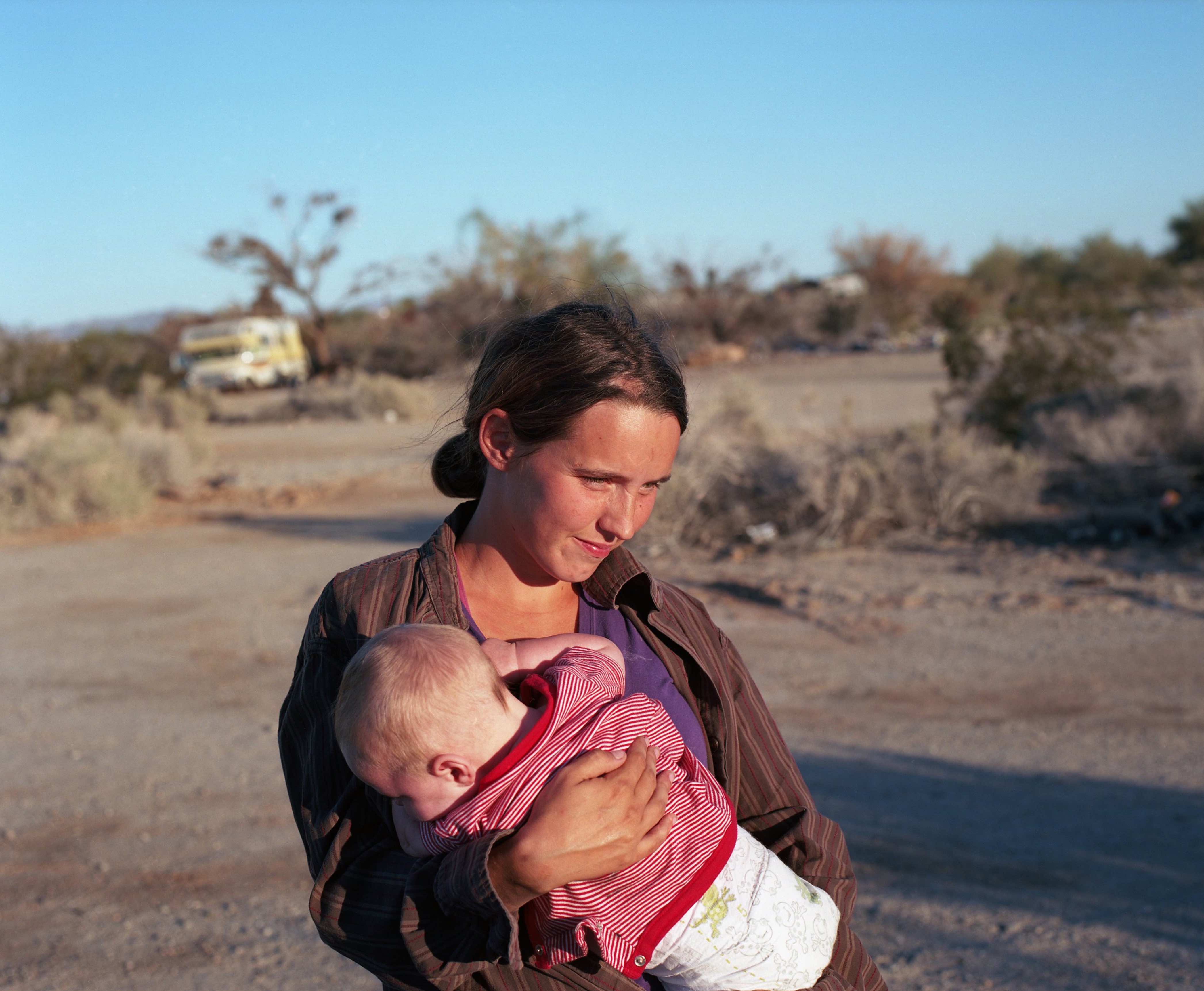 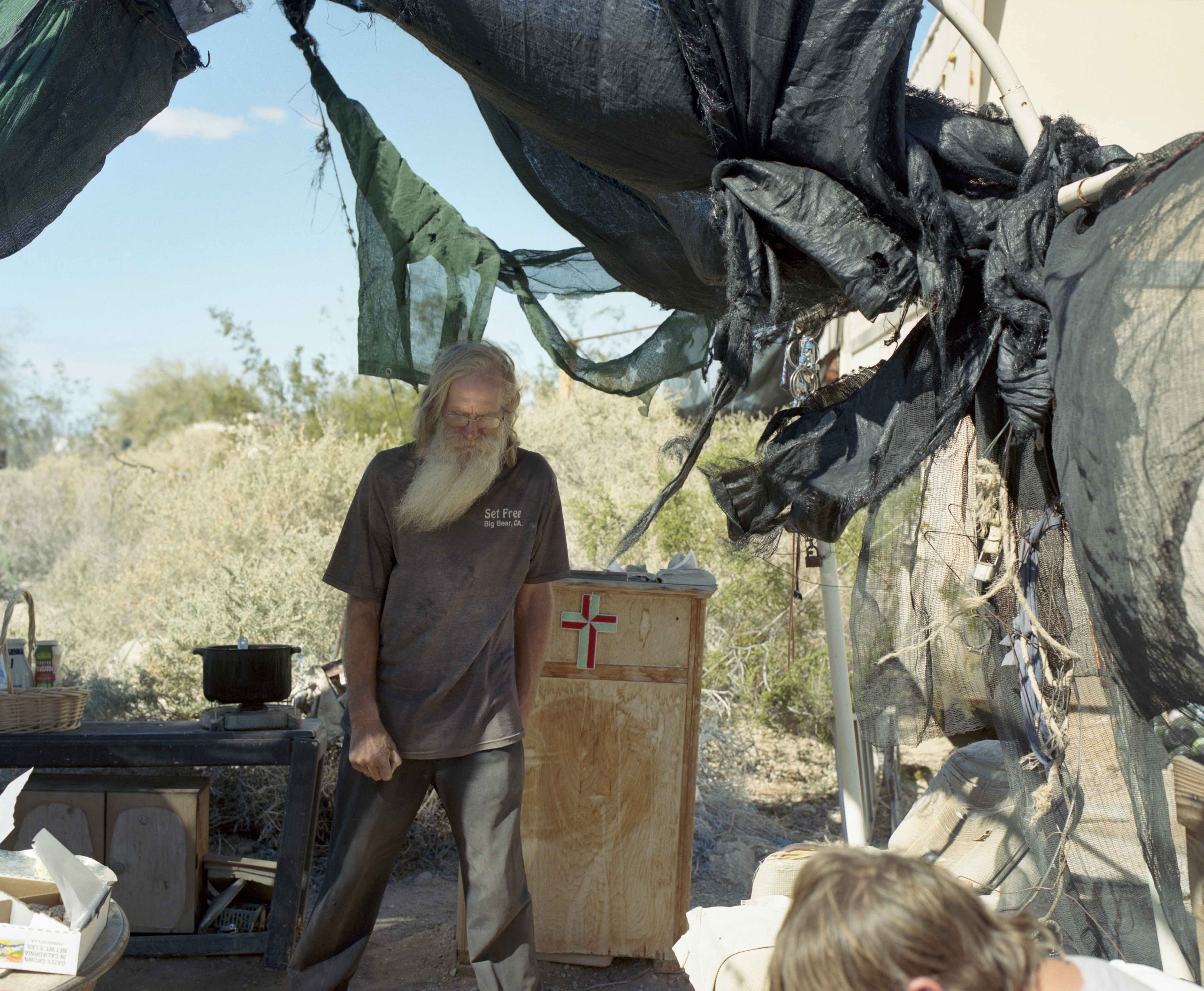 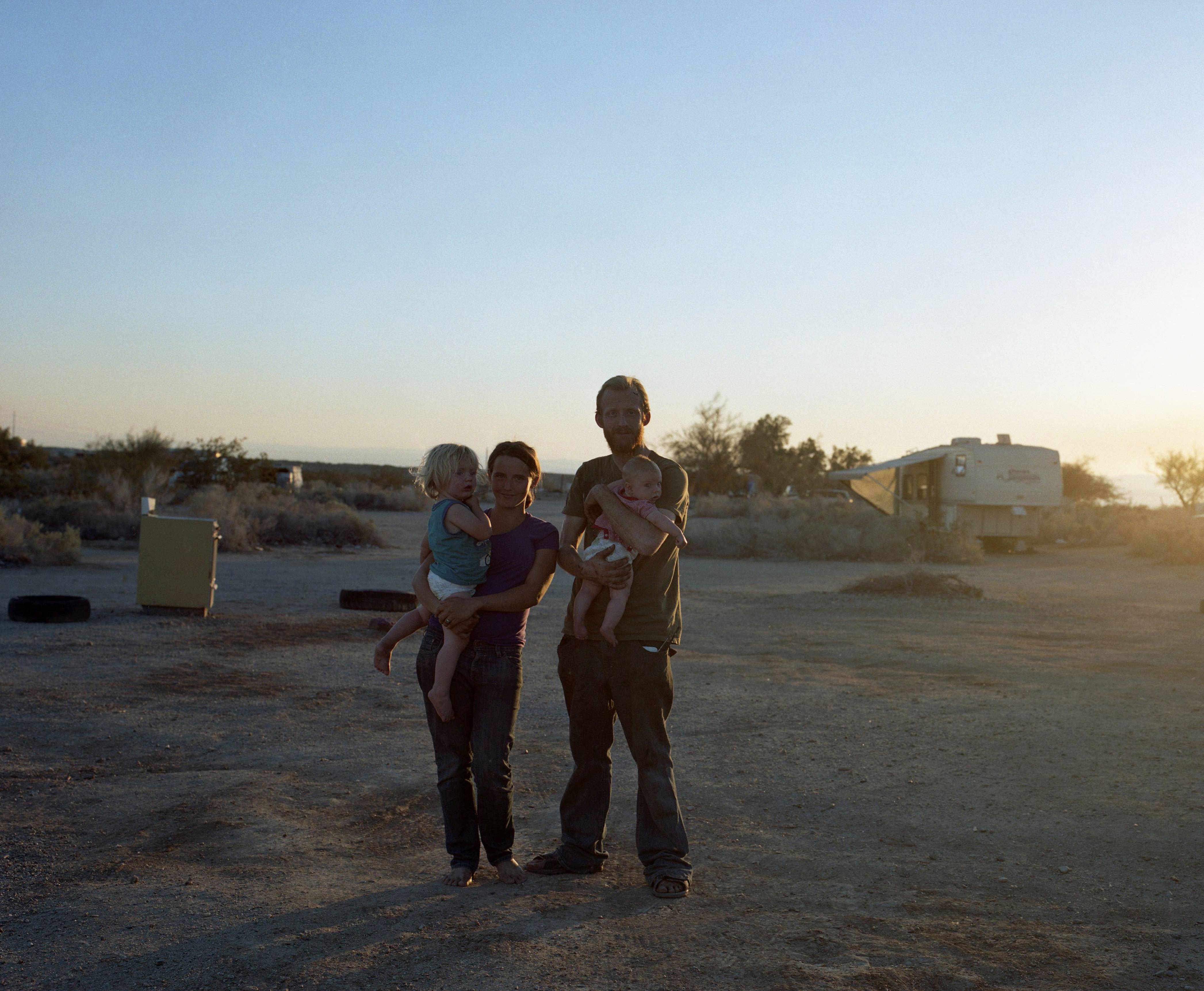 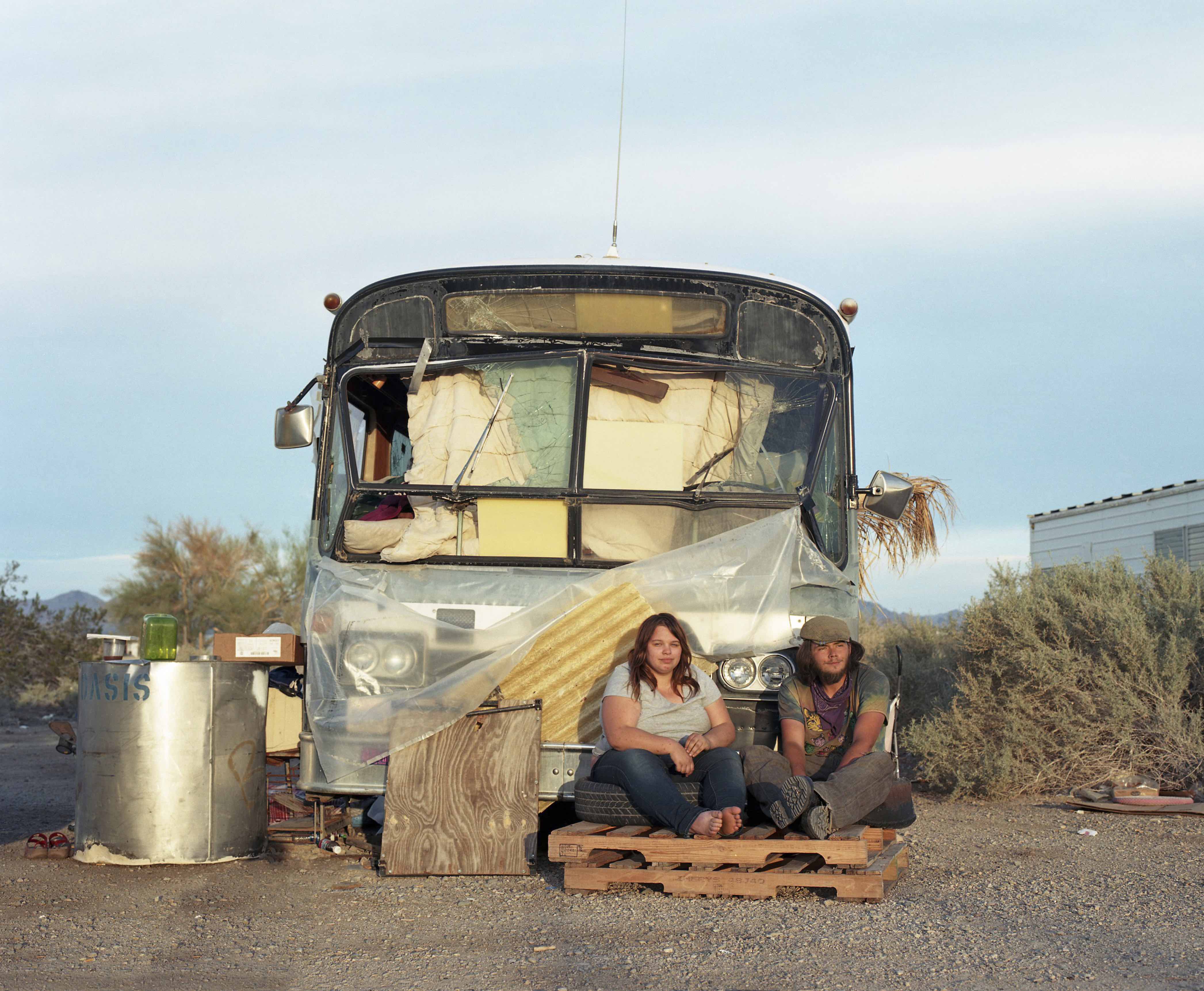 Linkedin
RELATED ARTICLES
OTHER ARTICLES
For decades, an area of East London has served as a community hub for Vietnamese people looking for a taste of home.
Curator Antoine de Beaupré discusses his immense record collection and what it tells us about the intersection of music, photography, art, and commerce.
A new edition of a seminal book brings together iconic images of the band onstage in their full glory and backstage in moments of unguarded camaraderie.
LGBTQ+ students are keeping the spirit of the original Pride alive by fighting for liberation for everyone, not just their community.
Wealth inequality and the rising cost of socialising is placing a strain on people’s relationships, reports Eve Upton-Clark.
Photographer Matthew Brookes recalls following a group of young people in Venice Beach living in search of the perfect wave.