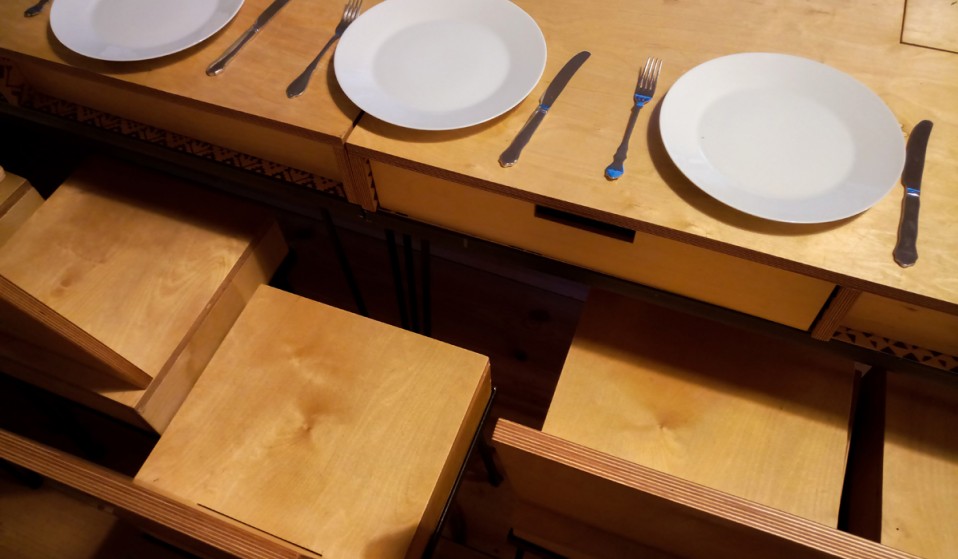 Photographer Grey Hutton spends time with an organisation bringing people together through cooking – and finds himself welcomed into the fold.

Berlin-based photographer Grey Hutton has been searching for answers to the refugee crisis since 2011. But it was around a kitchen table that he started to see people get a true taste of home – and found himself offered a seat in the process.

Yusuf sits at a long wooden table in an open kitchen, delicately slicing beef into a bowl, in a quiet corner of Berlin’s Schöneberg neighbourhood. He has crossed the largest desert on the planet and braved the treacherous Mediterranean crossing by boat to get here.

Now, along with his friend Zaki, he’s preparing a dish from Somalia for Iftar – the meal traditionally eaten at the end of each fasting day during Ramadan. 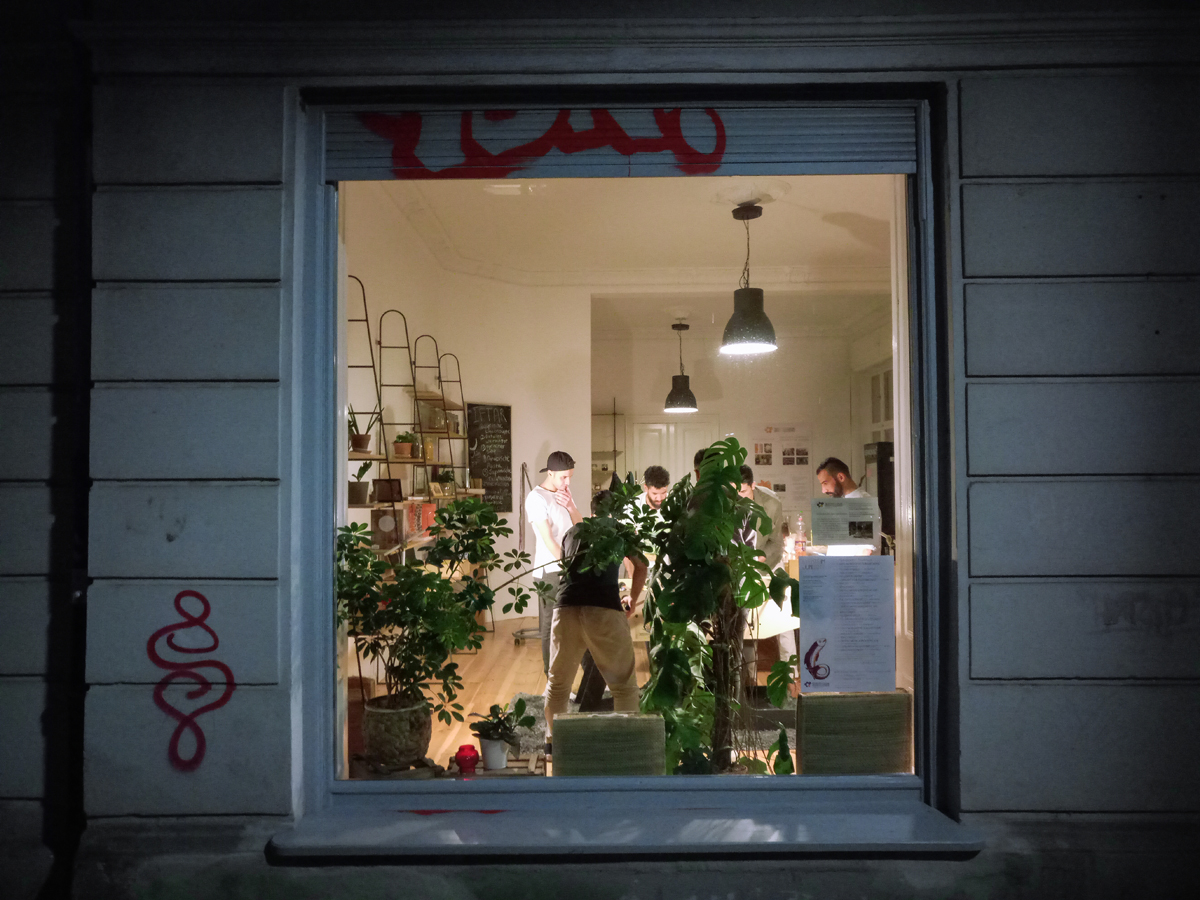 This is the KitchenHub of Über den Tellerrand, and Yusuf, whose been living in Germany since November 2015, is one of many people who pass through its doors.

Started in 2013 by Berlin locals Rafael Strasser and Lisa Thaens, Über den Tellerrand brings people together through communal activities, primarily cooking, with the aim of promoting an inclusive society. They call it “meeting at eye level”.

Here, through activities ranging from catering to football and even bee-keeping – refugees and locals alike have the opportunity to cook and play together, share recipes, forge friendships and set a shining example of integration without patronisation. 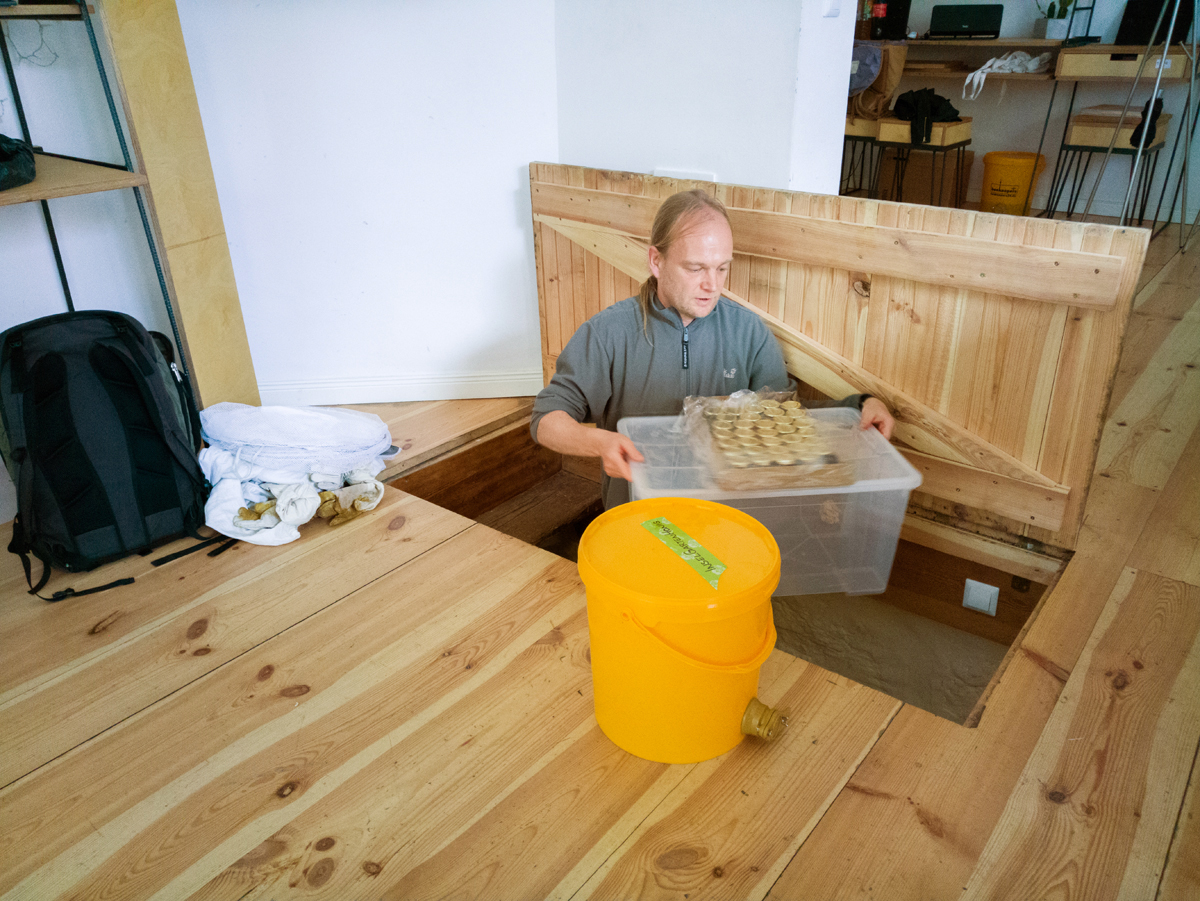 Karsten stores away the latest batch of honey from the estimated 60,000 bees they keep in the city.

In 2015 alone, Germany took in around a million refugees and migrants. The number of people seeking asylum has dramatically dropped in the last 2 years.

But the country is still dealing with a backlog of applications, a lack of housing facilities, insufficient integration programs and a resurgence in far-right and anti-immigration rhetoric. 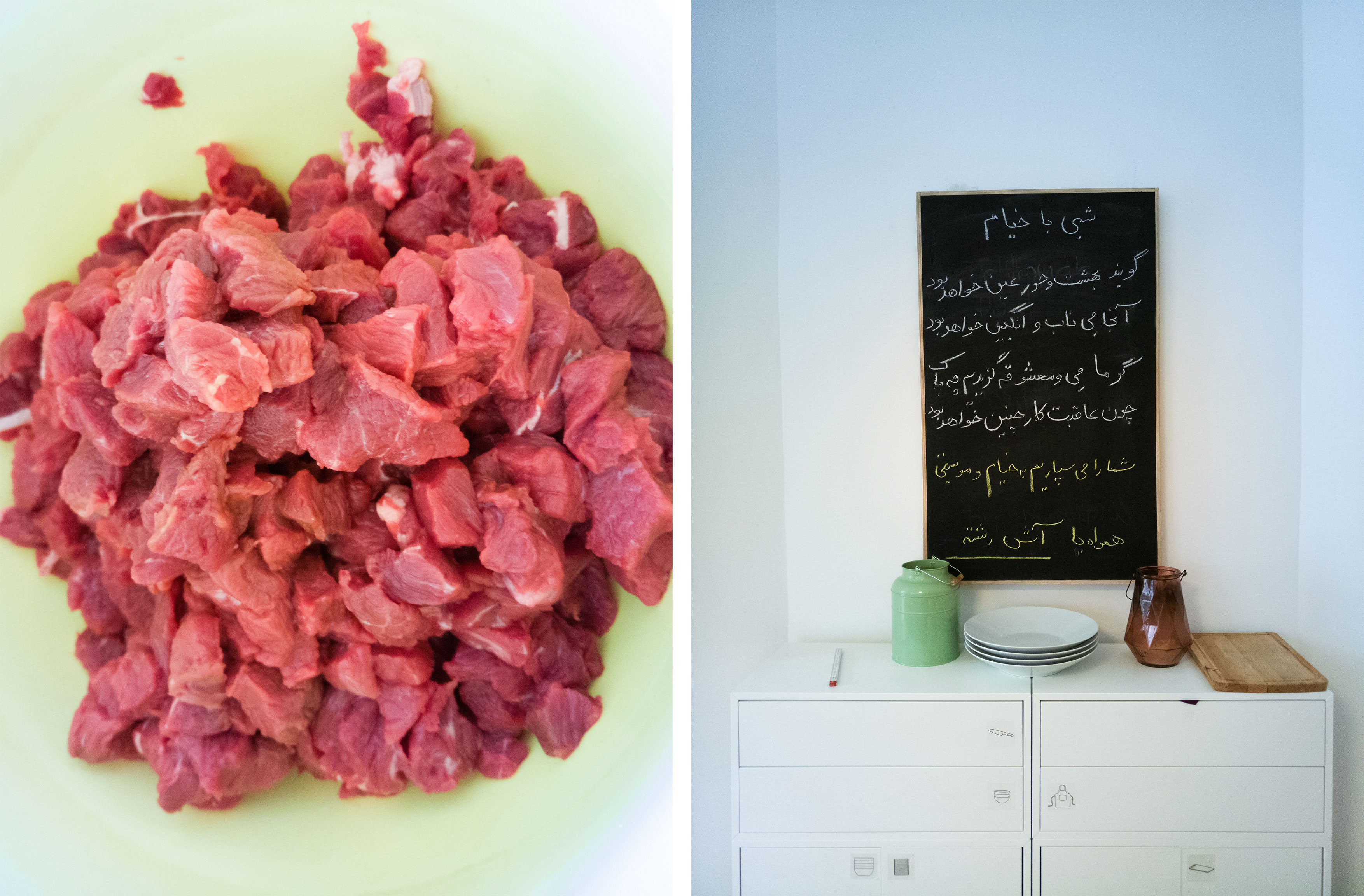 As a professional photographer I have been covering the refugee crisis in Berlin since 2011 when I slept overnight with a group of refugees initiating a hunger strike at the Brandenburg Gate.

While the landscape has changed and the numbers have risen, I have been deeply moved time and again by the generosity and affection that so many Berliners have consistently shown towards those seeking refuge in their city. 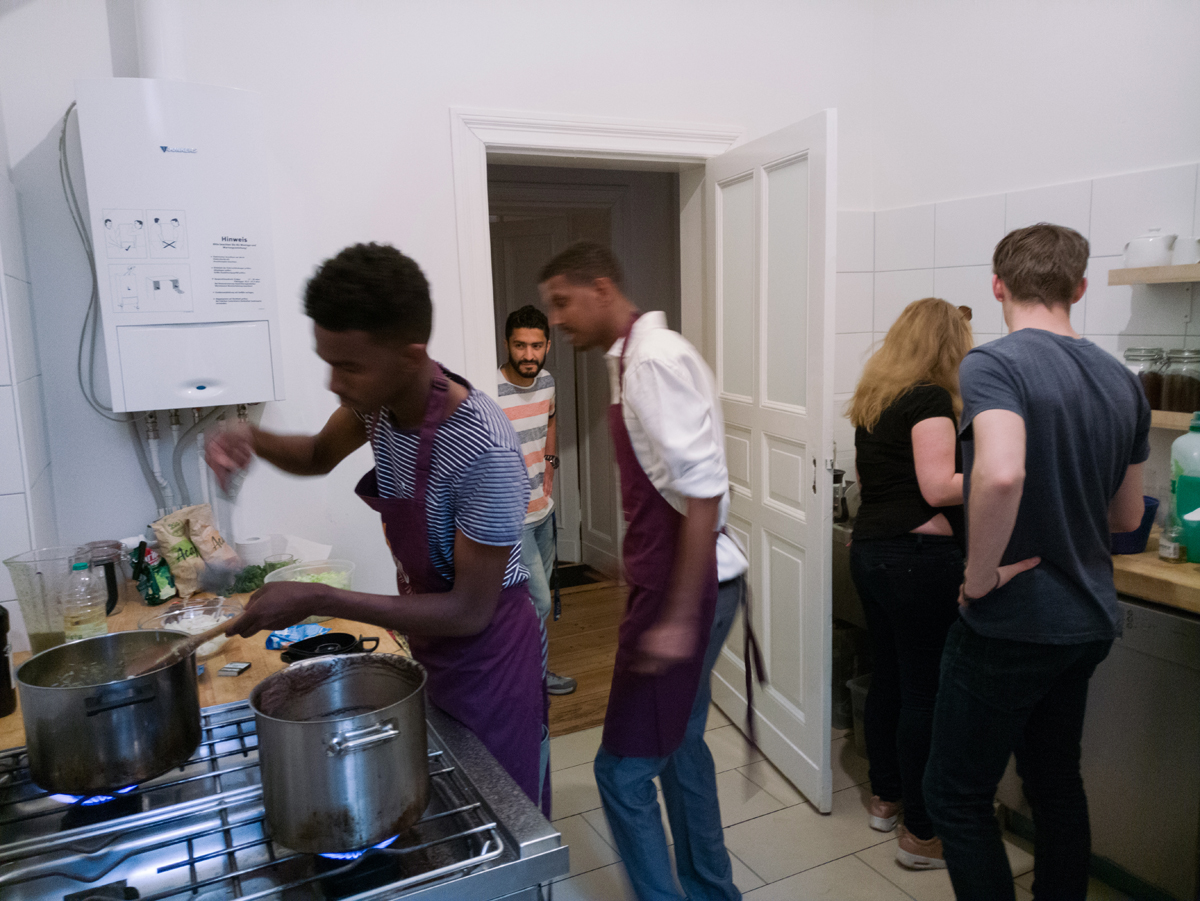 Zaki and Yusuf cooking up a storm.

Tonight it’s a table football competition that has drawn the crowd to the KitchenHub. Organised by volunteers Katja and Timur, it’s an opportunity for a slightly different group of refugees to experience the project.

“We wanted to bring in the football players, who aren’t necessarily connected to our cooking, to experience the food and enjoy a different type of football.” Katja explains.

Players begin to trickle through the door after 7pm and I can see some weary-looking faces collecting around the vast kitchen table at the centre of the room. Most of the congregation have entered their 17th hour of fasting for the day.

“We fast for 19 hours a day, we don’t drink, we don’t even swallow our spit. It’s so hard!” Yusuf exclaims as he moves onto slicing a German staple – potatoes. 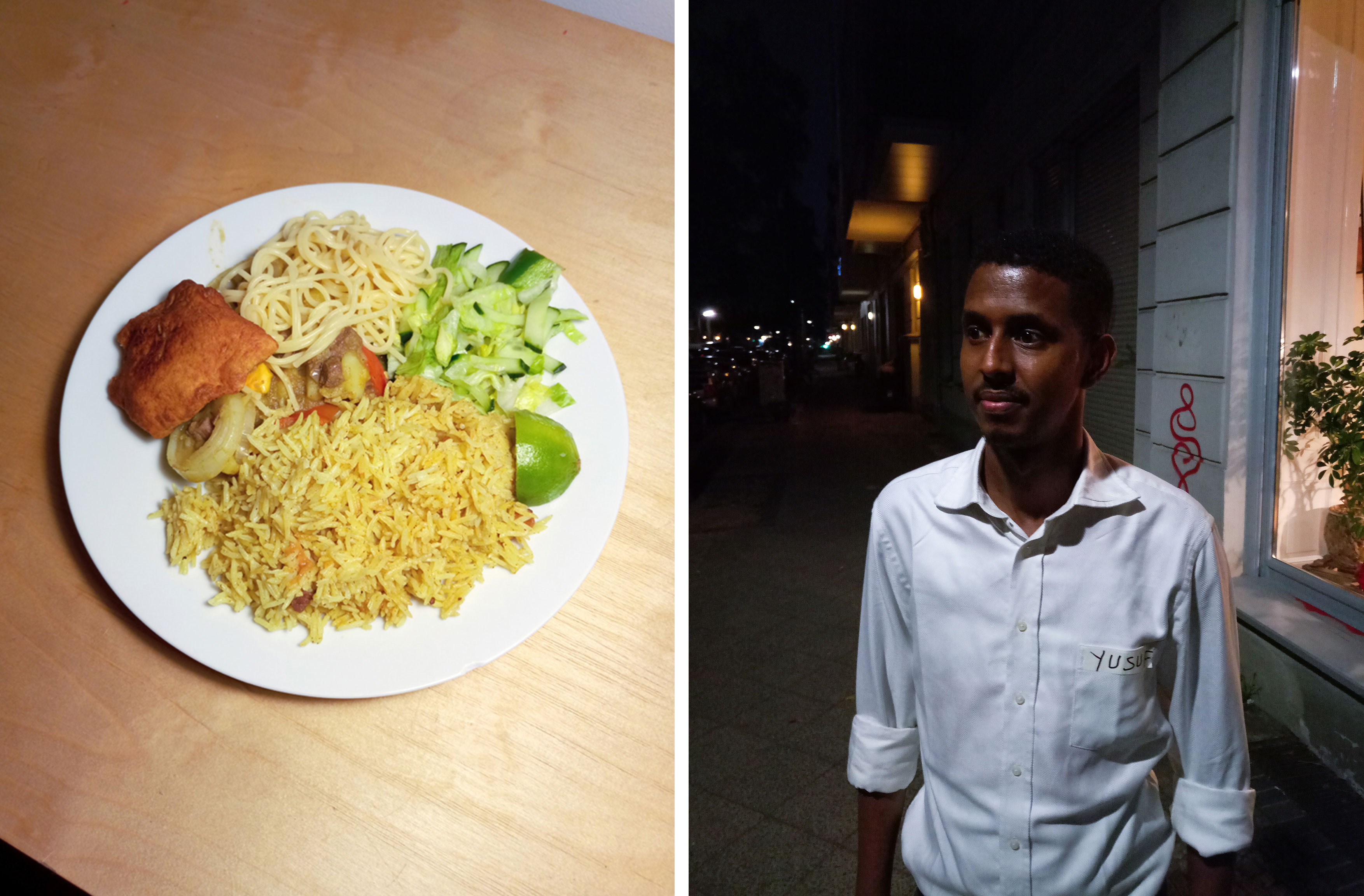 Our delicious dinner, and Yusuf.

Teams are drawn out of a hat and I’m paired with Lisa who’s originally from Hamburg, but has been attending Über den Tellerrand events on and off since 2015. “When you start chopping an onion and begin to talk to the person next to you, there’s no barriers anymore, you’re doing the same thing.”

I get what she means. There is an almost tribal sense of community when cooking and eating together like this. I was so overwhelmed by how quickly I was welcomed in. 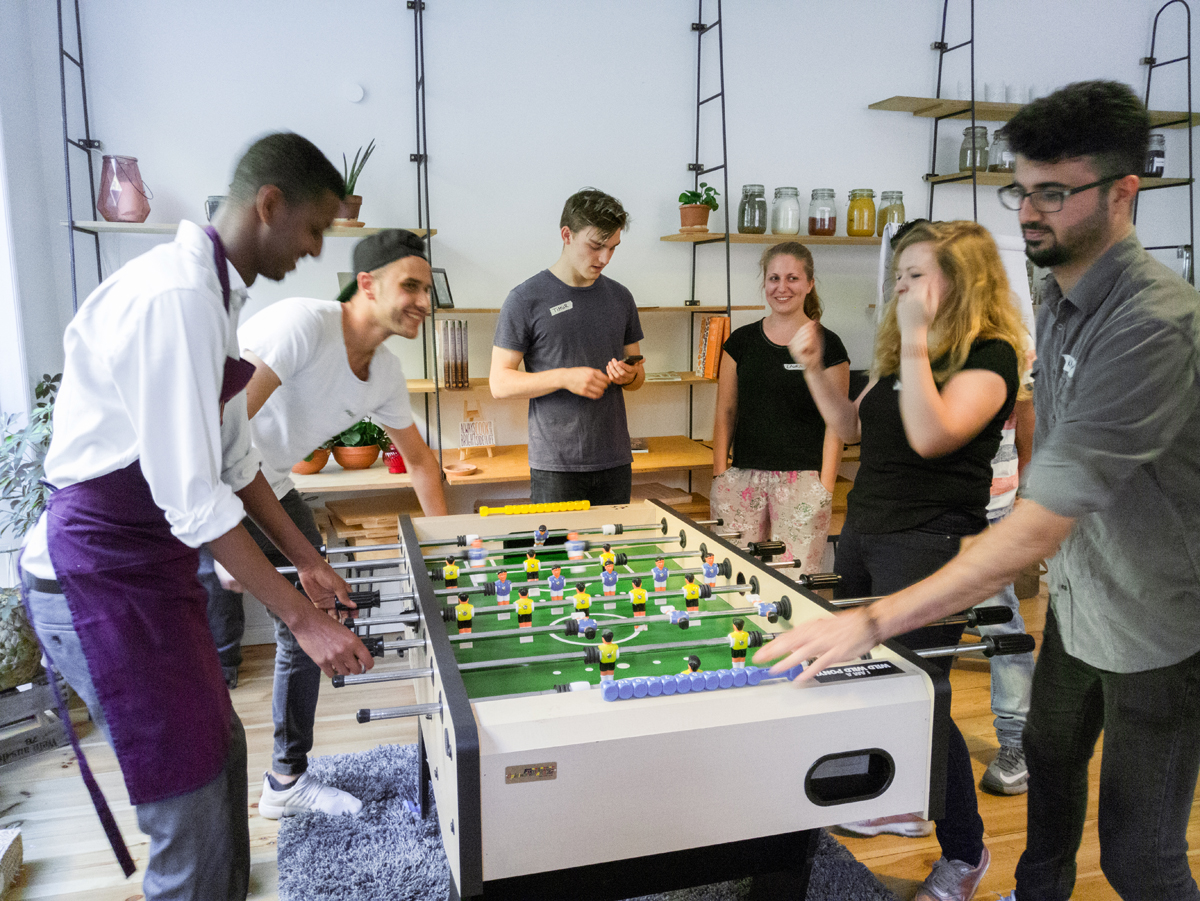 My work often involves treading carefully around my subjects, but I felt that by using this small and inconspicuous Kodak Ektra I was able to document the intimate atmosphere without being obtrusive.

I wasn’t the only one taking pictures with my phone, and I’m sure this familiarity allowed me to capture the environment without interfering. 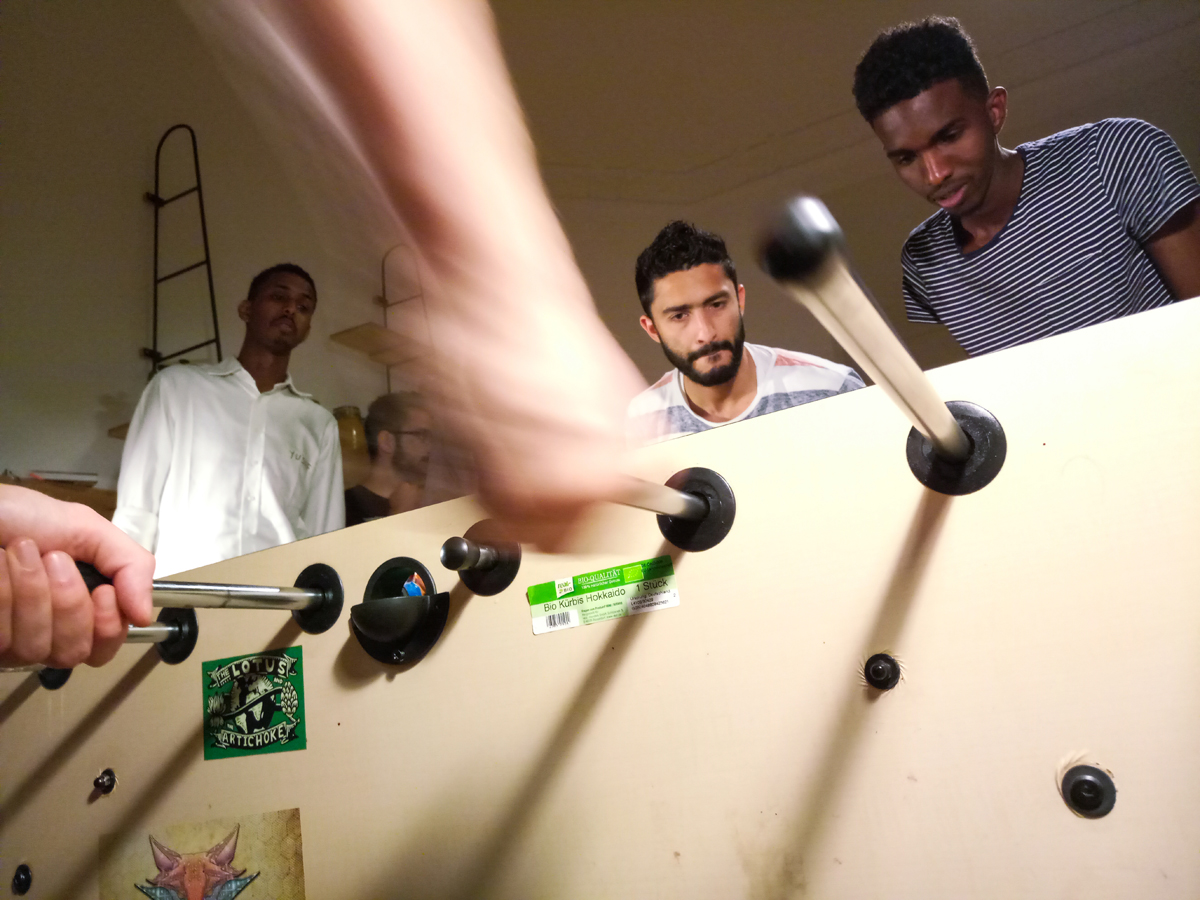 Katja celebrates scoring a goal. Who will win the baklava prize?!

The vibe is contagious, and by the end of the evening I have already agreed to attend another cooking event the day after, as well as football practice the following evening. 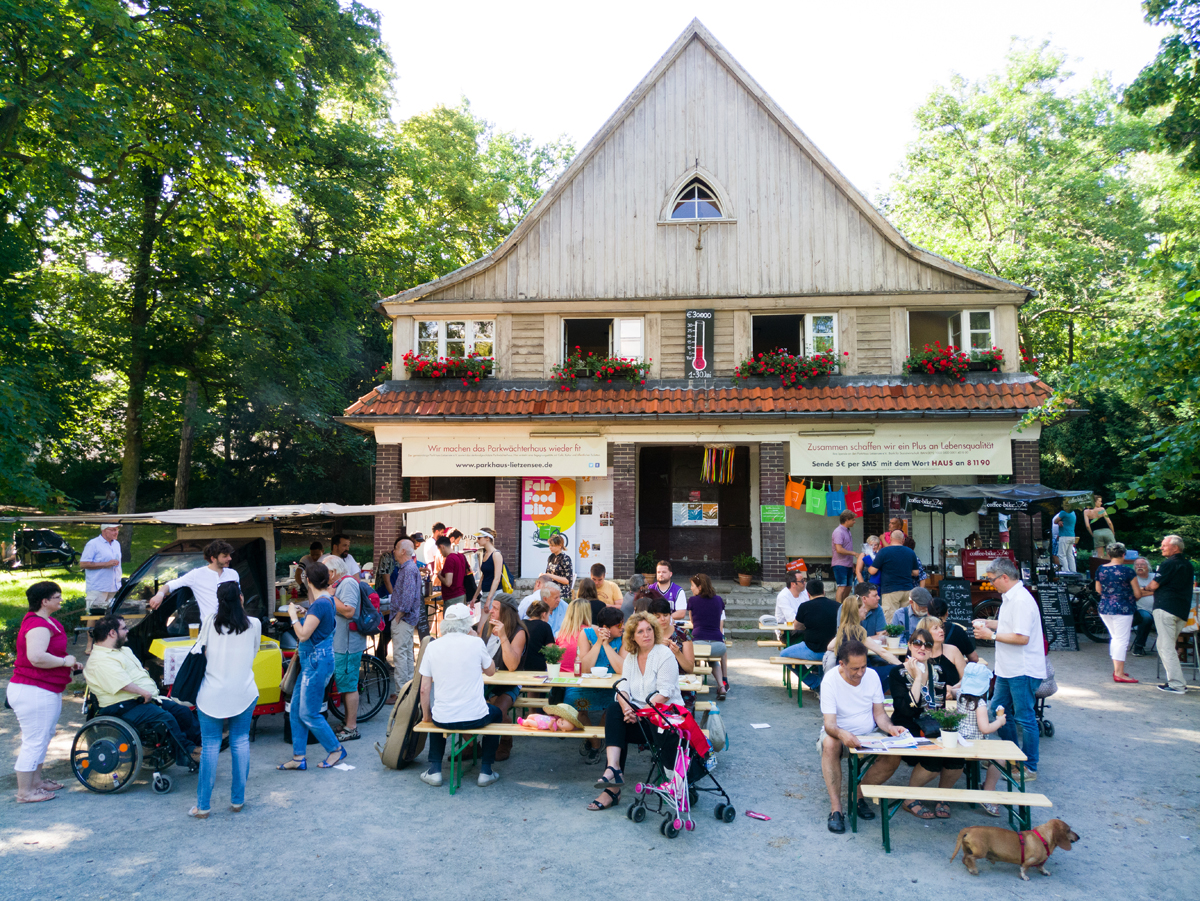 I arrive the next afternoon at Leitzensee park in Berlin’s Charlottenburg district and the Syrian barbecue has been keeping a hungry crowd fulfilled for hours already. 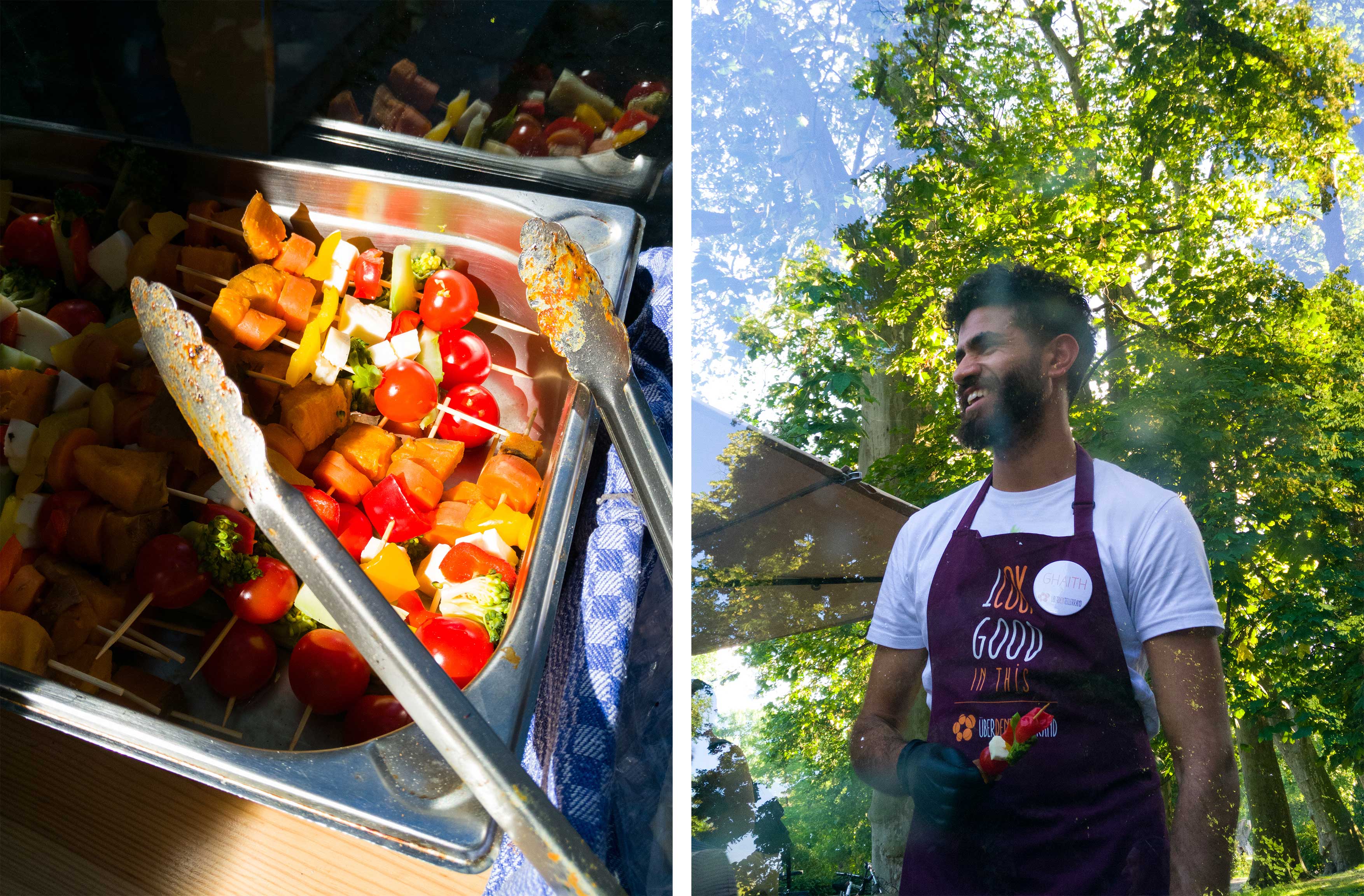 Ghaith shows his skills on the Syrian barbecue.

Immediately I see a familiar face behind the grill: it’s Ghaith, a refugee from Syria/Lebanon who I met last night. We strike up a conversation about the impact Über den Tellerrand has had on his life in Germany so far.

“It’s like a chain, with one connection leading to another,” he says. It’s a concept that’s becoming all too familiar to me, as I prepare to join football training the next day. 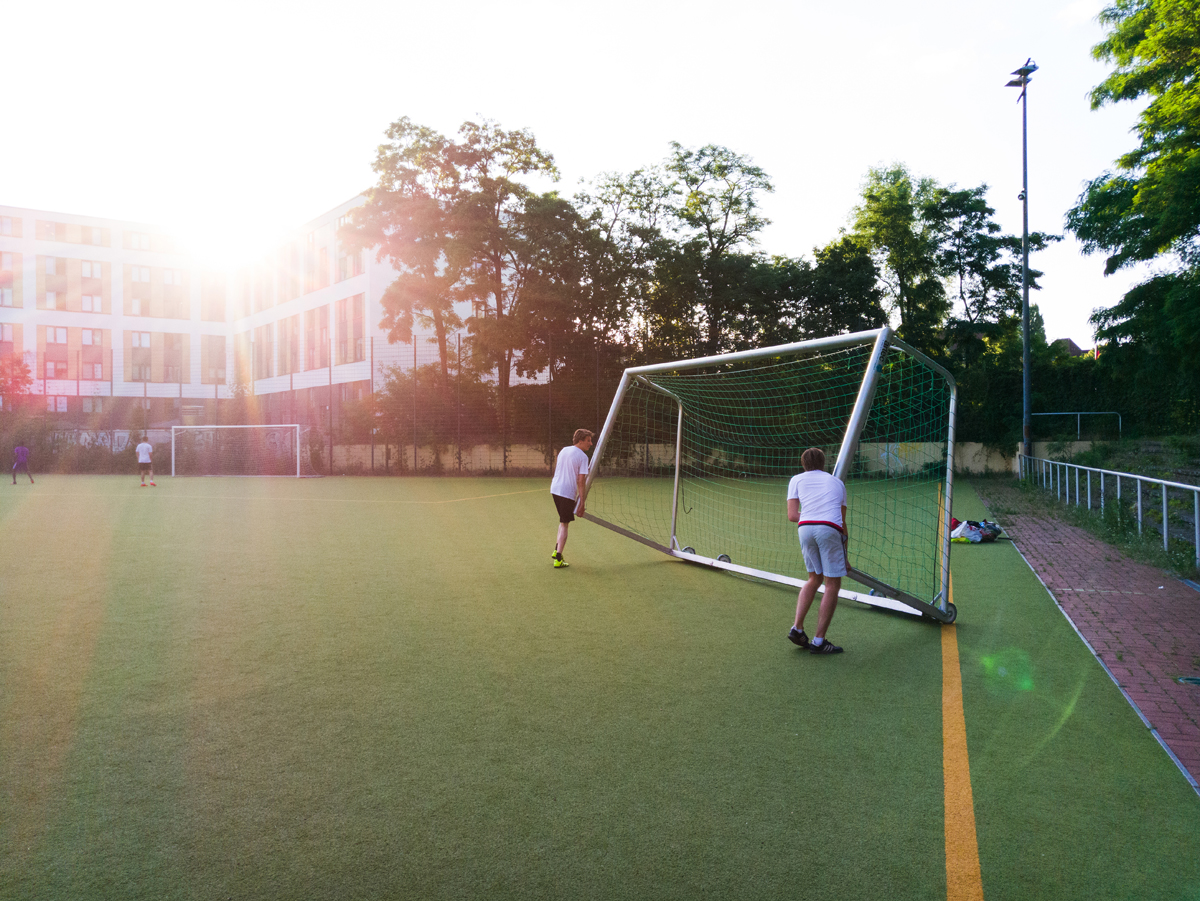 Timur greets me at the training ground as the sun is setting, marking the end to a scorching day in Berlin.

Before the match kicks off he explains to me that aside from the structure that football brings to some of the refugees’ week, many are just happy to play in a team with familiar faces every now and again. 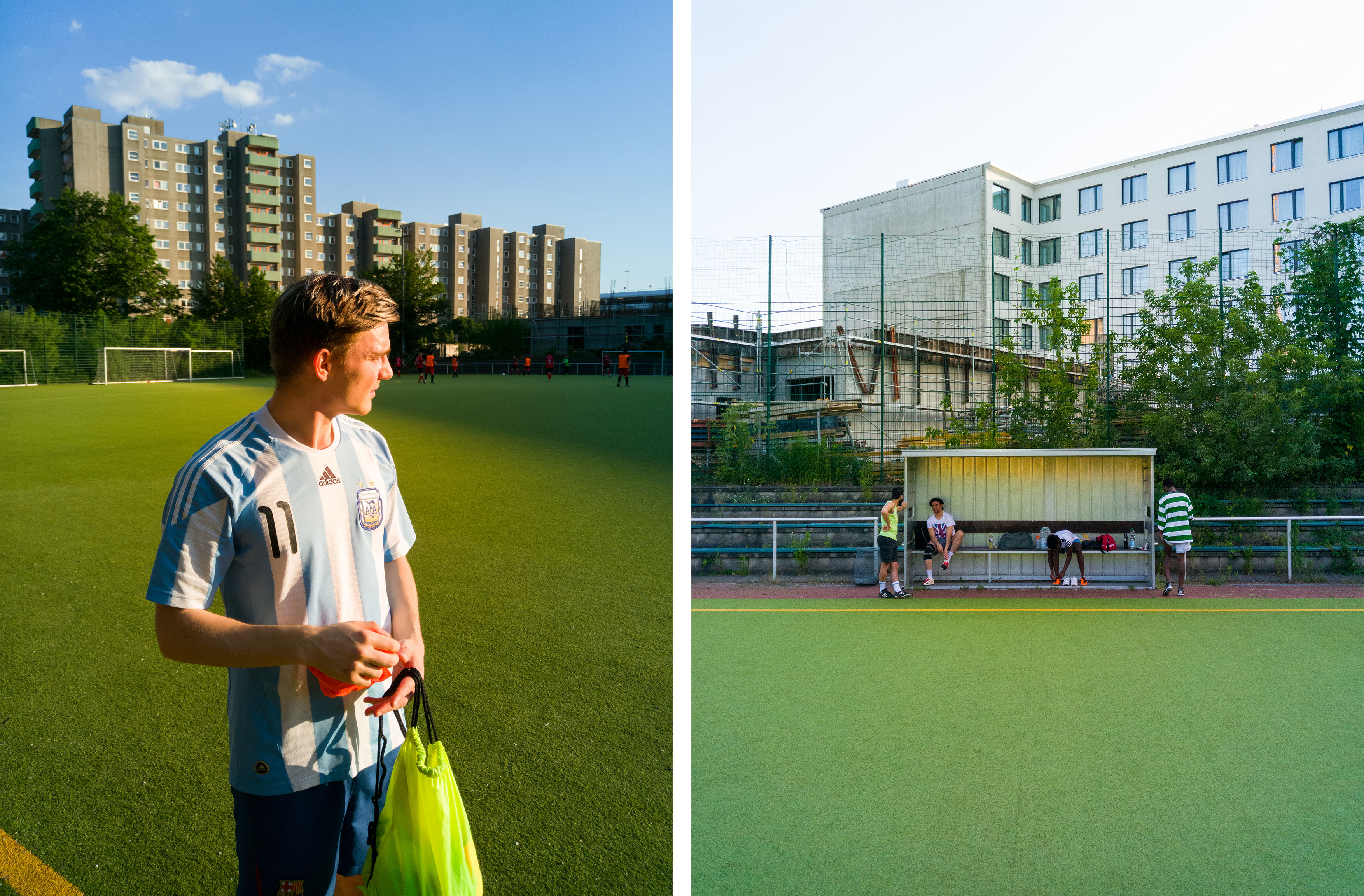 Timur (left), and some of the others players get ready for training.

He elaborates that many of these young men are living in a precarious situation, a state of limbo, waiting for their asylum to be approved or in the worst case, declined – in which case they would be sent back to their home countries, often places ravaged by war.

My mind wanders back to Yusuf, and the excitement in his face as he told me about the Abschiebeverbot (a document prohibiting him being sent back to Somalia) that he just received from the German government, essentially allowing him to stay in the country for a further three years. 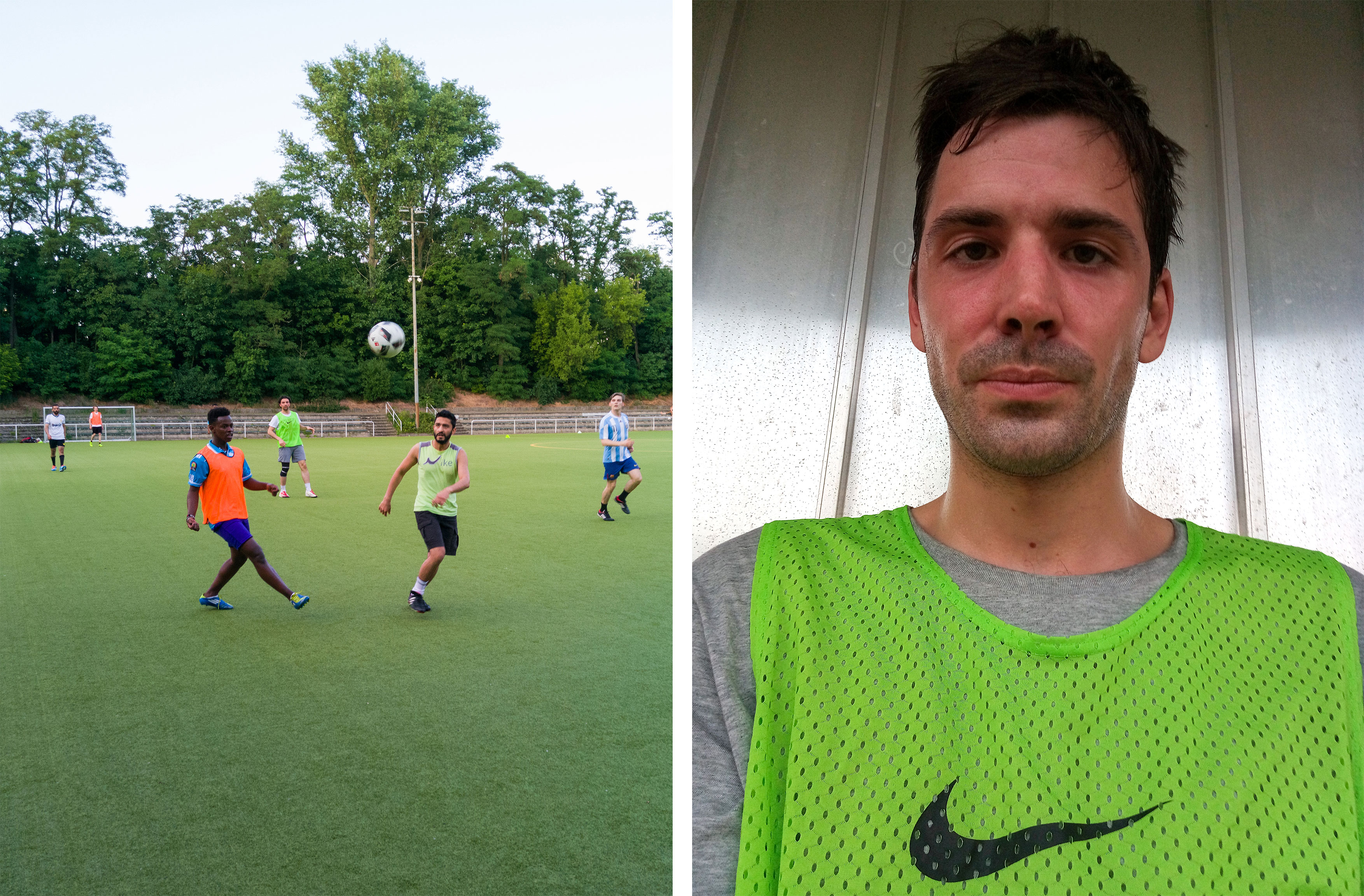 The game, and a suffering selfie after.

Over the last 5 years I have documented a great deal of struggle that refugees and migrants have faced in Germany. I see this story as a turning point in my coverage, shifting my gaze towards the exciting opportunities that now lie before so many individuals who can finally call Germany home.

Amid the uncertainty and anguish, there are those whose lives are changing every day, and thankfully there are organisations like Über den Tellerrand that are supporting them – a chain that I now feel honoured to be a part of, albeit in a very small way.

Linkedin
RELATED ARTICLES
OTHER ARTICLES
Tough fines and arrests for drug possession and supply is pushing festival-goers towards unsafe measures to consume or smuggle in their substances.
An abortion storyteller talks about the termination of her pregnancy and the harassment she’s received for sharing her story online.
In the latest instalment of Photographers in Conversation, the creator talks portraiture, platforms and taking inspiration from Little Simz.
A young woman recounts her experience of being harassed by anti-choice campaigners as she was seeking an abortion in Glasgow.
Following the release of his latest album, the rapper talks about finding a new approach to songwriting, attitudes to poverty, and why his music is more than a political statement.
Protestors gathered outside Downing Street following the latest atrocities committed by Israel against Palestinians living in the besieged strip.