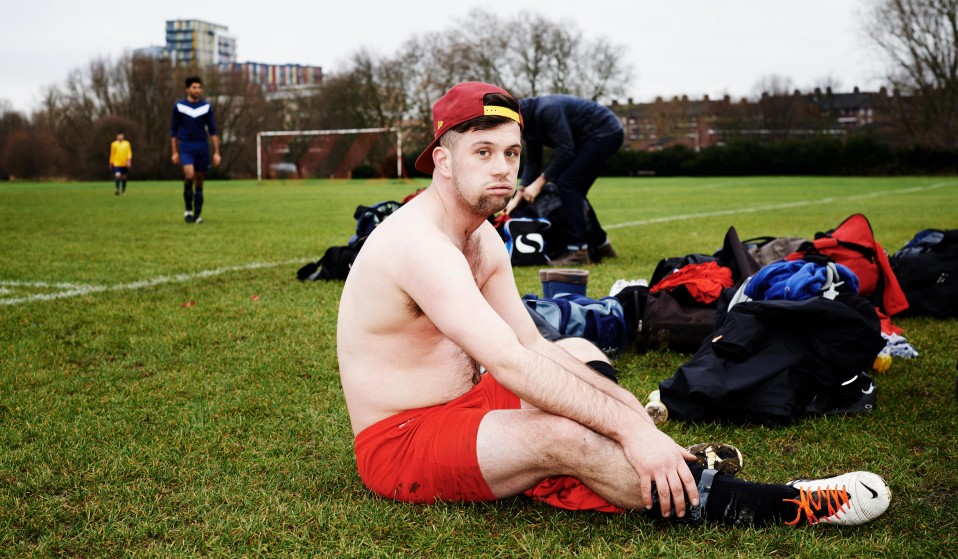 In documenting the drama that spills across Hackney's football pitches, photographer Chris Baker has uncovered a world of camaraderie and confrontation.

In documenting the drama that spills across Hackney's football pitches every week, a former player-turned-photographer has uncovered a world of camaraderie and confrontation.

Every week he’d gravitate to London’s Hackney Marshes, ‘the spiritual home of Sunday League’, knowing he’d find the game in its rawest form: 88 pitches packed with amateurs chasing a moment of glory.

But instead of documenting games, Baker wanted to focus on the little details: be it the chain-smoker who desperately needs to be substituted or the lone dog-walker watching from the sidelines.

“The more I went down there, the more I realised that the reason people play Sunday League is that you’re basically 10 years old again,” says Baker. 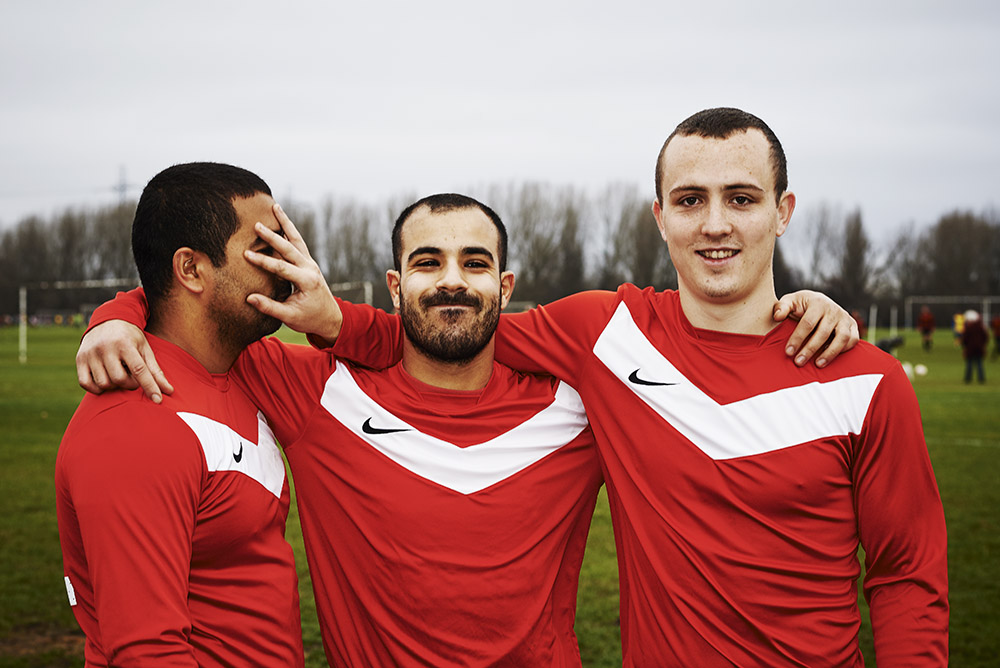 “You forget your troubles and just revert to your school days. Whenever you finished playing at lunch time, it didn’t really matter who’d won… but you’d still taken it seriously enough to fight over it.”

Baker knows that feeling well. He had football trials at the age of 10 and professional interest at 16, but eventually gave up hopes of a professional career and embraced Sunday League instead.

While approaching the game as a photographer, he’d take one look at the weather each week and know exactly what kind of shots he’d get. Sunshine meant spliffs and layabouts; rain meant no-shows and sliding tackles.

But there would always be stories – and Baker collected just as many of those as he did pictures, condensing the project into the photo book Sunday Football.

One of its many characters is referee Max Edwards. To give a better sense of the subculture that lies behind the pictures, he shared his unique perspective from the middle of the park. 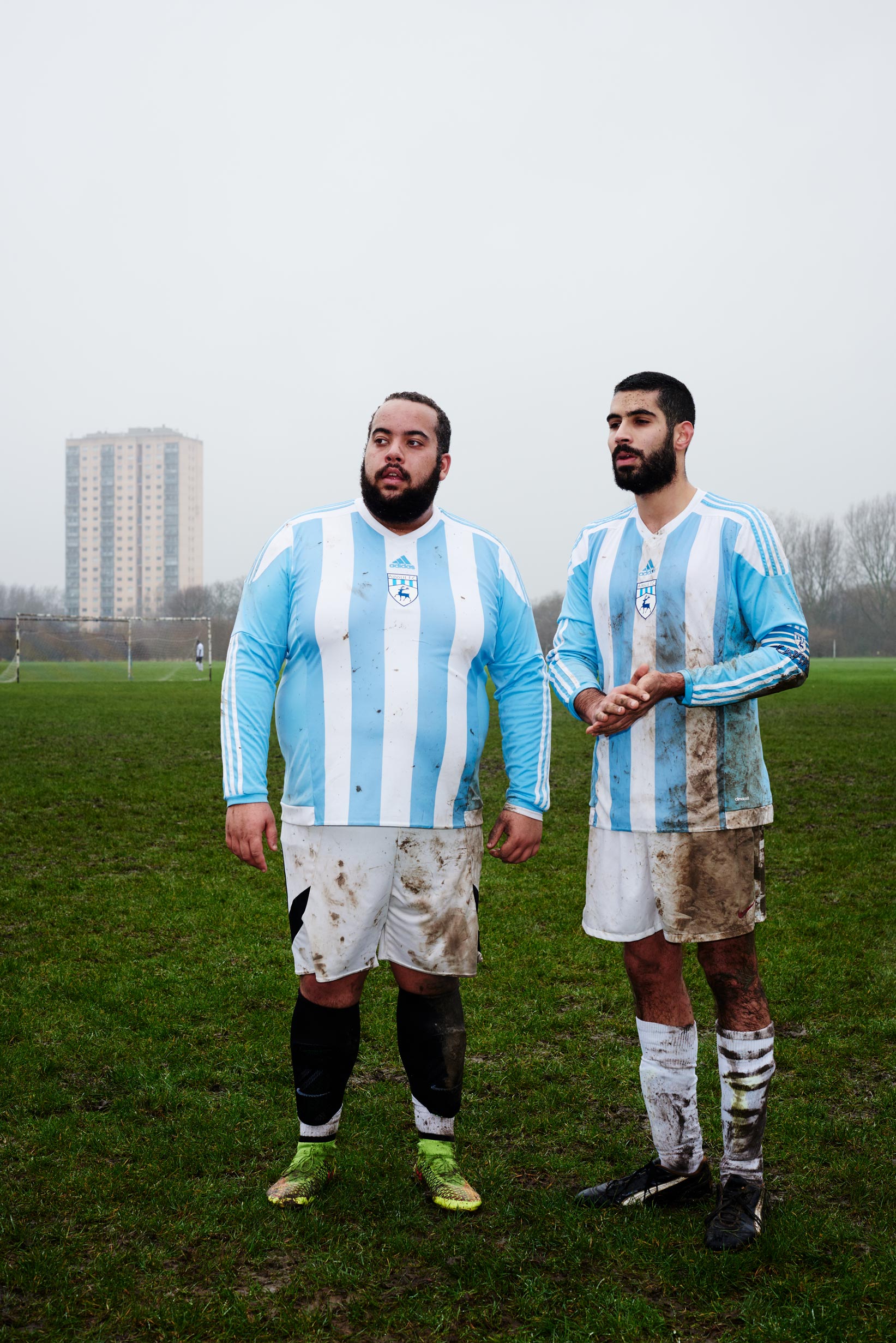 “Kick off is at 10.30 and within an hour, the lads on the sidelines will have cracked open a few beers,” says Edwards, who works at a literary agency in London for his day job.

Half the players will have had a few too many drinks the night before, he adds, and it becomes quite clear when the team is headed to the pub for the rest of the day.

“I once sent someone off for a tackle about 30 minutes in and he came up to me at half time to say, ‘Sorry, mate. I’m hungover as fuck and I can’t help myself.’ But at least he had the niceness to admit it.” 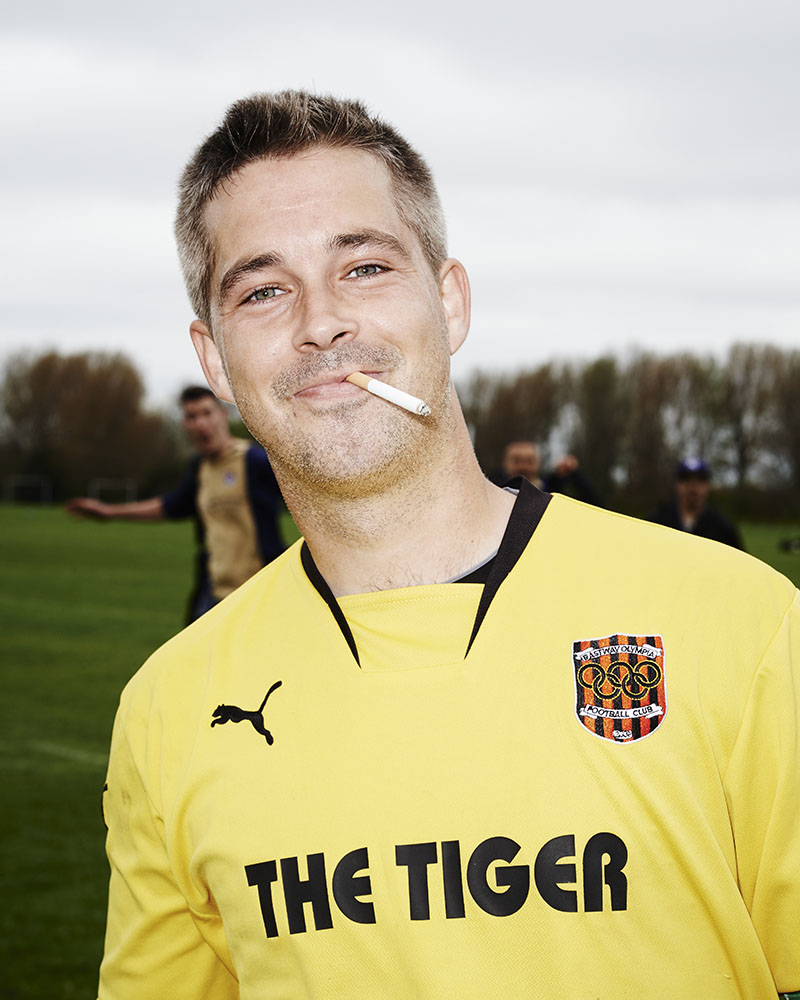 It takes a certain level of measuredness to navigate an atmosphere like that, says Edwards. Hackney Marshes is the kind of place where he’ll end up showing a red card every three or four games – far higher than elsewhere.

That’s not because of the level of competition, he explains. The players are more interested in having a laugh than topping the league. But if they see one of their own getting a bruising, that’s when trouble kicks off.

“You learn to recognise the type who will talk their way into trouble or sneakily elbow someone in the head.

“It’s always the loud mouth: a little guy with a big head and a bit of talent who thinks, ‘I’m going to be the rottweiler who gets things done.’

“They’ll foreshadow it by being on the referee’s back, or the opposition’s, from the first minute. They’re there to protect their team, as they see it.

“And if someone does something that they don’t like, then they’re going to encounter a world of trouble – either from their mouth or their fists.” 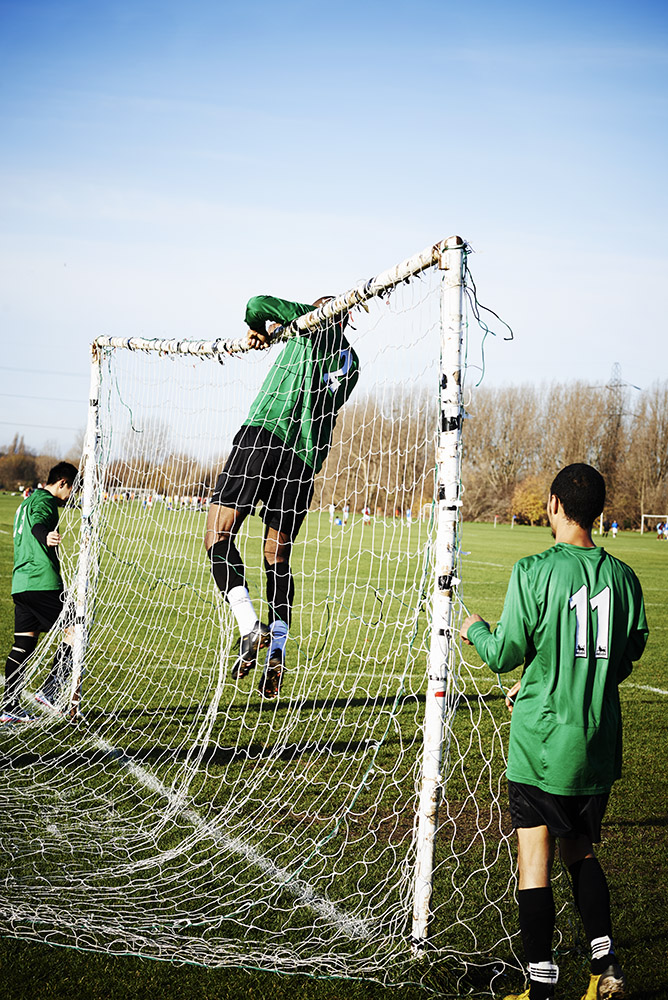 Then there’s the tension within teams. Normally they’re set up by a group of five or six friends who then rope in five other people that only one or two of them will know – a formula that, Edwards says, almost guarantees conflict.

“There’s a pair of brothers in Hackney who are famous for not getting on with each other. They no longer play on the same team because they got in a fight during a match.

“I guess when you know someone better than anyone else, you also know how to wind them up and you’re not afraid to tell them where to go if they miss an open goal. 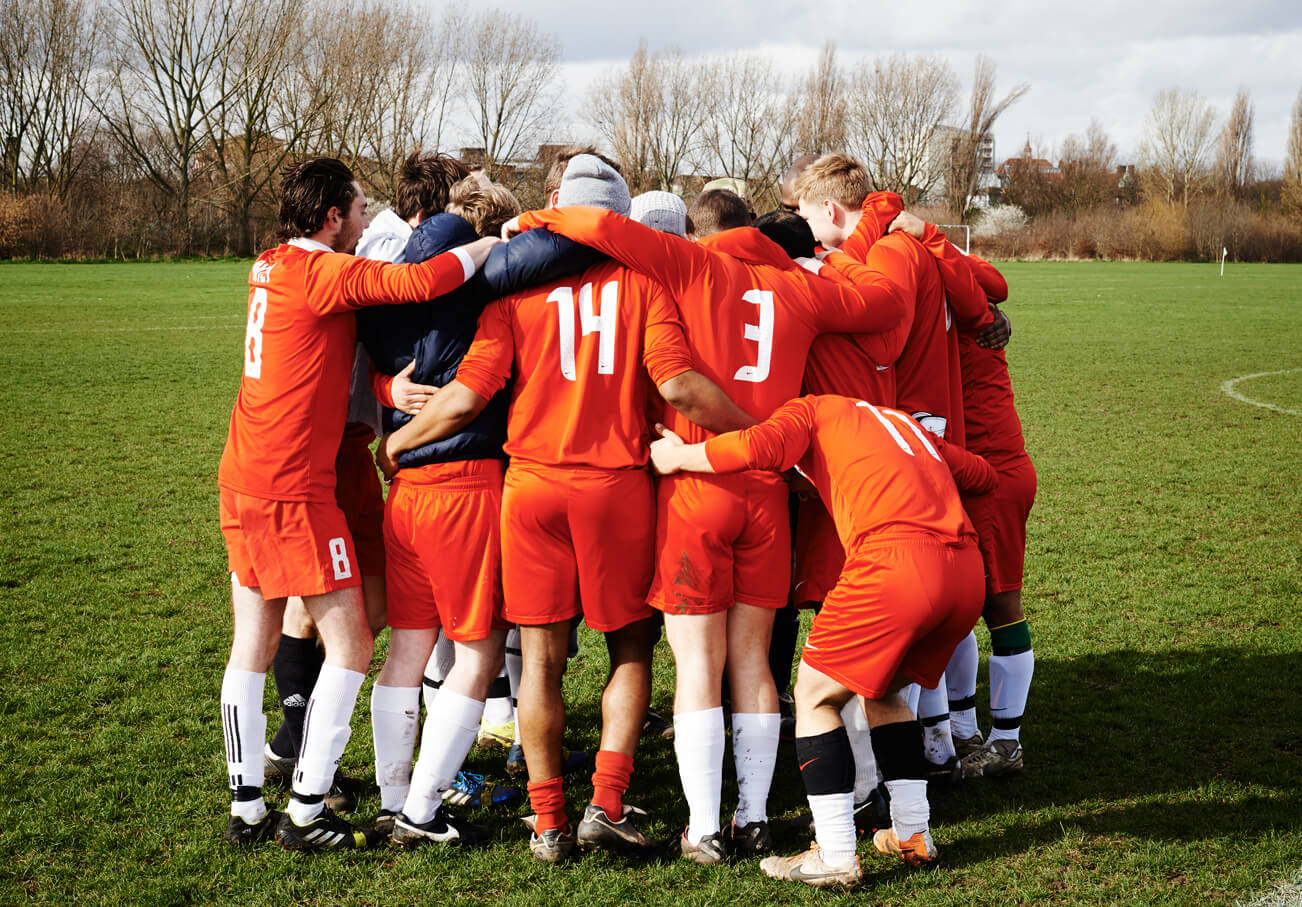 Within any Sunday League team, Edwards adds, you’ll find a narrow mix of people – like-minded individuals who have decided, for one reason or another, to line out together.

But taken as a whole, the league makes for a melting pot of identities: from entire squads of Ghanaians or Greek-Cypriots to employees at the same company or regulars at the same pub.

“From a referee’s perspective, those cultural differences can be fascinating but quite dramatic.

“When Russian and Ukrainian teams object to a decision, for instance, four or five of them will come rushing around you – but they won’t swear. They’ll be civil in the way they protest, whereas a British player will shout, ‘You’re a fucking cunt!’ and think nothing of it.

“The Portuguese players are much more likely to go over very easily, shall we say. Terrible stereotyping, but it’s true. Even if it is a foul, they’ll add the extra roll to make sure.” 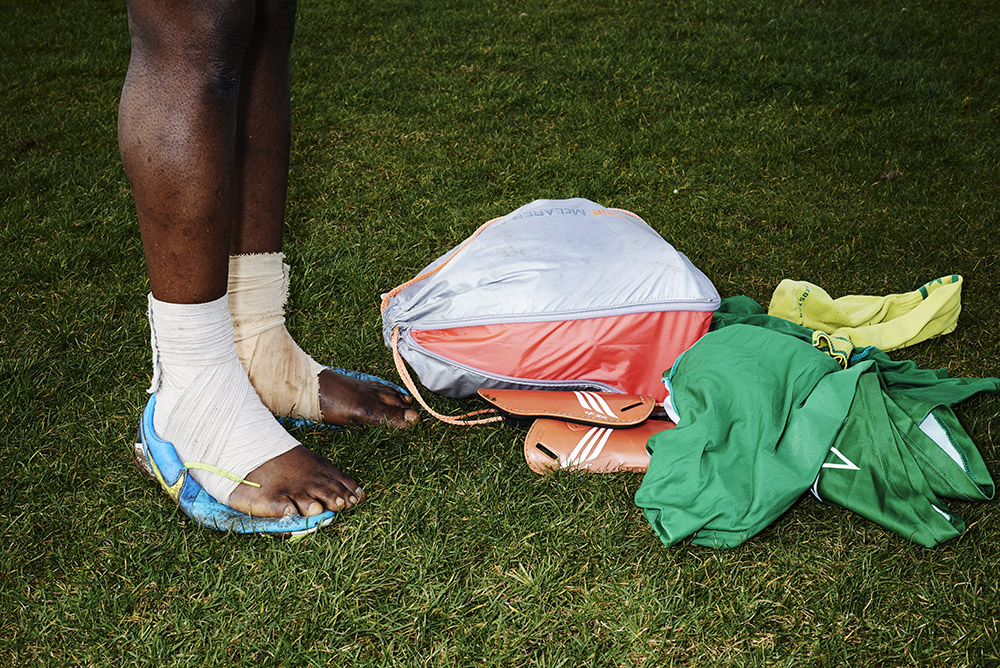 The voices of authority

One common link among referees, Edwards says, is a hint of power. They’re often police officers, lawyers or politicians – roles that not only involve speaking with authority but absorbing varying levels of frustration.

“There’s abuse in every game but you know that it’s not actually you the offence is being hurled at – it’s most often against the player himself.

“What’s special about the marshes is that you’ll have 30 to 35 referees having the usual banter both before and after. Everyone is supportive of each other because we all know that, on its day, you get to be part of something brilliant. But when it goes wrong, you can feel like absolute shit after a match.

“More and often than not, it’s 90 minutes of having a laugh. You’ll get people just turning up and chatting with you at half time; you’ll get a goal so good that you can only stand there and admire it, alongside the other team who have all congratulated the player with a pat on the back.

“Moments like that are brilliant. They’re a reminder that football really is a universal language.” 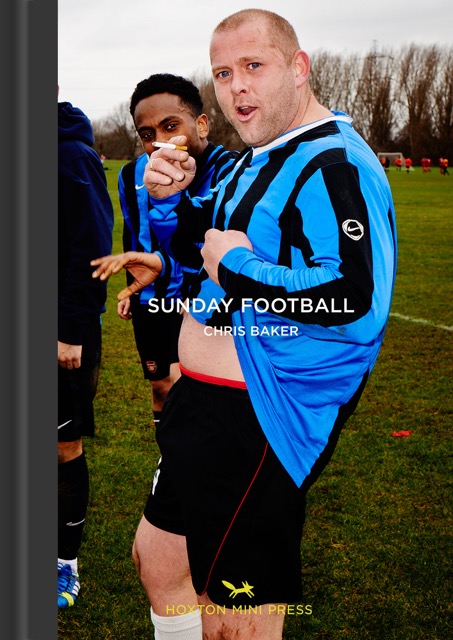 Linkedin
RELATED ARTICLES
OTHER ARTICLES
Yesterday, rail workers came together to protest poor pay, working conditions and job cuts in their latest round of strikes.
From the chip shops, to the bingo parlors and burlesque dancers, photographer Mike Coles remembers capturing scenes of holidaymakers by the English coast.
A sharp increase in officers armed with the electrical weapon is resulting in serious injuries and deaths.
Photojournalist Fiora Garenzi spoke with people still living in Eastern Ukraine, an area which seen some of the heaviest fighting since the war began.
As the Criminal Bar Association enters its fifth week of action, criminal barrister Russel Fraser explains why the legal professionals have walked out and how action is likely to escalate.
After rewriting the indie rulebook with her devastating songs about romantic longing, the singer-songwriter is now imagining a future in which the artist is no longer a product.