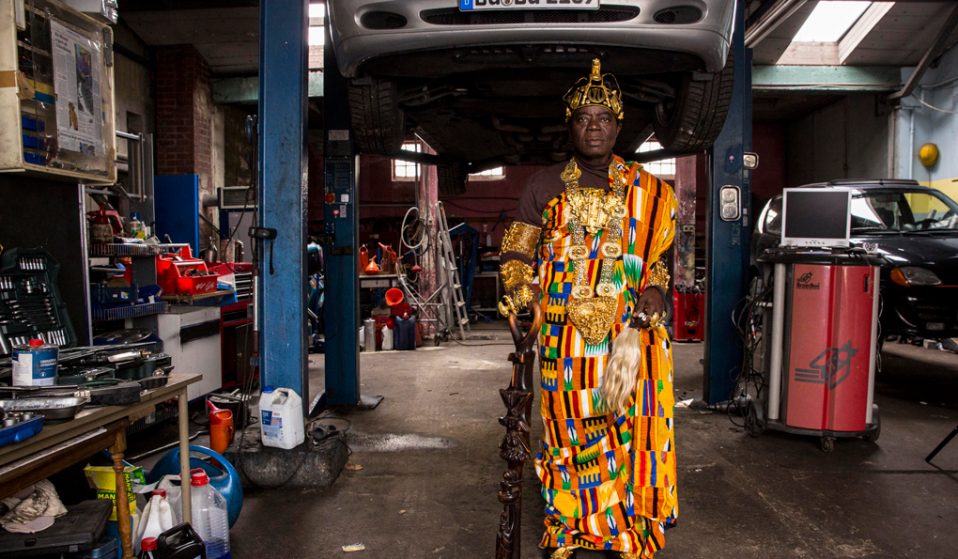 In west Germany, Céphas Bansah may look like just another car mechanic wearing a boiler suit. But every spare moment is dedicated to supporting his people back in Ghana.

In west Germany, Céphas Bansah may look like just another car mechanic wearing a boiler suit. But every spare moment is dedicated to supporting his people back in Ghana.

Céphas Bansah works as a self-employed car mechanic in the German town of Ludwigshafen. But in his spare time, he oversees the development of his hometown – Hohoe, capital of Ghana’s Gbi Traditional Area – through WhatsApp and Skype.

“Being a king is not a profession, it is my life’s work,” says the 70-year-old. “My happiest moments are when I can help in Ghana through my efforts here in Germany.” 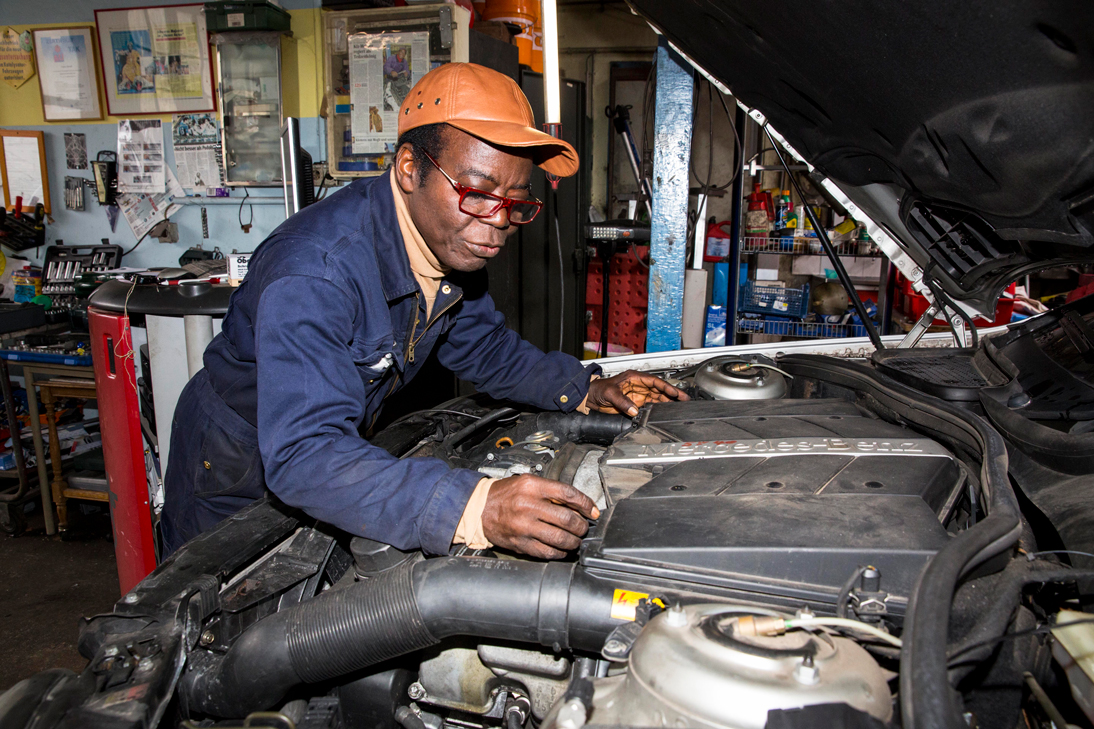 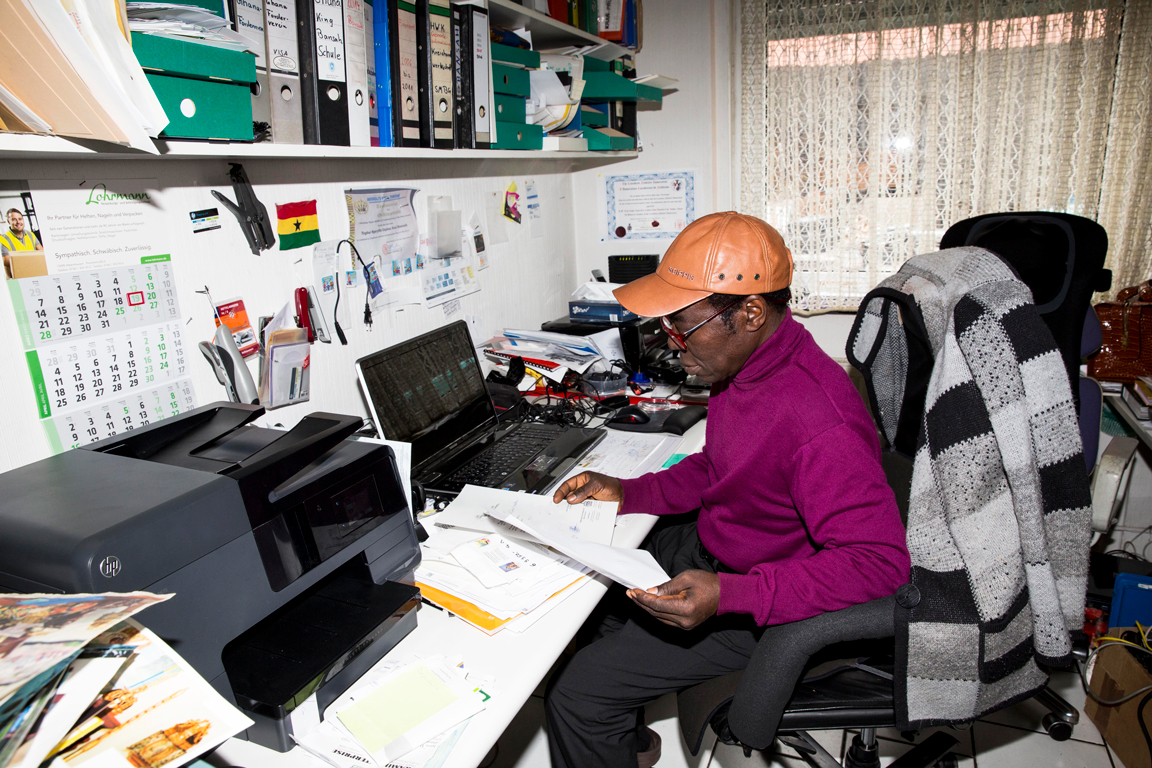 Technically, the Gbi Traditional Area is not a monarchy and the title Ngoryifia literally translates as ‘development chief’, an honorary position bestowed on people thought of as respectable and believed to be capable of helping an area.

For Bansah, that could be securing sources of clean drinking water, redeveloping prison infrastructure for women and young men – “Until recently all inmates, whether male or female, were housed in a single room! I think you can imagine how they had suffered.” – or helping to fund life-saving treatment of a child with heart disease.

The path to this point is not exactly typical where Bansah comes from. But back in the 1970s, moving away and developing a trade felt like the only viable option to him. “My goal was to learn from the Germans themselves – the virtues of their work ethic, their understanding of technology, etc. – and bring this to my people in Ghana,” he says. “Many of my German friends today say that I am fussier than any German they know of.” 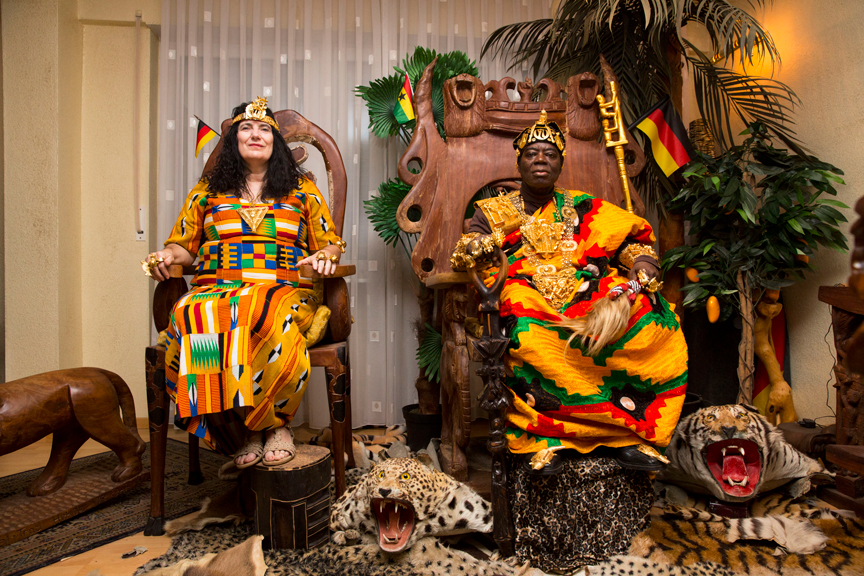 Bansah met his wife, ‘Queen Gabi’, when she came into the shop one day with a malfunctioning car. “The problem itself was found quickly but I told her that she had to come back a few more times over the next few days, that I had to test everything again,” he says. “I liked her and thanks to this trick – which I think she saw through quickly – we got to know each other.”

Those at home in Ghana struggled to understand the move, Bansah explains, but once the first of his relief projects became successful, people began to understand and respect his decision. Back then, offering support and orchestrating projects from afar required constant long-distance calls and faxes via his brother, Fredolin. But even today, over 30 years later, Bansah makes the trip back to Africa every winter.

That’s how he came to know the photographer Christina Czybik. Over the years, she’d heard stories about Bansah as an apprentice photo-editor at a news agency in Germany. When she approached him for a project in 2015, he invited Czybik to lunch and later suggested she join a delegation of family and friends travelling to Ghana and Togo later that year (at her own expense) to document his work – culminating with a visit to the Agbogboza Festival, an annual celebration of the Ewe people’s ancestral history. 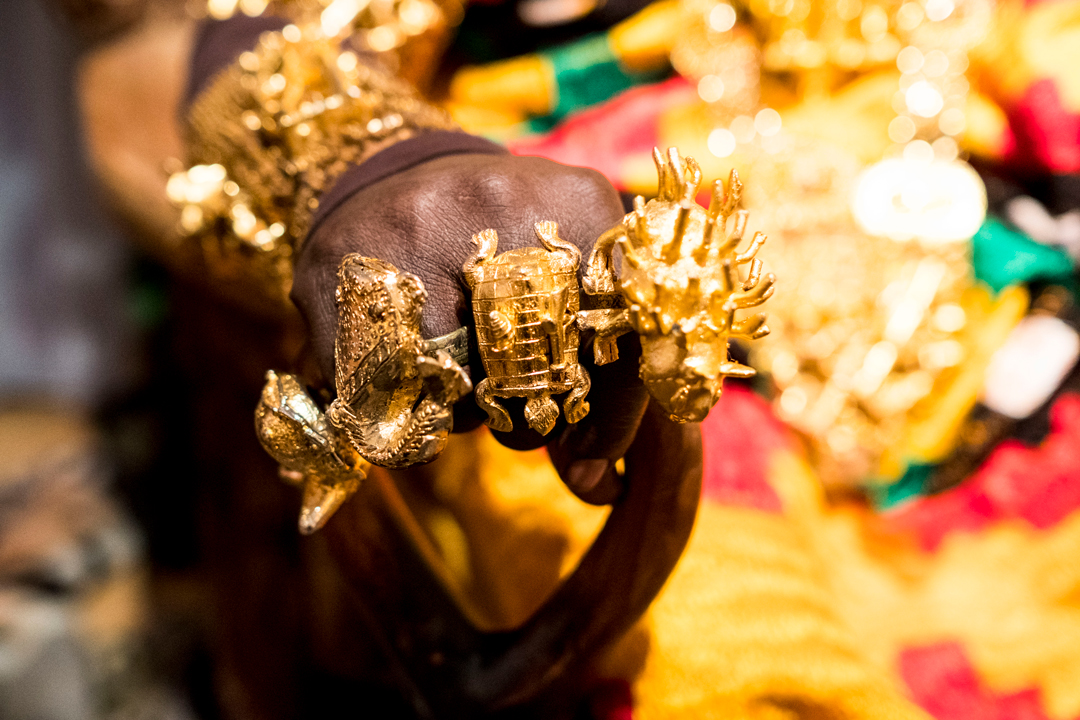 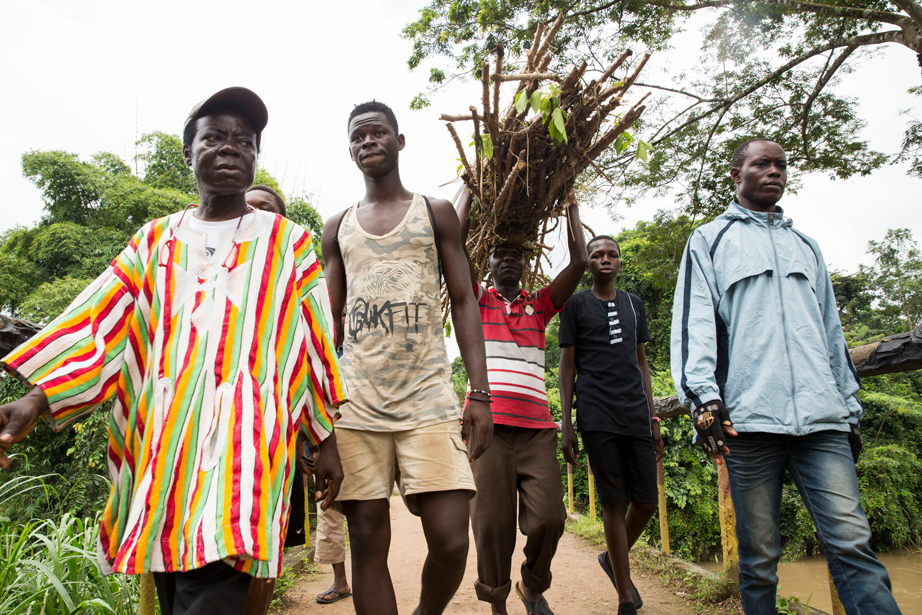 It proved to be a transformative experience for Czybik. Growing up, she was constantly taking pictures of her family: first with her mother’s waterproof camera and later with the professional equipment that her father – a private investigator – bestowed to her in a metal suitcase.

After transitioning from apprentice to photo editor over the course of 10 years, Czybik moved to Los Angeles to work for different German agencies as a correspondent, which inspired her to pick up a camera again.

First she wandered the streets alone, taking pictures of LA at night, or drove out to the desert searching for relics of Americana. But she wasn’t interested in photographing people until she saw War Photographer, the 2001 documentary about photojournalist James Nachtwey. 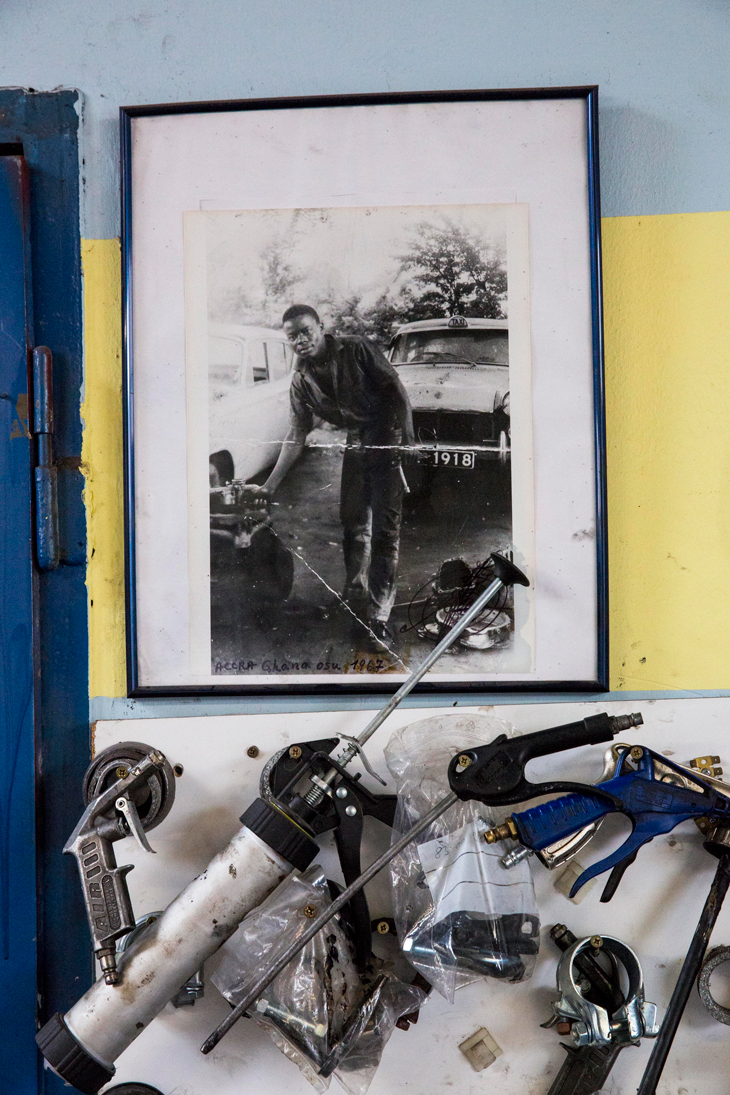 “It was a turning point; it moved me so much,” she says. “I decided that I needed to step away from working full-time in the entertainment industry, so I took a chance and moved back to my hometown of Hamburg in 2013 when my father passed away – starting as a freelance photojournalist and photo editor.”

By the time Czybik embedded herself with ‘King Bansah’, she’d completed an award-winning project on the Small Nambas tribe of Malekula, an island in the Pacific Ocean. But travelling from Accra in Ghana to the festival in Notse, Togo, proved a different kind of challenge. The bus broke down before it even started. Then came days of traversing dirt roads, cramped together with no tangible sense of time or distance.

“You realise, quite suddenly, that travel feels different there,” she says. “I learned a lot: not only about the value of patience, but about respect, about helping people. Even though people in Germany might find [Bansah] funny, my approach was to show the hard work he’s doing to support his people in Ghana, how important this person is and what he is capable of achieving.” 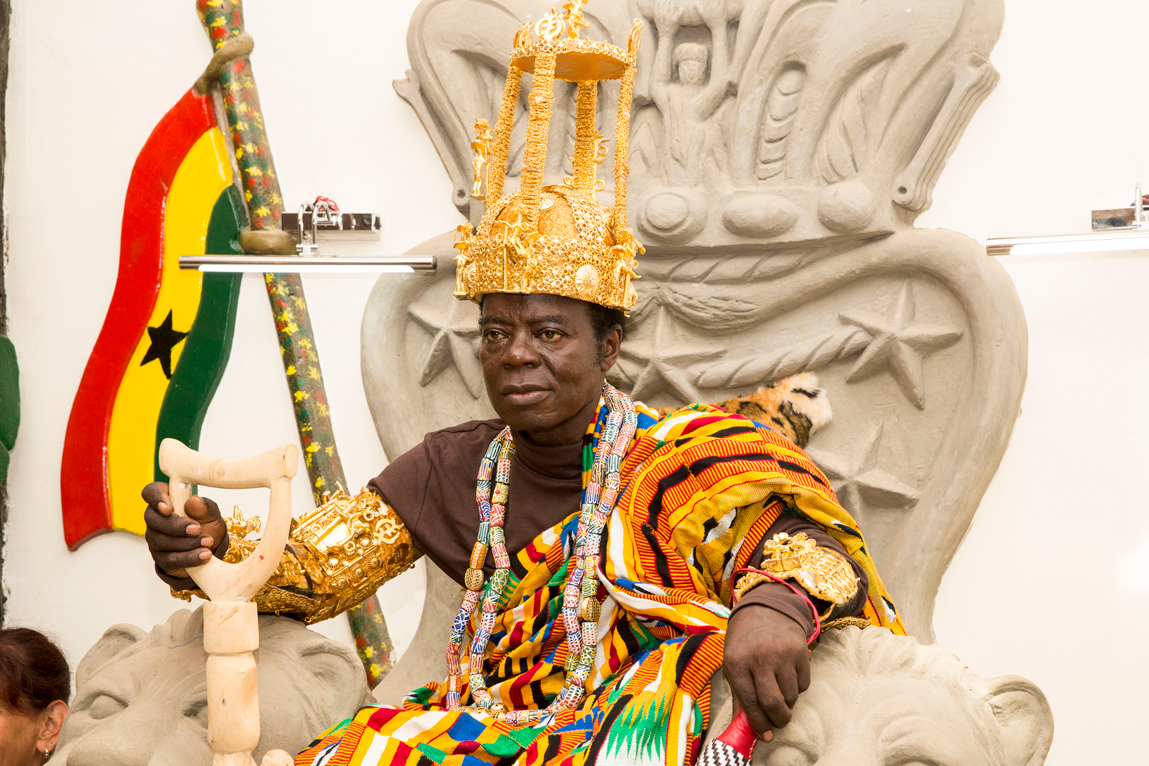 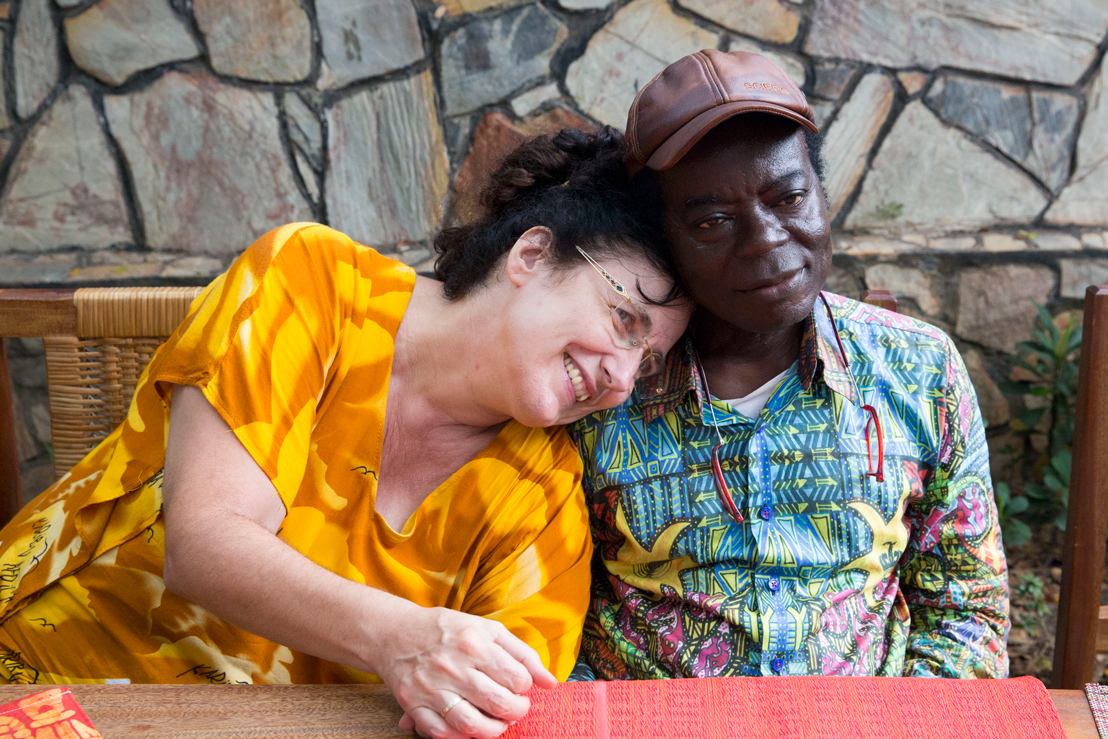 Wherever the delegation went, Czybik explains, Bansah took on a full schedule of events with gusto – shaking hands and spending time with as many people as possible – while making a point of never smiling or looking directly into the camera as long as he wore his crown.

It was heartwarming to see he and Gabi so personally invested in all of their projects, she says, and rewarding to be able to soak up a different culture from such a unique vantage point.

But asked what image she feels connected to from their time together, Czybik singles out a moment taken back in Germany: Bansah standing in his colourful Kente dress, alone in the garage. 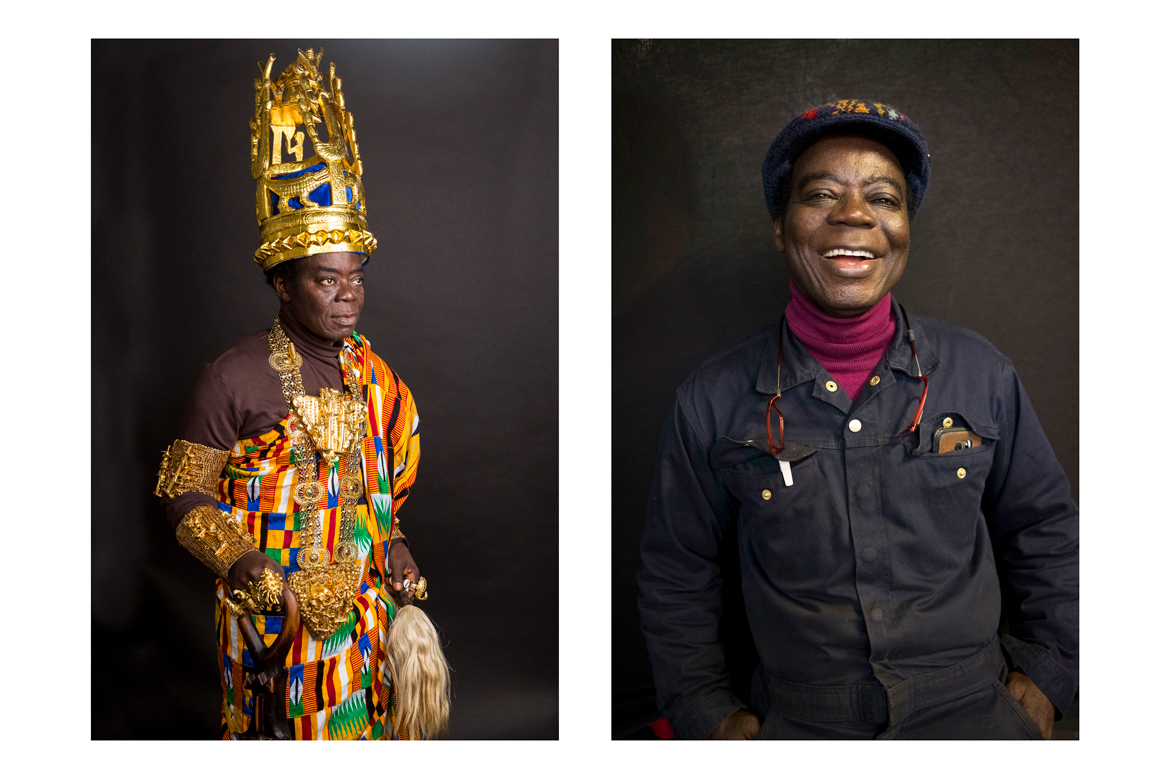 “It just doesn’t need any explanation about who he is and what he does,” she says. “For me, it’s also the symbol of bringing together two cultures, two different worlds. It’s about learning; about integration; a symbol against bias; about what you can archive if you work for it and to never give up.”

Linkedin
RELATED ARTICLES
OTHER ARTICLES
Finland-born photographer Sirkka-Liisa Konttinen looks back on her decades-long documentation of life in Northern England.
In the latest instalment of Photographers in Conversation, the chronicler of raves, protests and beyond explains why he’s drawn to such specifically visceral environments.
A new edition of a seminal book brings together iconic images of the band onstage in their full glory and backstage in moments of unguarded camaraderie.
Freddie Miller’s new series of photographs investigates who today’s trainspotters are and what drives their unfettered enthusiasm.
For decades, an area of East London has served as a community hub for Vietnamese people looking for a taste of home.
Photographer Matthew Brookes recalls following a group of young people in Venice Beach living in search of the perfect wave.