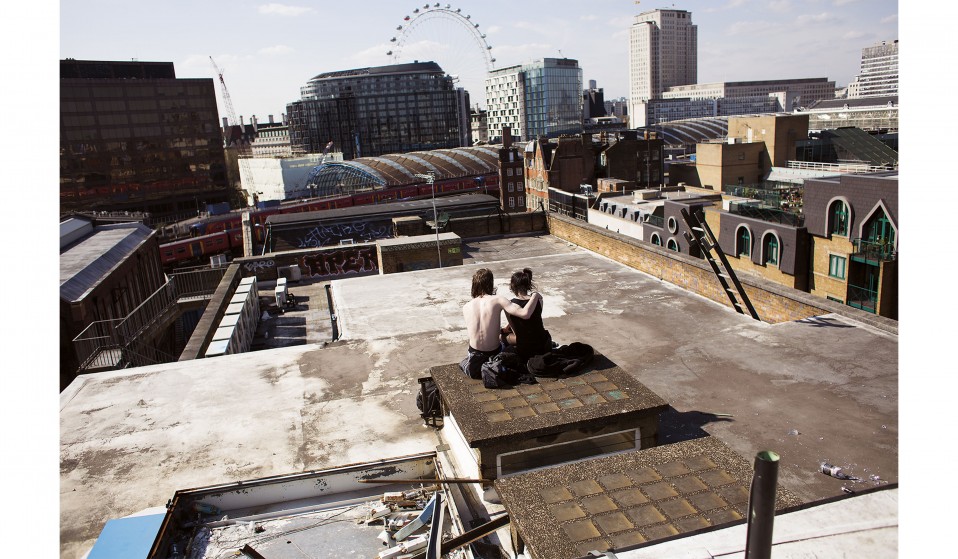 Corinna Kern showed a new face to squatting in London when she focussed on the community’s joyful moments.

Corinna Kern showed a new face to squatting in London when she focussed on the community’s joyful moments.

Corinna Kern’s candid photography gives voice to people on the fringes of society, revealing alternative and non-conformist lifestyles from an insider’s perspective. Corinna was born in Germany and studied her Masters in Photojournalism in London, where she also shot her ‘A Place Called Home’ series on the capital’s squatter community. She is currently based in South Africa, using her intimate approach to highlight human rights issues Africa.

“This shot is one of the first of my series ‘A Place Called Home’, a long-term documentary project about London’s squatting scene. It was taken on the roof of a five storey office block that began a new life as accommodation for about 100 squatters, nicknamed ‘The Castle’. It was the first squat I ever visited, at a time when I only had a vague idea about this lifestyle. Back then, my primary intention wasn’t to do a project on squatting because it’s been covered many times before; it was out of personal interest that I decided to take a look. This shot exemplifies the nature of my photographic work as it’s largely driven by my personal desire for new experiences, especially for alternative and non-conformist ways of living.

My first visit to ‘The Castle’ was on a Saturday night, as a rave was being held in its vast interior. I was fascinated by the transformation of the space as it had taken on the vibe of the people and their lifestyle. Surprisingly, the friend who accompanied me knew the building as her old work place and said that, ‘It was strange to see how something that used to be such a professional and formal environment could transform into something so free flowing.’

The photograph of the couple enjoying their afternoon on The Castle’s roof, for me, perfectly embodies the sense of freedom attributed to squatting. I ended up spending quite a lot of time on this roof myself, indulging in the view on London’s cityscape during summer time. After regularly encountering new squatted spaces, I soon recognised the great potential for a documentary project. As squatting is legally restricted to commercial buildings, each squatted space gets endowed with its own unique vibe when its unusual environment is transformed into a home. For ‘A Place Called Home’ I spent a vast amount of time in seven different squats, including a fabric storehouse, a garden centre and a cabaret restaurant. I focussed on the concept of home within this communal lifestyle while challenging stereotyped notions. By revealing the joyful side of squatting, I managed to give this well worn topic a fresh angle. ‘A Place Called Home’ ended up gaining recognition in international photography contests and exhibitions.”

Linkedin
RELATED ARTICLES
OTHER ARTICLES
Hundreds gathered together to protest the policing bill by making as much of a racket as possible.
Ahead of the policing bill reaching its final stages in the Lords, protestors came together to rally against the legislation.
From Brooklyn gang members, to Welsh miners and the residents of East Harlem, Bruce Davidson used his camera to shine a light on the most marginalised.
In 1984, Martin Shakeshaft set out to document the miner’s strike as it really happened, using his photography as a tool for activism.
Photographer Melanie Nissen recalls capturing the characters, fashions and rarefied chaos of a rapidly-expanding set of punk bands who helped to redefine the genre.
Photographer Alice Mann reflects on capturing the camaraderie and discipline it takes to succeed in a highly-competitive sport.