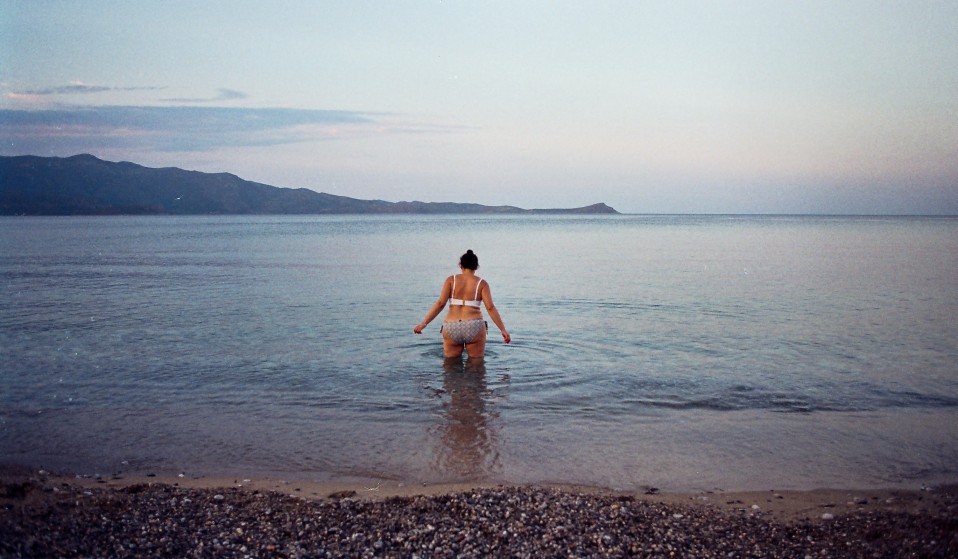 While the international journalistic community paints a polarised portrait of Greece, this photojournalist captures a peaceful and unique coherence of his country.

Greece: seemingly a country of contradictions. Sparkling blue waters, histories of magic and mythicism are foundational to the country, but recent years have painted a different picture. Their financial crisis, which started circa 2007, brought forward painfully haunting images of families sobbing over their disappearing livelihoods. 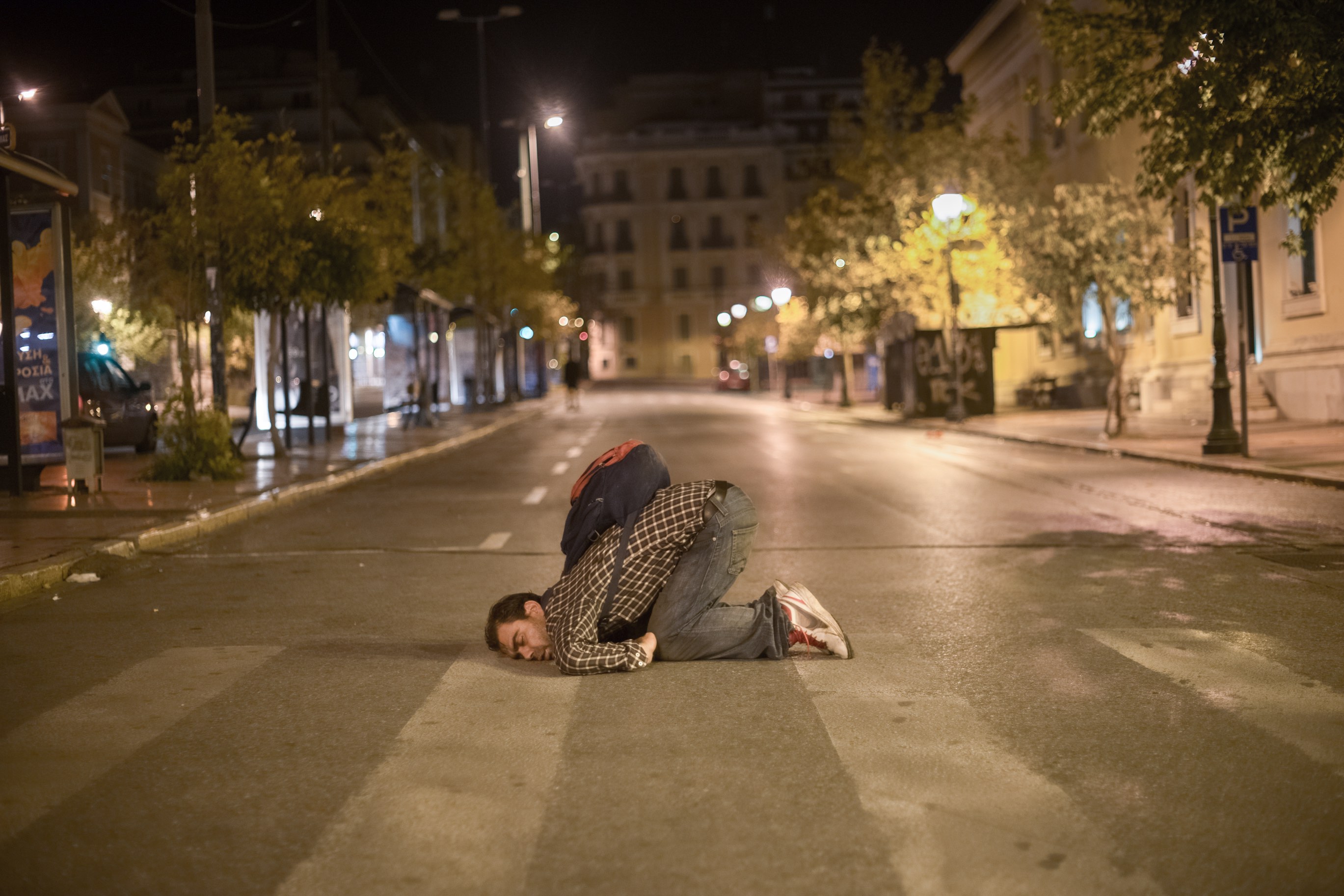 Seasons changed, but the international journalistic community stayed; Greece had become the centre European of the ‘refugee crisis’.  As more and more people began to document the refugees’ perilous odyssey to Greece, the stark orange lifejackets against the darkness of the sea became almost the stock image to depict it. But, for me, another image cut right to core of their migration to Greece.

Greek documentary photographer, Dimitris Lambridis, captured the striking redness of a woman’s headscarf as she sits alone, lit up by the lights of that ancient city, Athens. 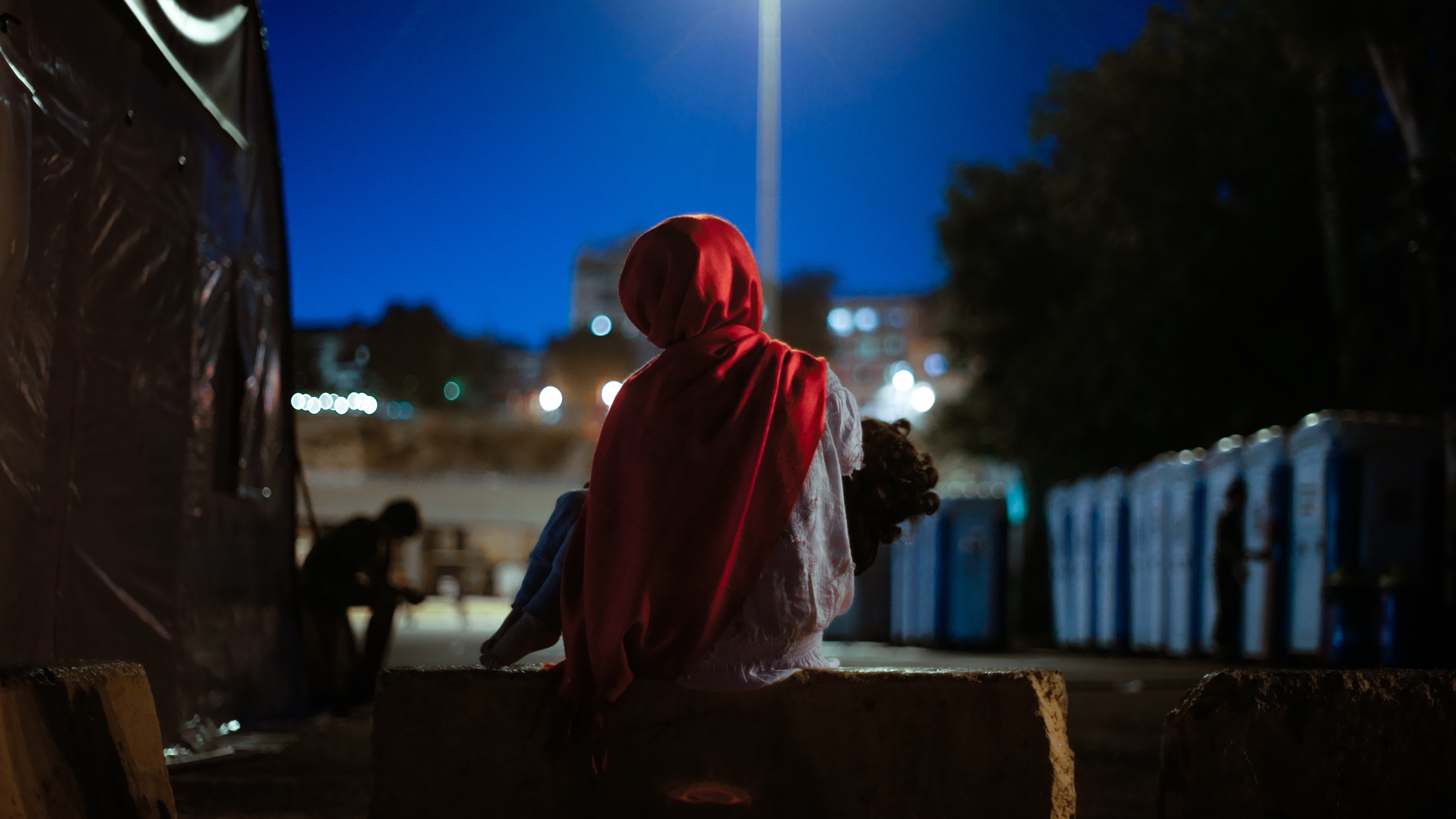 At first, you hardly notice the silhouette of the child that she cradles in her lap. Solitarily, she sits waiting, waiting for something to change. The slowness of the image documents the reality of being a refugee when the borders are closing around you, leaving you lost, bored and alone in a new place. 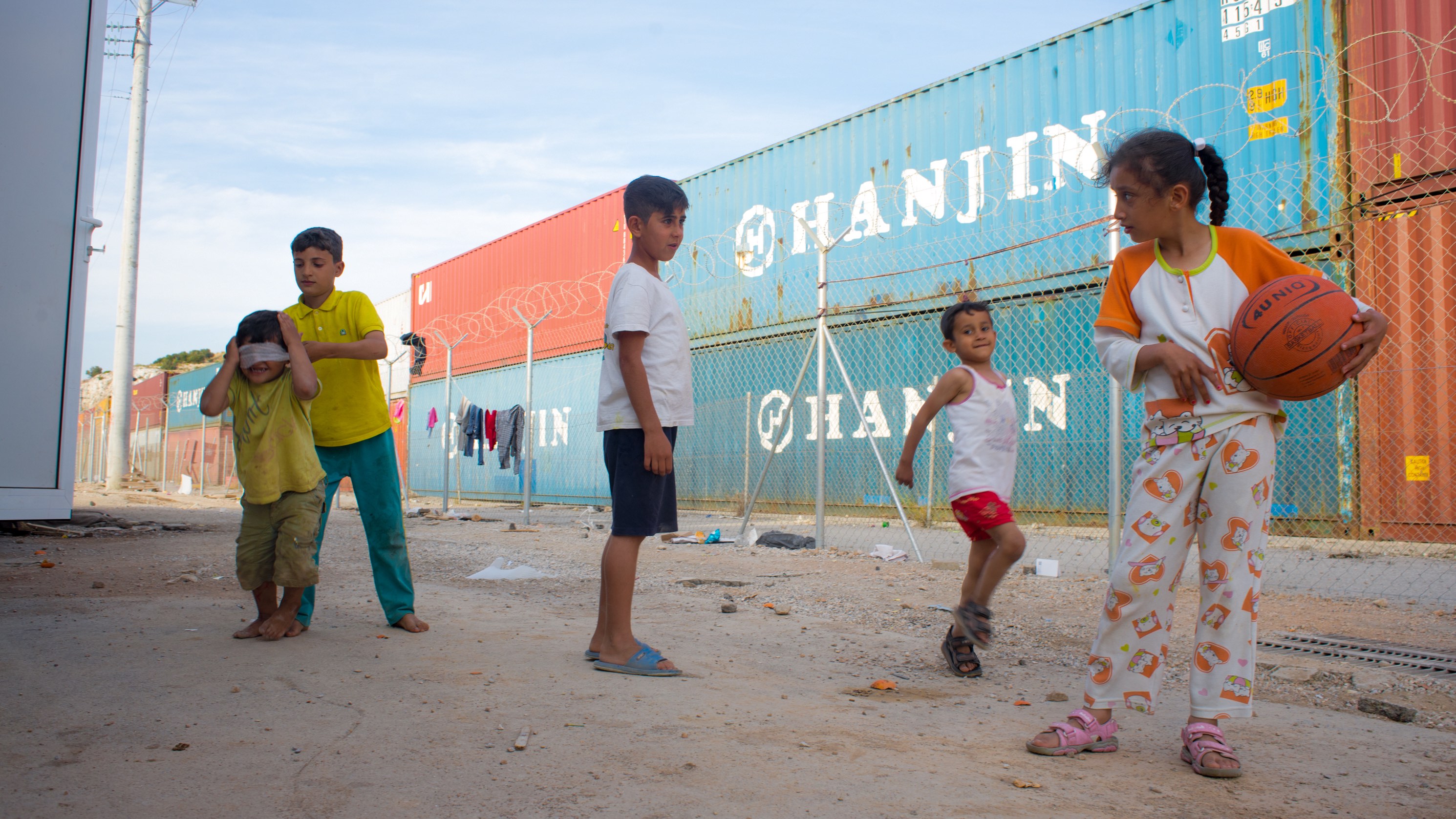 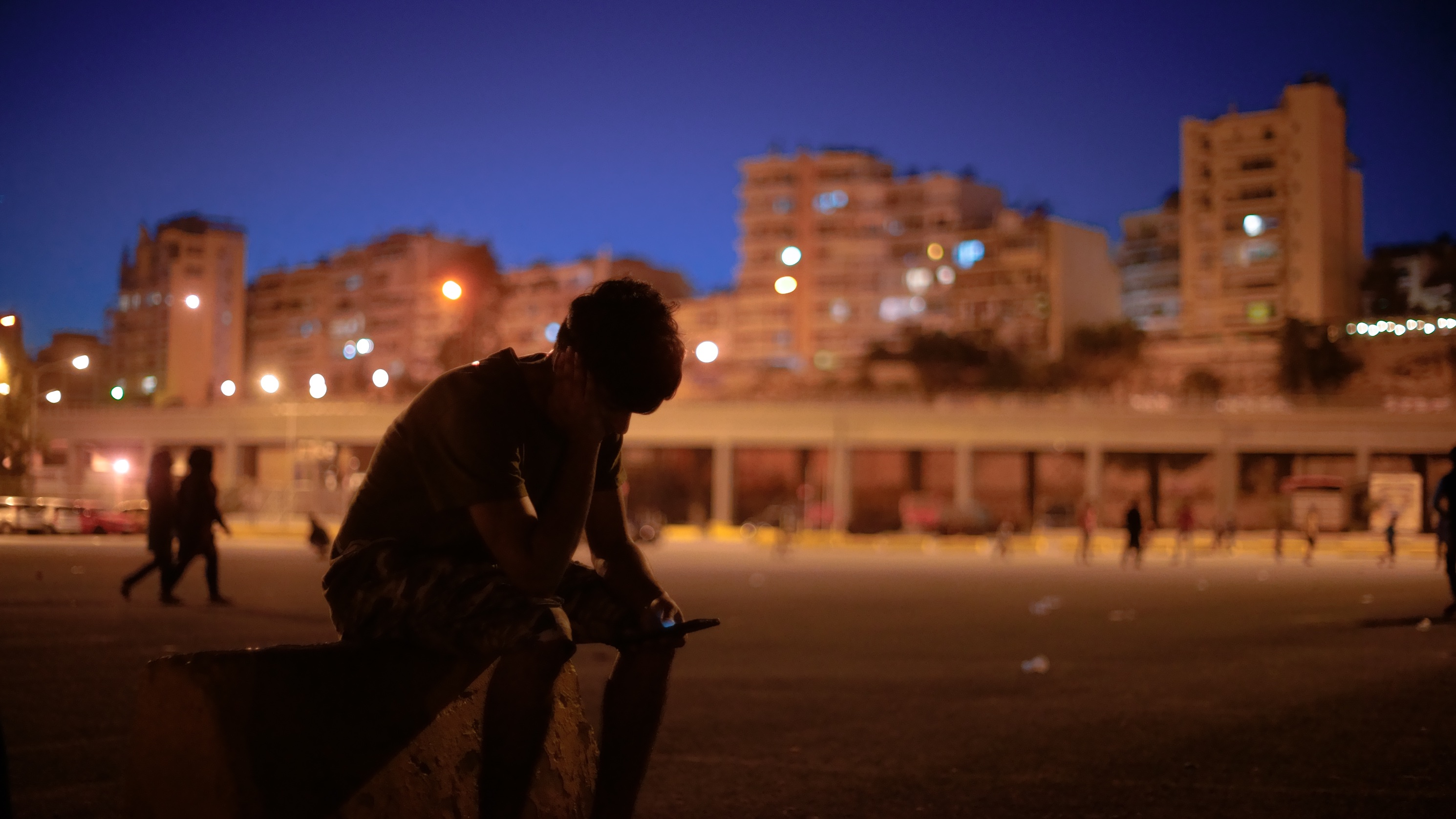 Through his eye for light, Lambridis can sense a mood in the stillest of moments. In one of his images, a refugee named Ahmed, pulls his hands up engulfing his face in shadows as he cries. While the viewer can quickly understand what is happening, it affords his subject some privacy in a personal moment. After acknowledging the sensitivity of this image, the question was posed to Lambridis as to whether there had been a time when he felt that he shouldn’t have his camera out. 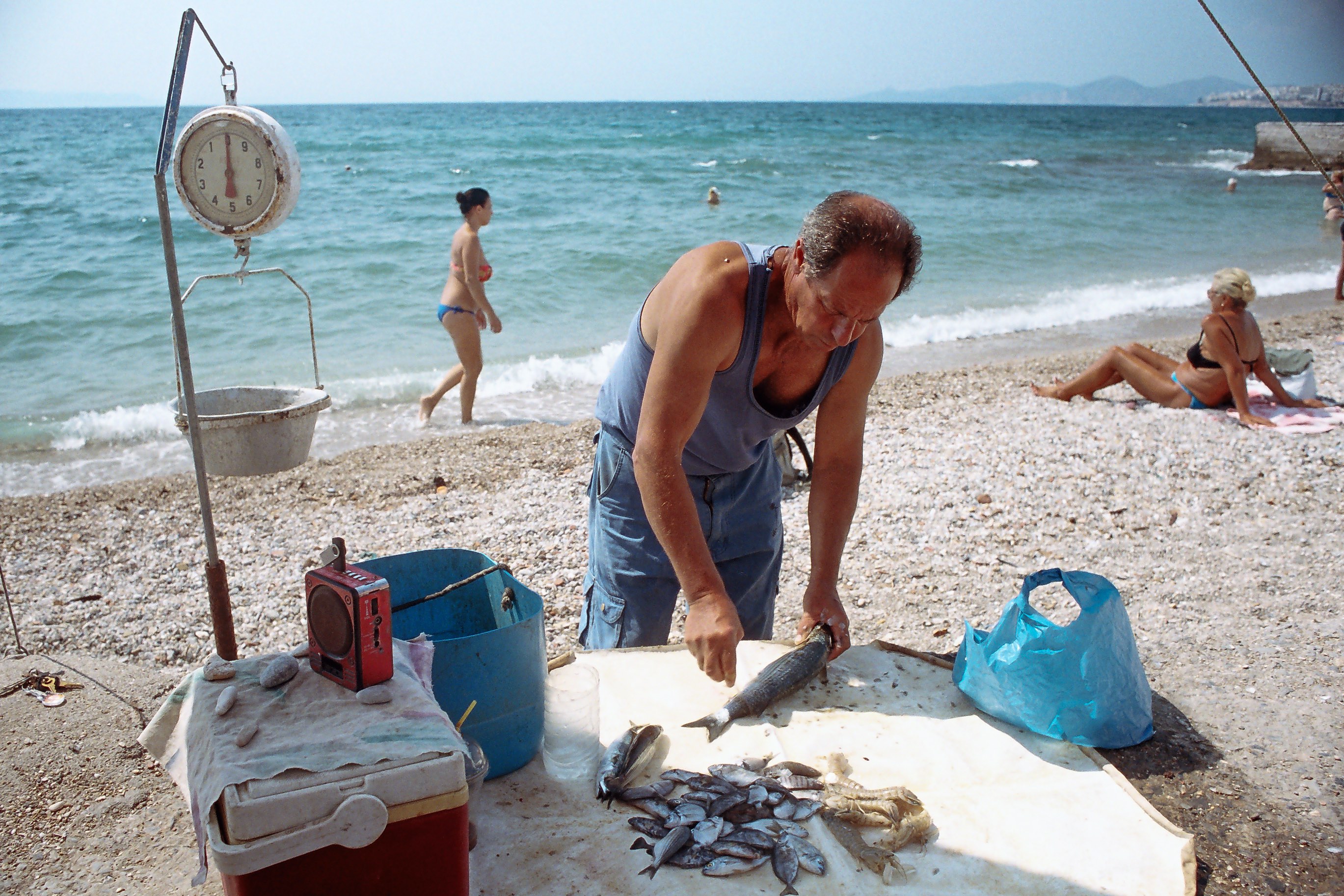 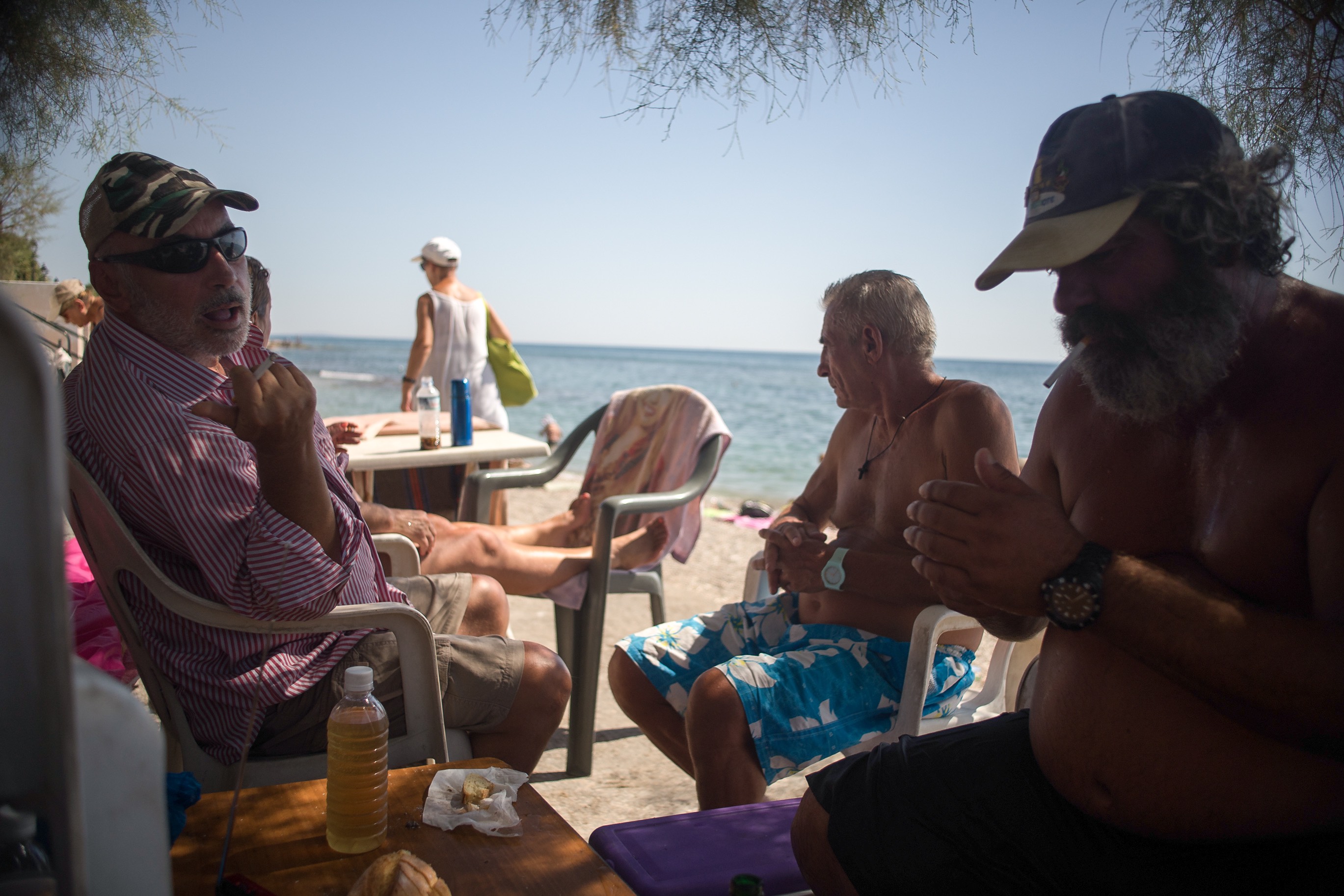 According to Lambridis, this is an intuition that documentarians gradually develop over time. But there is one image that raised questions for him. From his collections shot in Greece, he captured a man slumped completely passed out, on his knees outside of the Athenian Law School; an area where drug addicts can generally be found. But after shooting the photo he picked up the man and placed him in a bus stop chair as he felt it would be “morally wrong to leave him there”. 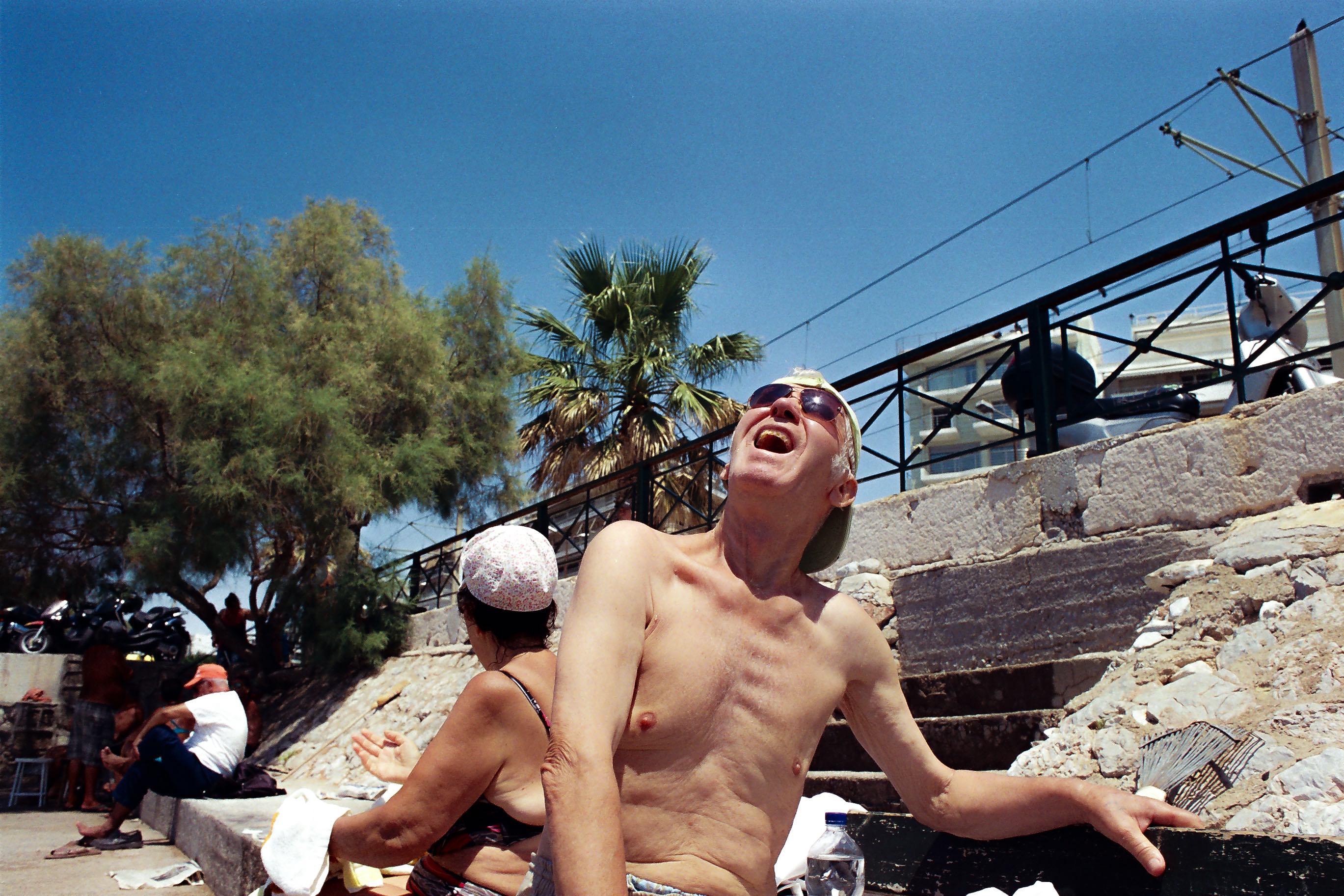 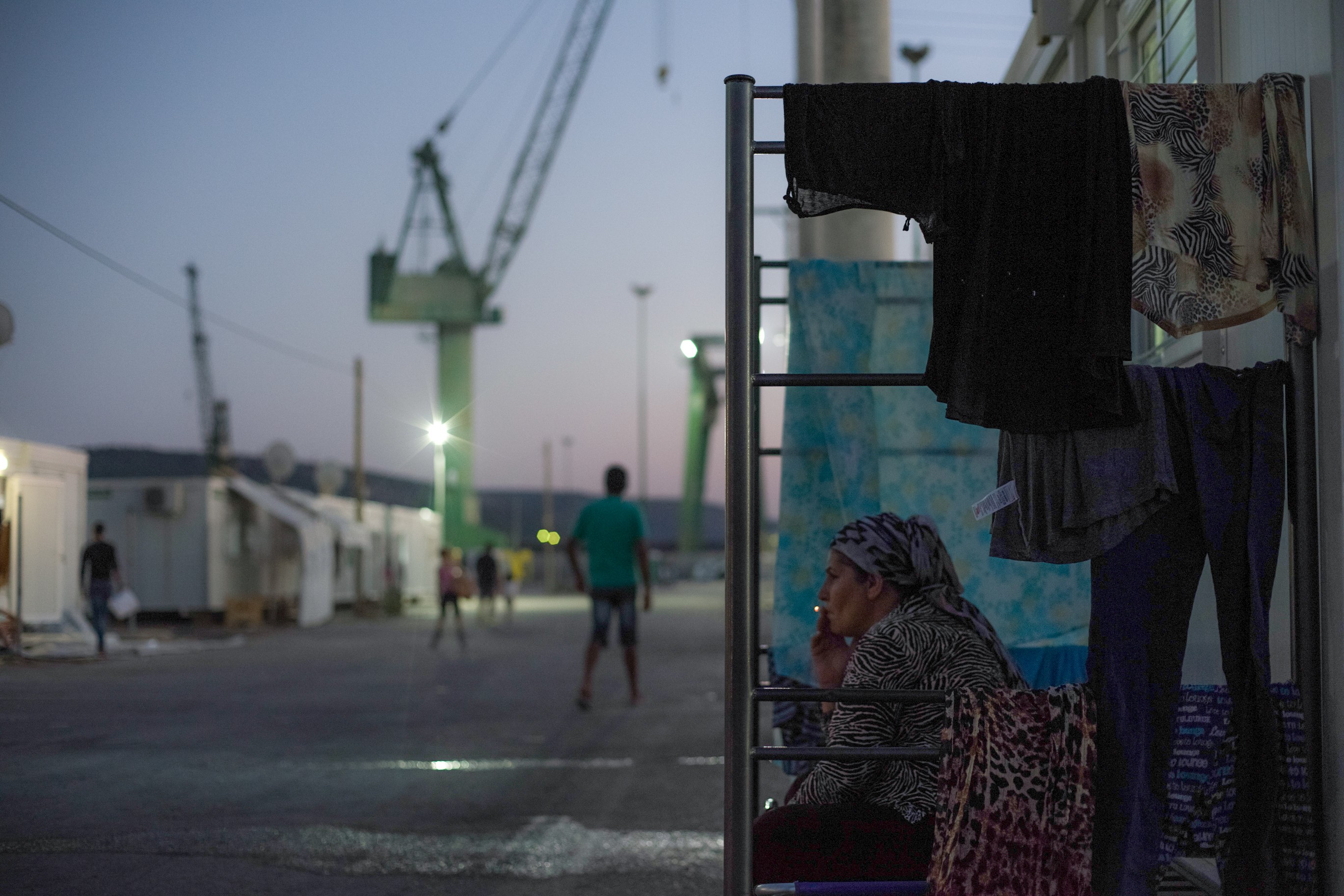 However, what is most appealing about Lambridis’ photography of Greece is his fondness for the people “who experienced the good days of Greece in the late 20th century”. This has led him to follow the longstanding traditions of his culture: people enjoying the sea, fishermen and religion. Although he acknowledges the change and suffering that families experience, he likes to focus on the things that have not altered, despite the financial crisis, as it shows the adaptability and resilience of the Greek people. 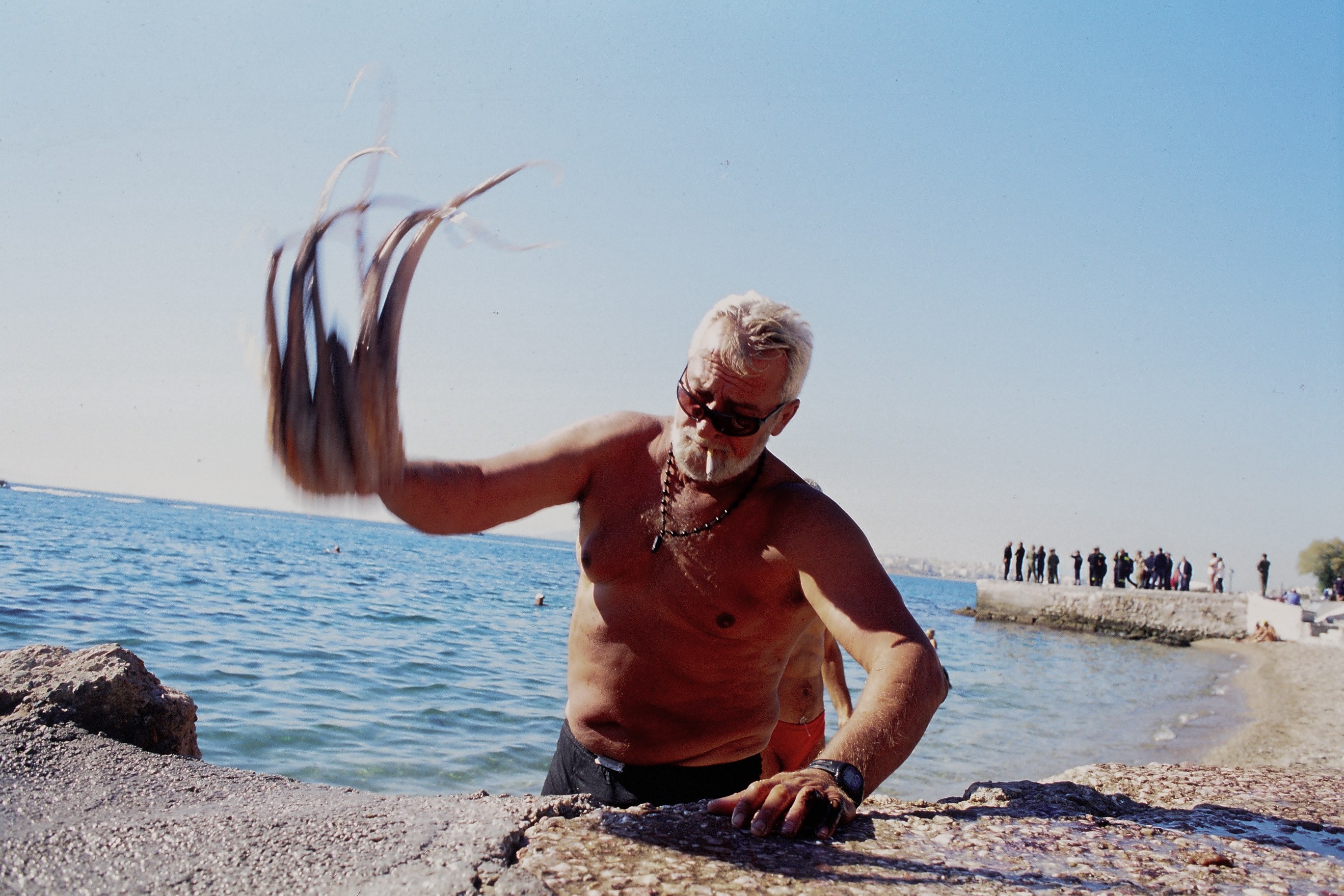 In one of these photographs, a man now gold thanks to many years in the bright Greek sun, swiftly moves to slam down an octopus. This sense of ease, and appreciation, around water is certainly a theme that runs through many of Lambridis photos of Athens.

When placed next to his photos of the refugee crisis, the sea is still present. In an almost directly comparable motion, a young refugee precariously leans off the edge of a port throwing a crate back into waves. In both the images, there is shared comfort with the water. Neither subject appears unfamiliar. Placed in conjunction with one another, these photos provide a sense of coherence as their subjects are united through their relationship to the coastline. 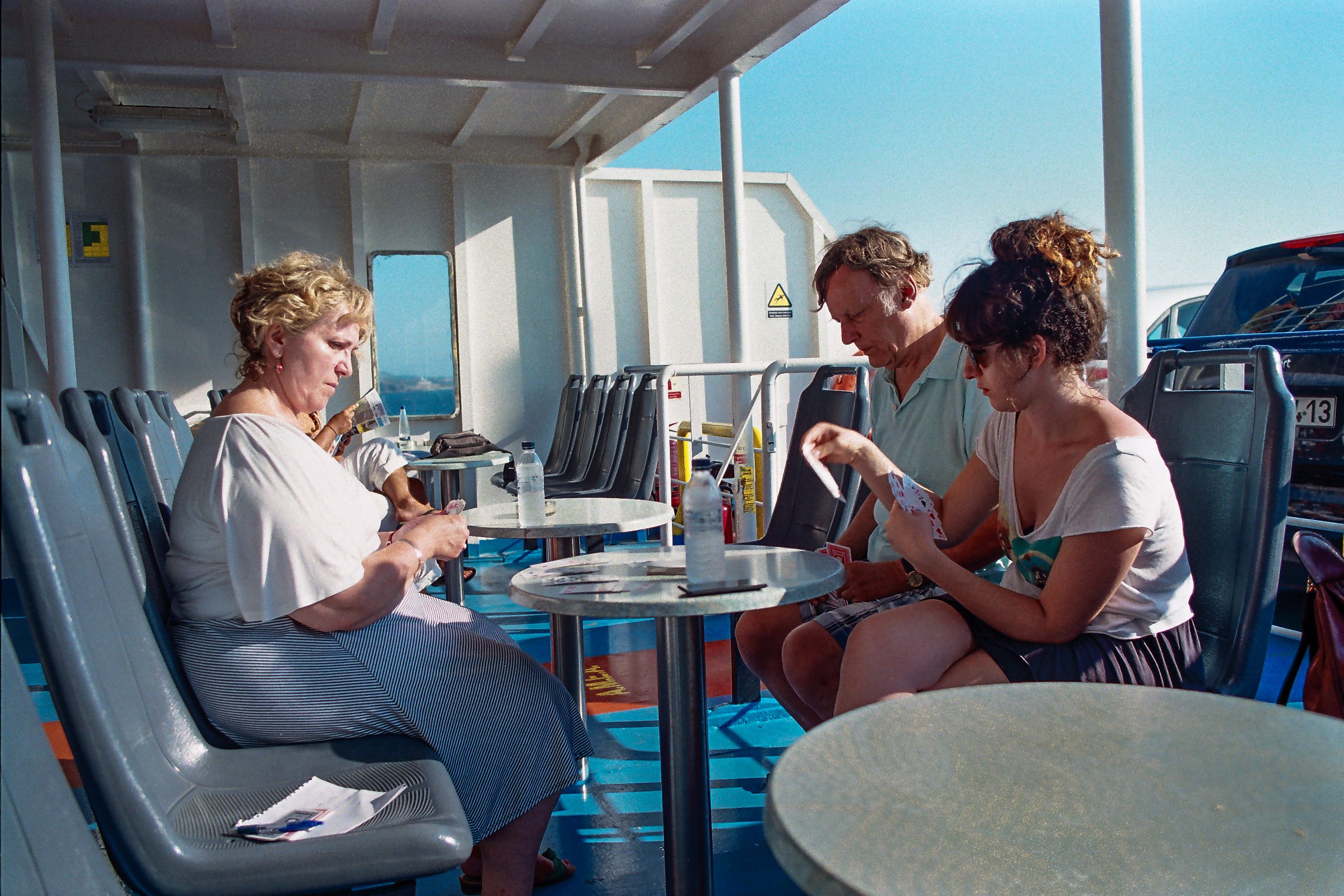 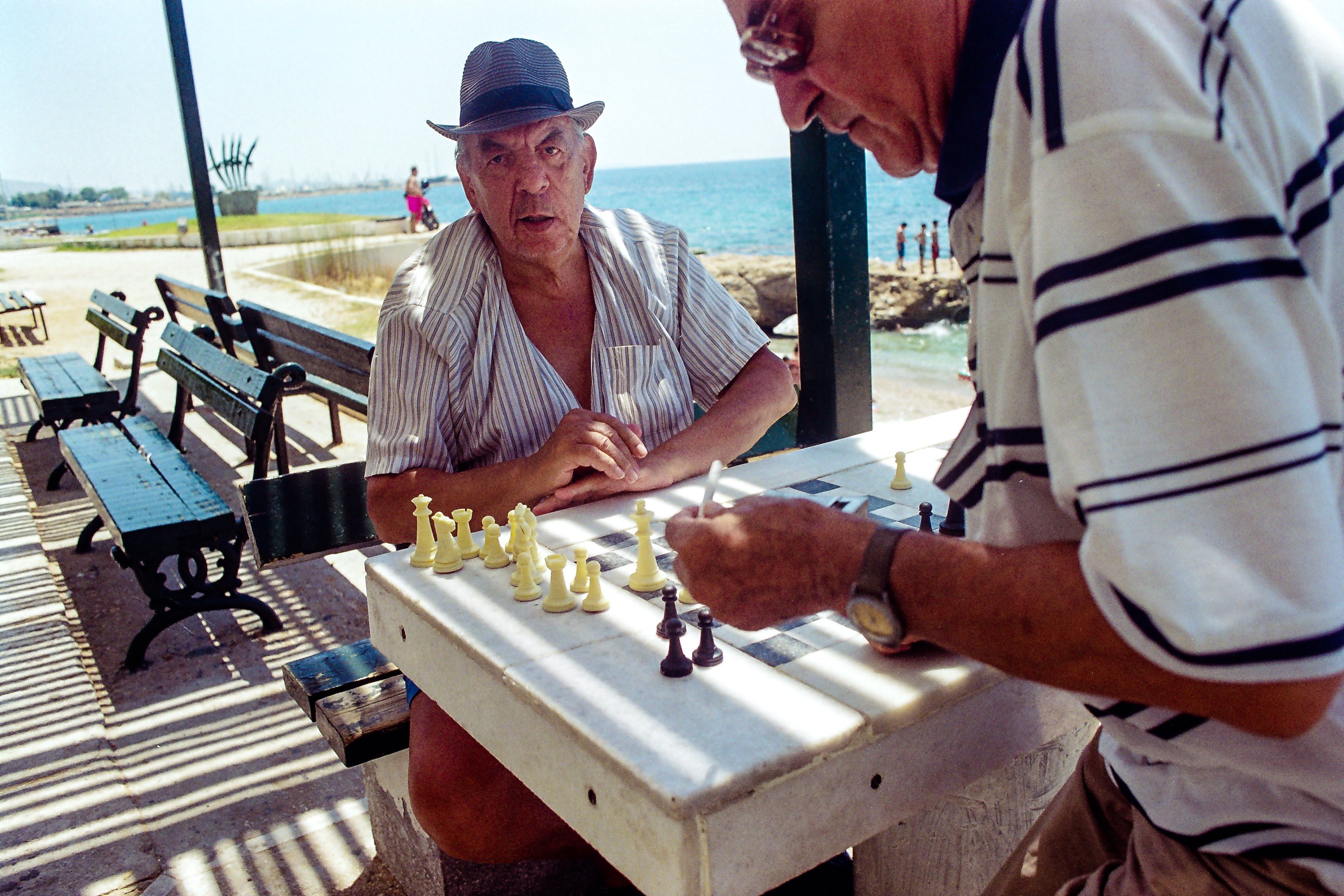 Through a thematic consideration of his work, Lambridis provides a sense of reliability between people who might otherwise believe they have little in common. For him, “that is the psychological part. This sense of unity is where people can relate.”

“In some way, most families in Greece have what could be seen as a ‘refugee’ background or have lived through the dictatorship which was not too long ago. While the old can be worried, scared an resentful, others are still struggling to understand what is going on here. So, relatability is essential. It prevents people adopting a defensive attitude and allows people to connect and help one another.”

Linkedin
RELATED ARTICLES
OTHER ARTICLES
Photographer Becky Tyrell went down to the fading banger and stock raceway to meet a community desperate to keep it alive.
As she gears up for the release of her first book, the 24-year-old climate activist talks standing up to authority and building a more inclusive movement.
Photographer Sean Maung reflects on documenting a small town in Pennsylvania afflicted by high levels of unemployment, poverty, violence, crime, and addiction.
Social prescribing connects people with non-medical support to improve their health and wellbeing – but some experts worry it’s just a stick plaster solution.
AI companies that develop image-generators using copyrighted artwork from the internet are coming under fire from artists who say that it amounts to theft.
Filmmaker Laura Poitras discusses her new documentary which traces the remarkable life of the artist-activist and the impact of her battle against the US opioid crisis.