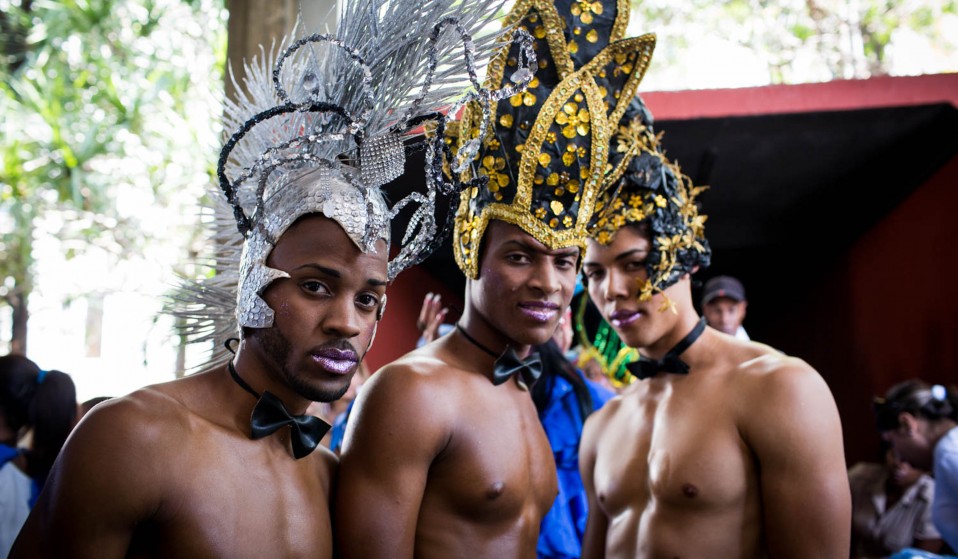 Cuban American photojournalist Lisette Poole has been shooting in Cuba for years, working closely with the LGBT community. We spoke to her about her work documenting Havana's queer scene.

Photojournalist Lisette Poole first visited Cuba aged 15, and has been fascinated by the island ever since. Her Cuban mother left for American aged 12, and though she was grateful to have spent most of her life in the U.S., she never forgot Cuba and talked about it every day.  “I felt strongly connected to being Cuban”, says Lisette,  “my grandmother, who passed away last year, was also deeply connected to the island and constantly nostalgic for it. She was “Cuban” before she was anything else.”

When Lisette developed a passion for journalism in college, she felt something pulling her back. “I knew there were lots of undiscovered stories, and that there was something missing in the media portrayal of Cuba,” she explains, and she needed to tell those stories. Now splitting her time between the U.S. and Cuba, Lisette works on longterm documentary photography projects, working closely with Cuba’s LGBT community. We chatted to Listette about the Cuban scene, the life of a photographer in Cuba today, and the changes that are taking place on the island. 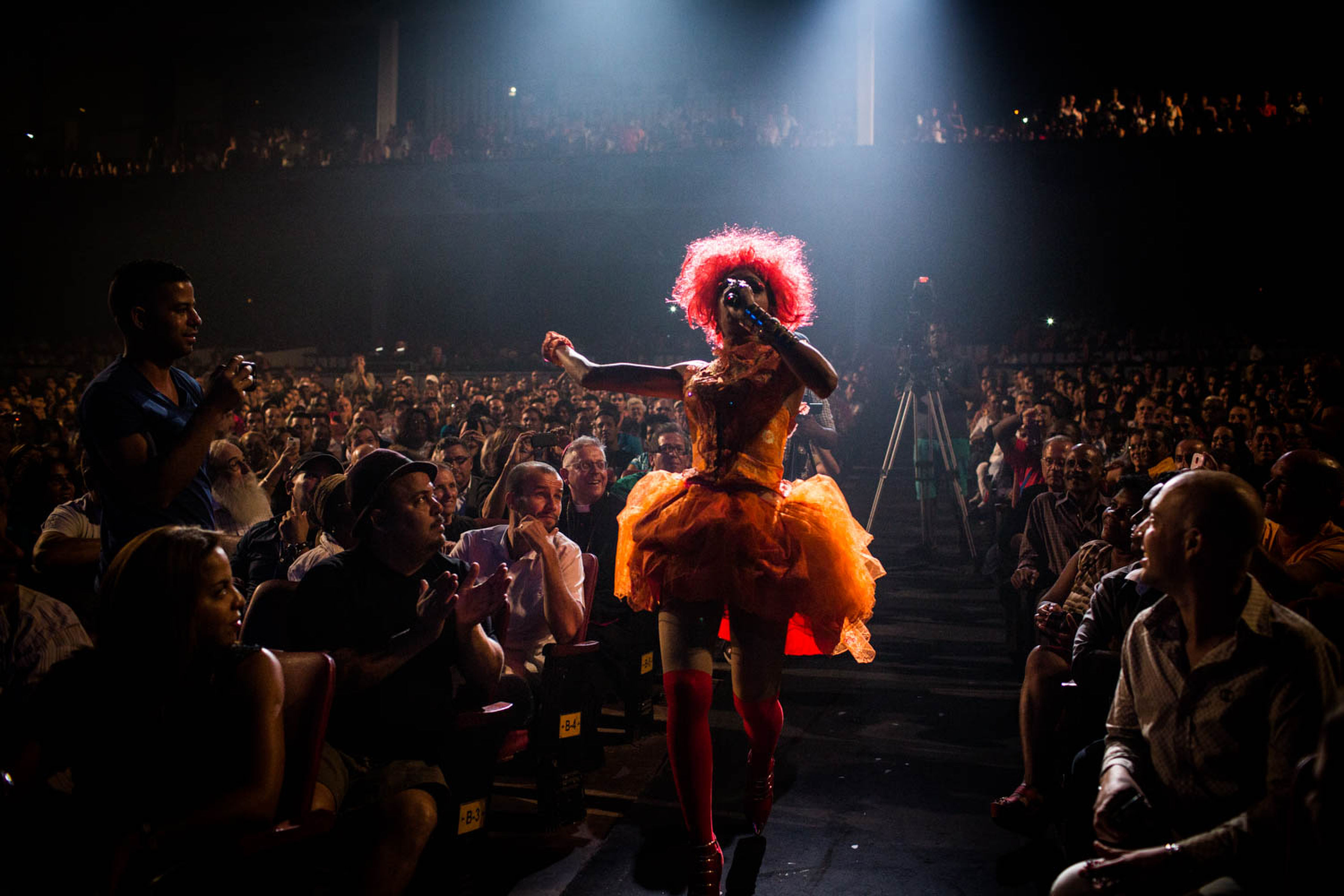 What was it that got you working with the LGBT community in Cuba?

It all started when I was working on a project about beauty in Cuba. I was living with a couple who took me out to the newly-legal gay clubs in Havana, and I met a performer one night.  She’s a trans activist and actress in Cuba, and I’ve been following her for almost two years now.  I became inspired by the community, and was shooting so much that I got to a point where I felt at home on the scene.

What’s life like for LGBT people in Cuba today?

Cuba under Fidel Castro has a long history of oppression against LGBT people. While same sex relationships were decriminalised in 1979 between consenting adults in private, reform only truly started, and slowly, when Castro admitted in 1993 that his attitudes to LGBT people had been wrong in the past, and he apologised. Real change only really took place when Mariela Castro became an active campaigner for LGBT rights. As Raul Castro’s daughter, people started to listen, and the opening of CENESEX pushed things forward. The first Pride Week (known as Anti Homophobia celebrations) didn’t take place until 2013. 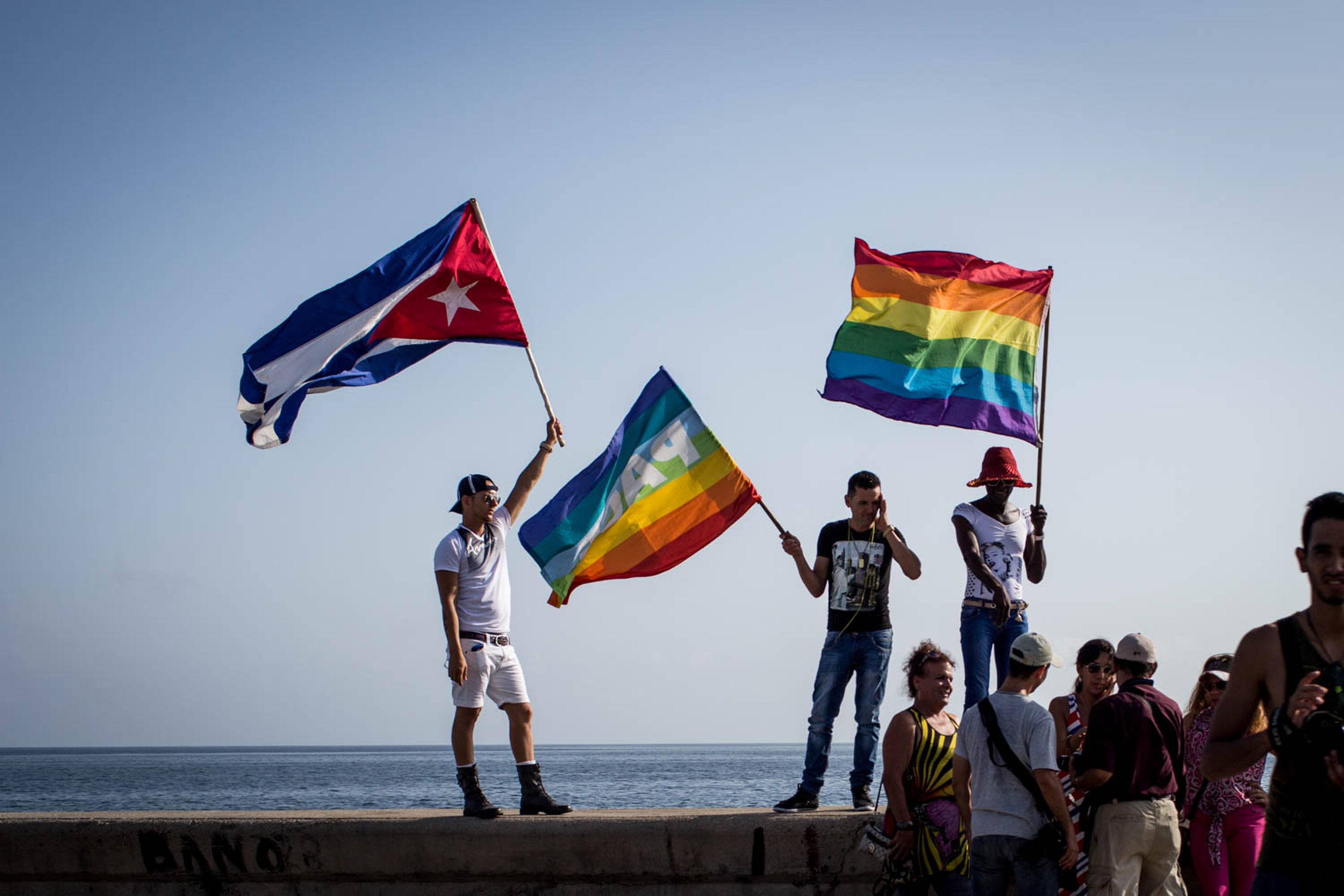 Who are the characters you’ve focussed on and how has your relationship with them developed?

At this point the people in my projects have become like family to me. When you work with someone a long time, things start to change, there is a reciprocity to the relationship. I’ve come to know many organizers in the community and they trust me. I never really thought that I would be covering an LGBT community anywhere, but I ended up falling into this because I found a group of people who were fun, inspiring and accepting. They wanted me to tell their story and welcomed me in. 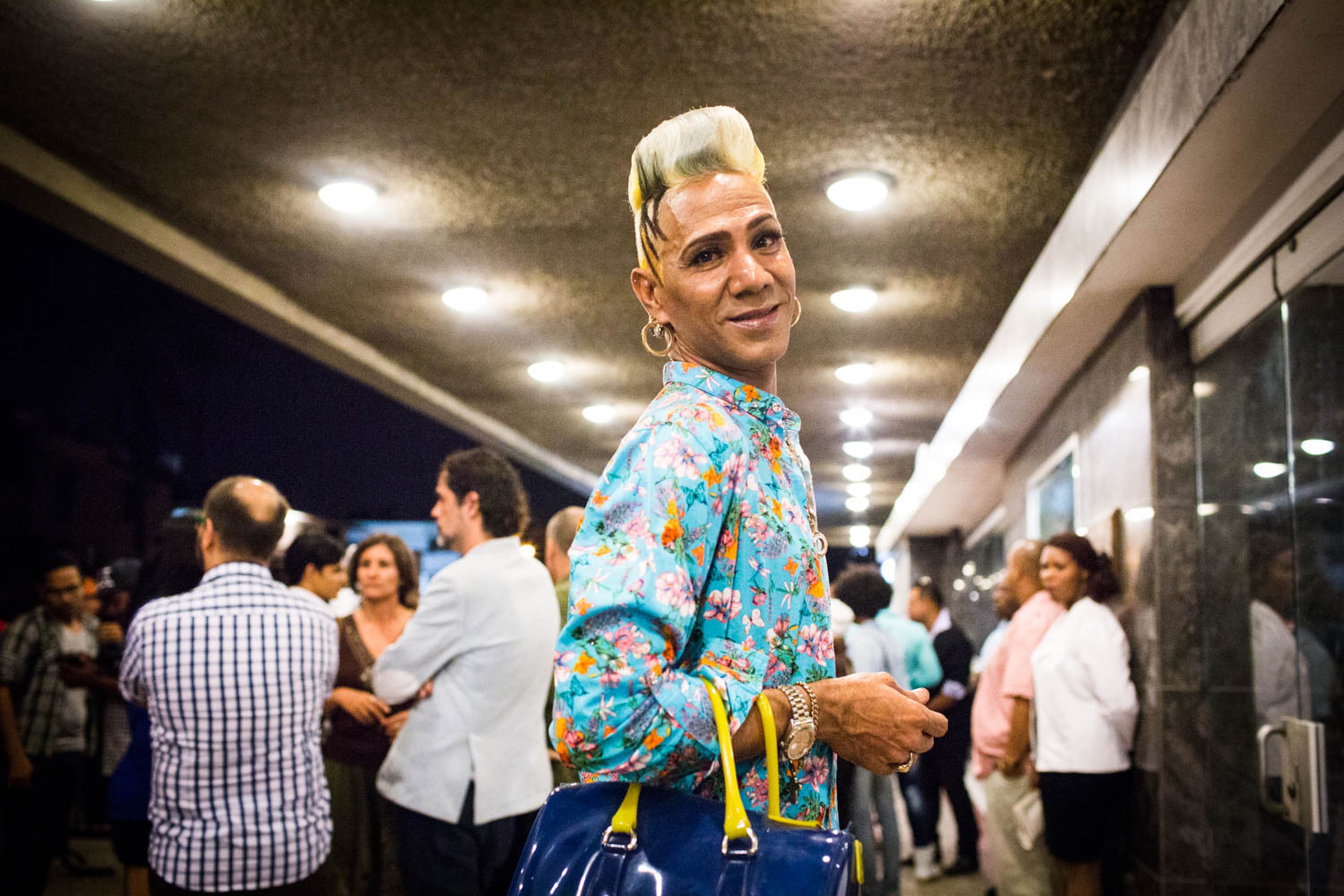 Do you think social attitudes are becoming more liberal along with the economic liberalisation of the island?

I would definitely say that in the past few years there has been an opening and acceptance. Though some members of the LGBT community comment that they felt their only freedoms were relegated to the nightlife scene, in many ways this has begun to spread throughout many parts of society. There’s still a long way to go.

The thing is, Cuban people are very open with their beliefs – and unfortunately sometimes their prejudices – but there is also a very strong sense of community and bond here, and I think this makes the biggest difference. When I’m shooting Kiriam, a trans woman in Havana, her neighbours and family would sometimes call her by her male name, but she would tell me that the genuine love and acceptance they express overrides that. 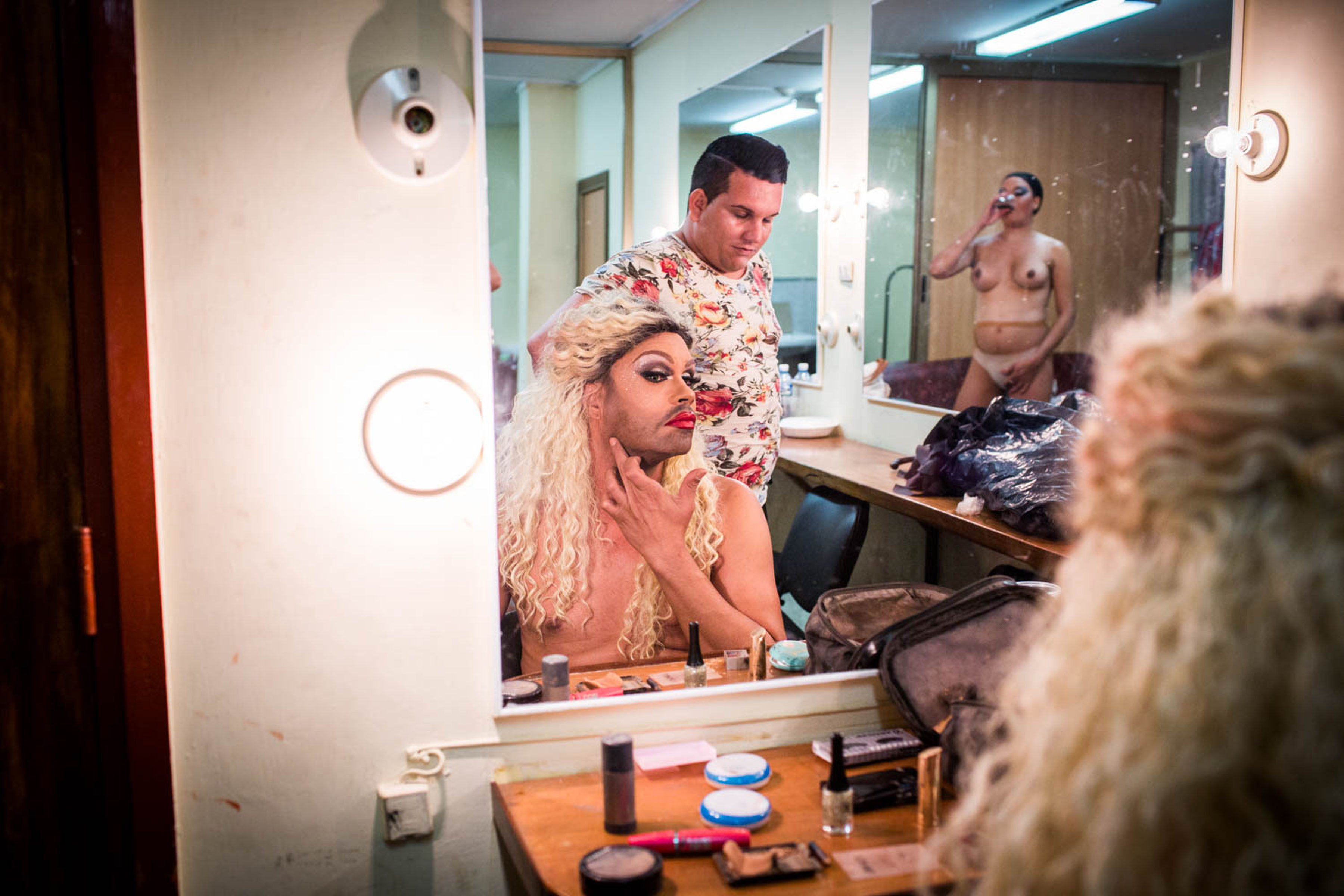 Performer Abraham Bueno Garcia, 42, known as Imperio, is one of Cuba’s most famous “transformista” or drag performers.

How has photography changed the way you see Cuba?

I think as a photographer I’ve been forced me to look at Cuba in a new way. There’s so much here to see, people living their lives out and about, in ways that’s hidden from sight to Americans. It’s amazing to me to see, the posture, the interactions, the rituals of Cubans. I look for visual representations of people who are empowered and strong. I’m just constantly looking at Cuba this way, sometimes it’s difficult to switch off the journalist in me. 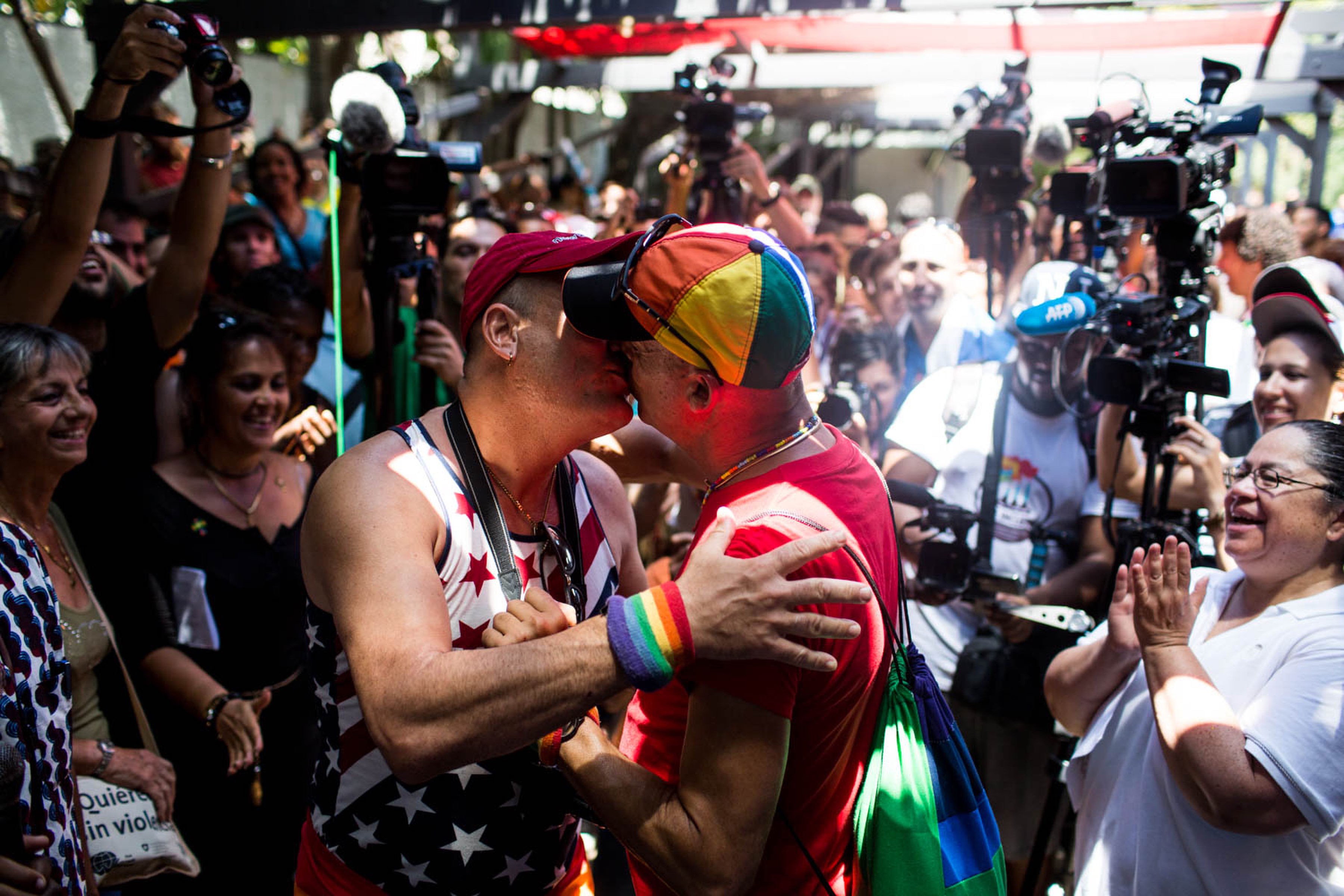 All over Latin America have come to bless unofficial same-sex marriages.

What’s life like as a photographer in Cuba right now?

Lately most of my time is spent just hanging out! The social currency of spending time together is more important than anything else in Cuba. I’m developing a series of stories, and most of my time is spent hanging with my subjects or sources, developing friendships with them, and becoming part of their lives. I’m surrounded by the daily grind in Cuba known as “La Lucha,”my hope is this allows me to get past the surface of Cuba and sink into fresh ideas and stories that unlock a little of the mystery about this place.

Other than that, I’m with my family, or hunting for a good meal and the scarce internet. 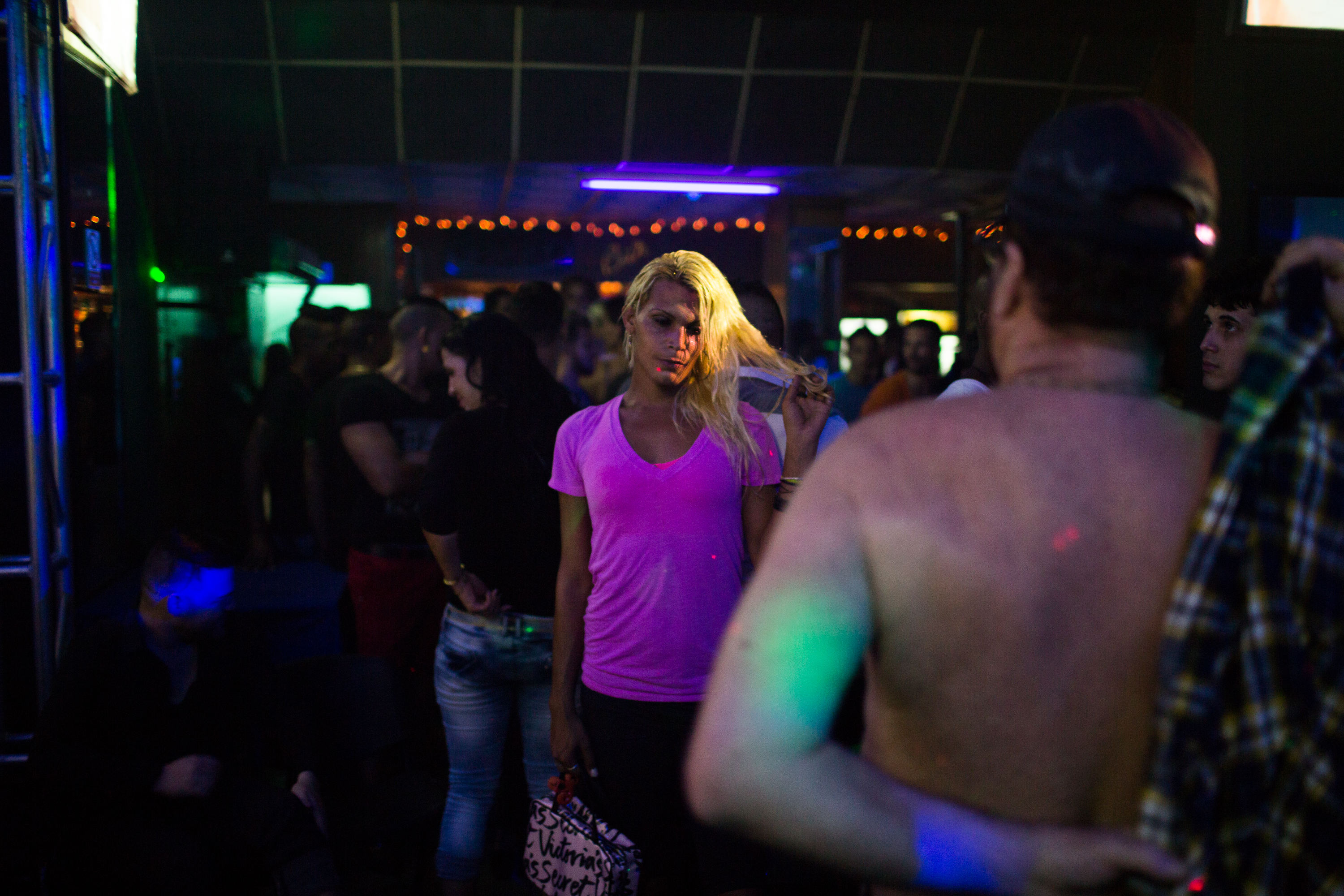 Victoria, 27, a trans woman with her American boyfriend at Karabali

How do you primarily see yourself in Cuba – as a photographer, as a Cuban-American, a young woman?

My place in Cuba is definitely as a journalist. My family circumstances brought me here at first, and my sense of curiosity drew me back several times, but it’s my journalism that’s kept me returning. I saw a long time ago that things were changing here. I would talk to editors about my work, and the response I got was often the same: “Cuba, its not interesting, yet”. A lot of people were waiting for Fidel to die, but I knew that it was important to be here. 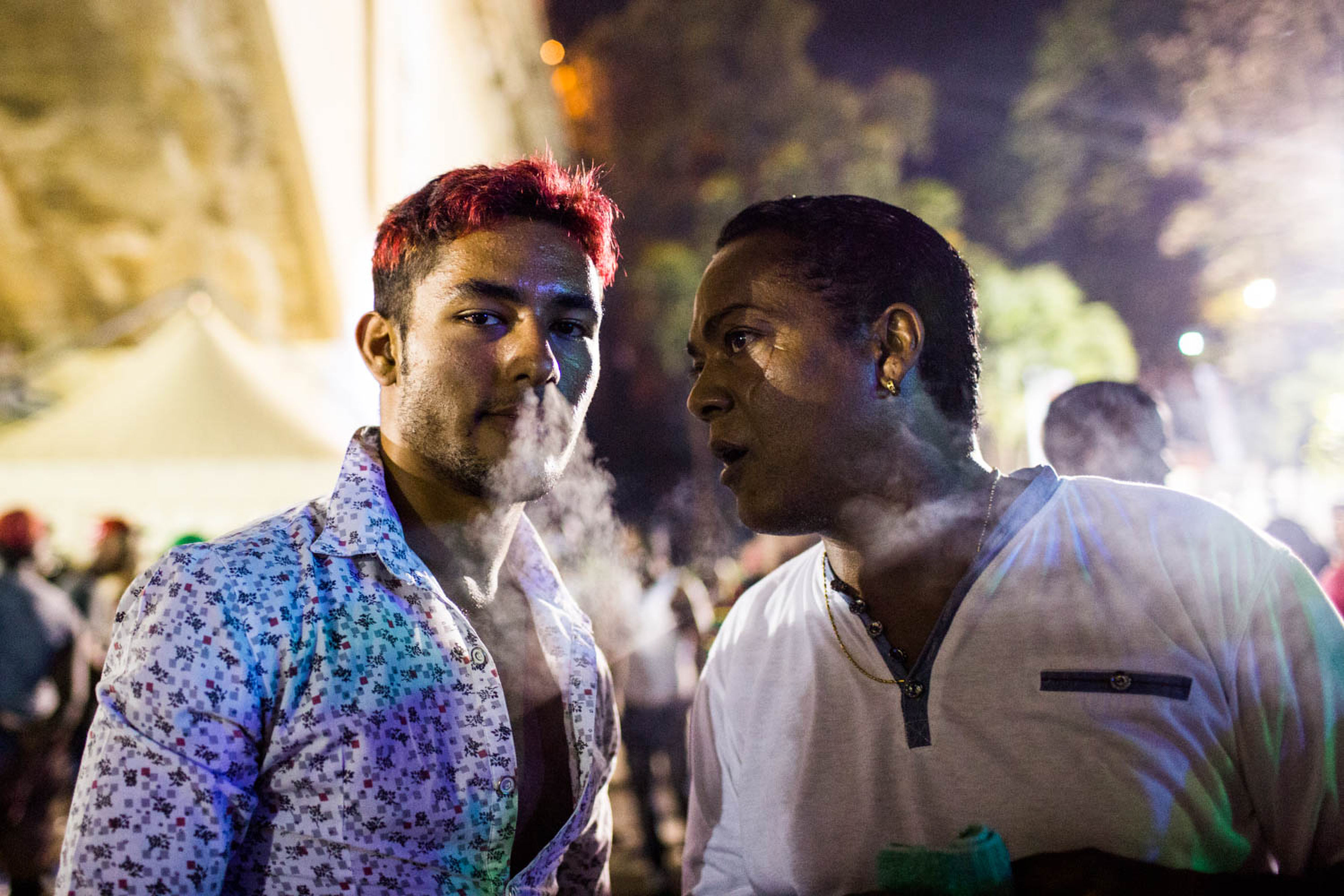 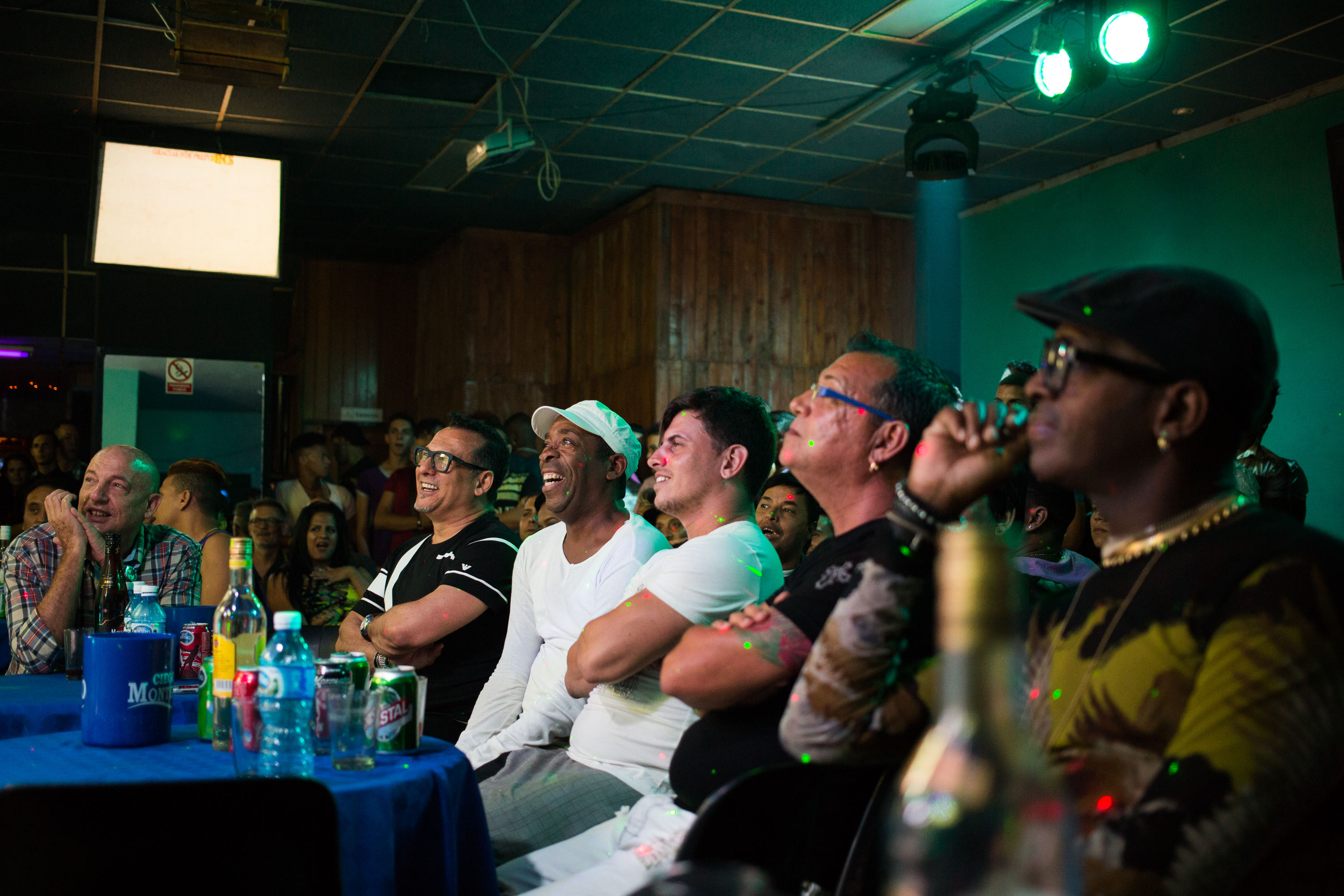 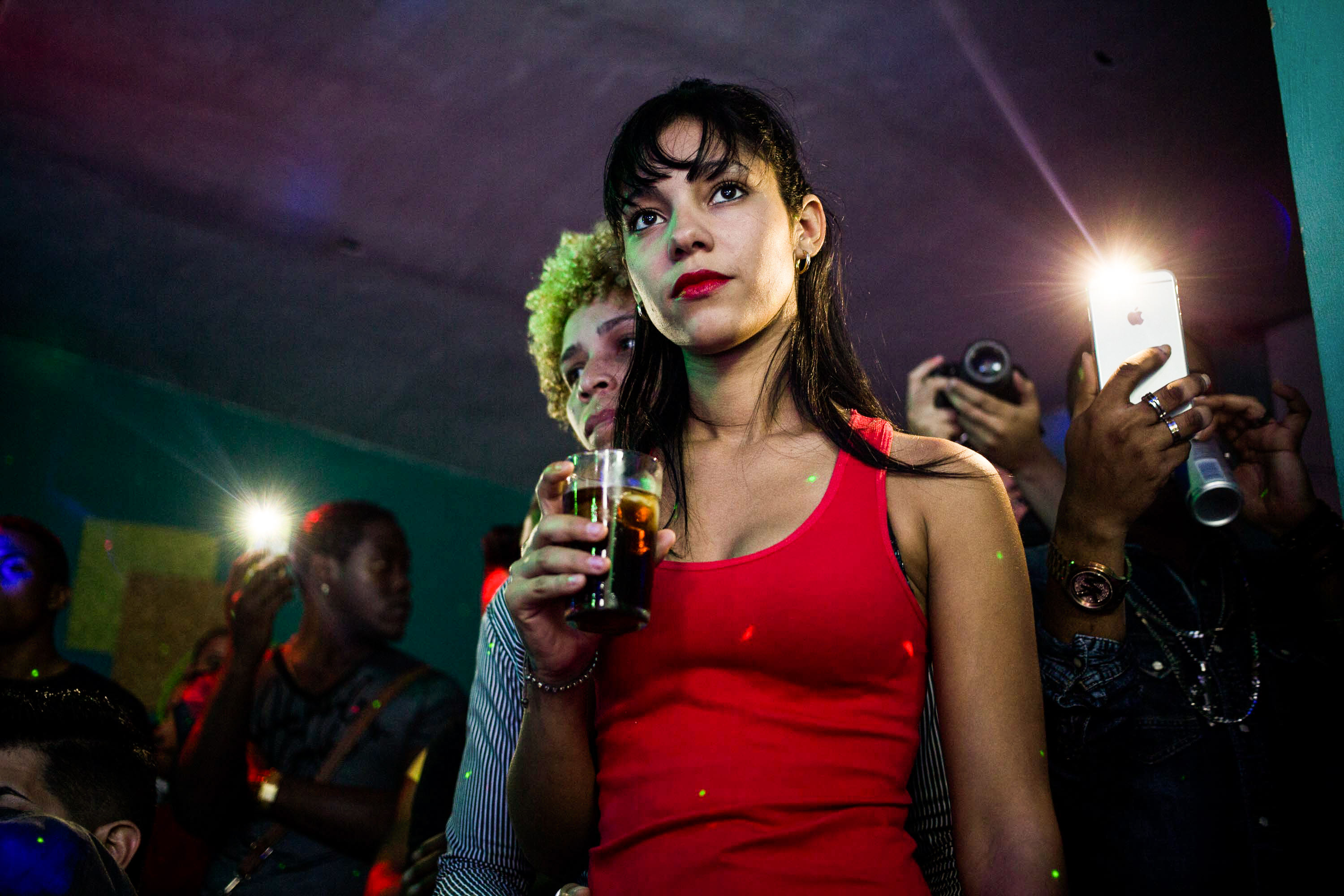 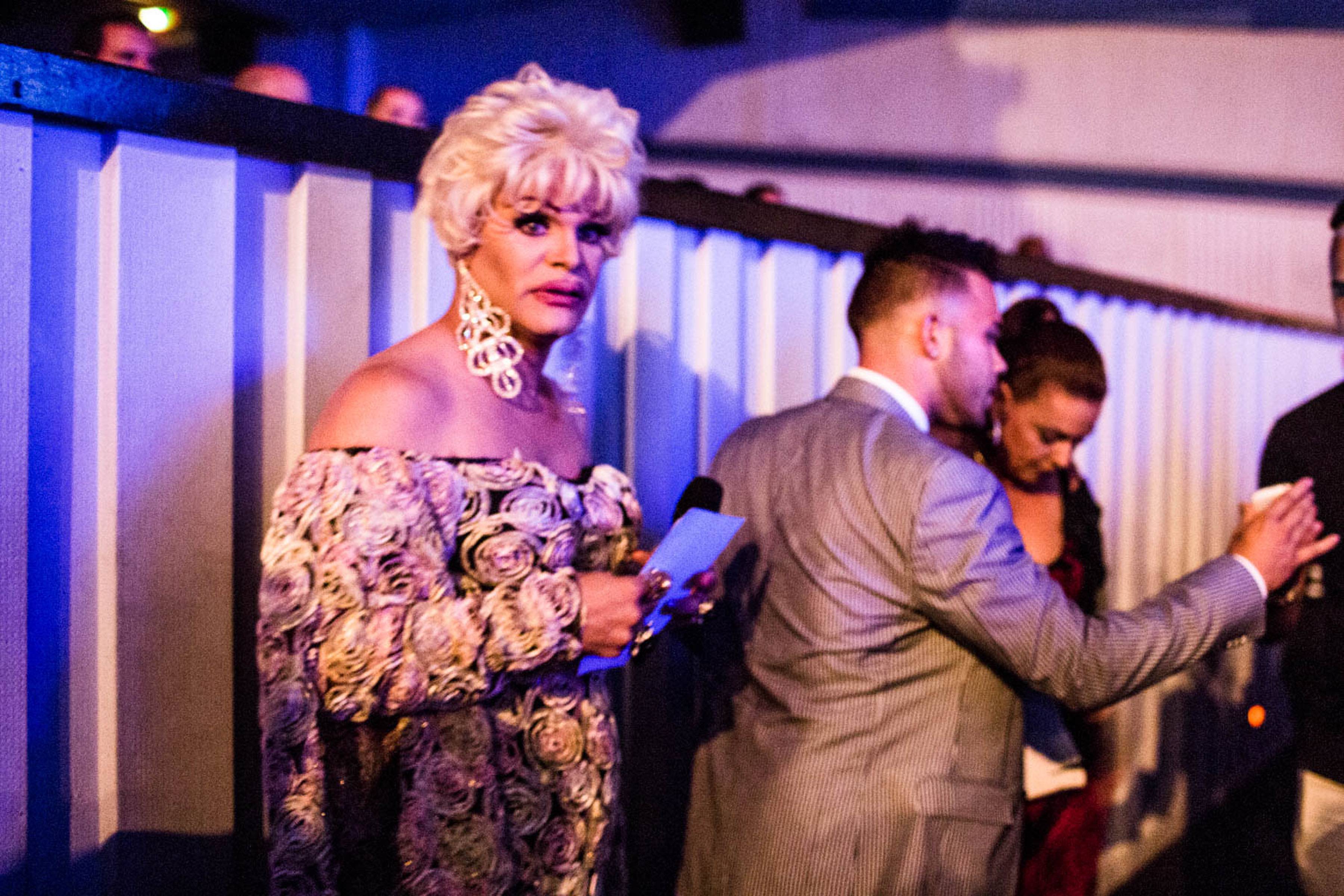 You can see more of Lisette Poole’s work here on her website, or check out her Instagram.

Linkedin
RELATED ARTICLES
OTHER ARTICLES
Photographer Alice Mann reflects on capturing the camaraderie and discipline it takes to succeed in a highly-competitive sport.
While the Colston 4 verdict is worth celebrating, it‘s debatable whether the law would’ve had such empathy for Black people in the same position.
Leading art critic Robert Storr reflects on the photographers – from Seydou Keïta, to Malick Sidibé, to Carrie Mae Weems – who helped to transform and redefine the medium.
As the role of the nuclear family is increasingly called into question, people are finding new ways to exist outside heterosexist norms.
The rapper talks injecting humour and fun into his sound and challenging drill stereotypes.
In Glasgow, life expectancy is reduced by 15 per cent. In a new project, photographer Kirsty Mackay reflects on the lives cut short.