Art & Culture / ‘I shot Tupac and chilled with Thom Yorke’

Photographer Danny Clinch reveals the stories behind some of music's most iconic moments.

Danny Clinch has captured some of music's most iconic moments, from downtime with the Beastie Boys to cataloguing Bruce Springsteen's never-ending ride. These are the stories behind his favourite stills.

Danny Clinch scoops me up at the Toms River Bus Terminal, New Jersey, a short distance from where he grew up and still lives today. He’s likely the only guy in this blue-collar town sporting a fedora and Western boots.

It’s a fitting look for a rock photojournalist who’s images have made the covers and pages of Vanity Fair, Rolling Stone and The New York Times.

Clinch is a storyteller – traditionally through his photos, shooting everyone from Beastie Boys to Johnny Cash over a career that saw him go from sneaking into concerts without a press pass to interning with Annie Liebovitz.

Video work has been his storytelling medium of choice, having directed live concert films with the Foo Fighters, Jay-Z, Dispatch, Ani DiFranco and Ben Harper and also acting as the creative force behind Pearl Jam’s ‘Lightning Bolt’ video.

He’s a storyteller on this grey December morning, too, as we head to Three on the Tree Productions, his studio in Hell’s Kitchen where he’s wrapping up his third book, Still Moving, for release later this year.

“As I’m looking through the photos with my editor and designer, I’m showing them why I like each one. Occasionally, they just say to me, ‘You know what? That’s a good photo. But the story is better,’” Clinch says, navigating the Garden State Parkway.

The visual rock journalist started with a thousand photos and is down to the nitty gritty, having emerged from a process he likens to choosing his favourite child.

For as much thought and care as he puts into his work, he’s found that the spontaneous moments are often his favourites, like when he spotted Thom Yorke sitting in a circular window in a Dublin Hotel, winding down after a show and chatting with friends.

“Sometimes there are these found moments,” he smiles. “You walk in and there’s a photograph right there – the real moments that happen. I tend to gravitate towards those.”

As we exit the Lincoln Tunnel, Clinch points out that we made the drive in an hour and 15 minutes exactly; he has a thing for well-executed missions into Manhattan. And in those 75 minutes, Clinch shares the backstories behind a few of his favourite shots.

A STUDY IN CONTRAST 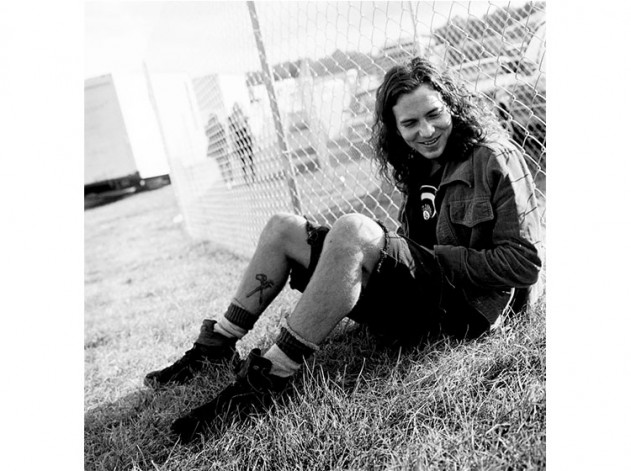 “I’m going to start with this Eddie Vedder photo I took in 1992 at Waterloo Village. It was early in my career and I went to Lollapalooza with a friend of mine, Tim Donnelly, who was asked to do a story about Eddie for the Surfrider Foundation. [Pearl Jam’s debut album] Ten had come out the year before, but it had blown up that summer.

“I brought my camera, as I did everywhere back then. I didn’t have any access to anyone and Tim said, ‘Why don’t you roll with me when I do this interview. He’s a super cool guy, and maybe we get some photos.’ We weren’t allowed backstage, but Eddie came to hang out with us. So we walked around and found a quiet spot behind this trailer and sat down by this fence. We were telling stories. Timmy was talking surf and Eddie was telling us about the kinds of activism he does around the surfing community.

“The interesting thing for me was that it was really early in my career. And to meet someone who was so incredibly humble was amazing. Then, next thing we know, we’re in the pit, among everybody and this really quiet, humble guy who had just been telling us stories is climbing up the scaffolding, screaming at the top of his lungs and throwing himself all over the place. The contrast between the guy on the stage and the guy we had just talked to is something I will never forget.” 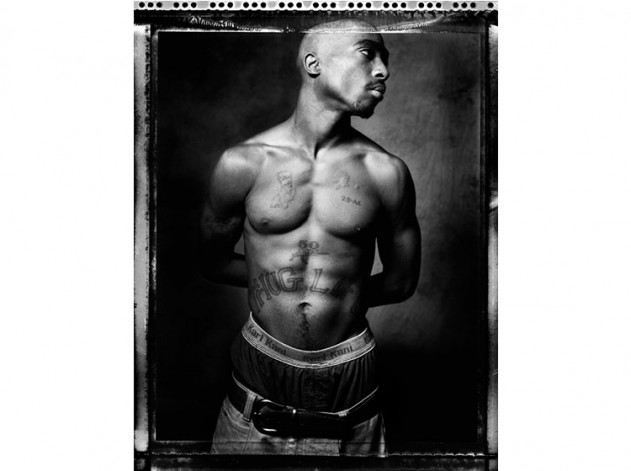 “There’s a session that everybody always asks me about with Tupac Shakur in 1993. I shot a lot of hip hop back in the day and there was always a really big entourage if you were doing an album packaging or editorial. It was always a lot of people – way more than necessary.

“Then I got the assignment from Rolling Stone to shoot Tupac. And I was excited about it, really excited about getting a Rolling Stone shoot. Even though they told me the photo was only going to run over a quarter-page, I was envisioning a Rolling Stone cover. At the time, I was not only doing really loose, documentary-style photography I had also taken this old 4×5 camera, which is a very slow portrait-style camera. So I decided to really concentrate on that.

“So Tupac shows up – with just one guy. And he was really excited about being photographed. He was really professional. He showed up on time, ready to go, and had bought a couple of different shirts and a Thug Life jacket. We got started shooting a few photographs. He was really intrigued by this big old-view camera where you put the hood over your head and you get in there. It’s a slow process. He was super photogenic and the camera loved him.

“At one point he said, ‘Let me change it up,’ and he took his shirt off and you could see all his tattoos – the Thug Life tattoo and the scars on his chest. I don’t think I would have ever asked him to take off his shirt. Collaboration can be a small part of a session, but it can really make a big difference, and he was really into it. So we started to shoot with the shirt off, which for me, became the epic photo. They ran the photo as a quarter-page. Then three years later, he’s killed and that photo wound up on the cover of Rolling Stone.”

IN GOOD WITH THE BOSS 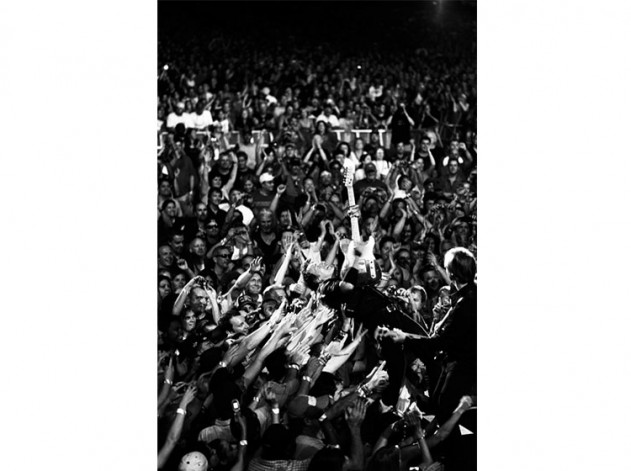 “Being from New Jersey, I have to give you a Bruce Springsteen story. I started shooting Springsteen in 1999 – officially. I had photographed him a bunch before that because I snuck my camera in anywhere I could. I never got the classic Stone Pony shots until later on. Every time I would hear that Springsteen was going to show up at the Pony [an iconic venue in Asbury Park], I’d go, hide my camera and sneak it in – and sometimes sit through a band I didn’t really want to see.

“But once I started to work with him, I did the photographs for The Rising. I did a film for Devils and Dust and a lot of other album covers – the Seeger Sessions, Working on a Dream, Wrecking Ball and the new one, High Hopes.

“I also go on tour a lot. I love shooting live shows. It’s the moment I think most musicians are gearing up toward. They make the records, they rehearse, but really they just want to let it go on the stage. I want to show respect to the artists, to the stage manager, the tour manager, the guitar techs. The whole thing is about relationships. If somebody tells you, ‘Don’t go here,’ and you go there, you won’t be there next time.

His shows are really long and there are many great photographs to be had. On the Magic Tour, he would always go out to the edge of the stage, lie back into the audience and play his guitar. I just couldn’t find the sweet spot for this particular moment. Bruce is cool about everything. But he doesn’t want to see me when he’s playing. If it’s a quiet song, he doesn’t want to hear a motor drive going off. I mean, who would?

“I behaved myself and stayed out of the way. Then it was the last show of the tour, in Milwaukee, and the only way to get the shot I wanted was to get on the stage. So, before the show, I said to Bruce, ‘You know, I’ve shot a lot of these shows but I’d really like to take it a little further tonight and get more adventurous.’ He was just like, ‘Yeah, go for it – just don’t get in my way.’

“So I waited for the last bit of the show and knew when my moment was. Sure enough, he goes to the end of the stage, starts jamming on this tune and falls back into the crowd with his guitar pointing to the sky. I run out on the stage, between Gary Talent and Little Steven, and just fire away at this shot and then run back off the stage. It worked out and I couldn’t have gotten it otherwise.

“[Usually] I’ll ask the stage manager or I’ll talk to the band, but in this case, I went straight to the top. If I hadn’t behaved, he wouldn’t have talked to me. Just the fact that I get to talk to Bruce Springsteen is enough for me. There’s an interesting thing about being the young guy and trying to get these opportunities however you can get them, and then building the relationship. The trust is there.”

HARP ON YOUR FRIENDS 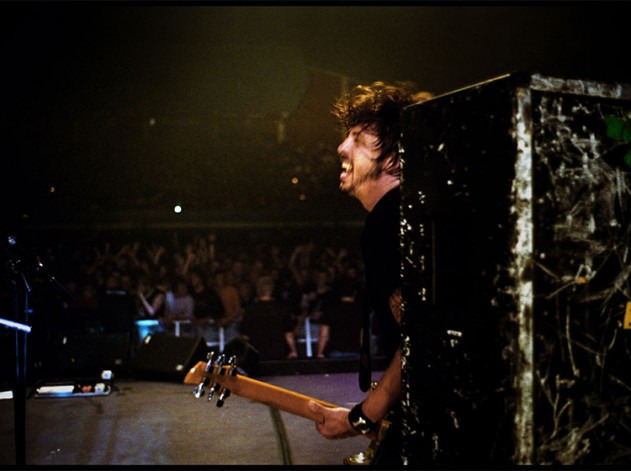 “I was on this European festival tour with the Foo Fighters where they finished up in Iceland with My Morning Jacket. It was a small venue, like a 5,000-seater. Earlier on the tour I had pulled out my harmonica and had a jam with them somewhere on the tour. [Chris] Shiflet and I liked to do a little jam backstage, and they got a kick out of it.

“So that night, Dave [Grohl] said, ‘You should come out and do a song.’ I think we decided on ‘Stacked Actors’. He told me to come out when they did a little breakdown. So, I went out, we did this jam and it was fun. We had a great time. It was super exciting. And at the end, I remember walking off the stage and having Patrick Hallahan and Jim James of My Morning Jacket standing there on deck, like, ‘What was that?! We didn’t know you played the harmonica.’

This story first appeared in Huck 43 – The Boogie Issue. Subscribe today to make sure you don’t miss another issue.

Linkedin
RELATED ARTICLES
OTHER ARTICLES
Minor Threat, The Germs, Dead Kennedys, Black Flag and more.
Huck's annual celebration of visual storytelling is back.
A bunch of funny, sad and surreal music docs that all turn the notch up to eleven.
In Huck 43, we wander London with street photographer Boogie and steal a peek through his gritty lens on life.