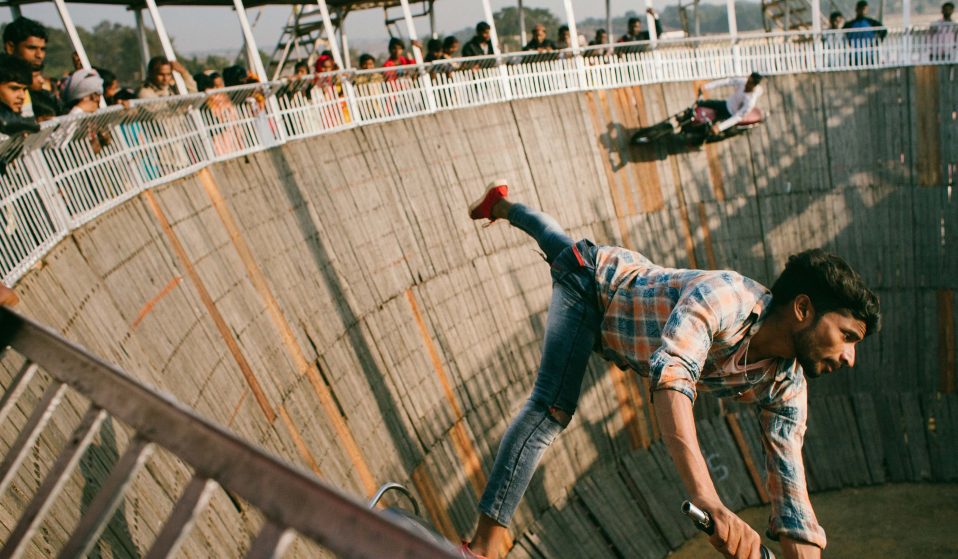 Welcome to the Death Well: a gravity-defying display of fearlessness that reimagines what’s possible on a two-wheeled machine.

In Jharkhand state, a group of Indian riders are keeping a dying tradition alive. Welcome to the Death Well: a gravity-defying display of fearlessness that reimagines what’s possible on a two-wheeled machine.

The Death Well – known sometimes as the Wall of Death, or Motordrome – is a carnival sideshow in which fearless riders zip around the near-vertical walls of a commanding circular pit.

The practice was popular at fairs and amusement parks in the US and UK during the 20th century. Eventually it made its way to India, where it found a home at carnivals across the country, with performers taking the stunt to terrifying new heights.

Today, few Death Wells are left. One of these remaining sites sits in Dhanbad, a coal-mining district in the state of Jharkhand – far beyond the tourist trail. It was here that photographer Tom D Morgan witnessed the practice in action for the first time. 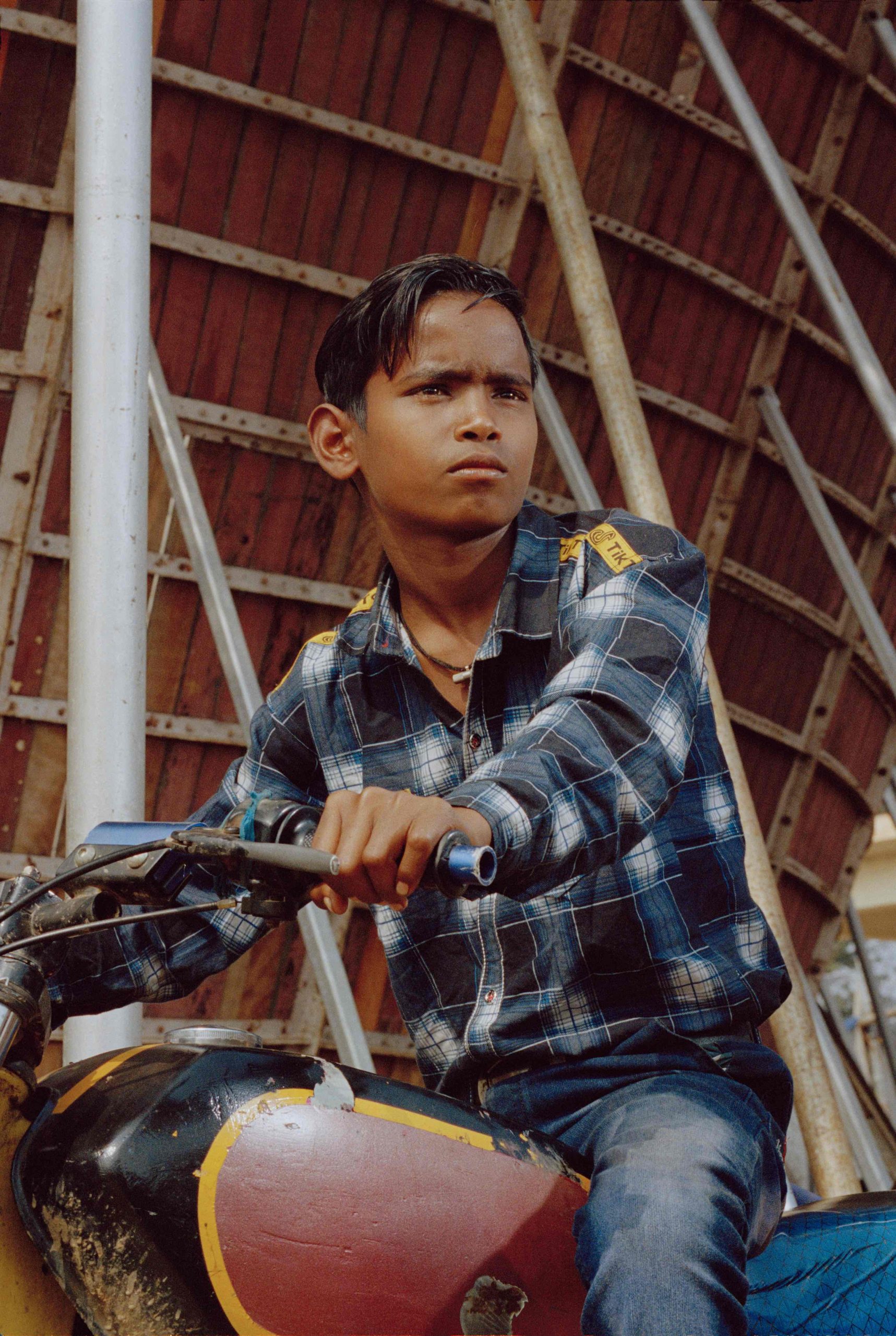 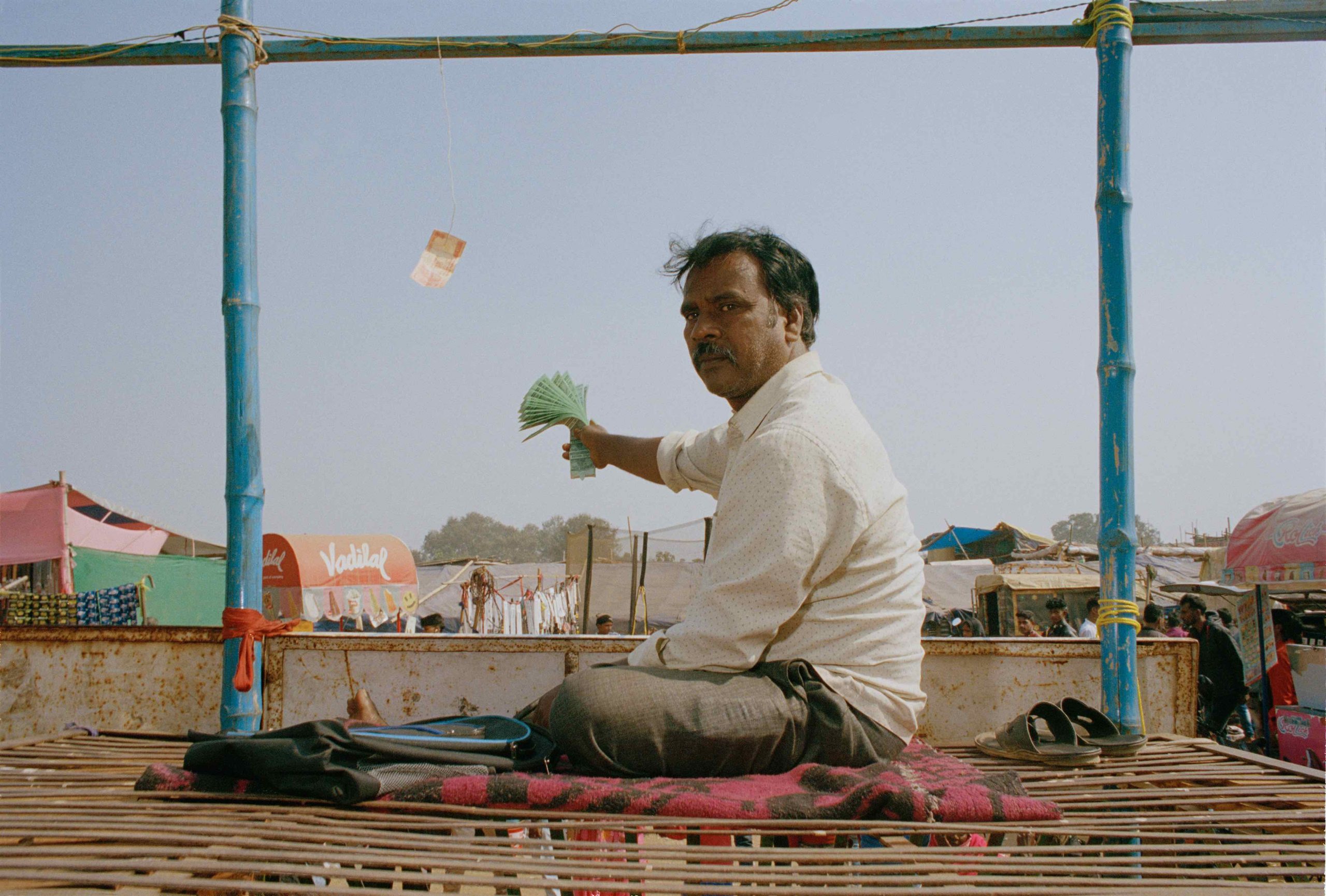 “It’s been said many times before to describe India, but this fairground on the banks of the Damodar River truly was an assault on the senses,” he says.

Morgan remembers immediately being met with the distorted cacophony of several PA speakers – selling everything from tickets to sex shows and illegal gambling rings, to children’s toys and rides on a ferris wheel operated by hand. “I had arrived from the relative tranquility of Manhattan, so it was quite an introduction,” he adds.

He ended up staying for 72 hours, documenting everything the carnival had to offer. It was here that he learned that the riders were stuntmen “by necessity” – for them, it was often a binary choice between becoming a rider, or working in the local mines. 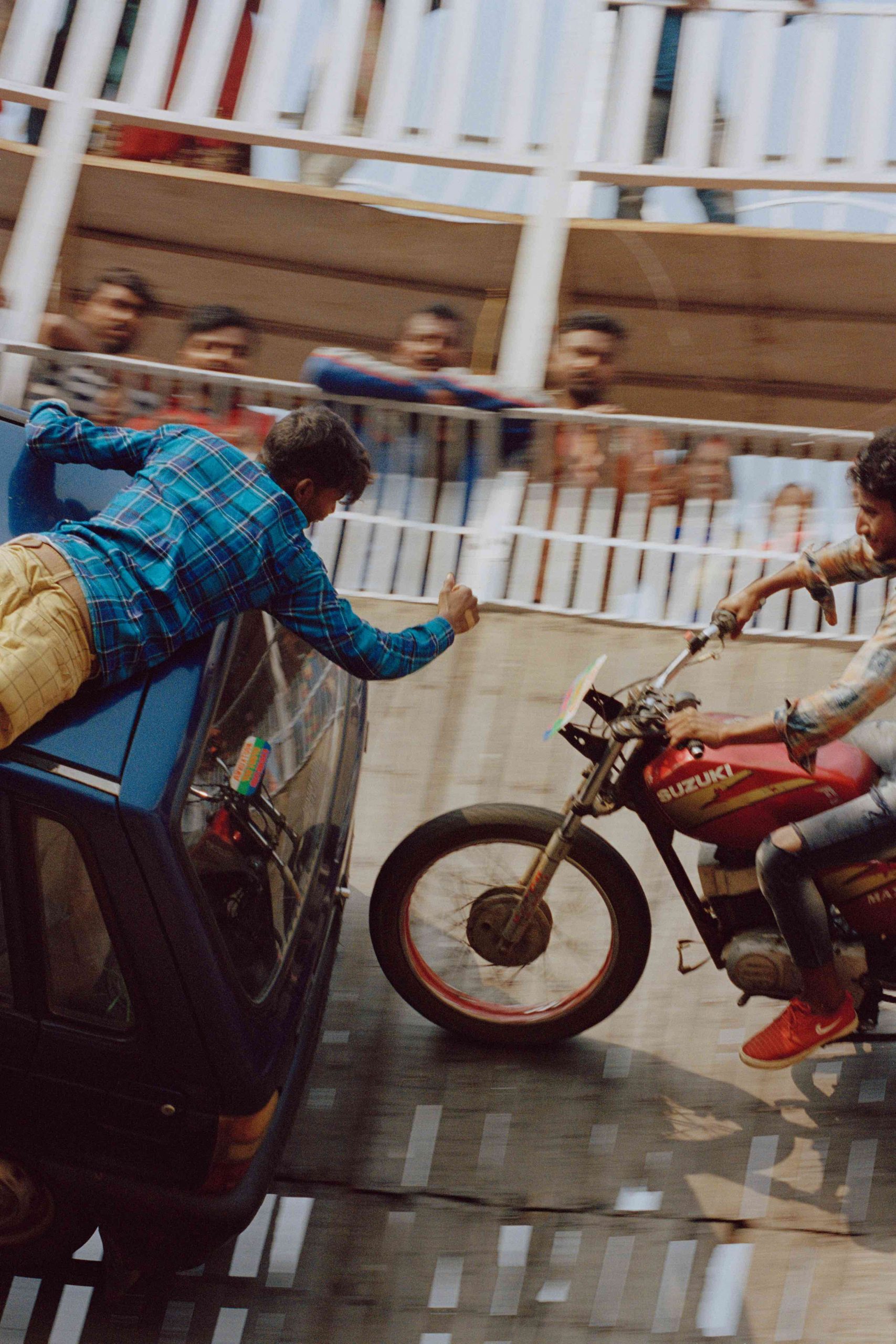 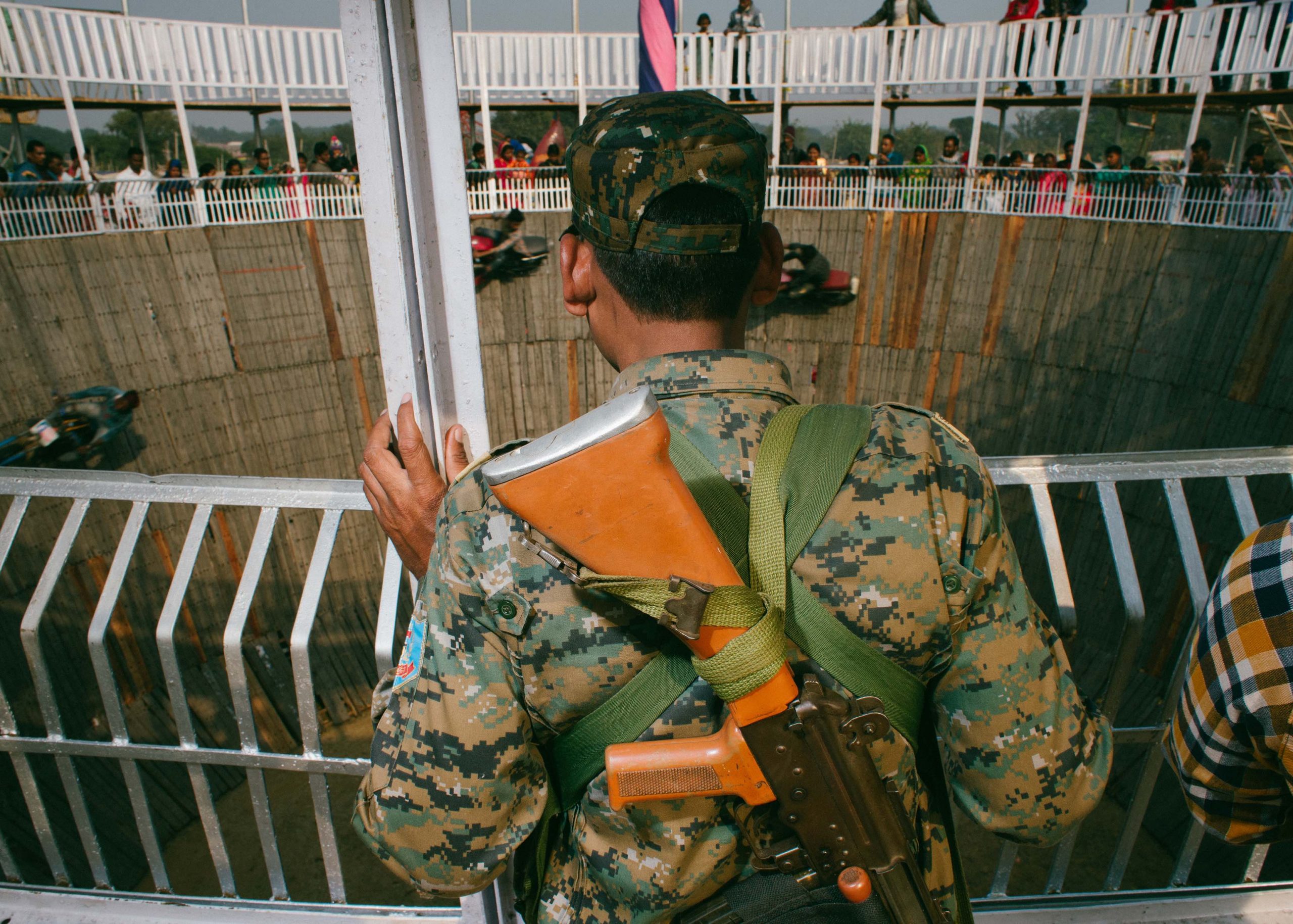 The Death Well performance itself happens three to four times a day. Morgan, along with a local fixer he was working with, would always leave before nightfall as the area was controlled by Marxist guerrillas.

Since his trip, India has been ravaged by Covid-19, meaning that the carnival’s future remains uncertain. Morgan remains in touch with the riders he met during that time, many of whom have since been forced to take up work in the mines. In response, he is donating a percentage of the profit from print sales to them directly.

This isn’t, however, the first hurdle they’ve faced. Given their success in maintaining a dying tradition, one suspects the daredevils of Dhanbad will find a way to continue defying gravity on two wheels. “The riders of the death well are the local celebrities,” Morgan says. “And they revel in that status.” 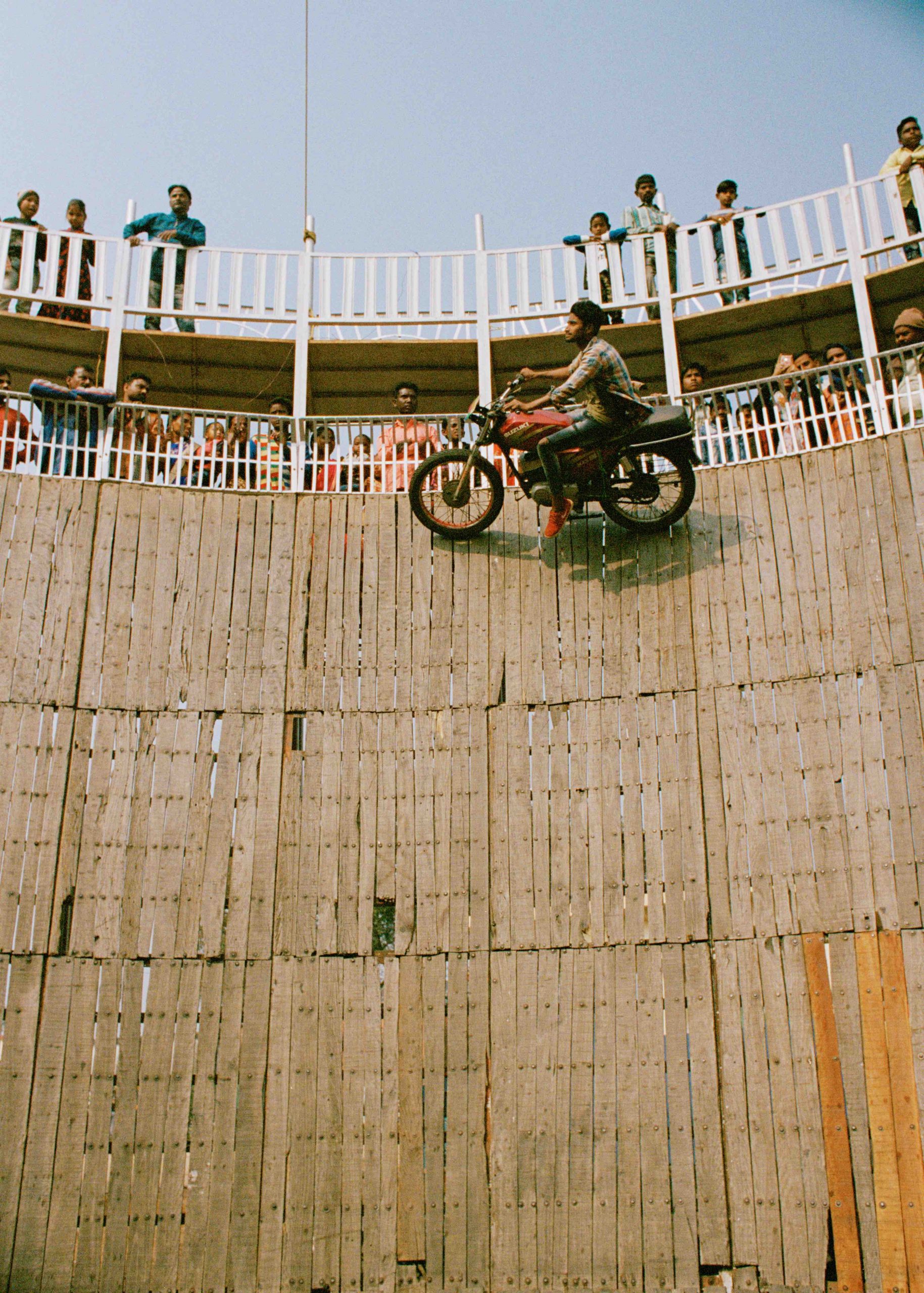 Purchase prints from the series and help support the riders on Tom D Morgan’s official website.

Linkedin
RELATED ARTICLES
OTHER ARTICLES
Welcome to the Death Well: a gravity-defying display of fearlessness that reimagines what’s possible on a two-wheeled machine.
Mike Smith’s intimate photos offer a detailed record of the inhabitants of Boston’s streets in his characteristic non-judgmental yet direct approach.
The New York MC reflects on his experience with Trumpian US immigration policy, and how it impacted his career.
Leading art critic Robert Storr reflects on the photographers – from Seydou Keïta, to Malick Sidibé, to Carrie Mae Weems – who helped to transform and redefine the medium.
The rapper talks injecting humour and fun into his sound and challenging drill stereotypes.
As the role of the nuclear family is increasingly called into question, people are finding new ways to exist outside heterosexist norms.