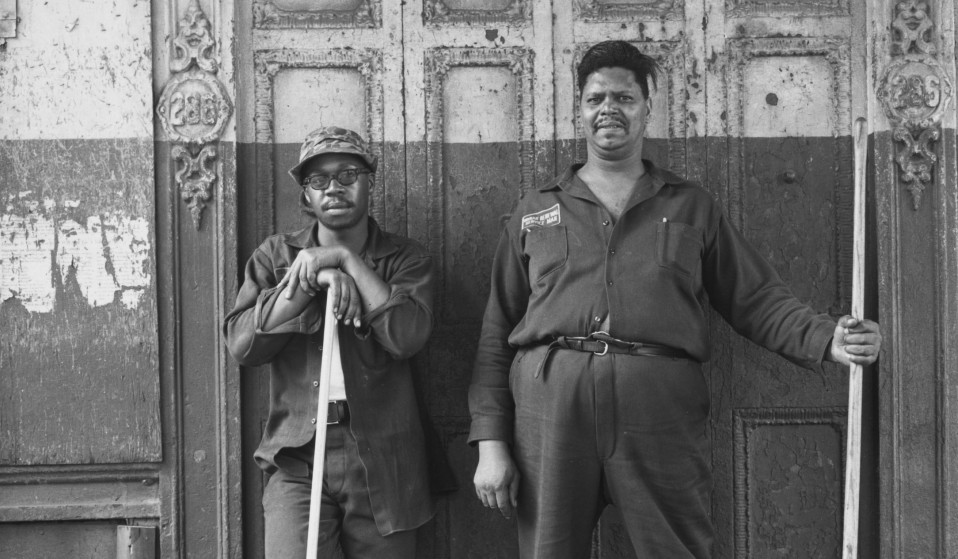 Five decades ago, the streets of Lower Manhattan were torn apart to make way for homes for higher-income communities. Danny Lyon – 25 years old at the time – shot the people and buildings who were left behind.

Five decades ago, the streets of Lower Manhattan were torn apart to make way for homes for higher-income communities. Danny Lyon – 25 years old at the time – shot the people and buildings who were left behind.

In 1966 at the age of 25, American photographer Danny Lyon returned to his native New York at the top of his game. Having completed his work on The Bikeriders and in the Civil Rights Movement as a member of the Student Nonviolent Coordinating Committee, settled into an apartment in Lower Manhattan just as the neighbourhood was undergoing radical change.

Under the auspices of David Rockefeller, the Downtown Manhattan Association had been formed as part of a new program of urban renewal. Industries were decamping from Manhattan in search of greener shores, leaving the city abandoned and in an abject state of decay. The financial district was heading to midtown where they could erect shiny new skyscrapers; the Washington Street Market closed after the fruit and vegetable suppliers set up shop in New Jersey. All that remained were 19-century residential and industrial buildings.

Governor Nelson Rockefeller, David’s brother, already had plans for the construction of the World Trade Center in the works, and together they focused on a new vision for downtown New York. A plan was enacted that would wholesale erase the buildings and streets of lower Manhattan and in its place, a new neighbourhood would be built, one designed to attract middle and higher income people in the name of “urban renewal.” 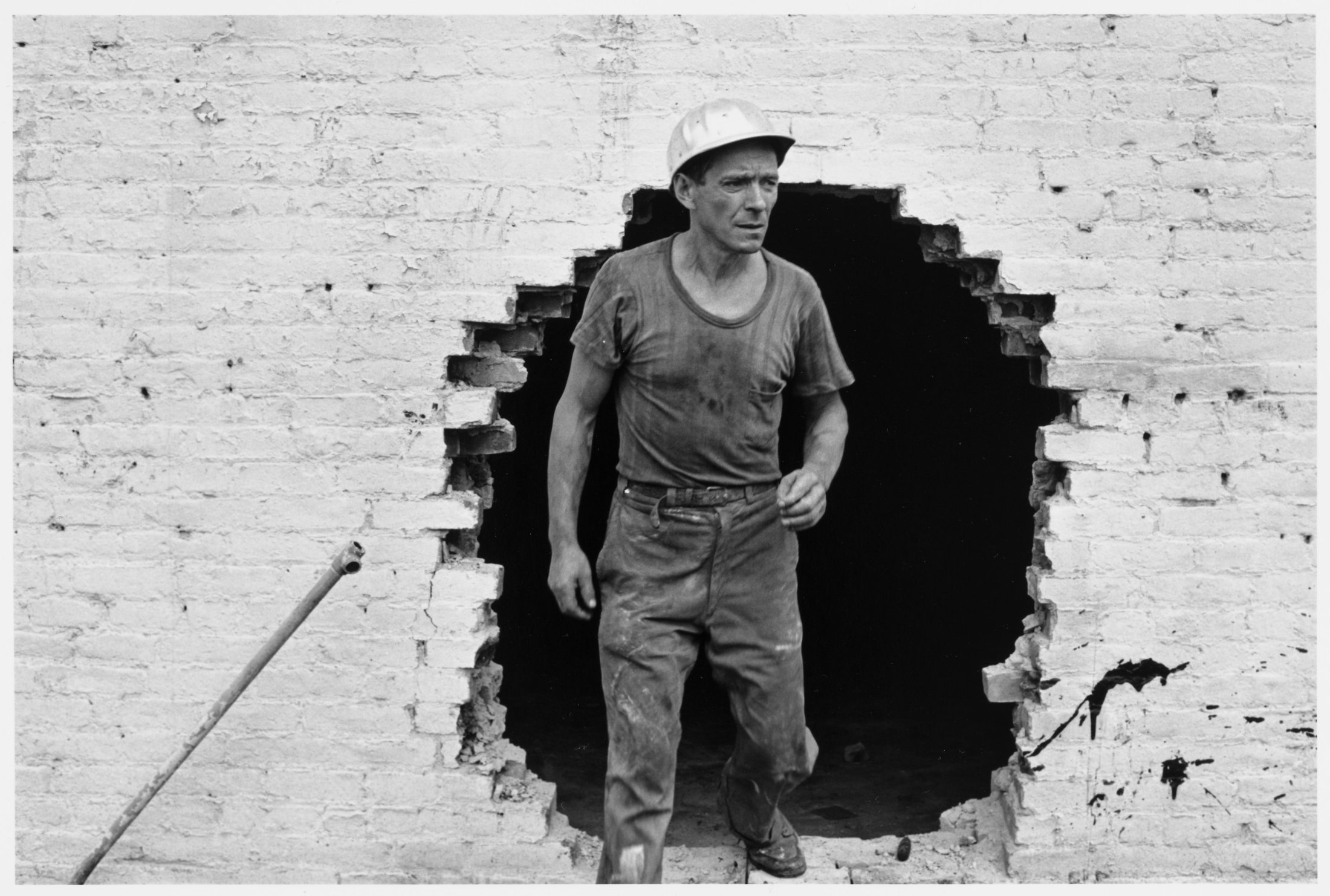 Realising the end of an era was close at hand, Lyon picked up his camera and got to work, creating a series of photographs that would become the seminal 1967 monograph, The Destruction of Lower Manhattan (republished in 2004 by powerHouse Books). A selection of 52 photographs from the series will be on view at the Cleveland Museum of Art from May 19 through October 7, 2018, in conjunction with FRONT, a regional contemporary triennial exhibition with the inaugural theme An American City: Eleven Cultural Exercises.

“This series was a real break for Lyon,” explains curator Barbara Tannenbaum. “His historical place had already been cemented as a figure of the New Journalism. He had been doing projects where he immersed himself, becoming very involved with his subjects and part of their culture in order to photograph them from the inside. He has the ability to engage people in a way that allows them to be themselves in front of the camera.” 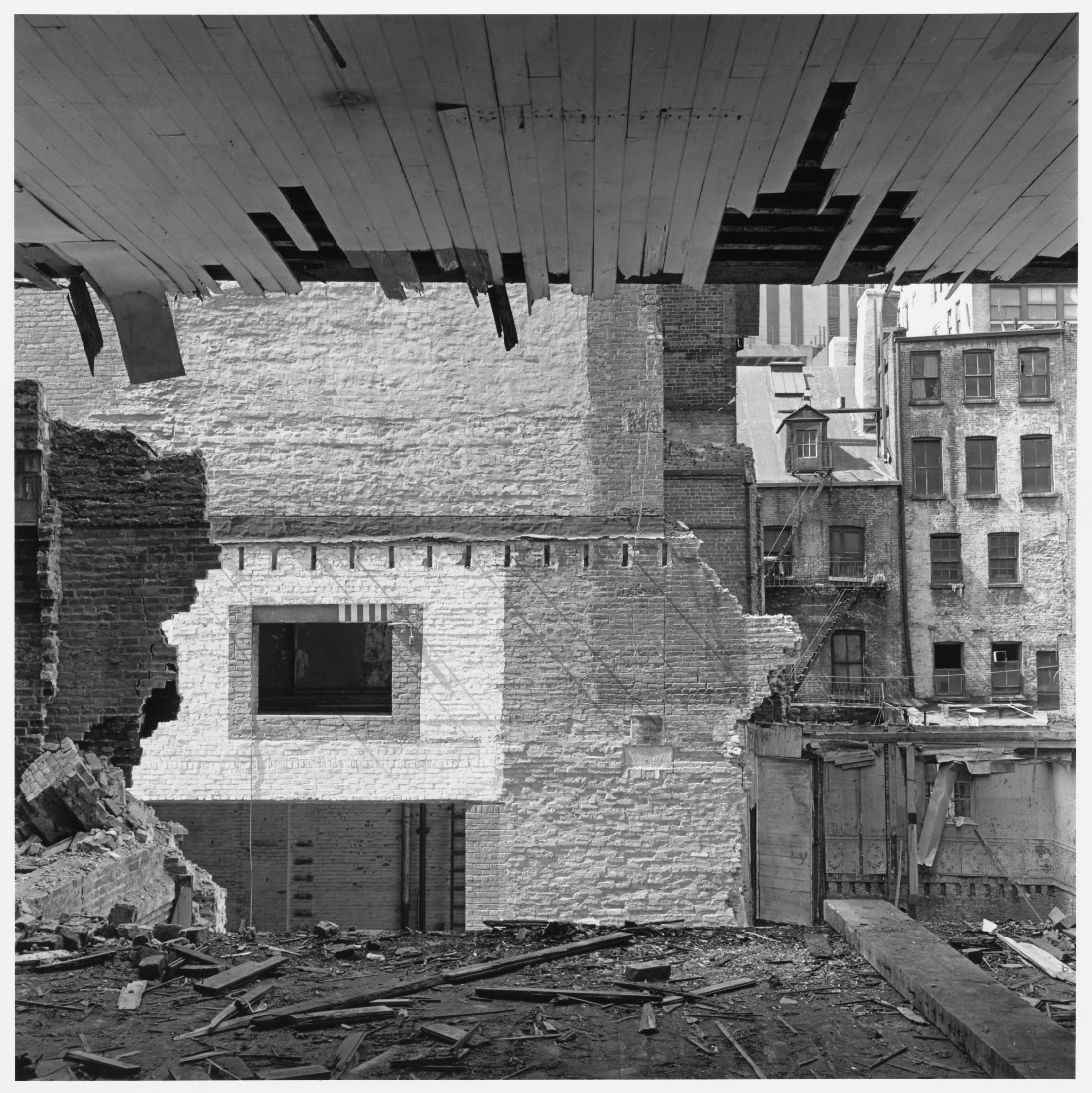 View through the rear wall, 89 Beekman Street, 1966–67. The Cleveland Museum of Art, Gift of George Stephanopoulos,

“This work is also a break in terms of technique. Many are done with 35mm camera but a number of the architectural photographs required use of a view camera, which he had never used before – so it was a learning experience. It is slow, carefully considered, calculated shot and it causes a different way of thinking. He has avoided all the clichés of architectural photography, and part of it may have been that he wasn’t trained in that so he was approaching it with a fresh eye.”

Unable to get access to the World Trade Center site, Lyon focused on documenting the buildings, demolition workers, and last remaining residents of predominantly commercial and industrial areas including the Washington Street Market, the tanneries, and electronics district. 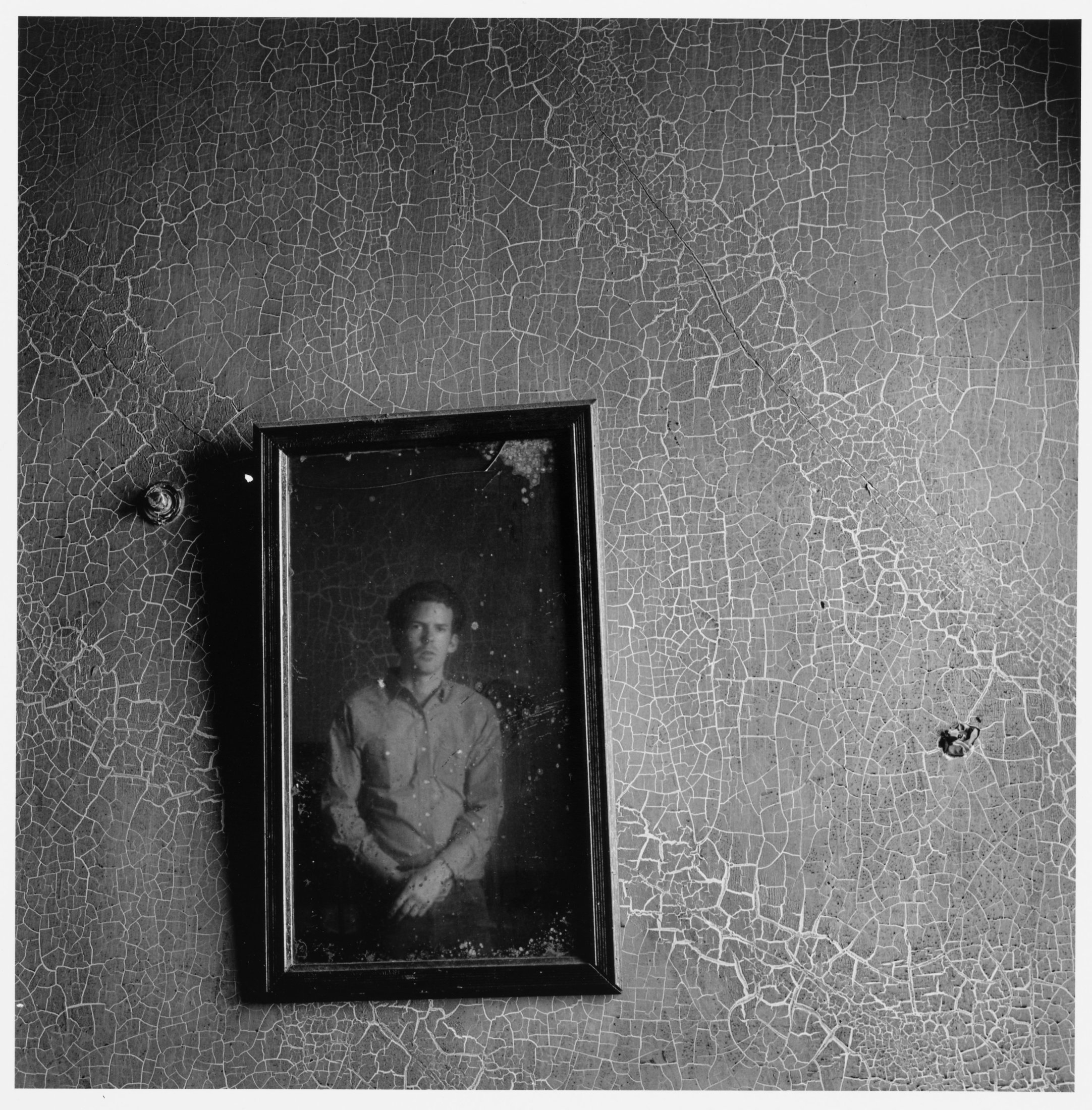 Portrait of a young man in an abandoned room, 1966–67. The Cleveland Museum of Art, Gift of George Stephanopoulos

“Historic preservation was not part of the vocabulary of the city officials dealing with urban renewal at this time,”  says Tannenbaum. “They didn’t really value the historic presence or intimate fabric of the neighbourhood and its small-scale streets. They felt that if they didn’t do something new, the population would not come to that area at all. The idea was wipe away the old, replace it with the new.”

Yet progress is not always benevolent or beneficial; for every gain, there is an equal and opposite loss – a sensibility Lyon knew, as underscored by his eerily prescient title. The photographs are a eulogy of sorts, a tribute to a city built by hand that no longer exists. 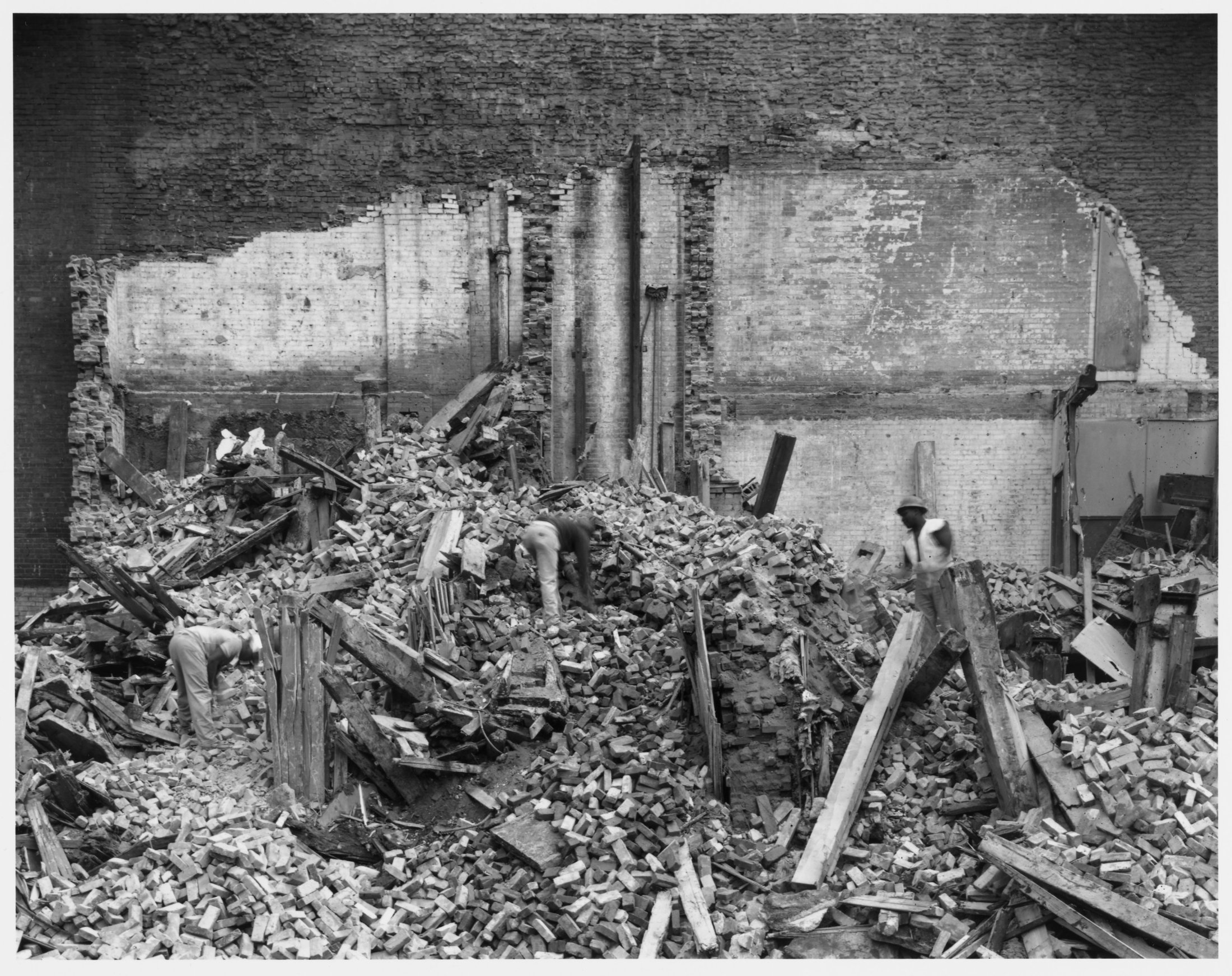 Brick crew on the west side. Bricks are salvaged and sold as antique brick for use in new homes, 1966–67. Danny Lyon. The Cleveland Museum of Art, Gift of George Stephanopoulos

“Lyon shows us the neighbourhood, warts and all. There’s a poignancy to that that helps to create a sense of intimacy. The sheer beauty of the photographs and the stately elegance to the composition slows you down and gets you to look and gets you involved in them,” Tannenbaum notes.

“The city that is no longer there is being preserved through these photographs. They tell you that this is something that was important, valued, and loved – even with the peeling paint and rusting cast iron façade. It is a story where you not only have a hero but you know that you have a tragic ending and it makes you value it all the more.” 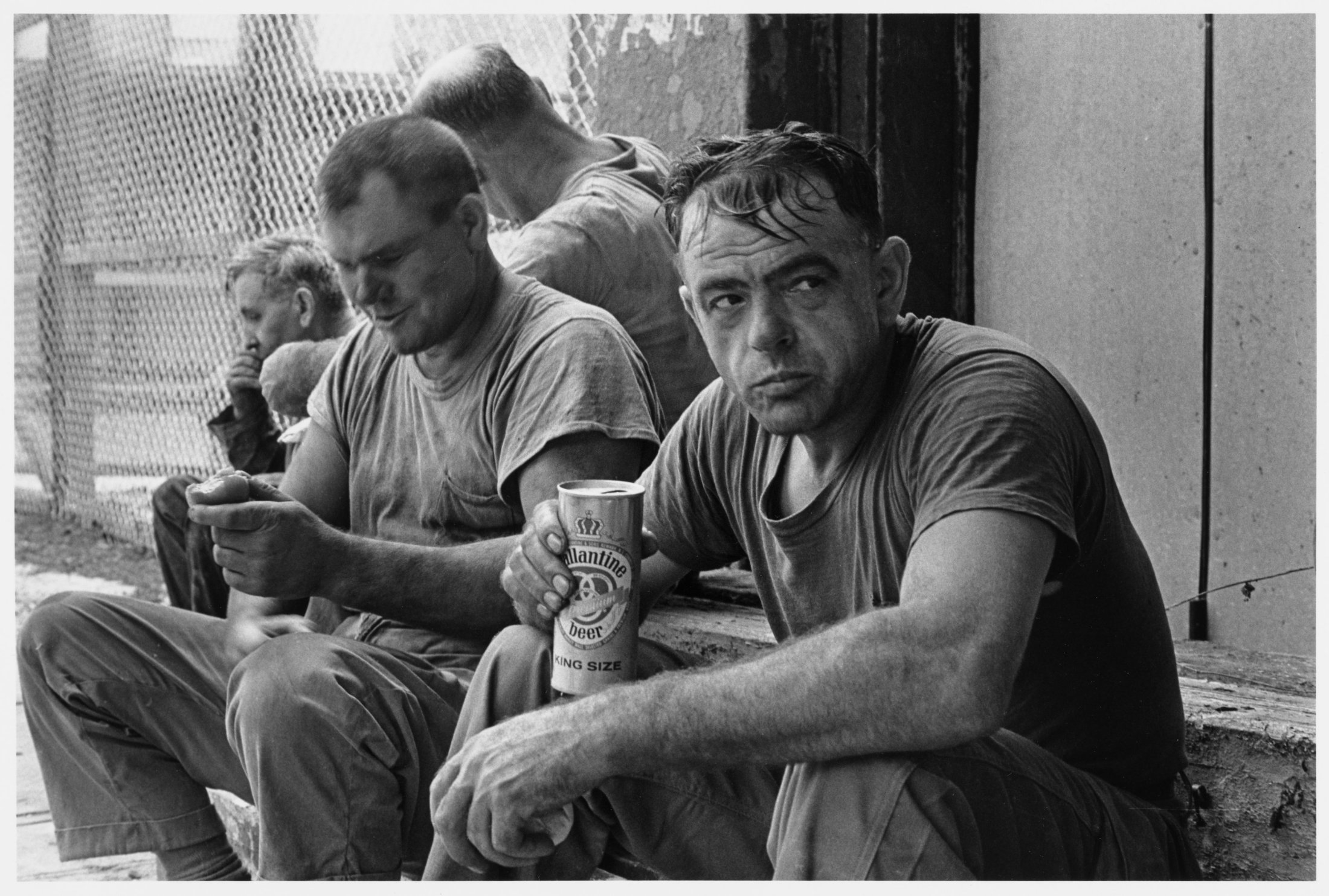 Housewreckers at lunch on the west side, 1966–67. Danny Lyon. The Cleveland Museum of Art, Gift of George Stephanopoulos 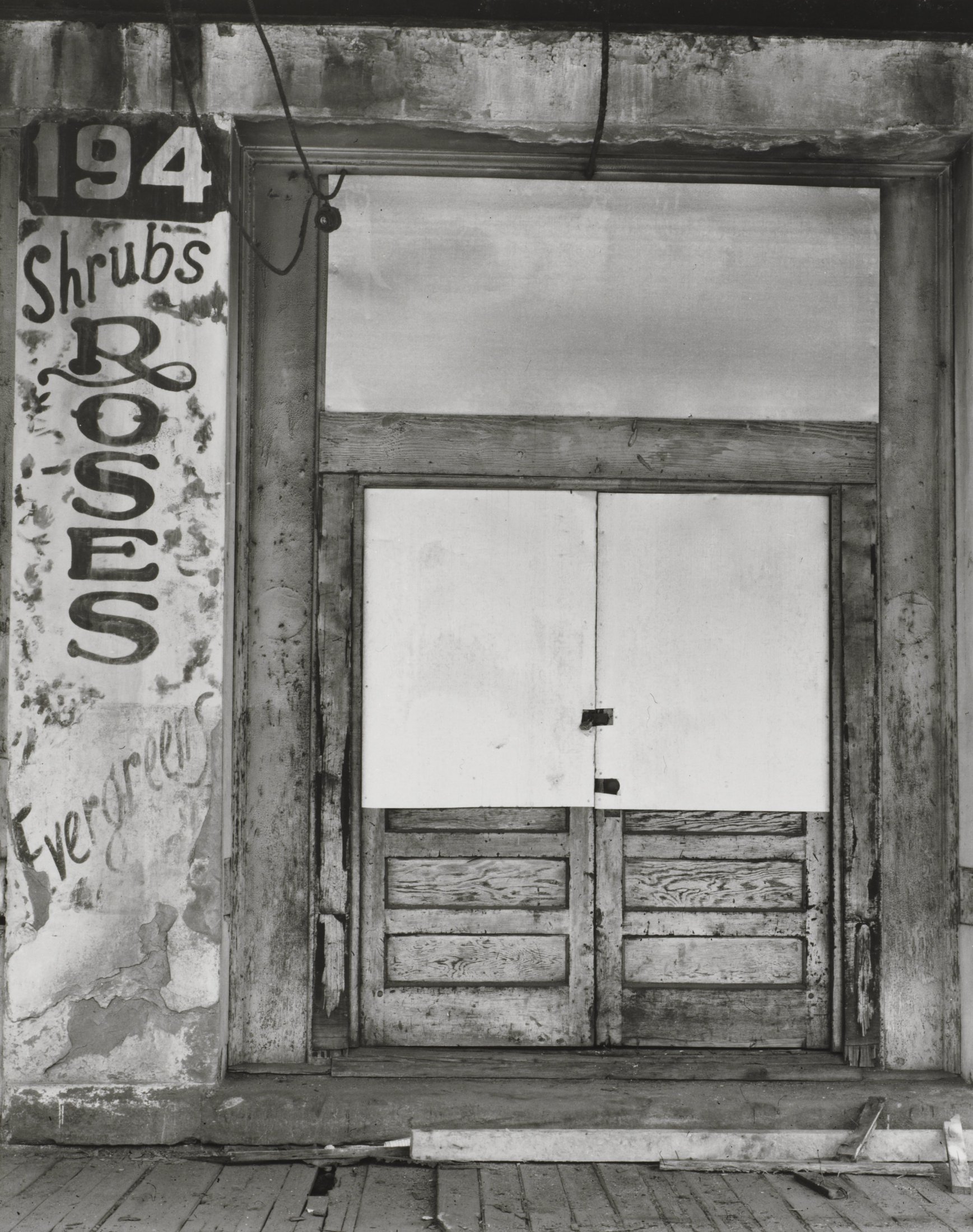 A Reade Street entrance to 187 West Street, 1966–67. The Cleveland Museum of Art, Gift of George Stephanopoulos 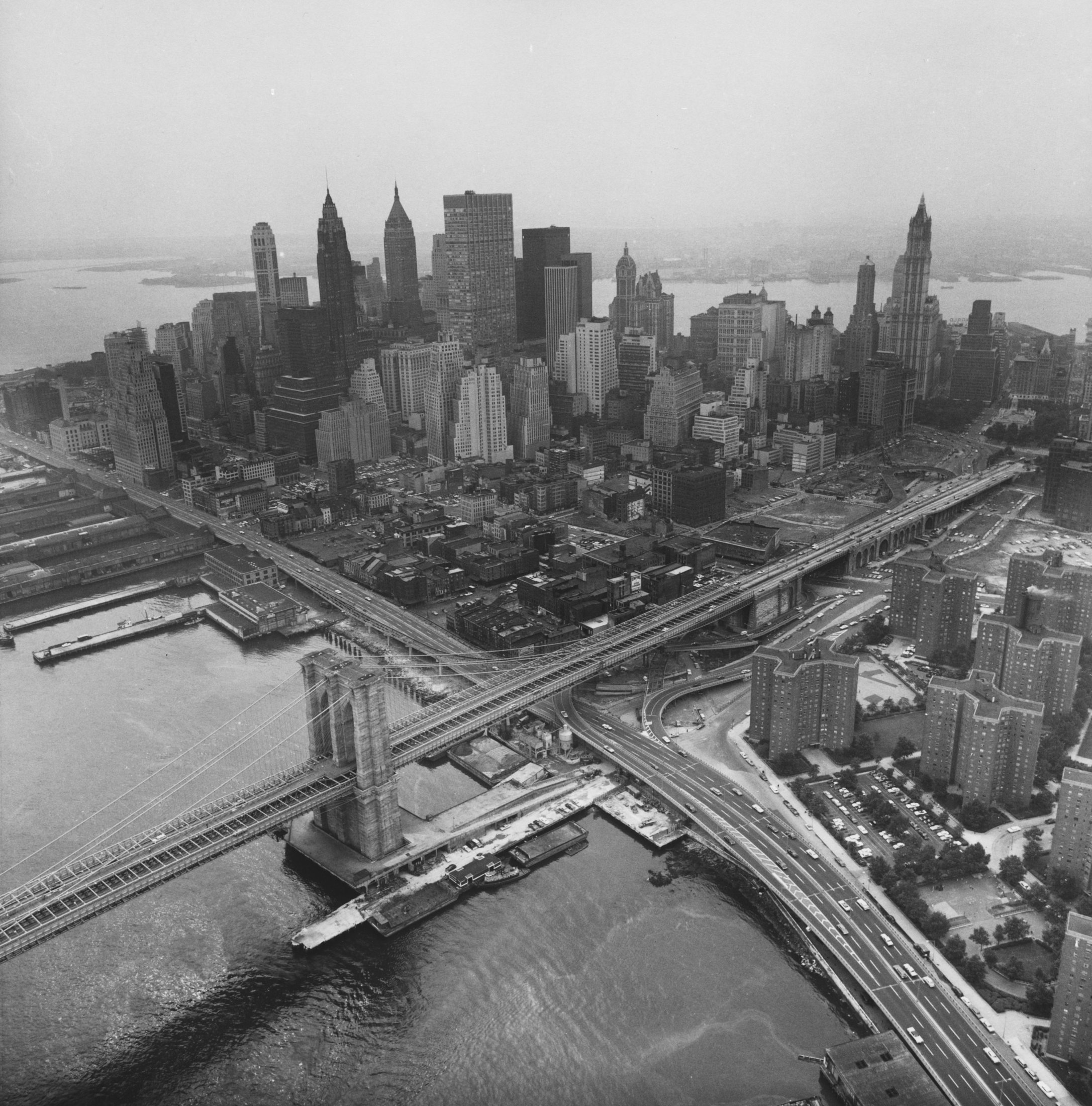 Aerial view of Manhattan, 1966–67. The Cleveland Museum of Art, Gift of George Stephanopoulos 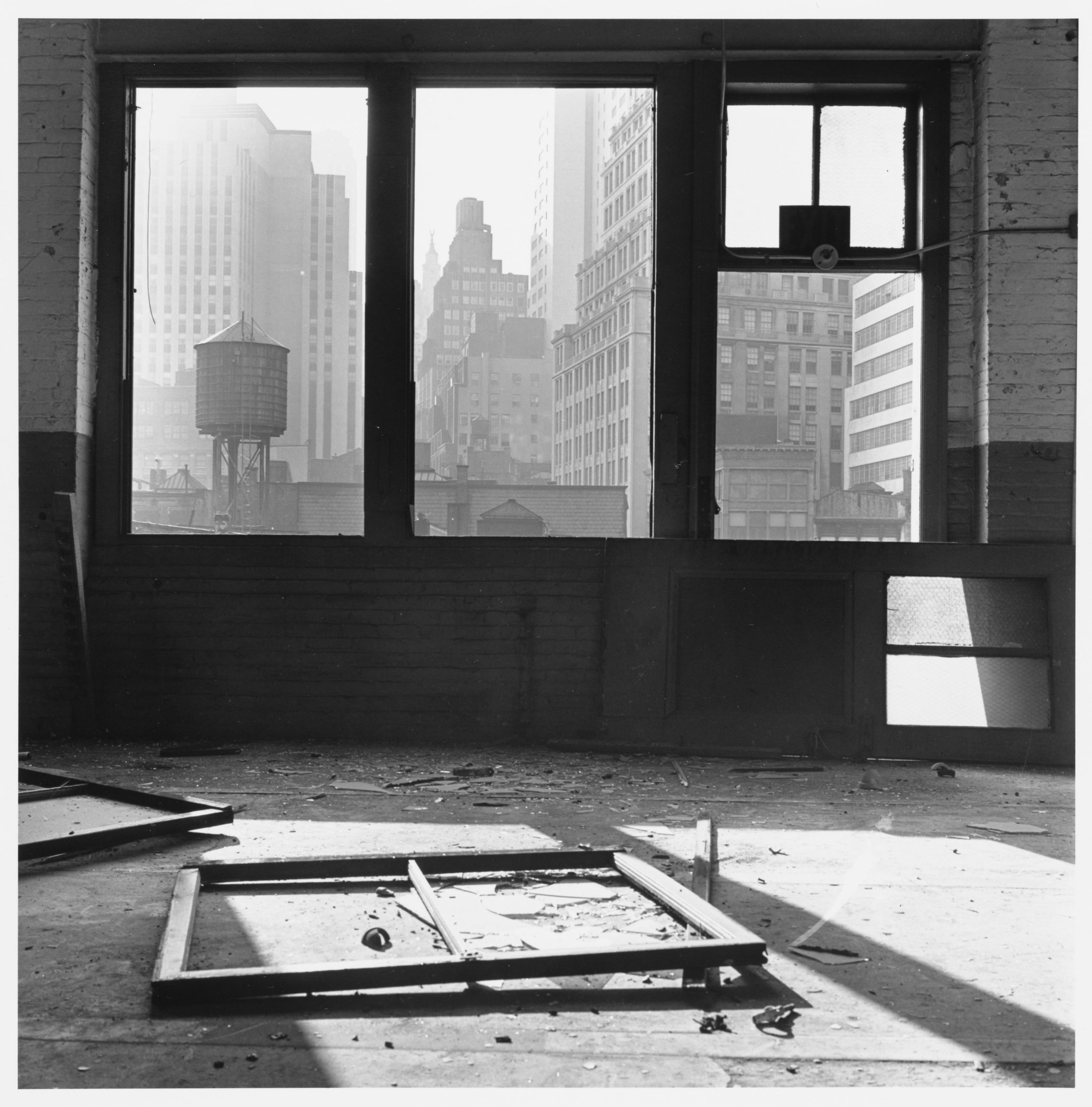 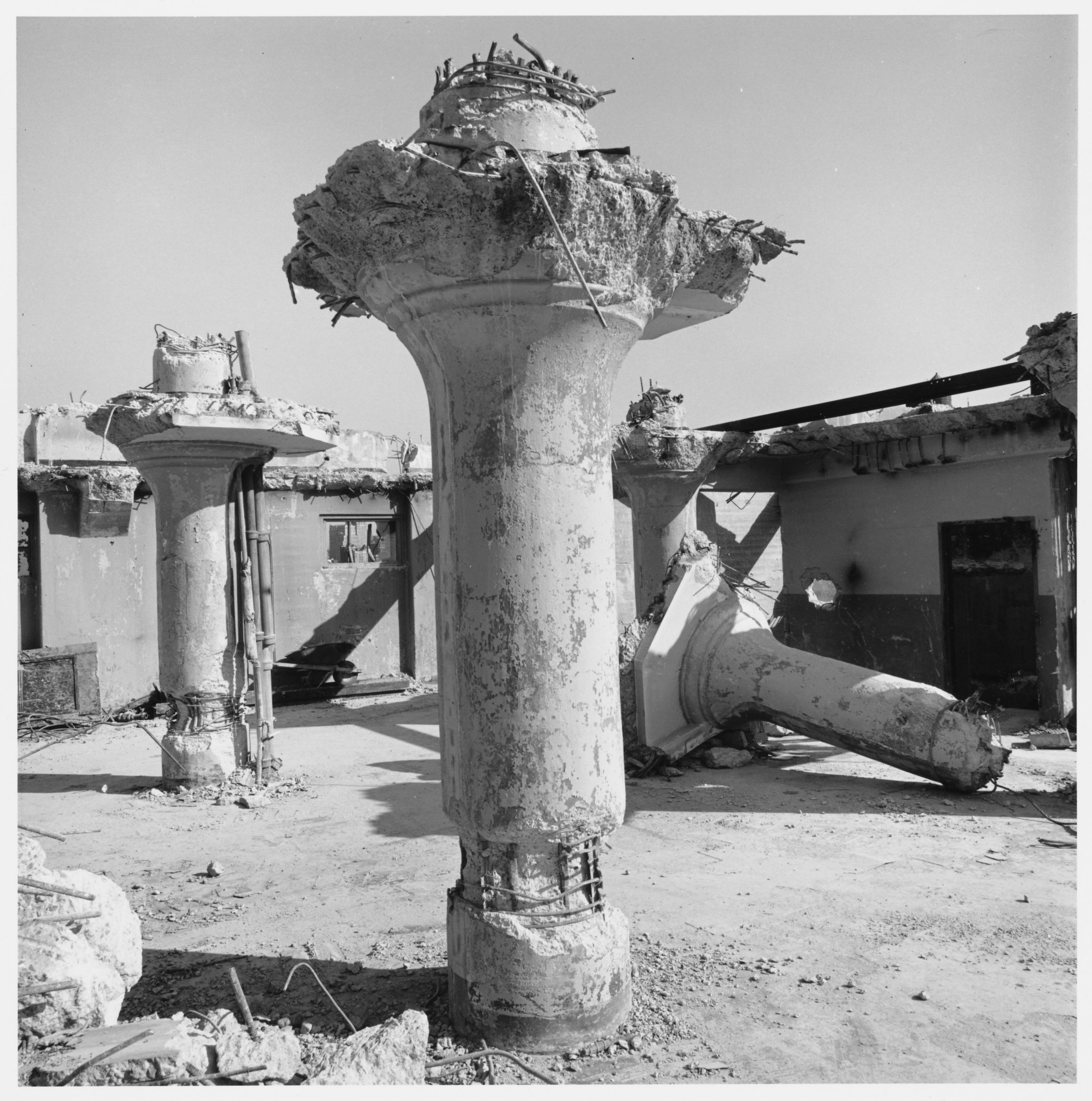 The ruins of 100 Gold Street, 1966–67. Danny Lyon. The Cleveland Museum of Art, Gift of George Stephanopoulos 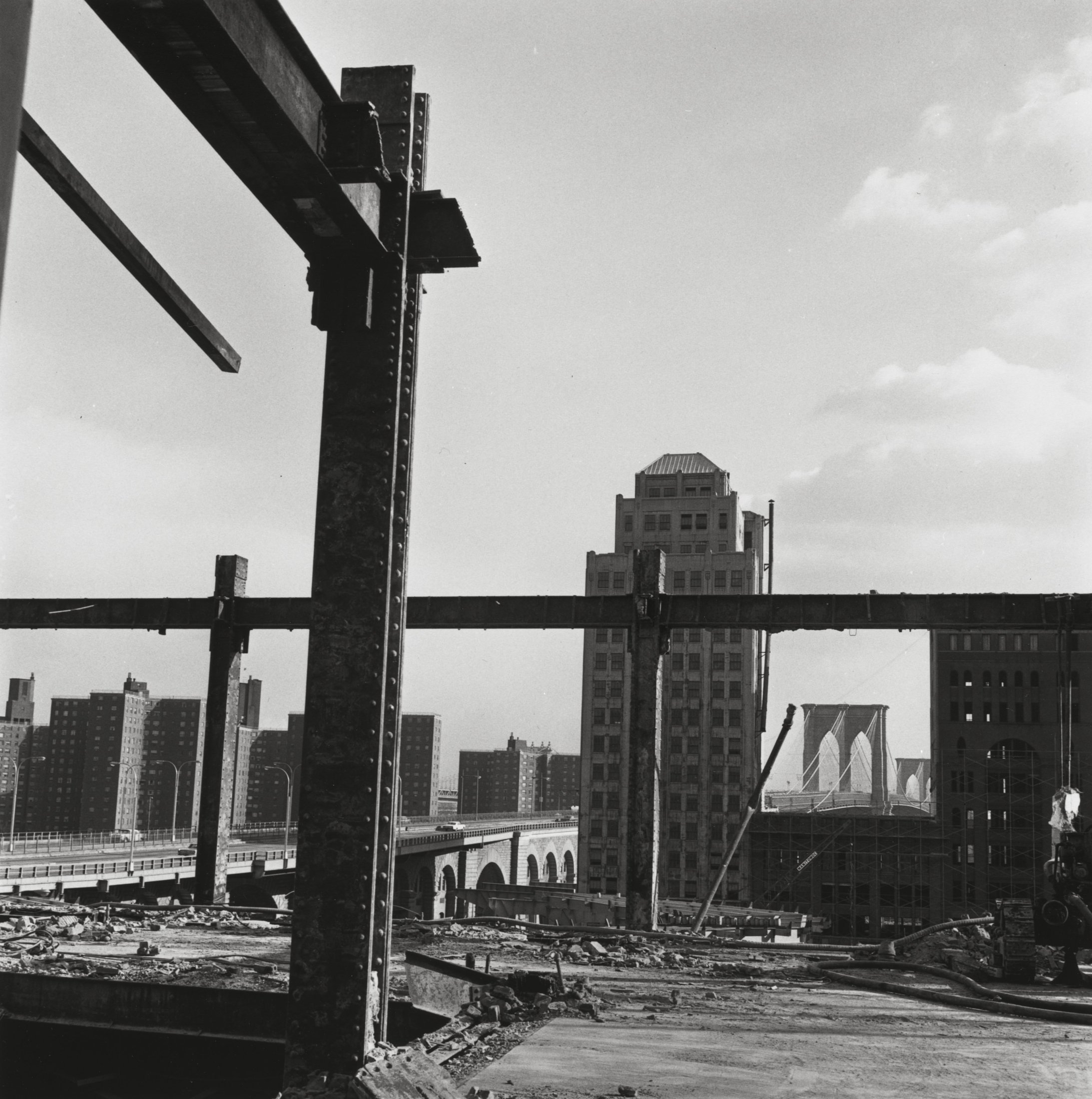 100 Gold Street seen from the remains of the Tribune Building, 1966–67. The Cleveland Museum of Art, Gift of George Stephanopoulos 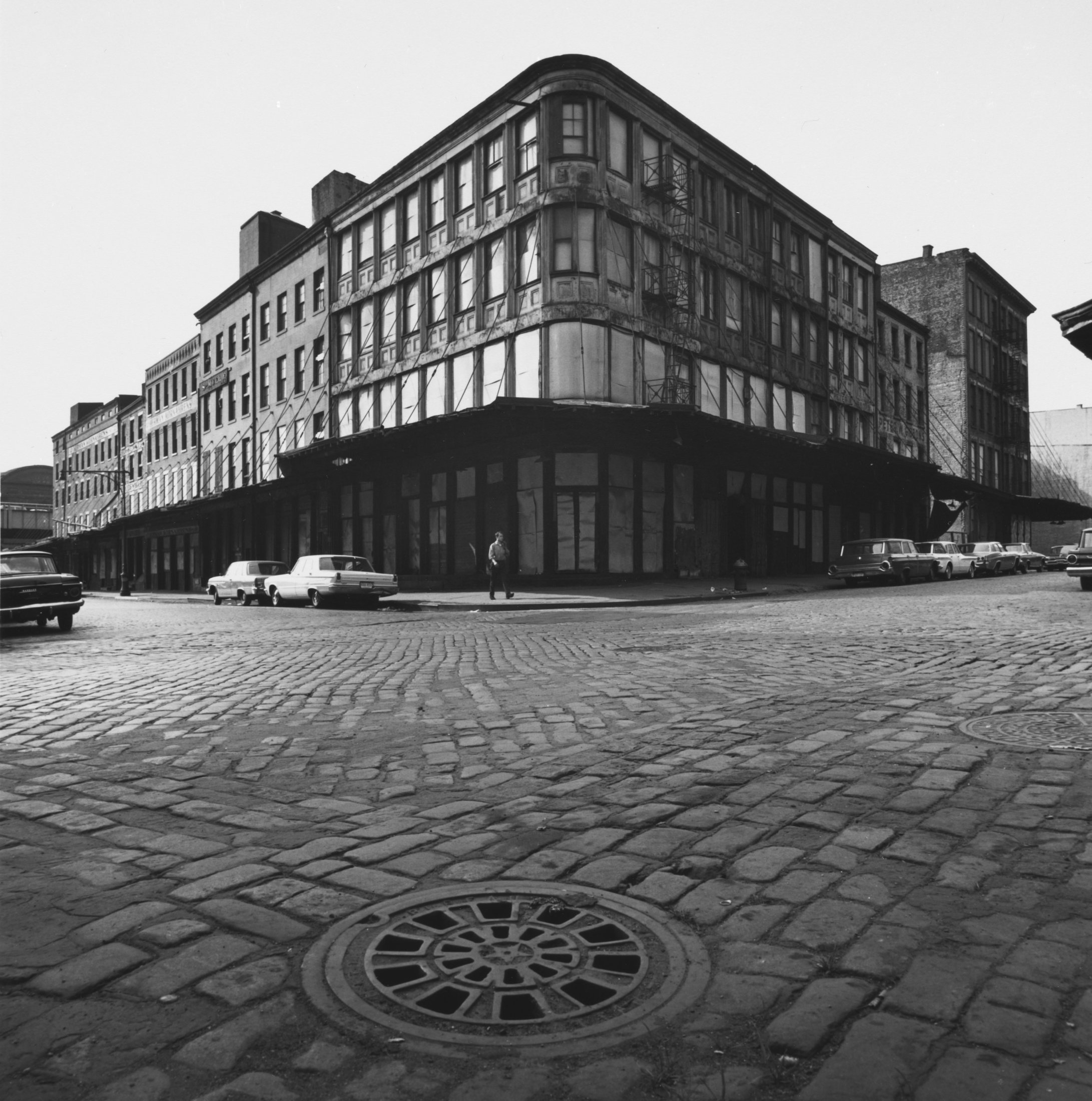 258 Washington Street at the northwest corner of Murray Street, 1966–67. The Cleveland Museum of Art, Gift of George Stephanopoulos

The Destruction of Lower Manhattan is available on powerHouse Books.

Linkedin
RELATED ARTICLES
OTHER ARTICLES
Members of the collective share some of their reasons to run as part of #UnitedBySummits, a campaign that looks to uncover transformative power of the outdoors.
In the latest OFFF Dispatch, the enigmatic designer dives into his process, connecting the dots between his unique and varied creative output.
From the Yakuza to a biker gang, Bruce Gilden recounts capturing Tokyo and Osaka in the ‘90s.
The government’s failure to take long Covid seriously has led to the formation of a group campaigning for the thousands of forgotten victims of the illness.
After news broke last week around an expected reversal of the 1973 landmark law that made abortion legal in the US, protestors gathered in the UK in support of American women.
Following the release of his latest album God Don’t Make Mistakes, the rapper talks horror villains, police brutality and being unafraid to show his vulnerable side.