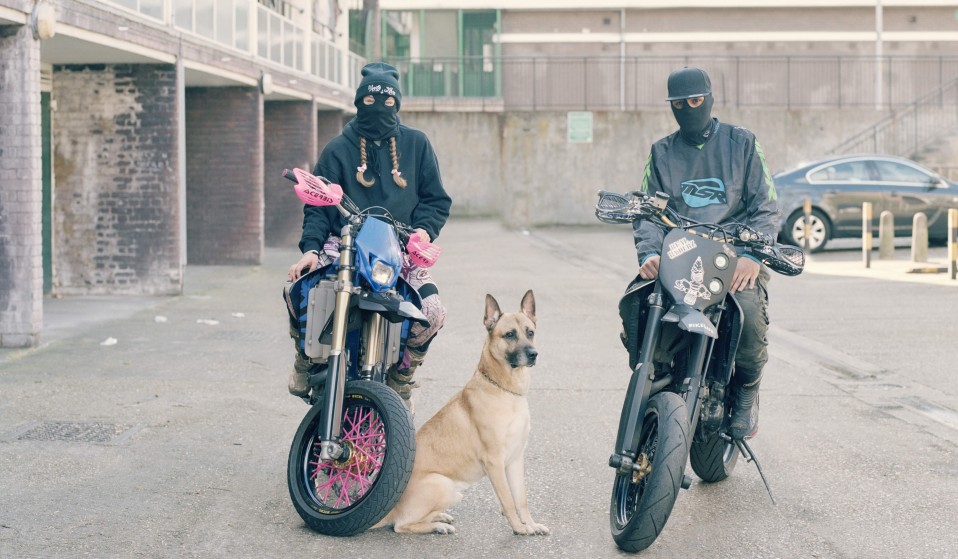 Spencer Murphy has always been drawn to outsiders, so when he stumbled on a video about the Bikelife scene back in 2013, he was instantly drawn to their world.

With the scene spreading internationally, “Riders” find a sense of unbridled freedom in riding dirt bikes and performing dangerous tricks as they speed through urban spaces. The city becomes their playground; from large stretches of tarmac on industrial estates away from prying eyes, to the traffic-filled streets of big and small cities alike.

The scene, which divides itself in groups (not gangs), gained traction as riders begun to upload videos of their stunts to Instagram, quickly gathering masses of followers, featuring in music videos and becoming urban legends in playgrounds and on the street.

But the bike life is not just about happiness and sovereignty. As well as dealing with the very real danger that comes with each trick, riders are often seen as threatening troublemakers, and are treated as such by the police. This translates into a need for anonymity, facilitating the creation of a tightly knit community that looks out for itself.

All that taken into consideration, it should come as little surprise that when Murphy started to explore the scene as a complete outsider he found a fair few dead-ends. But that didn’t deter him, and after meeting a British rider called Izzy the doors were opened into a community where the pursuit of liberty rules supreme.

You mention you feel a certain sense of kinship to the bikers, as an outsider yourself… Did your perceptions of your subjects change while shooting?
I don’t see myself as judgmental – I try to go into every situation with an open mind and look for the human element and I try and be sympathetic to my subject. But I suppose I wanted to know why they were being portrayed as criminals on bikes and if there was any validity to it.

What did change, I think, was my comfort level with the bikers. I remember that first time driving up the strip to meet them, bikes screaming past on one wheel and a group of about 50 young men congregated on bikes, mostly in masks. I can’t lie: there was a healthy amount of fear there, but every time I felt like that, someone would come over and engage with me, and I soon realised that, for the most part, they are very sweet guys and girls who are just misunderstood and misrepresented.

From what I can tell it’s as healthy an outlet as skateboarding or parkour, just more dangerous and anti-social because of the fact they don’t have a place to go, and because of the noise and their scary appearance. Many would tell me it was Bikelife that kept them off the streets and out of criminal gangs.

Did you find there was a common thread between all the riders and why they were drawn to Bikelife?
I’m not really sure – I’d say a lot of them are working class kids from local estates and that the scene gained in notoriety through Instagram. All of a sudden there were guys with 50k + followers on Instagram and appearing in hip hop videos. So they became idolised by the younger kids.

What was really interesting to me was the passage they took. On any Sunday you’d have lots of 8-16 year olds there on their push bikes, spectating and emulating their idols by practising complex wheelies, then you’d have those that were old enough to put an L plate on a scooter and were often just as talented as the men on dirt bikes, quads and superbikes. So there was this kind of rite-of-passage thing going on, but there was very little snobbery – everyone seemed very caring and concerned for one another, there was a real sense of community at the heart that echoed my experience of skateboarding in my teens and twenties.

What stands out from your time working on this? Which experiences will stick with you?
I don’t really want to talk about the negative things, but when I think about particular moments in my small snippet of a year in the community, the thing that comes to mind above all else is Carlton’s death. I’d spent a sunny weekend down at a strip in Croydon, one that I really wanted to capture but which was hit and miss; often I’d arrive to find that no one was there, or that the police had shut it down.

That day it was quiet and the light wasn’t quite right, so I went around the corner for a coffee. Ten minutes later we saw a helicopter in the sky and, thinking that the police were out, we decided to go and see what was happening. I arrived back to the strip to see the ambulance men trying to resuscitate someone on the very spot I was taking photos ten minutes previously.

Two bikes had had a head-on collision, Carlton sadly died.

It took me a long time to resolve that in my head and that was nearly the end of the project for me. I didn’t know Carlton but it somehow really hit me.

I saw the outpouring of the community and how much love they showed him, they seemed to come to terms with it because he died doing what he loved, and I realised that they all knew the risks they took. It made me really sad, and on a selfish note, I feared for my own safety by putting myself into those situations, whereas I hadn’t given it much thought before.

I didn’t know if I wanted to contribute to something that someone could die in the pursuit of, but then I didn’t want Carlton or anyone else that had lost their life not to be celebrated. So that’s really how I made my peace with it. Carlton’s death was a tragic loss, I didn’t know him but I felt the love that every biker out there showed him and I wanted to try and share that.

His death brought about change and riders talked about safer ways to avoid this happening again afterwards. I hope that discussion continues.

How do the riders interact with local communities?
The riders are generally very conscientious. Although most will be locals, they don’t just ride anywhere. They try and find a spot that can remain secret from the police and not draw unwanted attention from the public. So a lot will travel in vans to a spot.

Strips will be hidden in mazes of industrial estates or on a disused airstrip or private road somewhere. Beyond that they look for a smooth straight bit of road with escape routes both ends, in case the police do give chase.

There is a big scene of riding through traffic as well though and this is seen by many as what they practice for on the strip – being able to swerve through traffic with one wheel raised at 12 o’clock and having the skill to read the contours of the road and predict the other road users are all part of the thrill. That definitely goes on and those are often the videos that get the most hits on social media. 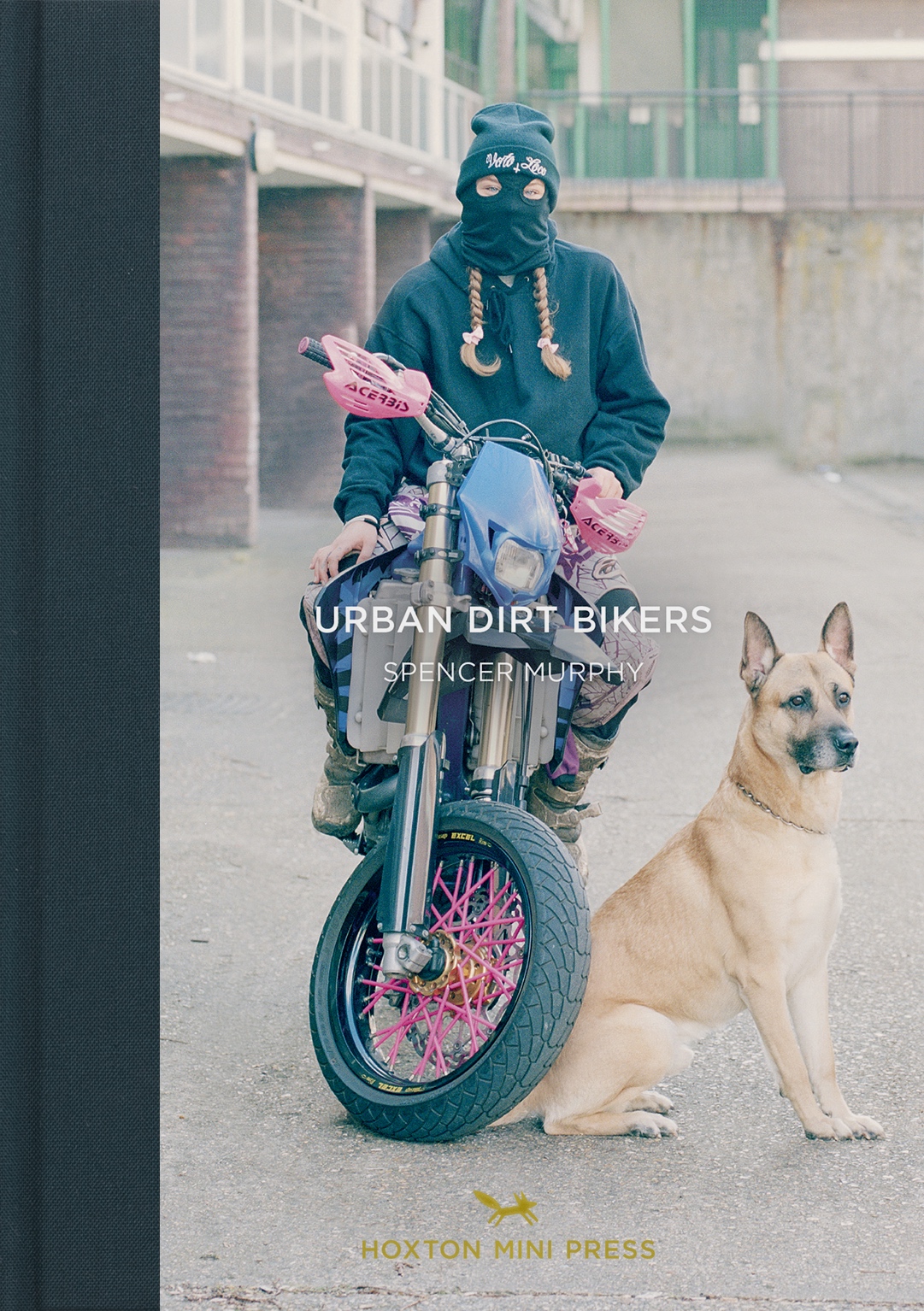 Linkedin
RELATED ARTICLES
OTHER ARTICLES
Following the release of his latest album God Don’t Make Mistakes, the rapper talks horror villains, police brutality and being unafraid to show his vulnerable side.
Shifting the focus from the cost of living crisis to tackling obesity while many starve or freeze is farcical and pointless, writes Fatzine founder Gina Tonic.
The revered showbiz chronicler recalls his journalistic beginnings, documenting subcultural scraps in the ’80s.
Members of the collective share some of their reasons to run as part of #UnitedBySummits, a campaign that looks to uncover transformative power of the outdoors.
While protests over abortion rights rage in the US, access to abortion services is still almost nonexistent in parts of the UK.
Following the success of her debut novel, the Tottenham native is restating her commitment to the place that made her.