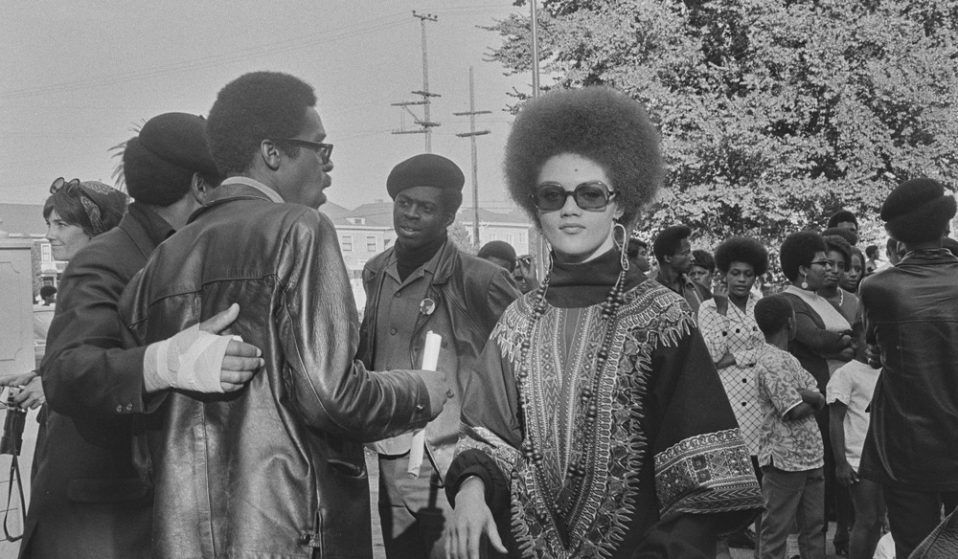 Photographers Pirkle Jones and Ruth-Marion Baruch aimed to debunk the myths surrounding the party, revealing what wasn’t shown in the media.

Photographers Pirkle Jones and Ruth-Marion Baruch aimed to debunk the myths surrounding the party, revealing what wasn’t shown in the media.

In 1968, the Black Panther Party (BPP) stood 2,000 strong; armed not just with firearms, but a knowledge of the Constitution, state, and local laws. Initially organised to fight police brutality, the group quickly organised to institute community social programs. Leadership understood the power of the press and began working with writers, artists, and photographers to get the word out.

That year, Kathleen Cleaver met husband and wife photographers Pirkle Jones (1914-2009) and Ruth-Marion Baruch (1922-1997), and gave them unprecedented access to the inner circle of the BPP.  Of the work they made, Baruch said: “We can only tell you: This is what we saw. This is what we felt. These are the people.”

The photographs – first printed in The Black Panther weekly newspaper – were immediately well-received, and an exhibition of the work, Black Panthers: A Photo Essay, opened at San Francisco’s de Young Museum shortly after. More than 100,000 people attended the show, despite City Hall’s best efforts to pressure the photographers to delay or cancel it.

This historic body of work is the inspiration for Vanguard Revisited: Poetic Politics & Black Futures, an exhibition that places Jones and Barruch’s archival photographs in dialogue with the work of four contemporary black artists and collectives: Kija Lucas, Tosha Stimage, Chris Martin, and 5/5 Collective. The exhibition is the culminating project for the students of the Collaborative Practices Course, which was taught by Jeff Gunderson, Librarian and Archivist at San Francisco Art Institute (SFAI) during autumn 2018. 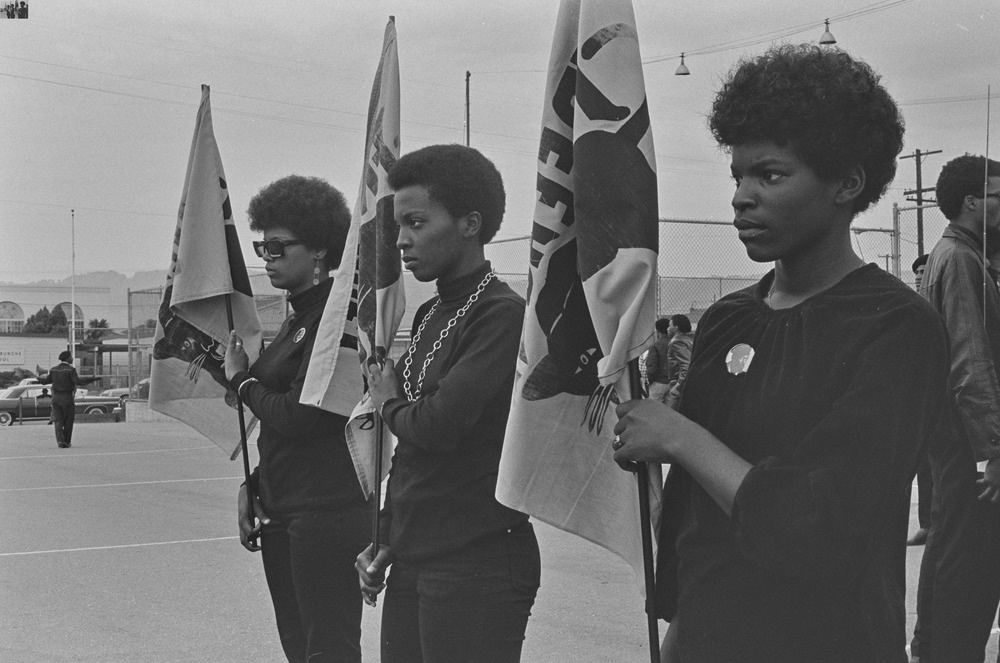 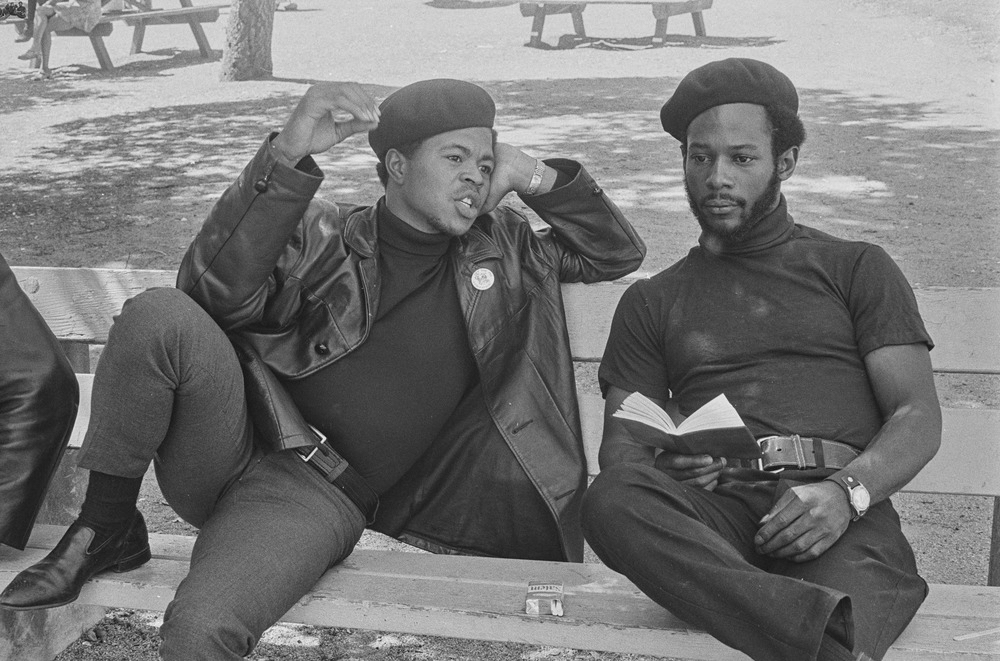 Gunderson met Jones when he began working at SFAI’s Anne Bremer Memorial Library. Over the years, they spoke frequently about photography and politics, as well as his time as a student at SFAI on the G.I. Bill, studying photography under Ansel Adams in 1946, where he first met Baruch.

“Ruth-Marion received the very first MA in photography in the US in 1946 from Ohio University, doing her thesis on Edward Weston,” Gunderson remembers. “Afterwards she enrolled at SFAI, where she met the luminaries on the faculty: Adams, Weston, and Dorothea Lange, as well as Minor White, Lisette Model, and Imogen Cunningham.”

“Both Pirkle and Ruth-Marion had become radicalised in the late 1950s and into the 1960s, being anti-war, pro-civil rights and members of the Peace and Freedom Party. Ruth-Marion approached Kathleen Cleaver about photographing, explaining how she wanted to debunk the demonisation of the Panthers and to show the side of the Panthers not being shown in the media.”

After receiving an invitation to photograph a Free Huey Rally in Oakland’s De Fremery Park, Jones and Baruch were introduced to Kathleen’s husband, Eldridge Cleaver. 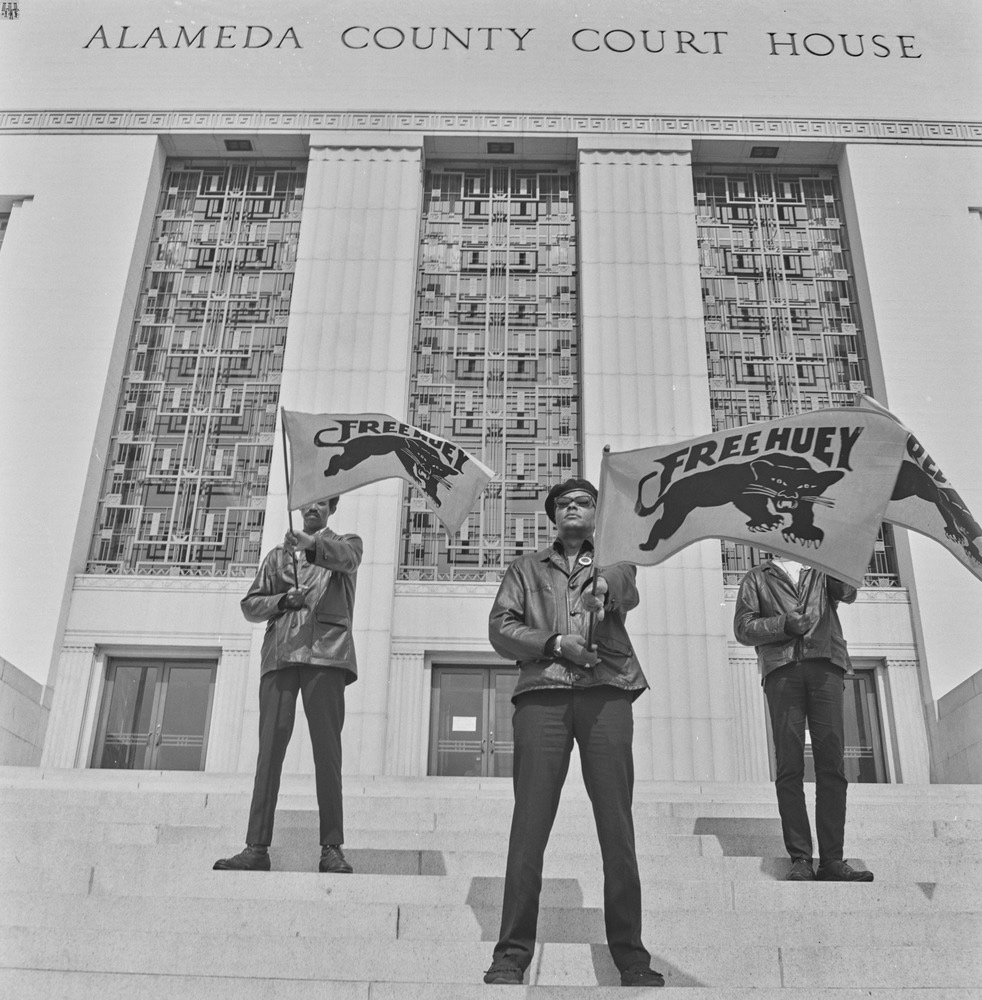 “Pirkle and Ruth-Marion were eager to have their photos shown in The Black Panther newspaper. The Panthers had a great grasp on communication: whether it be in their rhetoric, artwork, their confident style, and most of all their message, which resonated with a wide group of radicals, not just left-leaning African-Americans.”

“When they showed their first images to the Cleavers, the couple responded enthusiastically. Eldridge asked, ‘Why do your photographs have a feeling that none of the work I’ve seen of us by other photographers has?’”

Jones and Baruch stood in solidarity with the BPP, openly using photography to support and amplify the message. “They would never have considered themselves photojournalists – not even documentary photographers. Their photographs took a stance,” Gunderson says.

“Even though they worked together and their intentions were ‘to tell it like it is,’ in the parlance of the times, they photographed individually and then edited the set of photos into a joint essay. As one of the Panther founders Elbert ‘Bigman’ Howard would later say, Pirkle and Ruth-Marion, ‘had a great eye for humanity; nobody was posing; we were all part of somebody’s family.” 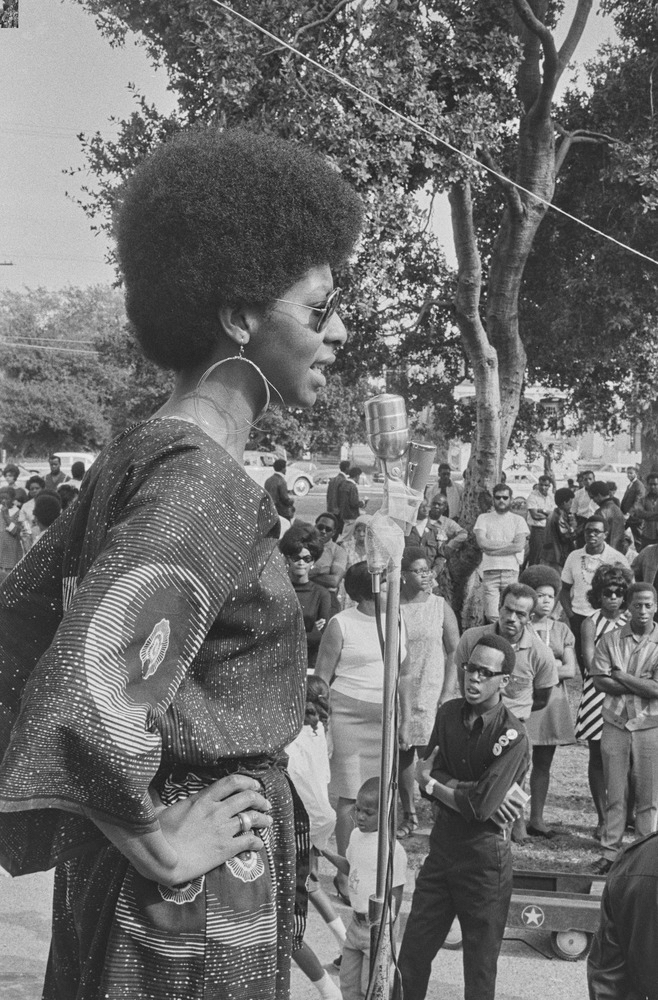 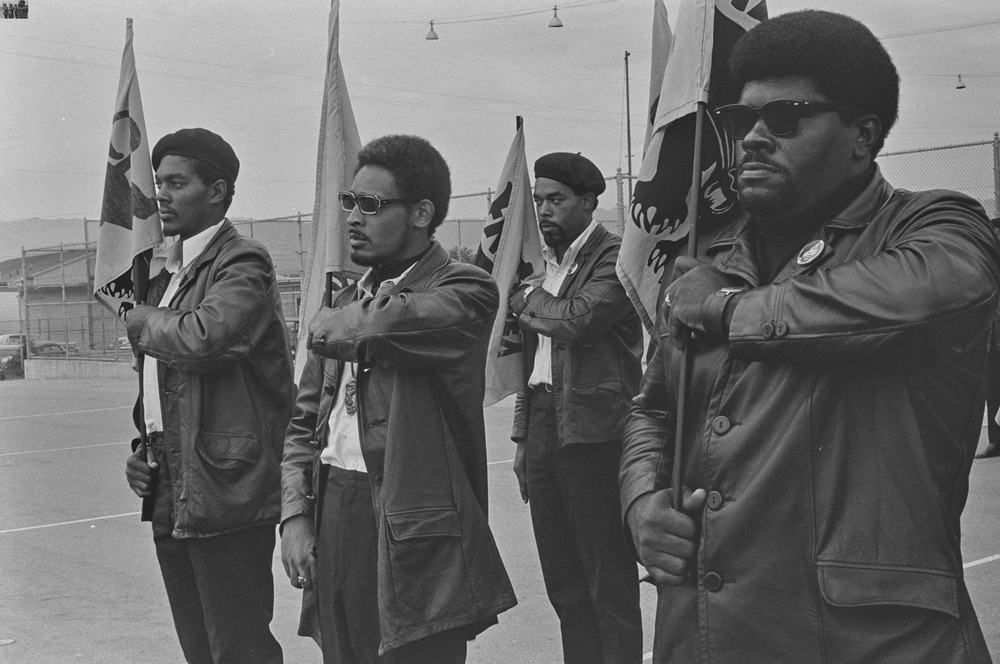 Pirkle Jones, Black Panthers in formation during drill, DeFremery Park, Oakland, CA, #57 from A Photographic Essay on The Black Panthers. 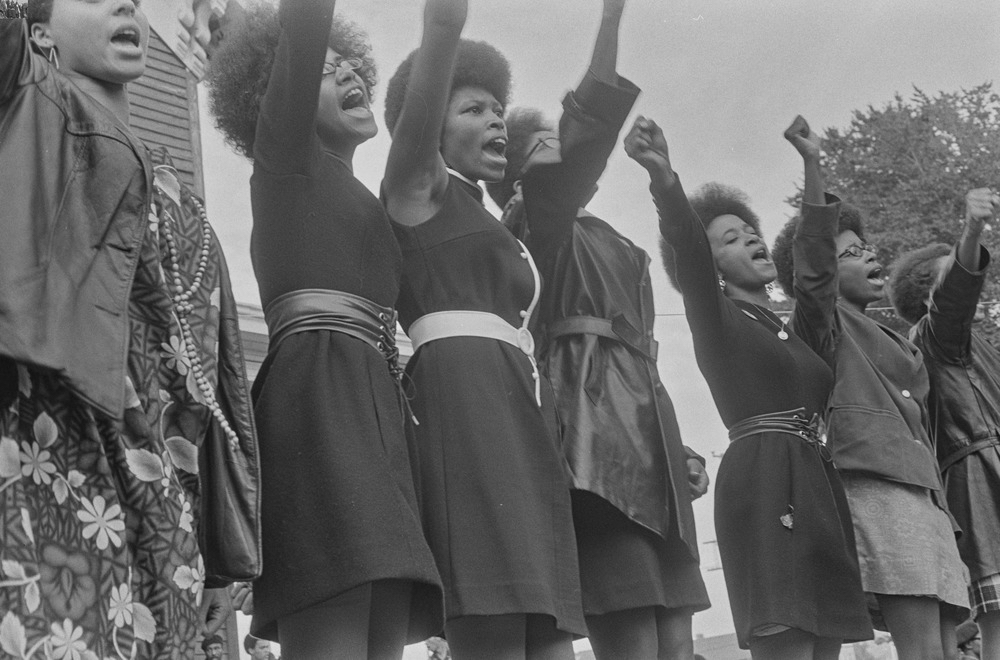 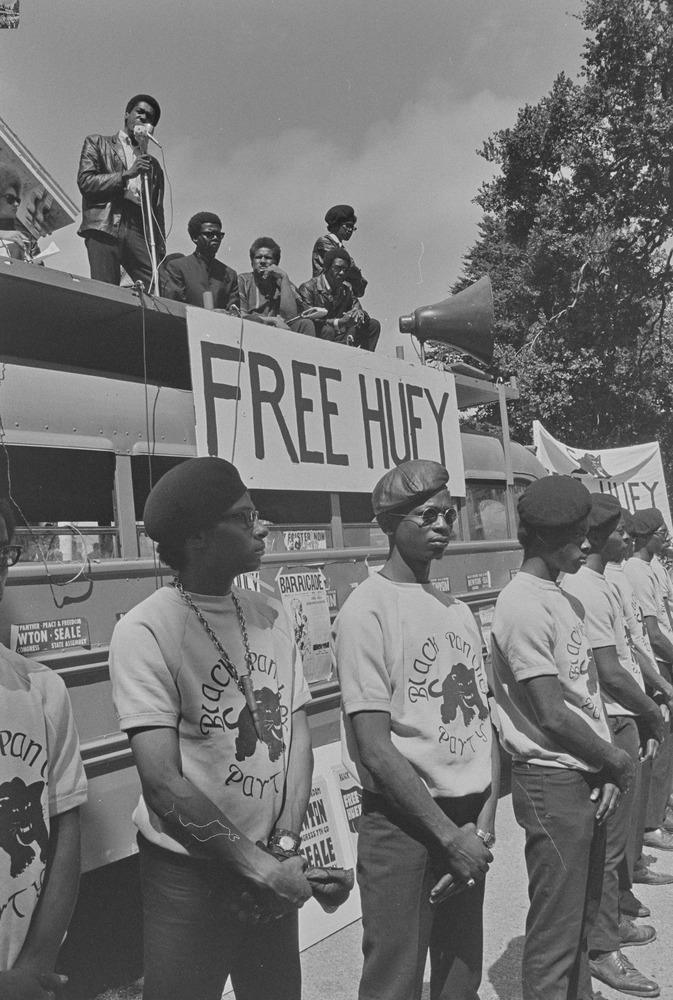 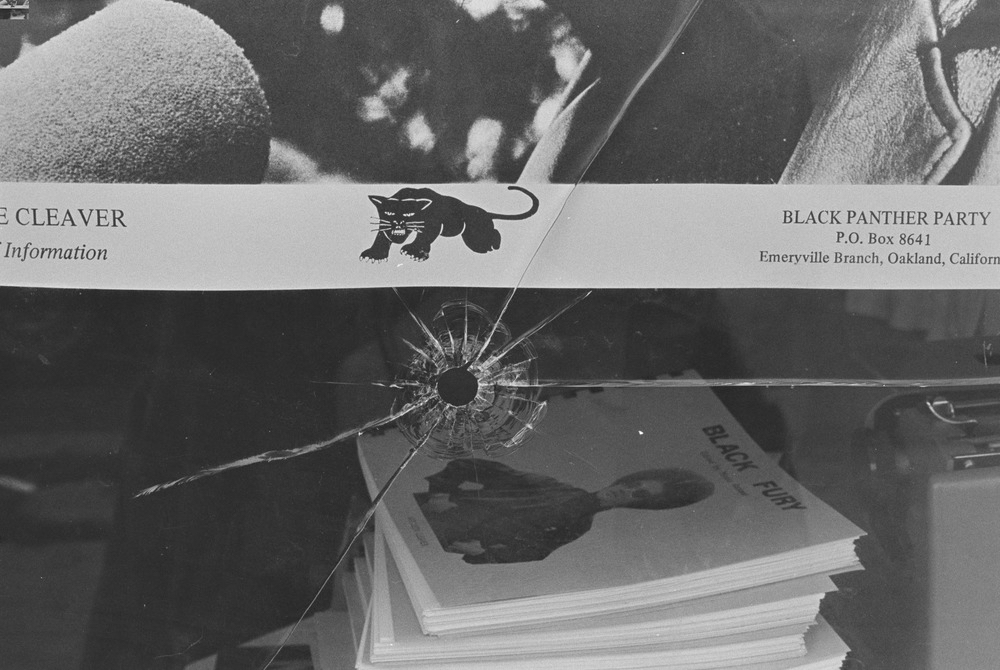 Linkedin
RELATED ARTICLES
OTHER ARTICLES
Rogue landlords are exploiting young and inexperienced renters and leaving them in mental and financial turmoil, reports Niall Hignett.
Ahead of the release of their first collaborative album, the producer and rapper talk psychedelics and the state of UK hip hop.
Following the announcement of an 80% hike in the energy price cap from 1st October, crowds gathered outside the offices of energy regulator Ofgem to protest and declare their intention to undertake a payment strike.
A group of young Palestinians have found temporary freedom in the act of parkour, reimagining wreckage and ruins as a series of high-octane playgrounds.
In his 2008 series, the photographer pictured himself as Angela Davis, Martin Luther King Jr., Malcolm X, and other prominent figures.
For over a decade, gamblers have won big by employing people to place live bets from the court. But does this dubious method still work?