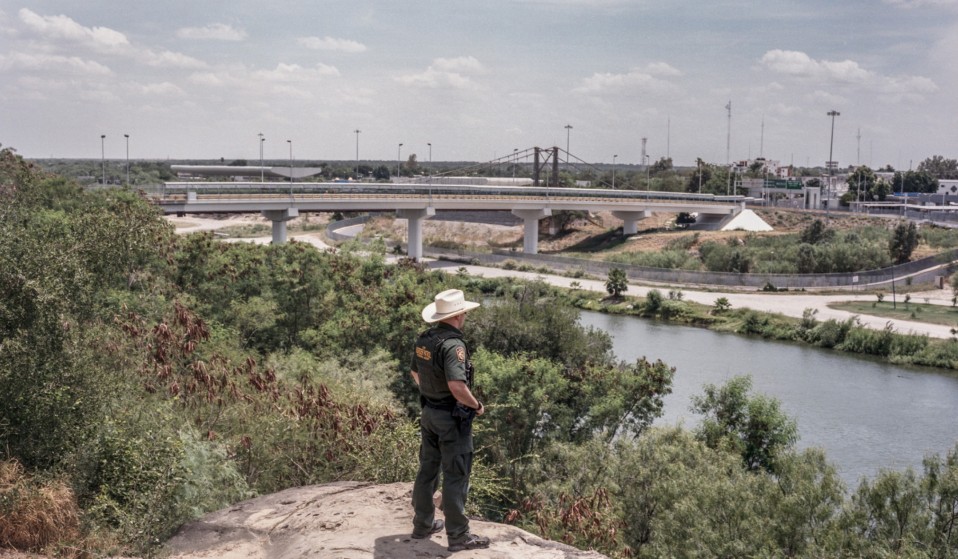 Growing up on the US-Mexico border, Dominic Bracco II knows people who walk a fine line between right and wrong. He’s seen good folks do bad things. To capture that nuance, he put down his camera, picked up a pen and scripted the space in-between.

I can’t even remember what year it was, but it was cold. We climbed up the hill to a cinder-block house that overlooked Juárez and got drunk on two-litre beers and whiskey mixed with Squirt. At this point, I’d been photographing these kids for several years and they’d changed from subjects to close friends. Most were about my age – maybe a couple of years younger. My friend Jorge and I kept watching the door, waiting for someone to come in and shoot us all. It was a normal feeling at that time in my life, but that night it was more present because some of the guys let slip that they’d murdered some rivals a few days before.

This was how problems were worked out here. They were retaliating for a series of robberies and the rape of an older woman in their neighbourhood. In a town and at a time where the police were the same as the cartel, and the only person you could turn to was your homie, it was a logical solution to impunity. At least for them. Of course, I wasn’t from Juárez. I grew up across the border in Texas, on the side where we had lots of things in common, but also a lot that we didn’t.

Being a documentary photographer is a weird profession. We spend tons of time with people and get to know them, and then tell ourselves that we’re making some representative work that is somehow important or valuable for society. I used to feel this way. I dug into the social implications of the North American Free Trade Agreement on Mexican border towns like Juárez. I worked with street gangs and cartel guys. I covered violence. At the end of those years, I came home with pictures. A handful of photographs that barely added up to a few minutes of my life and what I had seen. 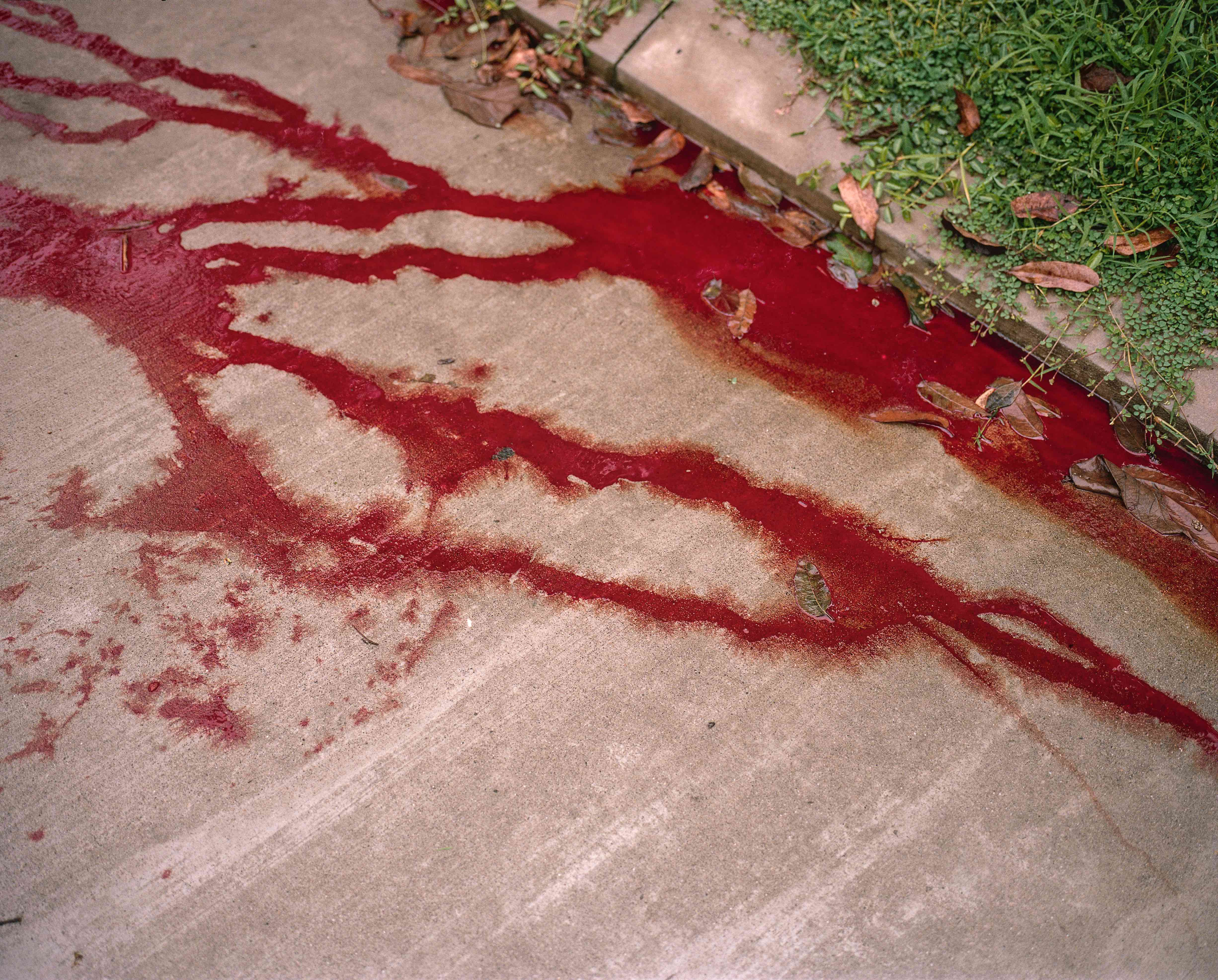 The blood of two brothers and their friend in San Pedro Sula.

I grew up in a family that’s been in Texas since it was part of Mexico, and part of Spain before that, which is a long way of saying I grew up super Catholic. I also grew up around human traffickers and drug dealers; some were members of my own family or close friends. I’ve seen good people do horrible things. And bad ones do good. This isn’t an easy thing to fit into a photograph. Morality can be shown, but a picture will always leave out nuance and context.

About five years ago I began to write fiction as a way to process what I had seen as a photographer and also ask questions about my own identity and moral worldview. I didn’t realise it then, but I had begun a process that I now do with all of my work about the borderlands.

Now I make photographs as a form of note-taking and then attempt to piece them together and make derivative works based on that documentary material. It’s taken me years to focus my process but it always comes from looking deeply at the same place through different paradigms and then realising my own shortcomings as a photographer to express really complex ideas. Sometimes the best way to tell a story is to literally just tell it. But I wouldn’t have understood what I wanted to say without having been on the field making pictures.

My work lives in the grey space that makes everyone uncomfortable, including me. I’m not sure that it makes a comment on anything other than the fact that we are all human and capable of doing good and bad. 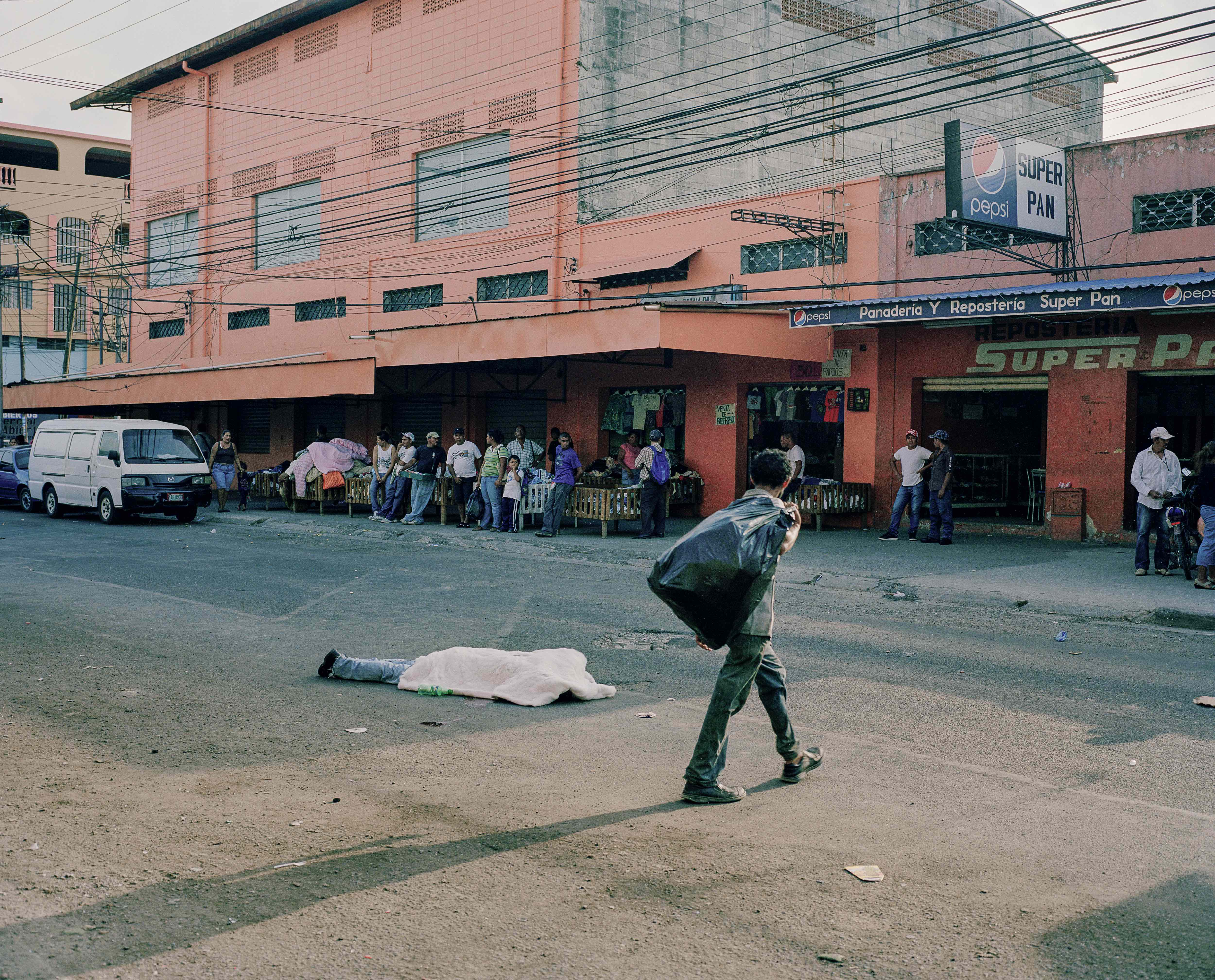 Merchants in San Pedro Sula, go about their business while a body lies in the middle of the street. Dead bodies sit for hours before the coroner has time to pick them up.

I use fiction because it’s freeing. It allows me to use bits of dialogue and pieces of reality and mix them with archetypes of people that I meet. In a way, it’s not all that different from editing down thousands of photographs into a tight, concise body of work. The pictures then live alongside the narrative story. Each medium reinforcing the other.

This last year, with the help of the Tim Hetherington Visionary Award, I was able to dedicate time to turning my work into a transmedia experience. We did a show, Paso del Norte, at the Casa De El Hijo Del Ahuizote, a museum in Mexico City where I live, with sculpture, photography, several video pieces and four actors who interacted with the installation. They performed three scenes from my novel that all had to do with the idea of how our environment shapes our actions.

For a long time, I was trying to evoke empathy. Lately, I’ve been unsure how capable I am of doing so. I want people to understand that they’re part of a larger whole. We all do things that affect those around us from interpersonal to international in the way that we vote and even the conversations that we choose to have. Maybe I just want people to try for a minute to stop being shitty to each other. But as photographers, we face a challenge: what does it take to move people today when we’re surrounded by so much imagery? I find trapping them into a confined space works really well. 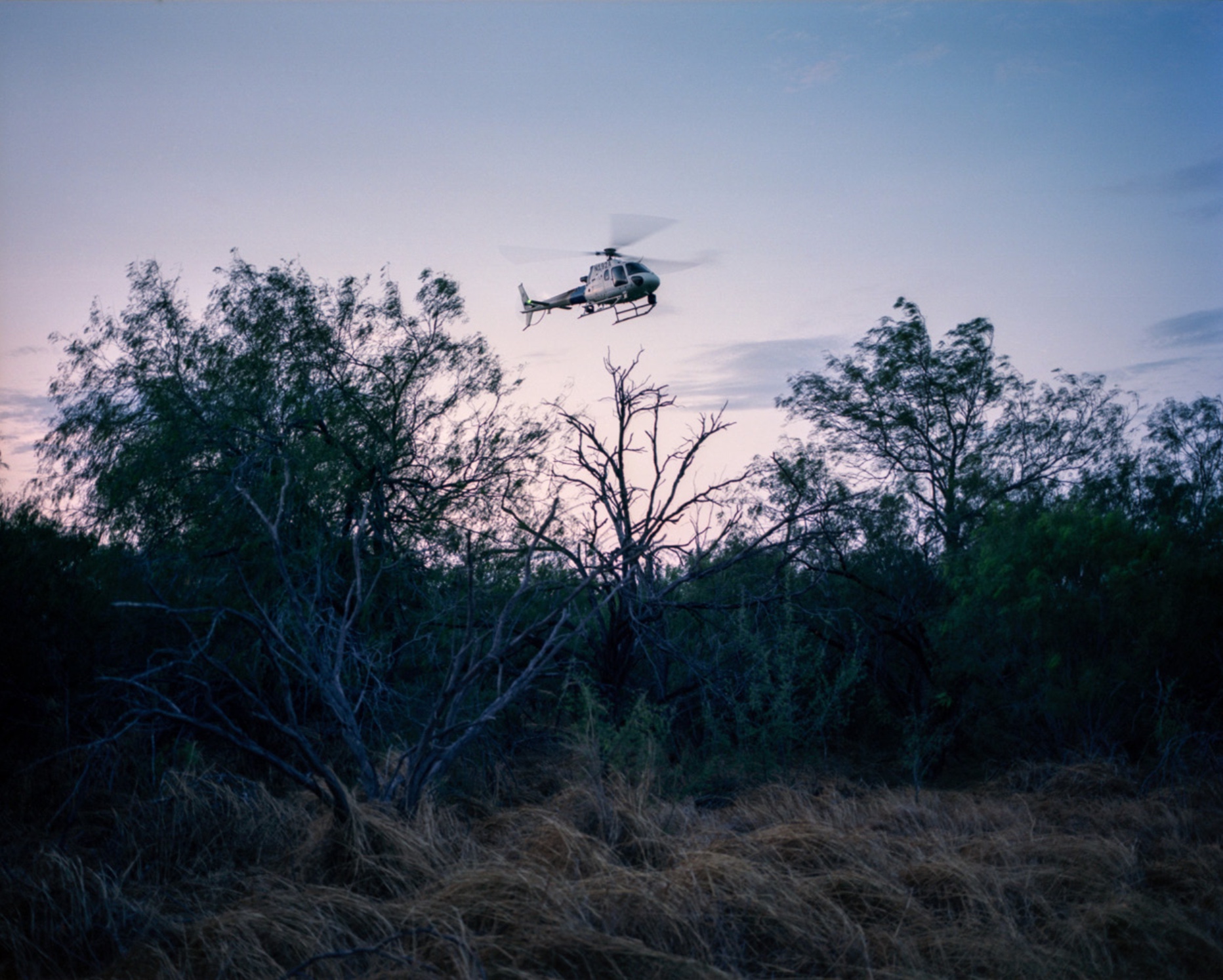 A US Border Patrol helicopter searches the brush for two men who were spotted by agents. They were never found. 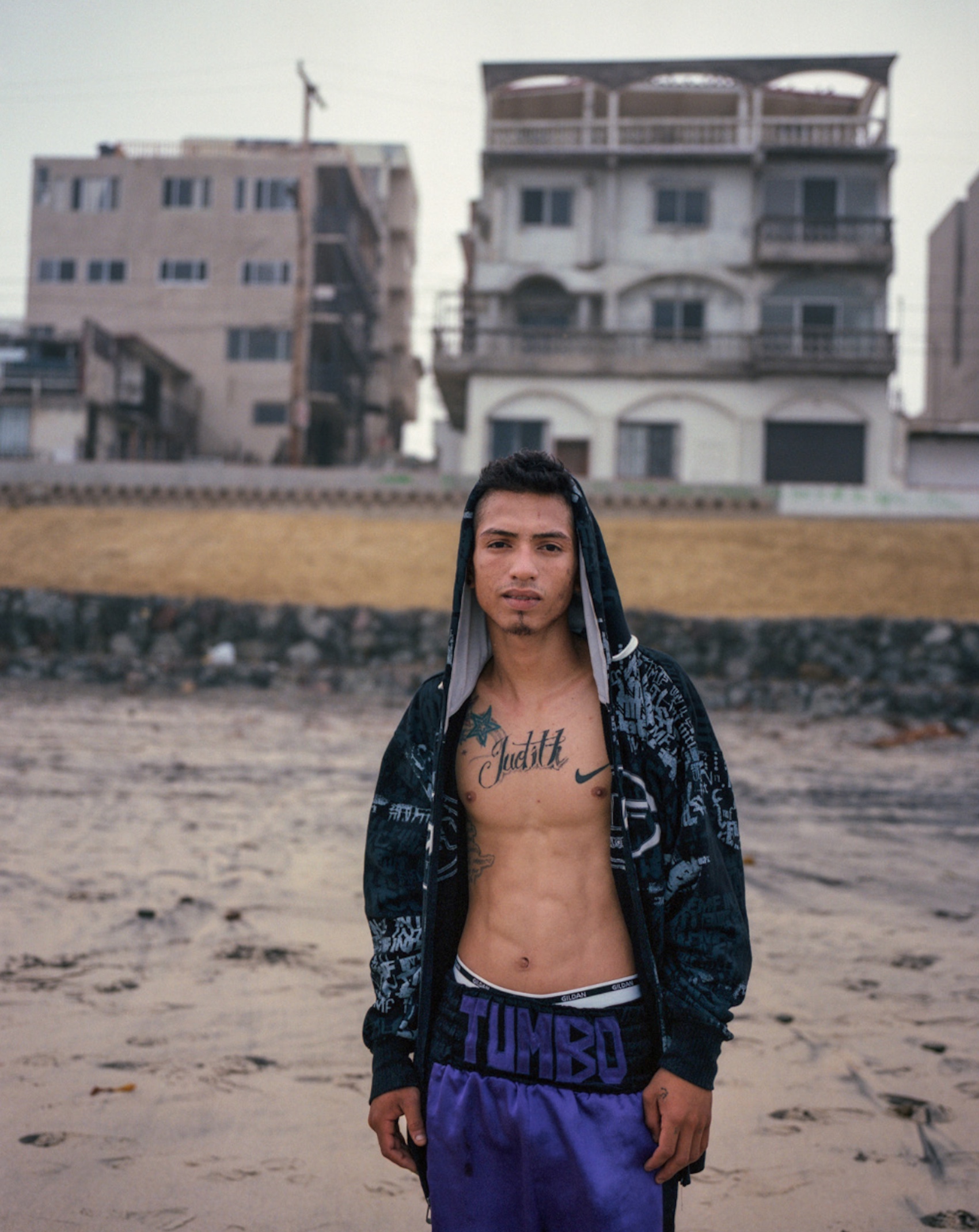 Boxer Javier “El Tumbo” Rios poses for a portrait on the beach in the Playas neighbourhood of Tijuana near the US Mexico border. 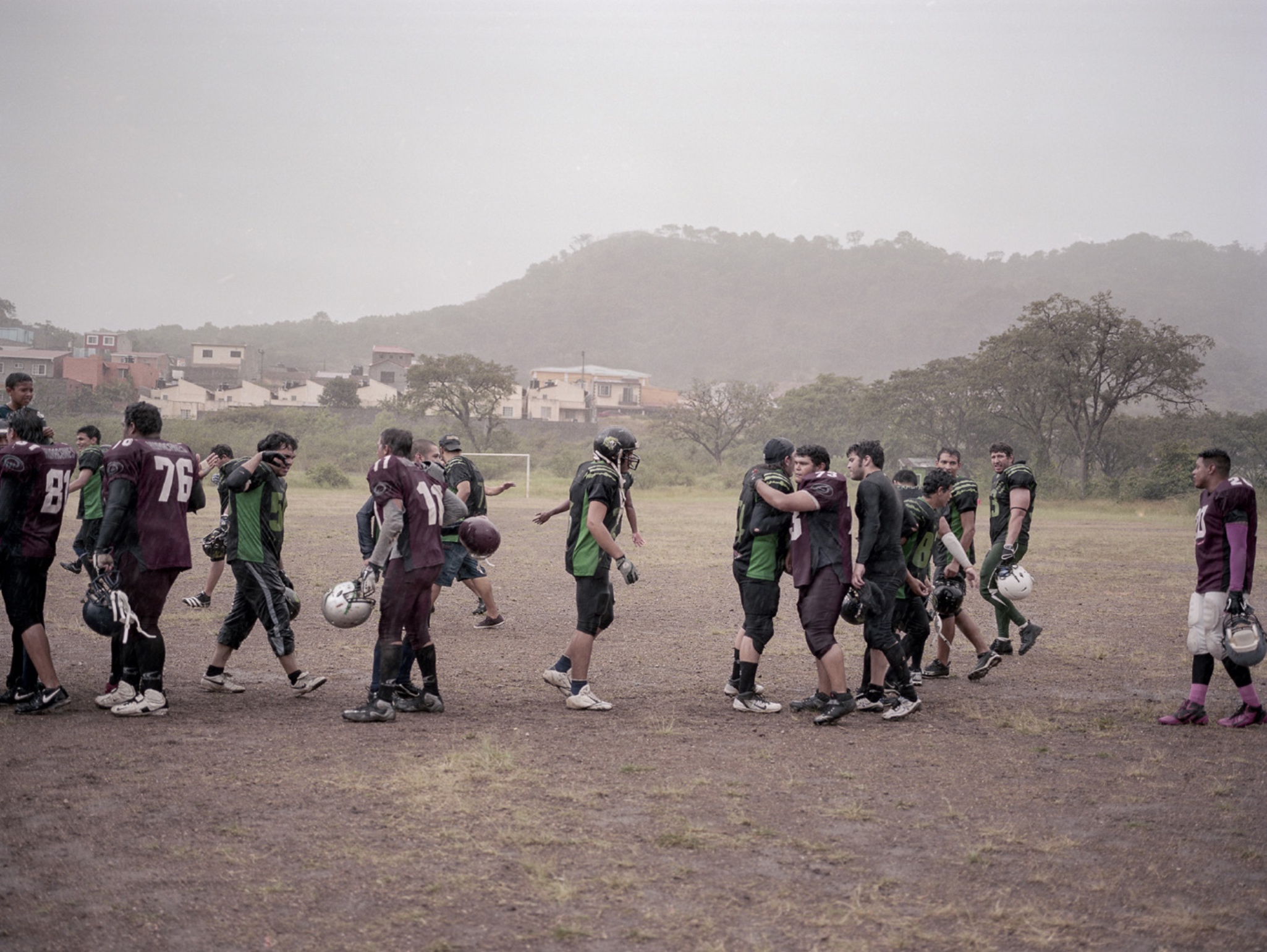 Two teams from the Honduran National American Football League congratulate each other in the rain after a game. 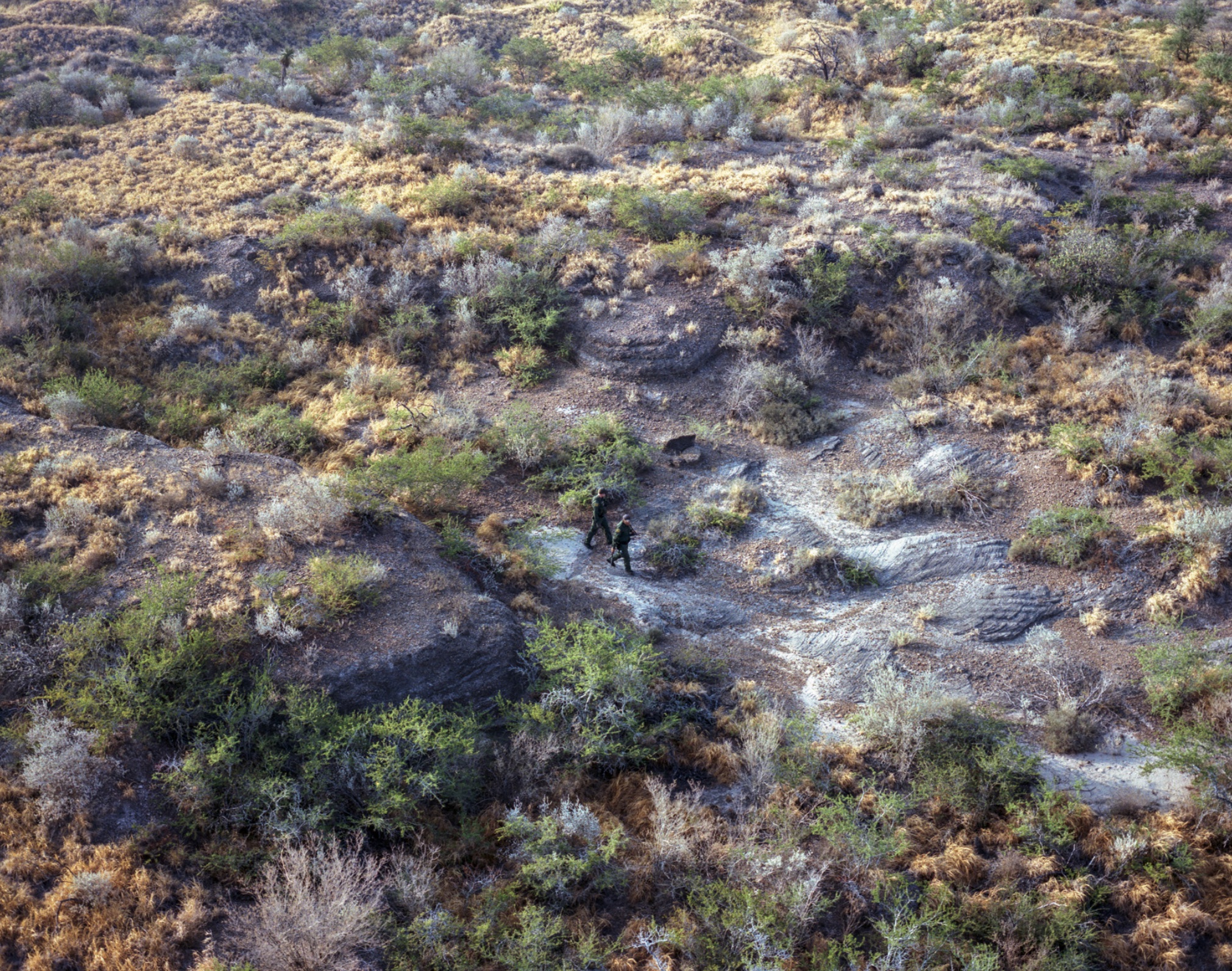 US Border Patrol search for a migrant group on a ranch in South Texas. 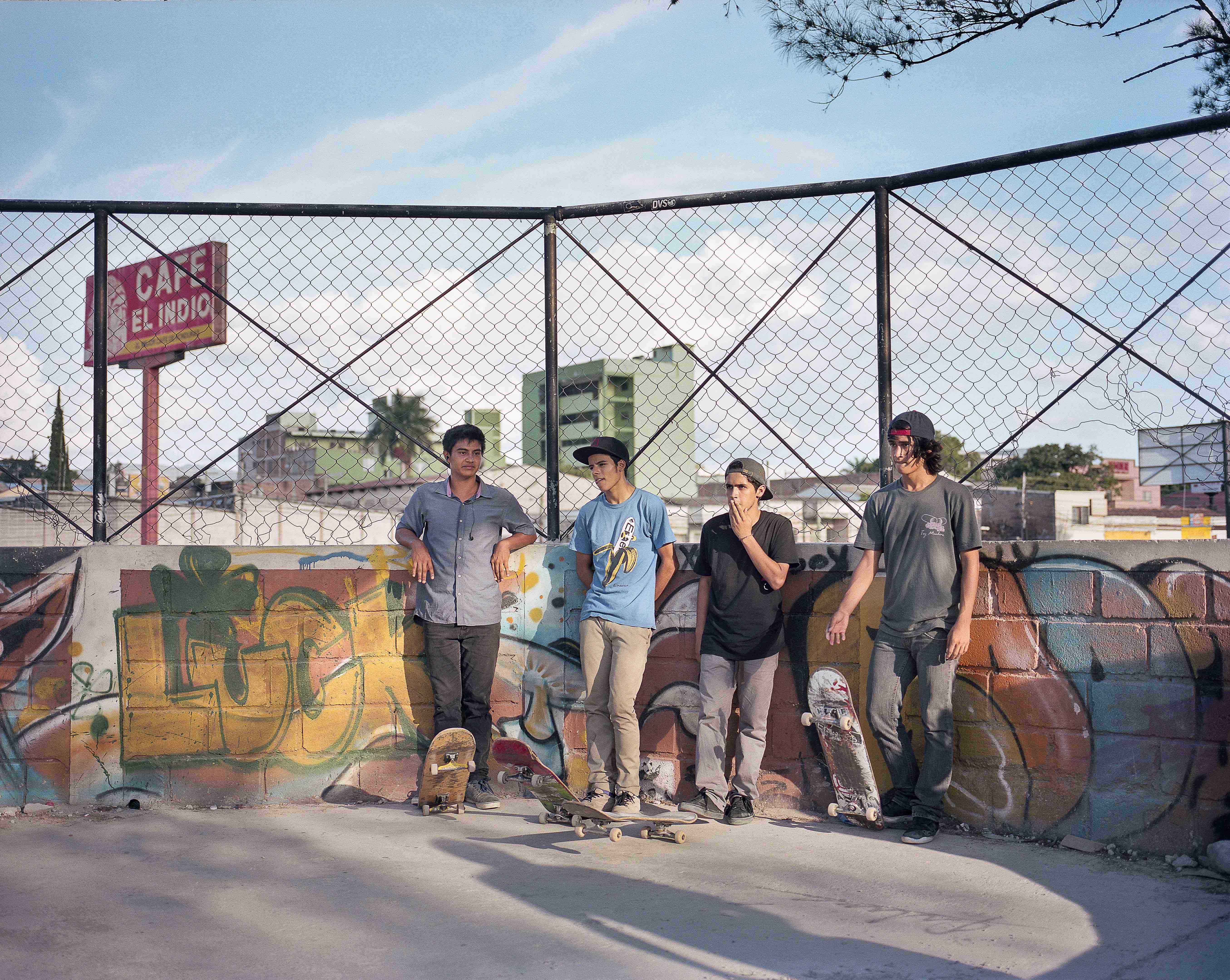 Boys hang out in the gang-controlled El ‘Ove Park in Tegucigalpa, Honduras.

Linkedin
RELATED ARTICLES
OTHER ARTICLES
Filmmaker Laura Poitras discusses her new documentary which traces the remarkable life of the artist-activist and the impact of her battle against the US opioid crisis.
Tristan O’Neill’s shots of dancers caught in moments of reverie at the height of rave’s golden age are a testament to the UK’s legendary club culture.
Following the release of his debut single, Deyaz talks battling addiction, dealing with his struggles through music, and building a budding music career from his living room.
The action took place in response to the 200 asylum-seeking children who were placed in hotels run by the Home Office who have gone missing.
Photographer Becky Tyrell went down to the fading banger and stock raceway to meet a community desperate to keep it alive.
Theo McInnes’s photos of the annual event provide an intriguing snapshot of contemporary Britain.