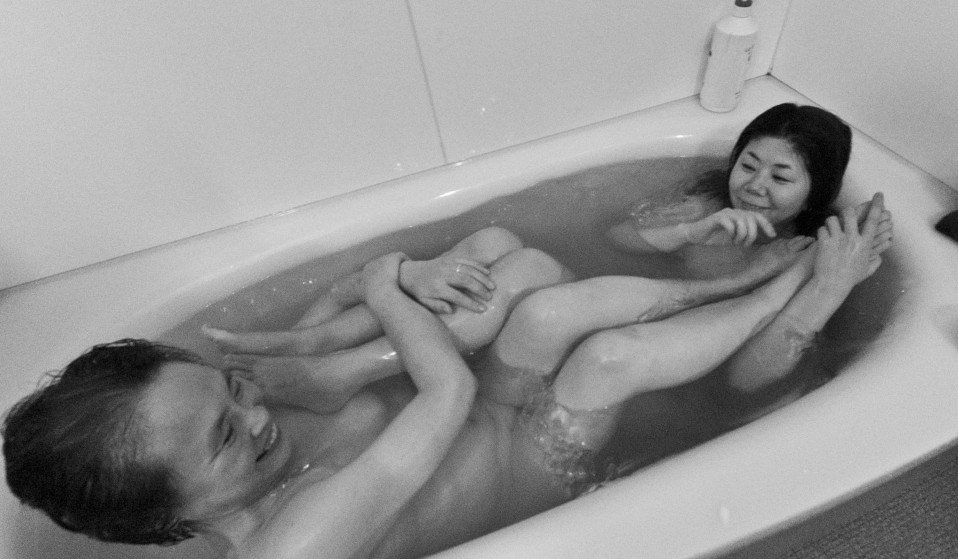 Photographer Michel Delsol and journalist Haruku Shinozaki focus their lenses on the queer world behind the closed doors of modern Japanese society.

Photographer Michel Delsol and journalist Haruku Shinozaki focus their lenses on the queer world behind the closed doors of modern Japanese society.

Both religious and warrior orders in Japan have long recognised traditions of same-sex love, from the Buddhist clergy to the noble samurai military. But despite this rich history, the LGBTQ community in Japan continues to face many challenges today.

“Same sex activity was actually only ever banned for a ten year period,” Michel Delsol tells me via Skype from his home in New York City. “It was when Japan reopened to the world circa 1873. The Emperor, under American influence, imposed laws stopping same gender sex.” By 1880, the law had been reversed. It took until 1967 for the United Kingdom to catch up.

But unlike in Europe or the United States, where hostility towards LGBT people has long been steeped in Judeo-Christian teaching, resistance to LGBT people in Japan is much more to do with the country’s socially conservative culture, and was never imposed or reproduced by harsh legislation. And it remains prescient today: equal marriage is still a distant dream, sexual orientation is not protected by national civil rights law.

It’s something that both Michel and his collaborator Haruku Shinozaki encountered over their two five-week visits to the Japanese islands when working on their latest project, Edges of the Rainbow, a photographic celebration of the queer community in Japan. It’s a book that carefully approaches the nuances in sexuality stigma and shame that are so often glossed over by those documenting Japan’s community of queers.

From the bustling streets of Tokyo’s Shinjuku Ni-chome district to remote and tranquil villages, LGBT life is everywhere in Japan if you know where to look for it. These are just some of the people who they met along the way. 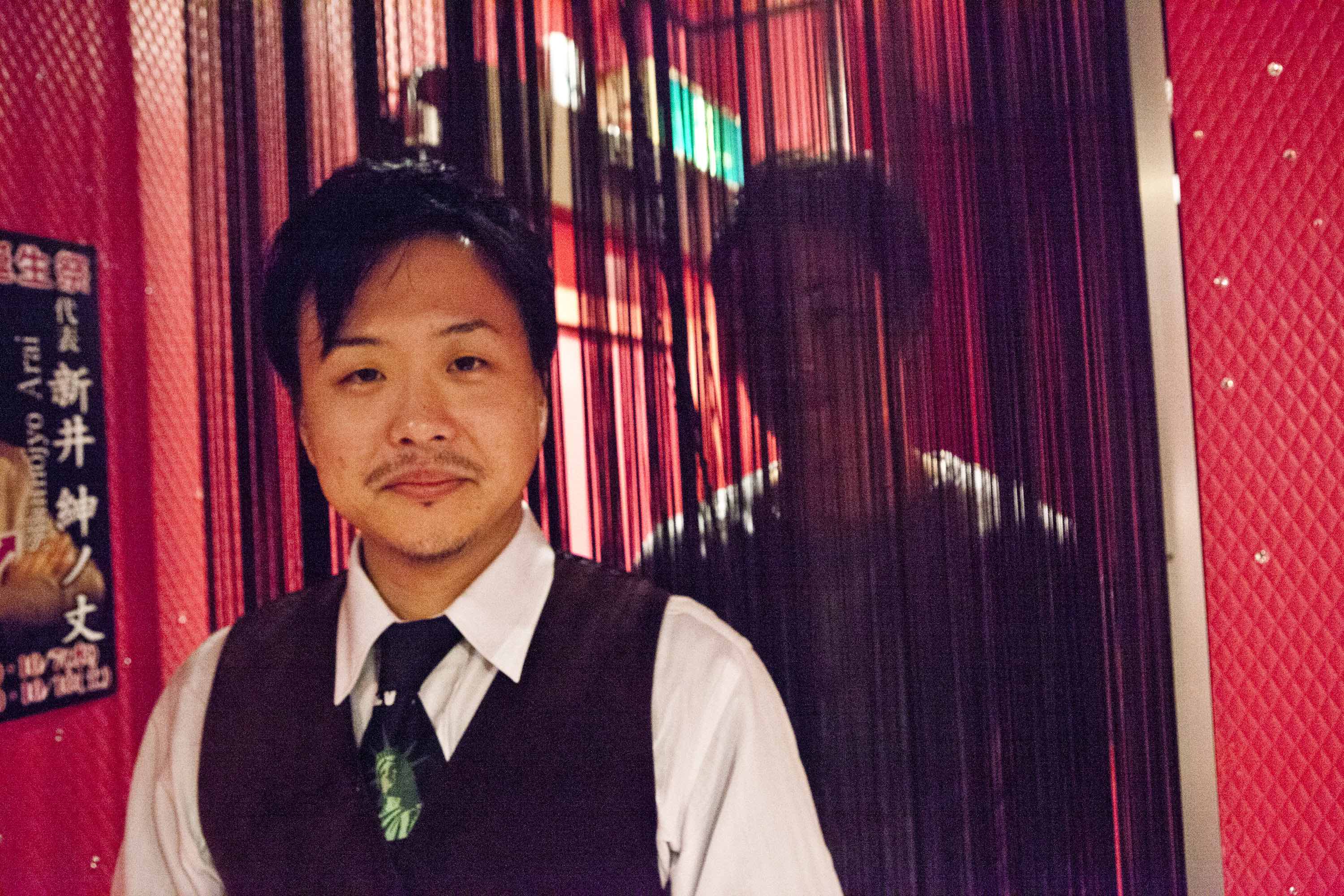 Keiki and his friend in a small nightclub in Yokohama.

Keiki is a tarot card reader. He lives with his wife in Niigata, a major metropolitan centre northwest of Tokyo.

Keiki is a trans male and an LGBTQ community activist. He founded Love 1 Peace, which organises conferences and group discussions, often followed by potluck dinners. The organisation is mixed: roughly 30 percent of the members are cisgender and/or straight. Keiki is in the process of setting up a support group for parents of LGBTQ sons and daughters so they can learn ways to discuss sexuality with their children. 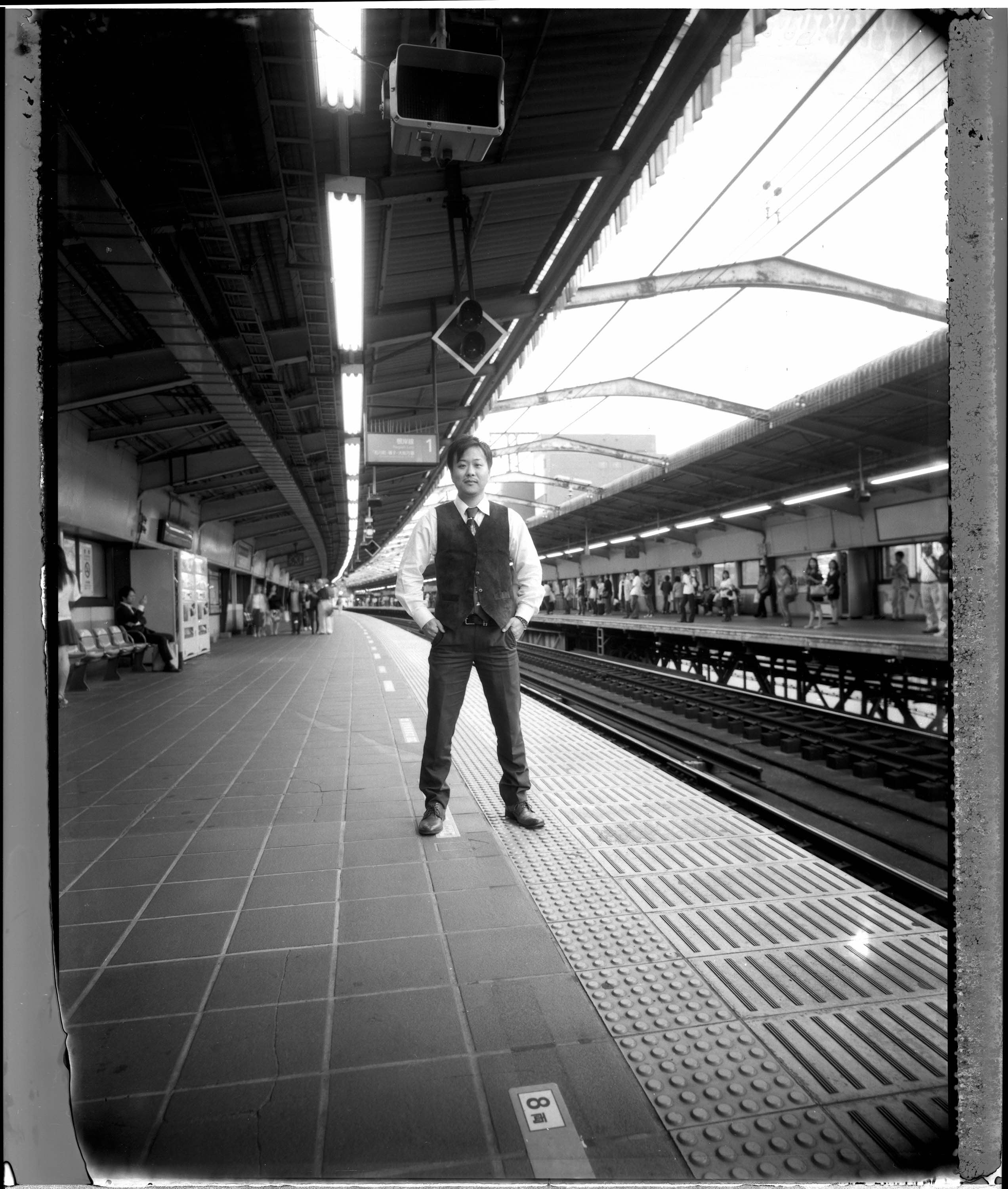 As a child, Keiki was always playing with boys and referred to himself as male. When he was four or five, he was given an expensive skirt. He hated it, he recalls. He wanted to wear pants, so he cut it up with a pair of scissors.

Around nineteen he came out to his friends, and around twenty to his mother, but not to his father. Her response was: “It’s your life. Do what you want.” 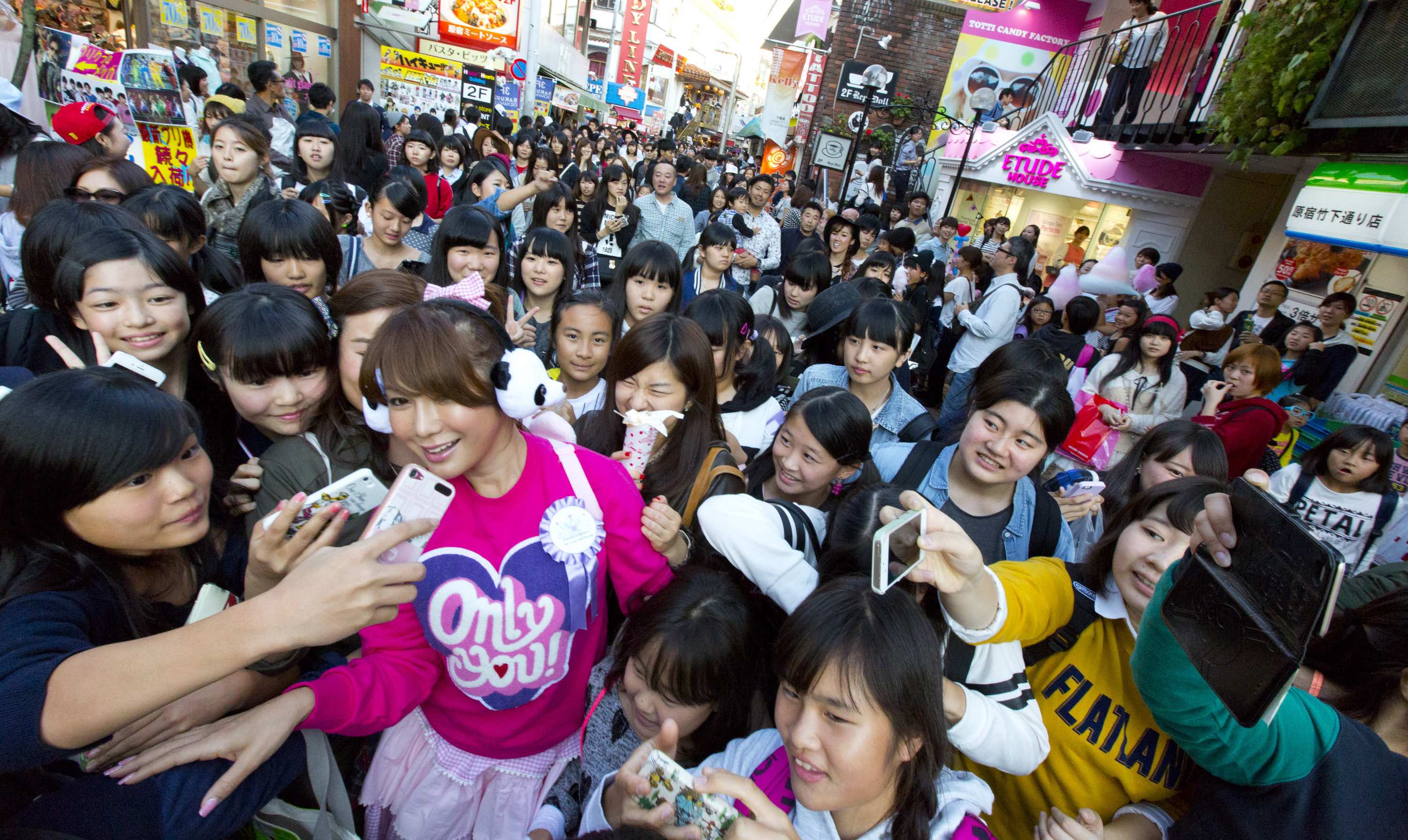 Ai Haruna surrounded by fans in Harajuku, a street popular with teenagers in Tokyo.

Ai Haruna is a civil rights activist and pop idol. She started her career as a drag queen in small clubs and cabarets in Tokyo, then as a singer and guest on television and radio talk shows. Currently she is one of the hosts of the prime-time show about fighting prejudice, Barrier Free, on Japan’s national public broadcasting network, NHK 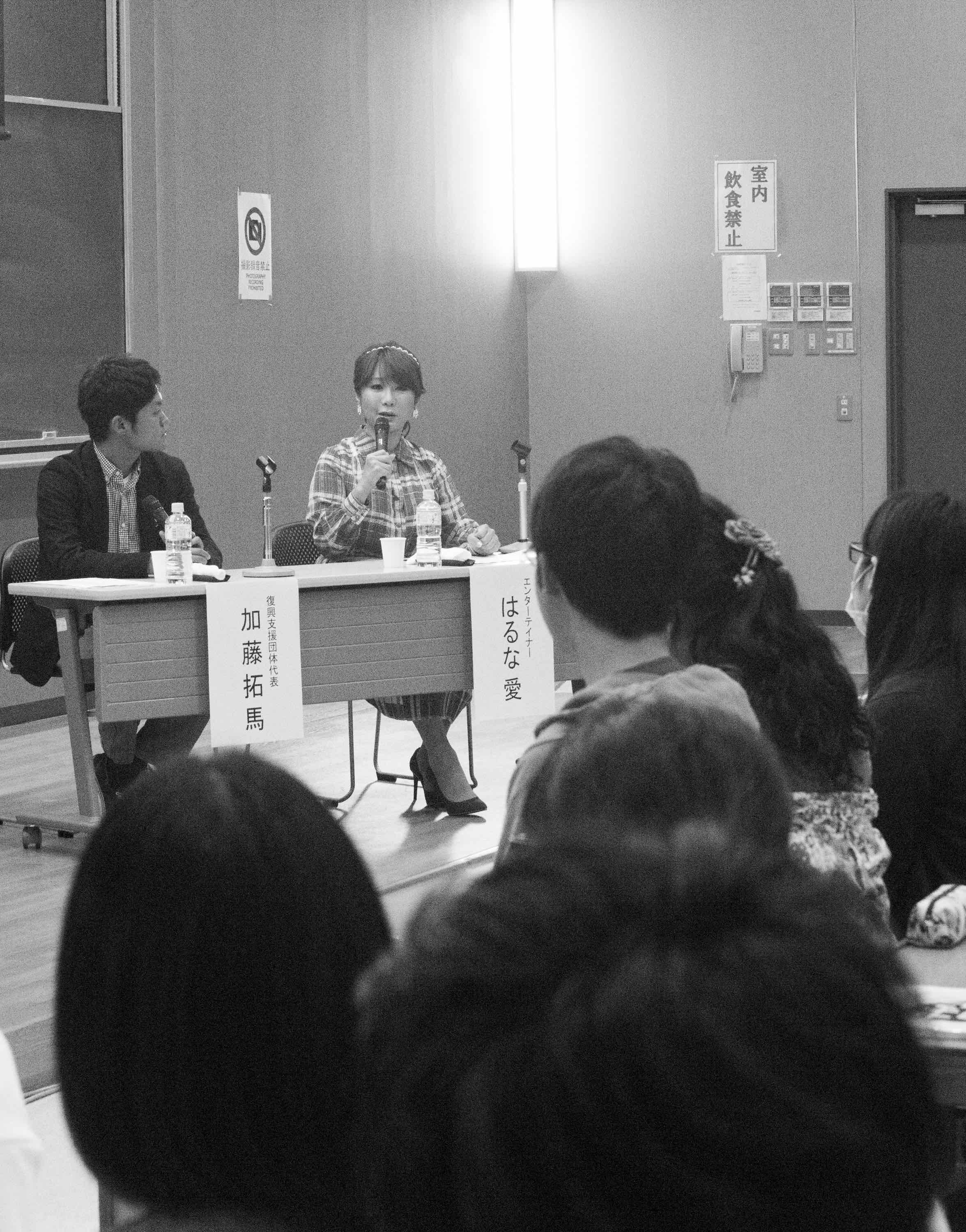 Ai Haruna speaks at a conference about the importance of being a volunteer at the University of Health and Welfare of Otawara , Tochigi prefecture.

Ai Haruna is a trans woman —also known in Japanese as a “newhalf.” Her chosen name, Ai, means love in Japanese. A rare positive role model in contemporary Japanese queer culture, she works to help people challenge sexual and gender norms and to bring comfort to many who feel isolated from the society around them. 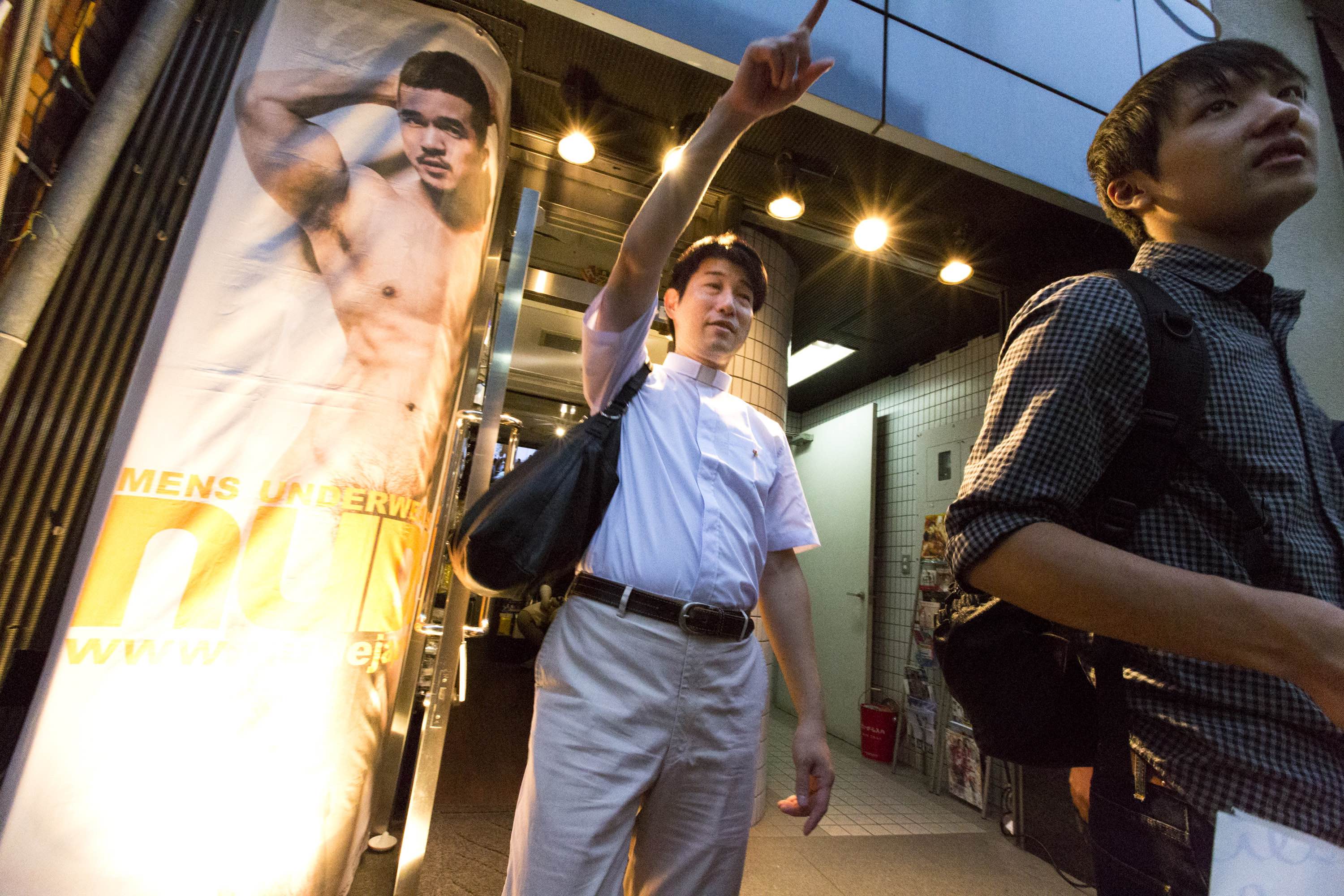 Yoshiki, an Episcopal priest guiding university students on a gender and sexuality historical landmark tour of Tokyo. Here they are exiting a bookstore in Ni-Chome, the LGBTQ district of Tokyo.

Yoshiki is an Episcopal priest. Every Sunday, he conducts a prayer and worship service for the LGBTQ community and their supporters in a “church” in the Ni-cho–me district of Tokyo.

Religious from a young age, Yoshiki originally studied to become a Catholic priest, but on completing his studies, he decided to become an Episcopal priest because the Catholic Church would not accept a gay priest. “I’ve had a partner for fifteen years,” he says. “We celebrated our civil partnership at the Shinjuku Community Church. It was officiated by a friend who is also a priest, but in the census we aren’t registered as legally married.” 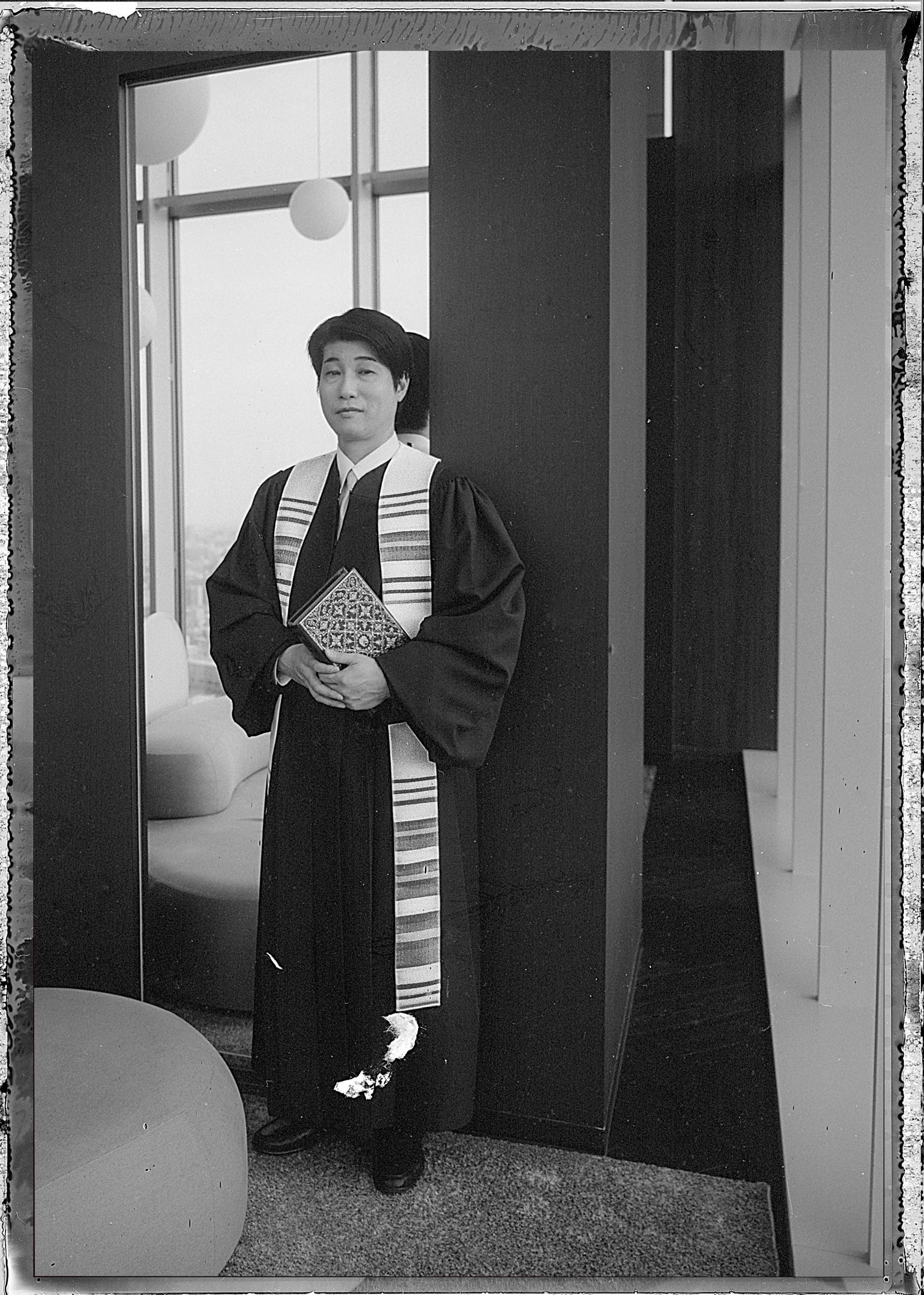 Yoshiki and his partner, K, live in the Shinonome district of Tokyo. They live separately for now, but K lives only one building away from Yoshiki. 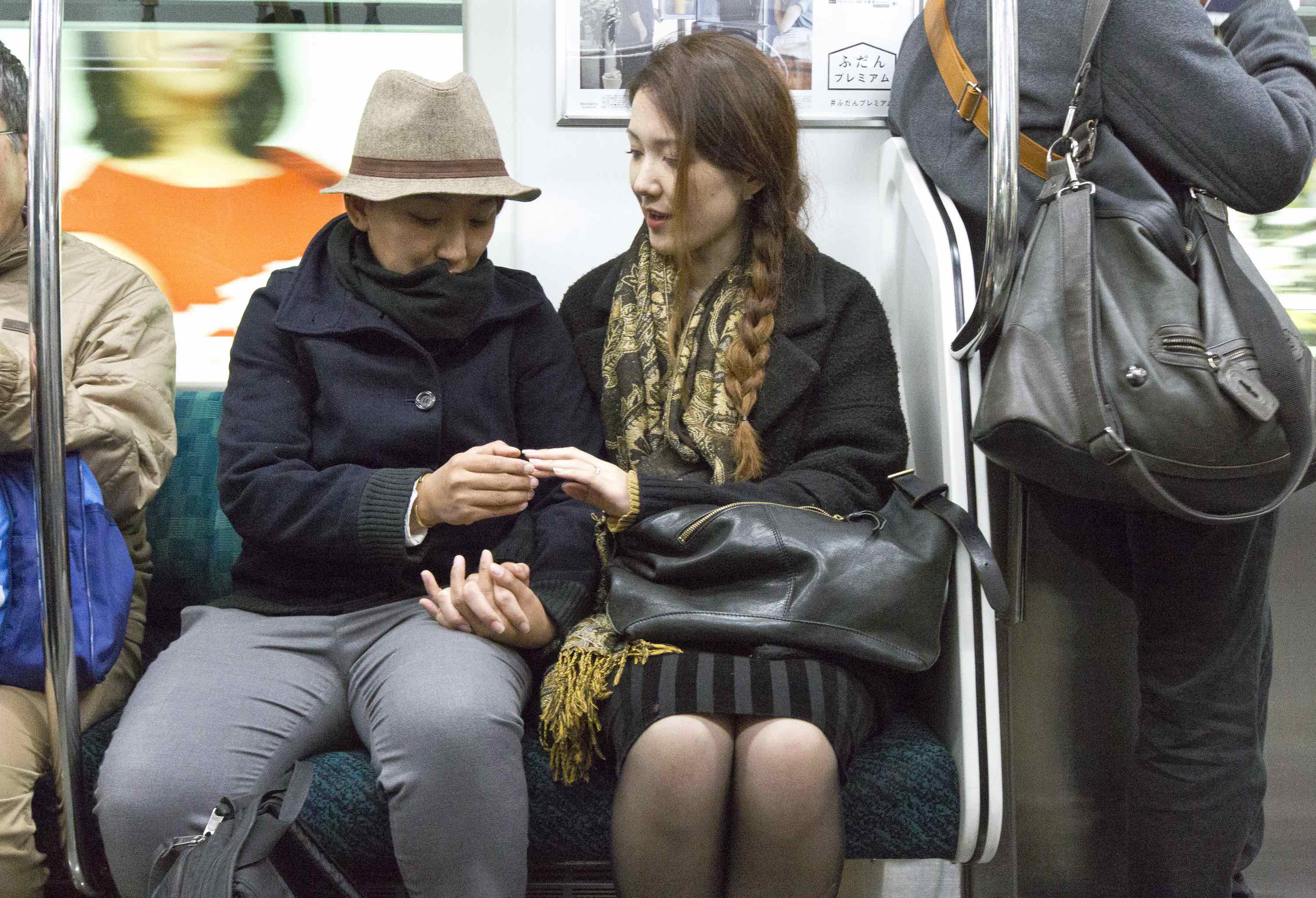 Maika and Natsue on the subway on their way back from work.

Natsue and Maika are civil partners. They share an apartment with Natsue’s father in Nerima in the suburbs of Tokyo. While Maika has identified as a lesbian since she was a teenager, this is Natsue’s first relationship with a woman.

Even before she realised she was a lesbian, Maika had an intuition she liked women. She first fell in love when she was thirteen or fourteen, but she could not tell the girl because she felt it was not right. 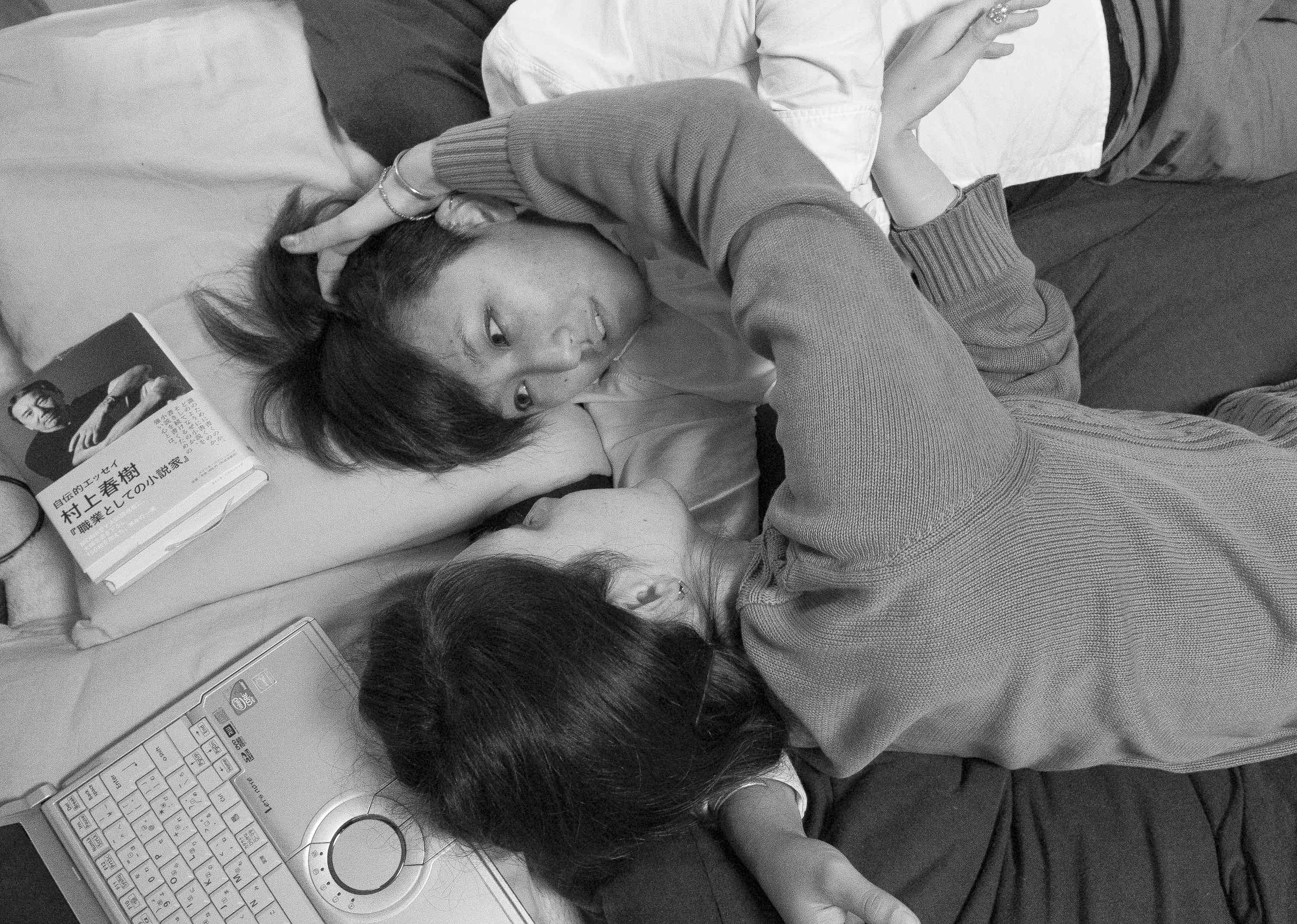 Natsue and Maika first met at the Tokyo offices of the NGO Peace Boat, where they both worked. Maika was seeing another woman at the time, while Natsue had a boyfriend. Five years later, Natsue and Maika became lovers. When Natsue told her father that she was dating Maika, her father lovingly said, “I know. Just looking at the two of you, I knew.”

Natsue and Maika are often invited to talk about their life choices at universities and on radio and TV programmes. 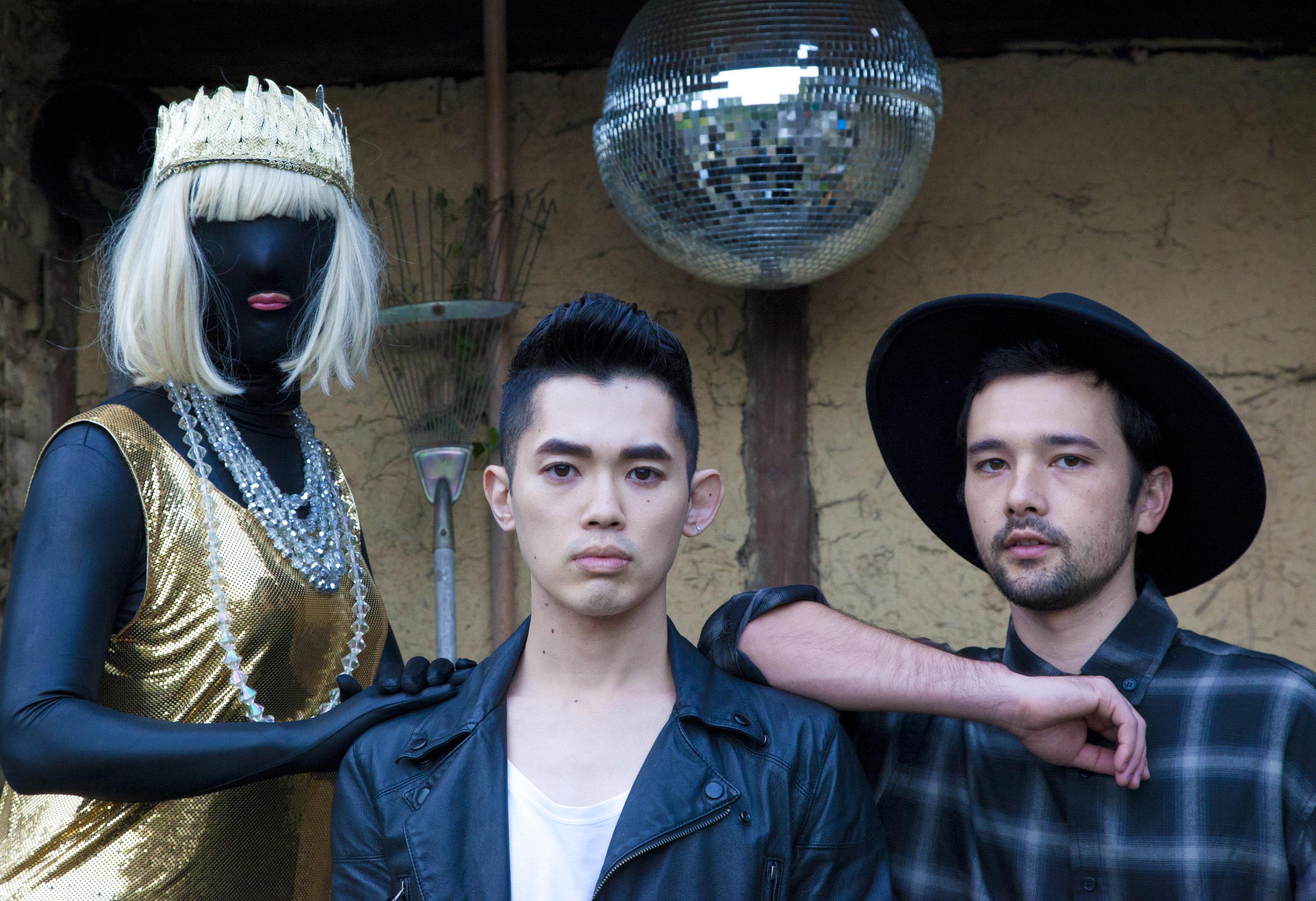 Apotheke is an electronic music group that addresses LGBTQ culture through pop music. Nori, the producer and manager of Apotheke, conceived of the group as an art project with a social dimension. The group, which most recently released the hit “Supergays,” is comprised of Nori, singer Shingo, dancer and art director Gosuke, composer and turntablist Robin, and composer Ikuo. 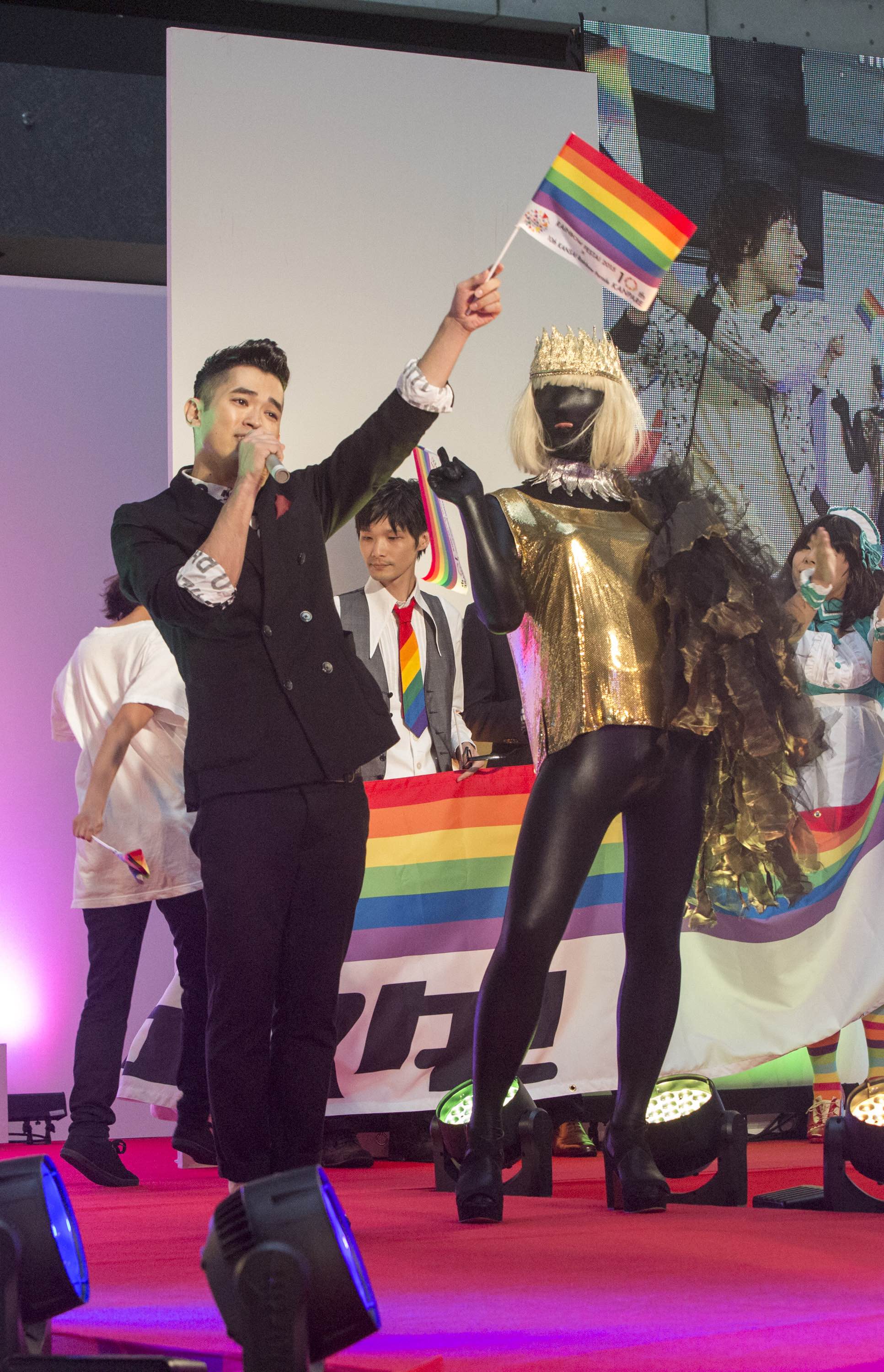 Nori first met Ikuo, Gosuke, and Robin in Berlin, where they had all been living to pursue their music. Shingo joined the band after they returned to Japan. Now living in a loosely communal arrangement in a country village outside Osaka, they perform in clubs and festivals in Osaka, Kyoto, and Tokyo and on radio and television. 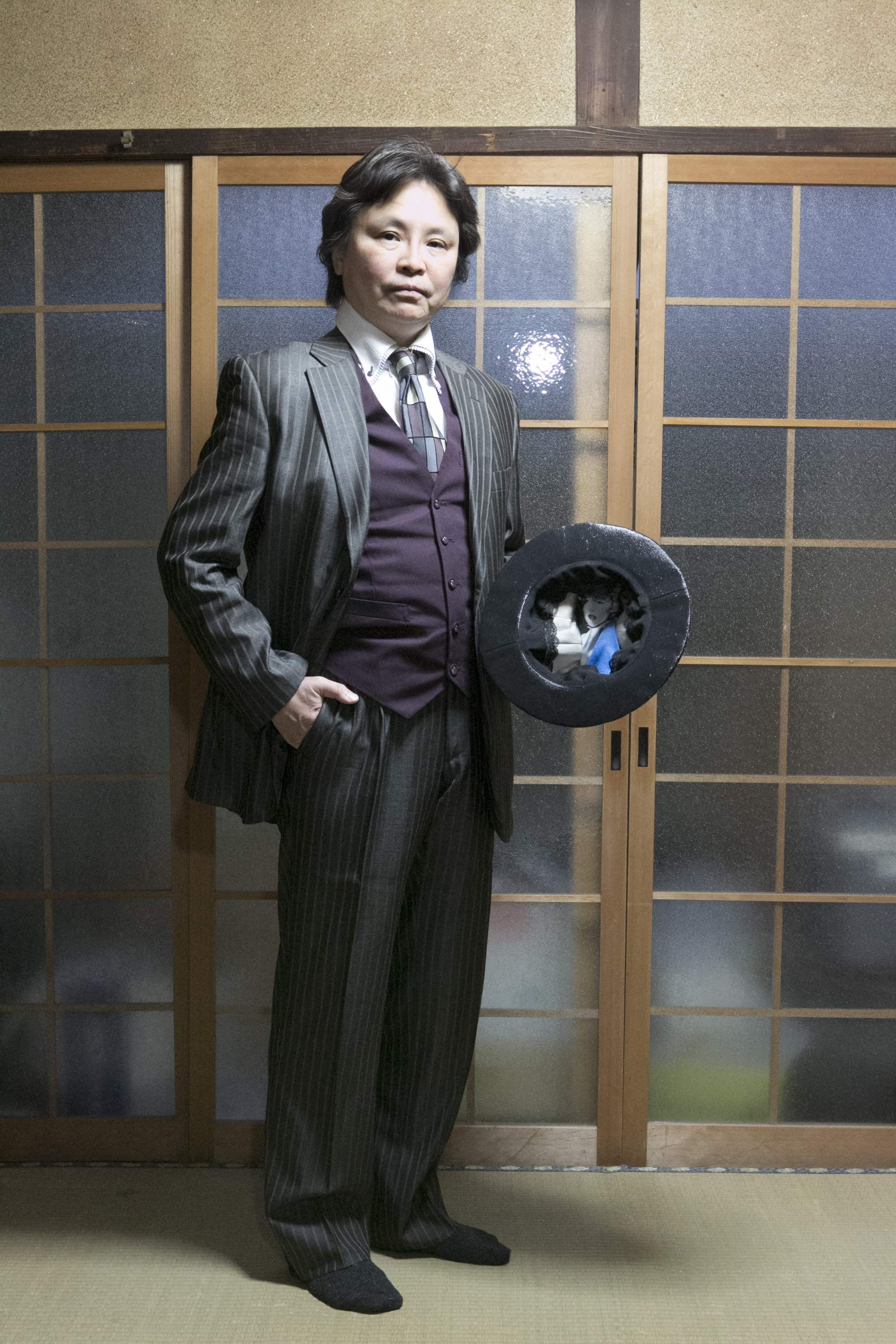 Tatsuki, who is intersex, was born in a hospital in Nara in central Japan, where the doctors designated him neither male nor female but “other.”

In elementary school, Tatsuki was registered as female. In his co-ed junior high school and high school he was considered male or female depending on the teacher. Sometimes he was placed in the boys group, sometimes in the girls group. He now identifies as male. Tatsuki is a publisher of handmade notebooks and diaries. He lives with his wife, Eishin, a Reiki healer and practicing Buddhist, in Kyoto.

Eishin proposed to Tatsuki on their first meeting. At the time, she didn’t know that he was intersex. “I like you not because you’re a man,” she told him. “I just like you because you’re you.”

All images copyright © 2017 by Michel Delsol and Haruku Shinozaki, Edges of the Rainbow: LGBTQ Japan, published by The New Press. Reproduced here with permission.

Linkedin
RELATED ARTICLES
OTHER ARTICLES
After fleeing the war in Ukraine, people are finding it impossible to secure affordable and decent housing in the UK.
Jeffrey Henson Scales intimate portraits and protest images of the BPP and its leaders offer a rare insight into organisation at a time of societal upheaval.
A new film from Berghaus traces the story of Adam Raja, who left behind a turbulent upbringing to discover the healing power of climbing.
Activists and campaigners are fighting back against new laws that would seriously undermine the ability to take industrial action, calling it an attack on fundamental workers' rights.
The pro skateboarder withdrew from the 2020 Olympic Games so he could come out as trans. Now, he’s hoping to encourage others to live as their authentic selves – within the sport and beyond.
A new podcast is opening up the conversation between trans women and trans amorous men in the hope of building coalitions.