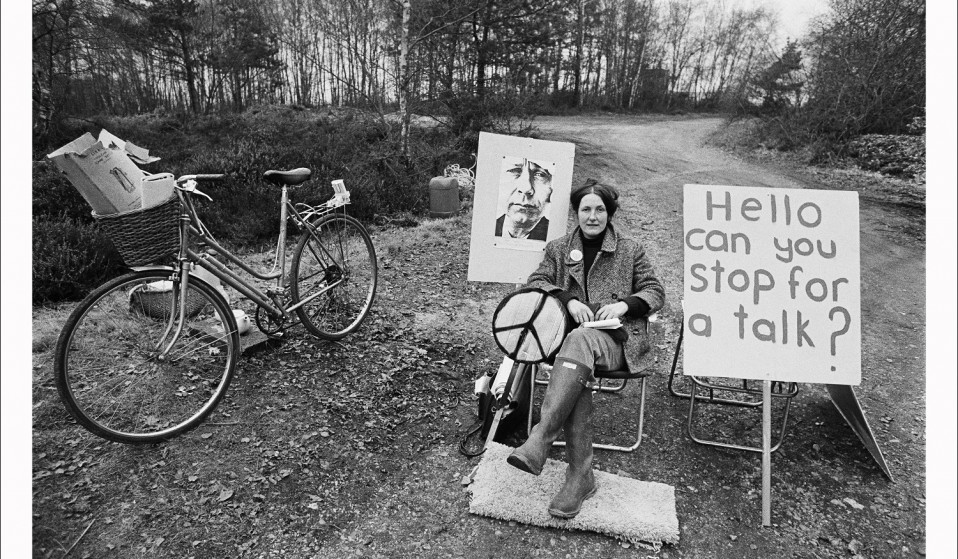 What happens when a photographer combines the dark vibrations of a community in protest with the jovial humour of the protestors themselves? Edward Barber’s exhibition 'Peace Signs' explores the complex connection between warning and celebration in the 1980s anti-nuclear movement.

Shot between 1980 and 1984, the images from Edward Barber’s latest exhibition at the Imperial War Musem in London presents a Cold War generation living in the ever present danger of nuclear destruction. Fully aware of the devastation in Hiroshima, this generation is defined by a pervasive fear of nuclear war. This constant danger is found, surprisingly, in the sense of community of Barber’s photographs. His lens forcing him closer and closer to his subjects, Barber finds intimacy in the face of looming disaster.

Taken at the height of nuclear panic, the photographs have an eerie resonance even now. Barber’s photographs are perhaps not so different to current scenes on our own streets. Emphasising the power of protest, the familiarity of Barber’s collection remind us why peaceful protest remains a crucial part of our lives – in finding community, like-mindedness, and celebration. So get out into the protest and pick up a placard.

Do you remember what equipment you were shooting on back then?
All the pictures were shot on 35mm format – two Nikon FM2s + MD12 motordrives – with 35mm and 28mm lenses. I used Kodak TriX film throughout. I also carried a Nikon FE but this was always for colour transparency film. Up until I started this documentary project I was a primarily interested in environmental portraits and had been shooting formal pictures of people in their homes and work places – so my preference was to use wide angle lenses and work close to the subject – as below. 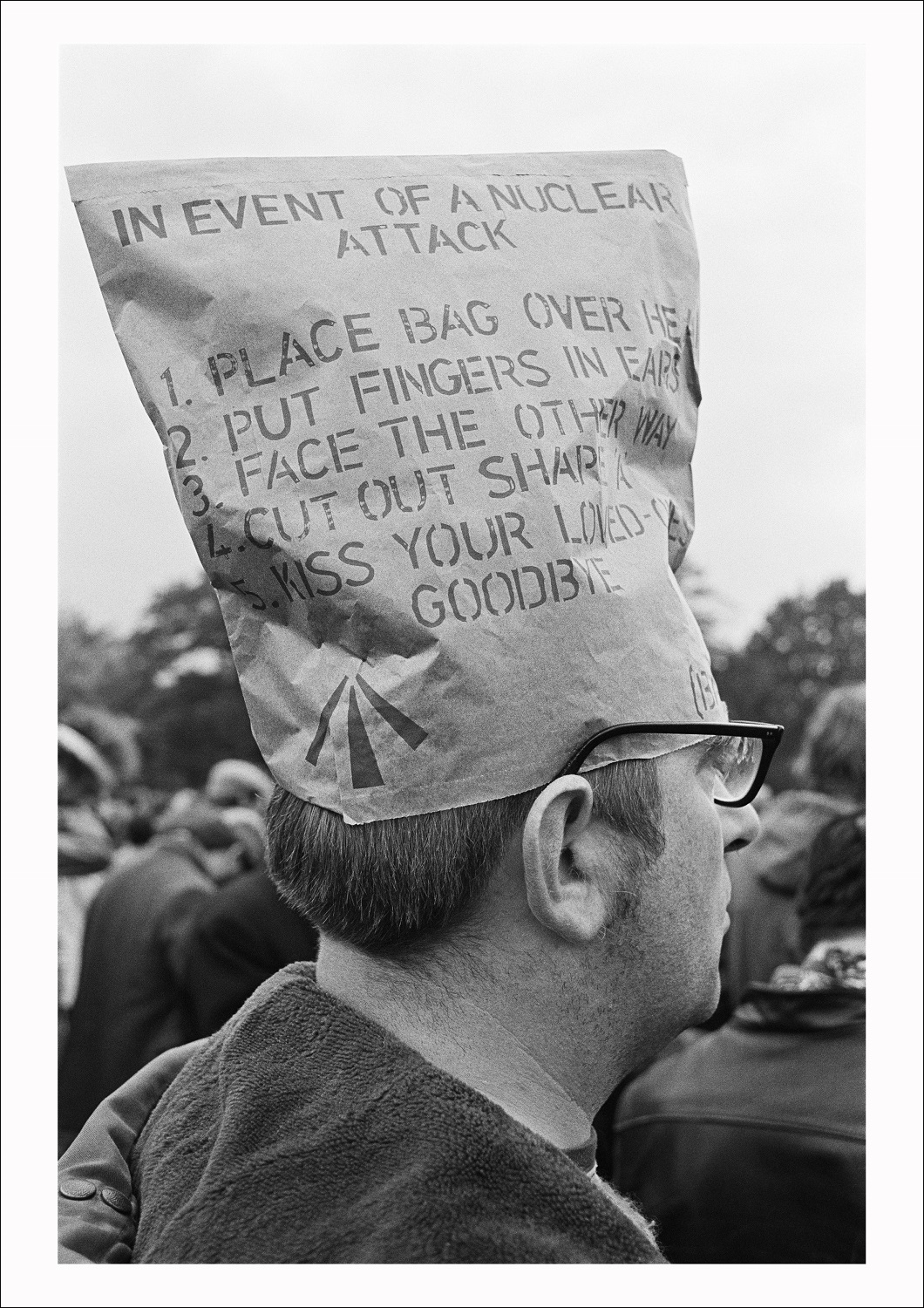 Sometimes I even used a 24mm in tight crowd situations – as below. 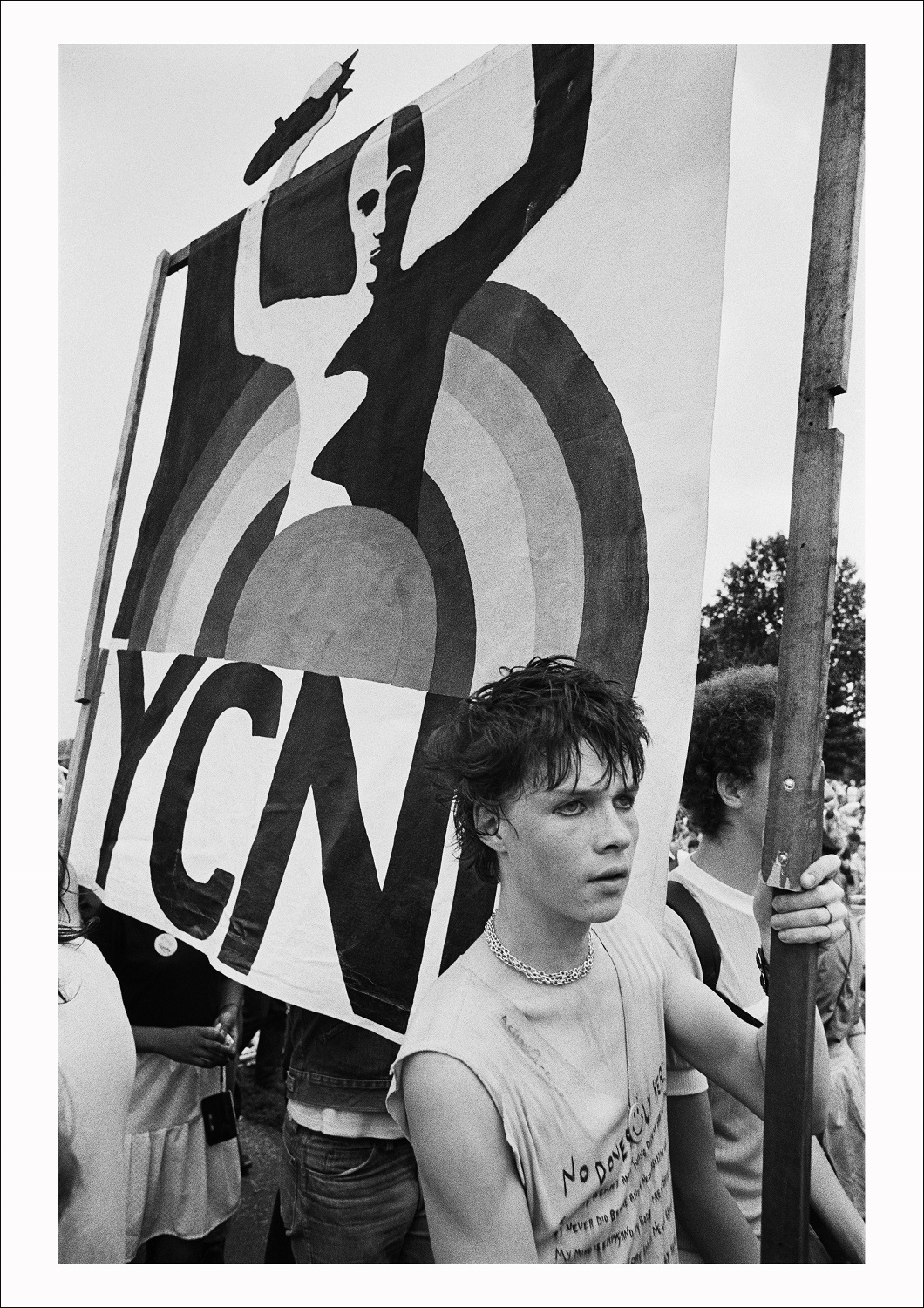 The pictures are really a mixture of formal portraits and reportage/observational images – some of which were widely used at the time in the mainstream press. The arrest picture, for instance, taken in October 1982 at a direct action outside the main gate of RAF/USAF Greenham Common, was used the next morning in The Guardian, later that same year in their annual review of the year in pictures, and also in The Observer Magazine, December 1982. 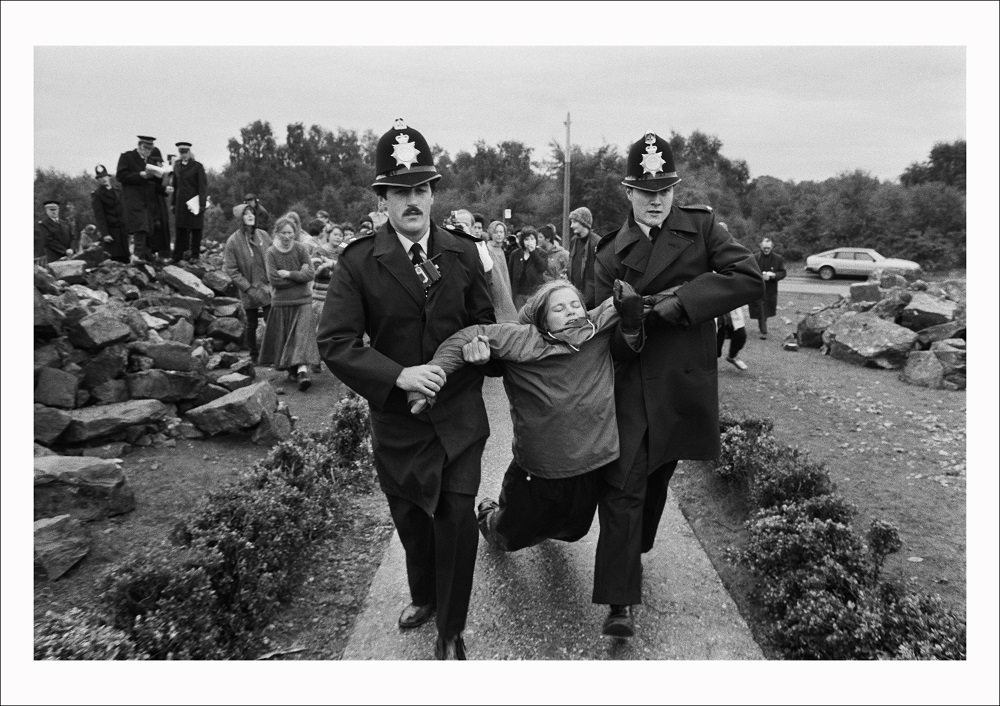 A protestor from the Women’s Peace Camp is arrested for obstructing building work outside the Main
gate at RAF/USAF Greenham Common, Berkshire (1982)

How was the process? Did you have to take time for the activists to trust you, or was it more of a shoot-and-go in the moment?
The shooting process varied enormously depending on the situation – this portrait of the picket on the road leading to the missile silo construction site at RAF/USAF Greenham Common was an absolute gift to me as a portrait photographer. It’s as if the styling and art direction had already been done – the elements of everyday domestic life and camping equipment combine brilliantly with the hand rendered signs and the photocopied portrait of one of the USAF pilots involved in dropping the atomic bomb on Hiroshima. 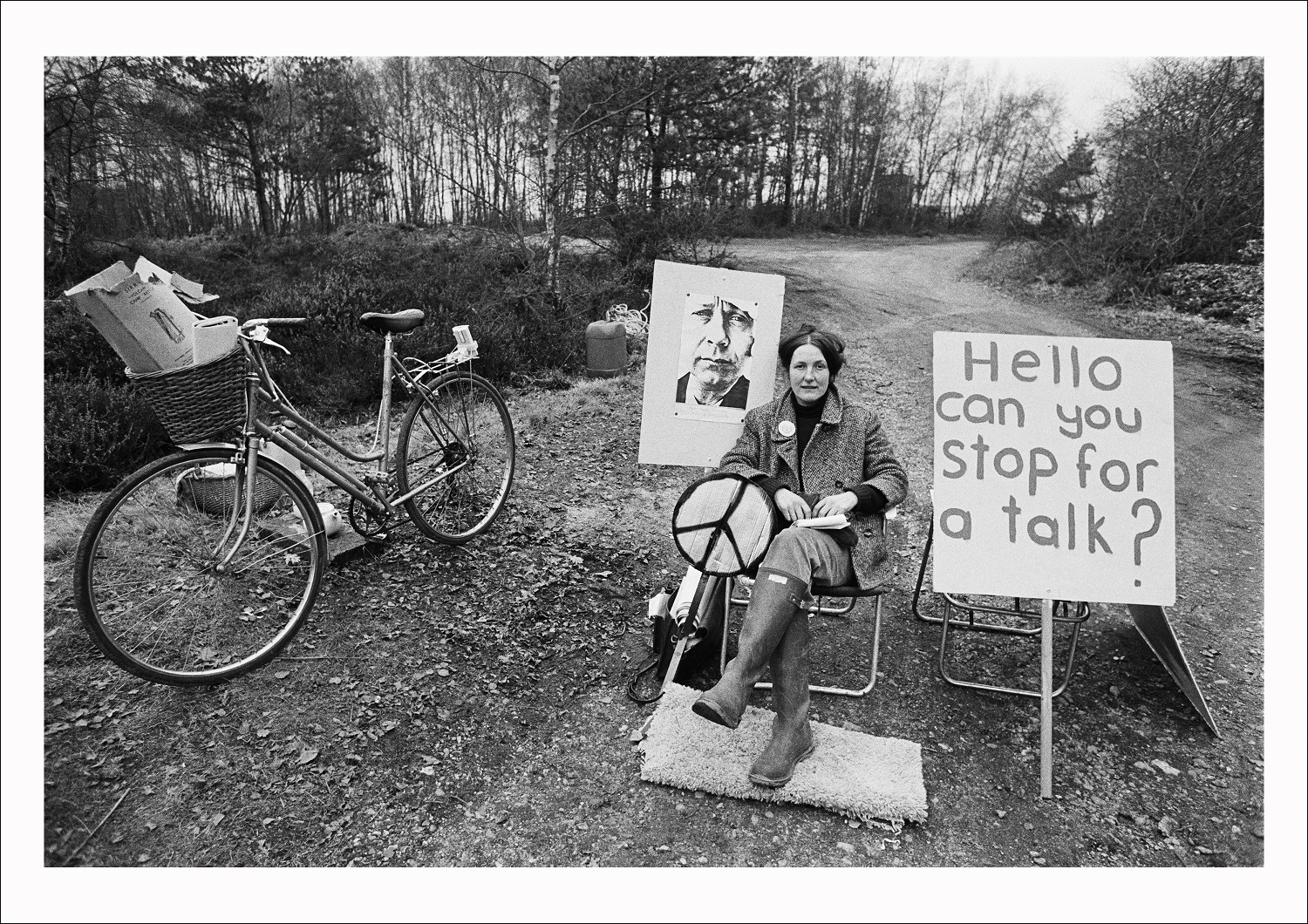 A picket mounted by the Women’s Peace Camp at RAF/USAF Greenham Common, Berkshire (1982)

Some of the protesters were very happy to talk and collaborate in staging photographs, like this portrait of a woman on Westminster Bridge, set up with the symbolic backdrop of Parliament after a group from the Women’s Peace Camp at RAF/USAF Greenham Common had been demonstrating and keening (wailing in grief) in Parliament Square, London, January 1982. 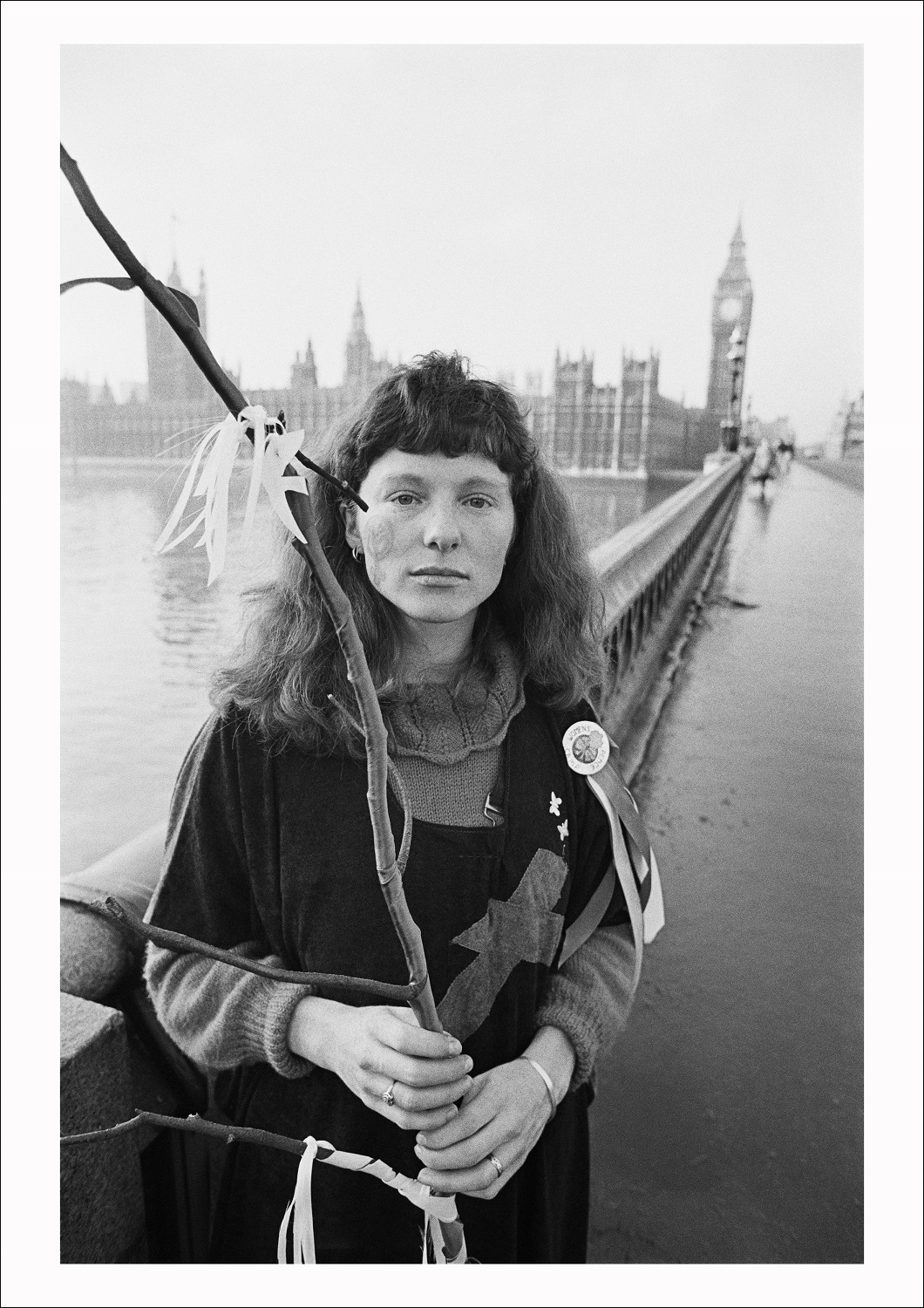 A protester from the Women’s Peace Camp at RAF/USAF Greenham Common after keening in
Parliament Square, Westminster, London, 1982

At many of the non-violent direct actions there was no time or opportunity to engage with the protesters. These artfully staged protests (such as the die-in outside the Stock Exchange, City of London, June 1982 were performance pieces and my role as a documentary photographer was to record the events and make visually arresting images that would promote the anti-nuclear movement. 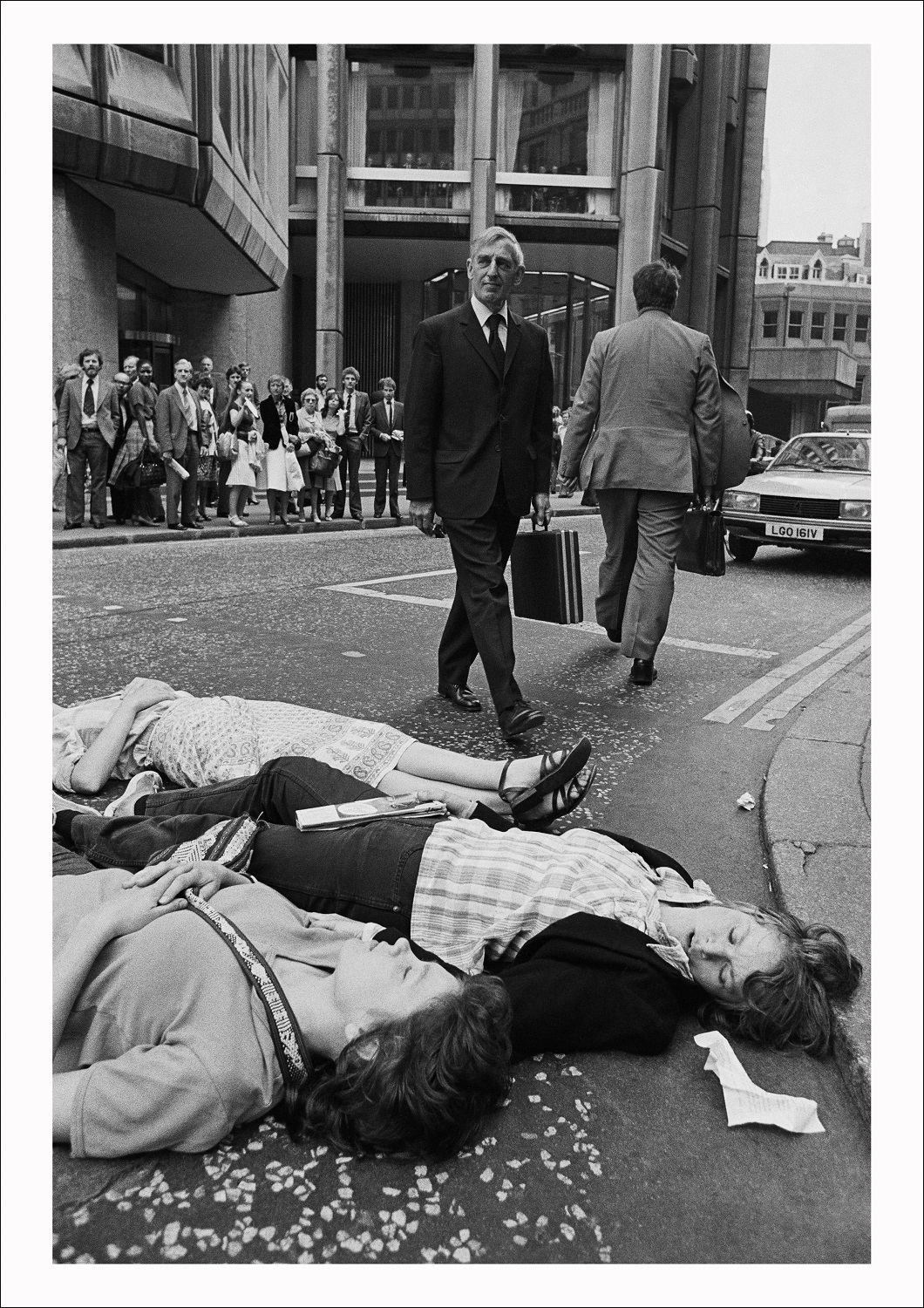 Greenham Common protesters stage a Die-in outside the Stock Exchange during the morning rush hour
as U.S President Reagan arrives in Britain, City of London, 1982

With current anti-nuclear discourse on issues like Trident, how do you think that this series – which was originally captured in the 1980’s – will resonate with an audience of today?
Ordinary members of the public seem to have been effectively put off exercising their right to peaceful protest. I would hope that this new representation of the work will resonate with viewers and that it will act as a reminder and celebration of people power. 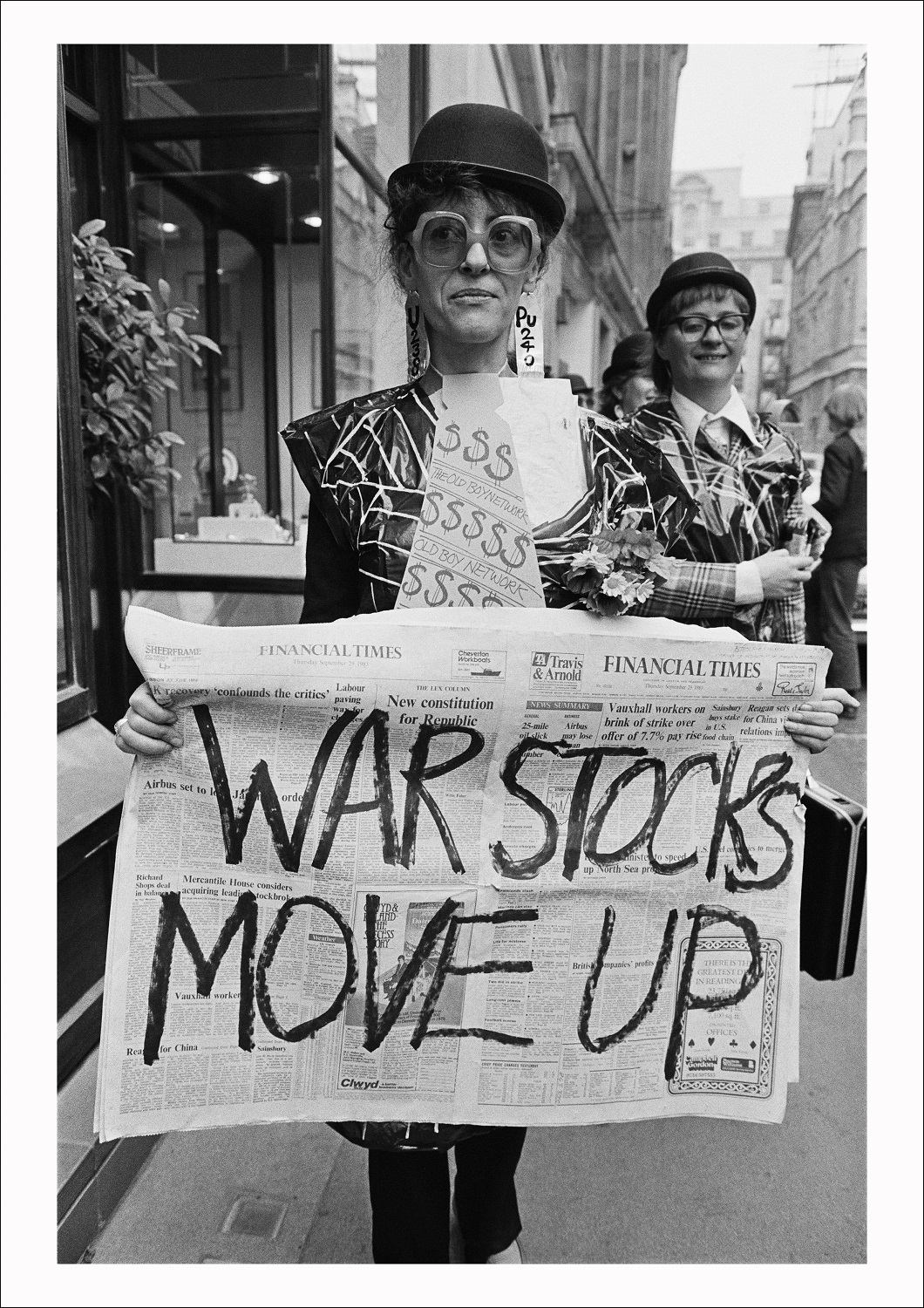 ‘Stop the City’ protester at the Bank of England, City of London, 1983

Is there a certain story which comes to mind when you think back to shooting these images?
When I started this project I had very little experience of shooting pictures on the street so I was always amazed by what happens when different realities collide right in front of you – the results were often extraordinary. Take this police officer for example, ostensibly posing for a portrait, and seemingly unaware that a protester has decided to blockade his police van during a demonstration outside the High Court, London, May 1982. 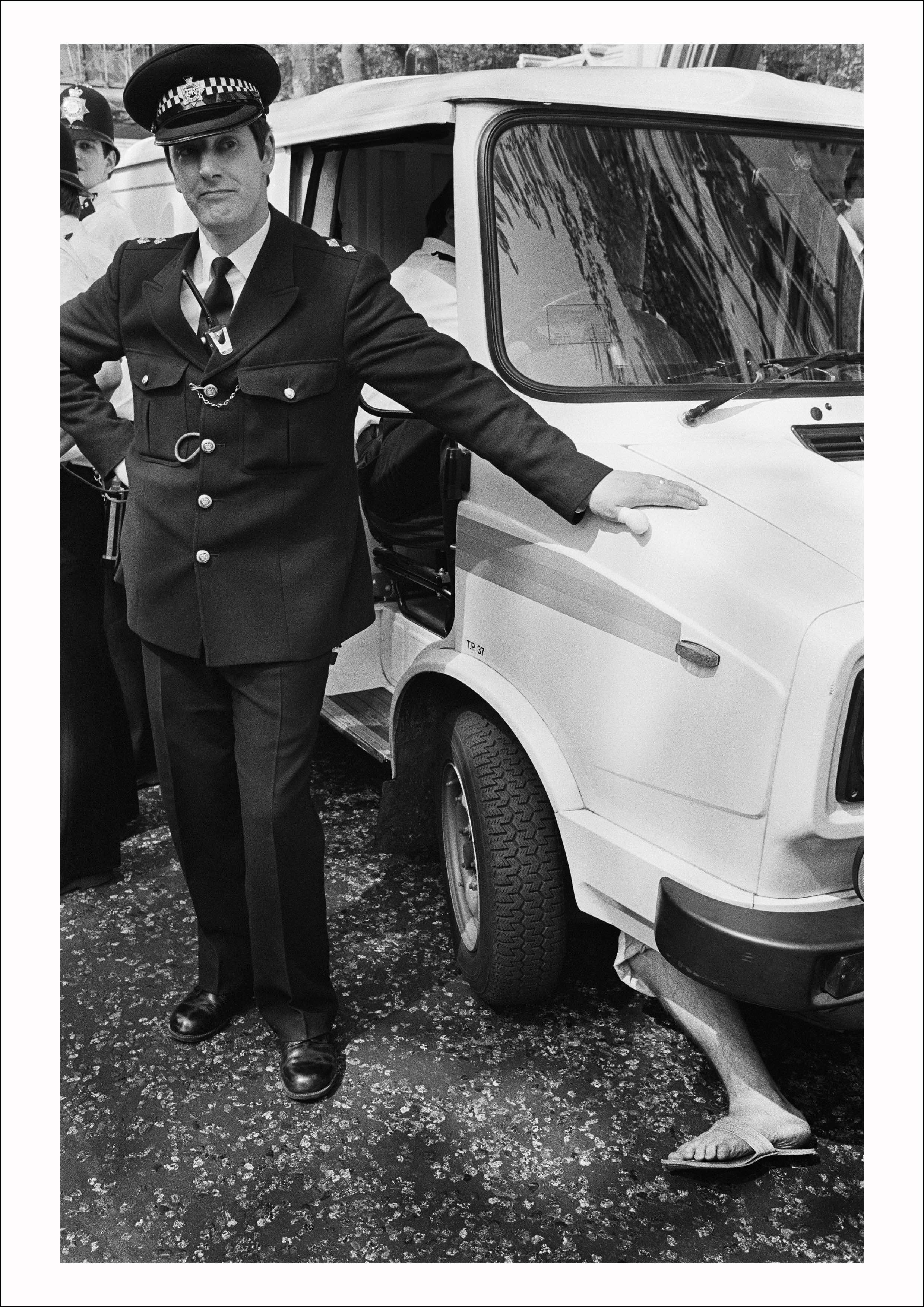 The exhibition claims to offer a ‘fresh interpretation’ of the images. Is there a certain way that wish the series to be perceived today?
Peace Signs is an attempt to offer the images in a form that they have never been seen before. Using the latest technology to scan the negatives and print the pictures we have presented them in a way that disrupts narratives, sequences and chronologies.

Edward Barber’s Peace Signs is at the Imperial War Museum, London, until September 4.

Reddit
RELATED ARTICLES
OTHER ARTICLES
In a new book, KK Ottesen profiles 40 US activists who have dedicated their lives to the fight for human rights.
Belonging, an exhibition by the country’s leading refugee employment charity Breaking Barriers, celebrates the passions and pilgrimages of migrants in the UK.
With a haunting new composition for a feverish new film, the British disruptor is back doing what she does best – smashing boundaries, breaking new ground.
Writer and photographer Peter Brooks braves the heckles with the most enigmatic faction of the Extinction Rebellion uprisings.
This week, protestors have been taking a stand against inequality, corruption and soaring living costs. We join them on the streets as they fight for a fairer future.
In their emboldening new book Trans Power, the LGBTQ activist makes an urgent call for change, while offering a new perspective on ‘trans‘ identity.