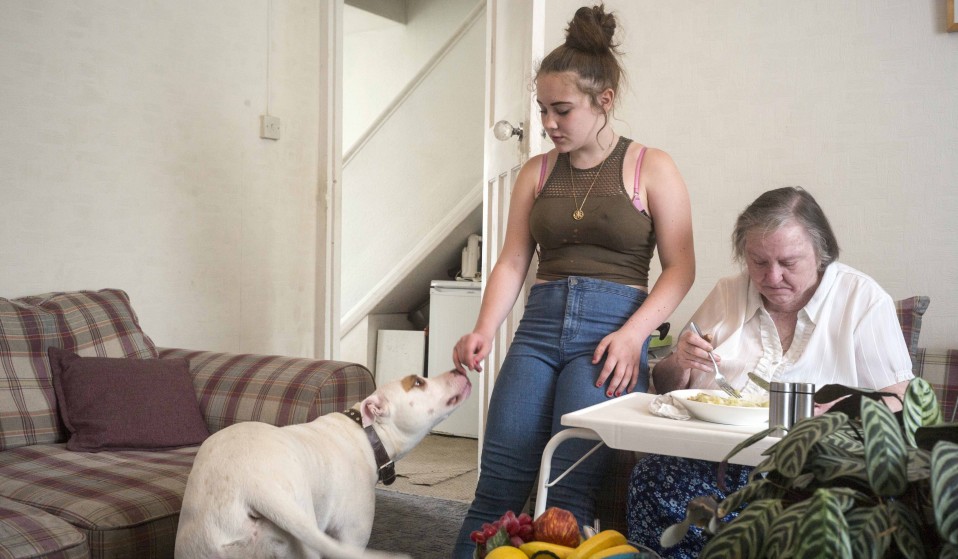 Photographer and writer Stuart Freedman has spent half a lifetime documenting the classic subjects of photo-reportage. Famine, conflict and subcultures have all been evoked through Stuart’s incisive lens, his work ranging from Sub Saharan Africa to the Middle East, the Indian Subcontinent to the Balkans and beyond.

Recently he unveiled a new body of work on a subject close to home for the born and bred East Londoner: the Englishman and the eel. The book, available for preorder now, is a beautiful and timely take on a disappearing aspect of English identity.

“I grew up in East London in the 1970s, which was then a byword for poverty and now a metaphor for gentrification,” he explains. “The streets then were navigated by pubs, cheap cafes and eel pie and mash shops. Often they were elaborately decorated with ornate Victorian tiling and many sold live eels in metal trays that faced the street to the fascination, and sometimes horror, of passersby.” 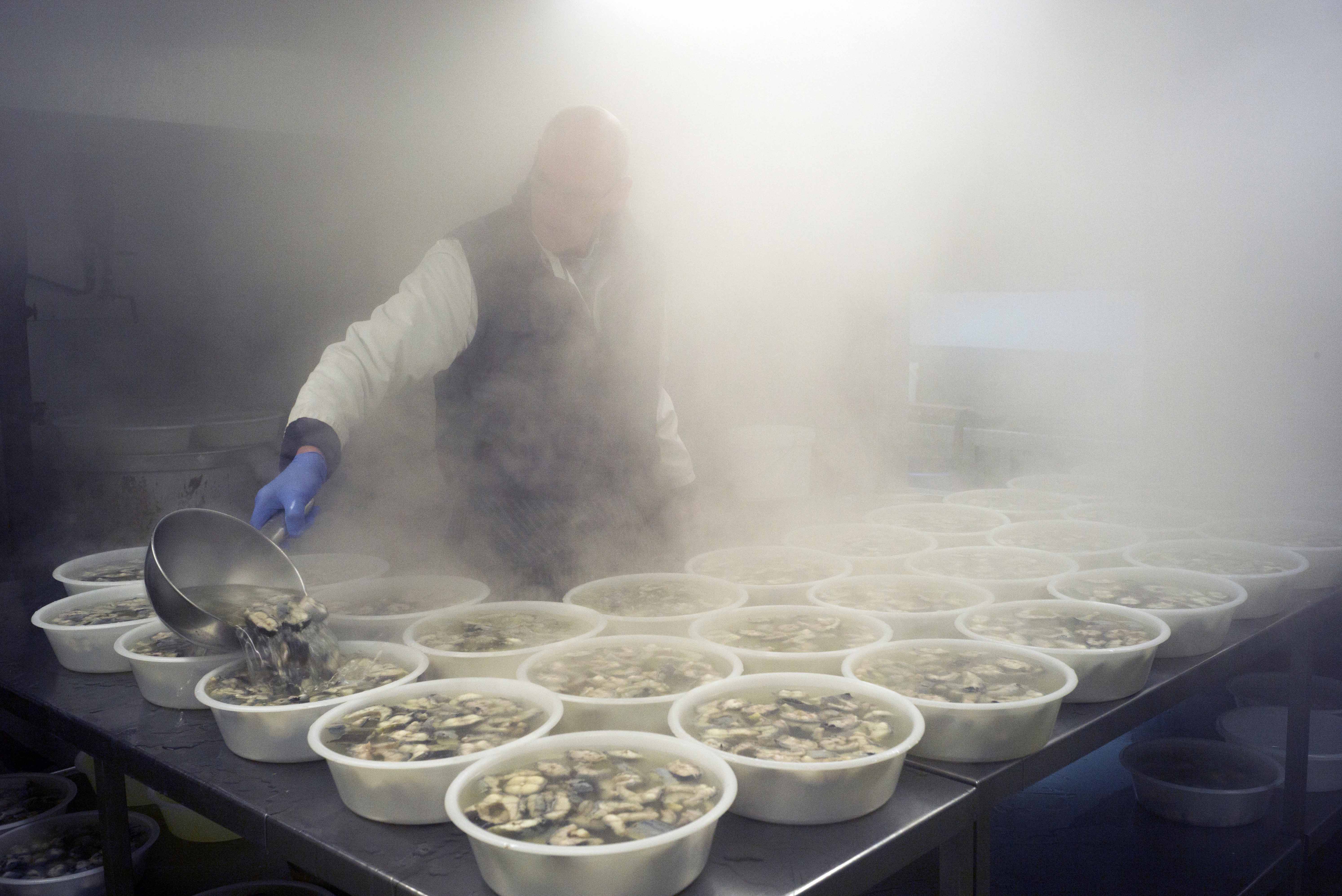 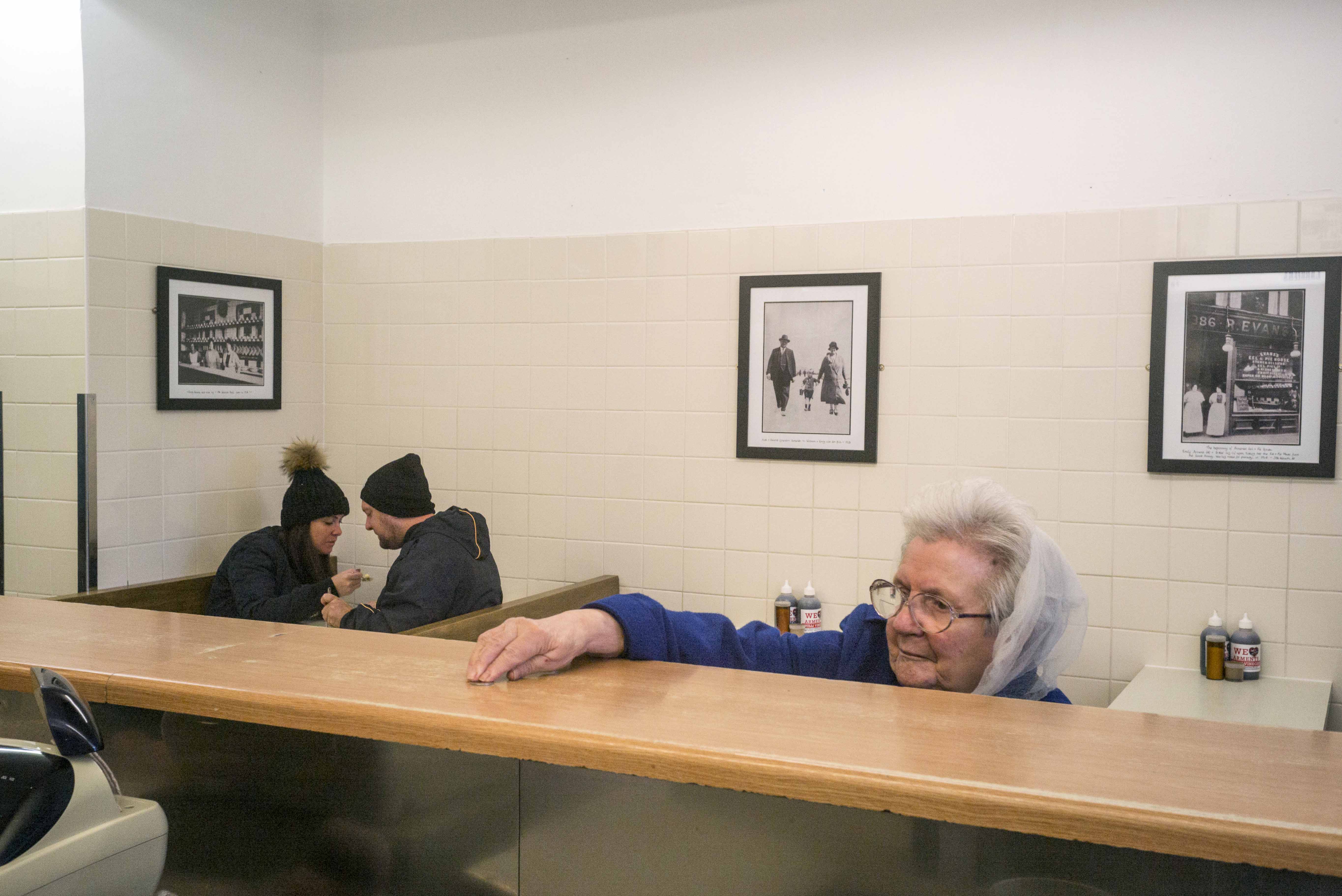 A customer orders her pie and eels

The definition of a hard-nosed photojournalist, Stuart is no sentimentalist. The book evokes nevertheless an image of an East London that few first time visitors would recognise today. ”Inside there was warm comfort food. Steam. Tea. Laughter. Families. Already in decline by the mid-century, the shops were still dominated by a handful of families and passed down through generations,” he says.

The few remaining eel shops deep in the heart of the London’s East end are havens for what the East End once was, repositories of memory for people like Stuart, who grew up with a raft of certainties and aesthetics that have all but vanished in this part of the world.

“These places are a portal back to my own past and a way of examining the change that has taken place to the culture that I left,” he says. 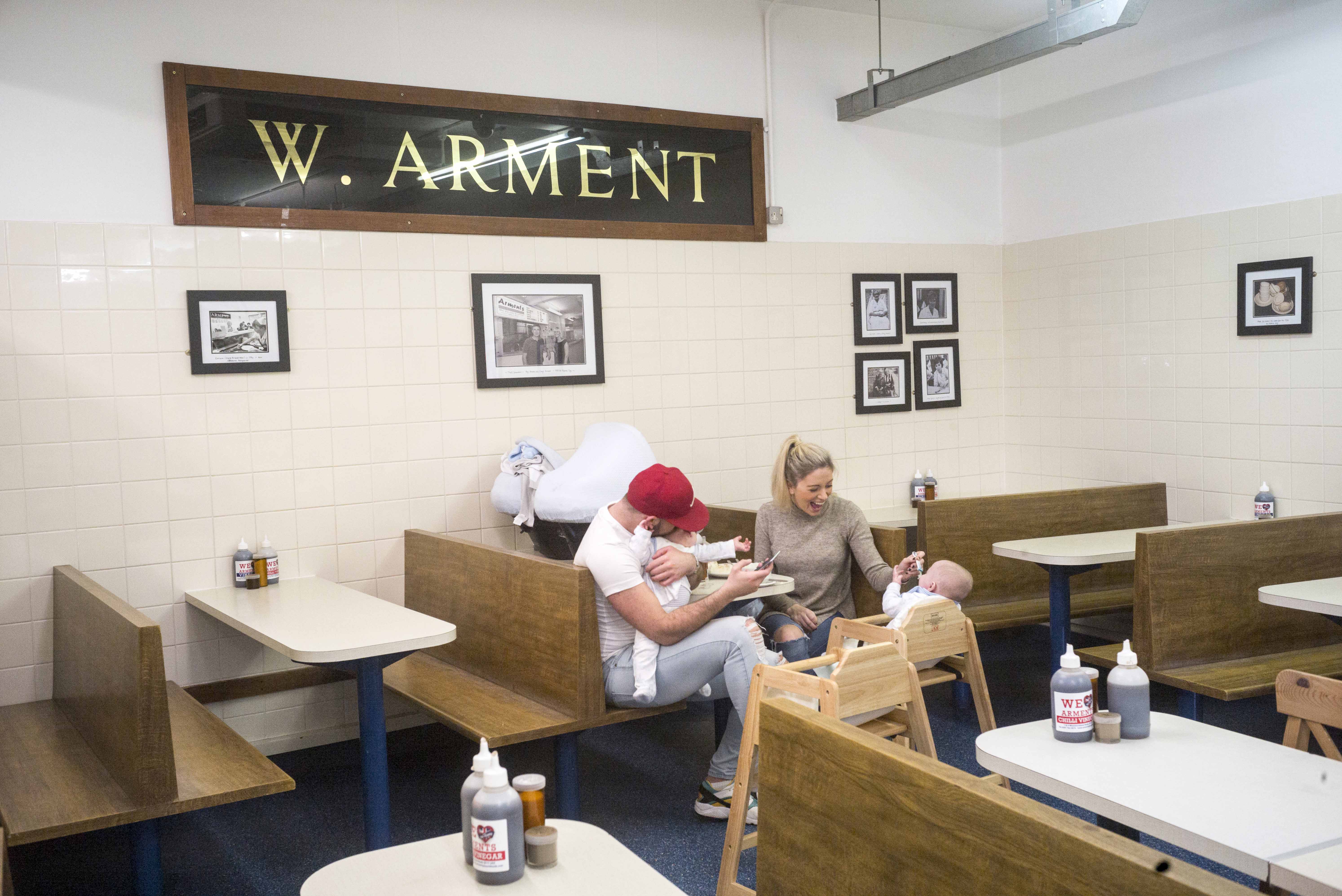 A family at Arments Pie and Mash shop 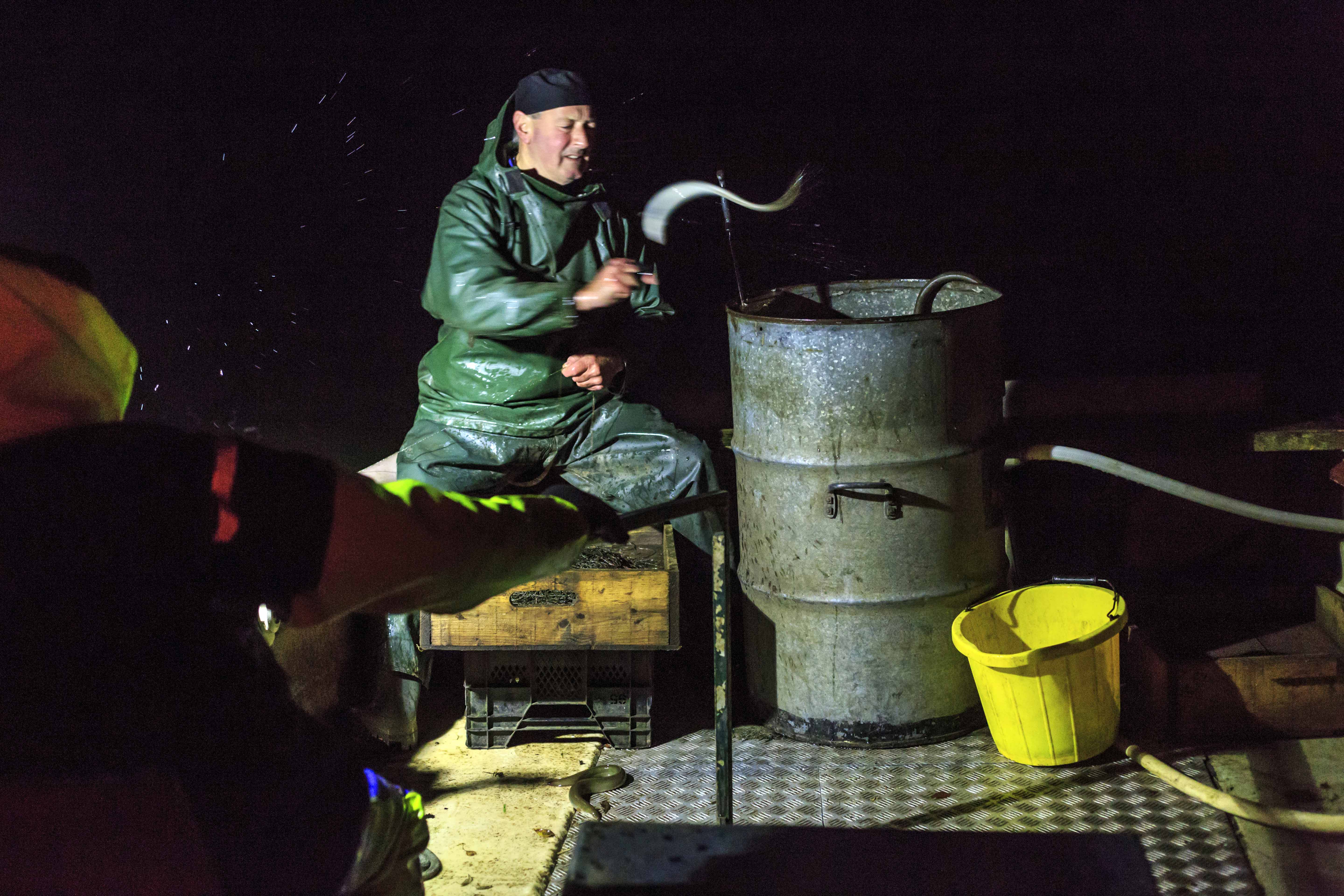 Dick and David McIlroy Fish For Eels On Lough Neagh

But the work reaches far beyond any kind of cockney caricature and any latent sense of  nationalist anachronism. It transcends the English capital’s Eastern environs to look at the relationship of the eel itself to generations of the working classes.

“In the course of making the work I’ve travelled to Lough Neagh in Northern Ireland to photograph eel fishing. I’ve made work at both Barney’s and Mick’s Eels, the two companies left that process the fish. I’ve photographed and written about Millwall fans (who chant about the the eel on the terraces) and recorded those that now eat their pies and eels at home, too elderly and frail to journey to the shops.” 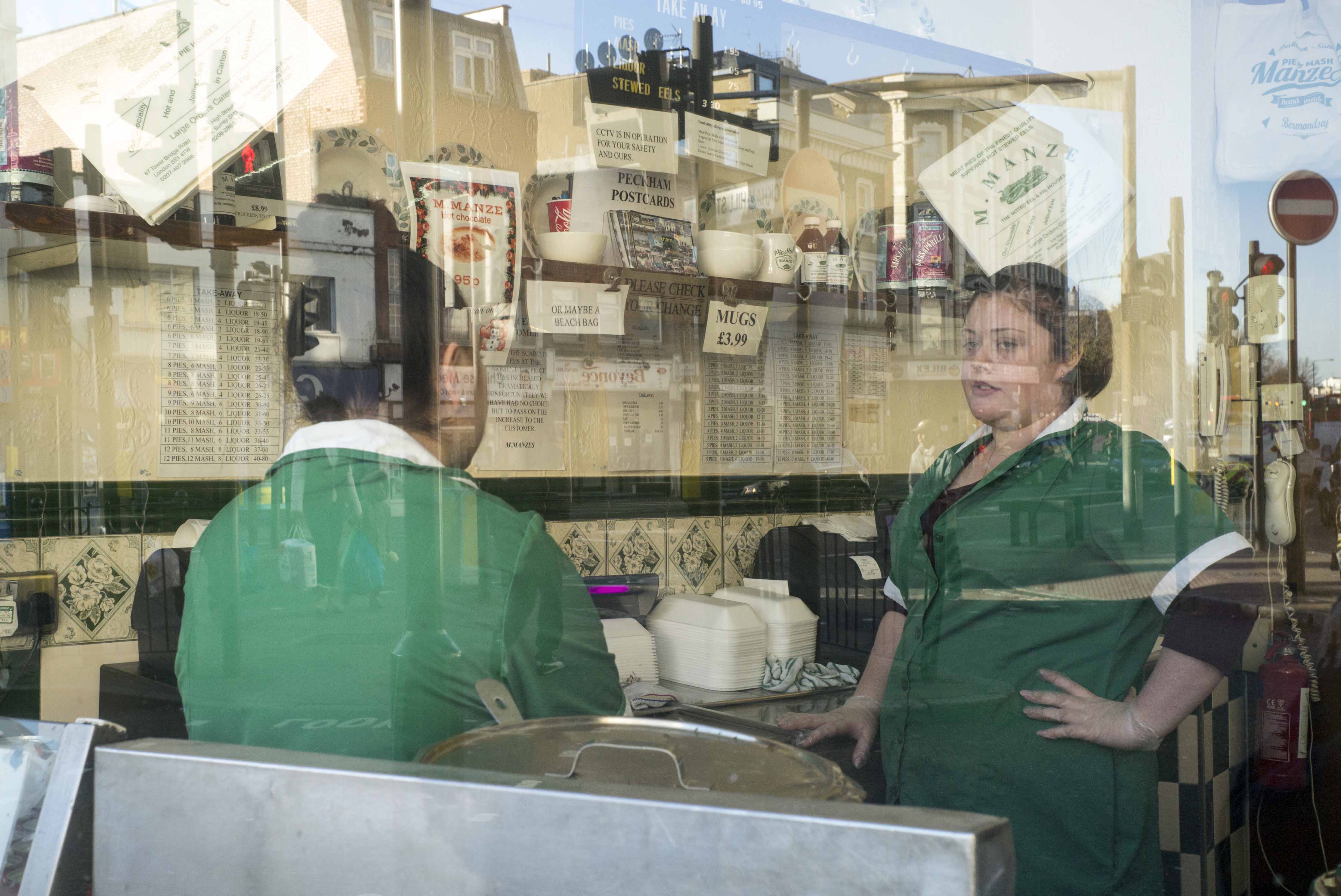 Waiting for closing at Manze’s Pie and Mash shop

Embedded deep at the heart of the work is an incisive take on the ever-shifting sands of culture – and a comment on how constancy and evolution are involved in a dynamic – the surface appearances of which can fascinate and surprise. “Now, the spiritual home of the eel, pie and mash shop is out in Essex, he says. “People who have made Essex their home often identify re-imagined and distilled working-class culture that is geographically separate from their traditional roots.”

Linkedin
RELATED ARTICLES
OTHER ARTICLES
Students are being left to languish in unsafe housing, in some cases leading to serious health complications.
Last week, Tower Hamlets council removed its nudity-restricting licensing conditions in a huge win for London’s kink community.
A sharp increase in officers armed with the electrical weapon is resulting in serious injuries and deaths.
The author discusses her new memoir, which offers a sobering reflection on the racism and otherness she’s experienced along with a joyful celebration of her culinary heritage.
With the virus now a global health emergency, we must take steps to fight misinformation and demand a swift UK-wide vaccine roll out, writes Phil Samba.
Ahead of the release of his new album, the producer reflects on his battle with drug use, getting into painting and what Madonna taught him.