Art & Culture / Photography / Events that changed the course of history, in photos 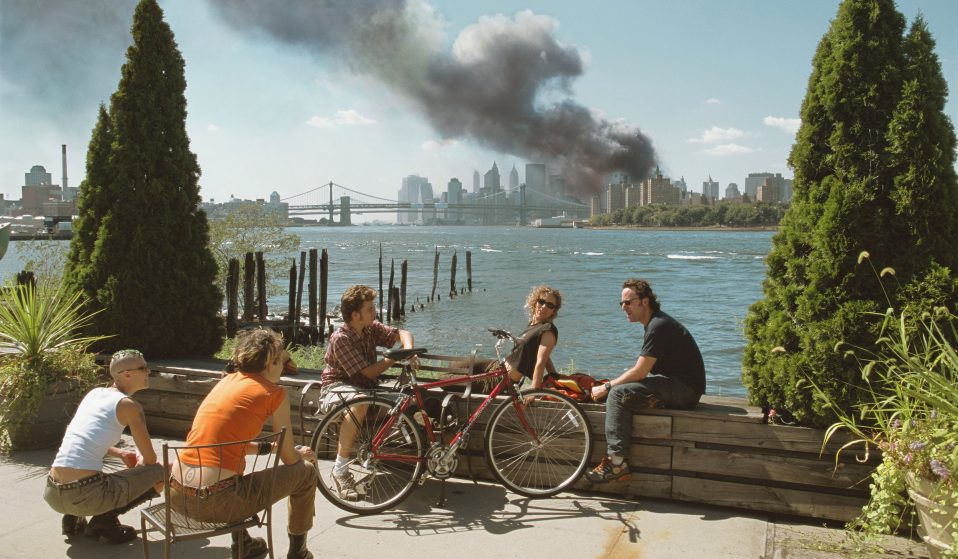 What do real turning points look like? For the latest Magnum Print Sale, the world’s best photographers pick out the most powerful images from their archive.

What do real turning points look like? For the latest Magnum Print Sale, the world’s best photographers pick out the most powerful images from their archive.

Great documentary photography will capture turning points: moments that change the course of history on a global, national, or even personal level.

It is these kinds of images that are being celebrated in Magnum Photos’ latest Square Print Sale. The online event, titled Turning Points, asks photographers to choose one photo from their personal archive that changed the course of history, society, a life, or a practice.

The sale is a collaboration with The Everyday Project, and contains over 100 images by international visual artists. All prints will be available to buy for a specially discounted price from the official Magnum website, from today until April 12.

“Turning Points is the ideal theme for our first collaboration with Magnum Photos,” explain Austin Merrill and Peter DiCampo, the co-founders of The Everyday Project. “[We want to] use photography to encourage people to change the way they think about the world. The Square Print Sale is an opportunity for our photographers to showcase that effort, bringing stories they care about to a new and wide audience.”

See a selection of the images, with quotes from the photographers, below. 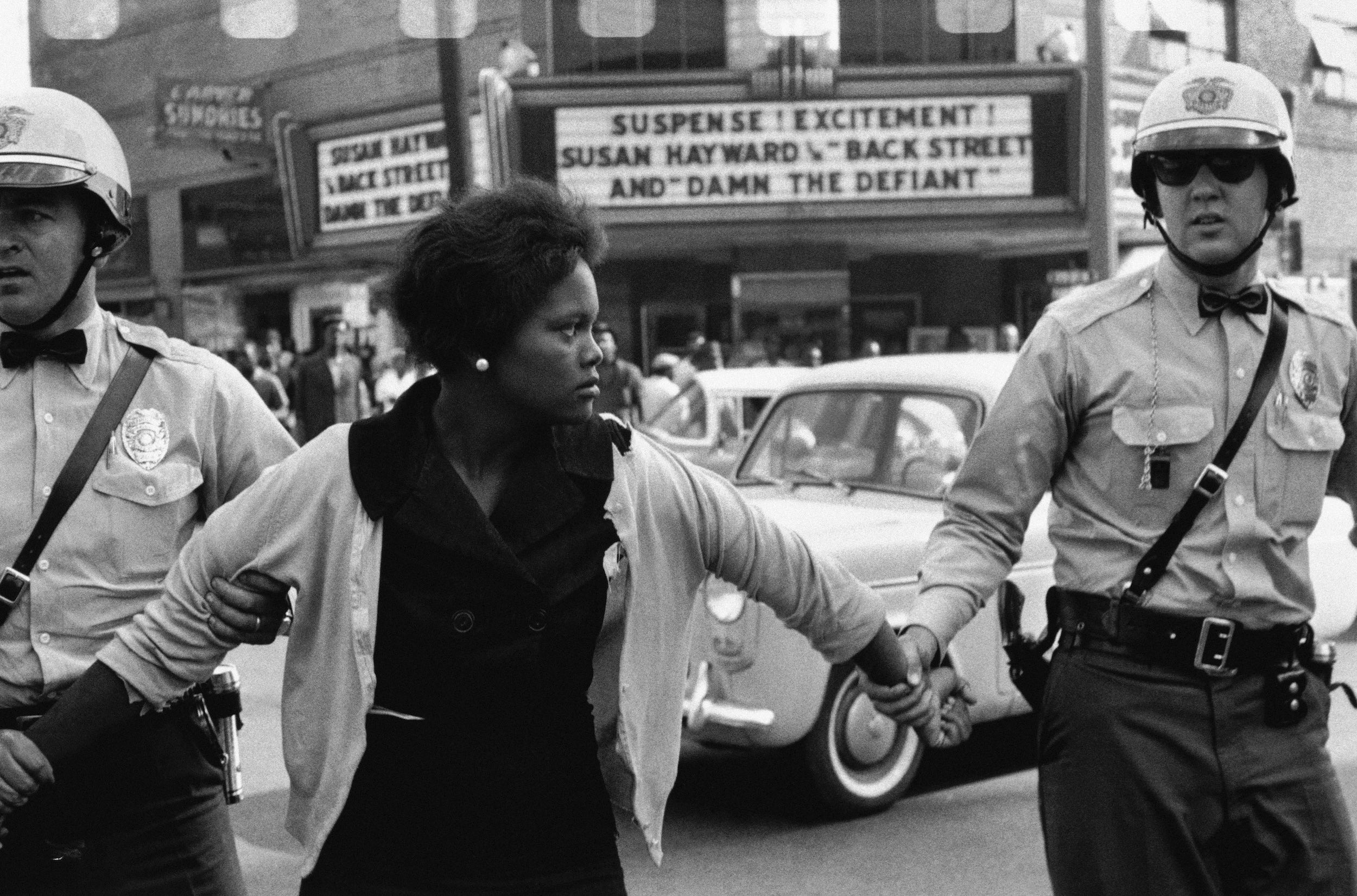 “Birmingham was heating up and I made two trips there, a week apart, to photograph the protesters assembling in several parts of the city. Mass confrontation, civil disobedience, and open defiance had not been seen before in the city which had been called the most segregated in America. During the demonstrations, helmeted police made arrests on the streets and the firemen used high-pressure hoses to disperse groups peacefully protesting in Kelly Ingram Park. There was tension and violence. As this young woman was being grabbed by the police, I noticed an expression of defiance on her face. For me, this woman became a true hero of the movement.” 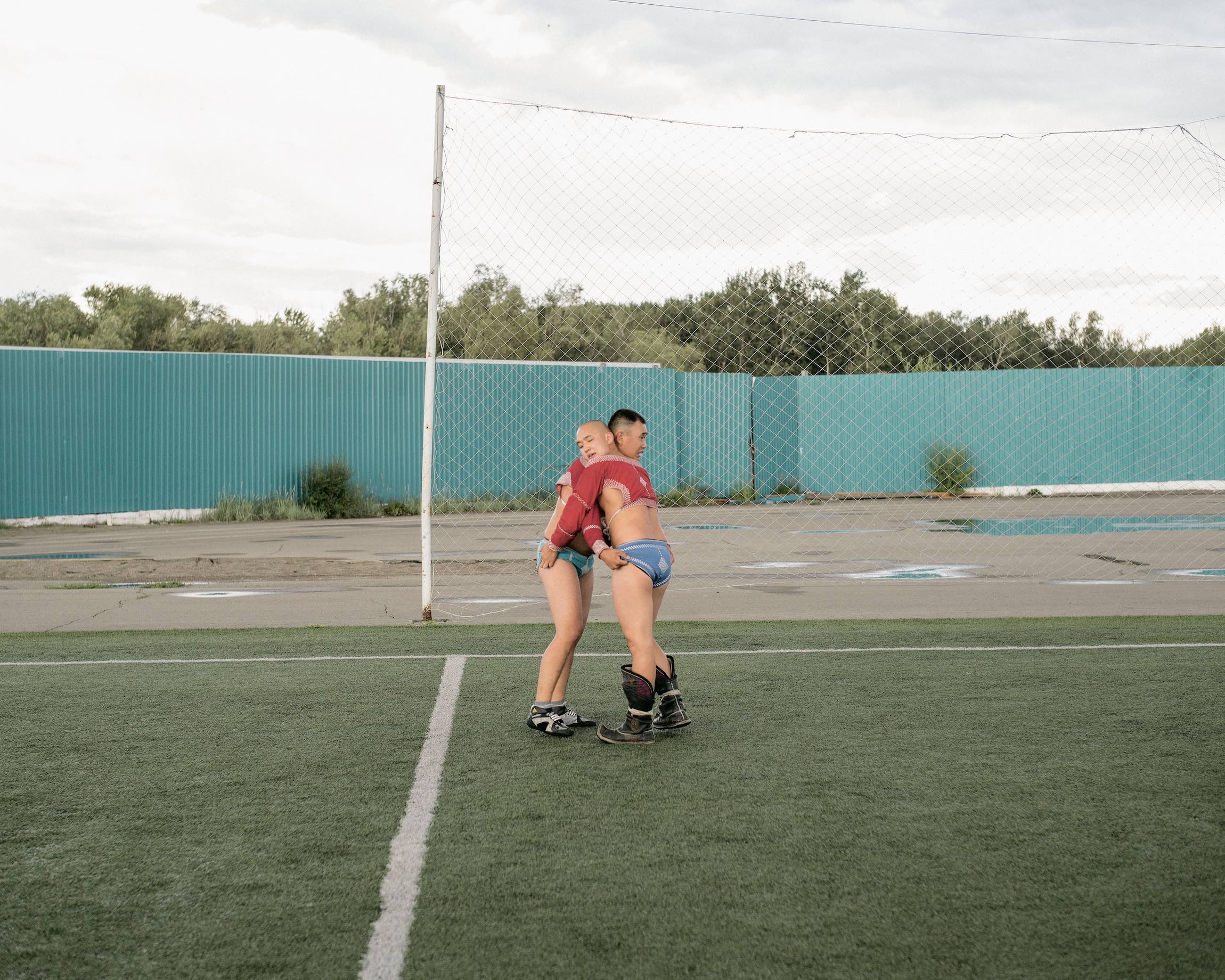 “For less than a second two athletes stand close to one another. Their eyes are closed, their heads lean on each other’s shoulders as if they are embracing each other peacefully. I tried to capture this scene in the moment before the fight with all its tearing and throwing each other back and forth started.

This photograph shows two figures training in khuresh, a type of wrestling and the national sport of the Tuva Republic, a partially recognized state in southern Siberia. The people of Tuva create sagas and legends about their favorite athletes, ascribing supernatural qualities to them.” 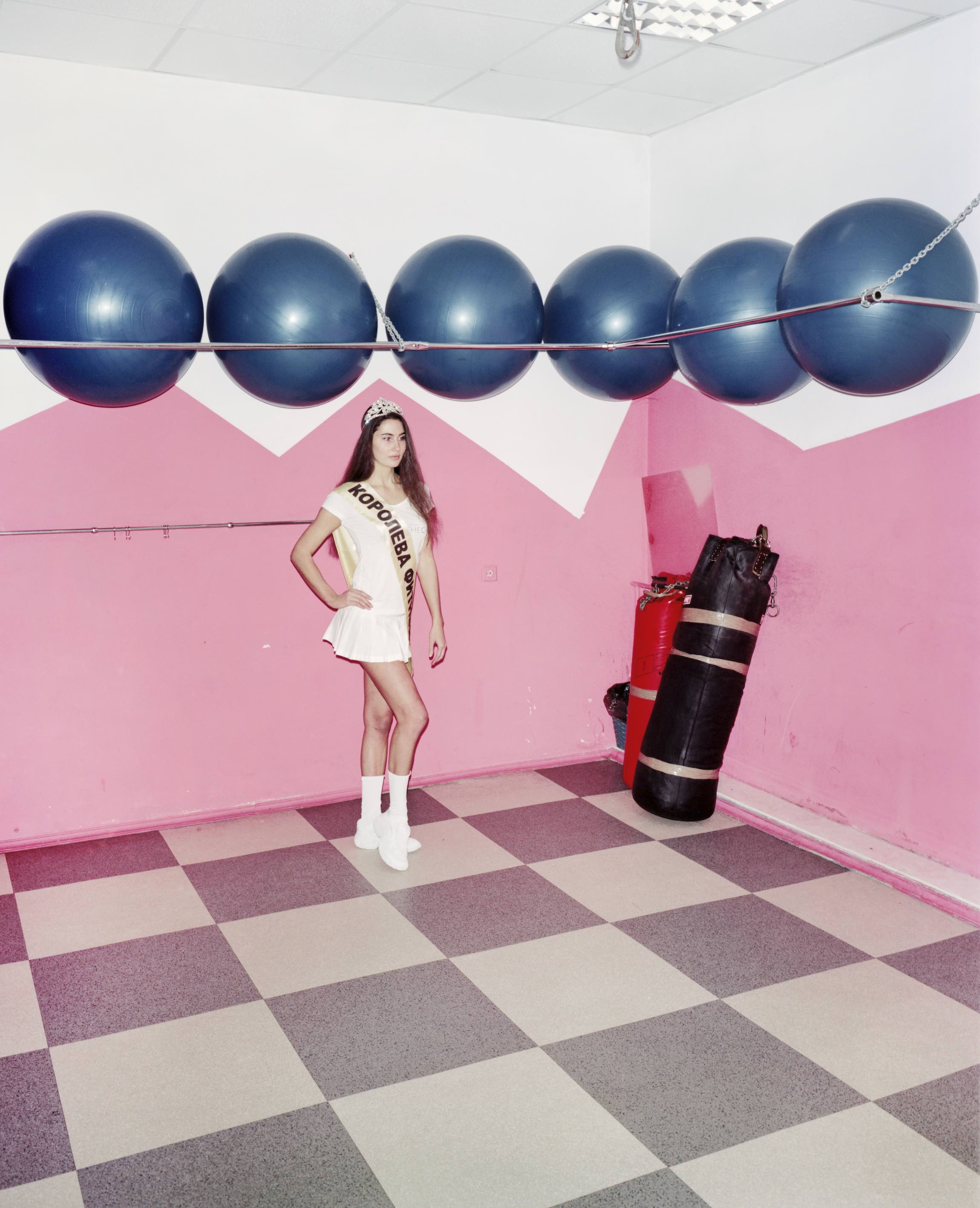 “The Winners project was one of the most critical points in my understanding of photography and its interference with society. Tracing the ideal social structure promoted by Belarussian authorities was the first step in moving my attention from intimate spaces to the public sphere. This project initiated my long-term interest in mechanisms of control, manipulation and propaganda.” 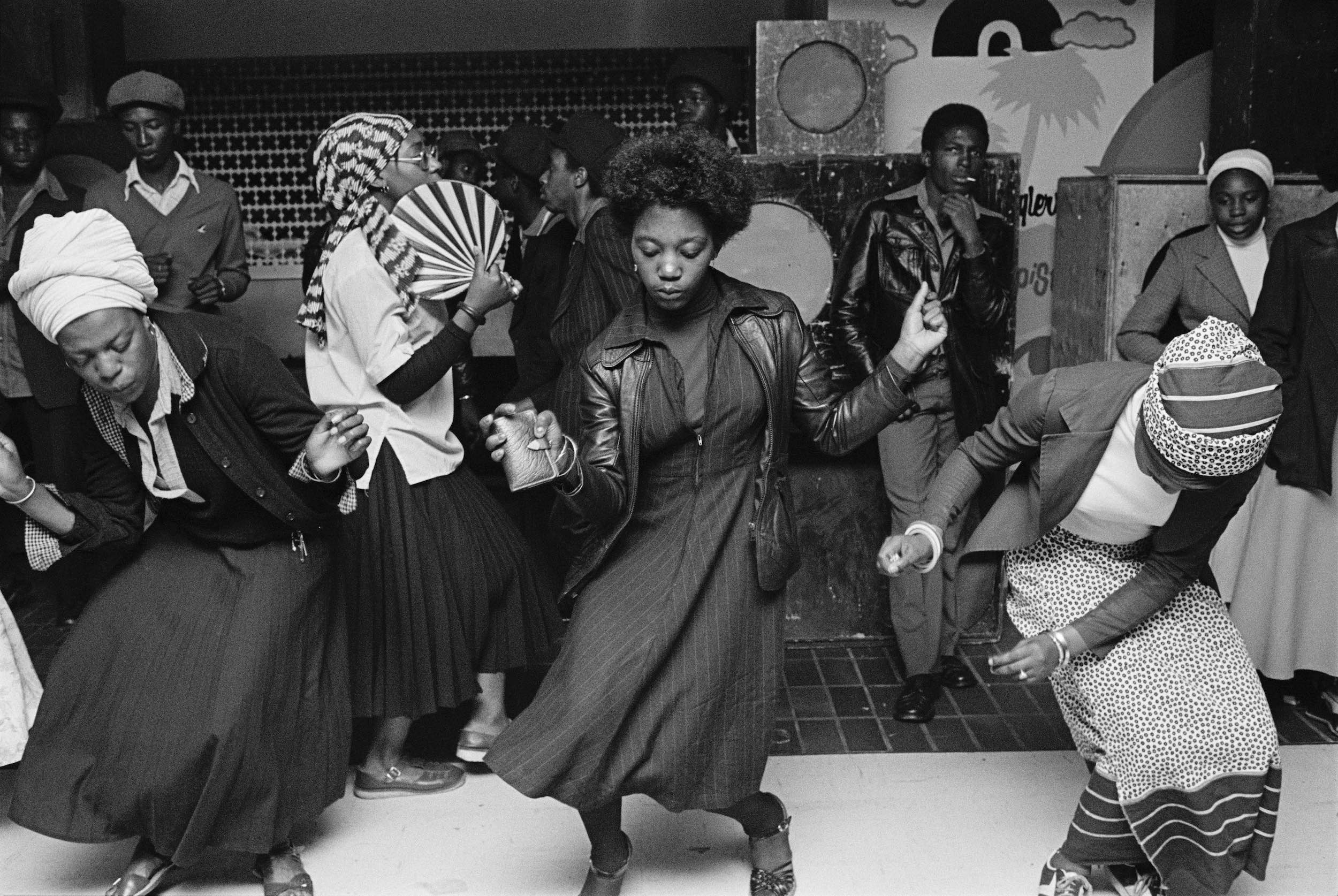 “This photograph is a turning point for me in that for years after it was taken, the photograph was not much used or purchased, but gradually, over the last few years, it has emerged as one of my most popular images.” 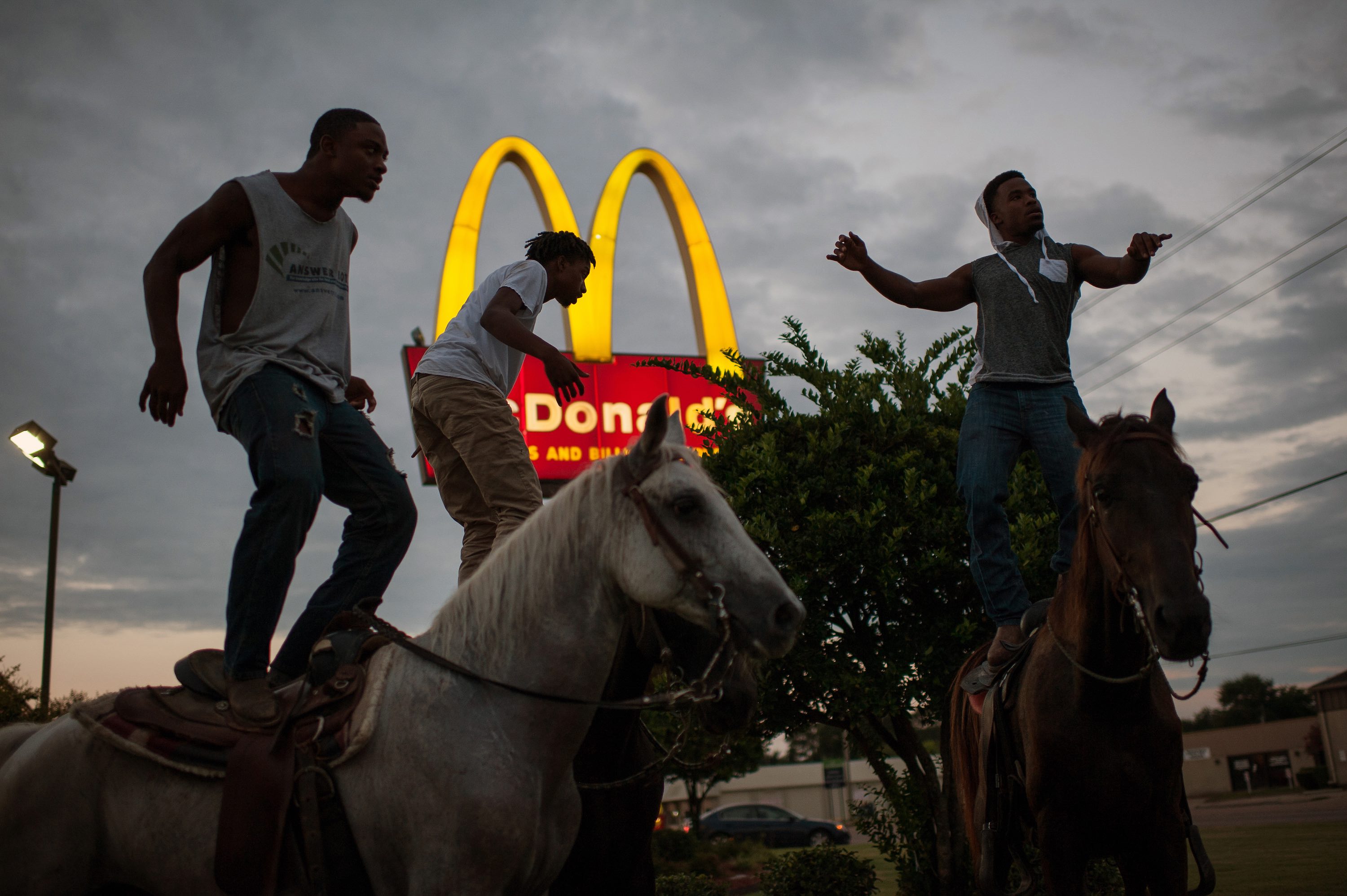 Tyrese Evans (left to right), Jeremy Melvin, and Gee McGee dance atop their horses in the McDonald’s parking lot in Cleveland, Mississippi on Aug. 9, 2017.

“This image is part of my ongoing project documenting the subculture of African American cowboys and cowgirls in the rural Mississippi Delta. Just after the Civil War, one in four cowboys was African American, yet this population was drastically underrepresented in popular accounts. And it is still. But the ‘cowboy’ identity retains a strong presence in many contemporary black communities.

The story is timely with the current political environment, and it’s one that provides a renewed focus on rural America. With the hit release of ‘Old Town Road’ by Lil Nas X, the topic of black cowboy history has become a mainstream topic of discussion. The project is a counter-narrative to the often negative portrayal of African Americans. Instead, I have captured a community showing love for their horses and fellow riders, while also passing down traditions and historical perspectives from one generation to the next. Ultimately, the project aims to press against old archetypes – who could and could not be a cowboy, and what it means to be black in Mississippi – while uplifting the subjects’ voices.” 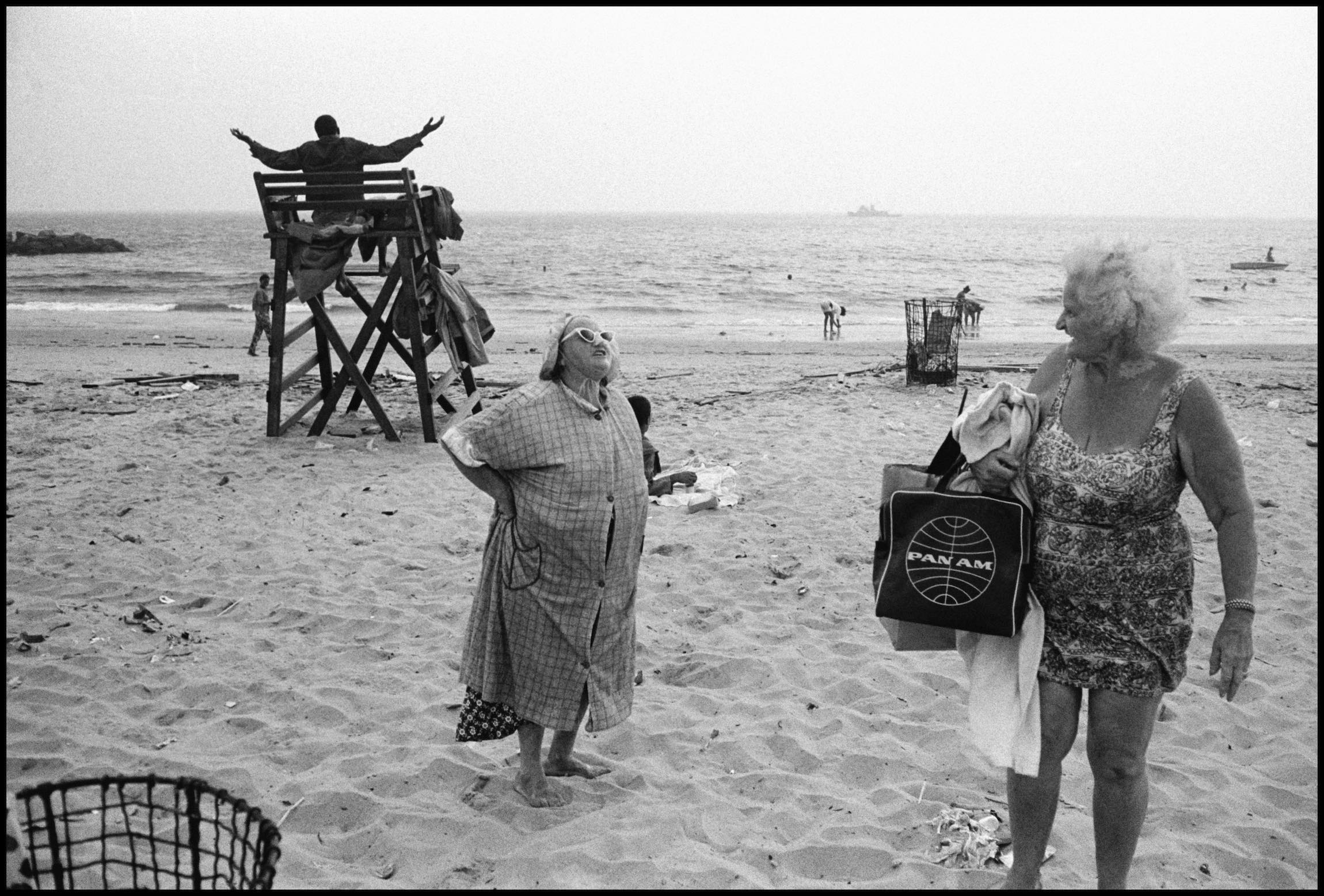 “It was 1969. I had picked up my first camera (a Miranda) two years before. That year I had started shooting my first long-term personal essay on Coney Island. I had been looking at as many photos as I could to see what interested me visually and what direction I should go with my photography. This was the first photo I had taken that I thought at the time had artistic credibility. I was so happy to have achieved something that I felt I could be proud of. Even if all my photos are untitled, I affectionately call this image ‘Fellini’.” 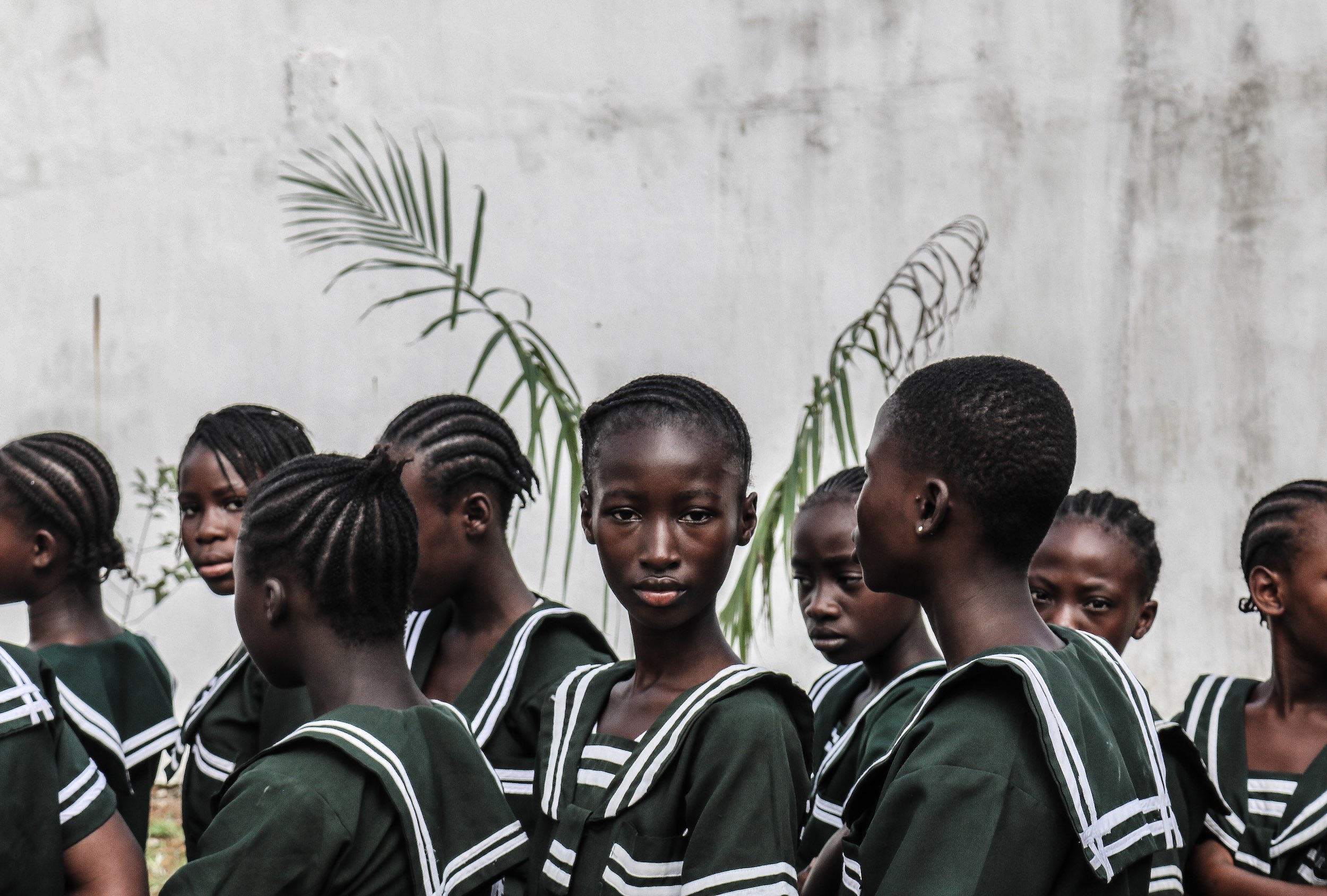 A child’s direct stare during the parade for International Day of the Girl Child in Monrovia, Liberia.

“Realising the power of photography: it speaks multiple languages and so can spur a range of emotions. Knowing that it is art, and can be and has been a weapon. And like all things powerful, with the ability to do good and bad comes responsibility. It’s a dangerous and beautiful tool, depending on who is holding it.” 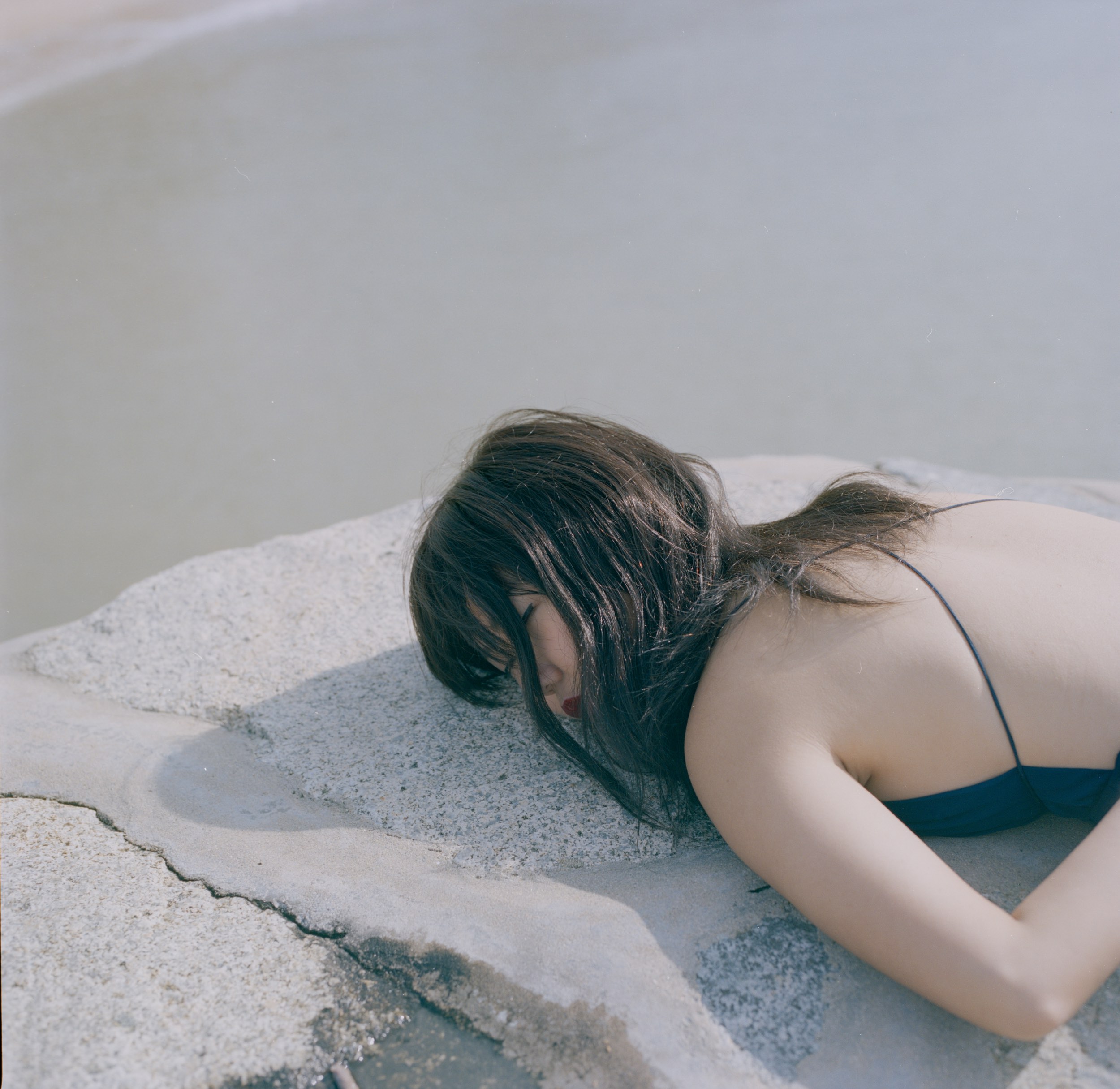 “Pause, trust yourself.” See Ting, in the wig she sometimes wears, rests on a rock perched at East Coast beach, Singapore.

“This image is from my photo series All is not lost, which revolves around a young Singaporean woman’s journey with alopecia areata, an autoimmune disease that affects the growth of hair follicles. Though not deadly, there is no cure to the disease, and it is known to affect one’s confidence drastically. The project is inspired by See Ting’s questioning of what constitutes femininity and beauty. I started by documenting her daily life, but eventually felt that I was not reflecting deeply enough on her experience or psyche.

Stepping away from the usual reportage style, I worked to photograph places and spaces that strongly represented her dreams, anguish, and hope while she navigates her on-going journey of hair loss. The project is not meant to incite pity, but to uplift others, gently reminding them they aren’t alone. It is a story of hope and resilience.” 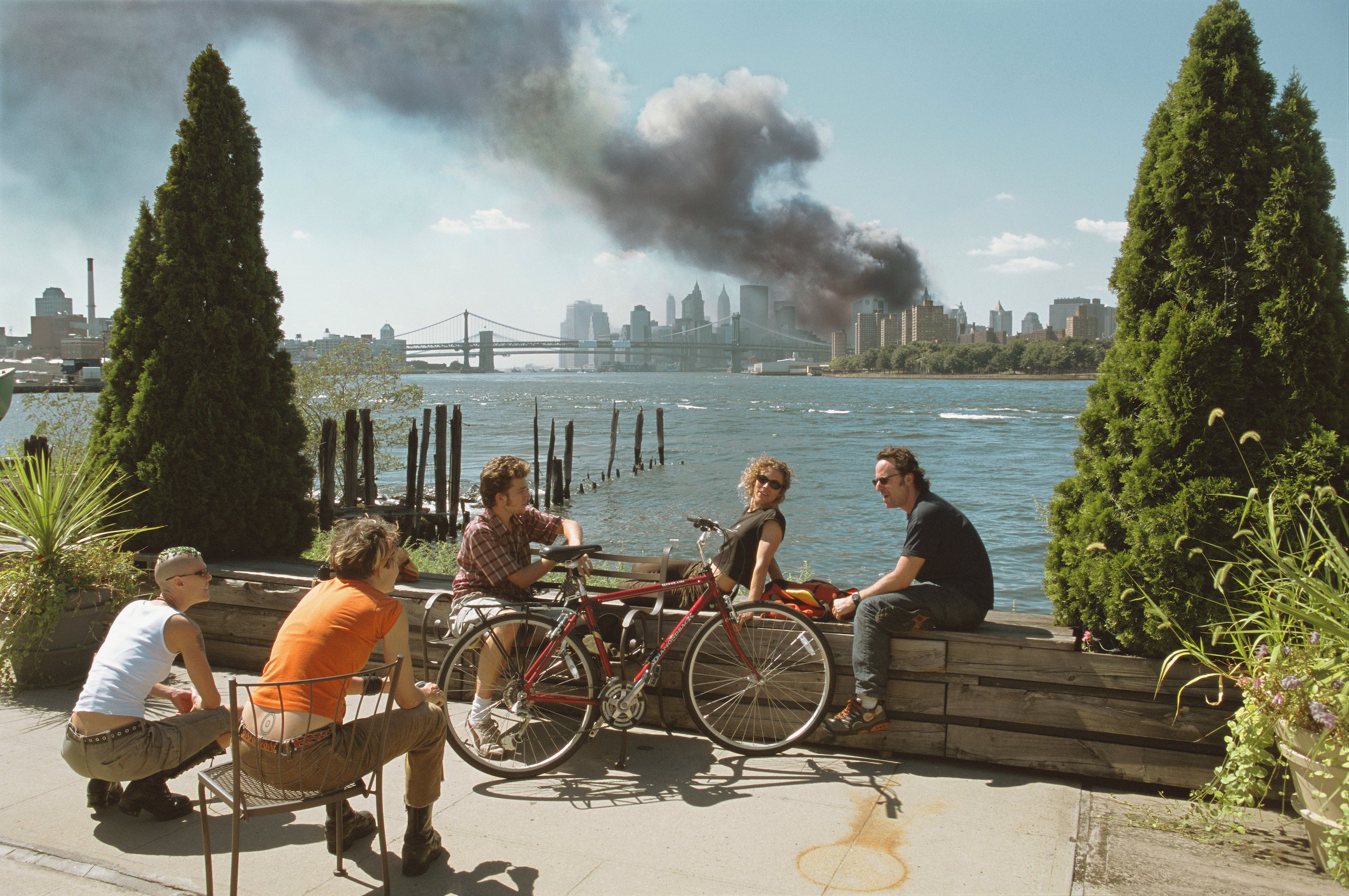 USA. Brooklyn, New York. September 11, 2001. Young people relax during their lunch break along the East River while a huge plume of smoke rises from Lower Manhattan after the attack on the World Trade Center.

“The terrorist attacks on September 11, 2001, were without a doubt the most significant historical event in recent decades. And now, we are in the midst of another and far more severe global crisis that is affecting our lives and will have consequences for years to come. I have been thinking a lot about this image I took that fatal morning on the shores of the East River, looking at the smoke rising from the fallen twin towers. I passed by in my car and saw a group of people sitting seemingly relaxed in the sun. I clicked the shutter a few times and drove on.

It became a controversial image, taken in a split second, documenting a tiny slice of reality without interfering with people’s behaviour or body language. But somehow in the eyes of observers, critics, and scholars it also became a symbol of hope, suggesting that life does and will go on; that we are strong and will overcome. I’m confident that this will be the case also during the current global coronavirus pandemic.” 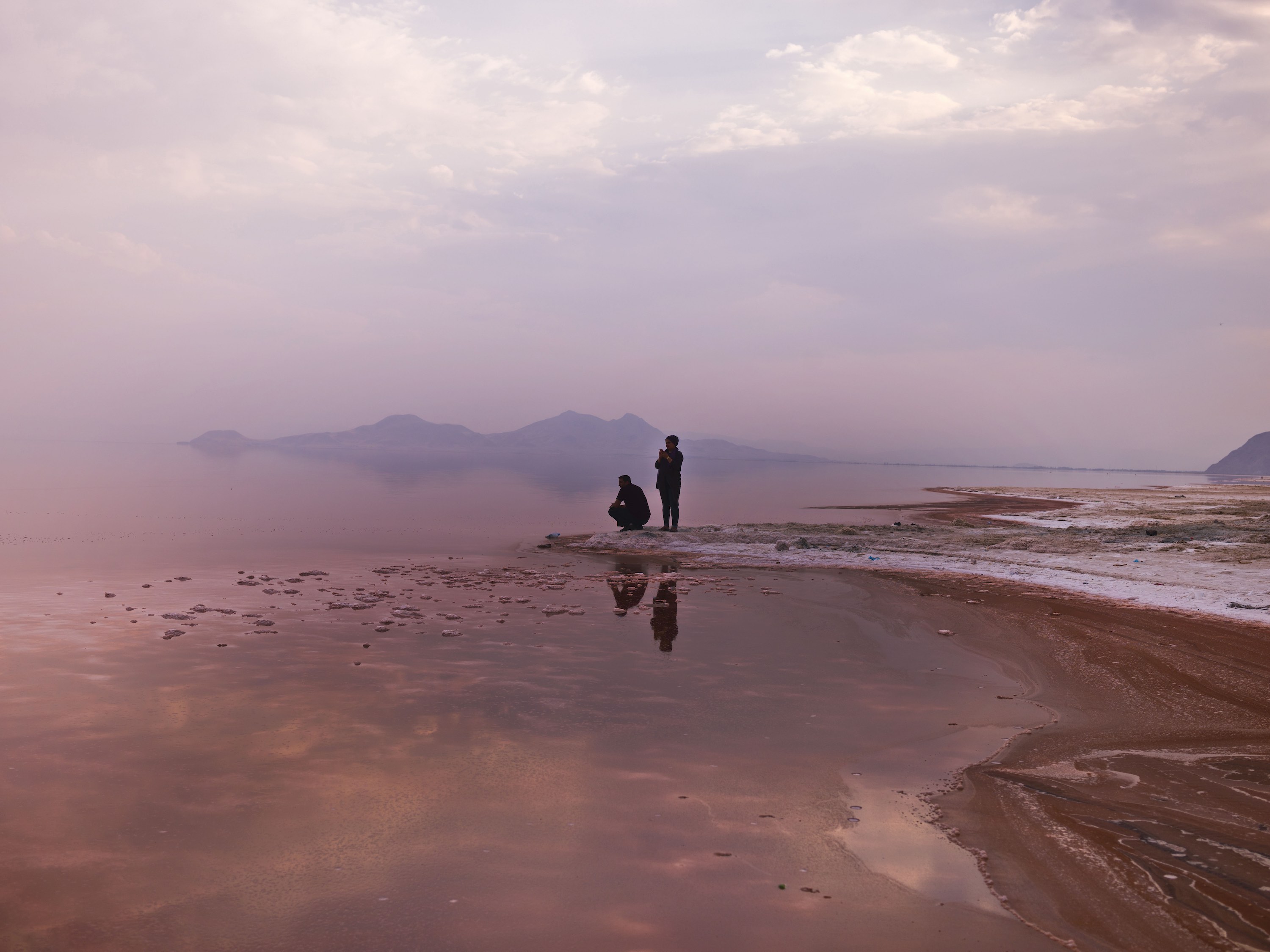 “An Iranian couple staring out over the Urmia salt lake in northwestern Iran. The lake was drying up and seemed beyond saving, dying. But after unexpected rains last year, water levels have risen and the lake might just be around for a while longer.”

Turning Points, Magnum’s Square Print Sale in collaboration with The Everyday Projects, runs from Monday, April 6 to Sunday, 12 April, 6PM EST, 2020. Prints from over 100 visual artists will be available for $100 from magnumphotos.com/shop.
Magnum photographers will be donating 50 per cent of their profits from this Square Print Sale to MSF’s (Médecins Sans Frontières) COVID-19 emergency response.
Enjoyed this article? Like Huck on Facebook or follow us on Twitter.

Linkedin
RELATED ARTICLES
OTHER ARTICLES
Photographer Becky Tyrell went down to the fading banger and stock raceway to meet a community desperate to keep it alive.
Theo McInnes’s photos of the annual event provide an intriguing snapshot of contemporary Britain.
AI companies that develop image-generators using copyrighted artwork from the internet are coming under fire from artists who say that it amounts to theft.
At his West Bank restaurant, Fadi Kattan established himself as the voice of modern Palestinian cuisine. Now, he’s bringing his innovative, bold flavours to the UK’s capital.
As she gears up for the release of her first book, the 24-year-old climate activist talks standing up to authority and building a more inclusive movement.
Filmmaker Laura Poitras discusses her new documentary which traces the remarkable life of the artist-activist and the impact of her battle against the US opioid crisis.