Art & Culture / The Firestarters: meet the photographers who captured punk 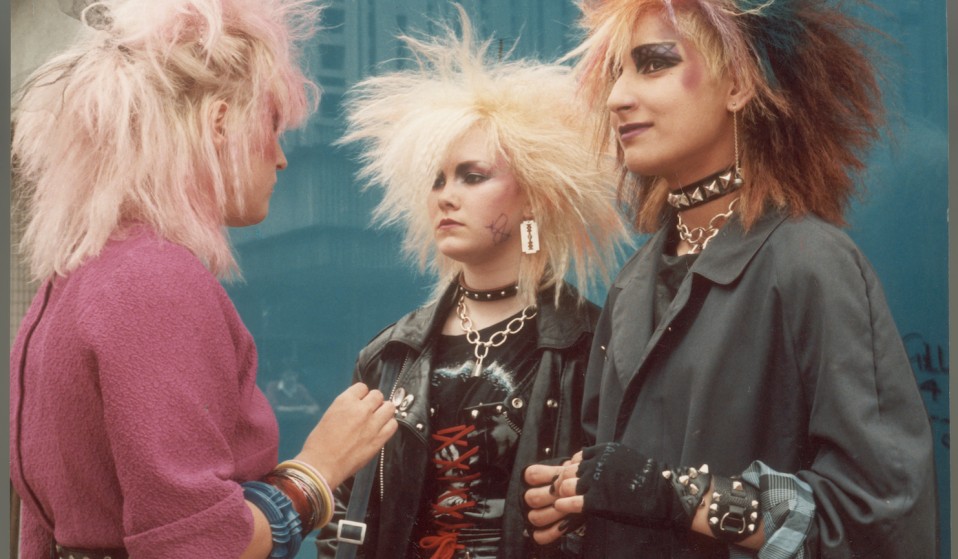 Punk London’s year-long celebration takes over the Photographers’ Gallery with an exhibition of punk portraits.

As Punk London’s year-long celebration takes over the Photographers’ Gallery with an exhibition of punk portraits, photographers Derek Ridger and Anita Corbin share the stories behind their iconic images.

The Photographers’ Gallery is not a ragged building. Large windows run straight up and down; inside, the decor is clean, cool and modern with black tile floors and light wooden tabletops. Not, in other words, the most punk venue in London.

And yet gathered in the café, chatting amiably, are figures from just about every British subculture from the 1970s. The Stranglers are playing over the sound system. Amid the crowd of (mostly) normally-dressed people are figures with striking home-made tattoos, parents with Mod-ish children, women with skinhead buzz-cuts.

This is the opening night of the Punk Weekender, the latest in a string of events by Punk London designed to celebrate the subculture’s 40th anniversary. 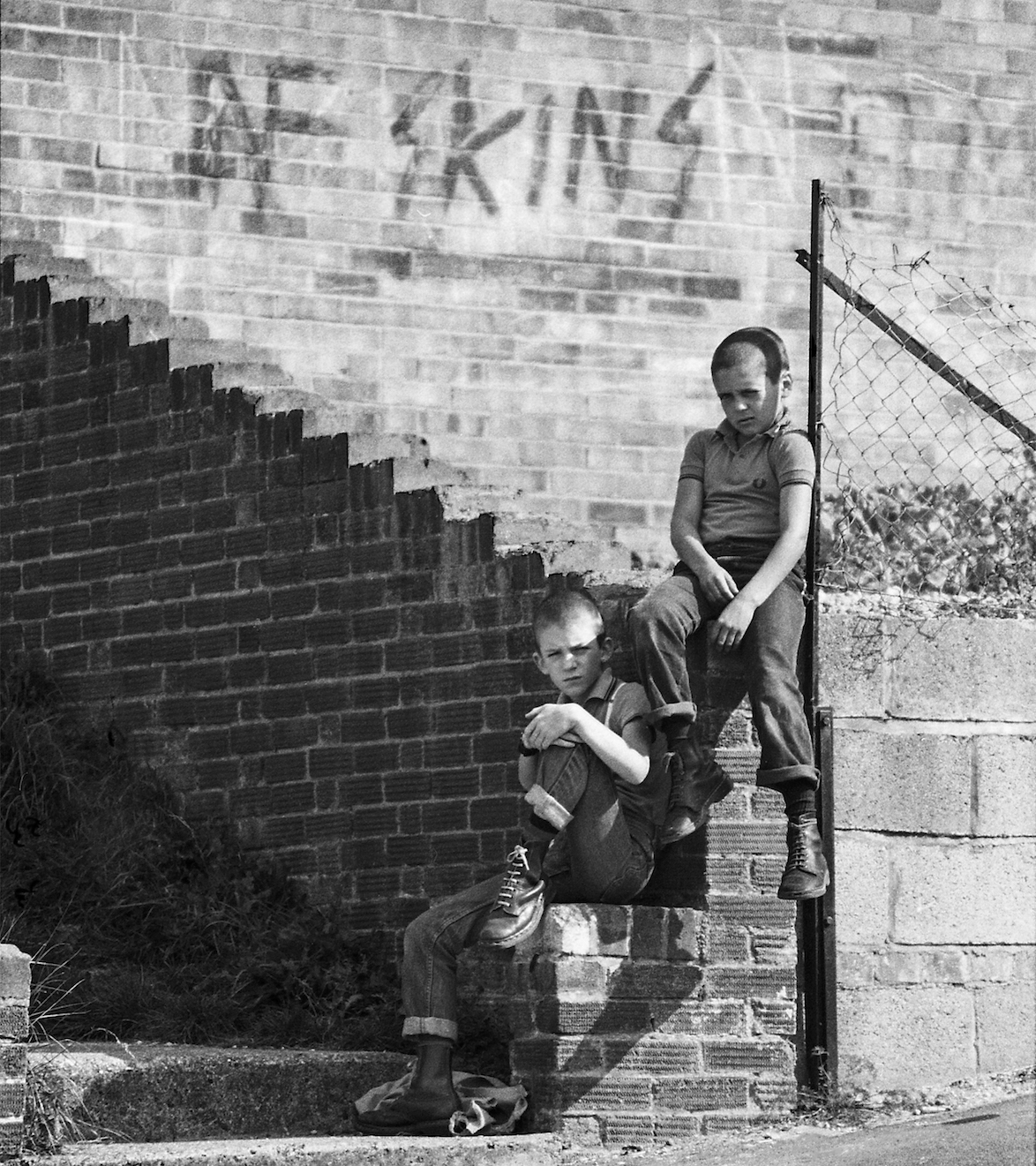 The weekender itself runs from June 23-26, promising a catalogue of talks, a performance by The Raincoats and an exhibition of photographs by Derek Ridgers, Anita Corbin, Janette Beckman, Owen Harvey and Shirley Baker.

In a quiet corner, away from the crowd, Derek Ridgers recounts his experiences. A tall man with thick glasses and an iron-grey ponytail, he has less the look of a punk as that of a hardened photographer who has seen his fair share of change.

“I was never a punk,” he says, when I ask him how he feels about the formal setting for a body of work documenting anti-establishment groups. “I don’t feel ownership of any part of the punk history. I was just there recording it and would like people to see it.” 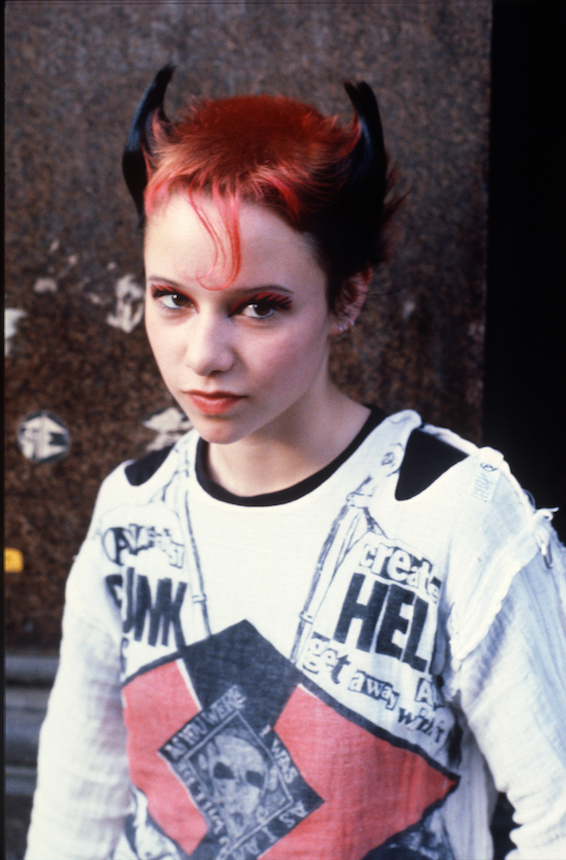 Since his first show, Some Punk Portraits, at the ICA in 1978, Derek has worked hard to share the subculture’s story. The only backlash he’s experienced has been not from punks but from comments on the Guardian.

“I didn’t read most of it after the first couple of pages because it seemed I couldn’t do right by either of them,” he says, chuckling.

And it wasn’t just punks that piqued Derek’s interest. Much of his work has focused on fringe culture figures from all walks of life – including skinheads (the source of the Guardian comments), prostitutes and rent boys. 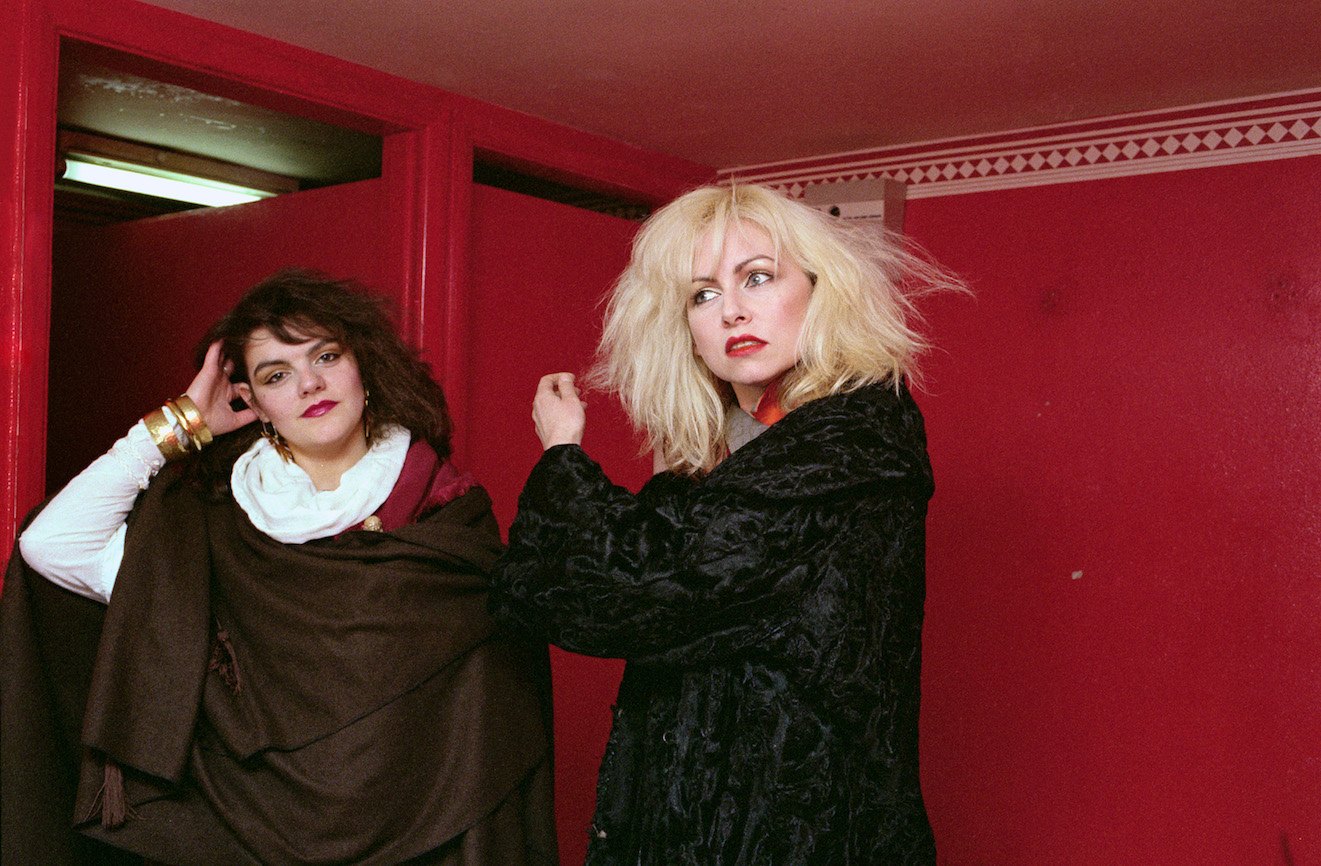 Over time, he has come to realise that much of what he was doing was driven by a vicarious curiosity. “I suppose I felt I was an only child and my parents weren’t particularly sociable,” he says. “I felt like I was looking through a window into a slightly more interesting world.”

That world has, of course, changed considerably in the last forty years. And the greatest trigger, in Derek’s view, is something undeniably millennial.

“The biggest [change] really is social media. I think nothing has a chance to gestate out of the public eye, so it can’t really grow and evolve with its own time. It’s either got to be born and be perfect, or it gets destroyed by online derision.” 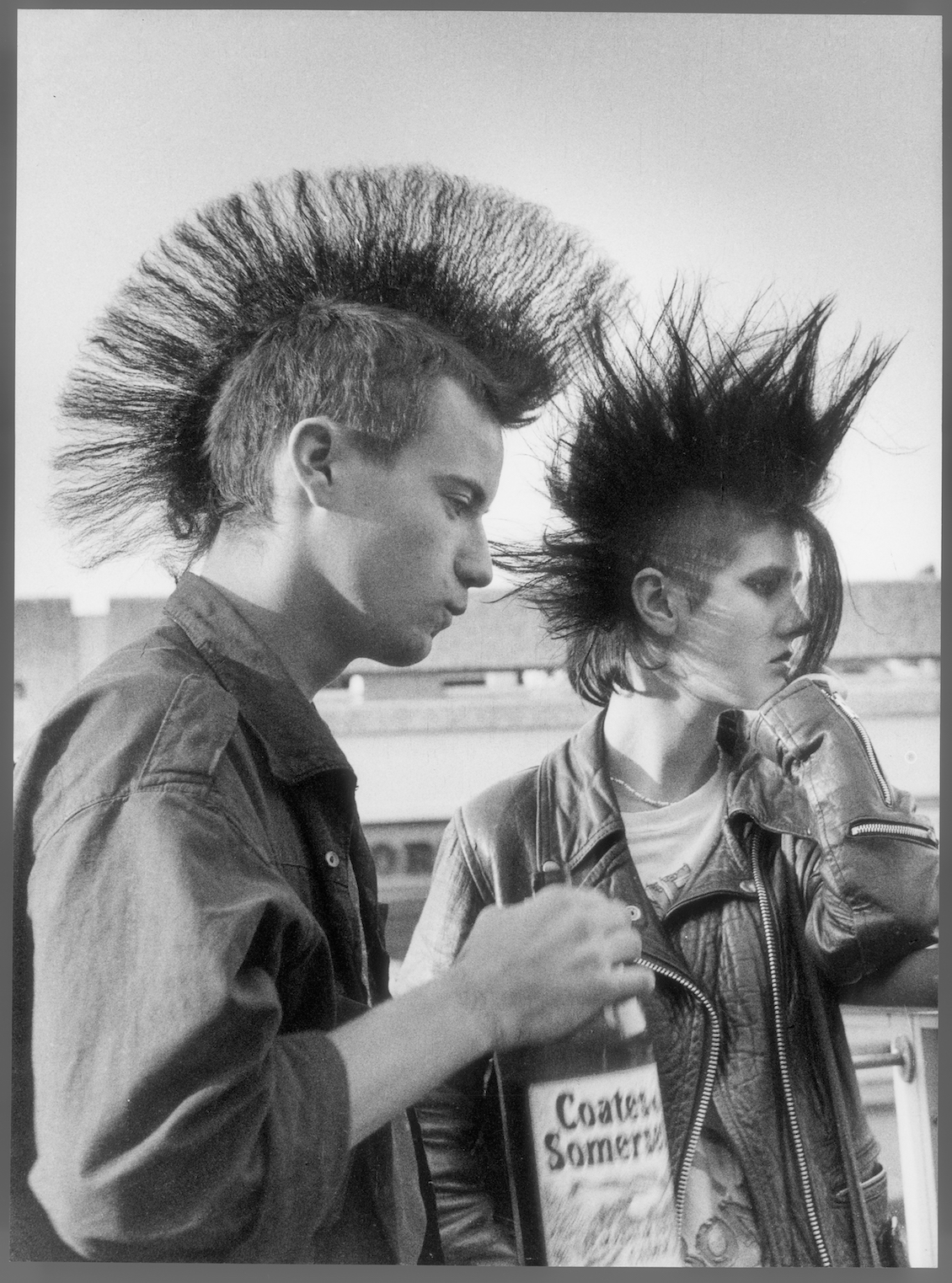 But for punk, it’s also been something of a boon. “Punk has gone global,” he tells me. “There are Chinese punks, lost punks in East LA and South Central, and every one of them has got their own idea of what punk is.”

Derek was in many ways an outsider, but Anita Corbin, known for her project Visible Girls, wasn’t afraid to get stuck in. “As Visible Girls developed I realised it was about friendships, and the strength of having two young women together who might have been friends, or sisters, or lovers, and the fact that they had a relationship,” Anita says.

“Then I came in as the third point of the triangle, as it were. It really sort of made the point of who I was, as well, and how I was trying to find my identity. I was more or less the same age, so it was a collaborative affair. It wasn’t a quick snapshot in the street.” 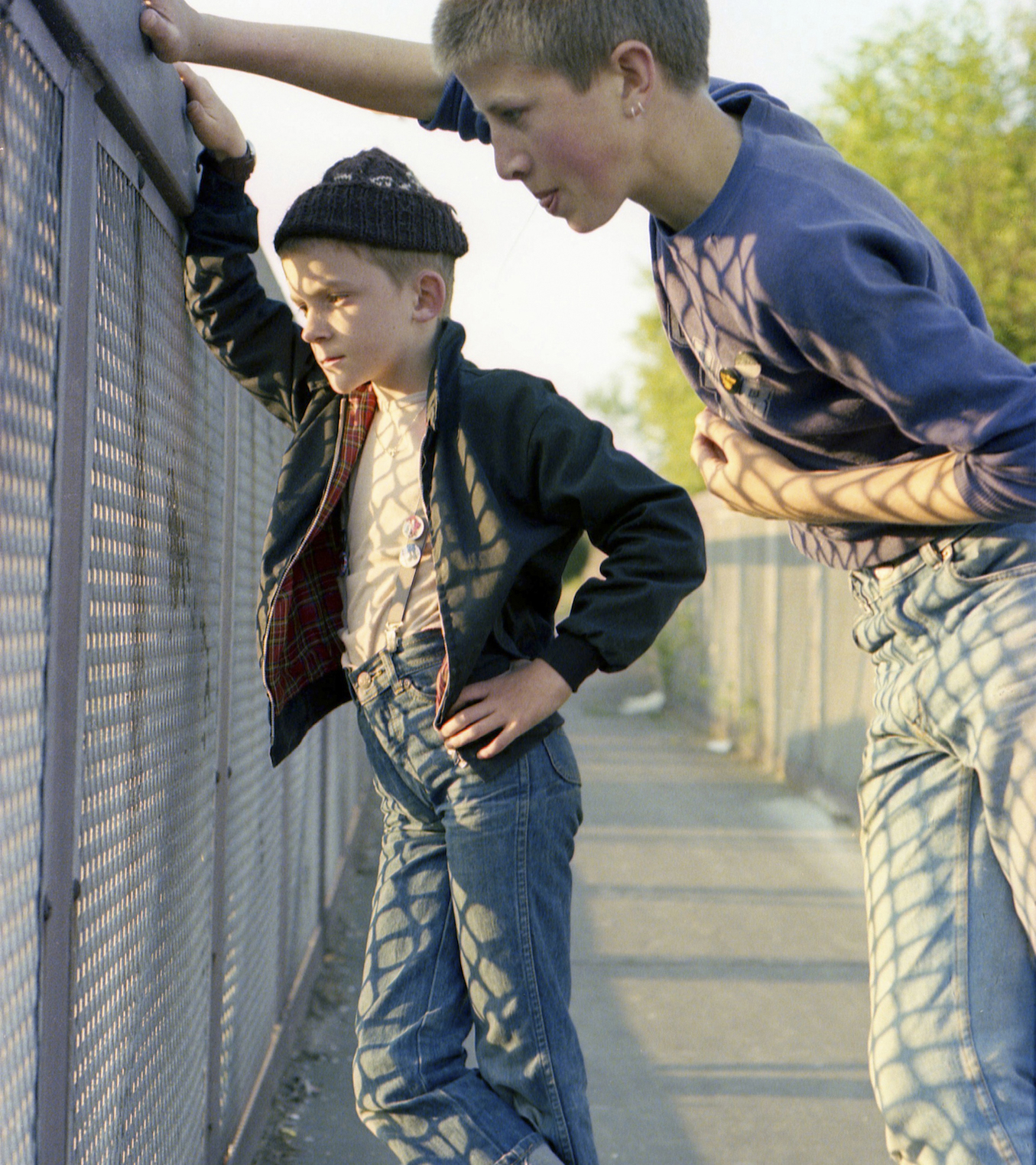 Anita experienced the 1980s punk scene as a young photographer in her twenties; today her short black hair is streaked with blue. As we talk, she is approached repeatedly by previous subjects, now friends, eager to catch up and discuss the photos.

One of them, Di – whom Anita calls “the only punk in the show” – can be seen with her friend Shelley in a key photograph from the exhibition.

From her vantage point, female rebellion stuck out as something worth recording, not least because previous photography “had always been around the boys and violence”. The women she was surrounded by were breaking all the expectations of how women should dress, behave and be. 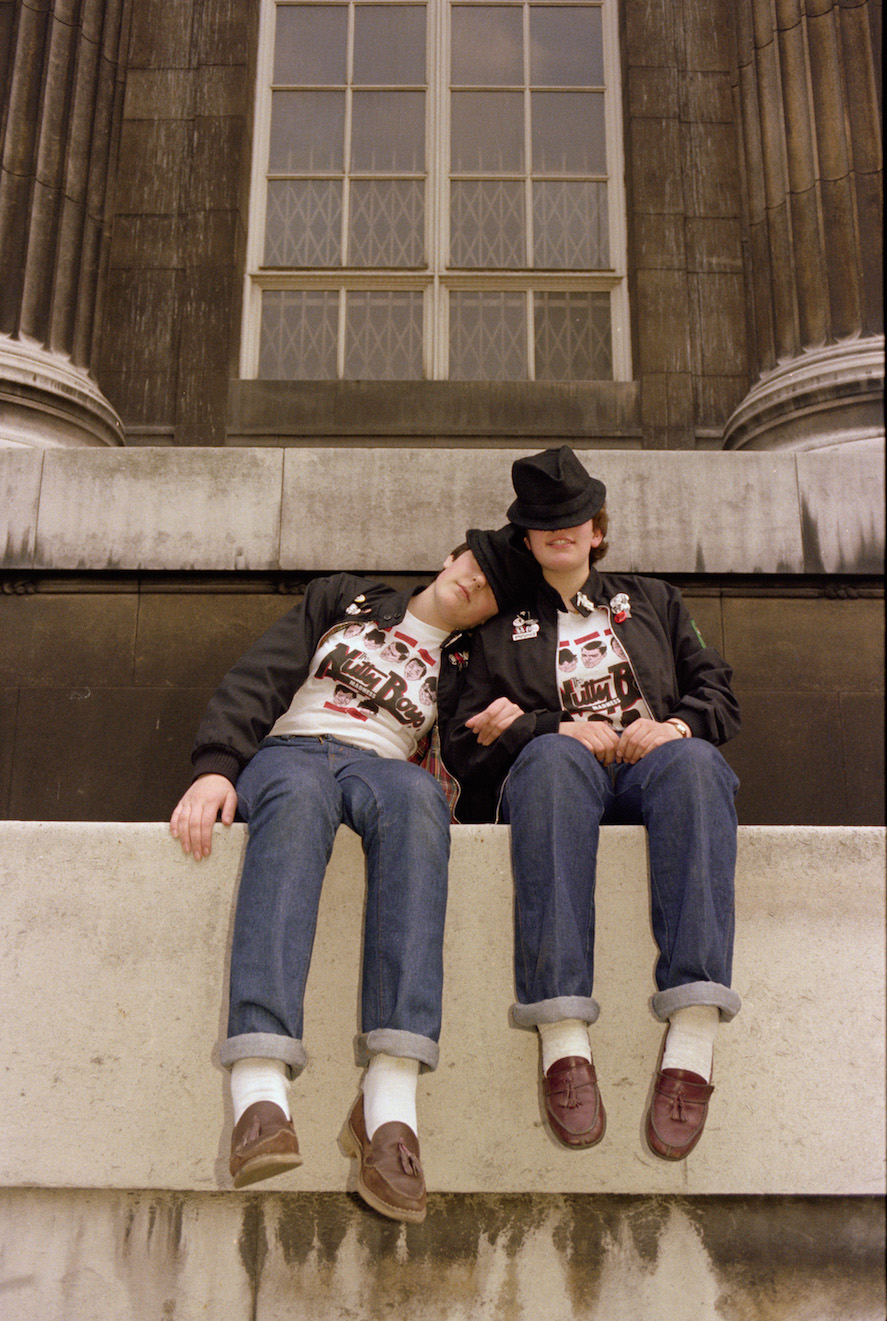 Now that four decades have passed, Di can’t help but be nostalgic. “Wherever you went, you would talk to the punks,” she says of her days and nights out.

“I can’t imagine that today people would talk to each other just because they look similar. It was fresh; it was alive; it was new; it was exciting. I think you don’t have that anymore. Now it’s something different but, 40 years on, it doesn’t have that rush. Maybe it’s just because I’m 40 years older!”

As we gear up to leave, we strike up conversation with a man dressed all in black, with long hair and a homemade Adam Ant tattoo fading on his arm. This is Matt, an IT Manager for a small school. “Now I’ve become the system… but I’m working from within to bring it down,” he says with a grin. “After all, that’s really what punk’s all about.”

Punk Weekender runs at the Photographers’ Gallery until Sunday, June 26.

Linkedin
RELATED ARTICLES
OTHER ARTICLES
The last few years have seen an increase in LGBTQ-led initiatives to feed the hungry, with many finding ways to stay afloat despite the challenges.
Photographer David Hoffman recalls documenting the extreme wealth inequality around Tower Hamlets and Hackney int the 1980s.
Yesterday queer activist group Lesbians and Gays support the Migrants staged a die-in at the Pride in London parade to protest the inclusion of police in the march reports Huck politics editor Ben Smoke.
Finland-born photographer Sirkka-Liisa Konttinen looks back on her decades-long documentation of life in Northern England.
With inflation now at a 40-year-high of 9 per cent, demonstrations organised by TUC took place to demand action from the government.
Whether it's partygate, the climate crisis or the spiralling cost of living, the fightback begins on the picket lines writes Tommy Vickerstaff