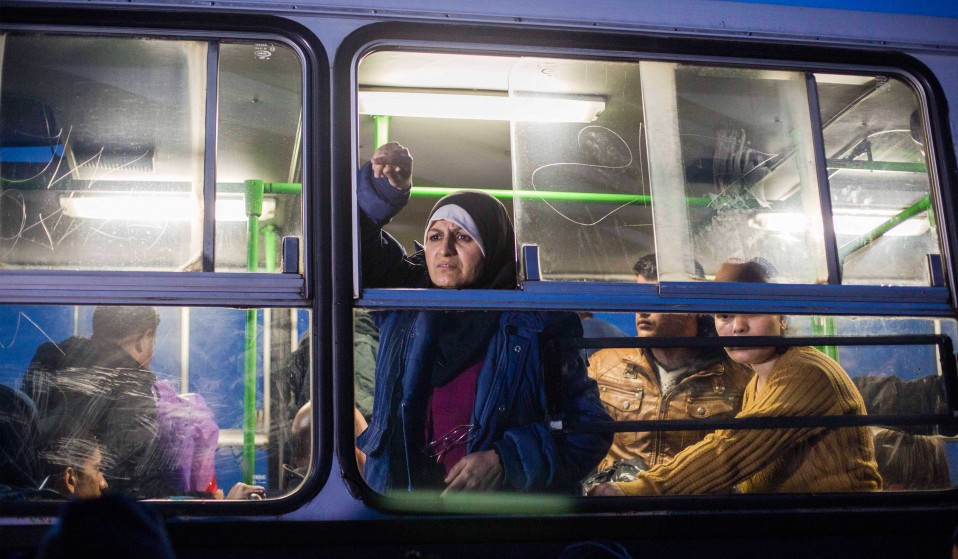 Over two weeks, Adam Patterson travelled with refugees making the harrowing journey across Europe to shoot a powerful new documentary.

Mohammed and his daughter decided to leave their home in Raqqa when fifty-five severed heads appeared on spikes on a nearby roundabout. Ordinary life was impossible in ISIS’s de-facto capital and the city was no place to raise a child. So, like millions of other Syrians, they fled and became refugees.

Mohammed and his daughter’s story is just one of the harrowing testimonies documentary photographer and filmmaker Adam Patterson heard while shooting Europe’s Border Crisis: The Long Road. Fronted by veteran journalist John Sweeney, the BBC documentary follows a group of predominantly Syrian refugees over fourteen days as they make their way through Europe in search of sanctuary, from the Greek island of Kos through Macedonia, Serbia, Hungary and finally to Austria. 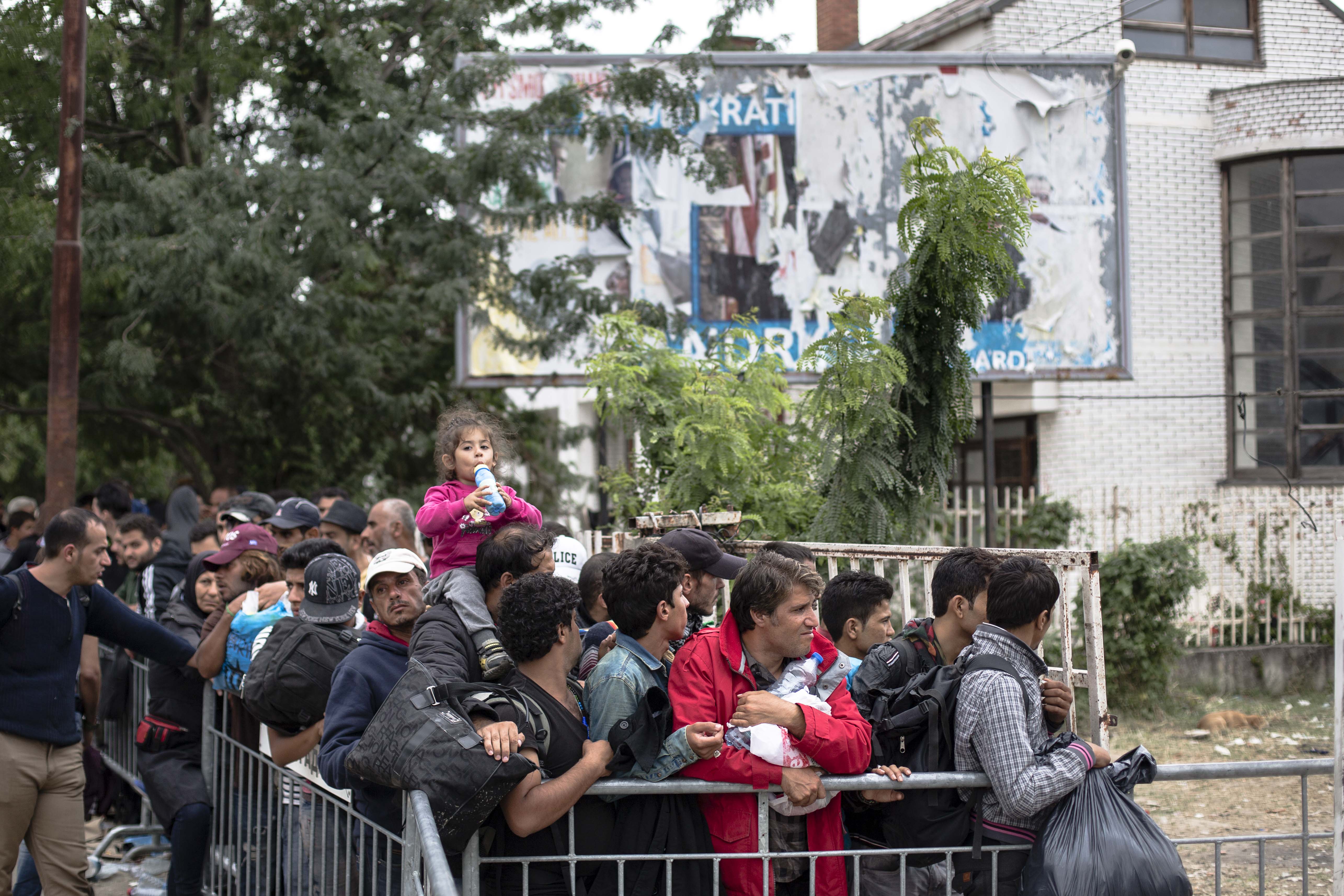 Refugees from various countries at wait for regristration in Serbia.

“I’d seen the pictures in the news of people crossing borders and knew there was this exodus of people, but the thing that shocked me the most was just the sheer volume of people,” Adam explains. “These people aren’t taking this journey lightly. They’re taking it because they believe this is the only way and they will risk their lives, literally, to get there. You sit and witness that and it really does impact you. Especially when there are kids, women, the weak and the injured, all mixed in together, it’s quite overwhelming.”

Adam and his team began where hundreds of thousands of refugees have arrived on flimsy dinghies from Turkey and taken their first steps on European soil this Summer: the Greek island of Kos. “It is the most surreal refugee situation I’ve ever seen,” Adam explains. “It’s a tourist island and has been taken over by refugees. The juxtaposition between the tourists and the refugees was just black and white, night and day, right in front of you.” 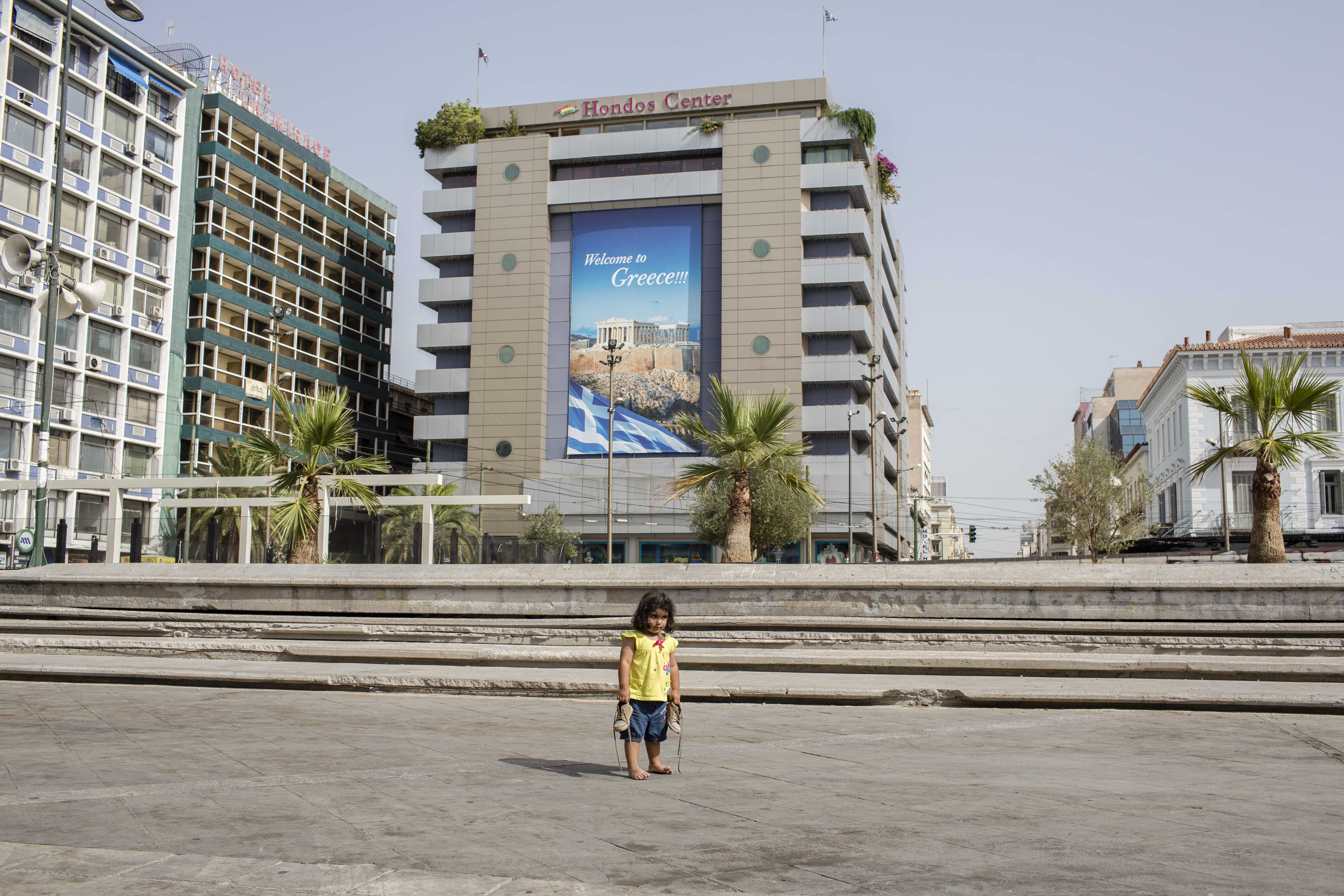 Paralysed by a severe economic crisis, the Greek government has struggled to cope with the numbers of refugees who have arrived on Kos. With little official provision available, some ordinary Greeks and tourists have stepped in to offer money, food and shelter. But most refugees sleep outdoors, on the same streets tourists amble along in their swimwear, to and from the beach, while they wait for the papers they need to continue to mainland Greece.

Smartphones have proved a vital lifeline for refugees, helping them find a route, re-establish contact with missing loved ones or avoid dangers, such as police and far-right attacks. However, pictures of refugees with iPhones have made people question whether they really need support. “Some of these people do have money, they have worked hard,” Adam explains. “They have businesses back in Syria, but if they stay there they could end up dead. You don’t have to be poor to be a refugee.” 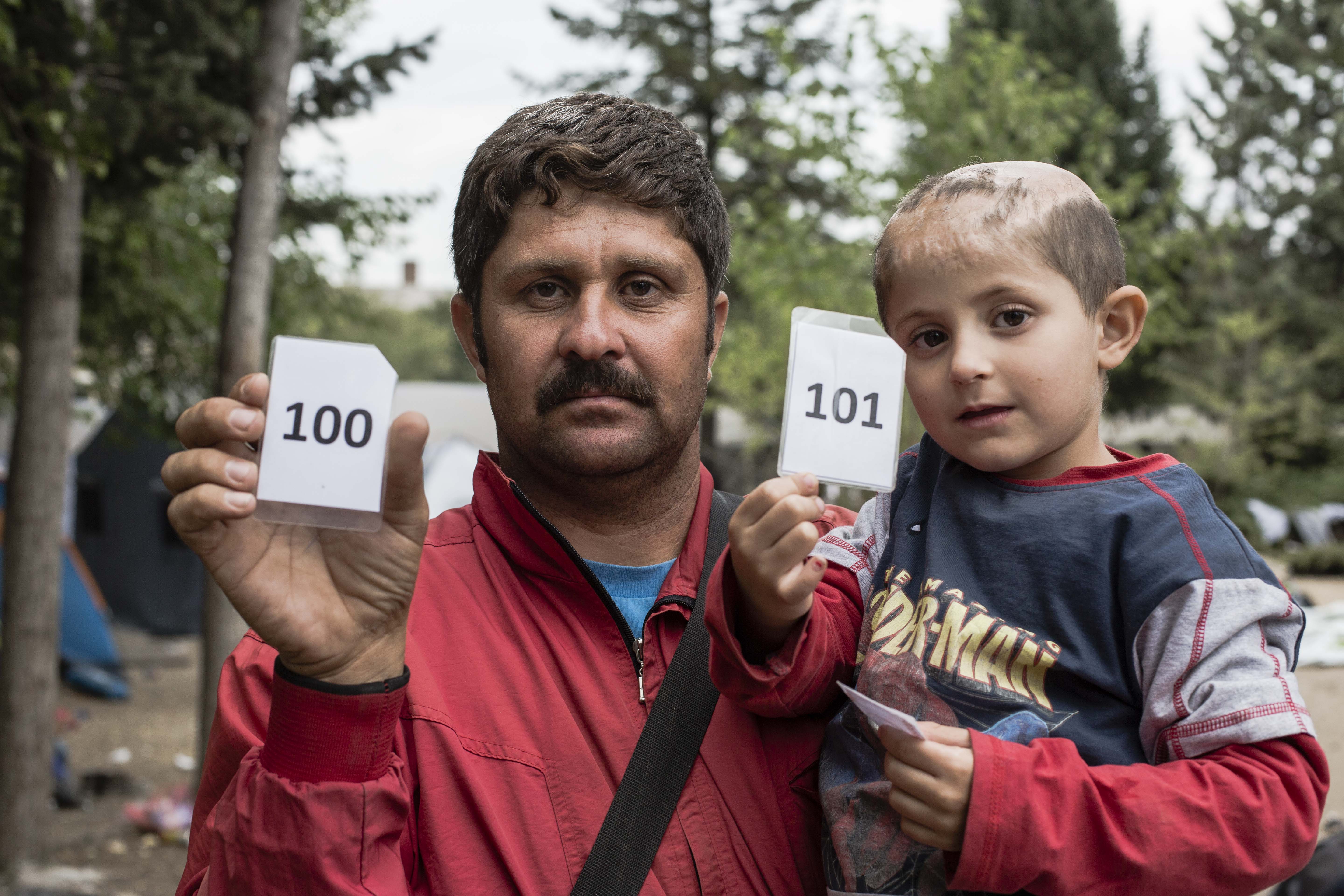 Abdul with his son who was injured in a barrell bomb attack in Syria. As part of registration in Serbia they are given a number in line. Their next step in Hungary.

Adam heard people referring to the crisis as “the Whatsapp exodus” and smartphones allowed his team to stay in contact with people as they made their way north. “It was phenomenal to follow the story through pictures and videos from people we actually documented, while we were still out there,” Adam explains. “Quite a few of those are actually in the film.”

Over two weeks of shooting, the situation was constantly changing. They began in Kos in early September, just after Germany announced it would accept all Syrian refugees in order to relieve a build-up on the Hungarian-Serbian border. After opening for a brief period, the border was closed again as they wrapped. 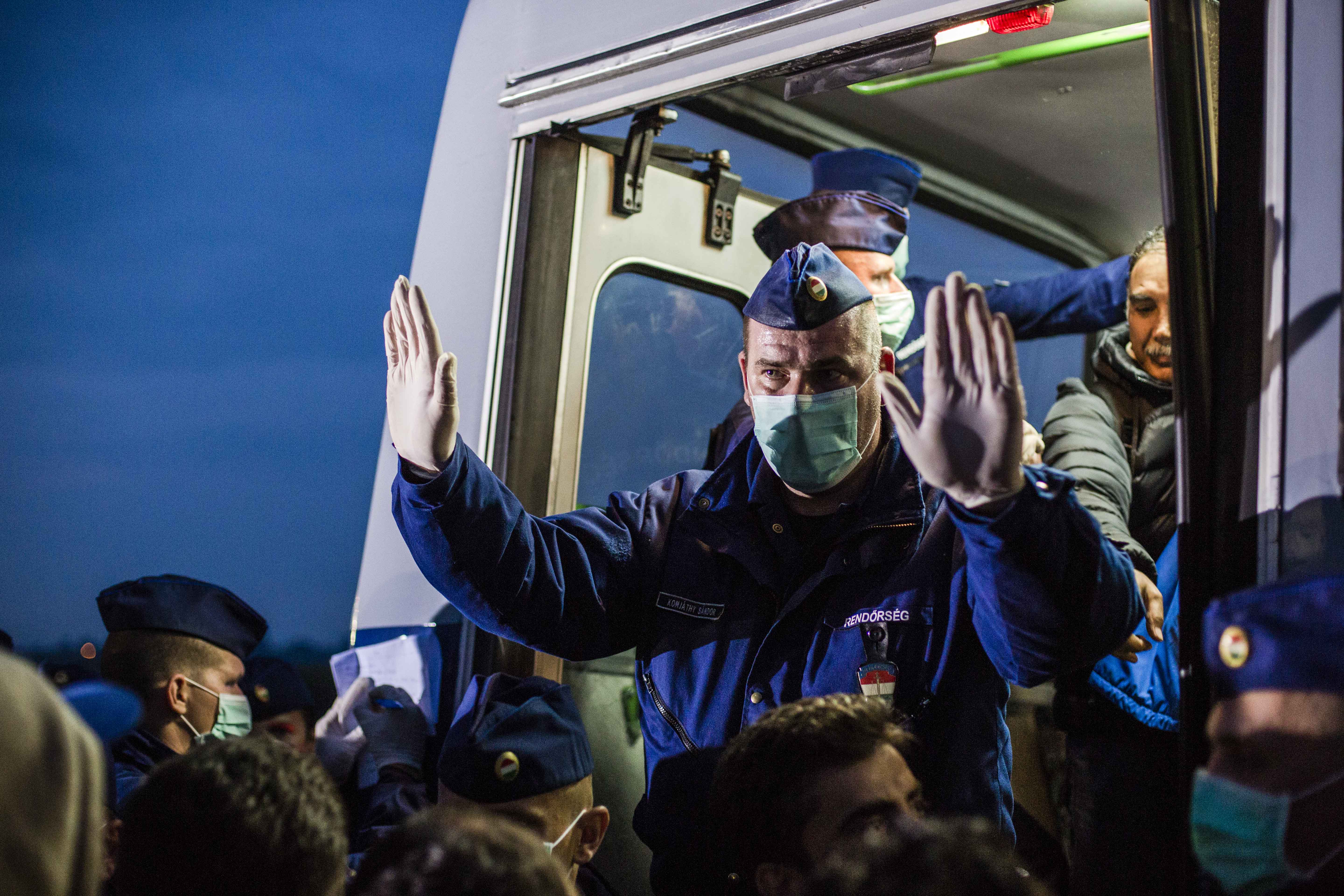 Röszke, Hungary. Hungarian police maintaining order as people try and get on a bus to go to a registration camp.

They witnessed people rushing to avoid being stuck in Hungary, where refugees have received some of the worst treatment. “Everywhere else you saw sad things and had to go through this period of registration and it was lethargic and repetitive,” Adam explains. “But in Hungary it just seemed to be that the government were making it more difficult than they really had to. They were making it more intimidating, using razor wire on the registration camps, officials were all wearing surgical mask and the policeman looked and felt more militant. The tone changed in Hungary. A lot of people like myself really felt disappointed with the way the refugees were being treated there at that time.” 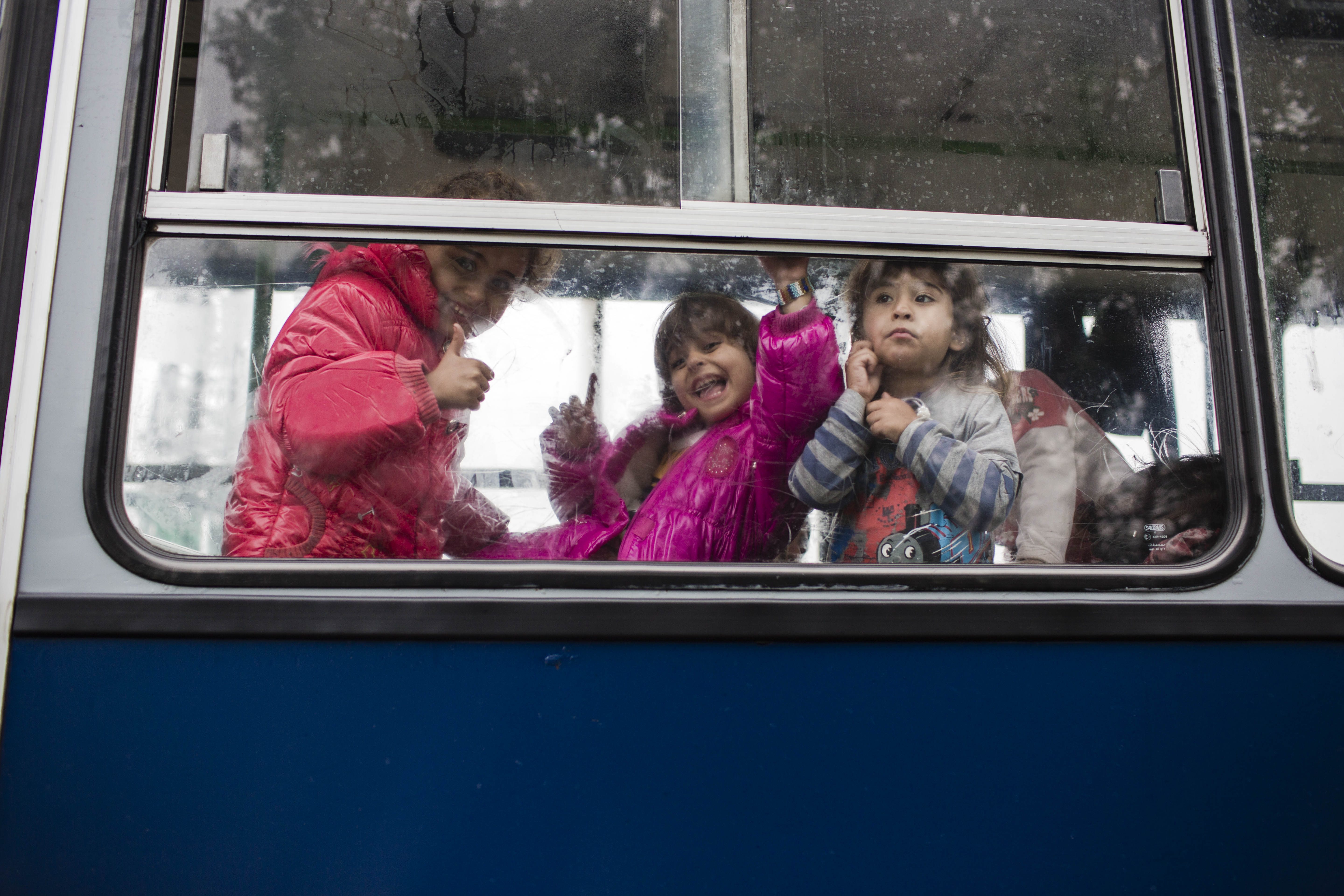 Children waiting on a refugee bus in Hungary.

But many of the people Adam and his team followed eventually made it to Austria, and later on to Germany where most were heading. Although for some characters in the film, there are happy endings of sorts, Adam is conscious of the need to build our understanding of the situation – and keep pressuring governments for real action.

“We live in a very privileged and closed-off society and unless something’s really directly affecting you, then often you don’t take much notice of it and I’m as guilty of that as anyone else – it’s not that I didn’t have empathy for these people,” he explains. “But I do think governments, with the knowledge that they have, firstly of the people that are already on the move, and secondly the fact that many more will come during the winter; they need to find a solution before the temperatures start dropping and people start freezing to death on the streets across southern Europe.”

Europe’s Border Crisis: The Long Road is available to view on BBC iPlayer. Grab a copy of Huck 52 – The Documentary Photography Special III to read Adam Patterson’s ‘To Hell and Back’ story.

Linkedin
RELATED ARTICLES
OTHER ARTICLES
This handy video breaks down the Syrian conflict and shows why it has created a refugee crisis across the Middle East and Europe.
Huge public pressure has forced European governments to respond to the global refugee crisis. But for the three thousand people living in deplorable conditions in The Jungle, relief is a long way off.
If you're shocked and appalled by what you're hearing and seeing about the refugee crisis, here are some practical things you can do to help.
Organisations like CalAid, Refugees Welcome and the thousands of Icelanders offering their homes to displaced people, are doing more than responding to an international emergency, they're building a better Europe.