Art & Culture / Photography / Lensman of US counterculture Glen E. Friedman on how his Fugazi book came about 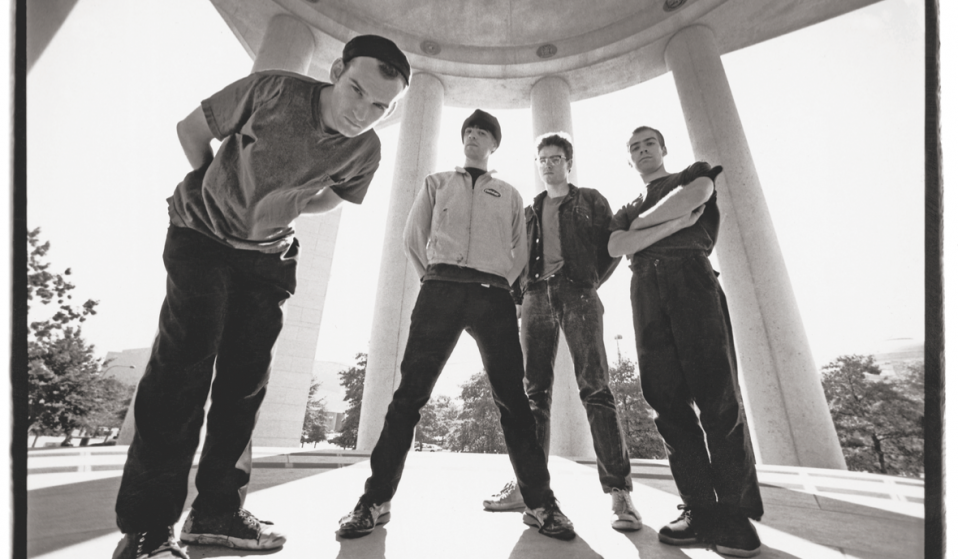 Ahead of the release of Glen E. Friedman's new book MY RULES, we look back over the origins of his story.

Ahead of the release of Glen E. Friedman's new book MY RULES, we look back over the origins of his story. The visual place where skateboarding, punk and hip hop collide. This story first appeared in Huck 8, 2007.

They say that timing is everything. Act at precisely the right moment and you’re bound to come up with something original, urgent and, if you’re lucky, absolutely truthful. While many artists lack instinct, photographer Glen E. Friedman has built a career on perfect timing – knowing just when and where to capture the moment that otherwise would have gone undocumented. His impeccable eye, paired with his heart and ability to decipher between what is and isn’t genuine, have allowed him to capture some of our generation’s most important images. Skate, punk, hip-hop – Glen’s presence at the dawn of each subculture can never be replicated.

Glen was published for the first time in 1976, at the ridiculously young age of fourteen. “It was a full-page subscription ad of Jay Adams for Skateboarder Magazine,” says Friedman. “I got paid $40 and from that day on I’ve had a picture published every month.” Glen began hanging out in West LA, in the shitty, seedy area also known as Dogtown. It was there that he discovered skateboarding, and the personalities who drove the revolution – the kids who skated empty pools for the very first time.

By sixteen, Glen was Skateboarder Magazine’s youngest and most frequent contributor. “Skateboarding isn’t as big now as it was then, but around ’76, ’77, it was really huge and Skateboarder was the bible,” recounts Friedman. “It was the number-one selling magazine outside of porn, and because of that I was able to gain a reputation. When I travelled around the world and there were skateboarders, people knew who I was. When I went to punk shows, people would recognise me from Skateboarder.” He began attending punk shows, shooting bands like Black Flag, Dead Kennedys, TSOL, The Circle Jerks, Bad Brains and Minor Threat, documenting a scene that had yet to grace the mainstream with its important presence.

Around the early eighties, punk rock began to die out. In Glen’s eyes, it was becoming stale, generic and lacked the creative energy it once had. A friend gave him some hip-hop tapes of the genre’s earliest recordings dubbed off the radio. “I was getting turned on to this music. It was like punk rock was at the beginning, something totally insane and nothing anyone else was doing,” says Glen. Loving the new sounds he was hearing, Glen crossed over to shoot hip-hop legends like the Beastie Boys, Run-DMC, Public Enemy and LL Cool J. Once again, he found himself at the forefront of a burgeoning subculture.

It was no coincidence that Glen was drawn to these three distinct, rebellious and invaluable movements over the years, no stroke of luck that he captured the birth of each scene. “I shot pictures of the people who inspired me because I wanted to spread that inspiration around. I wasn’t trying to do some cultural snippets of some weird world. I was trying to show that this is something strong,” explains Glen. “It wasn’t like I was an outsider wanting to shoot these things,” he continues, “I was involved in these scenes. When you have these voyeurs coming in to shoot this certain thing because it’s hot or it’s what the young kids are doing, it’s fucking lame. They may get a good shot now and then, but do they really feel it?”

Having published various books containing portions of his vast archived photos throughout the years, in 2007 Glen dropped a definitive book, Keep Your Eyes Open, a collection of photos of Fugazi, ranging from 1986 to the band’s final show in 2002. Glen first met Fugazi front-man Ian MacKaye at a Bad Brains show in ’81 while Ian was still fronting Minor Threat. After hearing Minor Threat’s EP, In Your Eyes, Glen was blown away. “I wrote Ian a letter which was like my first fan letter and it said that I thought it was the greatest fucking record I had ever heard,” remembers Glen. “After that, I saw Minor Threat every time that I could.”

Minor Threat would break up in ’83, leading Ian MacKaye to embark on a series of music projects, one of them being Fugazi in ’87. “They were totally different from Minor Threat but they were like a whole new level. He had a different group of guys but still had that same intensity,” says Glen about the first time he saw Fugazi. “I forgot my camera that first show, but I vowed to bring it to every other show to help spread their inspiration around.”

Over the following years Friedman would go on to shoot Fugazi endlessly both on and off the stage, and many of these images feature in Keep Your Eyes Open. The book contains some 200 colour and black and white shots showcasing a spectrum of moments, ranging from on-stage ferocity, to candid portraits of the guys on tour. Being close friends with the band, Glen was able to capture a certain honesty and intimacy that is carried wholeheartedly throughout the book. “They gave me total access to do or be wherever I wanted,” he says. “I could pop up in front of the microphone in the middle of the song and get a shot, just to get an interesting photo of the band.”

In a world where success and timing supposedly go hand in hand, Glen E. Friedman has added heart, soul and truth to the equation – documenting the result for the world to see.

Keep Your Eyes Open is published by Burning Flags Press and is available on the website.

Linkedin
RELATED ARTICLES
OTHER ARTICLES
To celebrate 10 years of Huck, we're digging through the archives to unearth stories that feel as relevant as ever. When photographer Janette Beckman started documenting underground communities in the US, she had no idea it would change youth culture forever.
Prolific music photographer presents his intimate portraits of '90s Welsh glam rockers Manic Street Preachers.
Iconic music photographer Michael Putland reflects on one of his favourite photos from his archives featuring Bob Marley, Mick Jagger and Peter Tosh.