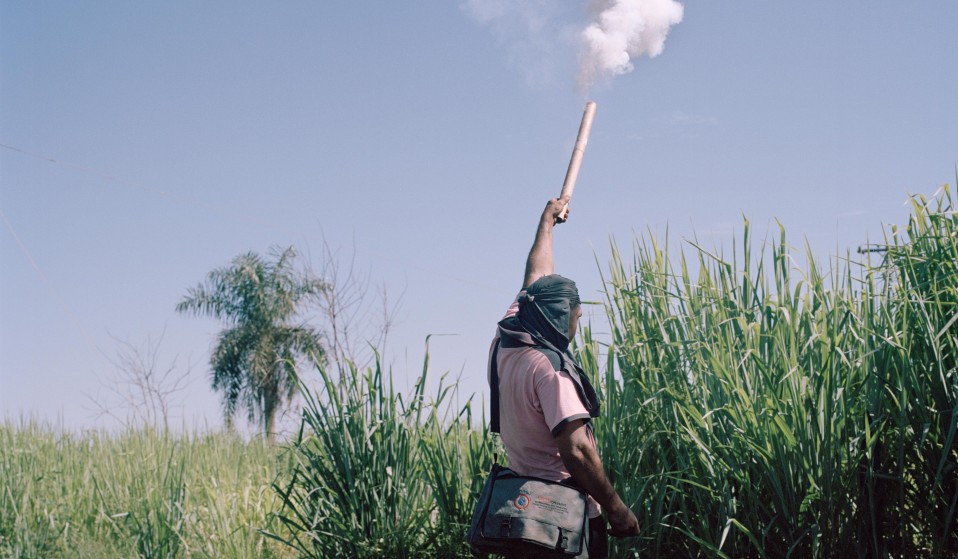 Not much remains of Guayaqui Cuá in southeastern Paraguay. As fires continue to smoulder, wisps of smoke float over the charred slats of a wooden bed, burnt personal possessions and a few sombre peasants living under makeshift plastic tents, which are all that’s left of this small rural community.

Two days ago, security men from the nearby cattle ranch and local police officers, under orders of a large estate owner, moved in without notice to evict the community and raze their properties to the ground, explains a tearful María Lina Estorales. Sitting despondently on the dirt floor and wiping rivers of tears from her face, she’s trying to work out what to do next – surrounded by members of the other 21 families who lost their homes in the illegal eviction. 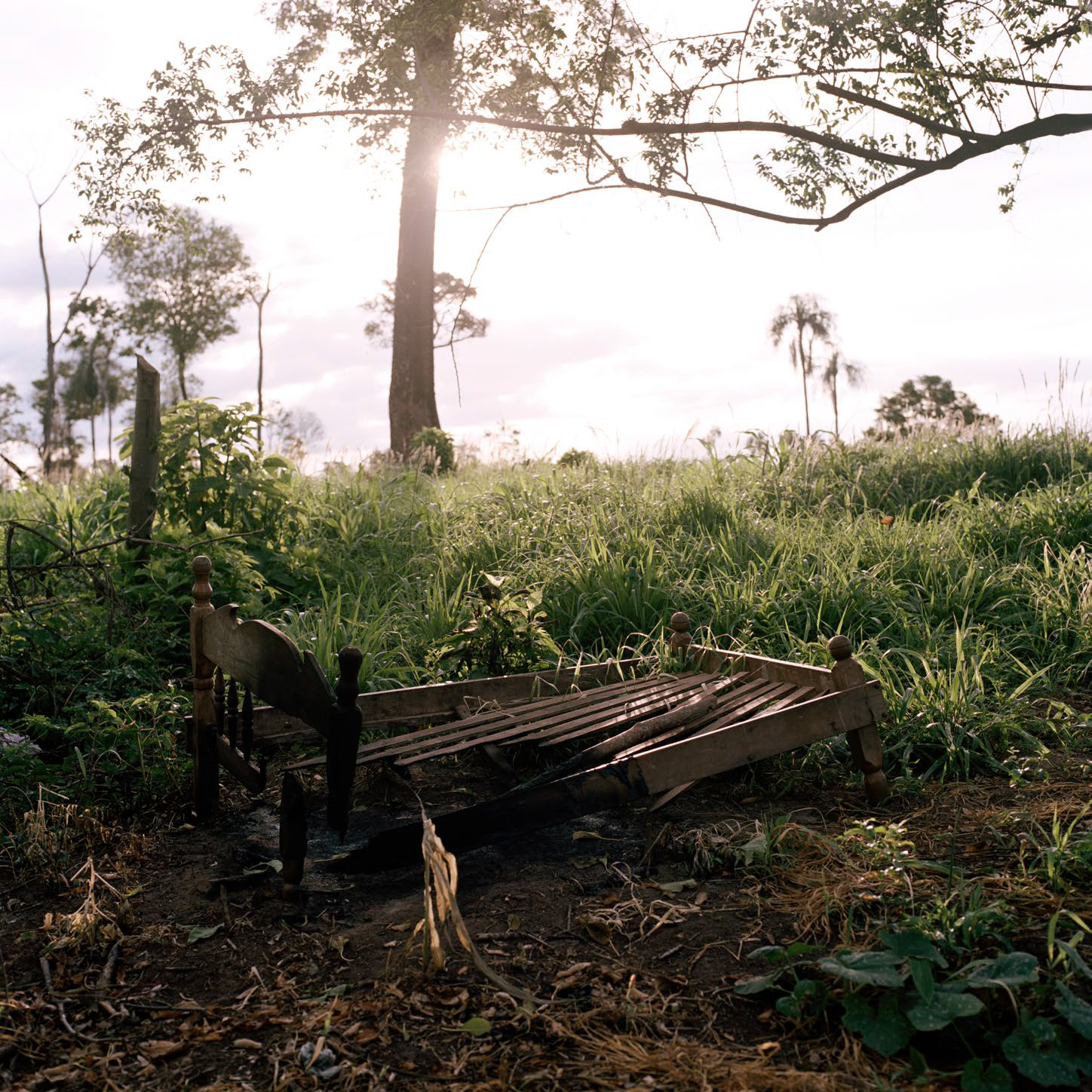 A burned bed in Guayaqui Cuá. 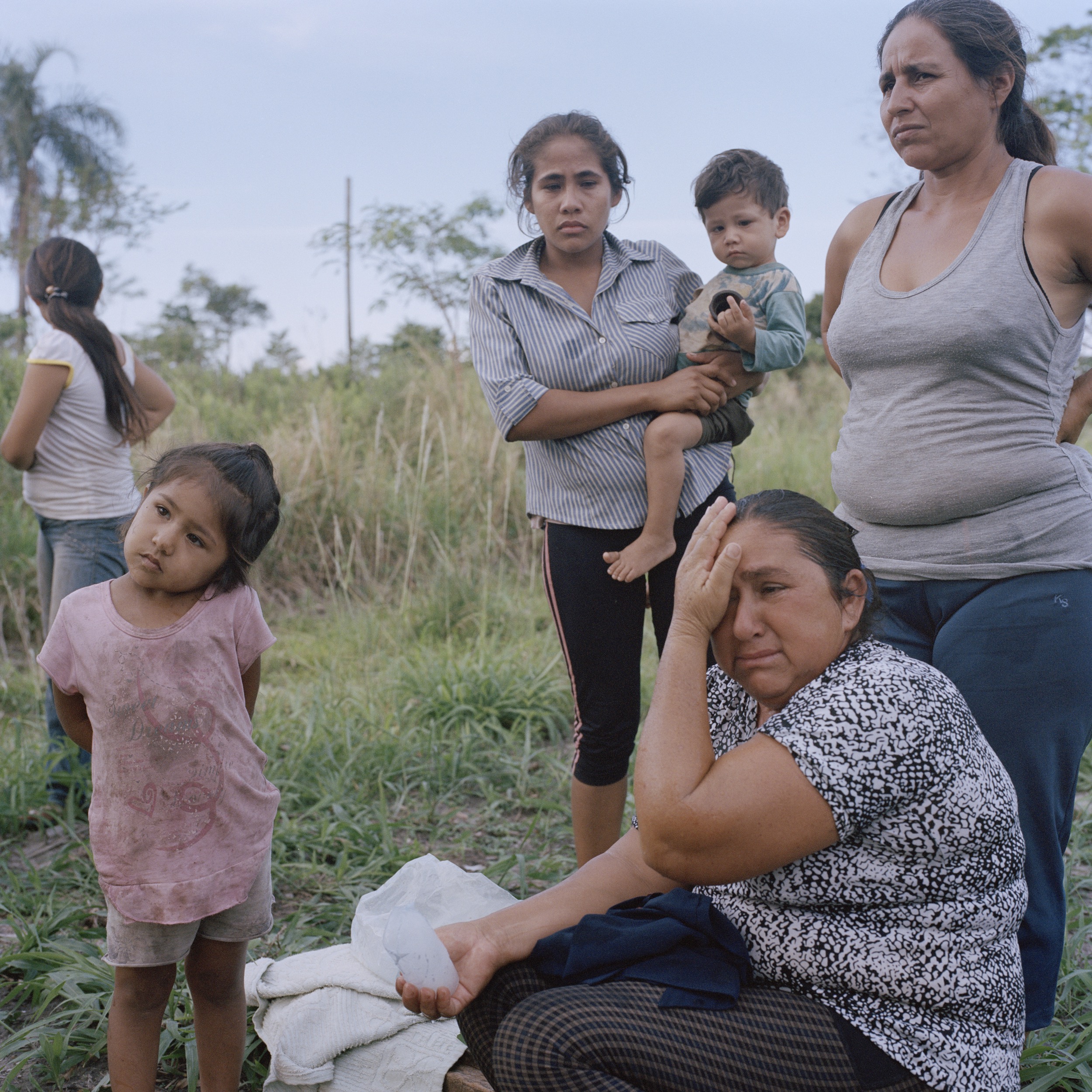 Like everyone else from Guayaqui Cuá, who were its legal occupiers, María has nowhere to go. It’s a story all too common in this part of the world, as an agricultural export boom has increased the value of land and peasant communities like María’s are being squeezed out by powerful farmowners. Despite having the law on their side, the government usually protects the big money rather than the peasants – who have little chance of reclaiming their land.

This was just one of many dismal scenes observed by Spanish photographer Jordi Ruiz Cirera, who travelled through Paraguay and Argentina over three years, to document the impact of the global food supply chain and the rise of agribusiness on local people and the environment.

“We live in a globalised world, so everything is connected: what we eat in Western societies has a huge impact elsewhere, just like clothing, electronics, energy or any other consumer goods we buy,” Jordi explains. “I started this project to explore how interconnected we all are and how choices in one part of the world can have huge effects for others.

“My ultimate goal was to explore how what’s known as the agro-exportive model is changing the landscape and socio-economic fabric. I wanted to see how people are adapting to an evolving reality driven by the global economy, the power dynamics at play, and the inequalities of this system.” 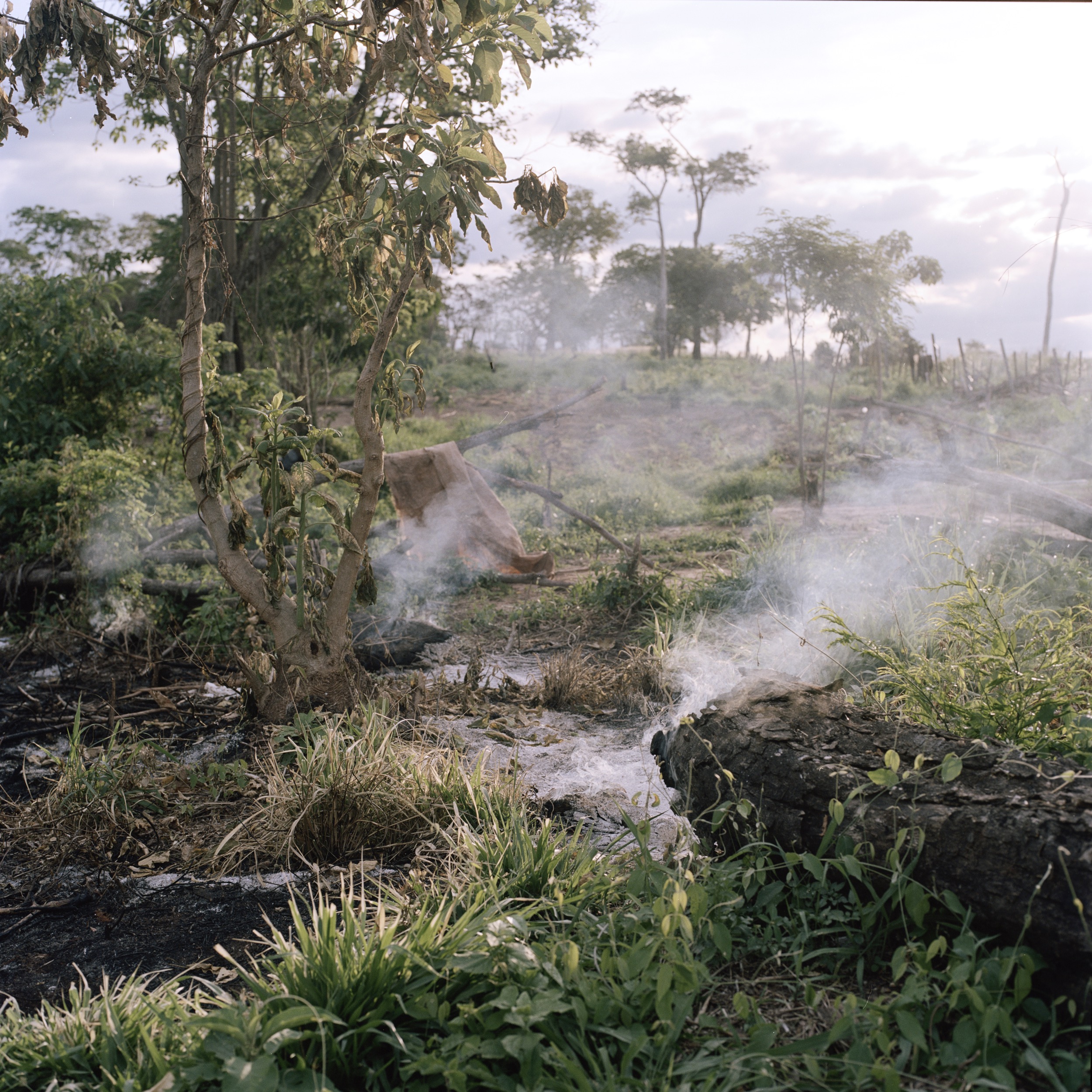 Burned traces of Guayaqui Cuá community after its eviction two days before. 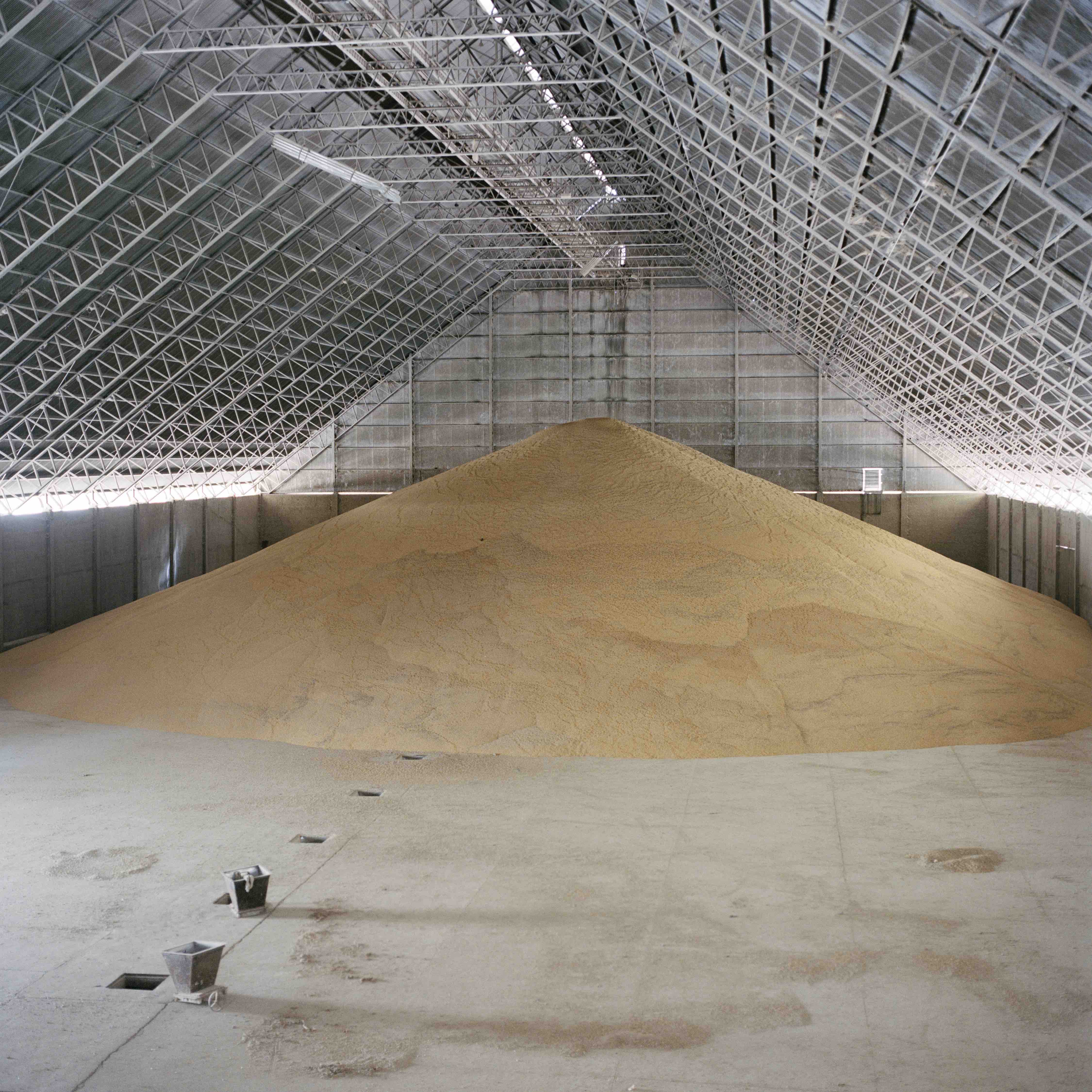 A silo full of corn at Puerto Gical, one of the main ports on the river Paraguay near Asunción.

Latin America’s immensely fertile Southern Cone has become one of the world’s major food producers and soya has emerged as the greatest cash crop, leading the Syngenta Corporation to dub the region the “United Soya Republic”. Mostly exported to China and the EU for cattle feed, in Paraguay, land cultivated for soya has tripled in the last 15 years and fuelled rapid economic growth.

Growth in production has increased the supply of food to the world market and generated considerable profits for large landowners and multinational agricultural corporations. But through working closely with farmers, labourers, activists and their families, Jordi discovered the other side to this agricultural gold rush: rapid deforestation; spraying of pesticides with disturbing effects on human health; conflicts over land between large estate owners, peasants and authorities; and how displacement and forced migration has torn (often indigenous) communities apart.

“Land, and who has the power to control it, is the key issue in this region,” Jordi reflects. “When the production of crops or cattle is so profitable on the large estates, it makes it extremely hard for smaller, family-run plantations to survive. The economic, political and social power balance is extremely unequal, which leaves small farmers essentially powerless. In Paraguay, particularly, farmers were literally fighting against a corrupted system that left them out.” 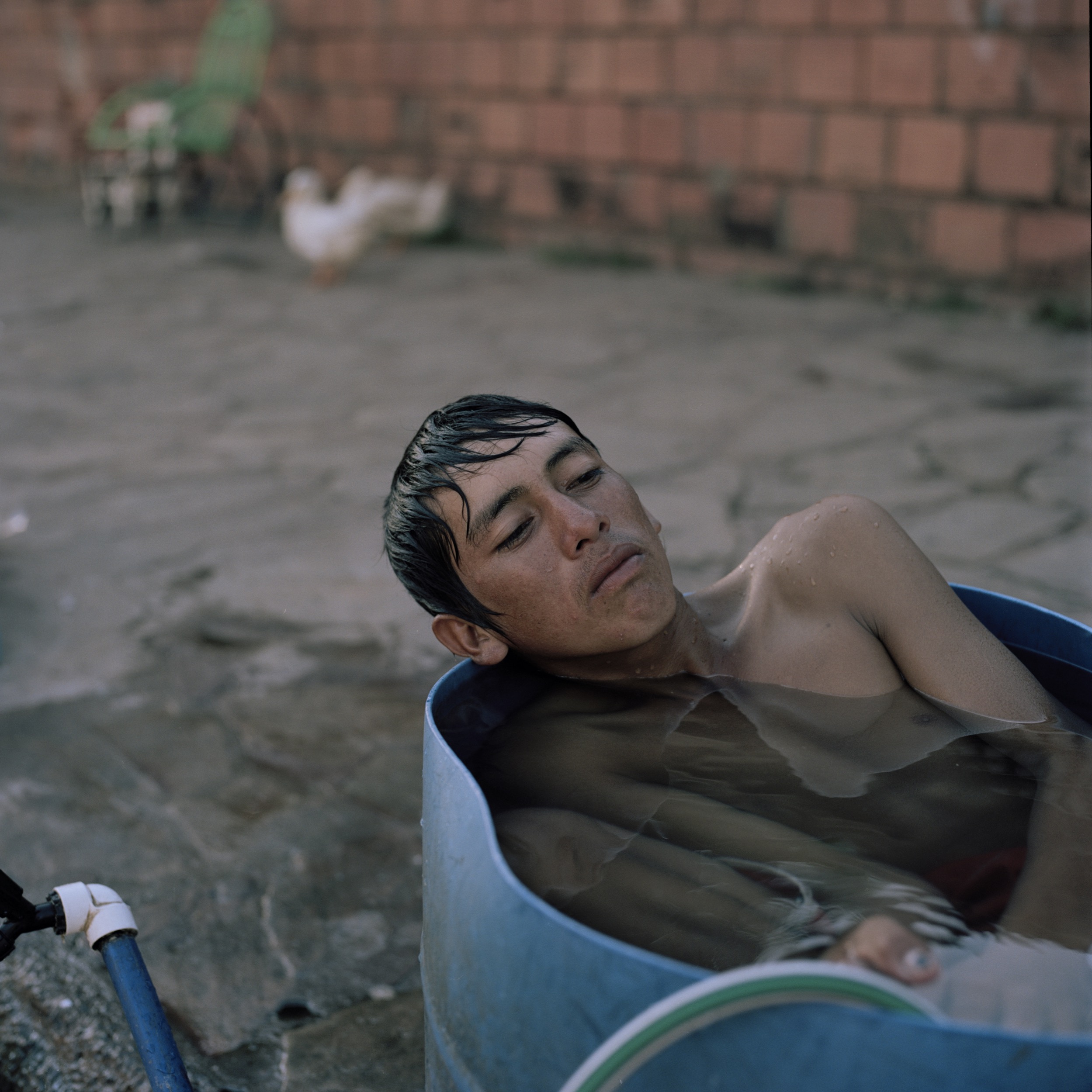 Juan Ramón, 16, takes a bath on a barrel in front of their makeshift home in the streets of Asunción where he has been for eight months together with his family. They were living in the “bañado”, the area surrounding the river until recent floods resulting from El Niño, as well as deforestation due to agribusiness further up the river forced them to evacuate. 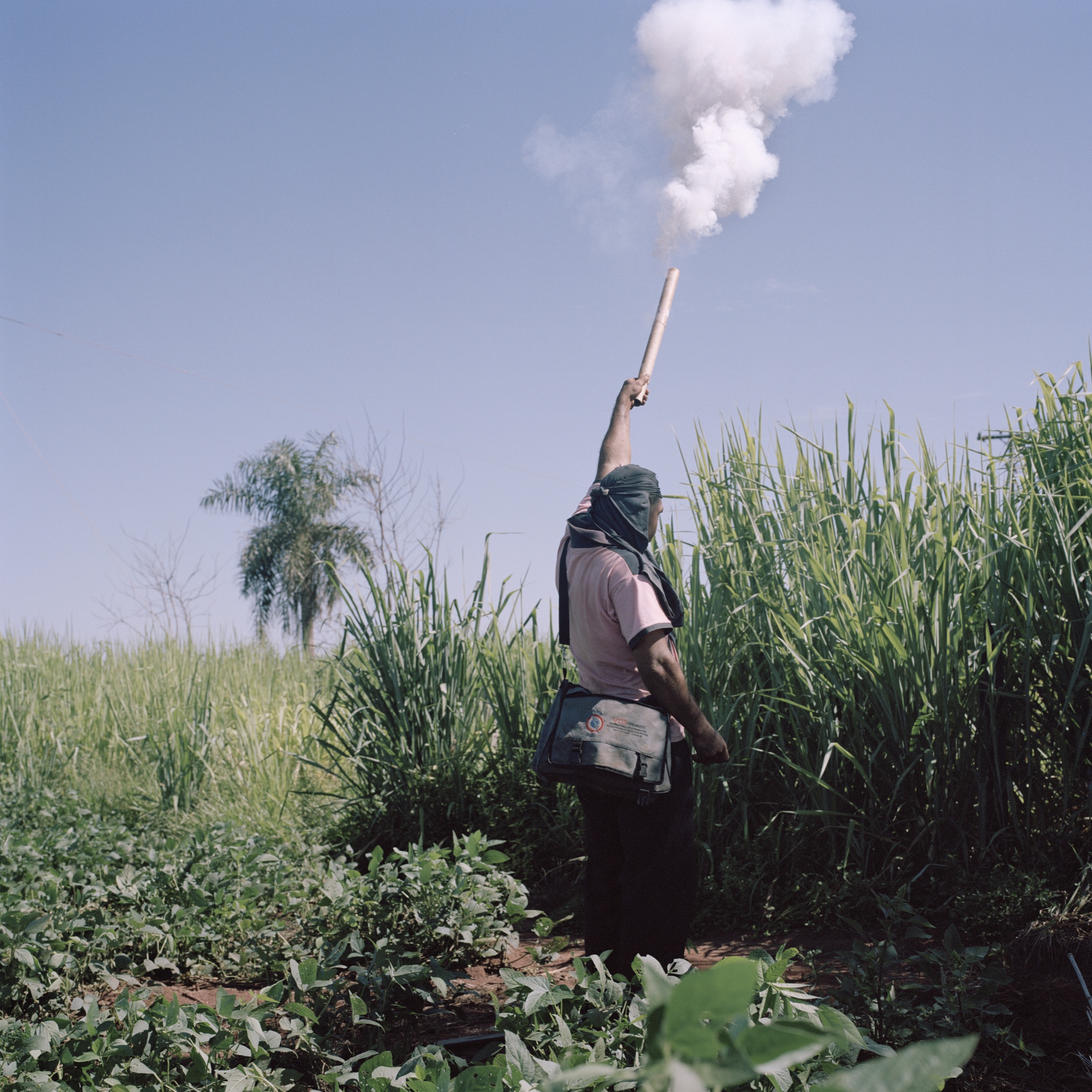 A peasant shots a firecracker to alert the population that a fumigation is happening near the community. Police protected the fumigation and heavily repressed the peasants, leaving several injured.

Land distribution in the Southern Cone is among the most unequal in the world. Argentina’s best land has been controlled by a hand-full of wealthy families for generations and similarly, in Paraguay, just two percent of the population owns 85% of its farm land.

María is left with few options – just like Maximiliano Fernandez, 21, who lives in Aviá Teraí, Argentina. This small town in the northern Chaco province, is home to 6000 people and surrounded by lucrative soyfields – yet doesn’t even have drinking water.

Aviá Teraí is emblematic of neglected towns across the region: a drastic reduction in demand for skilled manpower on the large estates due to mechanisation has created high levels of unemployment and poverty, with few opportunities for the younger generation. With little else on offer, Maximiliano is contemplating joining tens of thousands of others who have left the countryside to seek work in the capital, Buenos Aires. 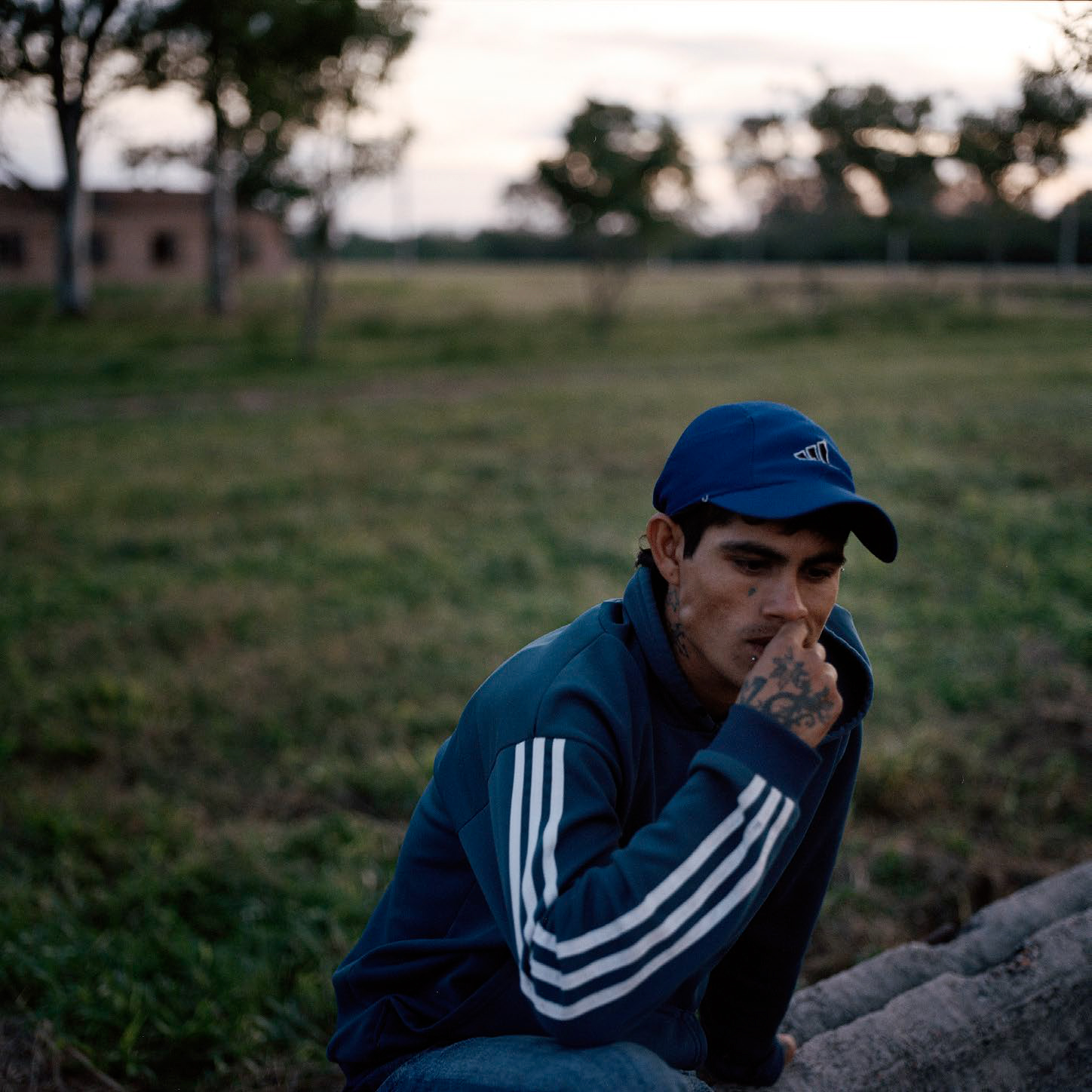 Maximiliano Fernandez, 21, near his girlfriend’s house in Aviá Teraí where he lives with her family. There are few job opportunities in Aviá Teraí but Maximiliano works every now and then in the wood and charcoal industry in more remote areas, and is considering going to Buenos Aires to work, where his brother lives 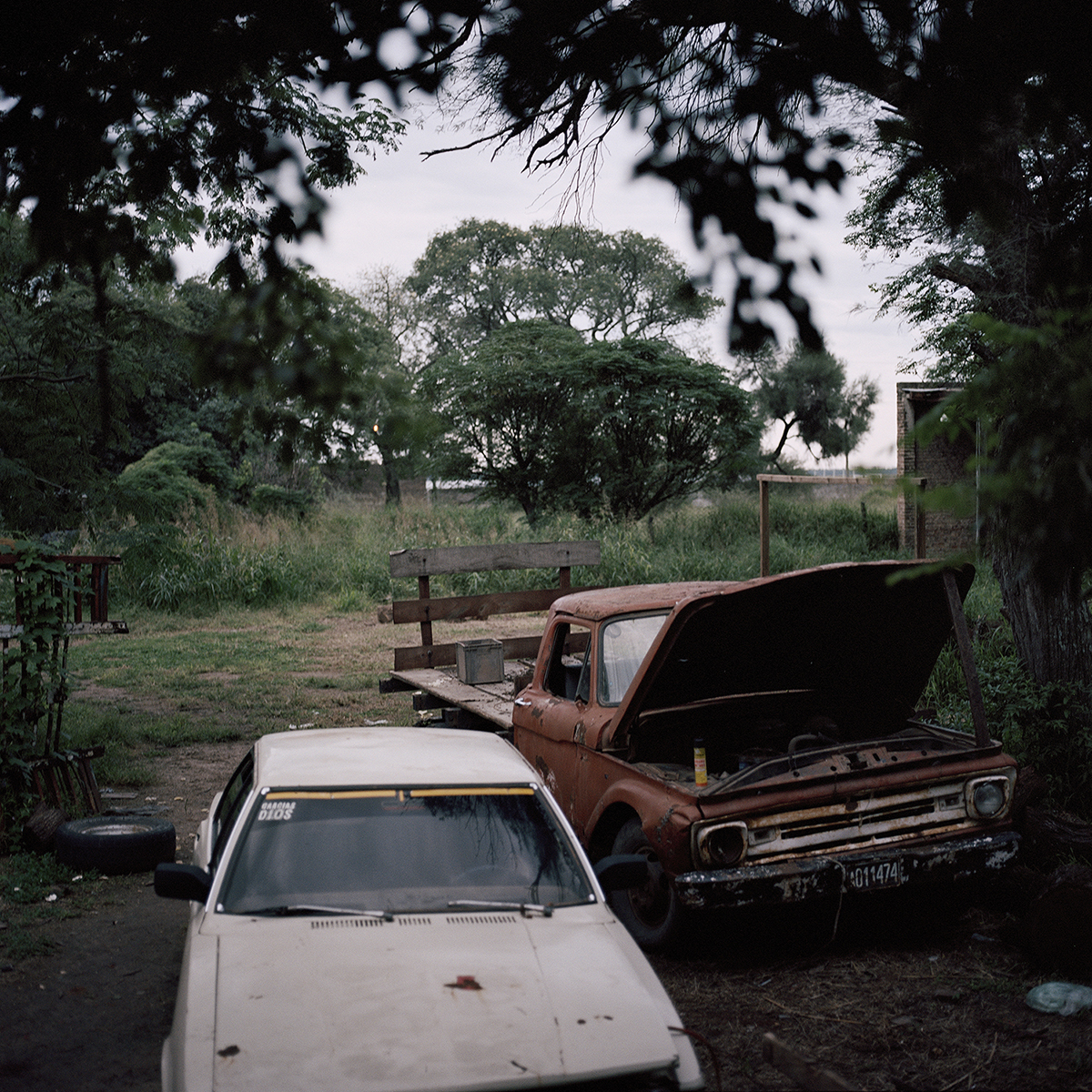 Cars due to be repaired outside a derelict house in Gancedo, Chaco Province.

“They move to the city with the hope of finding better prospects,” Jordi explains. “But displaced people have a very difficult future, leaving the countryside with barely any money or working skills. They often struggle to find an income and end up in poor, over-populated urban settlements, //villas [slums].”

Conditions can be even worse for those who stay in the shrinking and decaying rural towns. Fumigation airplanes used to fly above Aviá Teraí, which has been at the centre of media reports highlighting the alleged health effects of pesticides. Maximiliano’s brother was born with hydrocephaly, an abnormal buildup of fluid in the brain, which his parents blame on the pesticides.

“At the beginning, I really wanted to document the health effects of the pesticides, which were being gravely underreported,” Jordi explains. “During these trips, I’ve met kids born with congenital disorders and seen rural areas with really high incidences of cancer and other blood diseases. Local people blame the spraying, but the link between pesticides and illness remains controversial. It’s extremely difficult to prove cause and effect, especially when there’s so much corporate pressure to say they’re safe.” 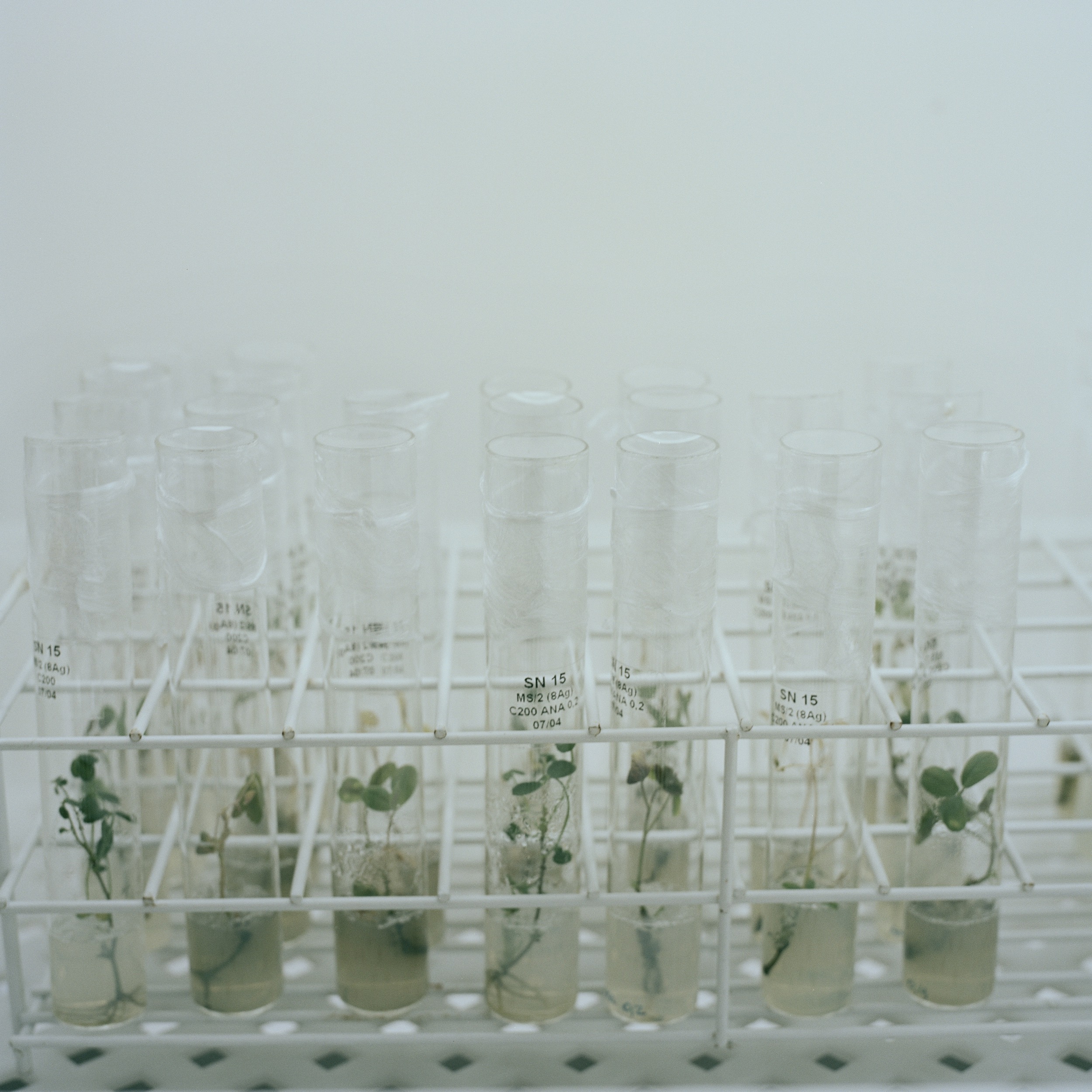 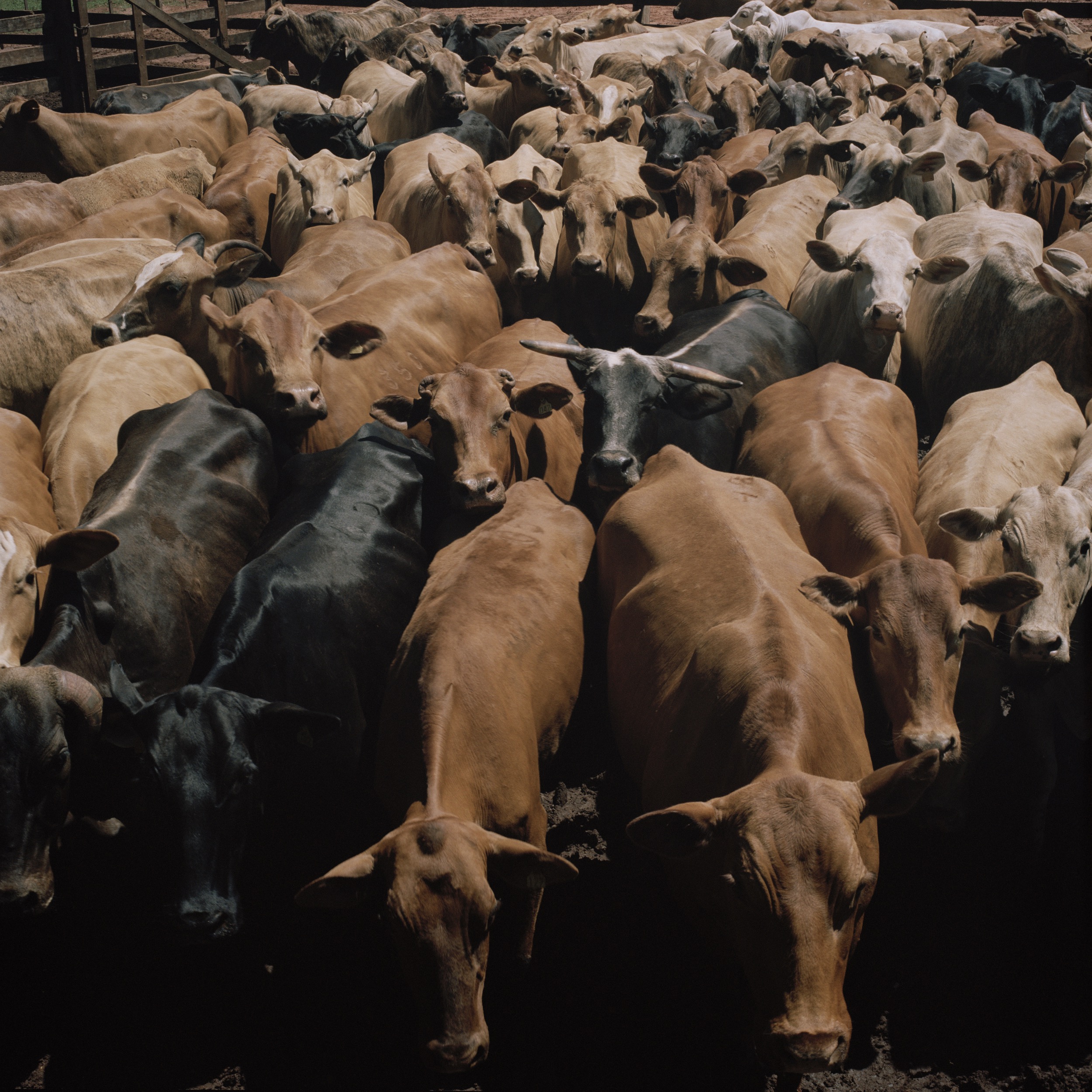 Cows at estancia Santa Amalia, a large estate soya plantation and cattle-ranch farm. Since 2008 an indigenous group has occupied part of the plantation and in 2010 the land-owner was attacked, allegedly by the indigenous, and they were expelled by the police.

Glyphosate, for example, is a powerful weedkiller used in soya plantations, which the World Health Organisation categorised as “probably carcinogenic in humans” in 2015. However, the EU is currently considering its re-approval due to “insufficient evidence” linking it to cancer or environmental damage.

The Southern Cone is at the forefront of the battle against pesticides, damaging agricultural practices and GM farming. While corporate power is often overwhelming, activists can point to a number of important victories.

Grassroots groups like Madres de Ituzaingó challenged soya field fumigation in the courts and for over a decade and eventually brought them to an end. In 2012, Monsanto, one of the largest GM seed producers in the world and a key player in the agrochemical supply chain, announced the construction of a seed treatment plant in Malvinas, Argentina. Activists blockaded the site with a tented camp, pushing the movement against GMO to top of the national agenda, and ultimately succeeded in halting construction.

The picture Jordi documented in the countryside of the Southern Cone was often bleak, but it was the people fighting injustice who gave him hope. People like Rolando Nuñez, the director of the Centro Mandela in Chaco, Argentina, which fights for human rights in the region. “He was probably the most inspiring person I met during the whole project,” Jordi explains. “His life is devoted to his work and he has a tireless attitude, despite having so much against him.”

At his office in the aptly titled Resistencia, Rolando can enthral listeners for hours about the complex problems and human rights abuses that face local indigenous people in this forgotten part of Argentina. But while it’s an uphill battle, he always has energy for the fight. “I get here around 6am and leave at 8pm, the only time I take off is Sunday afternoon,” Rolando says. “There’s just so much to do…”

The United Soya Republic by Jordi Ruiz Cirera is at Francesca Maffeo Gallery, Leigh-on-Sea, until 3rd of June 2017.

Linkedin
RELATED ARTICLES
OTHER ARTICLES
A 28-year-old from Texas was forced to travel across state lines for an abortion that would save her life and end a pregnancy that her baby had no way of surviving.
A young woman recounts her experience of being harassed by anti-choice campaigners as she was seeking an abortion in Glasgow.
One year on from the fall of Afghanistan to the Taliban, Tiara Ataii speaks to those who have been forced to make the treacherous journey to Europe for safety, and the barriers and horrors they have faced.
Tough fines and arrests for drug possession and supply is pushing festival-goers towards unsafe measures to consume or smuggle in their substances.
Susan Pektaş’s new photo series delves into multiple cultural layers of the region with a touch of personal mysticism.
In the latest instalment of Photographers in Conversation, the creator talks portraiture, platforms and taking inspiration from Little Simz.