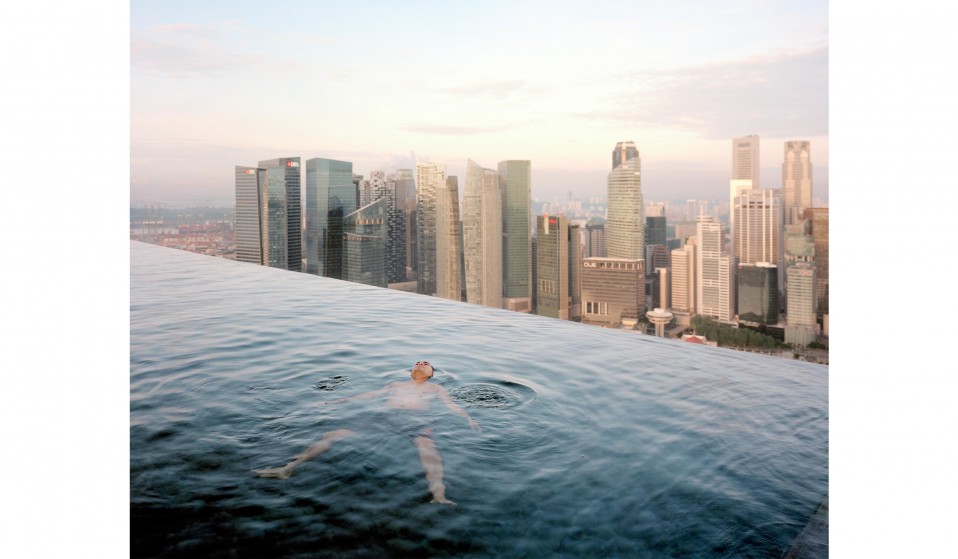 Paolo Woods reveals how he and Gabriele Galimberti found a way to expose the absurdity of our global economic system.

Tax havens are a secretive abyss, purpose-built to benefit multinational corps and confuse the average Joe. Paolo Woods reveals how he and Gabriele Galimberti found a way to expose the absurdity of our global economic system.

“Haiti is the poorest country in the Americas and one of the poorest in the world. I had been living there for four years when my long-time friend Gabriele Galimberti came to visit in 2012. He’d just had a really good year as a photographer but was amazed when the Italian government took over fifty per cent of his earnings. As we were in the Caribbean, he joked about moving to the Cayman Islands, just across the water, to hide his money. We realised we didn’t know anything about tax havens except the usual clichés – we had no idea how they worked. Can you just hide your money there as an average Joe? We started becoming curious.

“The general public have an impression that tax havens do illegal things, but that’s not the case. A lot of what happens can be illegal, but the vast majority is absolutely legal. It might not be moral but it is legal. This is at the heart of the way a globalised economy works. We’re all involved. You’re involved when you buy something at Ikea or Amazon, I’m involved when I open a Swiss bank account, or whatever.

“We wanted to understand how the tax haven system works, who the central people are. Nicholas Shaxson’s Treasure Islands was an invaluable resource to get us started and we’re proud to have collaborated with him on our book. Getting access to these places has been extremely difficult. You’re not dealing with gangsters or mafia kingpins like some people imagine – they’re perfectly legal business people – but they’re very conscious of the bad press the “tax optimisation industry” has received. It’s a system put in place by large multinationals for their own interests, but activists have argued it favours illegal operations, corrupt dictators and organised crime because it’s so opaque – it operates without transparency. 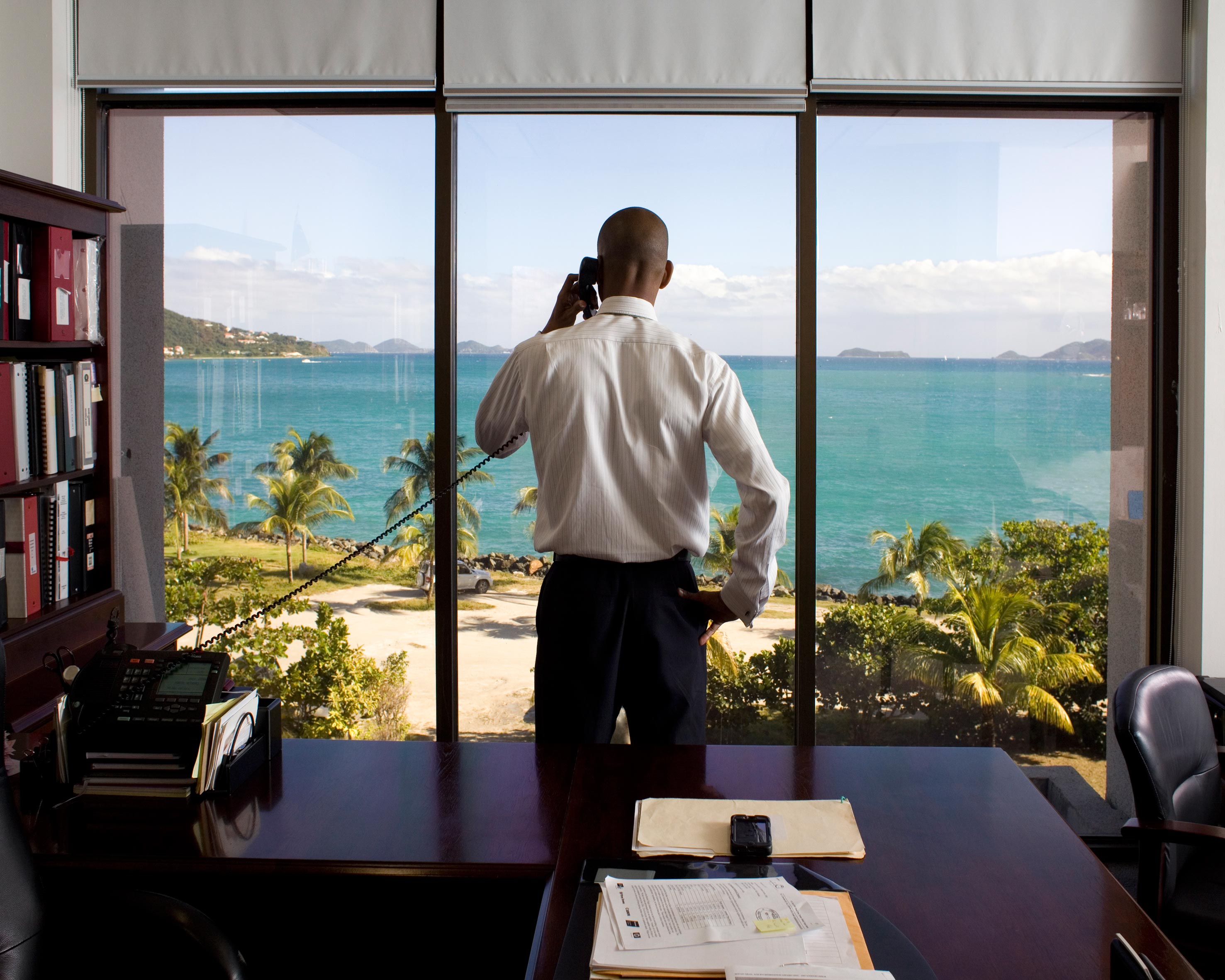 British Virgin Islands Finance Secretary Mr. Neil M. Smith in his office. There are more then 800,000 companies based in the BVIs but only 28,000 inhabitants.

“As a photographer, I’m really interested in trying to represent things that aren’t easily visible. Three months after Gabriele’s joke in Haiti we made our first research trip to George Town in the Cayman Islands, but we didn’t know if there would be anything to photograph. Tax havens are not James Bond kind of places like we imagine. Very often they’re extremely boring and banal – grey offices with nothing really happening. Translating that into images can be difficult, so having four eyes working was much better than two. Each photograph was a collective decision.

“We decided early on not to work in the language of classic humanistic photo-reportage. Instead, the glossy brochures of the financial industry were our main reference and the book is structured like a company’s annual report. We showed the world as they wanted it to be shown – shiny, beautiful, smiley, wealthy – but we tried to add another layer of meaning. We also opened a company, The Heavens LLC, in Delaware. It’s based in the same mailbox office as Apple, Bank of America, Coca-Cola, General Electric, Google, and 285,000 other companies. 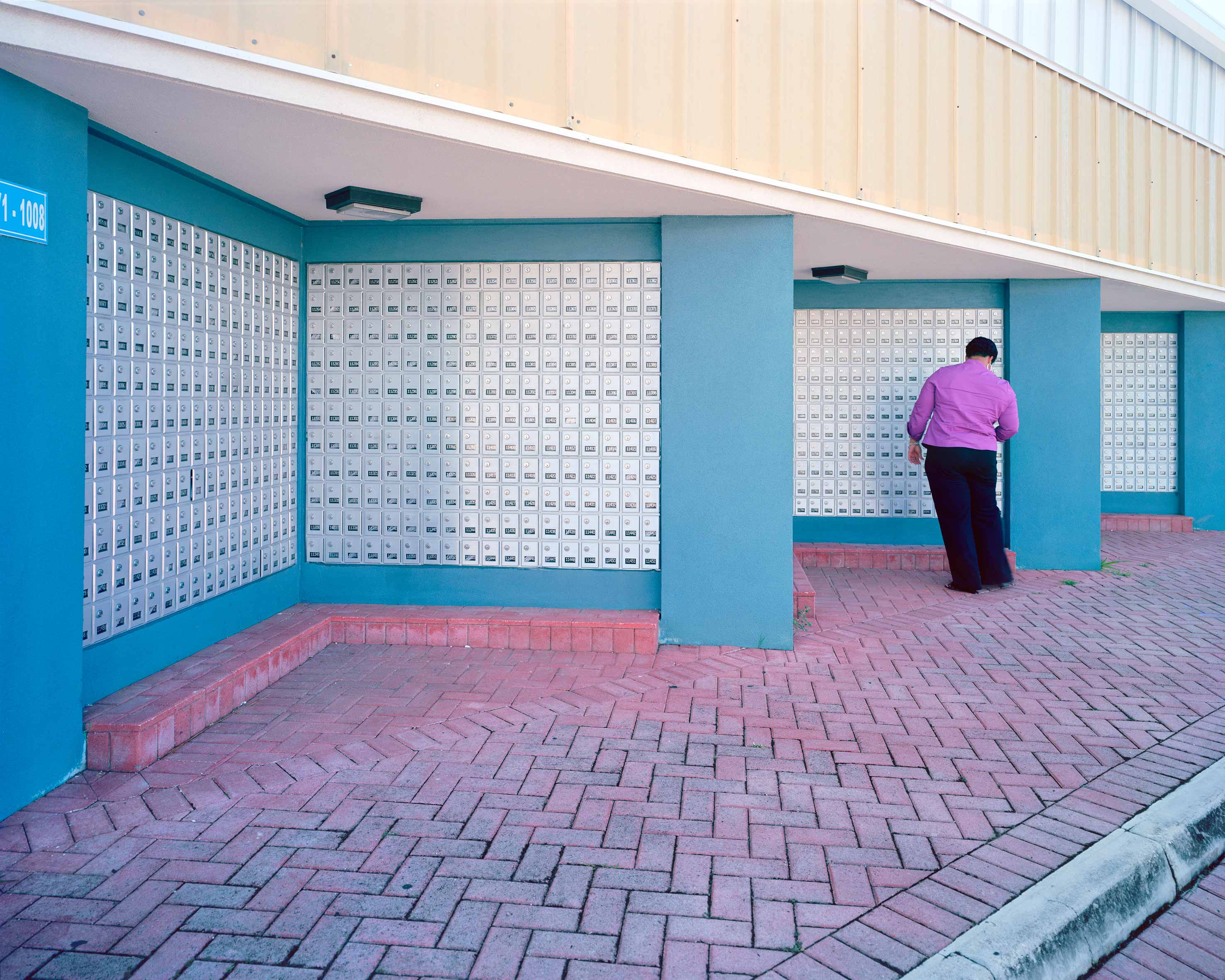 The Cayman Islands has twice as many companies based there as there are citizens. Many companies have a post office box but no office.

“Years ago when you went into a car factory, you knew they were producing cars there. Now, when I go into offices where thousands of people work for a financial institution, it’s complicated to understand what they’re actually producing. There is no physical money. It passes through the British Virgin Islands, the Caymans and Bermuda, but it doesn’t stop there. Humour is useful to highlight the absurdities of the system and the book is a testimony to this world and the way it works.

“One time, we were in Singapore Freeport – where enormous private fortunes are sealed away. Through legal means you can put whatever you want there and you don’t have to declare it. We were three floors underground in this hyper-secure building overflowing with billions of dollars – gold, diamonds – and one of the managers told us, “There’s more art in this place than the Uffizi museum.” These underground windowless chambers, filled with works of art from Van Gogh and Caravaggio that nobody ever sees, is a good metaphor for how opaque and secret the whole tax haven system is. 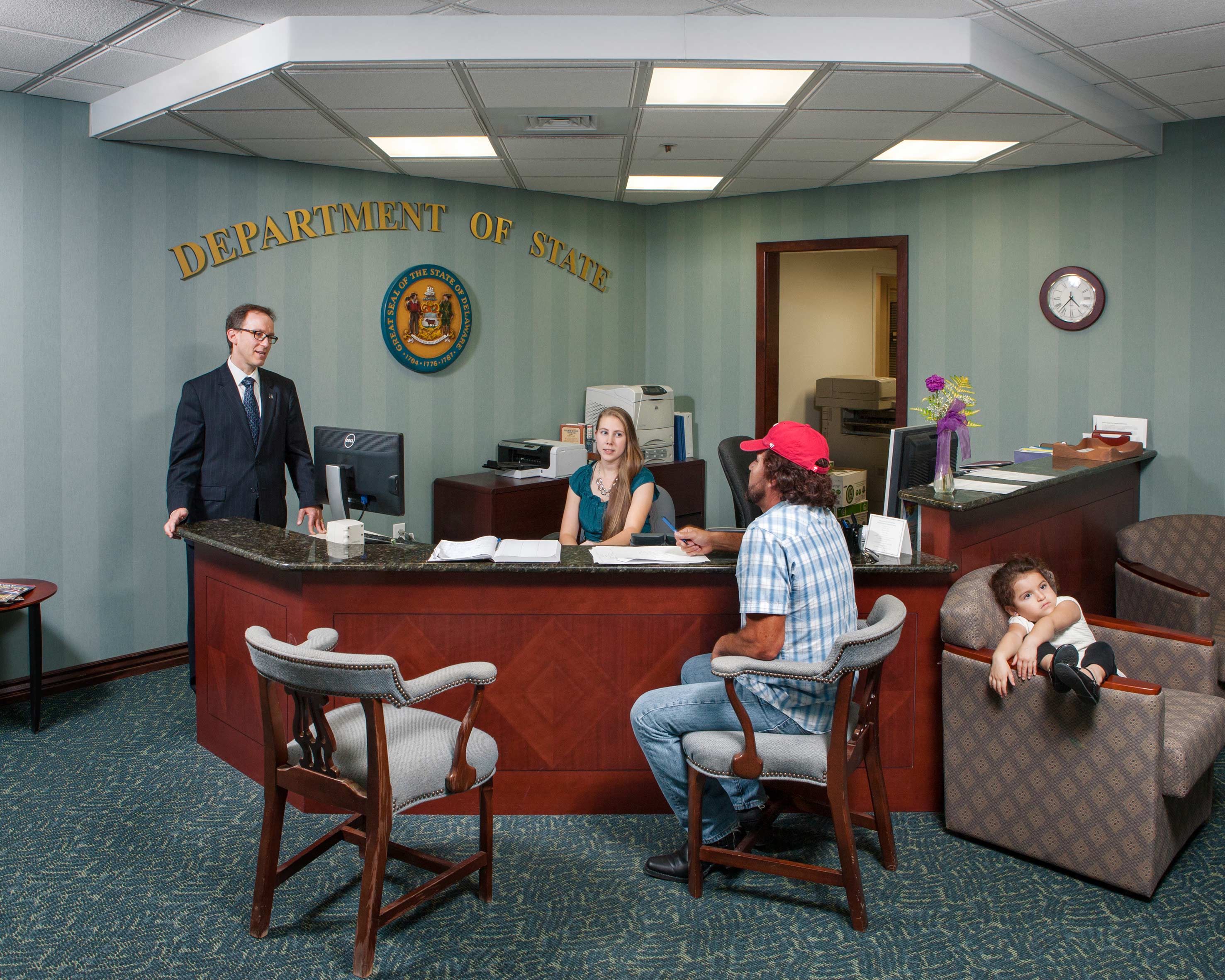 Richard J. Geisenberger (standing), Chief Deputy Secretary of State for Delaware, where more than 50% of all US publicly traded companies and 63% of the Fortune 500 are incorporated.

“When The Heavens premiered, the comment we got the most was ‘thank you’, like we had revealed something people didn’t realise was happening. Extraordinary books like Nicholas’  tend to be read only by the converted, but our greatest ambition was to bring other people into the conversation. Photography can be powerful in revealing complex, multi-dimensional issues like tax havens, but it has to be used in imaginative new ways. Too often photography is used in a traditional way, just pointing cameras towards the horrors of the world. That is not the only way photography can bring understanding. Photography should be employed in revealing our world, its challenges and the new ways we interact.”

The Heavens: Annual Report is published by Dewi Lewis. Grab a copy for the reduced price of £35 from the Huck shop.

To find out more, check out TheHeavensLLC.com. Interview by Alex King.

Linkedin
RELATED ARTICLES
OTHER ARTICLES
Proponents of personality tests argue that they’re necessary to find the best person for the job – but in practise, they’re often discriminatory.
Meg Handler’s photos capture diverse groups of New Yorkers coming together for the collective cause of civil rights.
Ireland’s national sports are modernising. At the forefront of this movement is Na Gaeil Aeracha, the country’s first ever queer GAA club.
In North Carolina, people are living near to Duke Energy’s Belews Creek Steam Station, where toxins are pumped into the air, water, and soil.
Alternating between colour and black-and-white, the photographer chronicled sexual liberation, economic crises and the repercussions of the war in Vietnam.
Jack Lueders-Booth reflects on capturing the community that lived and worked along the city’s busiest railway route during the 1980s.